Non-inferiority design has been deployed in a growing number of surgical clinical trials. It is the optimal choice for investigating new surgical procedures which may not present significant clinical superiority but offers certain advantages such as increased cost-efficiency, ease of operation, and reduced invasiveness (1). To date, a few surgical novel techniques, such as the robot-assisted and laparoscopic procedures (2,3), have been recommended by official guidelines based on the findings of non-inferiority trials.

Concluding non-inferiority is based on comparison between confidence intervals of treatment effects and pre-defined and clinically acceptable margins, known as non-inferiority margins. One of the most challenging points in non-inferiority design is margin justification since it should balance both clinical and statistical perceptions (4). Theoretically, the probability of establishing non-inferiority should be independent from pre-specified parameters except for the type II error (β) or statistical power under the alternative hypothesis. However, there have been wide-spread concerns regarding the validity of established non-inferiority, especially on account of the arbitrary definition of non-inferiority (5), where biases could stem from (6,7). An earlier systematic review found that even in high-quality journals, non-inferiority design of clinical trials was reported inconsistently and did not follow official recommendations (8). Biased findings of non-inferiority, if approved by guidelines, could potentially mislead surgeons in clinical decision-making and eventually result in patients receiving inferior surgical treatments. However, quantitative evidence is still lacking, leaving this issue unsolved.

To determine the existence of bias, we explored the external factors that influence the establishment of non-inferiority by systematically surveying and analyzing the characteristics of published surgical clinical trials.

We present the following article in accordance with the PRISMA reporting checklist (available at https://dx.doi.org/10.21037/atm-21-2626).

Databases including MEDLINE, Embase, and the Cochrane Central Register of Controlled Trials were systematically searched (last update on 27 April 2020, detailed strategy presented in Table S1) with a limitation to publications in the English language. The search was restricted to clinical trials in MEDLINE and Embase. The registry identifier and references of included studies were also cross-checked for additional trials.

All retrieved records were screened by two reviewers (C.S. and B.H.). We included non-inferiority trials that investigated surgical procedures of treatment purposes in at least one treatment arm based on the recommendations from the PubMed queries (9), and excluded trials regarding the diagnostic, cosmetic, and obstetric procedures (10). The inclusion criteria were as follows: completed or ongoing trials with published results; trials aiming to prove non-inferiority of a new treatment (procedure, technique, material, and so on) to a conventional one, and at least one treatment was surgical related; trials reporting whether the non-inferiority was established. For multiple publications with the same registry identifier, only the one reporting the ultimate findings of the primary outcome was included. Subgroup and post hoc analyses were not eligible. Any discrepancies were solved by discussion with a senior surgeon (J.Z.) and an epidemiologist (D.Y.).

We performed descriptive analysis for the extracted general characteristics. In particular, categorical variables were expressed as frequencies, while median and inter-quartile range (IQR) were used for continuous variables. We performed Pearson’s Chi-square (χ2) tests and Mann-Whitney U tests to compare the differences of distribution patterns of categorical and continuous characteristics, respectively, between trials with and without establishing non-inferiority. A 2-sided P value <0.05 was considered as an indicator for significant association between a certain factor and establishment of non-inferiority. Since the probability of establishing non-inferiority should theoretically only be dependent on the type II error (β) under the alternative hypothesis, any other external factors associated with establishment of non-inferiority would imply potential bias. Notably, to model the effect of non-inferiority margin on reported outcome of non-inferiority, we first transformed margins expressed as rate difference to RRs based on the baseline outcome event rate. With regard to studies using continuous effect estimates such as mean differences as the primary outcome, we standardized the effect estimates with the reported standard deviations (SD), and then transformed the continuous estimates to ORs following the Hasselblad and Hedges’ method (11,12). A previous study had shown that HRs, ORs, and RRs can be good numerical approximations of one another (13). Therefore, we took the coefficient scale of log-transformed relative effects (HRs, RRs, and ORs) and investigated their association with ultimate establishment of non-inferiority.

A total of 3,312 records were retrieved from the aforementioned three databases. After reviewing titles and abstracts, 746 records were identified for in-depth full-text review. Through cross-checking the trial registry identifier and reference of eligible studies, we enrolled 3 additional studies. At last, 347 non-inferiority surgical clinical trials were included in our study. The flow chart of study selection is presented in Figure 1. 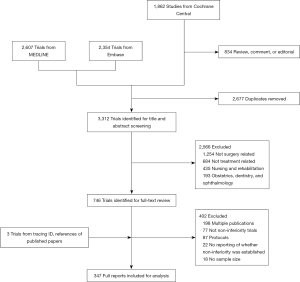 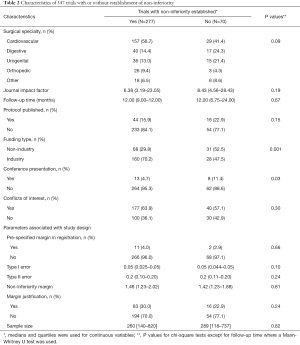 Multiple studies have investigated the design, conduct, and interpretation of surgical non-inferiority trials and highlighted the deficiencies such as arbitrary selection of margin and poor quality of reporting (14,15). These studies, however, have only focused on a subspecialty, such as surgical oncology, and were therefore limited by small number of included trials. Therefore, we performed a systematic bibliometric analysis which summarized 347 previously published non-inferiority phase II and III surgical trials.

To our best knowledge, this is the first effort that quantitatively assessed factors associated with findings of published non-inferiority trials in surgery. We identified industry funding and conference presentation as potential sources of bias in surgical non-inferiority trials. We detected significant industry sponsorship bias which led to the excess establishment of non-inferiority in existing surgical clinical trials, resonating with a previous systematic review which included trials from all disciplines and found that industry-funded trials were more likely to use non-inferiority designs and report “favorable” results (16). To improve transparent reporting, funding sources should be clearly reported both in the trial registration record and the ultimate publication. If an industry-funded trial chooses a product from competing companies as the control arm, a specified statement should be added as part of the competing of interests. We also found that underreporting of trial design and trial results prior to the ultimate publication of trial findings was associated with higher probability of concluding non-inferiority. Based on our findings, conference presentations should be encouraged as it might help preventing possible post-hoc distortion to the original study design. In addition to these biases, it is worth noting that our study focuses on randomized controlled trials, which may have limited generalizability. Non-inferiority achieved by existing surgical trials should be further validated in the real-world settings due to potentially diverse population (17).

Although no association was observed between surgical specialty and establishment of non-inferiority in our study, potential bias could have been generated, which merits further investigation. In particular, among all included trials of our study, 186 (53.6%) trials investigated cardiovascular and peripheral vascular surgeries, and 57 (16%) trials investigated general surgeries. A prior cross-sectional survey focusing on all types of surgical trials reported that general surgery accounted for the largest proportion (34.5%) of all published surgical trials (10). Our findings indicated that non-inferiority design might be more commonly adopted in trials of cardiovascular surgeries. In our study, 119 (34.3%) trials focused on comparisons across different types of coronary stents. Whether these trials adopted non-inferiority design in order to chase higher probability of achieving favorable outcomes, and what role funders played in selecting this type of study design remain unclear, and therefore are yet to be explored in-depth by future research.

The main limitation of our study is that we only enrolled published trials which were indexed in databases such as MEDLINE, Embase, and Cochrane Central which led to omission of unpublished data.

In summary, we systematically analyzed previously published non-inferiority trials in surgery and identified potential biases in such type of trials. Based on our findings, future trials should continue to improve transparent reporting of potential conflicts of interests especially the funding sources. In addition, trials are encouraged to be presented in conferences to increase visibility and to some extent prevent post-hoc manipulation of the study design. Last but not the least, trials should be registered with full details of study design in registries such as Clinicaltrials.gov, or publish these details in the protocol.

We thank Dr. Xia Shen for providing consultations to the statistical analysis, and as well as Dr. Thomas Forbes for the clinical guidance.

Reporting Checklist: The authors have completed the PRISMA reporting checklist. Available at https://dx.doi.org/10.21037/atm-21-2626

Conflicts of Interest: All authors have completed the ICMJE uniform disclosure form (available at https://dx.doi.org/10.21037/atm-21-2626). The authors have no conflicts of interest to declare.