Amyotrophic lateral sclerosis (ALS) is a syndrome characterized by progressive degeneration of neurons in the motor cortex, motor nuclei in the brainstem, and anterior horn cells of the spinal cord. Peak age at onset is 47-52 years for familial patients and 58-63 years for sporadic patients (1). About 50% of patients die within 30 months of symptom onset and about 20% of patients survive between 5 and 10 years after symptom onset (1). However, the clinical presentation, age of onset and progression of ALS varies considerably. Juvenile onset ALS is a very rare form of motor neuron disease, with the first symptoms of upper and lower motor neuron degeneration manifested before 25 years of age. Juvenile ALS is more frequently familial in nature than the adult-onset forms. Mutations in the ALS2, SETX, or SPG11 gene are known to cause familial ALS with juvenile onset and slow disease progression (2). A few sporadic cases of juvenile ALS with unusual and unexpected rapid progression have been reported (3-7). Here we reported two apparently sporadic ALS with juvenile onset and aggressive progression caused by mutations in the SOD1 and FUS gene.

Patient 1 was a female manifested with weakness in her right foot at the age of 22. Over the subsequent 10 months, his weakness progressed quickly to involve proximal muscles of right lower limb, and then left leg. She required a walking stick, and could not walk more than 300 m. On examination, cranial nerves were intact. There was global muscle weakness and atrophy of the right leg, and mild muscle atrophy in the left leg. Deep tendon reflexes were brisk in upper limbs and decreased in lower limbs. The Babinski sign was present in the right side. Neurophysiological examination demonstrated chronic and active denervation in the lower limbs, as well as denervation potentials in the thoracic muscles. His parents did not present any symptoms at their 50s. An extensive inquiry showed no family history for any neuromuscular disorders. Genetic examination for the patient revealed the heterozygous c.252G > C (a p.L84F) mutation in exon 4 of the SOD1 gene (Figure 1A). The patient died 34 months after onset. 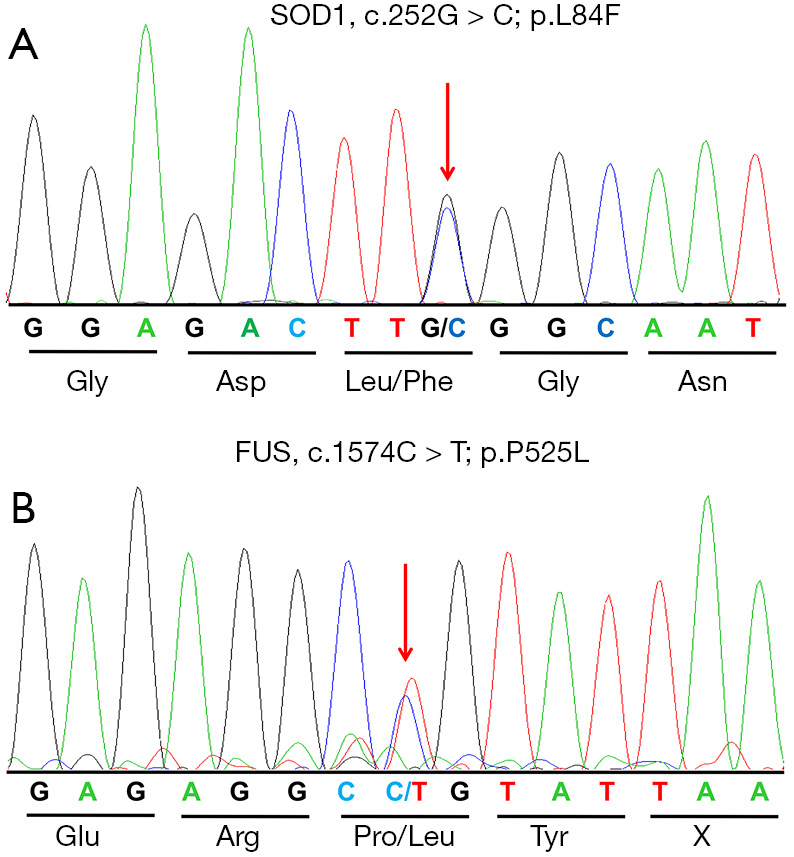 Patient 2 was a 13-year-old boy who presented with 4 months of weakness of right leg. One month after onset, weakness progressed to right arm. Weakness of his right limbs progressed so rapidly that he could hardly walk independently for 50 m, or left his arm. Physical examination revealed obvious atrophy of muscles of right arm and leg. Muscle strength of right limbs were grade 4. The deep-tendon reflexes were hyperactive in all limbs, with bilateral positive Babinski sign. Electromyography demonstrated widespread denervation in the lumbar, thoracic, cervical, and sternocleidomastoid muscles. Both his parents were healthy at their 50s. There was no history of neurologic diseases in her family. Gene test for the patient revealed the heterozygous c.1574C > T (p.P525L) mutation in the FUS gene (Figure 1B). The patient died 23 months after onset.

Juvenile ALS are often familial ALS and caused by mutations in the ALS2, SETX, and SPG11 gene, which showed a very slowly progressive, nonfatal pattern (2). However, both juvenile ALS patients in this report had an aggressive progression, with no obvious familial history. Extensive literature review revealed 17 juvenile sporadic ALS patients of both Caucasian and Asian origin with known mutations, 1 had SETX mutation (8), 3 carried SOD1 mutations (3-5) and 13 had FUS mutations (6,7,9-14) (Table 1). Almost all these juvenile cases experienced aggressive progression, with a short disease duration ranging from 6 to 22 months except the SETX mutation carrier (Table 1). The FUS mutations harbored by juvenile sporadic ALS patients were frameshift mutations, nonsense mutations, and p.P525L mutation. P525L mutation, which have been consistently associated with a phenotype of earlier onset and severe course, was identified in 7 juvenile-onset sporadic ALS patients (Table 1) and 5 juvenile familial ALS patients (7). Truncating mutations in FUS has also been shown to cause a more aggressive ALS phenotype (15). Interesting, two deceased affected members in two p.L84F mutated pedigrees also presented with juvenile onset, rapid progression and short duration (16). These findings suggested that mutations in the SOD1 and FUS gene, particularly the p.P525L mutation, are associated with juvenile-onset ALS with rapid progression and short survival. 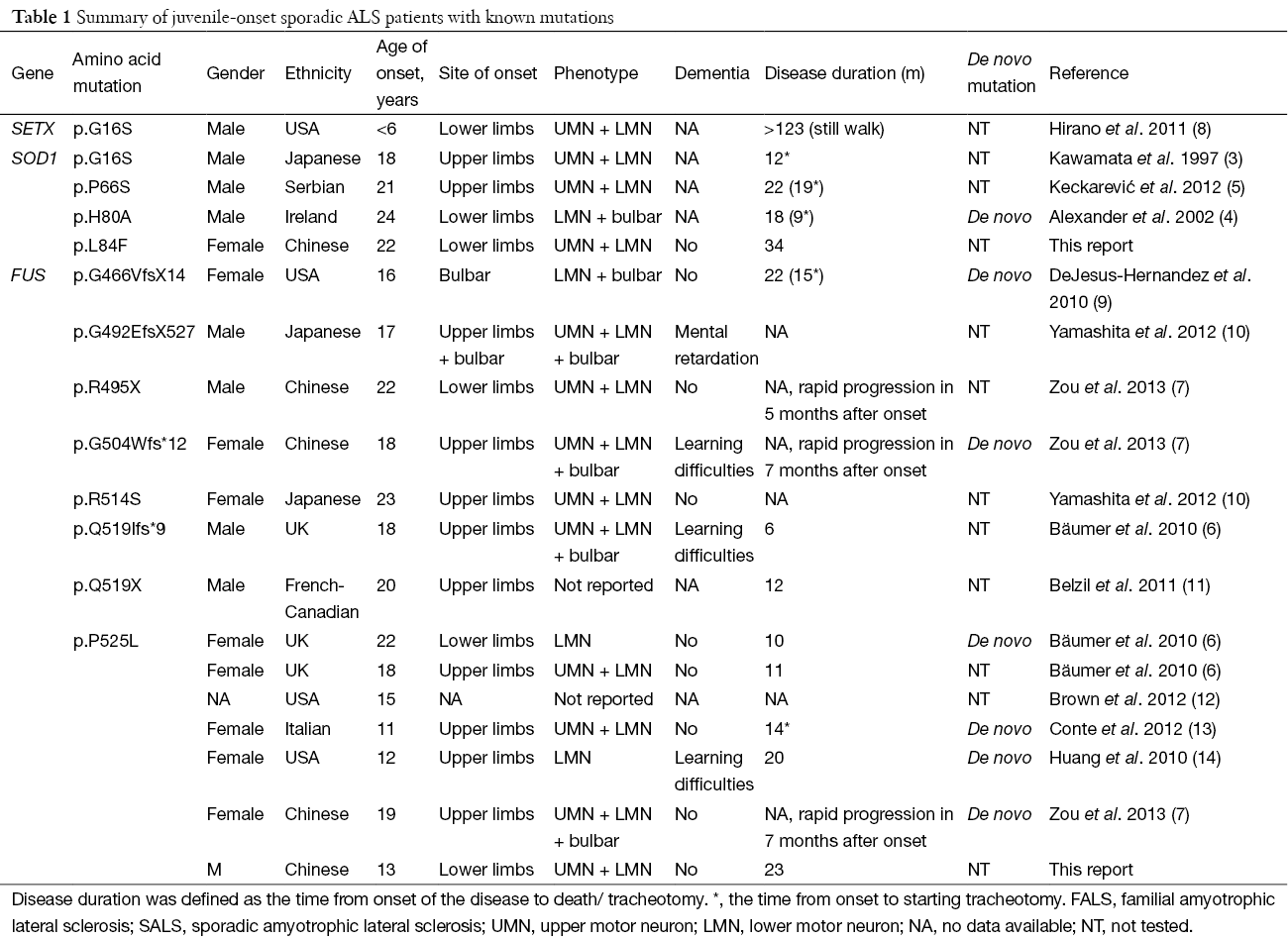 Low or incomplete penetrance has been reported in SOD1 and FUS mutations, making it difficult to distinguish between familial patients with reduced penetrance and true sporadic patients (17). However, among the reported juvenile ALS cases, 7 patients have been proved to carry the de novo mutations (Table 1), supporting that de novo mutations are responsible for at least a proportion of sporadic ALS patients. Although we could not perform genetic tests for the parents of both patients because of the paucity of DNA sample, they were still in good health at their 50s and had no family history of neurologic disease, suggesting that both patients were sporadic ALS.

Our findings, together with other researches, confirm that both SOD1 and FUS mutations can lead to juvenile-onset malignant form of ALS and should be screened in ALS patients with an earlier age of onset, aggressive progression, even if there is no apparent family history.

Conflicts of Interest: The authors have conflicts of interest to declare.