Effect of growth hormone on thin endometrium via intrauterine infusion

Infection and intrauterine manipulation are the most common pathogenic factors for a thin endometrium, along with age and medication. There are many ways to treat thin endometrium, including aspirin, purified menstrual blood stem cells, pelvic neuromuscular electrical stimulation, sildenafil, stem cells, and colony-stimulating factor (5,6), however, these methods have weak effects. More effective treatments are still needed.

Growth hormone (GH) is a protein and is secreted by the pituitary gland. Previous research has shown that GH mainly regulates the metabolism of human substances. Recently, GH has been shown to play an important role in the reproductive system. Studies have shown that GH is expressed in decidual tissue cells and late endometrial cells during early pregnancy (7). Other studies have noted (8) that the proliferation and metabolism of endometrial cells can be regulated by GH. Insulin-like growth factors (IGF) distributed on endometrial cells are bound by GH and it acts locally in the endometrium via paracrine and autocrine mechanisms. Cui et al. (9) performed a clinical study in combination with in vitro experiment to clarify the effect of GH. Patients treated with GH had a significantly greater endometrium thickness on day 3 compared with the control group (P<0.05). A dose-dependent increase of viability in the RL95-2 cells was observed while they were incubated with GH in CCK-8 assay. Based on the successful construction of rats with thin endometria, we studied the effect of GH intrauterine perfusion on thin endometrium. We present the following article in accordance with the ARRIVE reporting checklist (available at https://dx.doi.org/10.21037/atm-21-3583).

A total of 48 female Sprague-Dawley (SD) rats, weighing 230±15 g and aged 8–10 weeks, were used in this study. The experimental rats were recruited from the Medical Animal Experimental Center of Nanjing Medical University [Rat Animal License: SCXK (Su) 2016-0002]. The rats were maintained in the specific-pathogen free (SPF) animal room of Wannan Medical College under a 12 h light/dark cycle with ad libitum access to water and food at a relative humidity of 45–65% and an ambient temperature of 24±2 °C. Rat vaginal smears were performed daily between 8–9 am and 5–6 pm. Rats with 3 complete estrous cycles were chosen for the experiment. Experiments were performed under a project license (No.: LLSC-2019-001) granted by the First Affiliated Yijishan Hospital of Wannan Medical College Ethics Committee. All animal experiments are carried out in accordance with the National Institutes of Health Guide for the Care and Use of Laboratory animals.

A daily vaginal smear was used to examine estrus in rats. The rats with stable estrus were injected intraperitoneally with 10% chloral hydrate (0.3 mL/100 g) during estrus (10). The skin in the abdominal surgical area was prepared, the rat was placed on a sterile operating table, and the skin was disinfected with iodophor 3 times. Then, 2–2.5 cm above the pubic symphysis, a longitudinal opening of the abdomen was cut to 2–3 cm, and the abdomen was opened layer-by-layer. One side of the uterus was ligated near the vagina and ovary. We then injected 0.2 mL 95% ethanol into the uterus with a syringe, with the syringe kept in place for 5 min. Then, the remaining ethanol was pumped back out, and physiological saline was utilized to flush the uterine cavity twice. It was confirmed that there was no continuous bleeding at the incision site and that the uterus had returned to the normal anatomical position. The incision was sutured layer-by-layer, and the incision area was disinfected with iodophor 3 times.

After 3 estrous cycles (12–15 days), the rats were sacrificed during estrus. The uterus was placed in 10% neutral formalin for 24–48 h, dehydrated, and embedded in paraffin. Hematoxylin and eosin (HE) staining was performed to determine the thickness of the endometrium. We used IHC and western blotting to verify the expression of endometrial cytokeratin and vimentin.

The rat uterus was placed in a wax block and sliced at a thickness of 5 μm. The average thickness was obtained with the Leica Qwin Plus image processing software (Leica Microsystems Inc., Buffalo, IL, USA), and the vertical distance from the uterine cavity to the myometrium was measured (5 fields of view were randomly obtained).

Detection of cytokeratin and vimentin by IHC

The paraffin specimens were sliced and dewaxed in a 60 °C oven for 120 min and incubated with xylene I and II for 5 min. Then, the slides were subjected to 100% ethanol immunodehydration, routine dehydration for 5 minutes, ethylenediamine tetraacetic acid (EDTA) high-temperature antigen retrieval for 3 min, natural cooling for 10 min, a cold-water soak for 10 min, a complete soak in 3% hydrogen peroxide for 10 min, and 3 phosphate-buffered saline (PBS) rinses for 5 min each. Then, a ring was drawn with an IHC pen. The slides were sealed with 5% bovine serum albumin (BSA) at room temperature for 1 h, the BSA solution was discarded, and the remaining solution was removed by pipetting. The tissues were incubated with diluted primary antibody overnight at 4 °C. The primary antibody was removed, and the sample was rinsed with PBS and incubated with secondary antibody for 1 h at room temperature. After color development with 3,3’-diaminobenzidine (DAB), the sample was counterstained for 2–3 min, developed for 30 s, rinsed with water for 2 min, returned to room temperature for 2 min, incubated with 100% ethanol, dehydrated for 2 min, blown dry, and sealed with a neutral resin. A high magnification (×400) image was taken under a microscope. The results were quantified with Image-Pro Plus 6.0 software (Media Cybernetics, Rockville, MD, USA).

The uterine specimen was obtained from −80 °C storage and quickly scraped off on ice, then transferred to a centrifuge tube. The tissue [300 μL radioimmunoprecipitation assay (RIPA)] was homogenized on ice for 30 min, then centrifuged to remove the supernatant. In total, 100 μL supernatant were added to 100 μL 5× loading buffer and incubated in a boiling water bath for 5 min. The sample was resolved by electrophoresis, transferred to a membrane, blocked with milk for 2 h, washed for 5 min, incubated with the appropriate primary antibody (1:1,000), and shaken at 4 °C overnight. The membrane was washed with Tris-buffered saline with Tween 20 (TBST) for 5 min 3 times and incubated with a secondary antibody diluted in TBST (1:5,000) at room temperature for 2 h. Then, the membrane was washed, developing agent was added dropwise, and the membrane was exposed to film. Image J was used to measure and compare the expression of the target protein.

The statistical software SPSS 22.0 (IBM Corp., Chicago, IL, USA) was used to perform the analysis. The measured data were expressed as mean ± standard deviation. Comparisons were made among the groups by a one-way analysis of variance (ANOVA). Statistical significance was indicated by ɑ=0.05 and P<0.05. 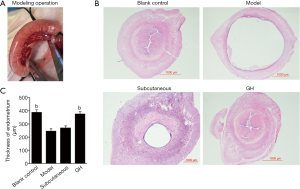 Vimentin and cytokeratin are members of the cytoskeletal intermediate filament protein family. They are recognised as dynamic structures and participate in cell proliferation and differentiation. Cytokeratin is mainly found in rat endometrial secretory glandular epithelial cells and the luminal epithelial cytoplasm. Vimentin is mainly expressed in the rat endometrial mesenchyme cytoplasm. Brown-yellow particle deposition was considered positive. The expression of cytokeratin and vimentin was increased in the GH group (P<0.01) and the blank control group (P<0.01). There was no significant difference between the blank control group and the GH group. The expression of cytokeratin and vimentin in the subcutaneous group was increased compared with that in the model group, but there was no significant difference (shown in Figure 2).

The American Society of Reproductive Medicine has indicated that with increasing endometrial thickness, clinical pregnancy and live birth or continued pregnancy rates significantly increase independent of patient age or embryo quality. A study involving more than 40,000 embryo transfers indicated that clinical pregnancy and the live birth rates decrease with each millimeter of reduction in endometrial thickness (11). However, to date, treatment of a thin endometrium has shown to be difficult.

This study explored the therapeutic effect of intrauterine perfusion of GH on thin endometria. We scientifically designed a randomized controlled trial to exclude other factors that may affect treatment, such as age, weight, and surgical injury. We successfully created model rats with thin endometria. In the model group, the intima thickness was significantly thinner than that in the control group. The expression levels of vimentin and cytokeratin were significantly reduced, which is consistent with the pathological features of a thin endometrium and the results reported by Miwa et al. (12).

An important role is played by GH in the reproductive process. Both human and rat endometrium have GH receptors. It can promote endometrial cell proliferation by binding IGF to the endometrium or the GH receptor (9). In our study, the thickness of the endometrium was significantly increased in the GH group compared with that in the model group, suggesting that the intrauterine infusion of GH played a positive role in the proliferation of endometrium. The main function of cytokeratin is to maintain the integrity and continuity of epithelial tissues, and the expression of cytokeratin level in cells is closely related to epithelial cell proliferation and differentiation. Vimentin is the most important intermediate fiber in mesenchymal cells, forming a cell scaffold along with microtubules and microfilaments. These proteins are all important markers for assessing cell proliferation (13). In our study, the expression of vimentin and cytokeratin in the GH group was significantly higher than that in the model group, suggesting that the proliferation and repair of the intima in the GH group was better than that in the model group.

Recently, intrauterine perfusion has become a new method in assisted reproductive treatment (14). It has been reported that peripheral perfusion of a peripheral blood mononuclear cell suspension can improve the implantation rate, live birth rate, and clinical pregnancy rate in patients with repeated implantation failure (15). For the first time, Gleicher et al. (16) used colony-stimulating factor to treat thin endometrium and achieved a favorable outcome. A prospective study indicated that intrauterine injection of human chorionic gonadotropin prior to embryo transfer significantly increased the implantation rate and pregnancy rate in IVF/intracytoplasmic sperm injection (ICSI) (17). Currently, research concerning the intrauterine infusion of GH for the treatment of a thin endometrium in rats is lacking. Therefore, we first proposed the intrauterine infusion of GH for the treatment of rats with thin endometrium. In our study, we added the subcutaneous group for comparison of therapeutic effect with the GH group. The thickness of the endometrium and the expression of vimentin and cytokeratin in the GH group were significantly higher than those in the subcutaneous injection group, suggesting that the therapeutic effect of uterine infusion of GH is better.

In summary, based on the successful construction of model rats, intrauterine infusion of GH significantly increased the thickness of endometrium. The experiments showed that the intrauterine perfusion of GH may be a new therapeutic approach for the treatment of a thin endometrium and further research is warranted.

Funding: This work was supported by the Introduced Talent Fund of Yi Jishan Hospital (KY25220349).

Reporting Checklist: The authors have completed the ARRIVE reporting checklist. Available at https://dx.doi.org/10.21037/atm-21-3583

Conflicts of Interest: All authors have completed the ICMJE uniform disclosure form (available at https://dx.doi.org/10.21037/atm-21-3583). The authors have no conflicts of interest to declare.

Ethical Statement: The authors are accountable for all aspects of the work in ensuring that questions related to the accuracy or integrity of any part of the work are appropriately investigated and resolved. Experiments were performed under a project license (No.: LLSC-2019-001) granted by the First Affiliated Yijishan Hospital of Wannan Medical College Ethics Committee. All animal experiments are carried out in accordance with the National Institutes of Health Guide for the Care and Use of Laboratory animals.