Breast cancer is one of the most important malignant tumors that threaten the health of women worldwide. China is one of the countries with the fastest growth rate of breast cancer, and it ranks first among female malignant tumors, so the burden of cancer is increasing (1). Hormone-receptor-positive (HR+), human epidermal growth factor receptor-2-negative (HER2−) breast cancer is a major subtype and the main treatments for advanced HR+, HER2− breast cancer patients are chemotherapy and endocrine therapy. In particular, endocrine therapy has the advantages of mild and transient side effects, excellent tolerability, and long tumor control time, which is an important aspect for patients with advanced breast cancer (ABC). However, drug resistance and subsequent treatment after endocrine therapy are of clinical concern (2).

Everolimus (EVE) is a mammalian target of rapamycin (mTOR) inhibitor, mainly acting on the phosphatidylinositol 3-kinase (PI3K)-protein kinase B (AKT)-mTOR pathway (3). The Food and Drug Administration approves the combination of EVE and exemestane for the treatment of ABC patients who are HR+, HER2−. Hyperactivation of the PI3K-AKT-mTOR signaling pathway is common in ABC and is implicated in resistance to endocrine therapy (4,5).

However, there is still little real-world data on the use of EVE in Chinese breast cancer patients, and predictors of treatment efficacy remain unclear. It reported that the single proteins or heatmap subgroups of the differentially activated PI3K pathways were unable to discriminate patients on EVE with poor or better prognosis (6). Because the efficacy of EVE is also largely independent of the most commonly altered genes or pathways in breast cancer, the potential impact of chromosomal instabilities and low-frequency genetic alterations on EVE efficacy remains to be further investigated (7).

Thus, the purpose of this study was to retrospectively analyze real-world data, determine the factors that influence EVE treatment efficacy, and search for a better treatment regimen. We present the following article in accordance with the STROBE reporting checklist (available at https://dx.doi.org/10.21037/atm-21-3840).

We enrolled ABC patients treated with EVE from 2013 to 2020 in Zhejiang Cancer Hospital who met the following criteria: ABC confirmed by pathological or imaging examination; latest pathology testing of the metastatic tumor showed estrogen receptor-positive (ER+), or progesterone receptor-positive (PR+), HER2− breast cancer; patients received EVE + endocrine therapy including aromatase inhibitor (AI) or fulvestrant (FUL), not combined with chemotherapy or targeted therapy; patients had detailed medical records and imaging data, and survival follow-up information was available. The flowchart of this retrospective study is shown in Figure 1. This study was approved by the Zhejiang Cancer Hospital Ethics Committee (No. IRB-2021-85), and the need for written informed consent was waived by the Ethics Committee because of the retrospective nature. This study was conducted following the Declaration of Helsinki (as revised in 2013). 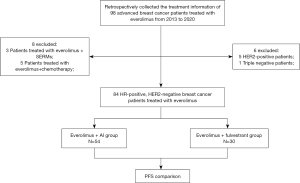 Data were retrieved from the medical records, including clinical features, history of surgery and adjuvant treatment, organs and number of tumor metastases, the combined EVE treatment regimens, previous treatment lines, dose adjustment, and optimal outcomes. We also inquired of patients or their families by telephone to ascertain the survival time, which was not always available from the medical records.

Efficacy and safety in the overall patient cohort 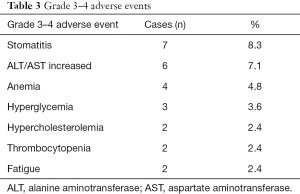 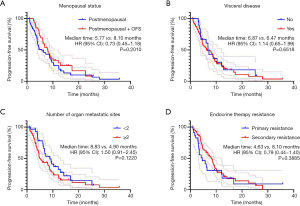 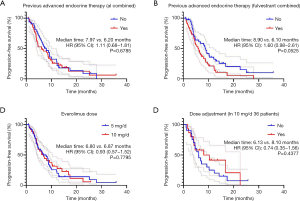 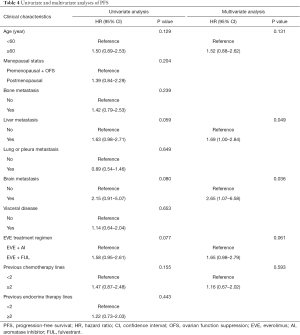 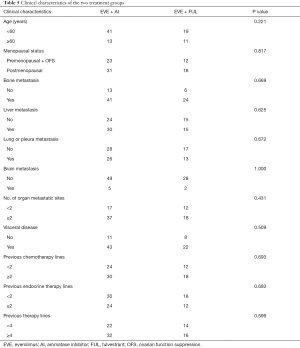 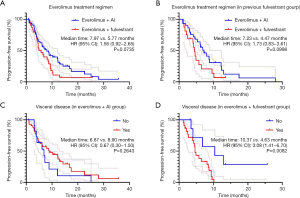 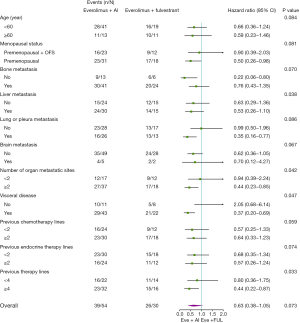 Although cyclin-dependent kinases (CDK) 4/6 inhibitors and histone deacetylase (HDAC) inhibitors had achieved very good results as endocrine treatments of ABC (8,9), they are poorly available for Chinese patients due to their high price. Therefore, combined EVE therapy is a viable choice for advanced HR+, HER2− breast cancer patients, although there is scant information on efficacy in Chinese patients.

This study demonstrated that EVE combined with AI or FUL is an effective treatment option with good tolerance. The classic study of EVE was the BOLERO-2 clinical trials, which evaluated the efficacy and safety of the combination of EVE and exemestane in HR+ breast cancer patients refractory to nonsteroidal AI. The results showed the median PFS assessed by the local investigators was 6.9 months for EVE + exemestane, vs. 10.6 months by central assessment (10). As for OS analysis, the median duration was 31.0 months, and the EVE group did not have a significantly reduced risk of death compared with the placebo group (11). Further ethnicity subgroup analysis resulted in a median PFS duration among EVE-treated Asian patients of 8.48 months, and the DCR was 75%, and 7.33 months in non-Asian patients (12). Another real-world retrospective study conducted in China to evaluate the efficacy and safety of EVE + endocrine therapy showed a median PFS of 5.9 months (95% CI, 4.6–7.2), and the median OS was not reached (13). Safety results were in line with the prior safety profile of the EVE study; the most common grade 3–4 adverse event was stomatitis, and the incidence was around 10% (14).

The results from this study suggested no difference in PFS for the different menopausal status, visceral disease, drug resistance, EVE dose, and dose adjustment groups. The BOLERO-2 trial’s age subgroup analysis showed that the addition of EVE to exemestane increased the median PFS to 6.77 months in elderly patients, and to 8.11 months in younger patients (15). An Austrian study (16) similarly found the median PFS was numerically longer in the 10 mg EVE subgroup compared with the 5 mg EVE subgroup (9.9 vs. 8.0 months). For patients who had dose escalation from 5 to 10 mg, the median PFS was 7.8 months while patients who had dose de-escalation from 10 to 5 mg, the median PFS was 9.5 months; however, the difference was not statistically significant (16). The MIRACLE study was a clinical trial comparing letrozole and letrozole combined with EVE as a first-line treatment of Chinese patients with HR+/HER2− breast cancer recurrence or metastasis after treatment with tamoxifen. The results showed the PFS was 19.2 months, and in the subgroup analysis, PFS benefited from EVE treatment whether there was primary or secondary endocrine resistance (17).

This study innovatively found that brain metastasis and liver metastasis were independent risk factors for EVE treatment. Though EVE is an mTOR inhibitor, whether mutation of the PI3K-AKT-mTOR signaling pathway is a prognostic factor remains controversial. Sirico et al. found a PET-based biomarker provided additional information on which patients were most likely to benefit from EVE + exemestane-based therapy (20). The EverExt study demonstrated that more patients in the lowest fasting glucose (FG) category achieved clinical benefit compared with the highest group of breast cancer patients treated with EVE + exemestane, and FG at re-assessment was also predictive of PFS. More than that, treatment discontinuation was significantly associated with changes in FG (21). However, this study did not find a correlation between treatment lines and PFS. The BOLERO-4 clinical trial found a median PFS of 22.0 months (95% CI, 18.1–25.1 months) with EVE and letrozole as first-line treatment vs. 3.7 months (95% CI, 1.9–7.4 months) with EVE and exemestane as second-line treatment (22). The PFS gap between BOLERO-4 clinical trial and our study may be that most of the patients we included had undergone multi-line treatment and could not achieve such a long PFS.

Surprisingly, our subgroup analyses showed that EVE + FUL was not superior to EVE + AI. Moreover, in some groups, EVE + AI showed even better PFS than the EVE + FUL treatment strategy. Previous studies mainly compared EVE + endocrine therapy to endocrine therapy alone. The PrE0102 study found that EVE + FUL was more efficacious than FUL alone in ER+ ABC resistant to AI therapy. The addition of EVE to FUL improved the median PFS from 5.1 to 10.3 months (23), which was very close to the 10.6 months by central assessment in the BOLERO-2 trial. The FALCON trial also showed a clinical benefit rate of 78% with FUL and 74% with anastrozole, which had no statistical difference in HR+ ABC (24). And during the first 6 months’ follow-up, there was no significant difference in PFS between the two groups, which suggested there might not be such a gap between the efficacy of AI and FUL over the short term.

There are some weaknesses in this study. First, some but not all patients had next-generation sequencing tests, so there was insufficient data about the relationship between a PI3K-AKT-mTOR signaling pathway mutation and EVE treatment efficacy. Second, in terms of adverse reactions, we only collected grade 3–4 adverse reactions, because grade 1–2 adverse reactions were partly missing in the electronic medical record. Third, this was a single-center retrospective study, so the outcomes still need further prospective and randomized clinical trials for validation.

The authors thank all patients enrolled in this study.

Funding: This study was supported by the Zhejiang Provincial Research Center for Cancer Intelligent Diagnosis and Molecular Technology (JBZX-202003).

Reporting Checklist: The authors have completed the STROBE reporting checklist. Available at https://dx.doi.org/10.21037/atm-21-3840

Conflicts of Interest: All authors have completed the ICMJE uniform disclosure form (available at https://dx.doi.org/10.21037/atm-21-3840). The authors have no conflicts of interest to declare.

Ethical Statement: The authors are accountable for all aspects of the work in ensuring that questions related to the accuracy or integrity of any part of the work are appropriately investigated and resolved. This study was approved by the Zhejiang Cancer Hospital Ethics Committee (No. IRB-2021-85), and the need for written informed consent was waived by the Ethics Committee because of the retrospective nature. This study was conducted following the Declaration of Helsinki (as revised in 2013).