Nasopharyngeal carcinoma (NPC) is endemic in certain regions, especially in southern China and Southeast Asia (1). The annual incidence of NPC is 15–50 cases per 100,000 people (2). NPC is unresectable due to its proximity to the skull base, but has high radiosensitivity. Radiation therapy remains the mainstay treatment modality for locoregionally confined stages of NPC, and the tumor, nodes, and metastases (TNM) staging system is the most reliable method for guiding treatment decisions and predicting prognosis. However, the TNM staging system chiefly classifies the extent of the disease based on anatomical information, and is inadequate for assessments of prognosis (3). Thus, it would be of great clinical value to identify novel prognostic indicators to improve outcome prediction and optimize the treatment of patients with NPC.

With an occurrence rate of 37%, hypertension has been reported to be the most common comorbidity encountered in patients with tumors (4). Many studies have suggested that hypertension is associated with an increased risk of cancer, such as renal cell carcinoma (5), breast cancer (6), and urinary bladder cancer (7). In addition, renal cancer (8), pancreatic cancer (9), and esophageal cancer patients (10) with hypertension have poorer prognoses than normotensive patients.

To the best of our knowledge, only 1 study has examined the association between hypertension and the survival of NPC patients (11), and that study population covered both non-metastatic and metastatic NPC patients. As the biological behaviors and therapeutic principles are obviously different between these 2 groups, it is reasonable to discuss the prognostic indicators separately. Further, it is well known that intensity-modulated radiation therapy (IMRT) provides excellent local control and is now a mainstream radiation therapy (12). However, the prognostic value of hypertension in NPC patients treated with IMRT is unclear. Thus, in this study, we conducted a retrospective analysis of existing patient data to evaluate the prognostic effect of hypertension on the outcome of non-metastatic NPC patients treated with IMRT. We present the following article in accordance with the STROBE reporting checklist (available at https://dx.doi.org/10.21037/atm-21-3130).

We reviewed the medical records of all patients with NPC treated with IMRT at The Affiliated Cancer Hospital and Institute of Guangzhou Medical University between February 2010 and October 2016. All newly diagnosed patients who had been histologically confirmed to have this non-metastatic disease were included in this study. Ultimately, 1,057 patients were enrolled in this study. All the patients underwent a physical examination, fiberoptic examination, chest X-ray, abdominal ultrasonography, magnetic resonance imaging (MRI) of the neck and nasopharynx, and a whole-body bone scan using single-photon emission computed tomography (SPECT) before treatment. The medical records and imaging studies were analyzed retrospectively, and all patients were restaged according to the 8th edition of the Union for International Cancer Control/American Joint Committee on Cancer staging system for NPC. The study was conducted in accordance with the Declaration of Helsinki (as revised in 2013). The study was reviewed and approved by the Ethics Committee of The Affiliated Cancer Hospital & Institute of Guangzhou Medical University (No. 2020-73), and individual consent for this retrospective analysis was waived.

All patient medical records were thoroughly reviewed. In our study, patients were diagnosed with pre-treatment hypertension if they had an average systolic blood pressure (SBP) ≥140 mmHg, and/or diastolic blood pressure (DBP) ≥90 mmHg (measured 3 times on different days) and were not being treated with antihypertensive drugs, or if they had a history of hypertension or were receiving antihypertension medication treatment. Hypertension was categorized as Grade 1 (BP ≥140/90 mmHg), Grade 2 (BP ≥160/100 mmHg), or Grade 3 (BP ≥180/110 mmHg).

All patients were treated with definitive IMRT at The Affiliated Cancer Hospital and Institute of Guangzhou Medical University. A high-resolution planning computed tomography (CT) scan with contrast was taken from the vertex down to 2 cm below the sternoclavicular joint. The target volumes were delineated in accordance with the International Commission on Radiation Units and Measurements reports 50 and 62. The planning target volumes (PTVs) and planning organs at risk volumes (PRVs) were generated by adding a margin of 3 mm to the respective clinical target volumes (CTVs) and corresponding structures, such as the spinal cord and brainstem. The prescribed dose was 68–70 Gy to the PTV of the gross tumor volume of the primary (GTV-P), 64–66 Gy to the PTV of the nodal gross tumor volume (GTV-N), 60–66 Gy to the PTV of the clinical target volume-1 (CTV-1; i.e., high-risk regions), and 54–56 Gy to the PTV of the CTV-2 (i.e., low-risk regions) and CTV-N (i.e., neck nodal regions) in 30–33 fractions. All targets were treated simultaneously using the simultaneous integrated boost technique. The irradiation was delivered once daily, 5 days per week.

The institutional guidelines recommend no chemotherapy for patients in the early stage, and induction, concurrent and adjuvant chemotherapy or combined treatment for those in the locoregionally advanced stage. Induction or adjuvant chemotherapy consisted of platinum with 5-fluorouracil, platinum with taxane, or triplet therapy with platinum and 5-fluorouracil plus taxane every 3 weeks for 1 to 3 cycles. Concurrent chemotherapy consisted of platinum administered weekly or in weeks 1, 4, and 7 of radiotherapy. Deviation from the institutional guidelines occurred as a result of organ dysfunction, treatment intolerance, and/or patient refusal.

The baseline characteristics between the hypertensive and normotensive groups were compared and analyzed using a chi-square test. The actuarial rates were estimated using the Kaplan-Meier method, and the differences were compared using the log-rank test. Multivariate analyses with the Cox proportional hazards model were used to test the independent significance of different explanatory variables. Two-tailed P values <0.05 were considered statistically significant.

The characteristics of the 1,057 NPC patients are summarized in Table 1. There were no differences between the 2 groups in terms of the distributions of sex, T stage, N stage, or clinical stage (P>0.05). However, the hypertension group had a higher percentage of patients who were older (P=0.000), and fewer hypertensive patients received chemotherapy and RT than normotensive patients (P=0.000). 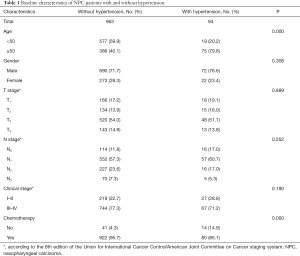 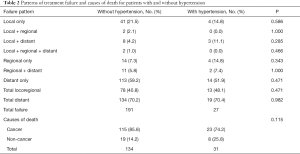 Prognostic value of hypertension in patients with NPC 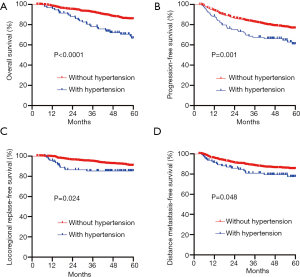 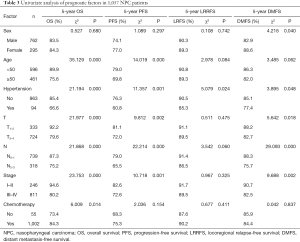 Prognostic value of the grade of hypertension 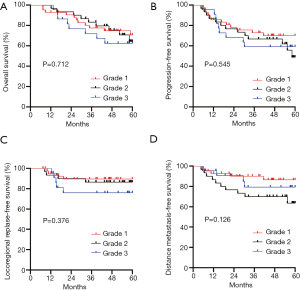 To our knowledge, this is the largest and most detailed study undertaken to evaluate the effects of hypertension on the prognosis of non-metastatic NPC patients treated with IMRT. We found that hypertension was associated with a significant increase in the risk of death, disease progress, and distant metastasis in non-metastatic NPC patients treated with IMRT. Further, these results remained unchanged after adjusting for known prognostic factors.

In our study, the incidence of hypertension was 8.9%, which was lower than that of a previous study (17.8%) (11). A possible explanation for this difference may be the stricter patient selection criteria employed in the present study whereby only non-metastatic NPC patients who received IMRT were included in this study. The hypertensive patients in our study tended to be elderly and have only received radiotherapy. This is likely because hypertension is a kind of comorbidity, and the risk of comorbidity increases with age, and older people with complications are less able to receive chemotherapy than the rest of the population.

Various potential mechanisms have been reported to link hypertension to carcinogenic processes. Chronic hypoxia and vascular endothelial growth factor (VEGF) are considered partly responsible for the increased cancer mortality of patients with hypertension (10,13). It is well known that hypertension leads to angiosclerosis and artery stenosis, resulting in insufficient blood supply to tissues and hypoxia. Hypoxic tumor cells exhibit increased resistance to radiotherapy, which may result in treatment failure, local relapse, and metastasis (14,15), especially for NPC, which is mainly treated by radiation therapy Conversely, VEGF was found to be increased in hypertensive patients (16), and was also confirmed to promote tumor angiogenesis (17). Thus, it is possible that VEGF causes tumor cell proliferation and metastasis in cancer patients with hypertension. Further, studies have reported that there is a close relationship between hypoxia and VEGF expression in tumors and that hypoxia can induce an increase in VEGF expression (18,19). Our results indicate that NPC patients with hypertension had HRs of 2.056, 1.716, and 1.658 for death, disease progress, and distant metastasis, respectively. Our results are similar to those reported by other research groups, including those of Yang et al. (11), who conducted a multivariate analysis that indicated that hypertension is an independent risk factor of survival, and results in poorer survival outcomes in patients with NPC. Similarly, Eytan et al. (20) analyzed the effects of hypertension on the survival of head and neck cancer patients and found a 7–19% increased risk of cancer mortality in patients with hypertension compared to patients without hypertension. To date, only 2 studies (including this study) have reported the poor prognostic value of hypertension in NPC patients. More research should be conducted to evaluate the effects of hypertension on the survival outcomes of NPC patients.

Previous findings have suggested that β-blockers have a potentially favorable prognostic role for several tumors (22,23). Due to the small sample size of the hypertension group in this study, we did not classify antihypertensive drugs or analyze the effects of different antihypertensive drugs on the prognosis of NPC. It remains unclear whether antihypertensive treatments improve cancer survival because of the blood pressure-lowering effects alone or because of additional anticancer mechanisms. Thus, this issue requires further investigation.

The results of the current study provide the first evidence of the unfavorable prognostic effect of hypertension on the prognosis of patients with non-metastatic NPC who received IMRT. Thus, researchers conducting clinical trials in patients with NPC should pay attention to the incidence of hypertension in different treatment arms. High BP can damage arteries and kidneys, causing stroke, kidney disease and other illnesses, and may result in a reduced ability to receive chemotherapy and an increase in non-cancer-related death rates. It is current practice in the tumor population to control BP within reasonable limits before antitumor therapy, which is similar to the treatment approach adopted for the non-cancer population.

This study had some limitations. First, due to the retrospective nature of the study, a non-randomized study design was adopted. However, we attempted to reduce any potential bias by conducting univariate and multivariate analyses. Second, we only focused on patients diagnosed with hypertension who have not yet received anticancer treatment. Some patients may have become hypertensive during the follow-up period, but such patients were not included in this study, as we could not accurately determine the reliability of information gathered from outpatient or telephone follow-up conversations. Third, we did not have information about the type or dose of antihypertensive medications that participants were taking, and thus could not explore the role of specific antihypertensive medications on prognosis.

In the current study, hypertension was found to be an independent poor prognostic factor for non-metastatic NPC patients receiving IMRT. The question of whether the severity of hypertension affects prognosis needs to be further verified by large sample data.

Reporting Checklist: The authors have completed the STROBE reporting checklist. Available at https://dx.doi.org/10.21037/atm-21-3130

Conflicts of Interest: All authors have completed the ICMJE uniform disclosure form (available at https://dx.doi.org/10.21037/atm-21-3130). The authors have no conflicts of interest to declare.

Ethical Statement: The authors are accountable for all aspects of the work, including ensuring that any questions related to the accuracy or integrity of any part of the work have been appropriately investigated and resolved. The study was conducted in accordance with the Declaration of Helsinki (as revised in 2013). The study was approved by the Ethics Committee of The Affiliated Cancer Hospital & Institute of Guangzhou Medical University (No. 2020-73), and individual consent for this retrospective analysis was waived.