Lung cancer is the most common cancer worldwide and is also one of the leading causes of cancer-related mortality (1,2). Non-small cell lung cancer (NSCLC) accounts for more than 80% of all lung cancer cases (3,4). Appropriate and accurate therapy impacts morbidity and mortality outcomes. Determination of the therapeutic schedule for NSCLC depends on various factors, including but not limited to the period of disease, patient comorbidities or performance scores, and the biological features of carcinoma (3,5). Resection is the standard treatment for patients with an early-stage disease and medically suitable conditions (6,7), whereas multimodality therapy involving chemotherapy, radiotherapy, and surgical resection is recommended for locally advanced tumors (8,9). For patients with stage IV disease, systemic therapy, including chemotherapy, immune therapy, and targeted therapy, is the main strategy, and local consolidative therapy tends to be performed for patients with oligometastases (10-13).

The anatomic extent of malignant carcinoma is presented according to the TNM staging system. Seventy-six types of malignant tumors were described by TNM staging, and approximately 20 types of carcinoma, such as lung and prostate cancers, include further subdivisions of the M1 category (10,14,15). According to the American Joint Committee on Cancer (AJCC) 8th edition, the M1 stage of lung cancer has been divided into three subcategories: M1a, separate tumor nodule(s) in the contralateral lobe, a tumor with pleural or pericardial nodules, malignant pleural nodules, or pericardial effusion; M1b, single extrathoracic metastasis in a single organ; and M1c, multiple extrathoracic metastases in one or several organs (16). However, patients with stage IV NSCLC are thought to have the same prognosis in defiance of histological grade, EGFR mutation, PD-1 expression, and PD-L1 expression (17,18). Therefore, further subdivision of stage IV tumors is clinically important for predicting prognosis and guiding individualized treatment.

By performing a population-based study, we aimed to evaluate the prognostic effects of local consolidative therapy for patients with stage IV NSCLC and divide patients with stage IV NSCLC into different subcategories to stratify the prognoses. We present the following article in accordance with the TRIPOD reporting checklist (available at https://dx.doi.org/10.21037/atm-21-1383).

Patients were selected from the SEER database, which includes clinical records for cancer occurrences in 18 areas of the United States corresponding to approximately 27.8% of the population (19). The study was conducted in accordance with the Declaration of Helsinki (as revised in 2013). SEER*Stat Database: Incidence, SEER 18 Regs Research Data (with chemotherapy recode), Nov 2015 Sub (2000–2013) software (version 8.3.5; seer.cancer.gov/seerstat) was used to identify patients with NSCLC diagnosed from 2010 through 2013. Patients with lung cancer were selected using ICD-O-3 codes (C34.0–C34.9). SEER database includes information on patient demographics, the position and morphology of a primary carcinoma, the stage of a tumor at diagnosis, the ﬁrst treatment modality, and survival status. Only patients who were diagnosed with stage IV NSCLC at the initial diagnosis and had only one malignant primary in lifetime were included. Figure 1 details the selection process for the inclusion of patients. All patients were at least 18 years old. Patients with tumors that were stage I to III, unknown follow-ups and basic information, or unknown bone involvement, brain involvement, liver involvement, or lung involvement and patients diagnosed by autopsy or death certiﬁcate were not included in the study. As a result, we selected a total of 30,583 patients in our cohort for analysis.

Cancer-specific mortality (CSM) was defined as death due to lung cancer utilizing the specific codes from the SEER database as in prior articles (21,22). Kaplan-Meier and log-rank tests were conducted to evaluate CSM rates. Pearson’s χ2 test and Fisher’s exact test were applied to analyze categorical data, while Student’s t-test and the Mann-Whitney U-test were applied to analyze numerical data. SPSS 23.0 software (IBM Corp., Armonk, New York, USA) was used to perform the statistical analysis. A Fine-Gray competing risk model was applied in multivariable analyses by using variables with P<0.05 in the univariable analysis. All analyses were double-tailed. A P value <0.05 was considered statistically significant. 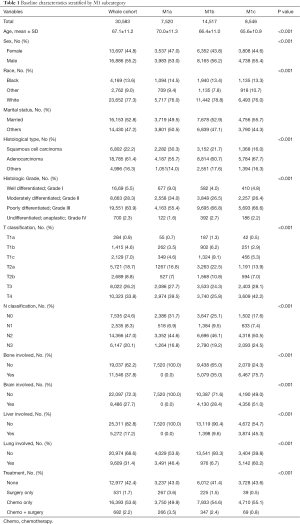 Association between clinicopathological characteristics of patients and CSM rates 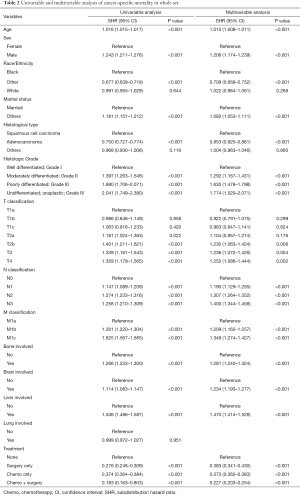 Subdivision of the M1 category 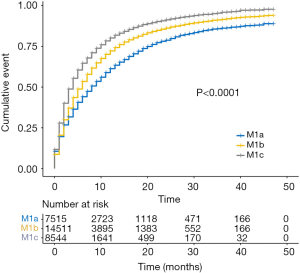 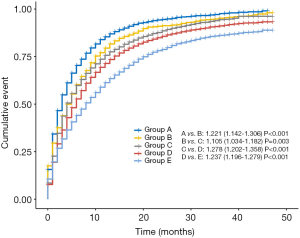 Associations between treatment modalities and M1 subcategories with survival status

Figure 4 Kaplan-Meier curves of cancer-specific mortality stratified by treatment modality in M1a, M1b, and M1c patients in whole set. Patients receiving no treatment were used as the reference category and data are presented as subdistribution hazard ratio (SHR) (95% CI). 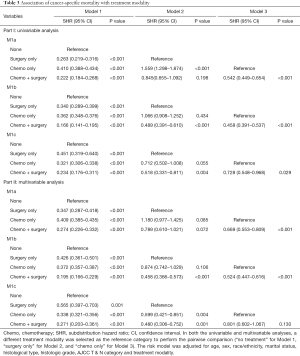 In 2015, using a database including 94,708 patients diagnosed as lung cancer from 1999 to 2010, the International Association for the Study of Lung Cancer (IASLC) recommended a new TNM classification (23). Totally, 1,059 NSCLC patients were utilized to evaluate prognostic value of distant metastasis and develop a new M classification including M1a, M1b, and M1c (24). Patients with single extra-thoracic metastatic lesion and multiple extra-thoracic metastatic lesions were classified as M1b and M1c, respectively. Nevertheless, this classification was constructed by a univariable analysis and lacked of external validation. Therefore, we conducted a retrospective analysis using SEER database with methods of multivariable adjusted analysis and subgroup analyses. The aim of the current study was to validate the prognostic value of the proposed M classification, evaluate the prognostic effects of local consolidative therapy for stage IV NSCLC patients, and divide these patients into different subcategories to stratify the prognoses.

The current study pay attention to the association between the organs involvement of metastatic disease and the CSM rates in stage IV NSCLC patients. It was found that liver and brain involvement were independently related to high CSM rates. In addition, five subcategories were further subdivided and were found to have significantly different cumulative incidence rates of CSM across five groups. Our study indicated that selected patients would obtain beneﬁt from local consolidative therapy and further M1 stage division may help to establish therapies.

Only a small proportion of patients with oligometastatic NSCLC have long-term disease-free intervals. Local treatment, including surgery and radiation, improved the overall survival of these patients in several retrospective studies (25-27). Furthermore, several prospective phase II clinical trials also suggested improved progression-free survival with local consolidative therapy including surgery and stereotactic body radiation therapy (SBRT) for patients with oligometastatic NSCLC (28-30). Recently, a meta-analysis including 943 patients reported that 95% of patients with oligometastatic cancer who received surgery and SBRT had local control at one year (31). The above findings are consistent with the results in the current study. In this article, we also demonstrate that chemotherapy plus surgery can improve the survival of stage IV patients, which strengthens the prognostic impact of local consolidative therapy.

There are several possible mechanisms which may explain the benefit of chemotherapy on the subject of CSM rates. First, chemotherapy may reduce the burden of malignant cells which are difficult to be eliminated by maintenance therapy and may become a source of metastatic spread. Chemotherapy would lessen the burden of malignant cells in that situation. Second, certain chemotherapies have been reported to enhance antitumor immune responses and may improve prognosis of patients (32,33). Third, the growth of distant micro-metastatic disease was promoted by residual tumor after initial systemic therapy through proangiogenic and immunosuppressive effects. In that situation, chemotherapy would slow the growth rate of distant micro-metastasis by reducing the burden of residual tumor. Remarkably, the above mechanisms are not exclusive, and the benefits of chemotherapy may result from more than one of these mechanisms.

It is of clinical importance to distinguish M1b from M1c disease with the reasons that (I) M1c disease tends to have higher CSM than M1b disease and (II) some patients with M1b NSCLC can benefit from local consolidative therapy. A favorable outcome was observed to be associated with local consolidative therapy in the patients with oligometastatic NSCLC (41-43). Nevertheless, the value of surgery for M1c patients was not confirmed in the current study, which may result from the high heterogeneity of organs with metastases. Given that the prior studies concerning this issue only retrospectively contained a small number of patients (25,44,45), a prospective clinical trial is necessary to be conducted.

Our study has limitations. Data on smoking status, recurrence-free survival, driver gene mutations, the type and cycle number of chemotherapy, targeted therapy, immunotherapy, and performance score are not reported in the SEER database. In addition, our study is a retrospective study, and the nature of a retrospective analysis may lead to limited data and some selection biases; completely accounting for these limitations is impossible outside of a prospective randomized clinical trial. Future prospective and multi-institutional studies are needed to validate our conclusions. Although the SEER database captures most cancer diagnoses, it is not a population-based database, and generalizability may be limited.

In future studies, precisely defining the stage of stage IV NSCLC, its subclassification as metastatic or synchronous, and its differentiation in relation to recurrence and progression will be important to obtain comparable results based on innovative biomarkers intended to facilitate unbiased treatment allocation. In particular, this process will be important in the evolving field of immunotherapy, which is a substantial pillar in the treatment of stage IV NSCLC.

Disease subdivision within the M1 category and knowledge of liver involvement may help to inform the prognosis of patients with NSCLC and guide treatment modality.

We thank Yi Fung Chau for helping us polish our article.

Reporting Checklist: The authors have completed the TRIPOD reporting checklist. Available at https://dx.doi.org/10.21037/atm-21-1383

Conflicts of Interest: All authors have completed the ICMJE uniform disclosure form (available at https://dx.doi.org/10.21037/atm-21-1383). The authors have no conflicts of interest to declare.