Lung abscess is defined as a circumscribed area of pus or necrotic debris in lung parenchima, which leads to a cavity, and after formation of bronchopulmonary fistula, an air-fluid level inside the cavity (1).

Lung abscess is in the group of lung infections such as lung gangrene and necrotizing pneumonia which is characterized with multiple abscesses (2).

The clinical signs and therapy of lung abscess was described for the first time by Hippocrates. In pre-antibiotic era, one third of patients with lung abscess would die, the other third of patients would recover fully, and the rest of them would survive with sequels such as chronic lung abscess, pleural empyema or bronchiectasis (3). In that time, surgery was considered as the only effective therapy, and today most of the patients will be fully recovered only with antibiotic therapy.

In pre antibiotic era, lung abscess was caused by one type of bacteria, and today almost in all cases is caused by poly microbial flora (2).

Based on way of spreading, lung abscess can be bronchogenic (aspiration, inhalation) and haematogenic-dissemination from other infected sites.

Acute lung abscess is usually circumscribed with not so well-defined surrounding to lung parenchyma, fulfilled with thick necrotic detritus (Figure 1). Histologically, in central parts of abscess there are necrotic tissue mixed with necrotic granulocytes and bacteria. Around this area there are preserved neutrophillic granulocytes with dilated blood vessels and inflammatory oedema (Figure 2). 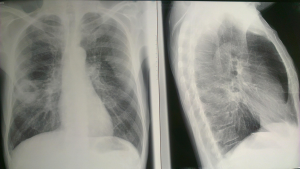 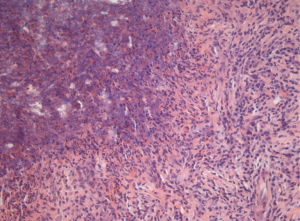 Chronic lung abscess is usually irregular star-like shape with well-defined surrounding to lung parenchyma, fulfilled with grayish line or thick detritus (Figure 3). In the centre of abscess is located pus wit or without bacteria. Around abscess is located pyogenic membrane through which white blood cells are migrating to abscess cavitation. Around pyogenic membrane lymphocytes, plasma cells and histiocytes are placed in connective tissue (Figure 4). 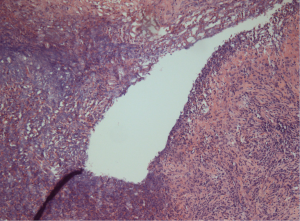 Figure 4 Around pyogenic membrane lymphocytes, plasma cells and histiocytes are placed in connective tissue. (HE, ×100).

Predictive parts of lung as common sites for lung abscess have been apical segment of lower lobe of right and sometimes of left lung, then lateral part of posterior segment of right upper lobe—axillary sub segment, and middle lobe in case of vomiting and aspiration in prone position—this is typically for alcoholic persons. In 75% of all lung abscesses, they are located in posterior segment of right upper lobe or in apical segment of lower lobe of both lungs (5).

Etiological, abscesses occurred after oropharyngeal aspiration is localized in posterior segments of the lungs, and there are no patterns for hematological dissemination of lung abscesses.

Initially, aspiration secretion is localized in distal parts of bronchi causing localized pneumonitis (16,17). In the next 24 to 48 hours (h) a larger area of inflammation with necrotic debris will develop. Invasive bacterial toxins, vasculitis, venous thrombosis and proteolytic enzymes from neutrophilic granulocytes will make a colliquative necrotic focus (19).

If the infective lung tissue affects visceral pleura, a pyopneumothorax or pleural empyema will develop. In case of adequate antibiotic therapy and good immunologic status of patient, the chronic inflammatory reaction will circumscribe the process. In case of inadequate or delayed antibiotic therapy, poor general condition of patient, a sepsis can occur. If there is connection with the bronchus, necrotic detritus will empty the abscesses cavity and radiological sign of air-fluid level will occur.

In case of favorable outcome, a necrotic tissue will be eliminated by lysis and phagocytosis and granulation tissue will make a scar tissue.

In case of adverse outcome, infection will spread around the lung tissue and pleural, mediastinal or cutaneous fistula can occur. In chronic abscess a necrotic detritus will be usually reabsorb and fibrosis and calcification can occur.

Early signs and symptoms of lung abscess cannot be differentiate from pneumonia and include fever with shivering, cough, night sweats, dispnea, weight loss and fatigue, chest pain and sometimes anemia. At the beginning cough is non-productive, but when communication with bronchus appears, the productive cough (vomique) is the typical sign (20,21). Cough remains productive, sometimes followed by hemoptysis. In patients with chronic abscess clubbing fingers can appear.

Differential diagnosis includes excavating tuberculosis and mycosis, but seldom can been seen radiological sign of gas-liquid level. Pulmonary cystic lesions, such as intrapulmonary located bronchial cysts, sequestration or secondary infected emphysematous bullae can be difficult to differentiate, but localization of lesion and clinical signs can indicate the appropriate diagnosis. Localized pleural empyema can be distinguished by using CT scan or ultrasound (22).

Excavating bronchial carcinomas such as squamocellular or microcellular carcinoma are usually presented with thicker and irregular wall comparing to infectious lung abscess (23) (Figure 5). Absence of febricity, purulent sputum and leukocytosis can indicate the carcinoma and not the infective disease (24). Radiological sign of air-fluid level can be seen and in hydatid cyst of lung (25,26) (Figure 6). 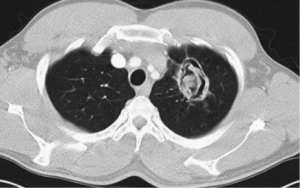 Figure 6 Radiological sign of air-fluid level can be seen and in hydatid cyst of lung.

Standard conservative therapy for lung abscess with anaerobic bacteria is clindamycin (600 mg IV on 8 h), who showed, in several clinical trials superiority to penicillin in terms of rates of response, duration of fever and time to resolution of putrid sputum (28). Some types of Bacteroides species and Fusobacterium species can produce β-lactamase, so they are resistant to penicillin. About 15-20% of anaerobic bacteria who are responsible for lung abscess formation are resistant to penicillin only, so alternative is combination of penicillin and clavulanate or combination of penicillin and metronidazole (29).

Metronidazole, as a single therapy does not appear to be particularly effective, due to poly microbial flora, presumably microaerophilic streptococci, such as Streptococcus milleri (30).

Recommended combinations of antibiotics for lung abscess are combination of β-lactam with inhibitors of β-lactamase (ticarcilin-clavulanate, ampicillin-sulbactam, amoxicillin-clavulanate, piperacilin-tazobactam), chloramphenicol, imipenem or meropenem, second generation of cephalosporins (cefoxitin, cefotetan), newer generation of fluoroquinolones-moxifloxacin, who shoved to be as effective as combination ampicillin-sulbactam (31).

Aminoglycosides are not recommended in treatment of lung abscess since they poorly pass through fibrous pyogenic membrane of chronic abscess.

It is recommended to treat lung abscess with broad spectrum antibiotics, due to poly microbial flora, such as Clindamycin (600 mg IV on 8 h) and then 300 mg PO on 8 h or combination ampicilin/sulbactam (1.5-3 gr IV on 6 h) (32).

If there is no improvement of general condition or radiographic finding, it is necessary to perform bronchoscopy due to some other etiological factor and change the antibiotics. 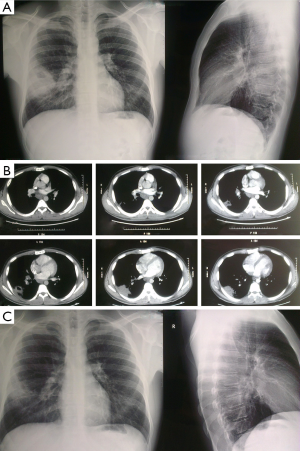 Bronchoscopy should be the integral part of the algorithm for diagnostic and therapy of lung abscess. General supporting measures include hyper caloric diet, correction of fluids and electrolytes and respiratory rehabilitation with postural drainage. Drainage procedures include percussion and positioning to increase drainage through the airways. Lung abscess often will rupture spontaneously into the airways, which aids in clearing the infection, but also may result in spread of the infection to other parts of the lung.

Abscess greater than 6 cm in diameter or if symptoms lasts more than 12 weeks with appropriate therapy, have little chances for only conservative healing, and surgical therapy should be considered, if general condition allows. Options for surgery are: chest tube drainage or surgical resection of lung abscess with surrounding tissue.

Endoscopic drainage of lung abscesses is described as an alternative to chest tube drainage and is performed during the bronchoscopy with usage of laser. It was recommended for the patients with poor general condition, coagulopathies and for the abscesses with central locations in lungs. One of the possible complication of these technique is a spillage of necrotic detritus in other parts of the lungs (35,36).

Per cutaneous trans thoracic tube drainage is easy to do surgical procedure in local anaesthesia, and nowadays it is recommended to perform it ultrasound or computerized tomography (CT) scan control (37,38). The first one was described in 1938 for treatment of tuberculosis lung cavities. It was later used routinely in the management of lung abscesses, before the antibiotic era and became the treatment of choice (39). Per cutaneous chest tube drainage of lung abscess is indicated in about 11-21% patients after failure of antibiotics therapy (40).

Chest tube drainage, as a definitive therapy for lung abscess is present in about 84% of patients, with complication rate of drainage about 16% and mortality about 4% (39). Complications of tube drainage are spillage the necrotic detritus and infection in pleura with formation of pyopneumothorax, empyema or bronchopleural fistula or bleeding. 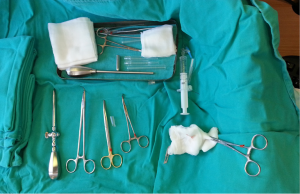 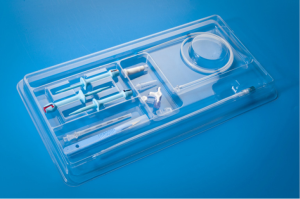 The usage of intra-cavitary fibrinolytic agents (streptokinase, urokinaze) is not recommended, due to possibility of bronchopulmonary or bronchopleural fistula can occur (44). Average duration for tube drainage of lung abscess is about 10-16 days, and in case of prolong air leak, tube can be attach to Heimlich valve (Figures S1,S2). 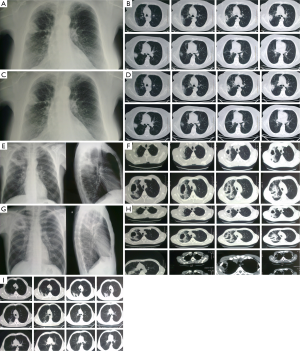 In case of pleural space obliteration, with peripheral localisation of lung abscess, it is possible to perform pneumostomy or cavernostomy-open drainage of abscess (Monaldi procedure) but due to its invasiveness seldom is performed (35).

Lobectomy is the resection of choice for large or central position of abscess. Atypical resection or segmentectomy are satisfactory procedures, if it is possible to remove complete abscess and if necessary surrounding lung tissue with necrotizing pneumonia (45).

Results of surgical treatment depend mostly of general condition and immunity of patient. Elderly patients, malnutrition and alcoholism are poor prognostic factors. Mortality rate after surgical resections is about 11-28% (35).

Minimal invasive surgical procedures, such as video assisted thoracoscopy is a method of choice for peripheral localization of lung abscess and without pleural adhesions and fibrothorax. Results of this surgical procedure are satisfactory, but this intervention requires general anesthesia, double lumen endotracheal tube or single-lumen endotracheal tube with insufflation of carbon dioxide. One of the possible complications is spillage of necrotic detritus in pleural cavity (46).