The anti-inflammatory effect of PPARγ is related to the inhibition of various inflammatory pathways, including the nuclear factor-kappa B (NF-κB) pathway (8,10). Activation of extracellular signal-regulated kinases 1/2 (ERK1/2) is associated with LPS-induced mastitis (11,12), acute lung injury (13), and proinflammatory cytokine release (14). Some studies have suggested the possibility that LPS modulates both the ERK1/2 and PPARγ signaling pathways, although there is little information on the association or interaction between these pathways in LPS-induced inflammation and peritonitis.

The interaction between cyclin-dependent kinase (CDK)5 and ERK/PPARγ, however, is known to control and enrich the roles of PPARγ in cellular modulation (15,16). In Alzheimer’s disease, LPS has been reported to induce tau-phosphorylation in a CDK5-dependent manner (17). The present study was performed to investigate the association of the ERK/CDK5 axis and PPARγ in LPS-induced peritonitis in vitro, with the aim of providing novel insights into the pathogenesis of LPS-induced peritonitis.

We present the following article in accordance with the MDAR reporting checklist (available at http://dx.doi.org/10.21037/atm-21-1623).

CDK5 small interfering RNA (siRNA) and scrambled sequence were purchased from Genechem Co. Ltd. (Shanghai, China) and transfected into HPMCs using Lipofectamine 2000 reagent (Santa Cruz, CA, USA) according to the manufacturer’s instructions. The target sequence of CDK5-siRNAs was #266: 5'-AAUCUUUUCCAGUUUCUCGUA-3', #406: 5'-ACAGAAACAGGGUUUUCUCAU-3', #809: 5'-AAUAUCGUGCUGUAGUAUCAU-3'. Cells were incubated in DMEM with 5% CO2 at 37 °C for 24 hours.

To inhibit ERK signaling, HPMCs were treated with 1 µM AZD0364 (Sigma-Aldrich; Merck KGaA) (18) for 4 hours, followed by LPS treatment. Each experiment was performed with 3 independent replications.

Cells were treated with LPS for 12 hours. Interaction between CDK5 and ERK1/2 was detected by co-immunoprecipitation (co-IP) assay using a Pierce® Co-IP Kit (Thermo Scientific Inc.; #26149). Total protein (1 mg) from the lysate was mixed with 2 µg of ERK1/2 antibody in a column at 4 °C overnight. The immune complexes were analyzed by western blot with the indicated antibodies. Immunoglobulin G (IgG) was employed as the normal control.

All data were expressed as mean ± standard deviation (SD) of 3 replicates. Statistical analyses were performed with SPSS 20.0 software (IBM, USA). The Student’s t-test was employed to analyze differences between groups. Statistical significance was recognized as P<0.05.

First, we determined whether LPS could dose-dependently induce the upregulation of inflammatory cytokines (IL-1β, IL-6, and IL-12) in HPMCs. ELISA assay demonstrated that treatment with more than 0.05 µg/mL LPS for 12 hours significantly elevated the contents of IL-1β, IL-6, and IL-12 compared with the control (0 µg/mL LPS; P<0.01, Figure 1A). No continuous or obvious increase in IL-1β and IL-6 was induced by 5 µg/mL LPS, while 10 µg/mL LPS reversed the increasing trend in the contents of the cytokines. Similar trends were observed for CDK5 expression detected by qRT-PCR (Figure 1B) and for PPARγSer273 phosphorylation detected by western blot (Figure 1C). Therefore, 1 µg/mL LPS induced the highest levels of inflammation, along with the highest levels of CDK5 expression and PPARγ phosphorylation. 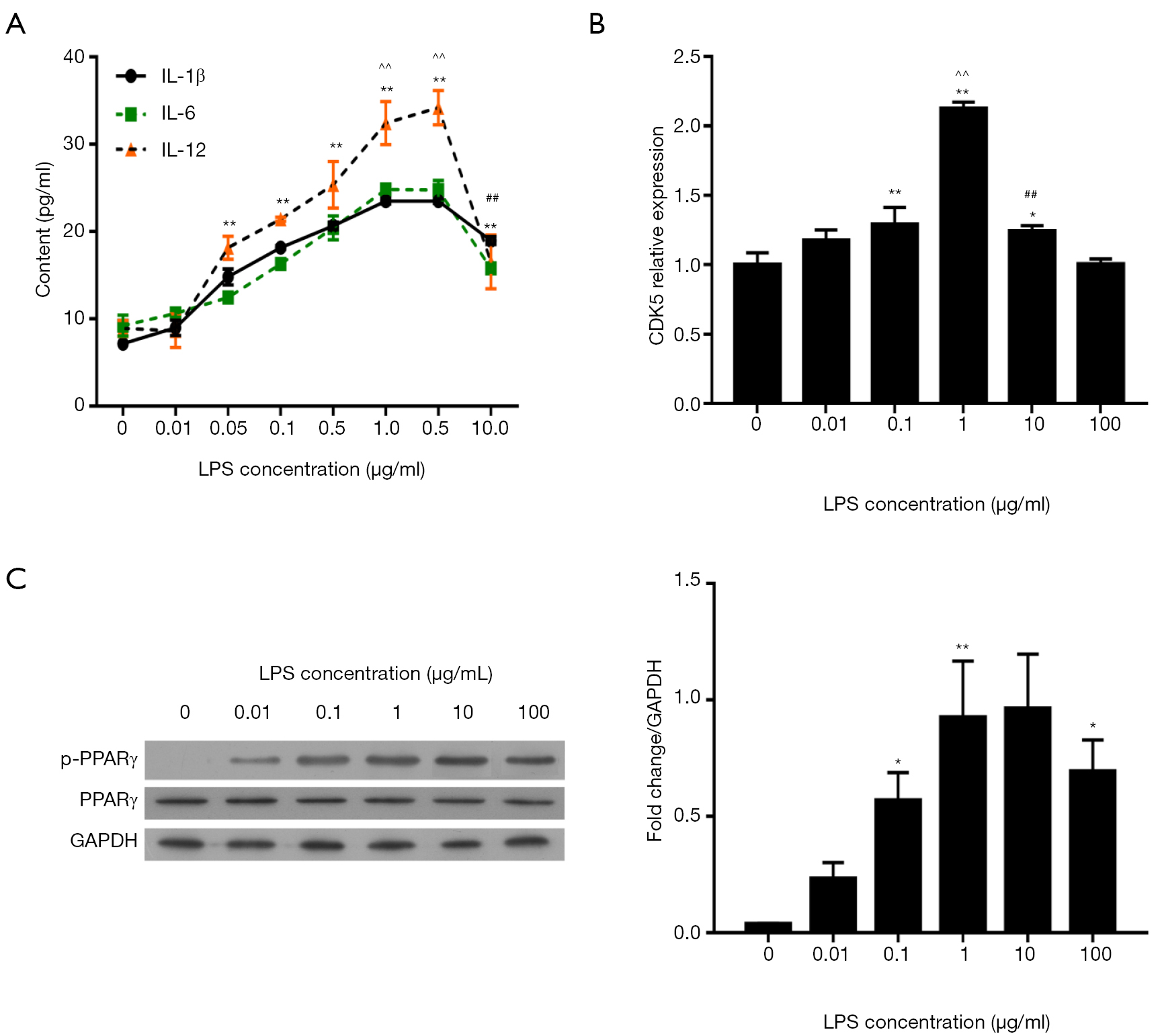 Figure 1 LPS induces inflammation in a dose-dependent manner. (A) ELISA assay to determine IL-1β, IL-6, and IL-12 content in HPMCs under the administration of LPS at different concentrations. (B) qRT-PCR of CDK5 mRNA expression under the indicated treatments. (C) Western blot analysis of the levels of PPARγ and its phosphorylation under the indicated treatments, along with quantitative analysis of p-PPARγ/total PPARγ. *P<0.05 vs. control (0 µg/mL). **P<0.01 vs. control. ^^P<0.01 vs. the neighbor (0.5 or 0.1 µg/mL). ##P<0.01 vs. 1 µg/mL. ELISA, enzyme-linked immunosorbent assay; LPS, lipopolysaccharide; CDK5, cyclin-dependent kinase 5; PPARγ, peroxisome proliferator-activated receptor γ. 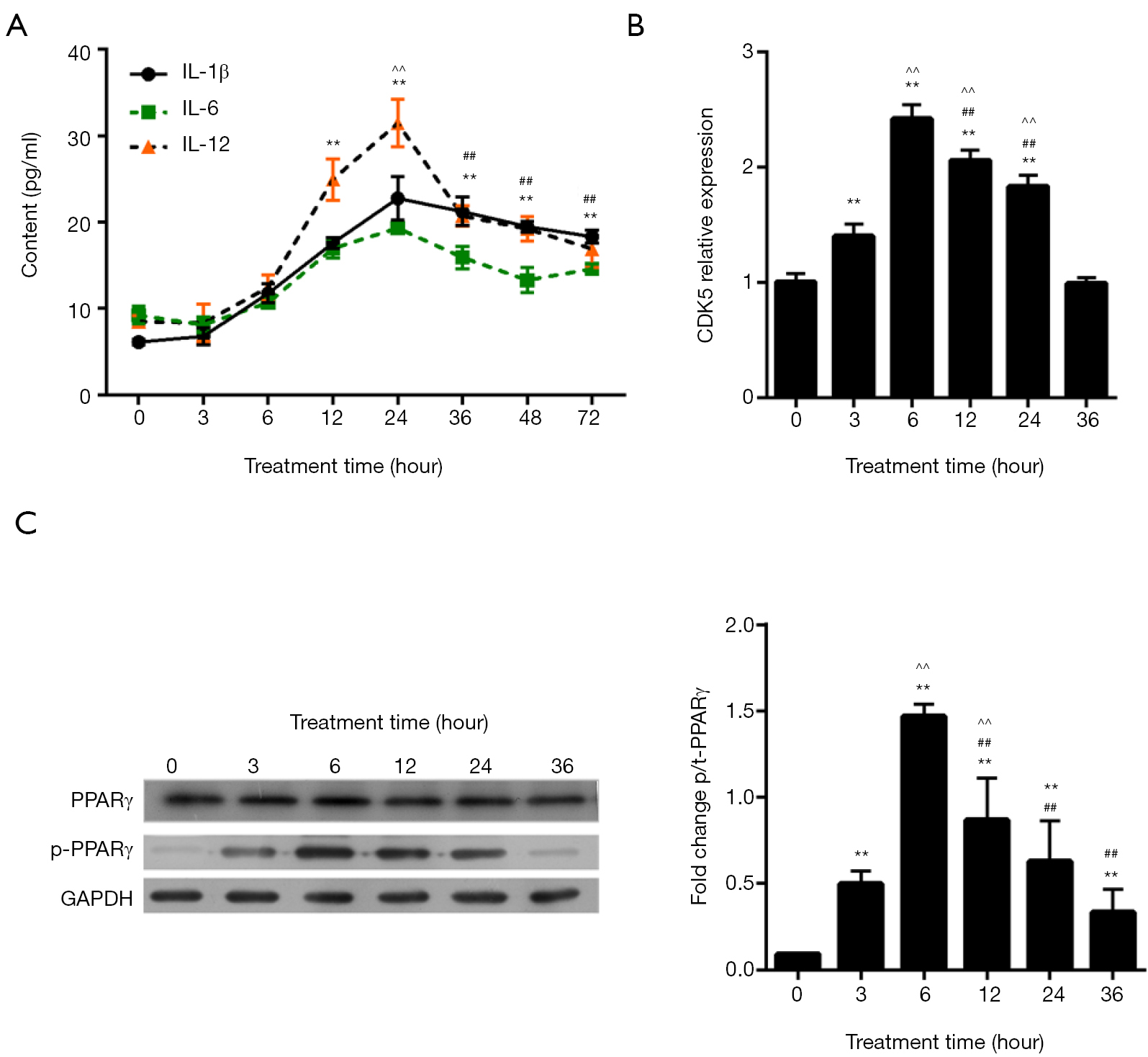 Figure 2 LPS induces inflammation in a time-dependent manner. (A) ELISA assay to determine IL-1β, IL-6, and IL-12 content in HPMCs under the administration of LPS under different treatment times. (B) qRT-PCR assay of CDK5 mRNA expression under the indicated treatment times. (C) Western blot analysis of the levels of PPARγ and its phosphorylation under the indicated treatment times, along with quantitative analysis of p-PPARγ/total PPARγ. **P<0.01 vs. control (0 hours). ^^P<0.01 vs. the neighbor (3, 6, or 12 hours). ##P<0.01 vs. the highest value (24, 36 hours). ELISA, enzyme-linked immunosorbent assay; LPS, lipopolysaccharide; CDK5, cyclin-dependent kinase 5; PPARγ, peroxisome proliferator-activated receptor γ.

ERK1/2 activation has been reported to be related to LPS-induced inflammation (19). To identify the association between ERK1/2 and CDK5 in LPS-treated HPMC cells, we examined the effect of LPS on the activation of ERK1/2. The results showed that LPS (1 µg/mL, 12 hours) increased the mRNA and protein expression of CDK5, as well as ERK1/2 phosphorylation (Figure 3A,B). Furthermore, using a co-IP assay, we observed the interaction between CDK5 and ERK1/2 proteins, which was strengthened by the administration of LPS (Figure 3C). Together, these results suggested that LPS activated ERK1/2 signaling and interaction between ERK1/2 and CDK5 proteins. 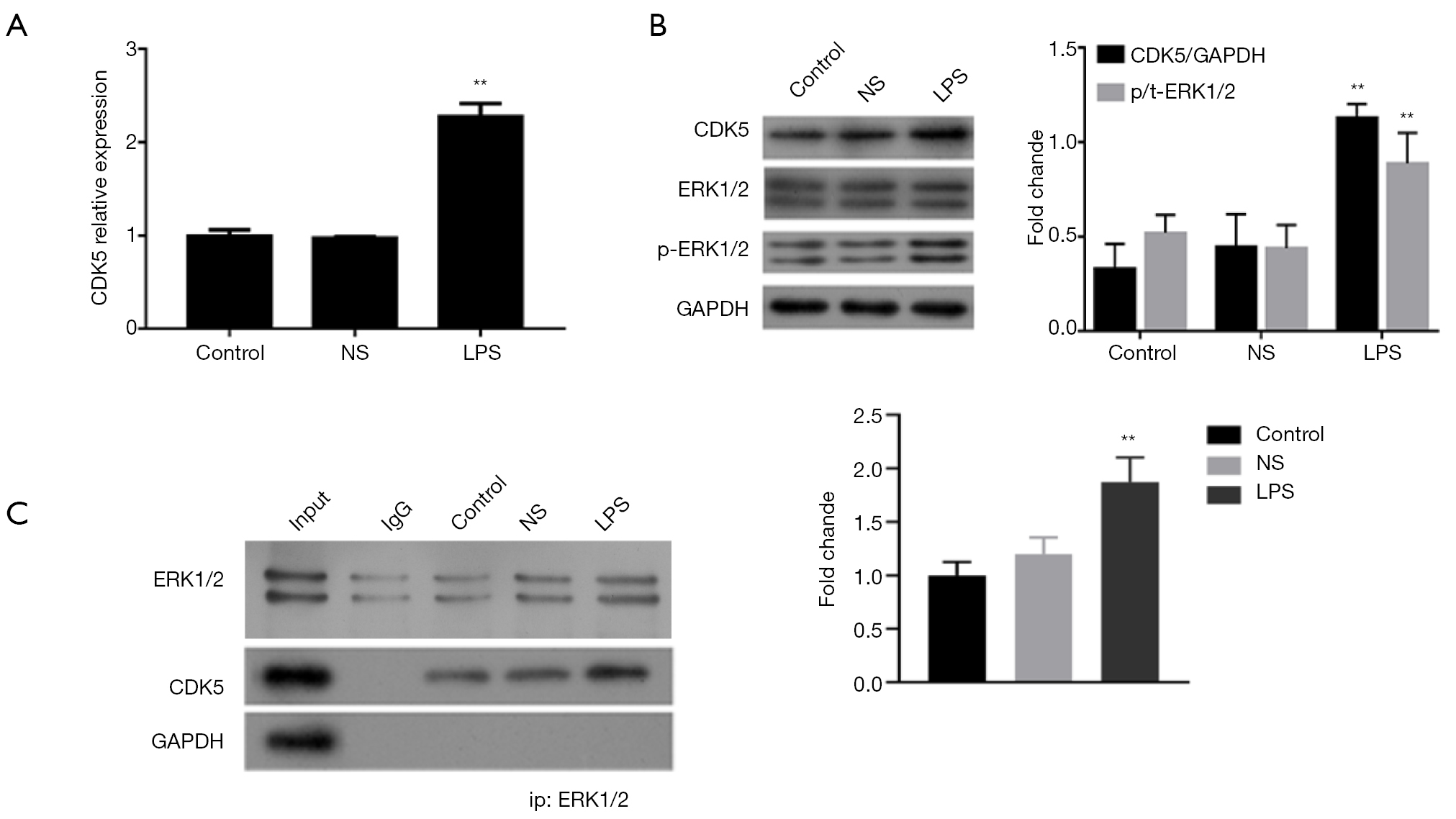 Figure 3 LPS induces the activation of ERK1/2 and enhances ERK1/2-CDK5 interaction. (A) The relative expression level of CDK5 mRNA detected by qRT-PCR under the indicated conditions. (B) Western blot analysis of the expression levels of CDK5, ERK1/2, and phosphorylated ERK1/2, along with quantitative analysis of CDK5/GADH and p-ERK1/2/total ERK1/2 under the indicated conditions. **P<0.01 vs. control. (C) Co-IP assay was used to detect the interaction between ERK1/2 and CDK5 under control or LPS treatment. LPS, lipopolysaccharide; ERK1/2, extracellular signal-regulated kinases 1/2; CDK5, cyclin-dependent kinase 5. 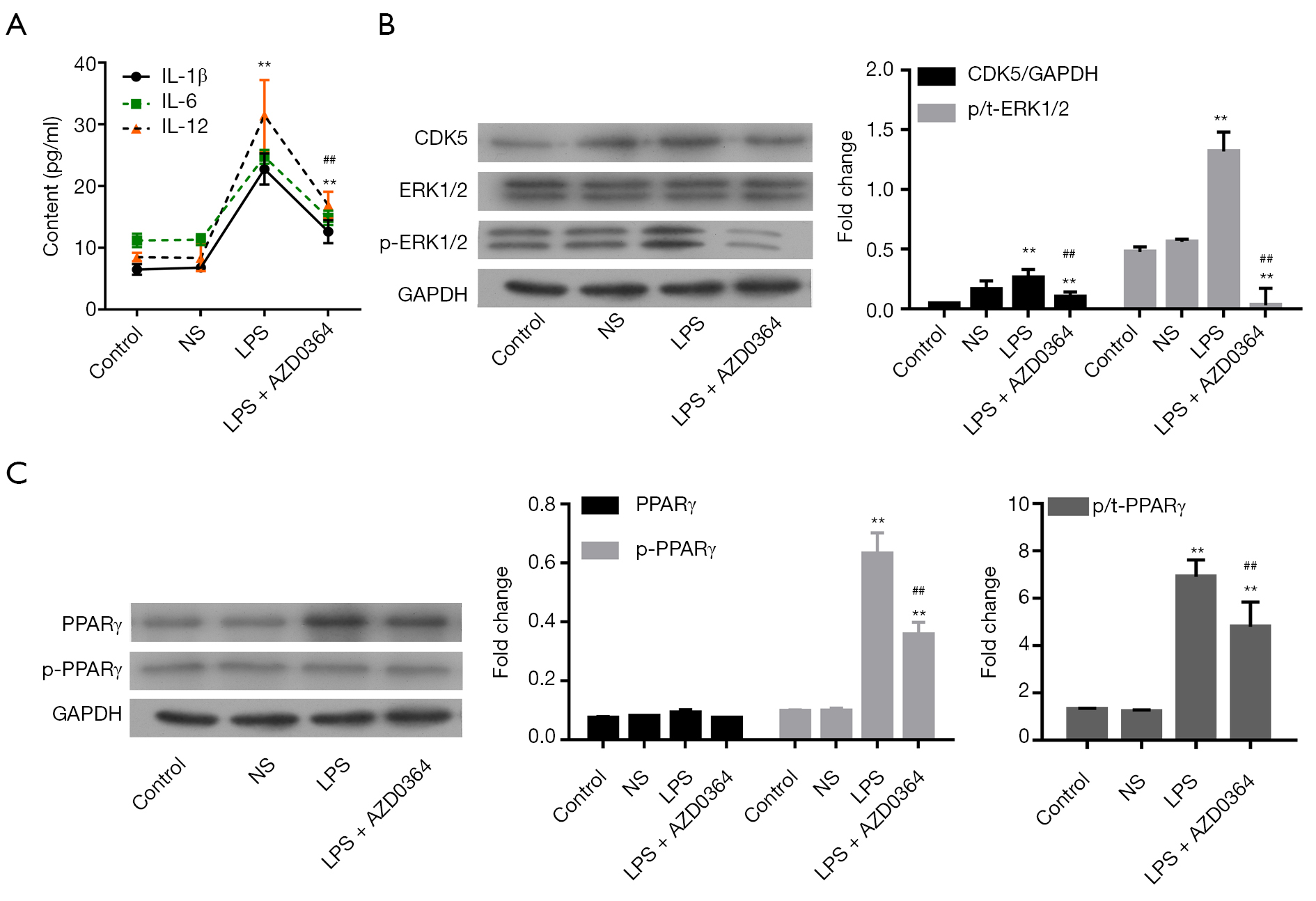 To investigate the relationship of CDK5 with ERK1/2 and PPARγ in LPS-induced inflammation, we knocked down the expression of CDK5 in HPMC cells with its siRNAs (siRNA-266/809). As shown in Figure 5A, the expression of CDK5 was significantly inhibited in siRNA-transfected cells. Our subsequent results showed that siRNA-809 inhibited IL-1β, IL-6, and IL-12 production (P<0.01, Figure 5B), CDK5 expression (P<0.01, Figure 5C), and PPARγ phosphorylation (P<0.01, Figure 5D), but had no effect on ERK1/2 phosphorylation (Figure 5C). These results indicated that CDK5 acted as downstream of ERK1/2 and upstream of PPARγ during LPS-induced inflammation and that an ERK1/2-CDK5-PPARγ axis was implicated in this process. 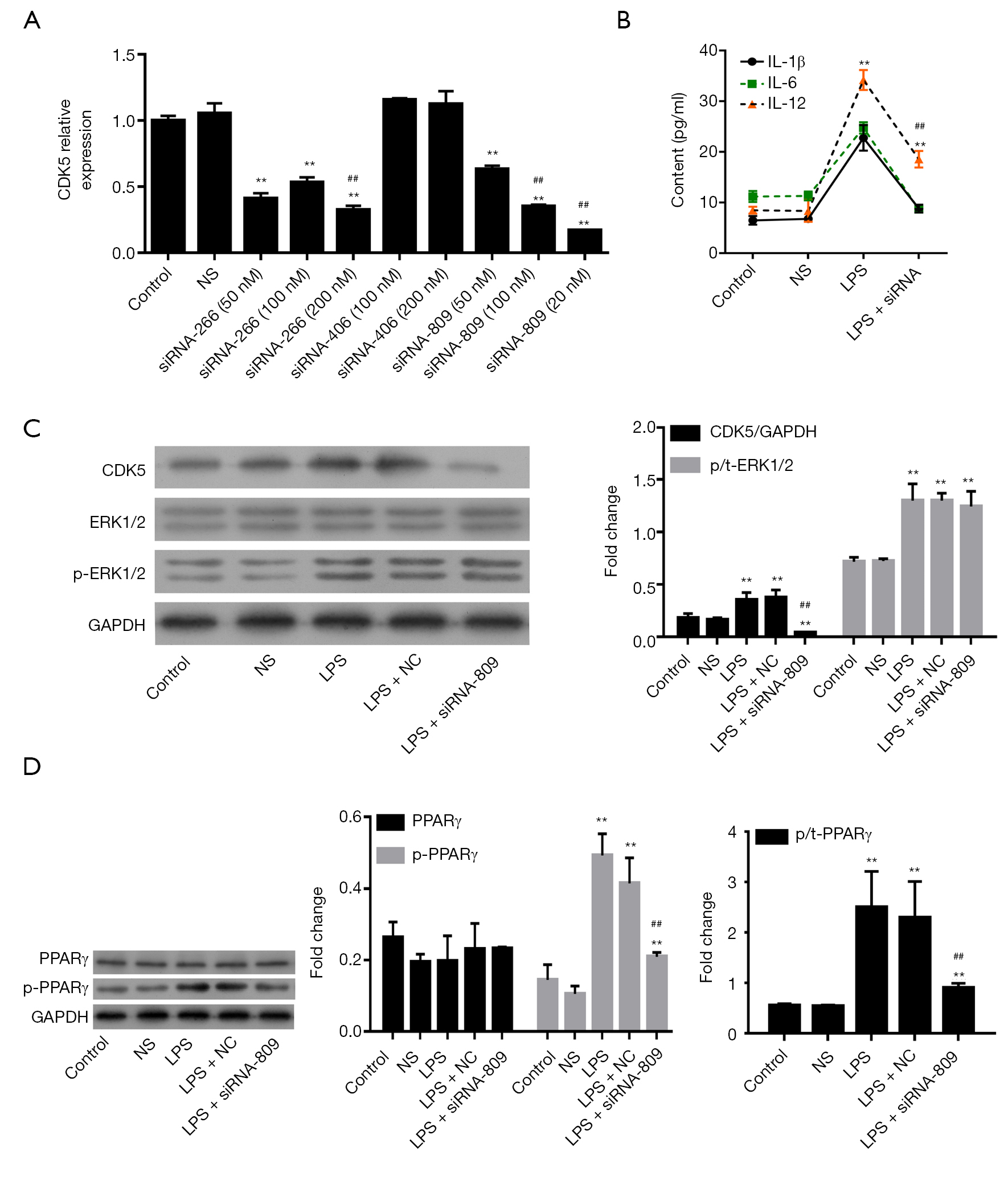 By treating HPMCs with different concentrations of LPS, we found that treatment with 1 µg/mL LPS for 12 hours was the optimal experimental design in vitro. At 12 hours, 1 µg/mL LPS treatment induced the most severe inflammatory status in HPMCs of any treatment time. Overdose of LPS or an long treatment time decreased the production of the inflammatory cytokines IL-1β, IL-6, and IL-12, as well as the levels of CDK5 expression and PPARγ phosphorylation (Figures 2 and 3). Of note, it is possible that CDK5 and PPARγ functioned in the early stage of LPS-induced inflammation and contributed to the subsequent production of inflammatory cytokines (Figure 2). Previous studies have reported that PPARγ is an anti-inflammatory ligand (8,9). Together with its agonists, PPARγ inhibits the production of monocytic inflammatory cytokines, including IL-1β, IL-6, and TNF-α, thus preventing inflammatory injury (26,27). However, some researchers have arrived at a different conclusion, reporting that PPARγ does not inhibit LPS-induced IL-6 or TNF-α production in macrophages (28). Therefore, it is possible that the progression of LPS-induced inflammation is promoted by PPARγ phosphorylation.

The involvement of the ERK1/2 pathway in LPS-induced IL-6 production has been revealed previously by Yu et al. (14), who showed that LPS activated the ERK1/2 pathway to induce IL-6 mRNA expression (14). It has also been reported that IL-6-mediated proliferation and maintenance of stemness in mesenchymal stem cells require the activation of ERK1/2 (29). However, the direct participation of PPARγ in ERK1/2-mediated IL-6 expression has not been evidenced before. Our results demonstrated that the inhibition of ERK1/2 or knockdown of CDK5 prevented the LPS-induced production of the inflammatory cytokines IL-1β, IL-6, and IL-12, partly through the regulation of PPARγ phosphorylation.

Our study has demonstrated that LPS-induced inflammation in HPMCs could be prevented by inhibiting an ERK1/2-CDK5-PPARγ axis. Further study should be carried out to validate the essentiality of PPARγ in ERK1/2/CDK5 axis-modulated inflammation.

Reporting Checklist: The authors have completed the MDAR reporting checklist. Available at http://dx.doi.org/10.21037/atm-21-1623

Conflicts of Interest: All authors have completed the ICMJE uniform disclosure form (available at http://dx.doi.org/10.21037/atm-21-1623). The authors have no conflicts of interest to declare.