LncRNAs are roughly defined as non-coding RNA molecules with a transcript length of more than 200 nt that lack protein-coding ability but nevertheless function as RNAs (5). LncRNAs were originally considered to be “transcriptional noise”, however, they are now known to be biologically active molecules involved in important mechanisms that regulate gene expression. Notably, lncRNAs are predominantly found in vascular cells and are correlated with vascular functions (6). One study demonstrated that the proliferation and apoptosis of vascular smooth muscle cells were regulated by lncRNAs (7). Another study has confirmed that the lncRNA NONHSAT073641 can promote the proliferation of vascular endothelial cells (8). However, lncRNA expression profiles in various pulmonary artery cells under hypoxic conditions, and particularly in PCs, have not been reported.

Therefore, in this study, we comprehensively described and compared abnormalities in lncRNA expression profiles of pulmonary artery smooth muscle cells (PASMCs), pulmonary microvascular endothelial cells (PMECs), and PCs under normoxic and hypoxic conditions using high-throughput sequencing technology. In addition, bioinformatics analysis, including Gene Ontology (GO) analysis, Kyoto Encyclopedia of Genes and Genomes (KEGG) pathway analysis, and the prediction of lncRNA-miRNA mechanisms of action, were performed to provide basic data for future studies on the role of lncRNAs in the pathogenesis of PH. We present the following article in accordance with the MDAR reporting checklist (available at http://dx.doi.org/10.21037/atm-21-2040).

All procedures followed were in accordance with the ethical standards of the responsible committee on human experimentation (institutional and national) and with the Helsinki Declaration (as revised in 2013). Shanghai Pulmonary Hospital reviewed and approved the protocol form prior to initiation of the study (approval number, K20-195Y).

Human PASMCs, PMECs, and PCs were acquired from Science Cell (Shanghai, China) and were cultured in smooth muscle cell medium, endothelial cell culture medium, and pericyte medium containing 4 mM L-glutamine and 10% fetal bovine serum, respectively. Cells were cultured under normoxia and hypoxia in a humidified incubator. The condition of normoxia was 37 °C with a 95% air, 5% CO2 mixture. Hypoxia was induced in PASMCs, PMECs, and PCs by incubating them in a gas mixture containing 92% N2, 5% CO2, and 3% O2 for 24 h. Before each experiment, cells were starved for 6 h in serum-free medium.

All sequencing procedures and analyses were performed by OEbiotech (Shanghai, China) and differentially expressed genes were identiﬁed using DESeq software (10). The different expressions of mRNAs with the fold changes (FC) ≥2 or ≤0.5 and P<0.05 were analyzed in three paired groups. The GO terms and KEGG pathways with P<0.05 were considered signiﬁcantly enriched.

Statistical analysis was performed using negative binomial distribution to compare high-throughput sequencing data from the two groups of samples. Differences with fold FC ≥2 or ≤0.5 and P<0.05 were considered statistically significant. The false discovery rate was calculated to correct the P value on analysis. For real-time PCR analysis, the results are the means of at least three independent experiments ± SE, and the expression level of each lncRNA was represented as FC using the 2−△△Ct method. P values <0.05 were considered statistically significant.

The volcano plot and heatmap of lncRNAs in PASMCs, PMECs, and PCs are provided in Figure 1. The volcano plot showed significant variation in lncRNA expression between both groups. Between normoxic and hypoxic PASMCs, 276 genes were differentially expressed, which corresponded to 140 upregulated genes and 136 downregulated genes. Among these, lncRNA XLOC_004748 (chr 12:22685844-22700706) showed the highest upregulation, while lncRNA LOC105376095 (chr 9:76608665-76652293) was the most downregulated gene, with an 0.009-fold change. The most upregulated and downregulated lncRNAs in PASMCs are listed in Figure 1A. 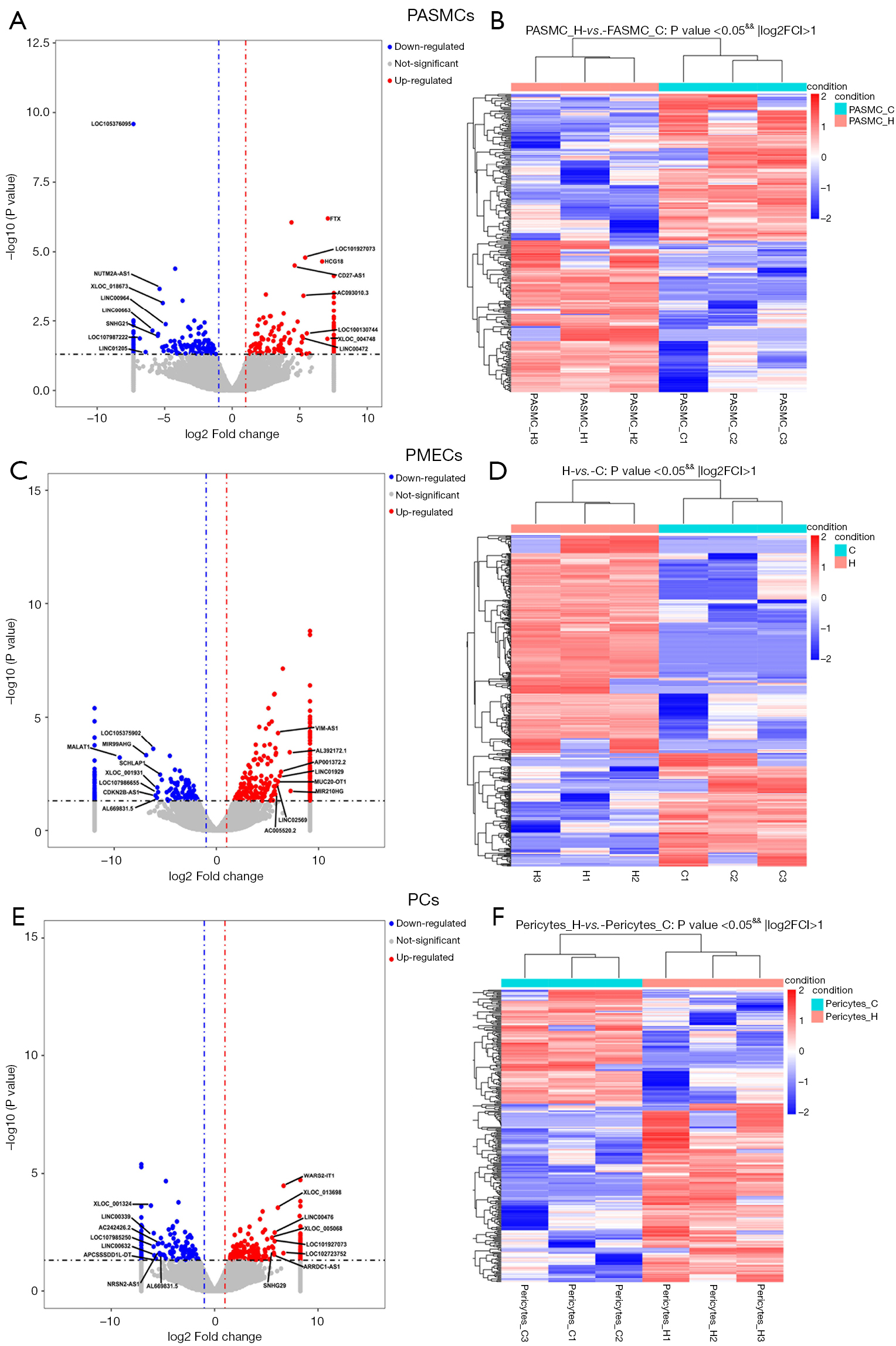 Categories of differentially expressed lncRNAs in PASMCs, PMECs, and PCs 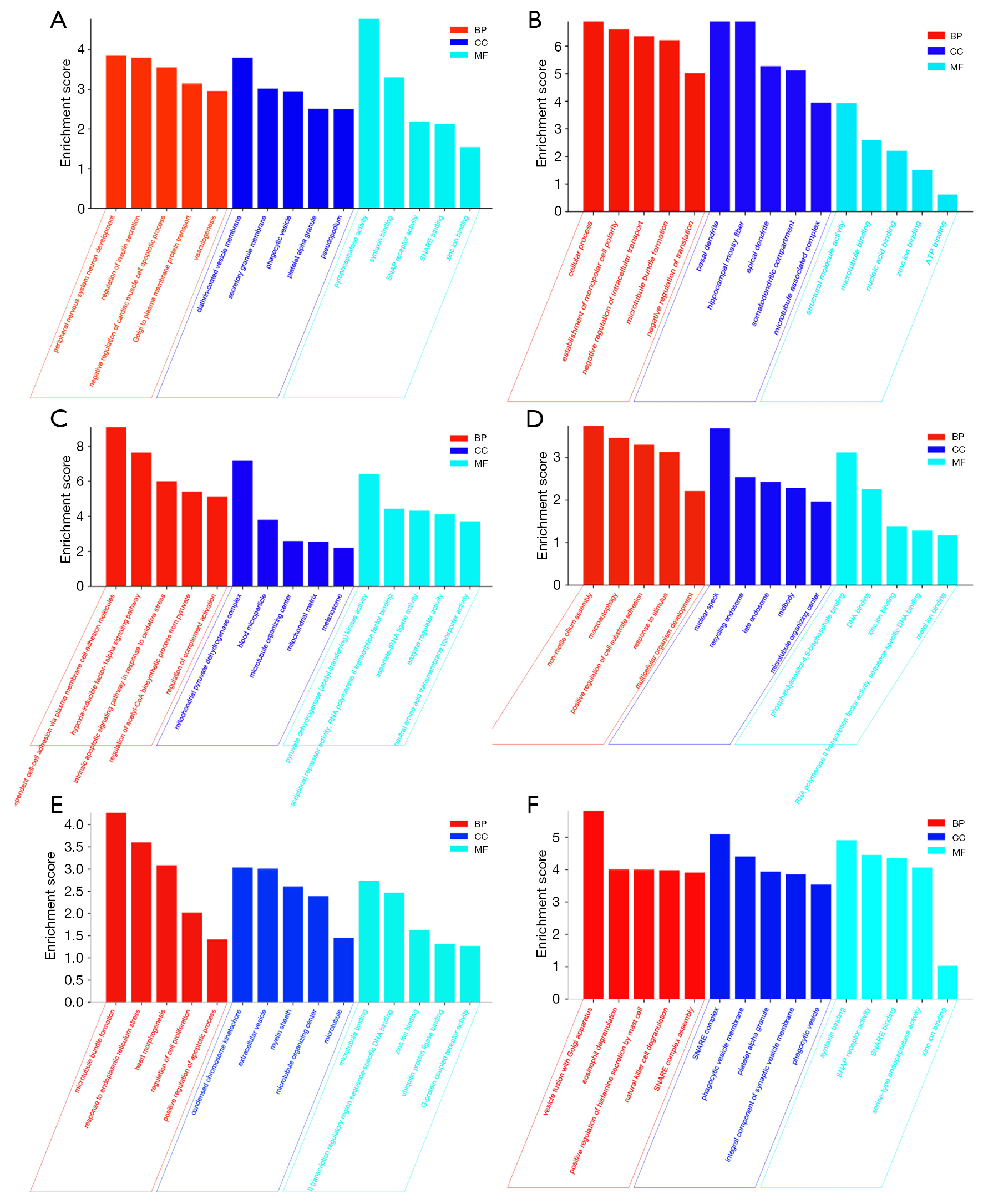 KEGG pathway analysis showed that the upregulated lncRNAs in PASMCs were involved in 20 pathways, including microRNAs in cancer, the phospholipase D signaling pathway, the MAPK signaling pathway, hypertrophic cardiomyopathy (HCM), and dilated cardiomyopathy (DCM), among others (Figure 4A). The downregulated lncRNAs did not appear to be associated with any particular pathway. 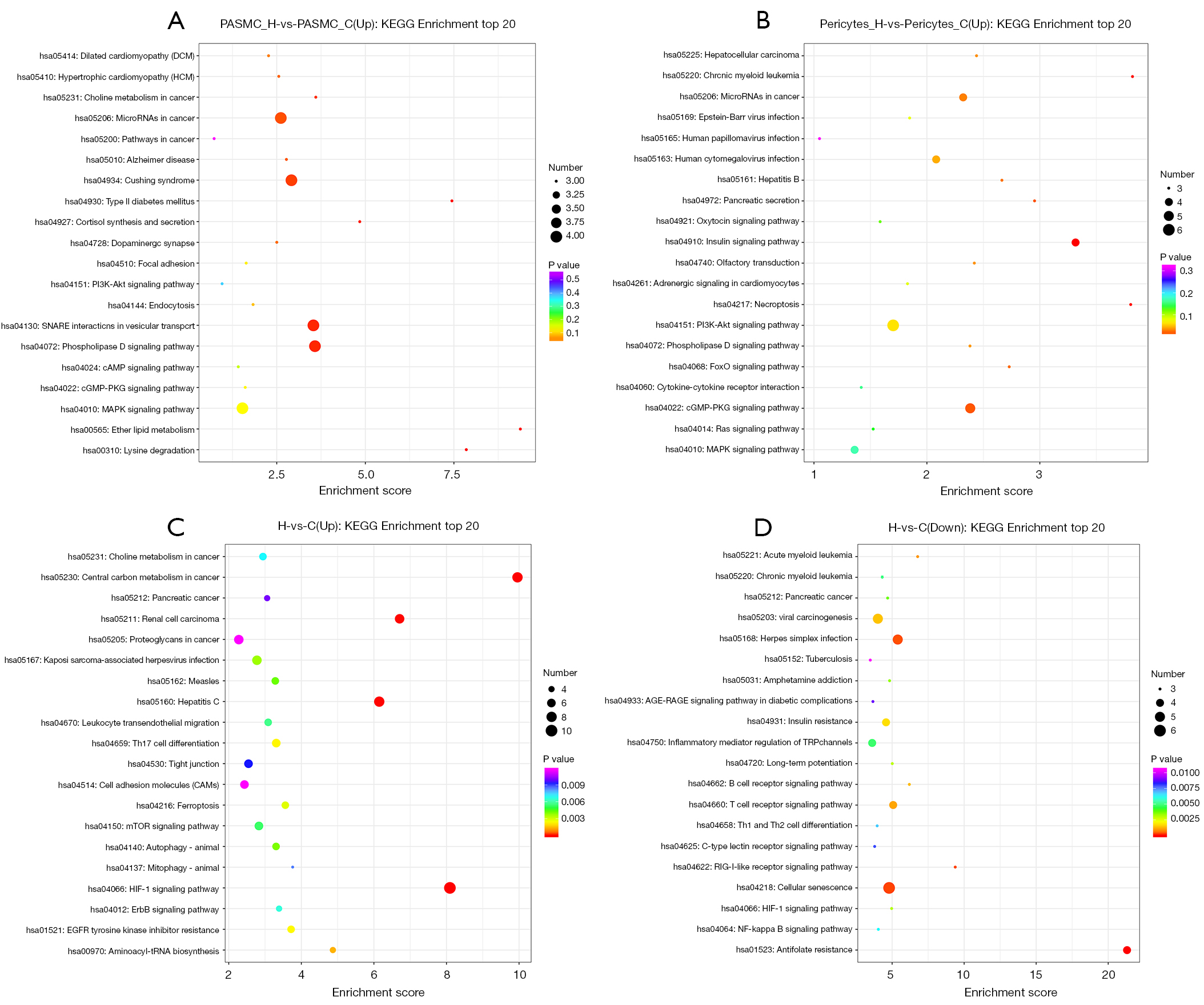 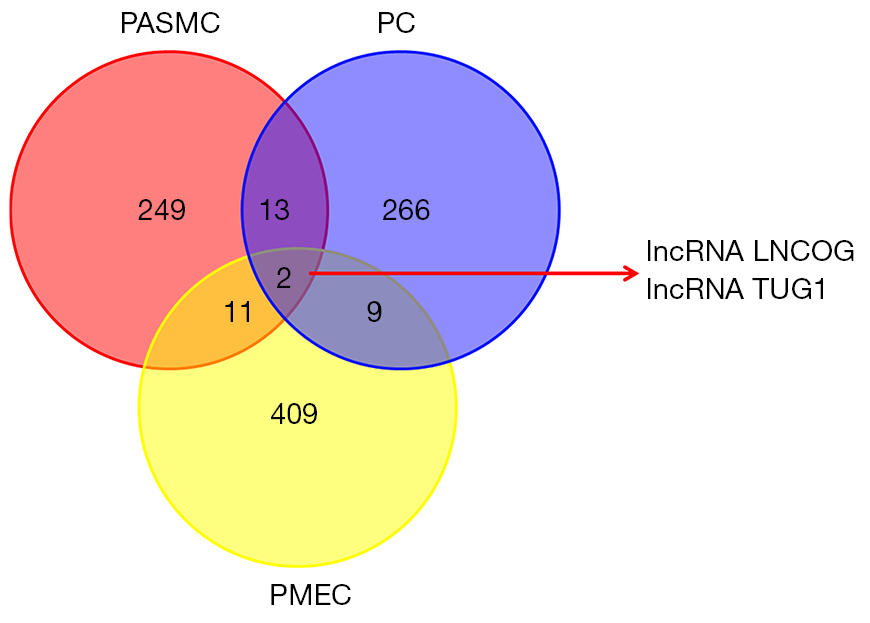 To verify data on differential expression, lncRNA TUG1 and lncRNA LNCOG were selected as representative genes for further validation by real-time PCR. The expression of these dysregulated lncRNAs was investigated in all 3 cell types, and real-time PCR results showed that lncRNA TUG1 expression was consistent with that obtained using sequencing data, suggesting the high reliability of sequencing. The real-time PCR results of lncRNA LNCOG were contrary to the sequencing results, and the underlying reasons for such a discrepancy need further exploration (Figure 6A,B,C, all P<0.05). Specifically, lncRNA TUG1 was upregulated in PASMCs and PCs but downregulated in PMECs (Figure 6D,E,F, all P<0.05). Heatmap of lncRNA LNCOG and lncRNA TUG1 in hypoxia-induced PASMCs, PMECs, and PCs are shown in Figure 6G,H,I. 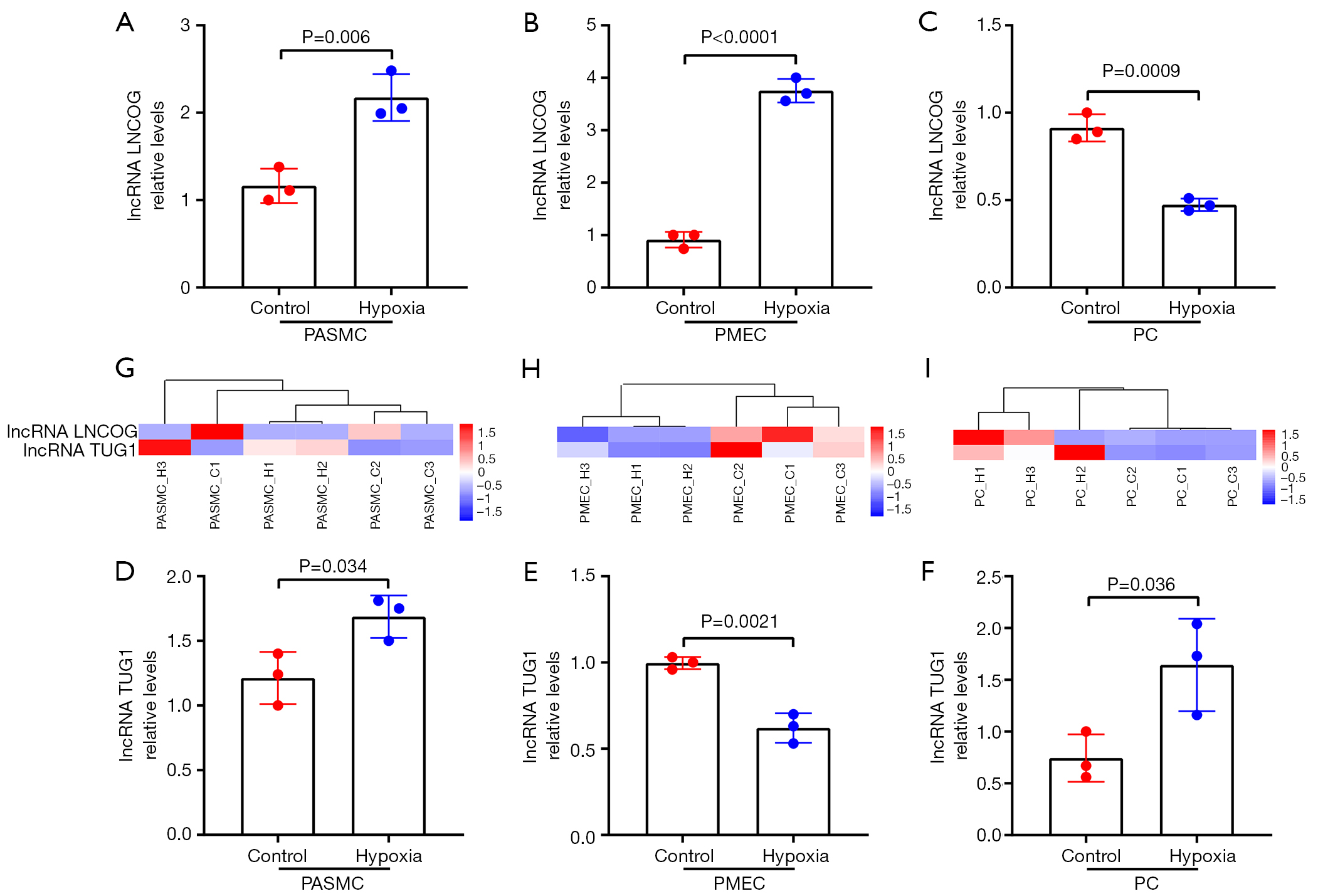 To the best of our knowledge, this is the first description of the differential expression of lncRNAs in PASMCs, PMECs, and PCs under hypoxic conditions. However, there were significant differences in lncRNA TUG1 expression among the three types of cells, and the trends were not consistent. LncRNA TUG1 was upregulated in PASMCs and PCs, but downregulated in PMECs.

PH has become a public health problem that seriously threatens human physical and mental health (11). Accumulating research on the pathogenesis of HPH, along with the emergence of data from high-throughput sequencing, biochemical, and computational biology methods, has revealed that several types of non-coding RNAs, such as lncRNAs and miRNAs, participate in the pathophysiological processes underlying PH development, and that some of these molecules represent potential diagnostic or therapeutic targets (12,13). Although currently reported in PASMCs and PMECs, and there are no reports on differential lncRNA expression and function of the three types of pulmonary artery cells together. Specifically, pertinent data on PCs has never been reported, and we show extensive differential expression of lncRNAs in PCs. It has been previously reported that lncRNA MEG3 is downregulated in hypoxic PASMCs, but that lncRNA H19 is highly expressed in the lungs of rats/mice with monocrotaline-induced PH, which can promote the proliferation of PASMCs (14-16). This trend is consistent with our sequencing results. We also did not find any differential expression in other reported lncRNAs. We think that there may be several reasons for this discrepancy. First, there are relatively few studies about lncRNAs in PH, and second, differences in cells may also contribute to these discrepancies, and last, different anoxia method used between in the present study and the previous study may one reason leading to this discrepancy (3).

Next, GO analysis showed that processes such as cell proliferation and positive regulation of apoptotic process are associated with the abnormal proliferation of PASMCs and PMECs during the pathogenesis of PH (17). Furthermore, KEGG pathway analysis also showed that multiple pathways, including the MAPK, CGMP-PKG, HIF-1, and PI3K-Akt signaling pathways, were significantly enriched among the upregulated lncRNAs. Notably, several studies found that knocking out lncRNA TCONS_00034812 promoted proliferation and inhibited apoptosis of PASMCs through several above-mentioned signaling pathways in PH (18-20).

LncRNA MEG3 was downregulated in hypoxic PASMCs (15), while lncRNA TUG1 was highly expressed in HPH mice and HPH-PASMCs (21). Our results show that lncRNA TUG1 is upregulated in PASMCs and PCs but downregulated in PMECs, and that it plays an important role in hypoxia cellular models. Other lncRNAs have not been studied in-depth and their specific roles remain to be elucidated. Moreover, despite numerous studies on differentially expressed lncRNAs in PH, many challenges continue to exist with respect to accurate normalization of lncRNA levels for clinical use among various experiments. Nonetheless, our results indicate the possibility that lncRNAs are likely to participate in the pathogenesis of PH.

Growing evidence indicates that a large portion of lncRNAs can serve as miRNA “sponges”, as they share common miRNA response elements and can influence post-transcriptional regulation by inhibiting available miRNA activity (22). Su et al. (14) have demonstrated that lncRNA H19 is highly expressed in MCT-induced rodent lungs and that it is upregulated in PDGF-BB-induced PASMCs. The lncRNA H19-let-7b-AT1R axis contributes to the pathogenesis of PH by stimulating PASMC proliferation. It has also been reported that lncRNA TUG1 is highly expressed in HPH-PASMCs and that silencing of lncRNA TUG1 downregulates the expression of Foxc1 by binding to miR-374c to inhibit the proliferation and migration of PASMCs, promoting PASMC apoptosis in HPH (21). Real-time PCR results showed that lncRNA TUG1 was significantly upregulated in PASMCs and PCs but downregulated in PMECs, and this is consistent with previous results. Therefore, we predicted miRNA partners of lncRNA TUG1 and verified this in different cells. However, the mechanistic aspects of its role in pulmonary artery cells need further evaluation.

Our study, for the first time, describes the comprehensive expression profiles of differentially expressed lncRNAs in PASMCs, PMECs, and PCs when subjected to hypoxia. Among them, lncRNA TUG1 showed significant upregulation in PASMCs and PCs, but was downregulated in PMECs, which indicated that lncRNA TUG1 could regulate the function of pulmonary artery cells.

Reporting Checklist: The authors have completed the MDAR reporting checklist. Available at http://dx.doi.org/10.21037/atm-21-2040

Conflicts of Interest: All authors have completed the ICMJE uniform disclosure form (available at http://dx.doi.org/10.21037/atm-21-2040). The authors have no conflicts of interest to declare.

Ethical Statement: The authors are accountable for all aspects of the work in ensuring that questions related to the accuracy or integrity of any part of the work are appropriately investigated and resolved. All procedures followed were in accordance with the ethical standards of the responsible committee on human experimentation (institutional and national) and with the Helsinki Declaration (as revised in 2013). Shanghai Pulmonary Hospital reviewed and approved the protocol form prior to initiation of the study (approval number, K20-195Y).