The neonatal period is important for retinal development in the mouse, during which time many retina precursor cells exit from mitosis and develop into mature retinal neurons. For retinal ganglion cells (RGCs), specifically, postnatal day 10 (P10) is quite critical: it is the end stage of RGCs developmental culling process (1); it is the time when the retinal neurotransmitter gamma-aminobutyric acid’s immune reactivity starts to effect RGCs (2); and it is the beginning of the process of eliminating topographic targeting errors of RGCs (3). These processes indicate the variability of RGCs at P10 and an appropriate RGC labeling technique is needed for effective tracking of the cells.

Retrograde fluorogold (FG) labeling is a well-known method of tracking adult RGCs in animal research (4-8), with regard to RGC development, survival and regeneration (9-12). FG is a widely used neuronal tracer that shows persistent RGC labeling. It travels from the superior colliculus (SC) to the RGC soma in rodents within 1 week and persists for several weeks, enabling reliable quantification of RGC density (11). However, there is no evidence that retrograde FG labeling is applicable in neonatal mice, especially P10 mice.

Therefore, the present study was designed to investigate the applicability of retrograde FG for labeling RGCs on P10 mice, including the most suitable injection site and dose of FG.

We present the following article in accordance with the ARRIVE reporting checklist (available at http://dx.doi.org/10.21037/atm-21-2022).

All animal studies were conducted according to the Association for Research in Vision and Ophthalmology (ARVO) Statement for the care and use of animals and approved by the Animal Ethics Committee of Zhongshan Ophthalmic Center, Sun Yat-sen University. Pregnant C57/BL6 mice were provided by the Laboratory Animal Center of the Sun Yat-sen University (Guangzhou, China). Mice were kept on a 12-h light/dark cycle with standard diet provided by the Laboratory Animal Center of Zhongshan Ophthalmic Center. All experiments were performed on P10 mice of either sex. Pups were returned to their dams after FG labeling.

Two P10 mice were killed by overdose of an anesthesia cocktail (100 mg/kg ketamine + 20 mg/kg xylazine) followed by heart perfusion of 5 mL ice-cold PBS and finally 5 mL of 4% paraformaldehyde in PBS. The skin along the midline between ears was incised, the skull was punctured through the bregma toward the brain with a 30G needle to locate the point on the brain under the bregma. The brain was gently dissected free from the skull and placed dorsal surface up in a 35-mm petri dish on ice. Coronal plane and sagittal plane specimens were respectively obtained from three mice brains. Specifically, four coronal specimens were taken from 2.0 to 3.5 mm posterior to the bregma, with 0.5 mm intervals between each, and four sagittal specimens were taken from 0.5 to 2.0 mm lateral to the midline, with 0.5 mm intervals. Specimens were fixed for 48 h in 10% formalin at room temperature, then blocked with paraffin and cut into 3-µm sections, before final staining with H&E, as per standard protocols (13).

In this experiment, 30 P10 C57/BL6J mice were randomly divided into three groups (n=10 mice/group) and injected with three doses of 3% FG (0.3, 0.6, 1.0 µL/injection site). Random numbers were generated using the standard = RAND() function in Microsoft Excel. We selected a small sample size because FG labeling was evaluated in neonatal mice for the first time in the present study, and therefore, the initial intention was to gather basic evidence regarding the use of this method. Briefly, mice were anesthetized by intraperitoneal injection of ketamine (20 mg/kg) and xylazine (3 mg/kg) cocktail. The surgical area was disinfected with 10% povidone iodine solution followed by 70% alcohol. The skin along with the center line of the head was cut with micro scissors to expose the SC area, and then stereotaxic apparatus was used to accurately locate the injection site: 3.0 mm posterior to the bregma and 1.0 mm lateral to the midline. A 26G needle was used to penetrate the skull through the injection site, then replaced with a 30G microneedle to inject FG to a depth of 1.5 mm. The needle remained in place for 2 min after injection to allow dye absorption. The wound was closed with a suture.

Mice were killed with an overdose of ketamine/xylazine cocktail 3 days after labeling. Eyes were enucleated and fixed for 15 min with 4% paraformaldehyde, then the cornea and lens were removed using corneal scissors and toothed forceps. The neural retina was excised and flat-mounted with four cuts, then placed on a microscope slide. Using a fluorescent microscope (Carl Zeiss AG, Oberkochen, Germany), images were obtained at ¼, ½ and ¾ distance from the optic nerve on each retinal petal. FG intensity was quantified by Image J software (NIH). For the retina fluorescence assay, all fluorescence intensities in each quadrant of each group of retinas was normalized to mean levels in the temporal quadrant of the 0.3 µL group. FG-positive cells were counted by two individuals, and the cell density was calculated as cell number/area (mm2).

All data are expressed as mean ± standard error of the mean. Significance was assessed with Student’s t-test for two variable comparisons or by two-way ANOVA of multivariable comparisons using SPSS software (version 13.0; SPSS, Inc., Chicago, IL, USA). All data with P<0.05 were defined as significantly different. Data was analyzed by an individual with no knowledge of the groups. 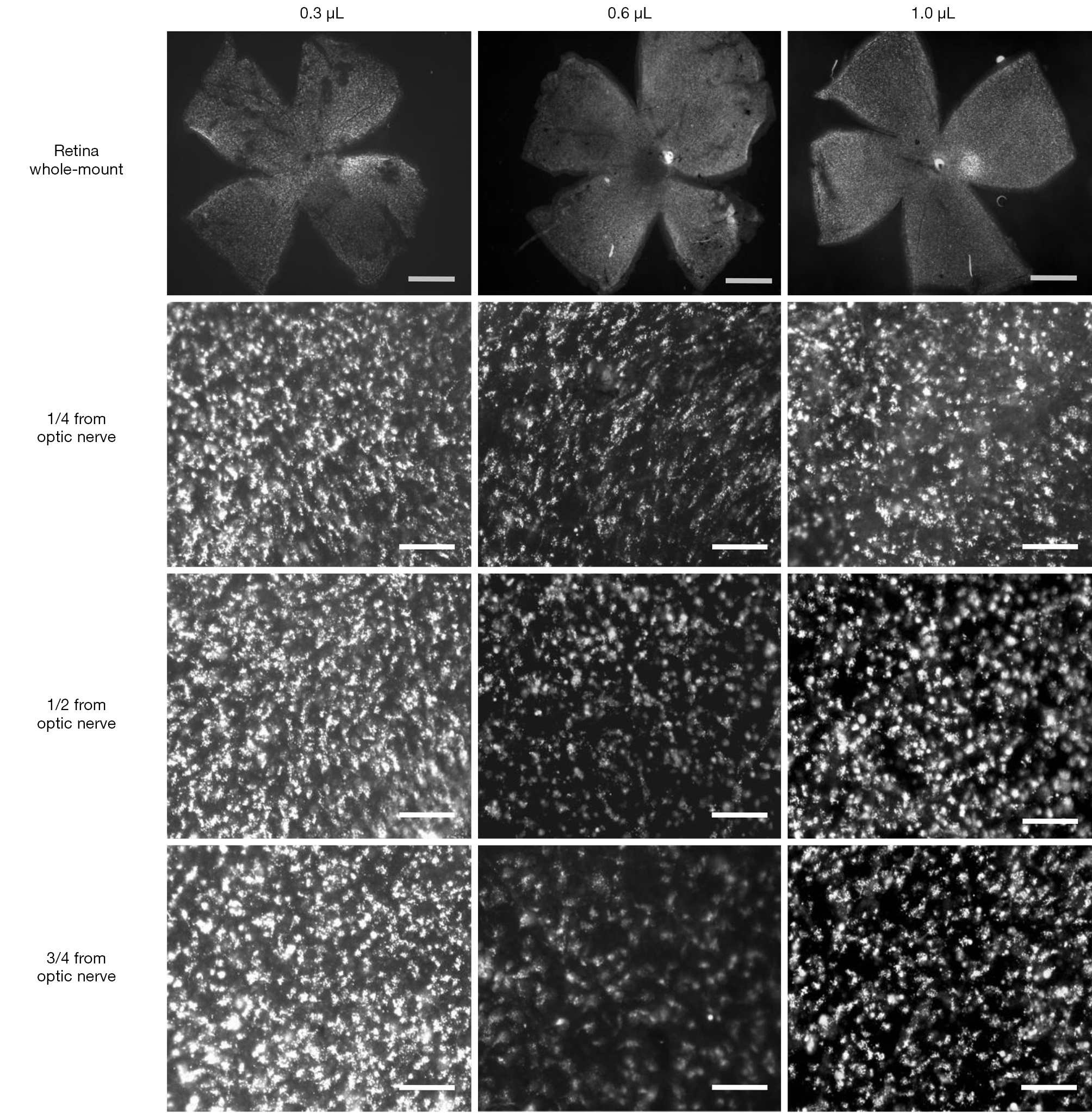 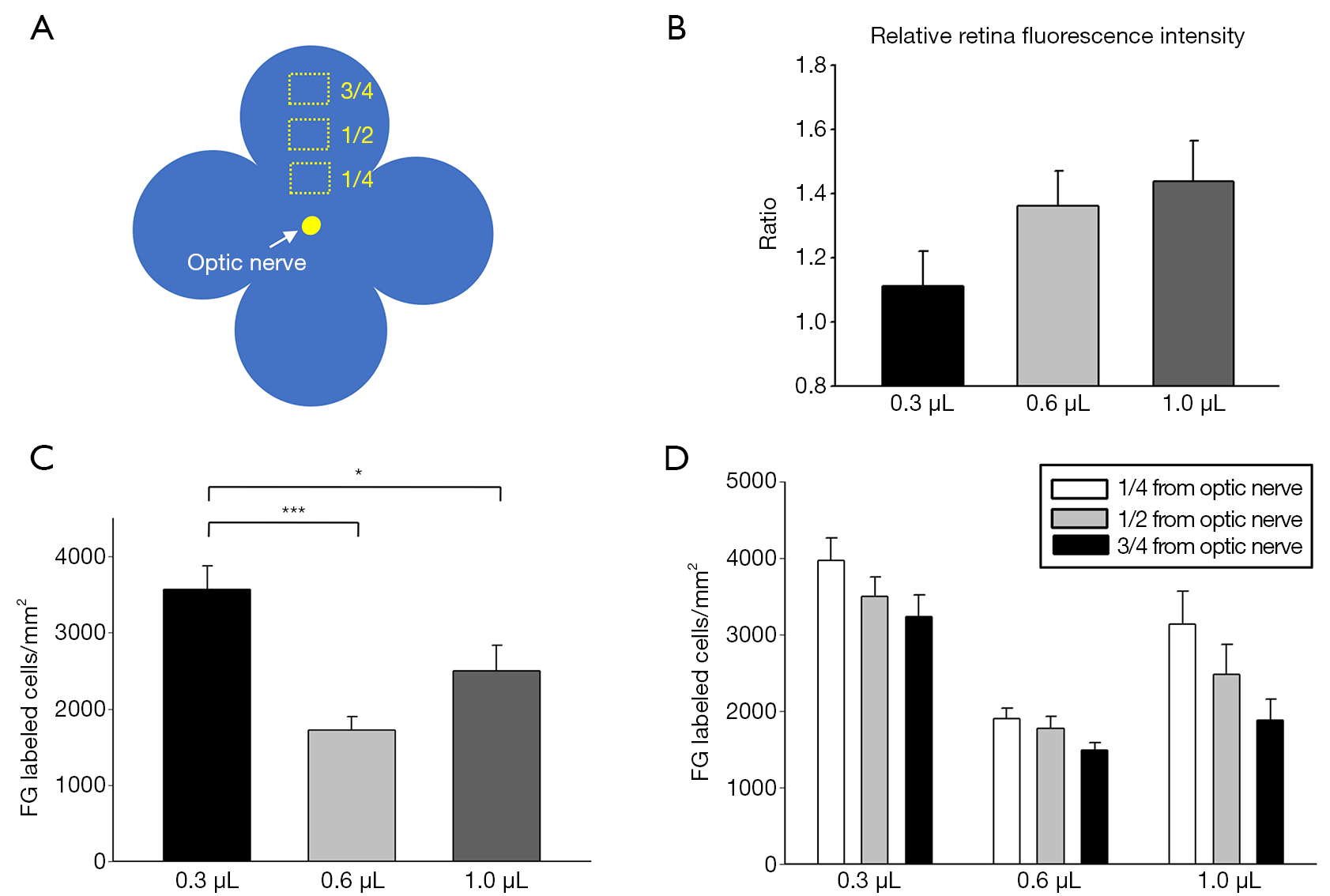 Since its introduction in 1986, FG has been widely used to label RGCs in different animals, but especially the mouse, as the most applicable model for studying RGC development, degeneration and regeneration (15-17). Most of the previous studies focused on the adult mouse, whose RGCs have matured thus making them less preferable for development studies (17) than neonatal mice. P10 is considered as one of the key points for RGCs fate orientation. However, it is hard to retrogradely track RGCs in P10 mice, given the lack of anatomic evidence of the SC region in neonatal mice (18). By analyzing the anatomy of the P10 mice brain, we identified the appropriate injection site; that is, 2–3.5 mm posterior to the bregma point, and 0.5–2.0 mm lateral to the midline. The location is distinctive from the adult SC region, which ranges from 2.54–3.88 mm posterior to the bregma point to 0.6–2.28 mm lateral to the midline.

Successful RGC labeling has two critical elements: the efficiency of RGC labeling and the safety for recipients. Compared with other fluorescent dyes, FG has been demonstrated to be a good retrograde axonal tracer with the properties of intense fluorescence, extensive filling of dendrites, high resistance to fading and no diffusion from labeled cells (11,15). In addition, distinctive from other dyes, it has wide duration of action and compatibility with all other tested neurohistochemical techniques (15). Another factor in effective and safe labeling is the dose of dye, apart from its natural characteristics. Individual dosing according to animal species is needed; for instance, 5.0 µL FG is used for labeling adult rat RGCs (10), whereas 1.0 µL FG is preferable in the adult mouse (19). We compared RGC labeling efficiency in P10 mice by injecting three doses of FG, and found that 0.3 µL was the most effective. Compared with the 0.6 and 1.0 µL groups, the density of FG-positive RGCs in the 0.3 µL group was 3,563.9±311.9 cells/mm2, comparable to that in adult mice (3,230±157 cells/mm2) (19,20). Note that the number is slightly more than in adult mice, which is reasonable considering the elimination of incorrectly projected RGCs after P10 (3). The finding is interesting because high-dose FG is theoretically supposed to label more RGCs than low-dose FG; conversely, we found that the lowest dose (0.3 µL) could trace the highest number of RGCs. This may be attributed to low efflux from the pretectum when reducing the injected dye volume. Further studies regarding fluorescent molecular transportation in the visual pathway are needed to understand the exact mechanism of the different performance among the three doses.

Although injecting FG into the hippocampus, dorsal raphe nucleus, amygdala, and mediodorsal thalamic nucleus of rats has confirmed that it is non-neurotoxic (25-27), in comparison with adult mice, neonatal mice are more sensitive to chemicals (e.g., FG) and physical stress (e.g., trauma, intracranial pressure change). The mortality rate of the mice in this study is considered to be related to the FG dosage rather than the anesthesia for three reasons: (I). ketamine (20 mg/kg)/xylazine (3 mg/kg) anesthesia is safe in neonatal mice (28); (II) all the neonatal mice recovered well from anesthesia within 1 h post-surgery without abnormal behaviors, whereas deaths of mice occurred 24 h post-surgery; (III) the high-dose FG group suffered significant higher mortality than the low-dose groups. The increased mortality in the high-dose FG group may have resulted from increased intracranial pressure caused by high volume of FG injected into the brain. It was also noticed that one mouse died in the 0.3 µL group, so lower doses of FG (0.1 µL, 0.2 µL) were adopted to reduce modality, but they showed much lower fluorescence intensity and density (data not shown) on retinal flat-mounts, indicating poor labeling effectiveness. Accordingly, 0.3 µL FG could be an appropriate dose to balance efficiency and safety.

In conclusion, the appropriate site for retrograde RGC labeling in P10 mice is the region located 2–3.5 mm posterior to the bregma point toward 0.5–2.0 mm lateral of the midline, and 0.3 µL FG is an appropriate dose for a safe and effective technique of tracing RGC development in the neonatal mouse.

Funding: This research was funded by Shenzhen San Ming Project (SZSM201812091) and Medical Scientific Research Foundation of Guangdong Province of China (B2021216).

Reporting Checklist: The authors have completed the ARRIVE reporting checklist. Available at http://dx.doi.org/10.21037/atm-21-2022

Conflicts of Interest: All authors have completed the ICMJE uniform disclosure form (available at http://dx.doi.org/10.21037/atm-21-2022). The authors have no conflicts of interest to declare.

Ethical Statement: The authors are accountable for all aspects of the work in ensuring that questions related to the accuracy or integrity of any part of the work are appropriately investigated and resolved. All animal studies were conducted according to the Association for Research in Vision and Ophthalmology (ARVO) Statement for the care and use of animals and approved by the Animal Ethics Committee of Zhongshan Ophthalmic Center, Sun Yat-sen University.