The phosphatidylinositol-4,5-bisphosphate 3-kinase (PI3K)/protein kinase B (AKT) pathway is frequently mutated in human cancers, and several PI3K families exist in human cells (3). Class IA PI3Ks, which are known to regulate tumor progression, are heterodimers consisting of a p85 regulatory subunit and a p110 catalytic subunit. Growth factor receptor tyrosine kinases, such as (EGFR), HER2, MET, and FGFR, phosphorylate adaptor proteins to bind p85, which relieves the inhibition of p110 by p85. The p85-p110 heterodimer then binds to lipid phosphatidylinositol-4,5-bisphosphate (PIP2) at the plasma membrane. p110 phosphorylates PIP2 to generate phosphatidylinositol-3,4,5-triphosphate (PIP3). PTEN and INPP4B can dephosphorylate PIP3 to inhibit the PI3K/AKT pathway. AKT, SGK, and PDK1 bind to PIP3 at the plasma membrane, and then PDK1 and TORC2 phosphorylate AKT to fully activate AKT. Activated AKT can phosphorylate many proteins involved in cell survival, proliferation, growth, and protein synthesis, such as FOXO family proteins, MDM2, and p27 (4,5).

5-hydroxytryptamine (serotonin) receptor 7 (HTR7) is a G protein-coupled receptor (GPCR) first described in 1993, and many transcription factors can bind to its promoter, such as AP2, EGR-1, and MAZ (6,7). HTR7 is associated with circadian rhythm, anxiety, depression, schizophrenia, nociception, and memory (8-10). However, the role of HTR7 in tumor progression has not been studied. In the present study, we aimed to investigate the role of HTR7 in laryngeal cancer. The findings indicated that HTR7 promotes laryngeal cancer growth by activating the AKT pathway. We present the following article in accordance with the ARRIVE reporting checklist (available at http://dx.doi.org/10.21037/atm-21-1069).

Human oral keratinocytes cell and laryngeal cancer cell TU212, FaDu, Hep-2, TU212, and TU686 were purchased from the American Type Culture Collection (ATCC) and cultured in RPMI 1640 medium (Invitrogen, Carlsbad, CA, USA) supplemented with 10% fetal bovine serum (FBS, Biological Industries, Kibbutz Beit-Haemek, Israel) at 37 °C in a humidified incubator with 5% CO2. All laryngeal cancer tissues and adjacent normal laryngeal tissues were obtained from LSCC patients who underwent surgery at the Otolaryngology Head and Neck Department of Guangdong Provincial People’s Hospital (Guangzhou, Guangdong, China). Eight pairs of fresh laryngeal cancer tissues and adjacent normal laryngeal tissues were obtained during the procedures and immediately frozen in liquid nitrogen. A total of 113 laryngeal cancer tissues were obtained; the detailed clinicopathological characteristics are shown in Table S1. The study was conducted in accordance with the Declaration of Helsinki (as revised in 2013). The Ethics Committee of Guangdong Provincial People’s Hospital and Guangdong Academy of Medical Sciences approved all collections. All patients provided written informed consent.

Indicated cells were seeded in a 96-well plate at a density of 4×103 cells/well, six replications were prepared for the treatment group. Cells were incubated with MTT solution at the indicated time points for 4 h at 37 °C; DMSO was added to each well. The plates were gently shaken on a horizontal shaker for 10 min to dissolve crystals; the optical density value of each well was read at 570 nm in a microplate reader (BioTek). Each experiment was repeated 3 times.

Cells were seeded in 6-well plates at a density of 0.5×103 cells/well and cultured for 10 days. Colonies were fixed with 10% formaldehyde for 5 min and then stained with 1% crystal violet for 30 s. BrdU incorporation assay was performed using the BrdU Kit (eBioscience, San Diego, CA, USA).

Cells were resuspended in 2 mL complete medium plus 0.3% agar. The agar–cell mixture was plated on the top of a bottom layer consisting of 1% agar in complete medium. Ten days later, colony size was measured using an ocular micrometer, and colonies >0.1 mm in diameter were counted. The experiment was performed 3 times for each cell line.

All animal experiments were performed in accordance with the guidelines for animal care and under the protocols approved by the Institutional Animal Care and Use Committee of the Guangdong Provincial People’s Hospital and Guangdong Academy of Medical Sciences. Nude mice (4 weeks old) were purchased from the Model Animal Research Center of Nanjing University and randomly assigned into the following 4 groups, with 3 mice in each group: the vector control group, the HTR7 overexpression group, the scramble group, and the HTR7 knockdown group. The dorsal flank of each nude mouse was injected subcutaneously with 1×107 cells. The length (L) and width (W) of the tumors were measured with a Vernier caliper. The volume of the tumor was calculated as Volume (V) = W2 × L × 0.52. Tumor size were measured weekly.

HTR7 is upregulated in laryngeal carcinoma tissues and cells 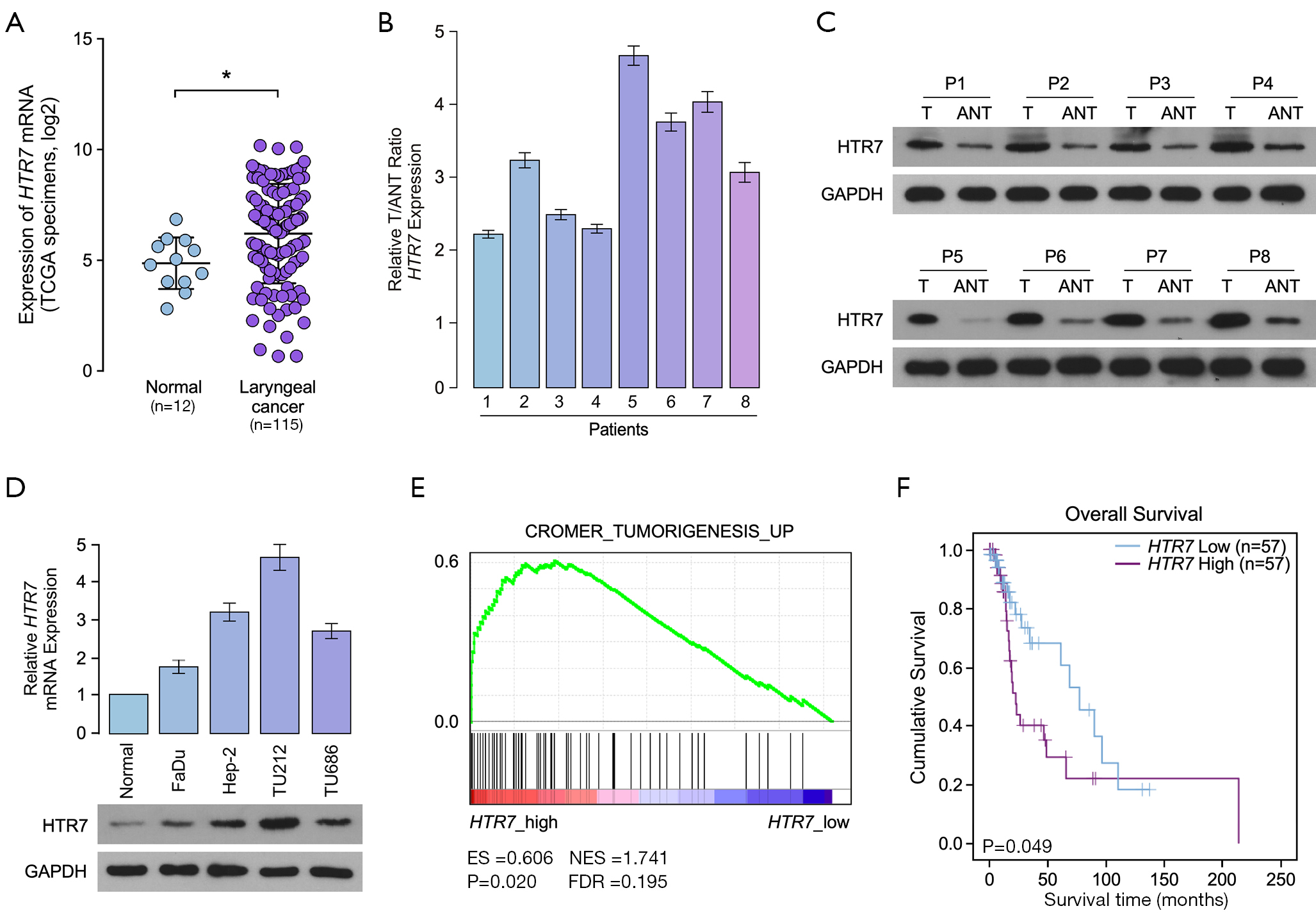 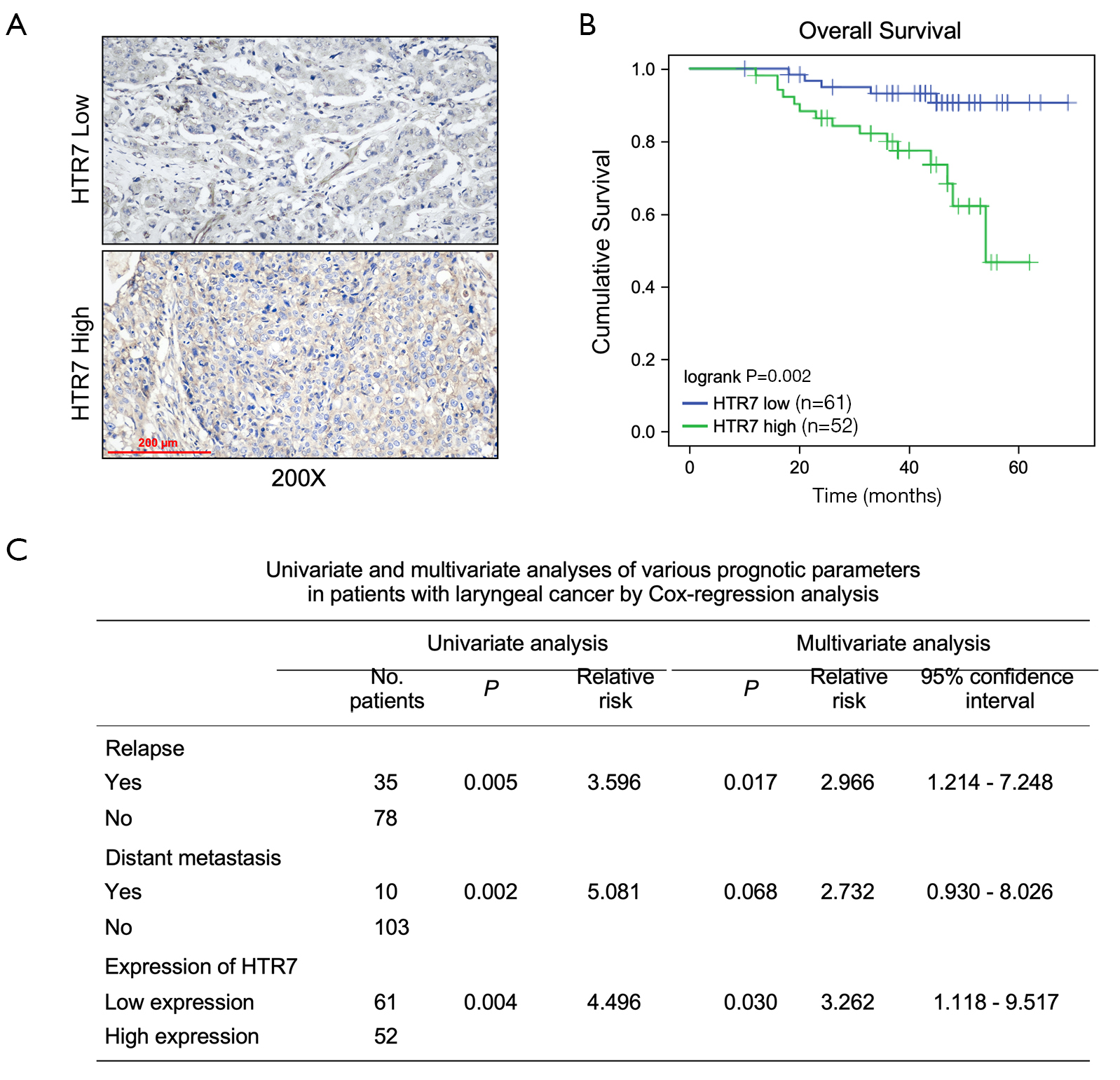 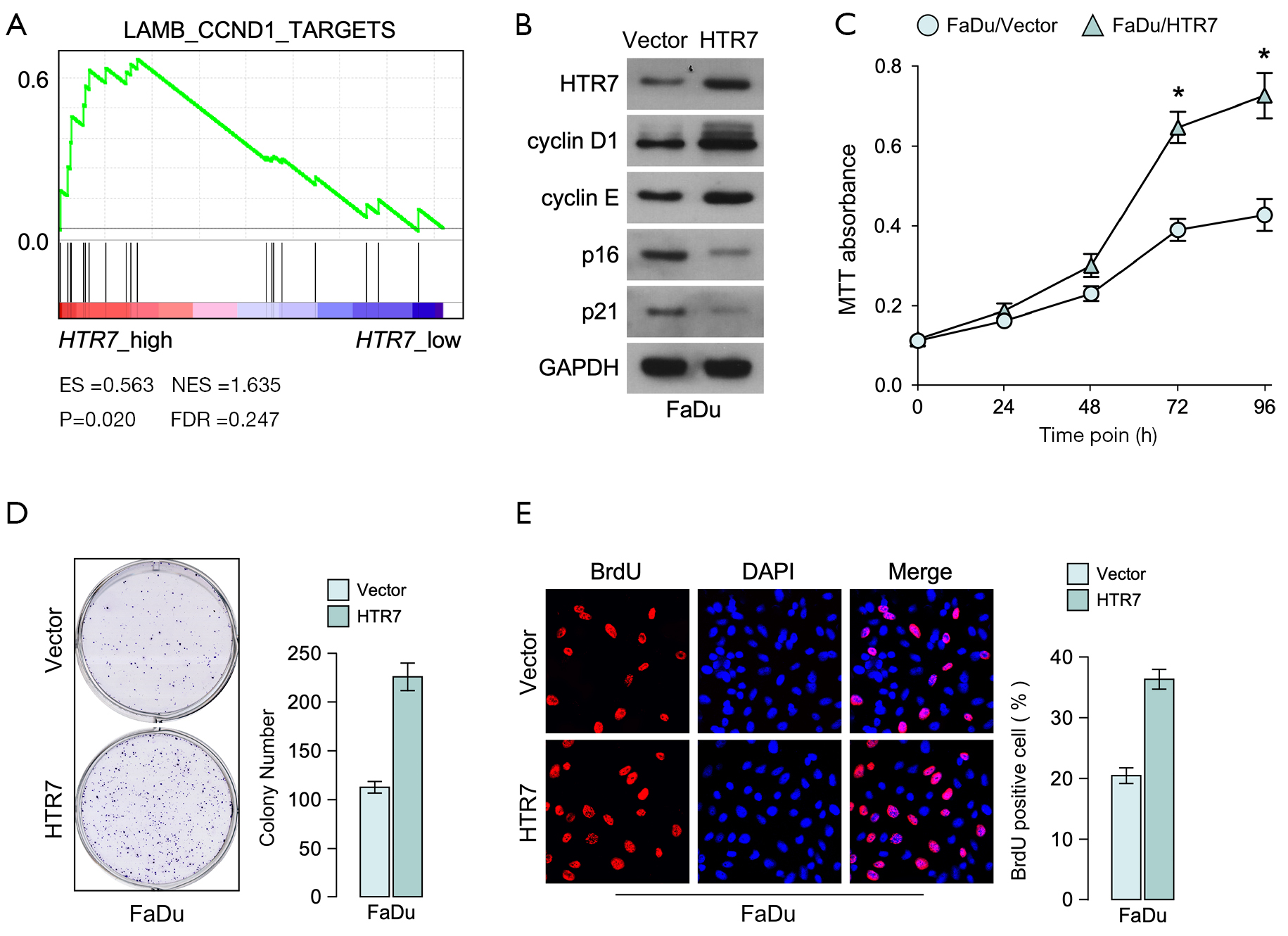 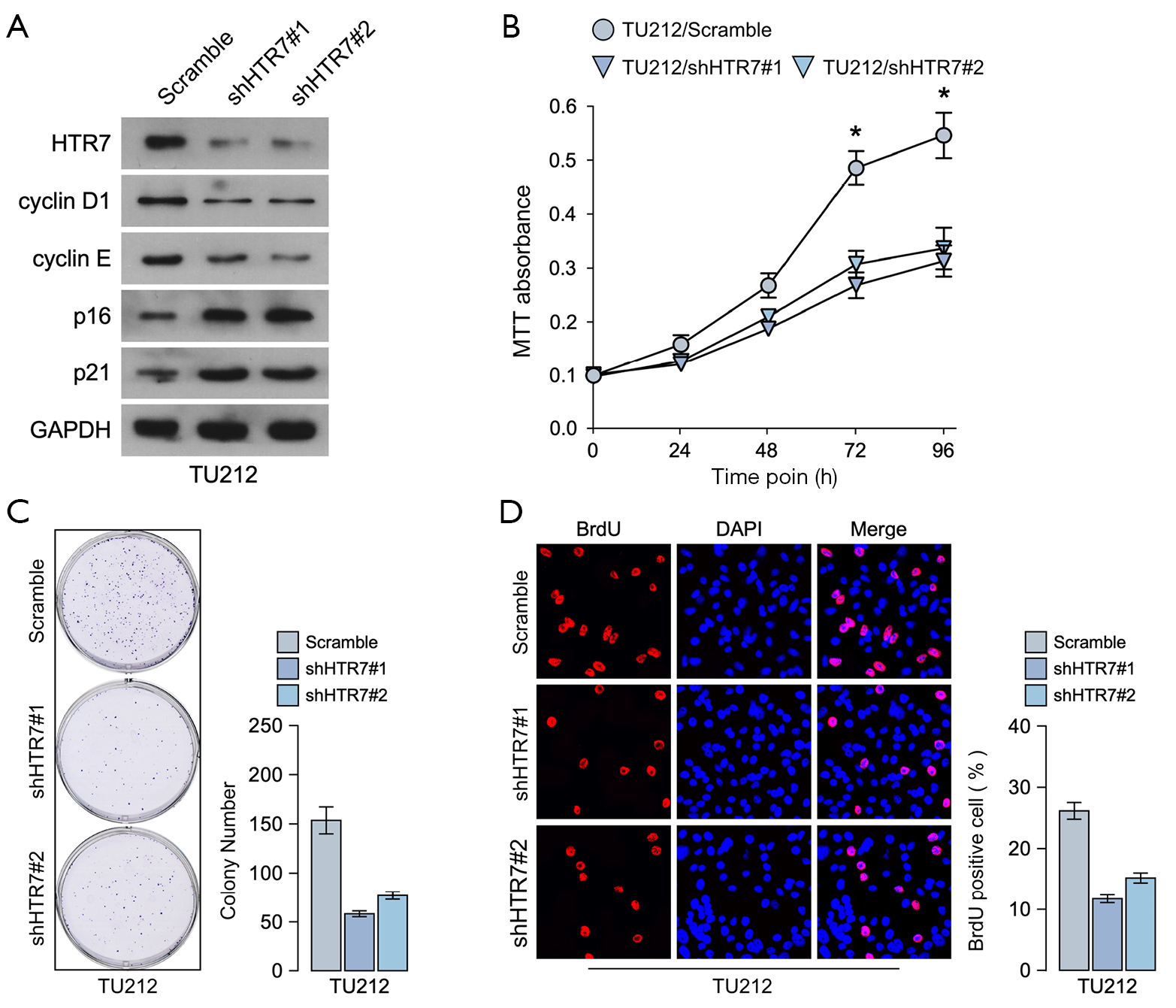 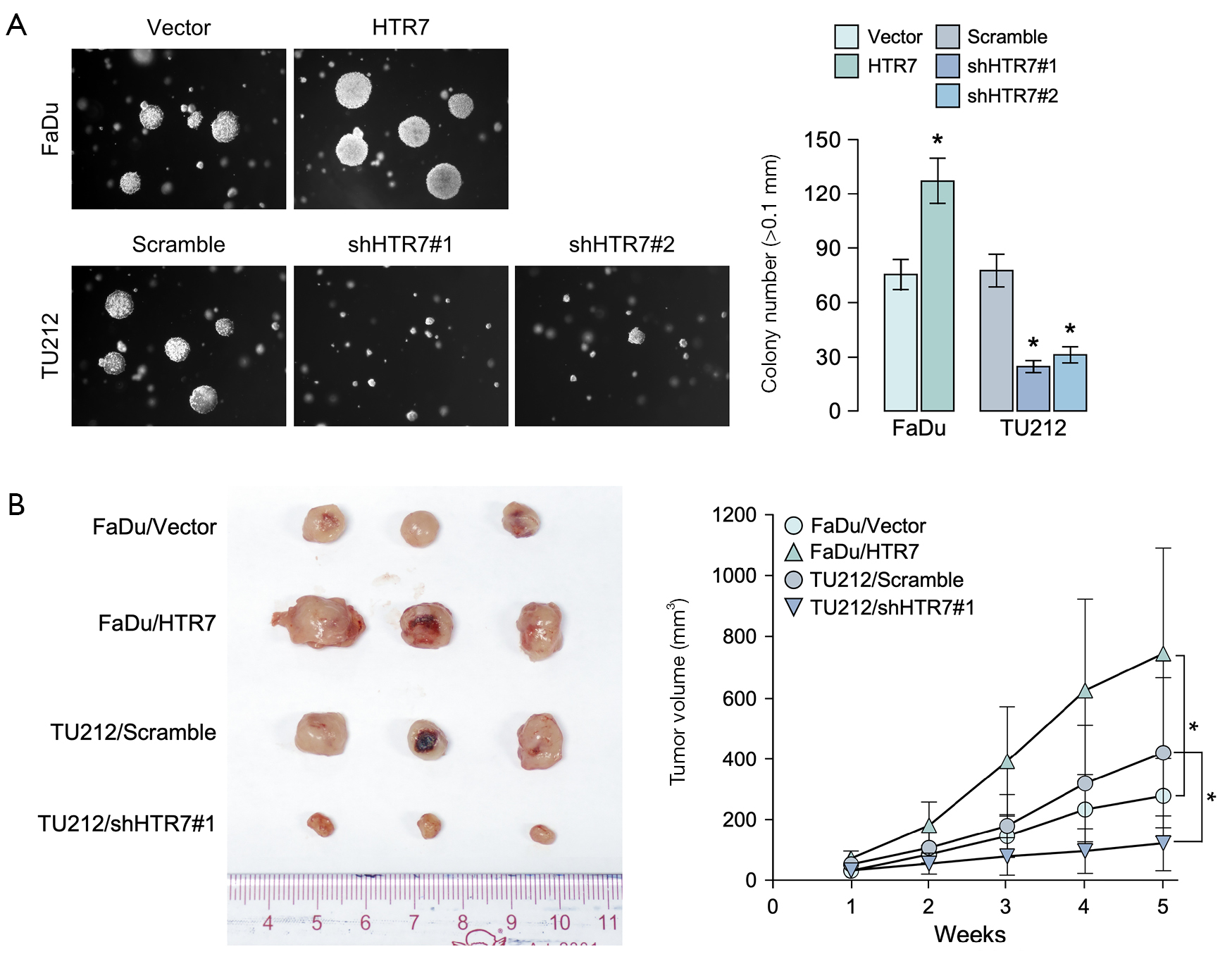 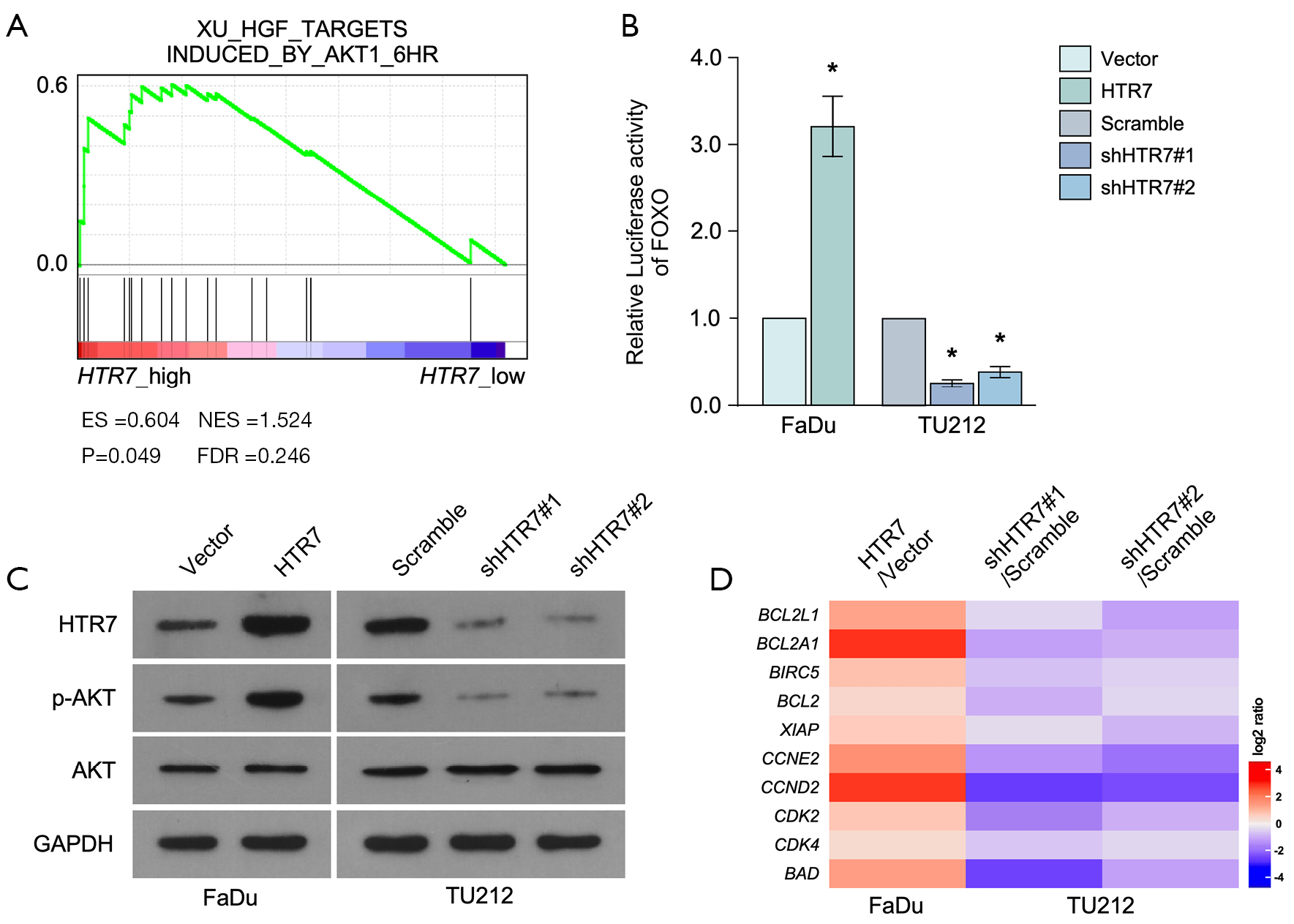 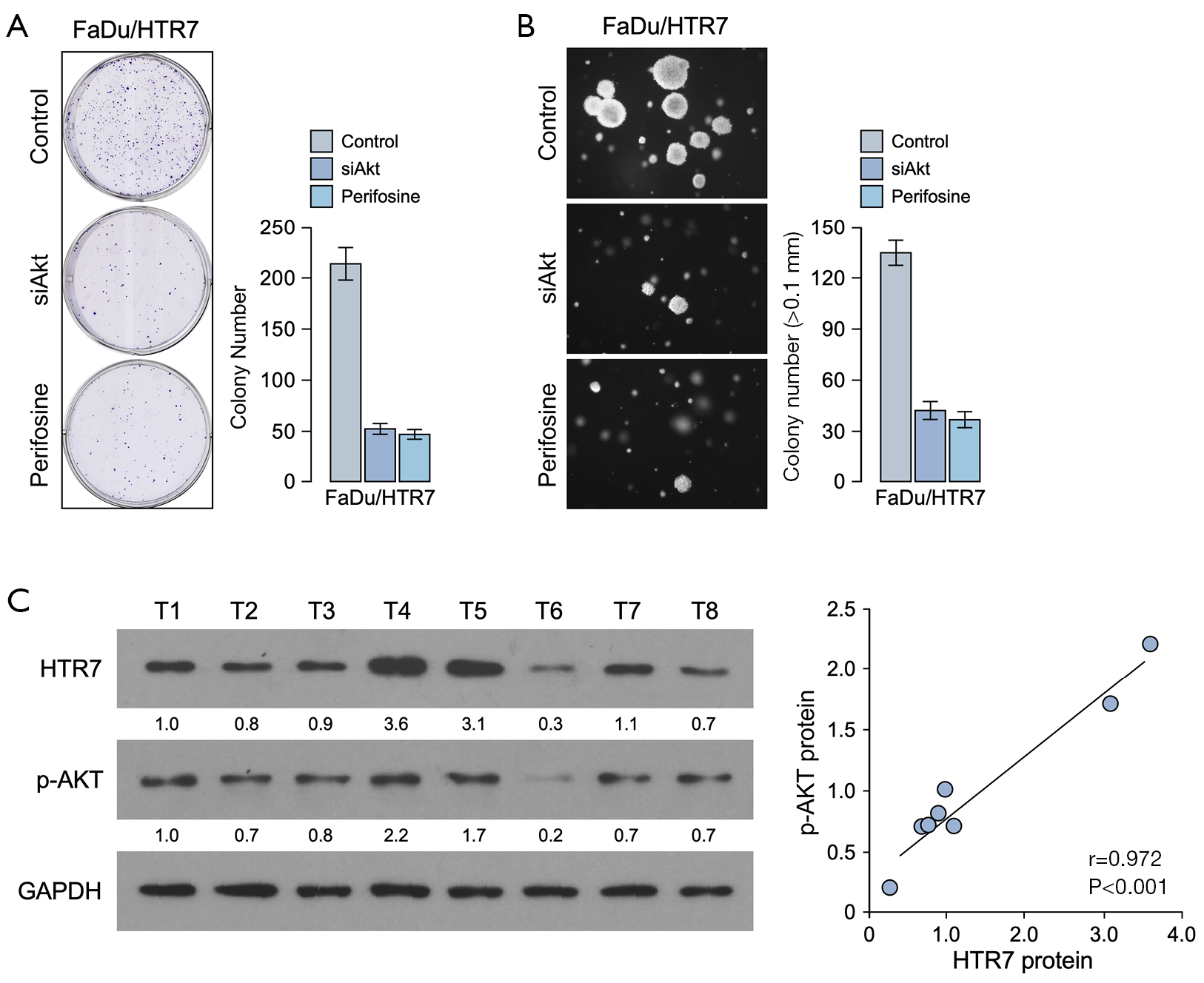 To the best of our knowledge, the role of HTR7 in tumor progression has not been studied until now. HTR7 belongs to the GPCR family, which is one of the most studied pharmacological targets because of its diverse biological functions and druggable sites. GPCRs represent about 34% of drugs approved by the US Food and Drug Administration, and about 27% in terms of sales (22-24), suggesting that HTR7 might be easily druggable to treat laryngeal cancer. In summary, HTR7 promotes laryngeal cancer growth by activating the PI3K/AKT pathway, providing a new target for laryngeal cancer prognosis and therapy.

Funding: This work was financially supported by the Natural Science Foundation of Guangdong Province, China (Grant No. 2019A1515011678).

Reporting Checklist: The authors have completed the ARRIVE reporting checklist. Available at http://dx.doi.org/10.21037/atm-21-1069

Conflicts of Interest: All authors have completed the ICMJE uniform disclosure form (available at http://dx.doi.org/10.21037/atm-21-1069). The authors have no conflicts of interest to declare.