Breast cancer (BC) is the most common malignancy, and the fifth leading cause of death among women in China (1). The primary cause of BC-associated death is metastasis. Hormone receptor-positive HER2-negative (HR+/HER2−) BC accounts for approximately 65% of all metastatic breast cancer (MBC) (2). MBC is incurable, and the purpose of its treatment is mainly to prolong patient survival while maintaining or improving the quality of life (3,4). Receiving appropriate anti-tumor treatment is essential to achieve these goals.

According to international (5-7) and domestic guidelines (8), endocrine therapy (ET) is the preferred therapeutic option for HR+/HER2– MBC, even in the presence of visceral disease, unless there is a visceral crisis or concern/proof of endocrine resistance. However, chemotherapy (CT) is commonly used in clinical practice. In the past decade, randomized controlled trials (RCTs) (9-14) have led to introducing several innovative therapeutic strategies into clinical practice, consisting of single-agent ET and new targeted drugs combined with ET. Real-world knowledge of treatment patterns in patients with HR+/HER2– MBC is urgently needed in improving clinical practice.

Retrospective reports from European countries (15-19) and the United States (20) showed differences in initial treatment options for HR+/HER2– MBC among countries. There is a lack of overview on first-line treatment in Chinese population. Therefore, we carried out a real-world study in a large, multicenter cohort of patients with HR+/HER2– MBC from the database of Chinese Society of Clinical Oncology Breast Cancer (CSCO BC).

The study’s main purpose is to describe the first-line treatment choices being made in clinical practice and evaluate their consistency with the guideline of Chinese Society of Clinical Oncology Breast Cancer (CSCO BC guideline). We present the following article in accordance with the STROBE reporting checklist (available at http://dx.doi.org/10.21037/atm-20-8252).

This study was conducted using a retrospective cohort design. Patients with HR+/HER2– MBC between 1996 and September 2018 were identified from the database of CSCO BC, which is derived from nine hospitals' inpatient and outpatient medical records across seven cities in China. The last follow-up date was September 30, 2019.

Patients with HR-positive HER2-negative metastasis disease were eligible for inclusion. The inclusion criteria were either primary or metastatic tumor that expressed estrogen or progesterone receptors in at least 10% of cells before first-line treatment, as assessed with the use of immunohistochemistry testing. Patients had received first-line systemic treatment, efficacy evaluation, or safety evaluation at least once. The exclusion criteria were as follows: HER2-positive MBC before first-line systemic treatment, missing information of first-line treatment, regional recurrence only, that had been removed by surgery or radiotherapy. The study was conducted in accordance with the Declaration of Helsinki (as revised in 2013). The study was approved by the Ethics board of The Affiliated Hospital of Qingdao University (No. 221311920). Because of the retrospective nature of the research, the requirement for informed consent was waived.

We collected data on patient demography, clinical and pathological status, first-line treatment, efficacy and safety evaluation, and subsequent administration after drug withdrawal of initial first-line treatment from medical records. ET was defined as single-agent ET or ET plus targeted drugs. Similarly, CT was defined as single-agent CT or combination of CT (or combination of CT and targeted drugs). The patients were followed up by routine medical visit, or telephone calls with patients or their families.

According to the CSCO BC guideline, patients who had neither visceral disease nor progression on previous (neo)adjuvant ET should receive ET as initial systemic therapy. If these patients received CT instead of ET, it is considered inconsistency with guideline.

Disease characteristics, the proportion of CT and ET within four time periods, first-line treatment regimens, reasons for drug withdrawal, and the subsequent administration after drug withdrawal of initial first-line treatment were summarized through descriptive analysis. Factors influencing CT vs. ET prescription were investigated through univariate and multivariate logistic regression with odds ratio (OR) calculation.

All data were analyzed by SAS 9.4, and P<0.05 was statistically significant.

Baseline characteristics and factors influencing the prescription of CT or ET

A total of 2,325 HR+/HER2– MBC patients were identified, of which 448 were excluded due to hormone receptor-positive expression less than 10%, missing information of the first-line treatment, follow-up less than once, or regional recurrence which had been removed by surgery or radiotherapy. Finally, 1,877 cases were analyzed (Figure 1). 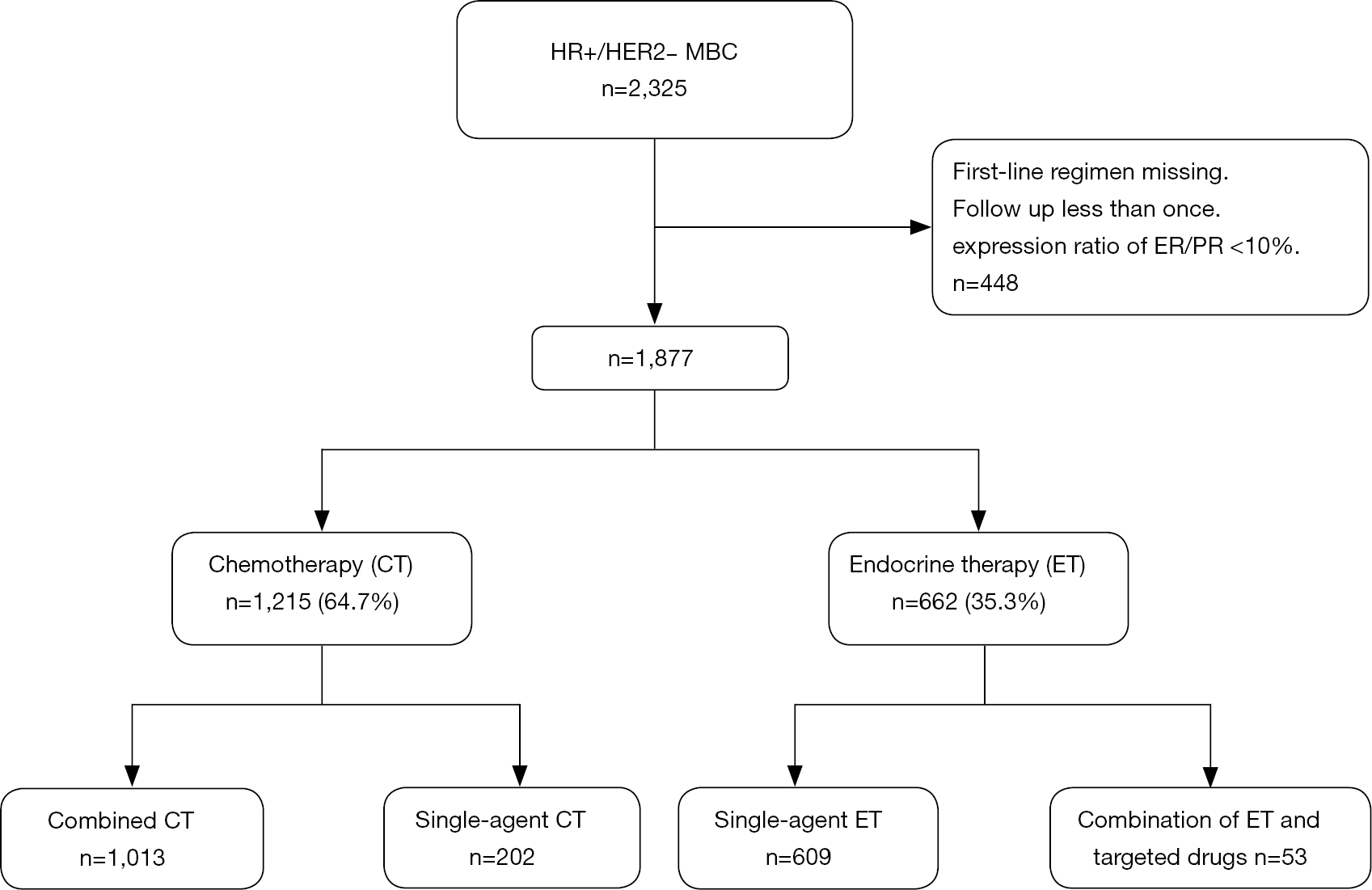 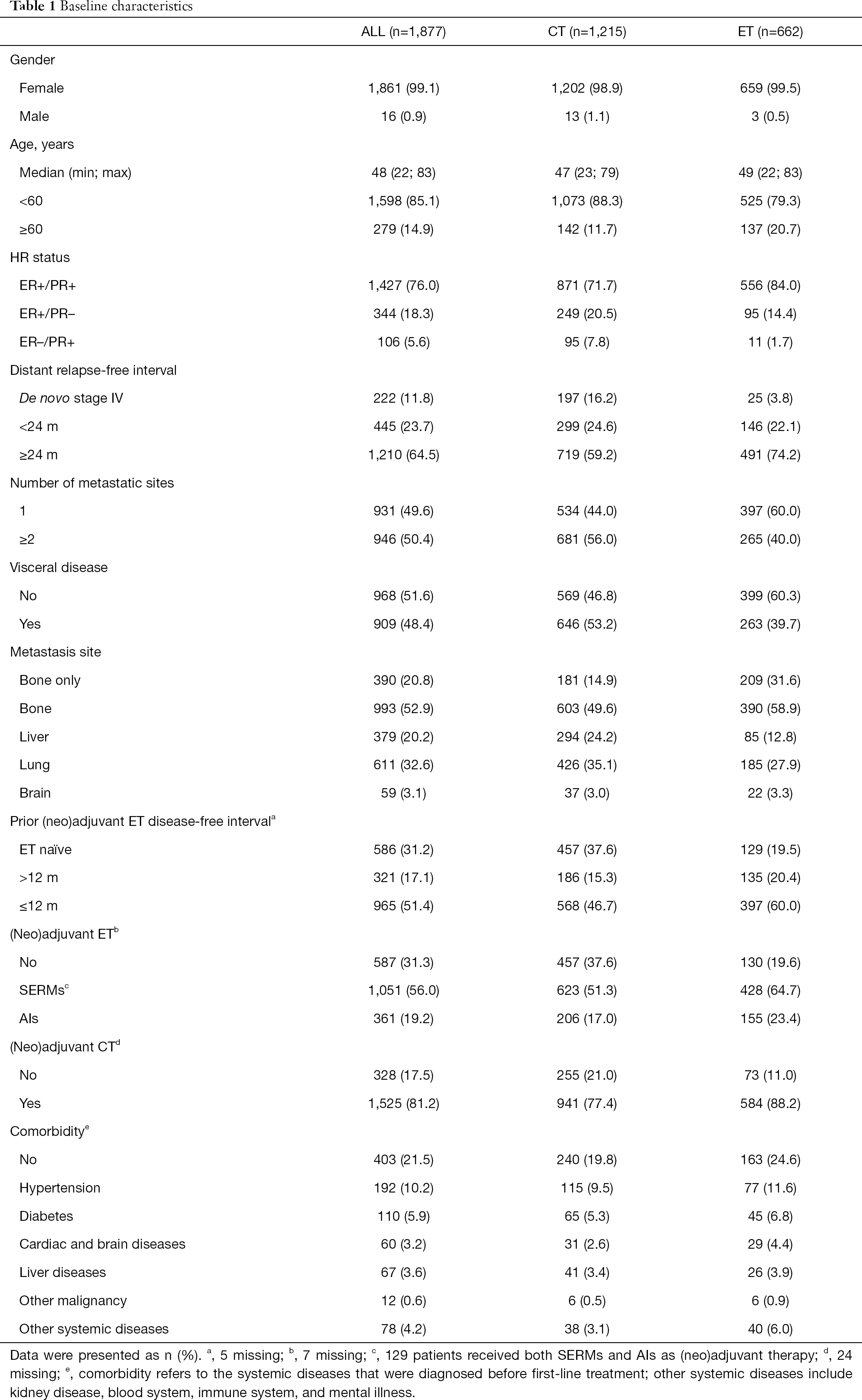 Univariate and multivariate analysis of factors influencing the prescription of CT vs. ET is shown in Table 2. In patients with age ≥60 y, DRFI ≥24 months, ER+/PR+, bone metastasis only, or progression on (neo)adjuvant ET, ET was preferred as the first-line treatment. Factors associated with preferring CT were de novo stage IV, liver or lung metastasis. 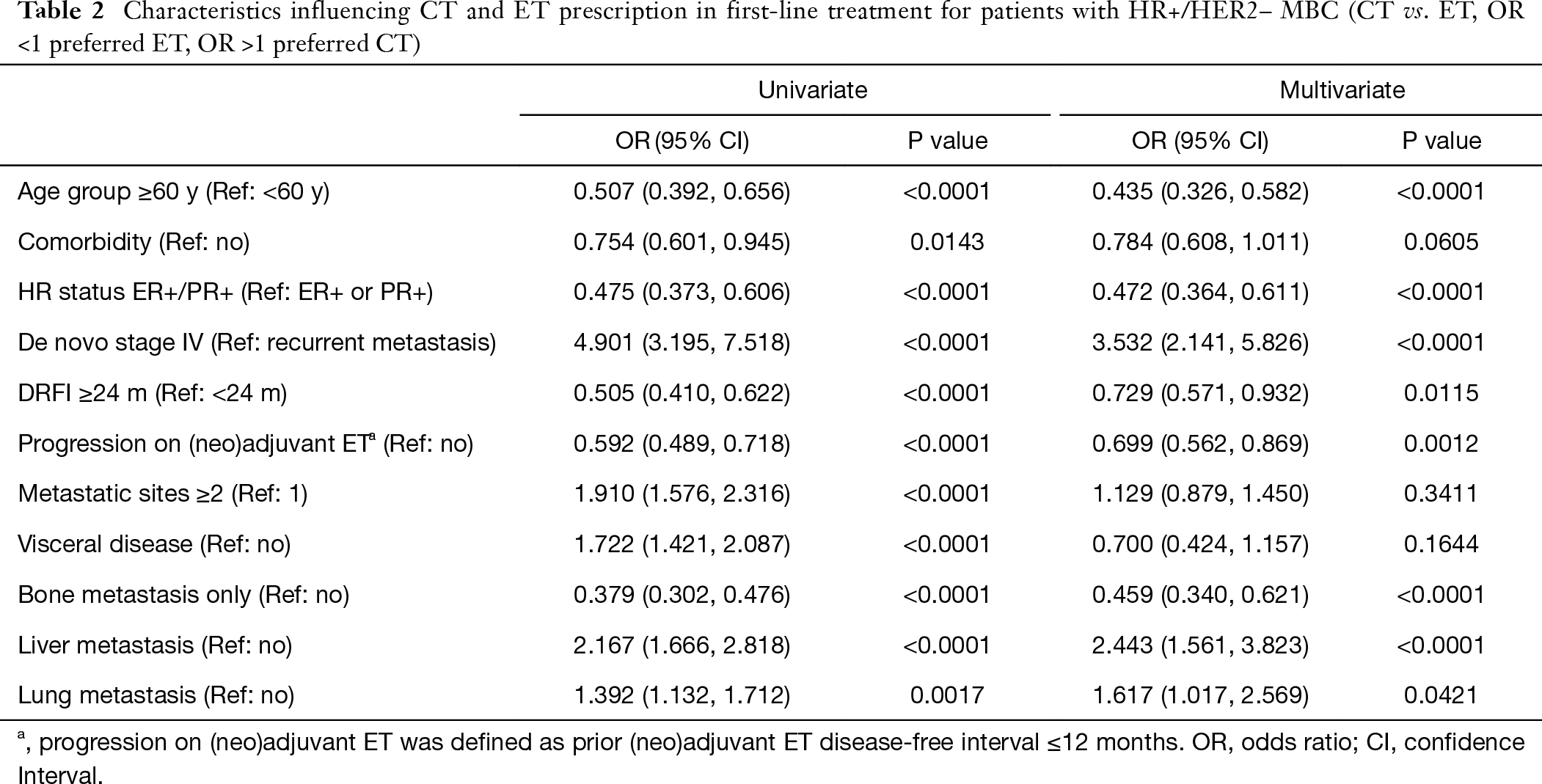 The proportion of initial CT and ET in HR+/HER2– MBC patients with different clinical characteristics is shown in Table 3 and Figure S1. Among patients who had neither visceral disease nor progression on previous (neo)adjuvant ET, 322 patients (17.2% of total patients) received CT as initial systemic treatment. Meanwhile, 146 patients (7.8% of total patients) who had both visceral disease and progression on previous (neo)adjuvant ET received ET as initial treatment, most of which were single-agent ET. 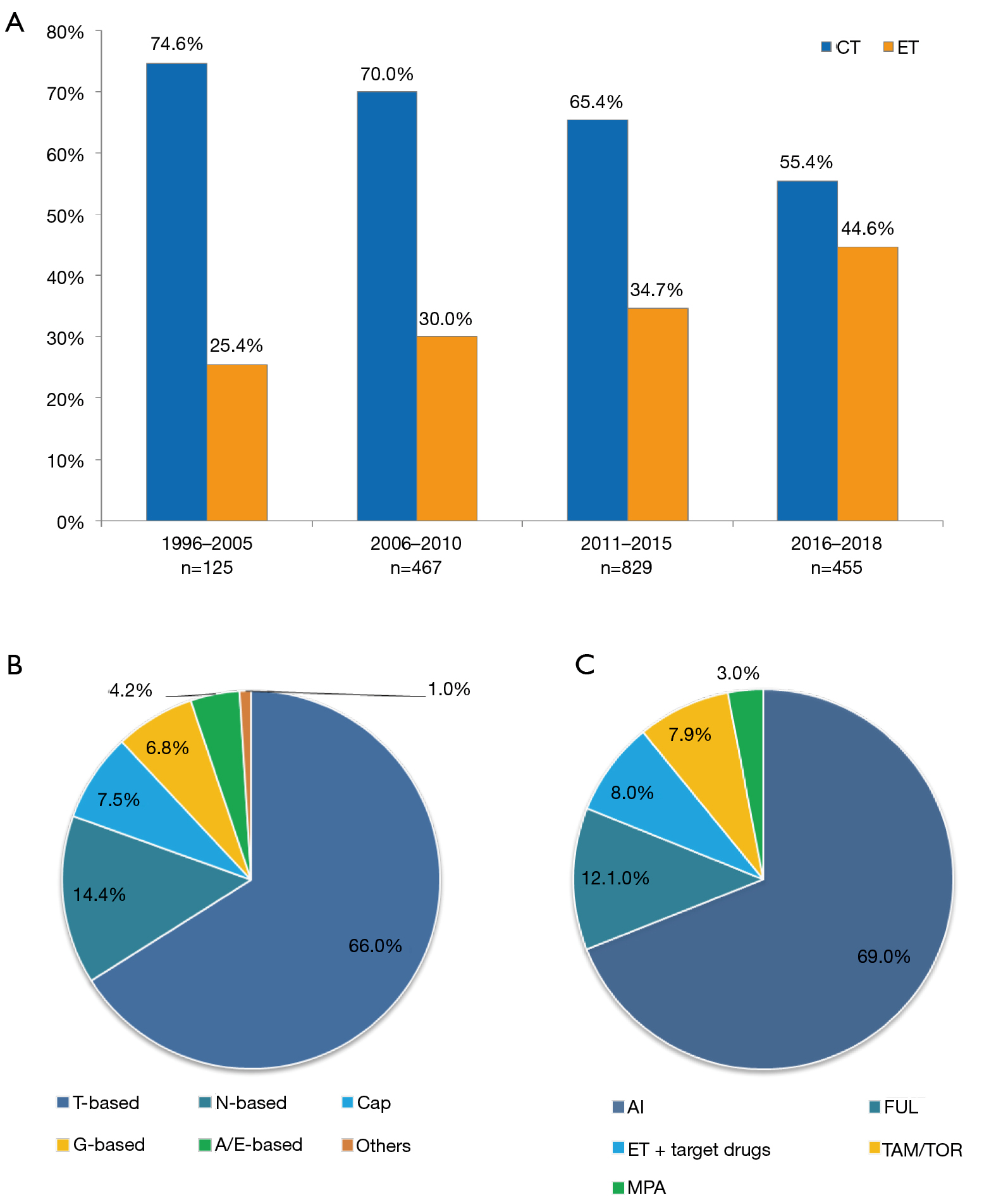 Outcomes of initial CT and ET 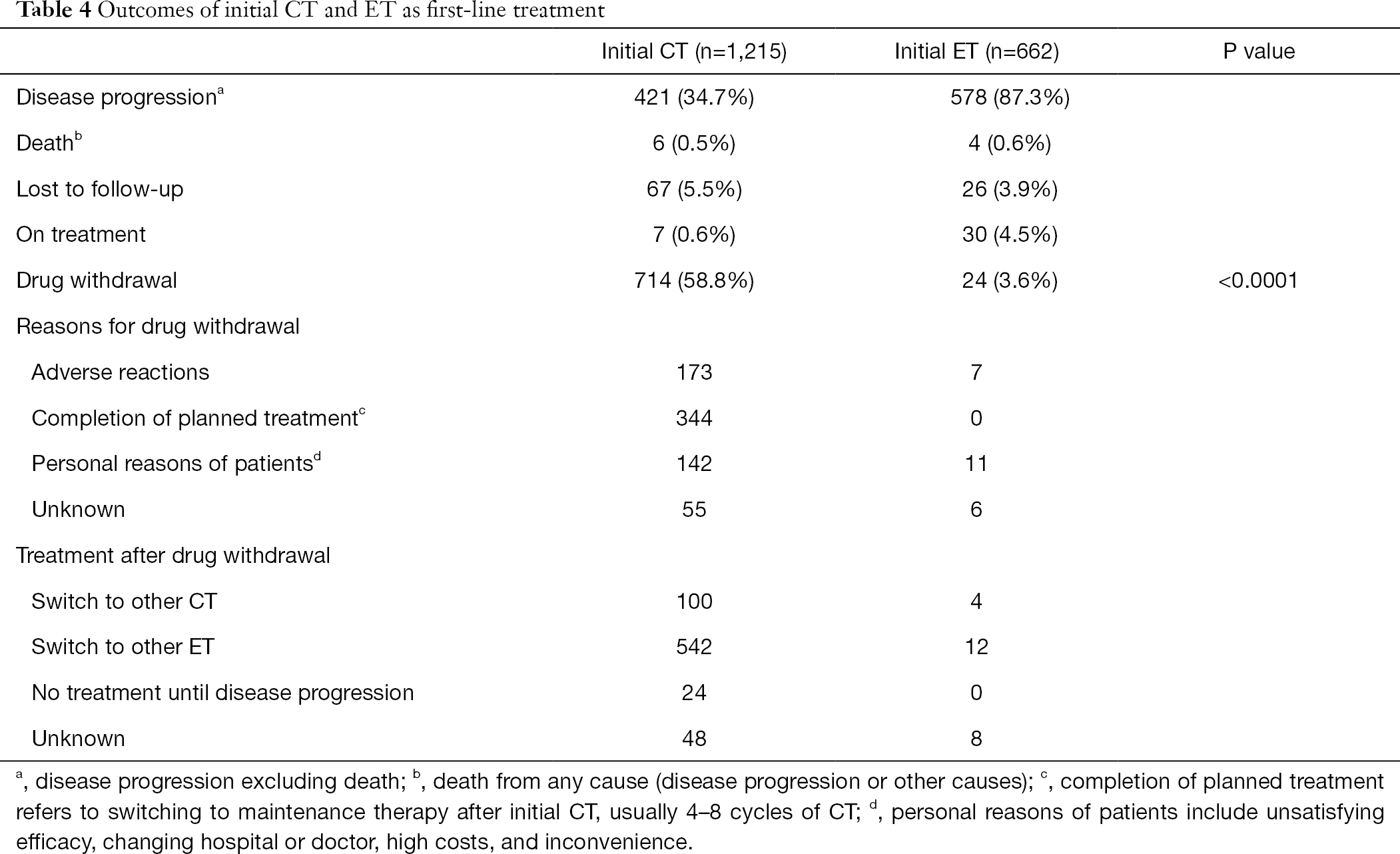 This multicenter real-world study focused on initial systemic therapy, providing a comprehensive and updated picture of the first-line treatment in Chinese patients with HR-positive HER2-negative MBC. Our results demonstrated that the proportion of ET recommended as the preferred treatment by international and domestic guidelines increased from 25.4% to 44.6% in the past two decades. Moreover, we found that 322 patients (17.2% of the total patients) who had neither visceral metastasis nor progression on (neo)adjuvant ET wrongly received CT instead of ET, which is against the CSCO BC guideline.

Our study described the basic characteristics of patients with HR+/HER2– MBC and actual first-line treatment received. The age at first diagnosis of MBC in our study was about 10 years younger, and the tumor burden was heavier than that reported from European and American countries (15-20). We found that the proportion of patients who were chosen for CT as initial treatment was higher than that of ET. However, it is gratifying that the application of ET has increased gradually. Insufficient evidence supporting ET use, the unavailability of endocrine drugs 10 years ago, and the old concept held by some clinicians that CT is more effective than ET may have contributed to the high proportion of CT use. Another cause could be the time taken to promote the recommended guidelines amongst the community widely. In addition, younger age and heavier tumor burden may further explain the high proportion of CT observed in our study.

Several factors may have contributed to the increased proportion of ET applications over the observed period. CT was reported with similar effect on survival as ET, accompanied by more adverse events (21,22). Outdated concepts are slowly changing due to powerful evidence from RCTs supporting ET use and the strong recommendations of guidelines. More importantly, ET agents have been broadly available. Fulvestrant was first approved for use in China in 2011, followed by the application of targeted drugs, such as everolimus (10), CDK4/6 inhibitors (11-13), and tucidinostat (14). Besides, the fact that clinicians strive to improve the quality of life of MBC patients, which is hard to achieve with CT, may also account for increased ET use since 2010 observed in our study.

As recommended by international (5-7) and CSCO BC guidelines, progression on prior ET and visceral disease, especially visceral crisis, are key factors when making therapeutic decisions for patients with HR+/HER2– MBC. Our study revealed 322 patients (17.2% of total patients) in the CT group exhibiting neither visceral metastasis nor progression on (neo)adjuvant ET and instead should have received ET, according to the guidelines. For patients with bone metastasis only and without proof of ET resistance, RCTs showed that the progression free survival (PFS) of single-agent ET was 16.8–22.3 months (23,24). This means the use of CT would make patients suffer unnecessary toxicity and inconvenience from excessive treatment. Furthermore, we found that 146 patients (7.8% of total patients) with both visceral metastasis and progression on (neo)adjuvant ET received ET as first-line treatment, most of which were single-agent ET. According to RCT results, the median PFS of single-agent ET in patients with progression on prior ET was less than 6 months (10,14,25). For these patients, ET combined with targeted drugs is recommended as the preferred option (5,8,10,14,25-27), CT may also be considered. The speed of disease progression is another important factor when making therapeutic decisions (6), but it has not been clearly defined in both international and domestic guidelines, which may lead to confusion in recommending treatment options.

Our study revealed unreasonable first-line treatment of HR+/HER2– MBC, including over-treatment and under-treatment, highlighting the need for greater promotion of adherence to current guidelines. Based on these data, the clinical application for ET should be appropriately expanded in first-line treatment. For patients without visceral disease and proof of endocrine resistance, ET (including ET combined with targeted drugs) is the preferred regimen. For patients with progression on prior ET, combination of ET and targeted drugs is recommended as the preferred option, even in the presence of visceral disease. CT is appropriate for those diseases requiring rapid remission, such as visceral crisis or rapidly progressive diseases, based on full assessment of potential benefits and toxicity.

Treatment recommendations for systemic therapy in MBC should be made on an individual basis, taking into account the age, physical conditions, clinical and pathological features of patients. In addition, adverse reactions, costs, and convenience of treatment also need to be considered. Our study showed that MBC patients with age ≥60 y, ER+/PR+, DRFI ≥24 months and bone metastasis only, were preferably chosen for ET as first-line treatment, which is mainly due to RCTs showing that patients with these characteristics are more likely to benefit from ET (23,28-30). Surprisingly, patients with progression on (neo)adjuvant ET tended to choose ET as the first-line treatment in our study. In fact, most of those patients showed secondary resistance to previous ET, and only a small number showed primary resistance. Patients with de novo stage IV, liver or lung metastasis tended to receive CT because these factors predict poor prognosis and require rapid response.

In our study, 58.8% of patients (n=714) in CT group discontinued the initial CT regimen due to non-disease progression reasons, including adverse events, completion of planned treatment, and personal reasons of patients (probably cost and inconvenience). Most of these patients switched to endocrine drugs as maintenance therapy. These results showed that CT was associated with more adverse events, lower quality of life, leading to a higher rate of drug withdrawal, while ET was associated with less toxicity and better adherence, which is more likely to be chosen as maintenance therapy.

Inherent to the retrospective nature of observational cohort studies, our study has several limitations. No quality of life and details of adverse events were available. Although guidelines strongly recommend ET combined with targeted therapy as first-line treatment, there were only a small number of cases in our study, possibly because of the high cost, which is likely to affect the application of ET.

Reporting Checklist: The authors have completed the STROBE reporting checklist. Available at http://dx.doi.org/10.21037/atm-20-8252

Conflicts of Interest: All authors have completed the ICMJE uniform disclosure form (available at http://dx.doi.org/10.21037/atm-20-8252). The authors have no conflicts of interest to declare.

Ethical Statement: The authors are accountable for all aspects of the work in ensuring that questions related to the accuracy or integrity of any part of the work are appropriately investigated and resolved. The study was conducted in accordance with the Declaration of Helsinki (as revised in 2013). The study was approved by the Ethics board of The Affiliated Hospital of Qingdao University (No. 221311920). Because of the retrospective nature of the research, the requirement for informed consent was waived.