Hyperplasia is a benign mammary condition that is usually clinically occult. Clinical manifestations of mammary gland hyperplasia are nonspecific, including pain and local lump. Generally, hyperplasia is most likely to occur in women aged >35 years, and it can be found in women of all age groups (1). Although benign hyperplasia is not a malignancy, it shares a variety of activated signaling with breast cancer. Additionally, similar to most cancers, benign mammary epithelium grows continuously; there have been no effective agents discovered that can control cell proliferation, and surgical treatment is usually indicated. The imbalance of hormone levels and the abnormal expression of hormone receptors in breast tissues are the main causes of breast hyperplasia, causing abnormal cell signaling activation and inducing cell proliferation (1).

Artesunate (ART) is an important artemisinin derivative, and its metabolite dihydroartemisinin is most commonly used in the treatment of malaria (2). In recent years, relevant studies have found that ART has a certain effect on tumor treatment (3). Its mechanism mainly involves tumor cell apoptosis, anti-immunosuppression, iron-mediated free radical formation, cell cycle blocking, anti-angiogenesis (4), reversing drug resistance, and restoring chemosensitivity (5,6). At present, a large number of studies on the antitumor activity of ART are underway. Li et al. found that ART can target nasopharyngeal carcinoma by inhibiting the AKT/mTOR pathway (7). Xiao et al. also found that ART can treat oral tongue squamous cell carcinoma by inhibiting AKT (8). Besides, ART has been demonstrated to regulate nuclear factor-κB NF-κB (9), and it has also been shown to have potential in the treatment of breast cancer (10). However, ART has not yet been studied for the treatment of breast hyperplasia.

Although mammary gland hyperplasia is not an inflammatory disease, the continuously growing mass usually causes swelling pain, and tingling at the original site. Some patients may even suffer from itch and fever in the breast. Cyclooxygenase-2 (COX-2) is suggested to generate prostaglandins, which may cause fever, pain, and inflammation (11). Studies by Visscher et al. have confirmed that COX-2 is associated with the proliferation of breast cells (12) and the risk of breast cancer (13). Additionally, NF-κB affects proinflammatory signaling pathways by regulating COX-2 genes (14). Brantley et al. confirmed that NF-κB plays an important role in regulating the proliferation, branching, and maintenance of the normal epithelial structure of mammary epithelium (15). However, whether NF-κB has potential value in the treatment of breast hyperplasia still requires further study.

Protein kinase B or Rac, now known as AKT, is implicated in NF-κB and regulating biological processes in tumors (16,17), and is a kind of serine/threonine-protein kinase (18,19). It is recruited to the plasma membrane as the inactive cytosolic protein. Also, AKT can be activated via serine 473 and threonine 308 phosphorylation responding to cytokines or growth factors through the phosphatidylinositol 3,4,5-triphosphate (PIP3) and phosphatidylinositol-3-kinase (PI3K) pathway (20). The phosphorylated AKT blocks some pro-apoptotic proteins, such as Bcl-2 associated agonist of cell death (Bad) and Bcl-2 associated X protein (Bax) (21). Moreover, suppression of AKT-induced apoptosis may inhibit mammary hyperplasia (22).

This study aimed to investigate the effects of ART on breast epithelial cell proliferation in vitro and in vivo.

We present the following article in accordance with the ARRIVE reporting checklist (available at http://dx.doi.org/10.21037/atm-21-1447).

Semiquantitative analyses on various proteins were performed by ImageJ (National Institutes of Health, Bethesda, MD, USA). The band intensity (density) was determined based on the band pixel value and area. The quantitative results were presented in the manner of the ratio of the target protein to the loading control (the housekeeping protein).

ART blocks the proliferation and inflammation of mammary epithelial cells 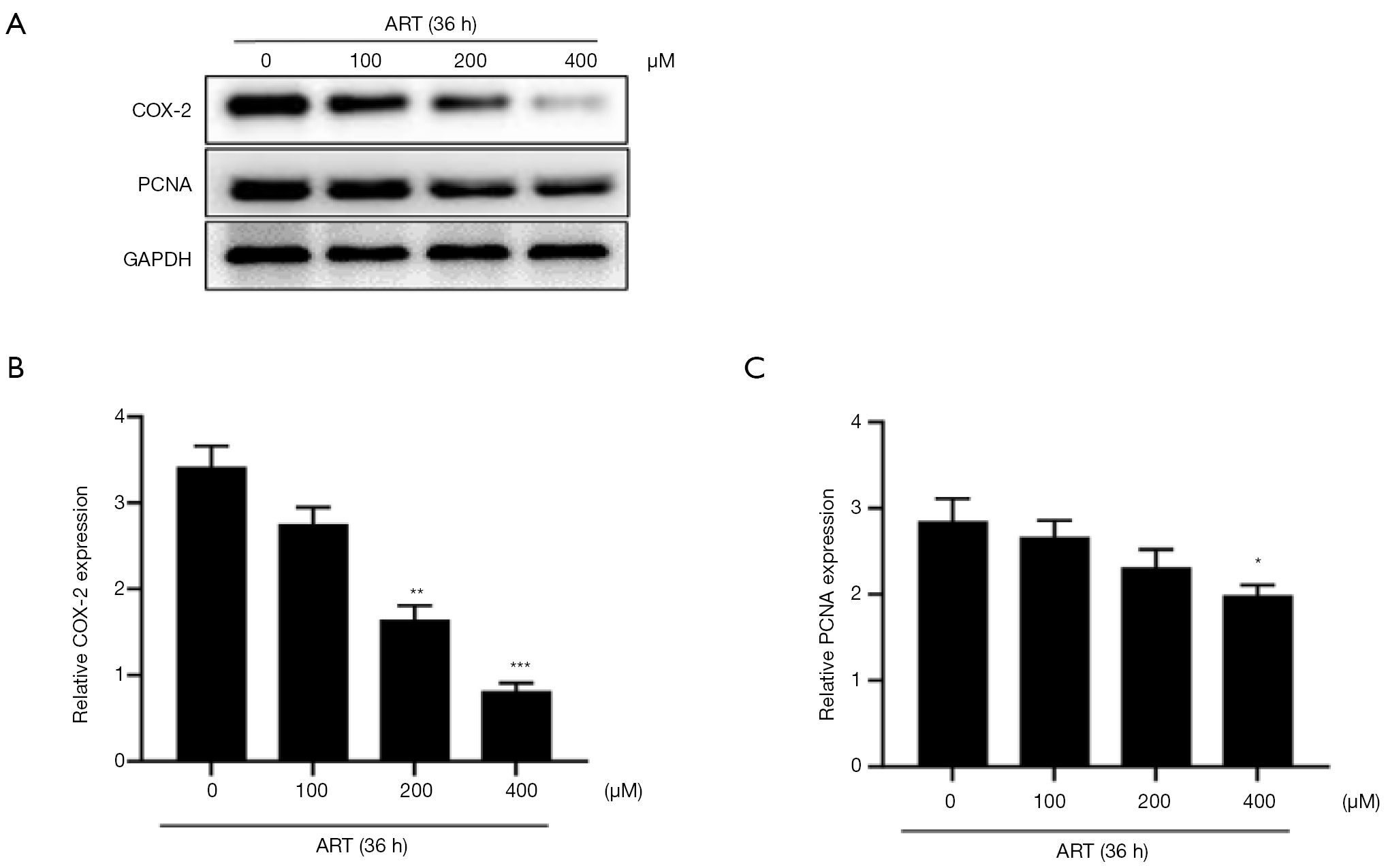 Estradiol can induce breast hyperplasia, and the AKT and NFκB pathways play an important role. In addition, AKT and NFκB can also be regulated by ART. To further confirm the effect and mechanism of ART on estradiol-induced mammary hyperplasia, we treated MCF-10A cells with estradiol and ART. As shown in Figure 2A, low expression levels of COX-2 and PCNA were detected in the Control group, while estradiol treatment significantly elevated the expression levels of these proteins. Administration of ART suppressed the protein expressions in a dose-dependent manner, and 200 µM achieved the most obvious inhibition (Figure 2B,C, COX-2: 200 vs. 0 µM vs. Control =1.56 vs. 6.32 vs. 1.04, P<0.001; PCNA: 200 vs. 0 µM vs. Control =2.18 vs. 4.72 vs. 1.01, P<0.001). Estradiol treatment elevated the phosphorylation of NF-κB, which was suppressed by 200 µM ART (Figure 2D). Moreover, ART alleviated the activation of NF-κB pathways in mammary epithelial cells (Figure 2E, pNF-κB: 200 vs. 0 µM vs. Control =1.48 vs. 5.74 vs. 1.01, P<0.001). 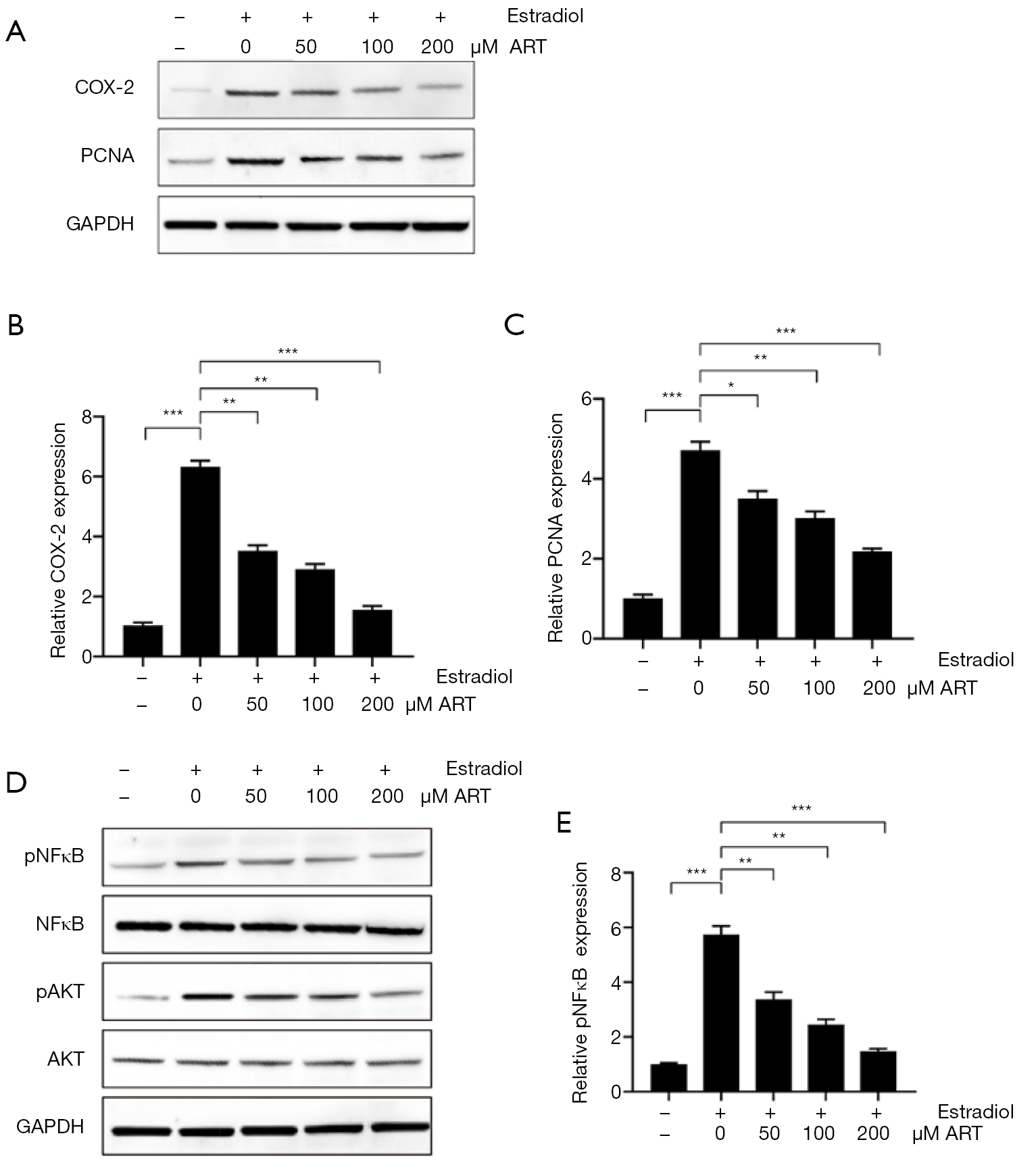 The above experiments confirmed that ART could inhibit estradiol-induced breast hyperplasia both in vitro and in vivo. To further explore the mechanism of this phenomenon, we examined the expression of AKT and NF-κB in the mammary glands of rats in each group. As shown in Figure 4A,B,C, phosphorylated AKT and NF-κB proteins were slightly expressed in PBS-treated breast tissue with/without ART treatment, and their expression levels were up-regulated in mammary gland hyperplasia induced by estradiol and progesterone. However, ART administration inhibited estradiol-induced phosphorylation of mammary AKT and NF-κB. Additionally, neither hormone nor ART treatment affected the expression levels of total AKT and total NF-κB.

Several Chinese patients with mammary gland hyperplasia are acutely aware of potential side effects induced by synthetic drugs. As a result, they prefer alternative treatments, such as traditional Chinese medicine. The drug ART is a kind of antimalarial agent isolated from Artemisia Annua, the sweet wormwood plant. The derivative, ART, a sesquiterpene lactone (a compound constituted by 3 isoprene units that are bound onto the cyclic organic esters), is obtained by distilling the Artemisia Annua flower clusters or dried leaves (23). This plant possesses fever-reducing (antipyretic) effects, which were initially identified in the 4th century CE by Chinese physicians, and this plant was then called Qinghao, and used as the natural remedy called Qinghao tea. On the one hand, the Qinghao remedy is usually used to treat malaria and hemorrhoids. On the other hand, ART has been proved to inhibit kinds of cancers, including breast cancer (24). Prostaglandin E2 (PGE2) serves as a pain indicator, and is also the primary eicosanoid produced via the COX-2 pathway within the mammary gland (25). The COX-2 exerts a vital role during the development of the breast at the early stage (26). Injection of estradiol causes COX-2 overexpression which in turn causes mammary hyperplasia in humans and mice. Although the elevated progression of breast epithelial cells has been considered to be associated with mammary gland hyperplasia, it has been debated whether it is an inflammatory disease. Our results showed a significant increase in COX-2 expression in excessive hormone-induced female rats’ breasts. The underlying mechanism of inflammatory signaling overactivation in promoting mammary gland hyperplasia should be further studied. The human normal breast epithelial cell line was used, which revealed that excessive estradiol treatment dramatically increased the cell proliferation in phenol-free red medium. Meanwhile, inhibiting the activation of NF-κB within the mammary glands in mice resulted in reduced lobuloalveolar proliferation during pregnancy (27), and meanwhile, elevating the activity of NF-κB resulted in hyperplasia of the mammary gland in vivo (1). Our results suggested that ART suppressed the activity of NF-κB signaling in vitro (Figure 2). Additional analyses in vivo indicated that the pNF-κB expression was significantly increased within the estrogen-treated mammary gland hyperplasia rats as compared to normal controls (Figure 3). In conclusion, findings in this study suggested the mechanism that ART represses NF-κB phosphorylation to reduce cell proliferation and inhibit mammary gland hyperplasia. Nonetheless, NF-κB serves as the multifunctional transcription factor and the NF-κB signaling pathway cross-talks with numerous other pathways in the regulation of mammary gland hyperplasia. More experiments are needed to illustrate the detailed mechanisms of ART in alleviating mammary gland hyperplasia.

It was indicated that the PI3K/AKT pathway exerts a role in the regulation of tumor genesis. The PI3K serves as a critical AKT activation regulator, many kinases and stimuli (such as estrogen) can promote proliferation of the AKT signaling pathway. As a result, the AKT pathway is activated, finally promoting cell survival and growth. Mutational activation and AKT pathway component amplification participate in the pathogenic causes of numerous cancers. Both Bad and Bax belong to the BCL-2 protein family. Over-expressed Bax accelerates cell apoptosis. The activation of growth factors in the PI3K/AKT signal transduction pathway peaks when Bad is phosphorylated, thus inhibiting apoptosis and accelerating survival of cells (28). The AKT has been identified as a promising therapeutic target, and the phosphorous AKT expression was found to negatively correlate with mammary gland hyperplasia in the current study. Besides, the efficacy of AKT inhibitors as monotherapies or combined with ART in treating the animal models with mammary gland hyperplasia was also measured. The complicated mechanism following AKT suppression indicated that more treatments should be used in combination to prevent resistance and improve the clinical response. Further studies are required to determine more rational combinations to improve AKT inhibitor efficacy through promoting apoptosis or targeting the compensatory mechanism. The identification of responsive biomarkers is necessary for the development of novel treatments.

Proliferative tissue is related to carcinogenesis; therefore, the mammary gland histology was analyzed in 8-week-old rats to examine the abnormal morphological changes. Based on Masson staining of mammary glands in rats, discontinued ductal epithelium and mild focal hyperplasia were observed in comparison with littermate controls. None of the rats had developed tumors at 2 months old. Fibroblasts often occur near tumors and contribute to malignancy; however, a previous study has revealed that fibroblasts and myoepithelium proliferation contribute very little to stromal tissues (27). That means that fibrosis may play an important role in the benign pathogenesis of mammary gland hyperplasia. Moreover, estrogen was used as a strong fibrotic inducer in cells. In this study, we found that blue-stained collagen fibrils deposited dramatically in the breast stroma, suggesting that excessive estradiol-induced fibrotic signaling could be blocked by ART treatment (Figure 3). Wen et al. found that ART mitigated the fibrosis and inflammation of tubulointerstitial nephritis in rats receiving 5/6 subtotal nephrectomy through the NF-κB signaling pathway (29). Thus, ART may suppress breast stromal fibrosis and extracellular accumulation by suppressing the activation of the NF-κB pathway. Our study was not without limitations: the mechanisms by which ART affects breast fibrosis remain to be further investigated, meanwhile it is necessary to enlarge the sample size of experiment in the further study.

In conclusion, our results firstly demonstrated that ART attenuated mammary hyperplasia by suppressing the AKT and NF-κB pathways in vitro and in vivo. Our findings indicated that ART may have therapeutic potential for the treatment of ductal fibrosis.

Funding: This study was supported by the “1166” Talent Project-Young and Middle-aged Experts of Dongfang Hospital Beijing University of Chinese Medicine (040204001001002025).

Reporting Checklist: The authors have completed the ARRIVE reporting checklist. Available at http://dx.doi.org/10.21037/atm-21-1447

Conflicts of Interest: All authors have completed the ICMJE uniform disclosure form (available at http://dx.doi.org/10.21037/atm-21-1447). The authors have no conflicts of interest to declare.

Ethical Statement: The authors are accountable for all aspects of the work in ensuring that questions related to the accuracy or integrity of any part of the work are appropriately investigated and resolved. The rats were kept within the approved animal facility, animal experiments were performed under a project license (No.: JDF-IRB-2014036302) granted by Institutional Animal Care and Use Committee of Dongfang Hospital Beijing University of Chinese Medicine, in compliance with institutional guidelines for the care and use of animals.