Despite significant advances in the development of screening methods and treatment technologies, cervical cancer therapy remains far from satisfactory and, of the major malignancies, cervical cancer remains the fourth leading cause of death for women worldwide, including those with a known family history (1,2). Nearly all cervical cancers are caused by the human papilloma virus (HPV) and just two HPV subtypes, 16 and 18, are responsible for approximately 70% of all cases (3). For more advanced or recurrent cervical cancer, multimodal therapy shows potential benefits with radiation therapy in combination with chemotherapy (2). Furthermore, in cases of aggressive recurrence of cervical cancer, a radical surgical approach is often adopted where the radiation treatment can be delivered either prior to surgery, concurrently, or postoperatively based on the prescribed treatment plan (4). Although improved disease control and survival have been achieved by radiotherapy in combination with chemotherapy, the treatment outcomes from external beam RT (EBRT) and brachytherapy (BRT) remain poor, and patients in the advanced stage of cervical cancer are at a high risk of recurrence or death, insofar as the 5-year overall survival rate is only 67% and nearly half (44%) of patients will experience a relapse (4,5). Furthermore, treatment efficacy and prognosis varies according to the different radiosensitivity of individual patients, with findings that some gene products improved the sensitivity of tumor cells via cell cycle control, apoptosis regulation, and DNA damage (6). Thus, precisely predicting treatment outcomes as a result of cervical cancer therapy remains problematic. One possible approach is to investigate the specific biomarkers in cervical cancer and advanced molecular profiling of the tumor, eventually predict the individual patient’s prognosis and response to radiotherapy more accurately (7).

Slit2, a human homolog of the Drosophila Slit2 gene, is one of the most important members of the SLIT family of large secreted proteins, and has been shown to guide axons and induce neuron migration by interacting with Robo receptors (8-10). Besides its vital role in guiding the projection of normal axons and neuron development, Slit2 is also expressed in other non-neuronal tissues such as the heart, lungs, and kidneys, indicating other significant roles in addition to axon guidance (11). Furthermore, it has been recently confirmed that Slit actively participates in tumor development. For instance, Wang et al. demonstrated that Slit secreted by cancer cells could attract vascular endothelia cells for the development of tumor-associated blood vessels to further support tumor growth, as evidenced by angiogenesis in a xenograft model of human melanoma cells (11). In addition, Slit-Robo4 has also been shown to act as a chemoattractant that interacts with endothelia cells for angiogenesis (12). More recently, researchers found that higher tumor vasculogenesis was associated with an upregulation of Slit expression, as evidenced by an increased VEGF expression and microvessel density in a chemically induced squamous cell carcinoma model, suggesting that Slit could be an important biomarker that is closely associated with tumor development (13). To further validate this, a monoclonal antibody against Robo1, a Slit receptor, was applied to competitively block the interaction of Slit-Robo. The results showed a significant inhibition of tumor angiogenesis after treatment with the antibody, suggesting the crucial role of Slit in tumor progression.

R-spondin1 (Rspo1) is an important member of a protein family containing secreted furin-like domains, which has been demonstrated to interact with the Wnt signaling pathway by stabilizing intracellular β-catenin and influencing externalization of the LRP6 receptor (14). Furthermore, the expression of Rspo1 has been found in mouse ovaries and other major organs (15,16). In addition, Rspo1 has been found to play a critical role in ovarian cancer development and correlates positively with tumor progression (17,18).

Between March 2015 and September 2015, a total of 34 confirmed cervical cancer patients aged 31–57 years (mean age 44.9 years) were admitted to the Obstetrics and Gynecology Hospital of Fudan University. All patients were staged clinically according to the International Federation of Gynecology and Obstetrics (FIGO) staging criteria, and patients with a diagnosis of stage IB1–IIA2 were included in the present study. The distribution of grades was as follows: stage IB1 (n=21), stage IB2 (n=4), stage IIA1 (n=8), and stage IIA2 (n=1). All procedures performed in this study involving human participants were in accordance with the Declaration of Helsinki (as revised in 2013). The study was approved by the ethics board of Shanghai Obstetrics and Gynecology Hospital of Fudan University (No.: 2021-27) and informed consent was taken from all the patients.

As phase I of the study, we recruited 34 patients with FIGO stage IB1~IIA2 who were scheduled to receive surgery in our hospital and who received chemotherapy and/or radiotherapy postoperatively. The recruited patients’ age, gravidity, parity, height, weight, menopausal status (pre-menopausal or menopausal), pre-operative use of hormonal drugs (if any), pre-operative blood tests (including platelet counts, mean platelet volume, hematocrit, neutrophil count, aPTT, PT, TT, fibrinogen, INR, D-dimer (if tested), WBC, and Hb levels), and the presence or absence of chronic conditions, such as diabetes, hypertension, and cardiovascular disease were recorded. A 10 mL blood sample was collected in a heparin-containing tube and stored at −20 °C for further use. The blood sample was also evaluated for plasma Rspon1 and Slit2 by an ELISA assay kit.

Two weeks after the start of chemotherapy or radiotherapy, another 10 mL of blood was collected for the plasma Rspond1 and Slit2 measurements, as well as for routine blood counts (including platelet counts, mean platelet volume, hematocrit, neutrophil count, aPTT, PT, TT, fibrinogen, INR, D-dimer (if tested), WBC, and HB levels). In addition, the RTOG acute radiation morbidity on different tissues/organs, such as skin, mucous membrane, eye, ear, salivary gland, pharynx and esophagus, larynx, upper and lower GIs including pelvis, lung, genitourinary, heart, and CNS, were evaluated and scored.

At the conclusion of the postoperative chemotherapy and/or radiotherapy treatment, the name, dose and duration of chemotherapy was recorded, and the dose, schedule, and overall duration of the external beam radiotherapy (EBRT) as well as high-dose rate (HDR) intracavitary brachytherapy (ICBRT) and total effect for the dose schedule was recorded. A final blood sample was drawn for the plasma Rspo1 and Slit2 measurements and for further routine blood counts (including platelet counts, mean platelet volume, hematocrit, neutrophil count, aPTT, PT, TT, fibrinogen, INR, D-dimer (if tested), WBC, and HB levels). The RTOG acute morbidity scores were evaluated again. After completion of treatment, the patients were followed up regularly with examinations at 6, 12, 24, 36, 48, and 60 months after surgery.

The blood samples were centrifuged by 2,000 g for 10 minutes and the supernatant was collected. Slit2 and Rspo1 serum expression levels were measured by ELISA kits (Cloud-Clone Corp., Wuhan, Hubei, China; R&D Systems, Inc., Minneapolis, MN, USA, respectively) according to the manufacturer’s instructions (19). The amount of these cytokines was quantified as the absorption at 450 nm. All samples were evaluated in duplicate.

For the descriptive statistics, a boxplot was used to graphically depict the Rspo1 and Slit2 expression data groups, in which the bottom and top of the box represent the lower and upper quartiles, respectively, the band near the middle of the box represents the median, and the ends of the whiskers represent the smallest and the largest non-outlier observations (20). To evaluate the effect of Rspo1 and Slit2 expression levels and other possible factors related to radiosensitivity, a logistic regression model was used. P values <0.05 were considered statistically significant. All computations were made with R 4.0.4. 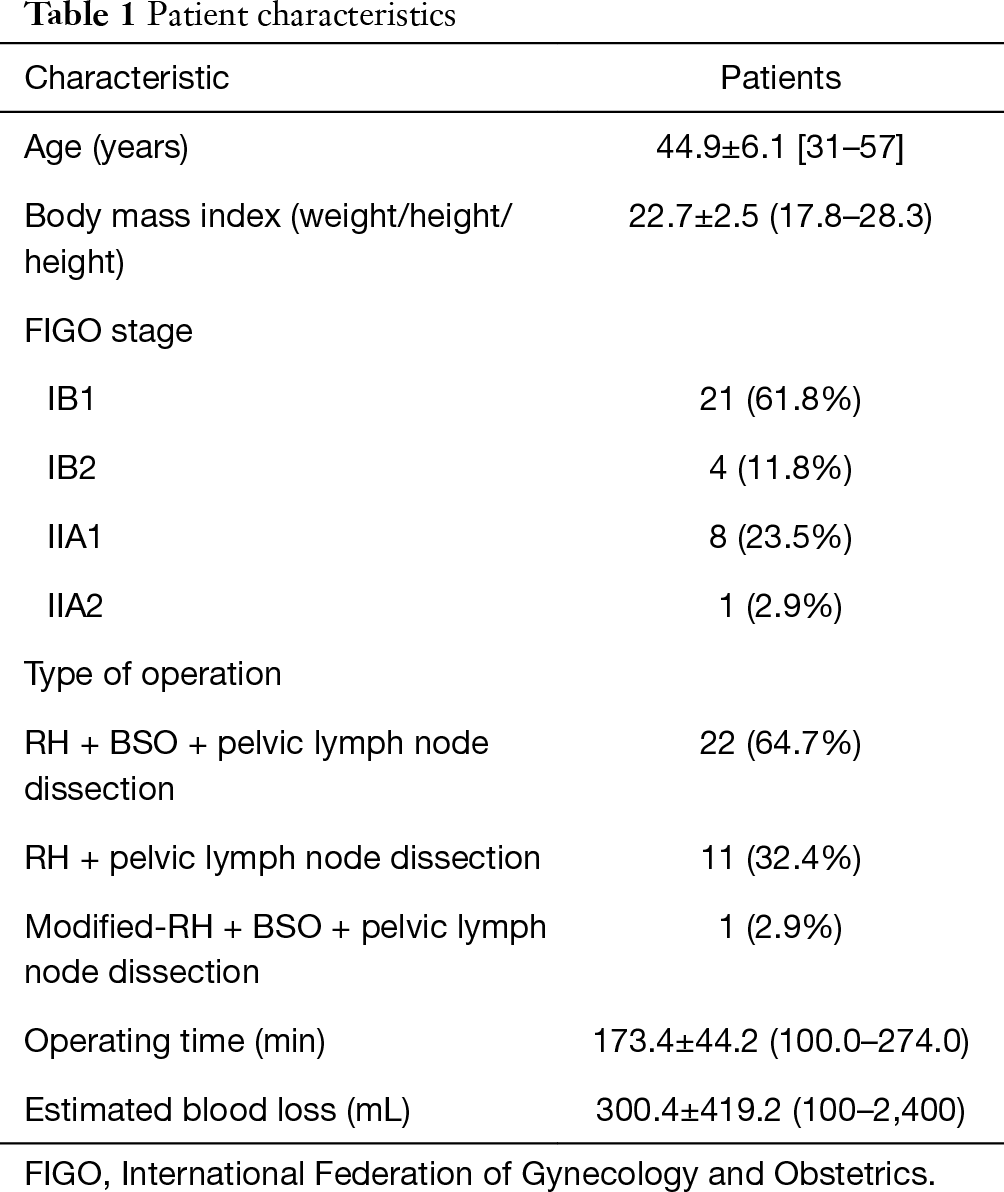 Figure 1 Rspo1 and Slit2 expression level in serum. Neither Slit2 levels (A) nor Rspo11 levels (B) changed significantly after CT1, radiotherapy, or CT2.

Morbidity scores and number of therapies

The acute radiation morbidity scoring criteria were used to evaluate the efficiency of treatment after the first chemotherapy (CT1), radiotherapy (RT), or the second chemotherapy (CT2). As shown in Figure 2A, compared to a zero score at CT1, the neurological sensory score rose to one after RT or tCT2. However, there were no differences between RT and CT2. The mean infection scores after CT2 were significantly higher than CT1 and RT, but statistically there was no significant difference between CT1 and RT (Figure 2B).

The correlation between Rspo1 and clinical pathological parameters 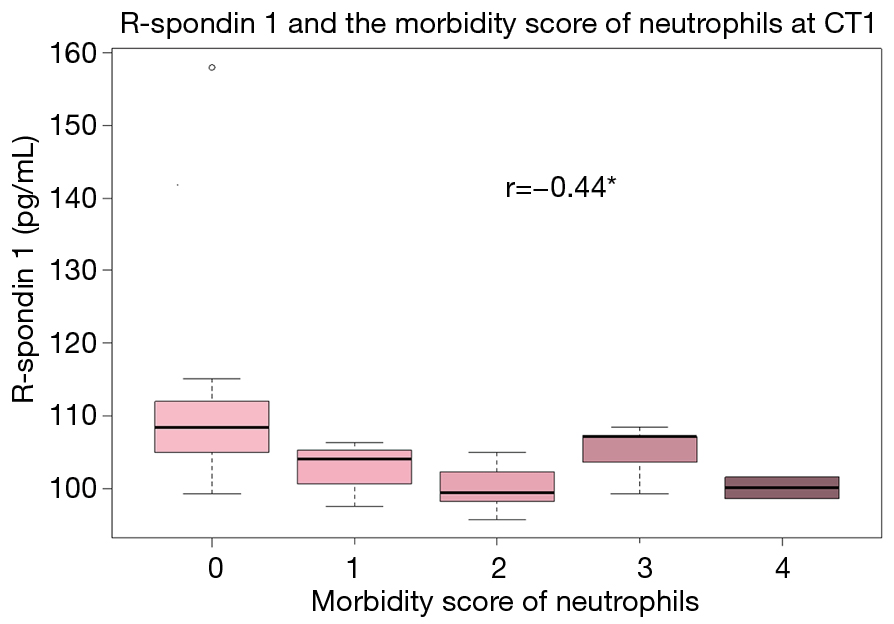 Figure 3 The levels of R-spondin1 inversely correlates to the morbidity score of neutrophils at CT1. *, P<0.05. 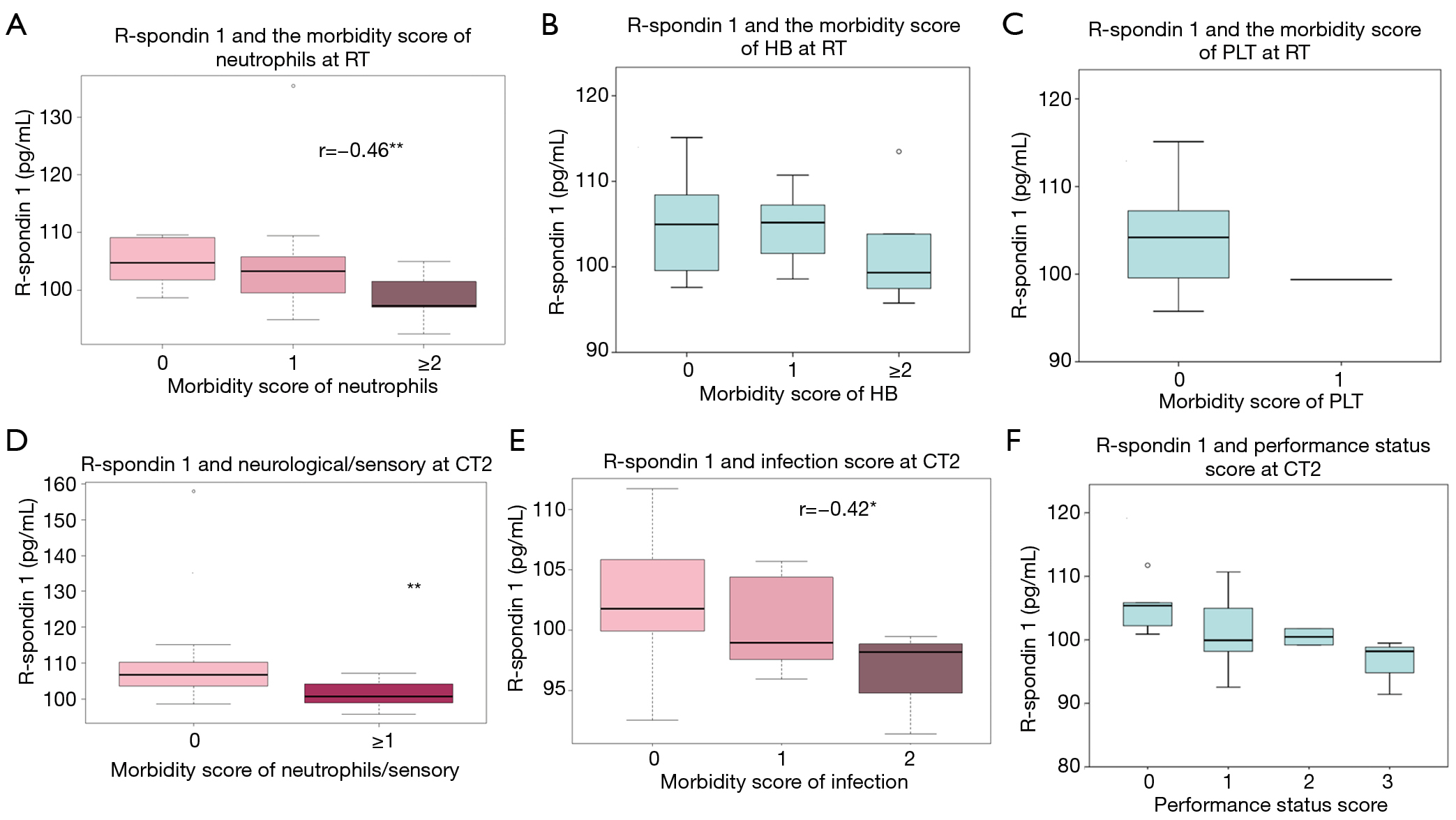 The correlation coefficient between Rspo1 and the clinical pathological parameters was also evaluated. As shown in Figure 4D,E,F, when the neurological/sensory score was greater than one, the Rspo1 staining level significantly decreased to less than 100 pg/mL after CT2. In summary, Rspo1 levels were inversely correlated with the morbidity score of neutrophils, the infection score (r=−0.42), and the performance status at CT2.

The correlation between Slit2 and clinical pathological parameters 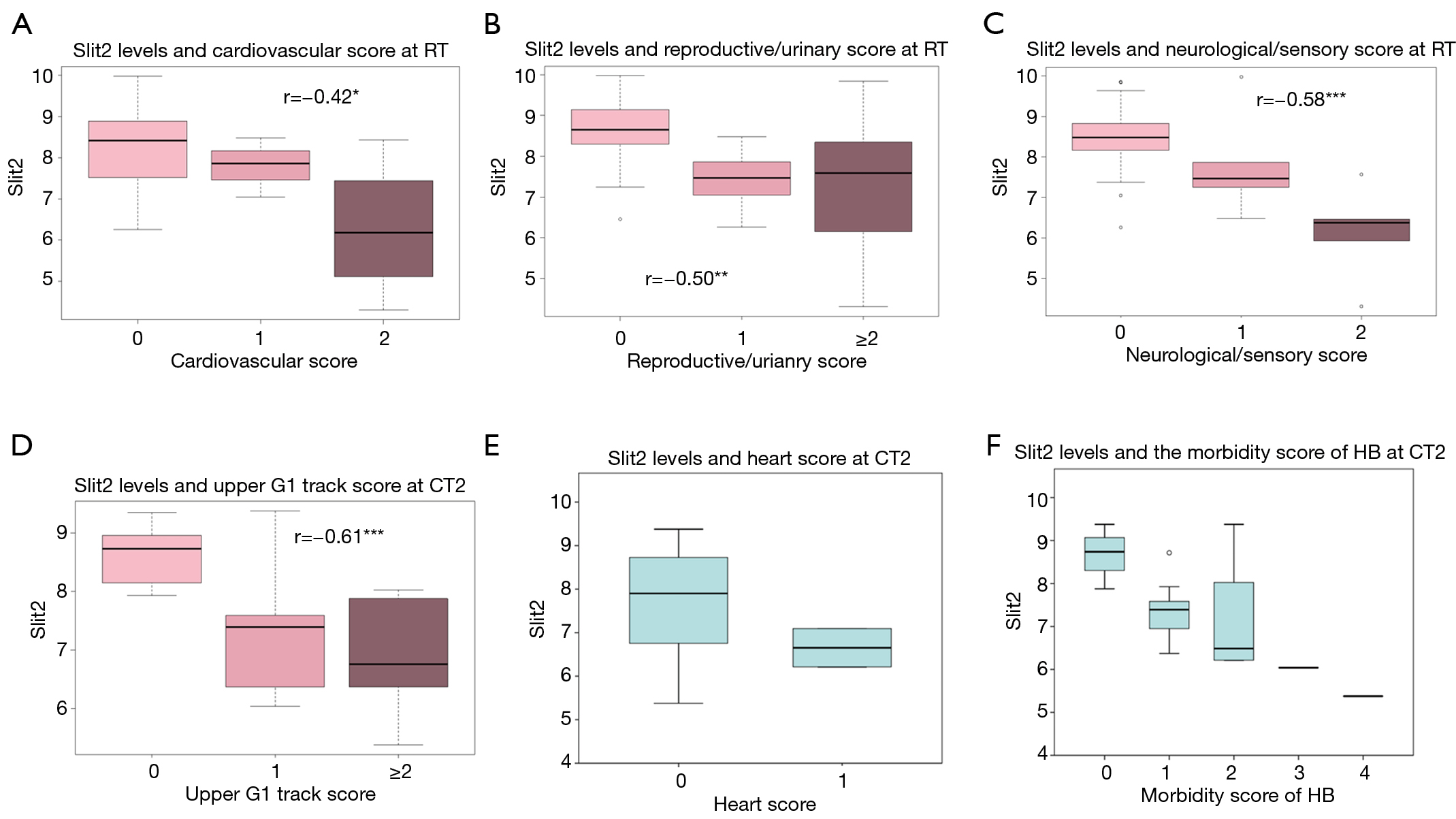 Radiosensitivity varies among individual patients due to the heterogeneity of cervical cancer (6,21,22). Numerous efforts have been made to identify predictive biomarkers and molecular targeted drugs although little progress has been made, especially in radiotherapy (7). Therefore, it is necessary to explore the biological mechanisms and related interactive factors associated with radiosensitivity (23). Recently, researchers have observed that Rsop1 and Slit2, which are promising indicators for the prediction of outcomes in advanced cervical cancer patients, have proven to play an important role in regulating the development, progress, and vasculogenesis of various tumors (14,16,24). Therefore, this study aimed to explore the expression levels of Rspo1 and Slit2 and their correlation with clinicopathological features in postoperative cervical cancer patients.

We used ELISA kits to compare the serum Rspo1 and Slit2 levels of all patients and analyzed the correlation coefficient between the predicted biomarkers and the clinical pathological features. We found no significant changes of Rspo1 and Slit2 levels between CT1, RT or CT2 groups. However, the neurological sensory scores and influence of infection scores were elevated with increasing rounds of therapies. In addition, Rspo1 expression levels correlated negatively with the morbidity score of neutrophils, infection score, neurological sensory score and performance status at CT1 and CT2 separately. The Rspo1 level was also inversely correlated to the morbidity score of hemoglobin, platelet, and neutrophil following RT. Our results showed that human serum Slit2 was negatively correlated with the genitourinary, heart, and neurological sensory scores following RT, and inversely correlated to the upper GI tract score following CT2 with a statistically significant difference.

Slit2 was first characterized in neuronal development and was found to interact with Robo1 to mediate myogenesis, endothelial cell migration (25), and leukocyte chemotaxis (26). Slit2 has been shown to induce tumor angiogenesis and to regulate lymphangiogenesis in various human cancers (11,27). A previous study reported that a short pulse of Rspo1 plus Slit2 reduced intestinal stem cell loss, mitigated gut impairment, and prolonged overall survival in mice without concomitantly decreasing tumor sensitivity to chemotherapy (14). The results of our study are consistent with previous studies on Rspo1 and Slit2, since they were negatively correlated with neutrophil and neurological sensory scores. From our results, we suggest Rspo1 plus Slit2 may have a specific role in monitoring the tolerance of cervical cancer patients to aggressive chemotherapy and/or radiotherapy.

This project was initiated at the suggestion of Professor Jianguo Geng of the University of Michigan at Ann Arbor, whose work on R-spondin–augmented chemoradioprotection inspired us. We thank Professor Geng for his generosity in sharing his thoughts and insights.

Reporting Checklist: The authors have completed the MDAR reporting checklist. Available at http://dx.doi.org/10.21037/atm-21-87

Conflicts of Interest: All authors have completed the ICMJE uniform disclosure form (available at http://dx.doi.org/10.21037/atm-21-87). The authors have no conflicts of interest to declare.

Ethical Statement: The authors are accountable for all aspects of the work in ensuring that questions related to the accuracy or integrity of any part of the work are appropriately investigated and resolved. All procedures performed in this study involving human participants were in accordance with the Declaration of Helsinki (as revised in 2013). The study was approved by the ethics board of Shanghai Obstetrics and Gynecology Hospital of Fudan University (No.: 2021-27) and informed consent was taken from all the patients.