In breast cancer (BC), preclinical and clinical studies highlighted the role of MET deregulation on carcinogenesis and development of aggressive phenotypes, as suggested by the higher incidence of mammary invasive carcinomas in mouse models harbouring MET mutations (16). Moreover, an imbalance in MET expression between neoplastic lesion and adjacent normal tissue is associated with aggressive behaviour of in situ ductal carcinoma (DCIS) (17). Across all BCs, MET is over-expressed in at least 20-30% of cases, with difference related to methods and scoring system used for biomarker testing (18). Several investigations showed a preferential, but not exclusive, expression in basal-like (BL) subgroup, mostly represented by triple negative breast cancer (TNBC). However, up-regulation of HGF/MET axis represents a strong and independent predictor of poor outcome and aggressiveness, irrespective of histological subtype (19,20). Available data suggest that molecular events, such as MET mutation or amplification, are rare in primary BC tumours (21,22). Finally, in advanced stage disease, MET deregulation plays a critical role in cancer progression and development of acquired resistance to target agents, including trastuzumab (23).

Aim of this review is to discuss available data on MET deregulation and its therapeutic implications in BC.

MET/HGF expression as a prognostic factor in BC

During the 90s, several studies showed a potential prognostic relevance of HGF/MET expression in BC. In 1994, Yamashita and colleagues measured the intra-tumour immunoreactive (ir)-HGF concentration of 258 primary human BCs. Patients with high ir-HGF concentration had a significantly shorter relapse-free survival (RFS) and overall survival (OS) when compared to those with low ir-HGF concentration. In multivariate analysis, ir-HGF level was the most important independent factor in predicting RFS and OS, greater than lymph node involvement (24). Furthermore, in a retrospective series of 113 node-negative BC cases, Camp et al. demonstrated that high-MET vs. low-MET expression in the primary lesion significantly impact on 5-year survival. Interestingly, the authors described, at the time of relapse, an increased rate of MET over-expression also in patients with previously negligible value, suggesting a possible selection of MET-positive clones in the process of progression (25). Subsequently, using a tissue microarray, Kang and co-workers confirmed the strong and negative prognostic relevance of MET expression in a cohort of 330 node-negative breast carcinomas. In the study, also matriptase and HAI-I, an HGF-activator expressed on mammary epithelium and its cognate inhibitor respectively, were associated with poor patient outcome. The prognostic impact of MET expression was independent by the traditional BC biomarkers, as confirmed in the multivariate analysis (26). Recently, using a reverse phase protein array, Raghav et al. assessed, once more, the negative role of MET expression on patient outcome among 257 BCs cases. The level of MET and phoshpo-MET, its activated form, had a strong prognostic impact in BC patients, while no significant differences in mean expression of both biomarkers were seen among the different subtypes (19). In addition, in the 2014, Baccelli and colleagues investigated the role of MET and CD47, a ligand involved in cancer cell evasion from macrophage scavenging, on BC patient outcome. The expression of both biomarkers was assessed with immunohistochemistry (IHC) in a series of 255 hormone receptor-positive early BCs. The authors described a 10.3-year mean OS difference between MET/CD47 double-positive and double-negative cases, demonstrating a novel and independent couple of prognostic factors and underling again the relevance of MET over-expression in term of patients’ outcome (20).

Recently, a comprehensive meta-analysis including 6,010 cases showed that MET over-expression is significantly associated with poor survival in BC patients, especially in the TNBC patients. The results of subgroup analysis suggest that, in Asian and HER2 positive BC individuals, MET expression might not be associated with prognosis (27).

In summary, collecting all these clinical data together, MET over-expression results as a robust negative prognostic factor for BC patients, regardless of evaluation method used or cancer subtypes.

Role of MET in BLBC and TNBC

BLBC accounts for 10% to 20% (Figure 2) of all BCs and represents an aggressive subgroup of mammary carcinoma, with worse prognosis and limited therapeutic options. BLBCs are characterized by high histological grade and mitotic indexes, pushing borders and large areas of necrosis. IHC features of BL tumours usually include lack of hormonal and human epidermal receptor-2 (HER2) expression, positivity of one or more basal cytokeratins (e.g., CK5/6, CK14 and CK17) and/or expression of HER1 [also named epidermal growth factor receptor (EGFR)]. Among cancers with BL features, TNBCs are the main prominent with a global incidence of approximately 15% (28). Currently, chemotherapy is the only modality of systemic therapy available for patients with BL and triple-negative disease, although, in the small group of BRCA1 and BRCA2 mutated BC patients, poly (ADP-ribose) polymerase (PARP) inhibitors may have a therapeutic role (29). For such reasons, the identification of targetable biomarkers is an urgent clinical need and a major theme of discussion (28). 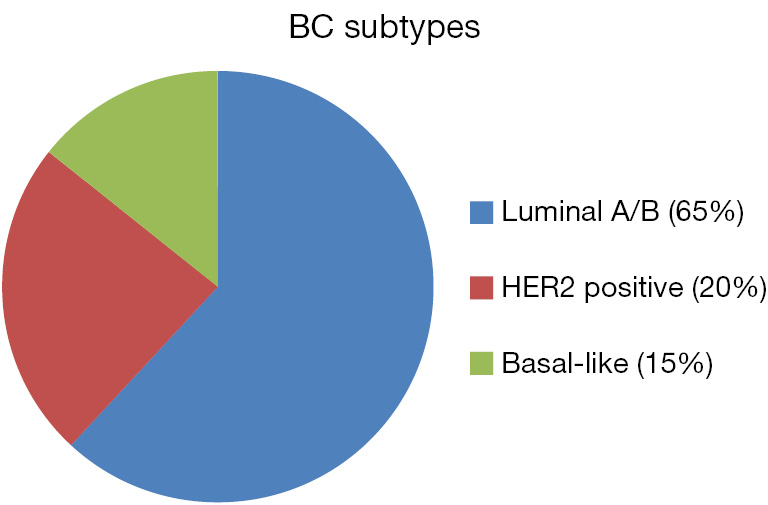 In preclinical models, genomic and proteomic analyses led to dichotomize BC into two main groups: the luminal and the BL subtype (30,31). In gene expression profile of BC cell lines, comparison between BL and luminal cluster showed differential expression of MET gene (30,31). Clinical studies confirmed these findings. In 2007, Garcia and colleagues analyzed 930 BC specimens by using IHC, demonstrating a strong association between high MET levels and expression of basal-cluster features, such as CK5, CK6, caveolin 1, c-KIT and p63 (32). On these bases, MET over-expression could be considered as an additional constituent of BL phenotype. Similar results were obtained in some other studies conducted in both early and metastatic diseases, thus confirming that MET is preferentially expressed in BLBC (31,33). In addition, these studies suggested that high MET expression levels correlated with worse prognosis. Recently, Ho-Yen and colleagues analyzed 1,274 primary tumour samples of early BC aiming to evaluate the relationship between MET IHC expression and BC subtypes (34). Authors found that MET was independently associated with BL feature (odds ratio =6.44; P=0.005). More interestingly, MET over-expression negatively affected RFS in all subtypes [hazard ratio (HR) =1.85; P=0.027], with a trend toward reduced OS in BL tumors (33). Similarly, a strong correlation between BL features and MET over-expression (57.5%, P<0.001) has been found by Kim and co-workers, which analyzed 924 BCs specimens using IHC (35). The study also confirmed the prognostic impact of high-MET expression levels in terms of recurrence (DFS, P=0.010) and survival (OS, P=0.001). More interestingly, the same authors demonstrated that, in TNBC cell lines, MET levels were high and MET inhibition by RNA-interference reduced cell proliferation and migration, suggesting the potential therapeutic role of MET inhibition in TNBC patients (35).

Recently, as previously described, a large meta-analysis including more than 6,000 BC cases confirmed that, especially in TNBC patients, MET over-expression is significantly associated with worst survival (27).

Several evidences suggest that MET deregulation plays a critical role in the development of acquired resistance to targeted agents through a functional interaction, the so called “cross-talk”, with other TK receptors, particularly with EGFR family. In a preclinical model, Engelman and colleagues demonstrated that MET amplification was responsible for acquired resistance to first-generation EGFR TK inhibitors in up to 20% of EGFR-mutant NSCLCs (37). Similarly, Bardelli et al. showed that MET amplification driven de novo and acquired resistance to anti-EGFR monoclonal antibodies cetuximab and panitumumab in metastatic colorectal cancers, both in vitro and in vivo models (12).

As HER2 belongs to EGFR family and represents a therapeutic target in BC (38), several studies have investigated the potential impact of MET status in modulating efficacy of anti-HER2 strategies. In 2007, Lindeman and colleagues firstly demonstrated that MET over-expression occurred in approximately a quarter of HER2-positive BC cases, suggesting that HER2 and MET could have a synergistic effect in promoting tumour growth and aggressiveness (17). Therefore, in a preclinical model, Shattuck et al. reported that a significant proportion of HER2-positive tumours also displayed high levels of MET expression by Western blot analysis (23). In addition, authors demonstrated that MET could contribute to resistance to the anti-HER2 monoclonal antibody trastuzumab. Indeed, in cell lines MET inhibition, either through RNA interference-mediated depletion or small molecule-mediated inhibition, increased sensitivity to trastuzumab while MET activation protected cells from the anti-apoptotic effects of trastuzumab by preventing drug-mediated p27 induction. More recently, a preclinical study evaluating MET/HER2 “cross-talk” in human BC, confirmed that a relevant percentage of HER2 positive cases co-expressed MET and HER2, despite an intratumoral heterogeneity (39). In a double positive (MET+/HER2+) BC cell-line the authors showed that MET depletion resulted in increased HER2 activation and, conversely, HER2 depletion resulted in MET activation. Moreover, functional analysis of TK receptors activation during HER2 knockdown indicated that MET signaling was a compensatory pathway of resistance.

In 2013, we retrospectively analyzed a cohort of 130 HER2-positive metastatic BC patients, aiming to evaluate the impact of MET and HGF GCN in predicting trastuzumab-sensitivity (40). Increased MET or HGF GCNs were detected in approximately one-fourth of cases and were significantly associated with higher risk of treatment failure. Indeed, MET FISH-positive cases (n=36) had both significantly higher trastuzumab failure rate (P=0.001) and shorter time to progression (HR =1.74; P=0.006) than MET FISH-negative cases. Also HGF FISH-positive status (n=33) significantly associated with higher risk of failure (P=0.007) when compared with HGF FISH-negative cases.

In summary, our data suggested that in HER2 positive BCs, MET/HGF GCNs increased the risk of trastuzumab failure, thus supporting the investigation of dual HER2 and MET inhibitors in such population. Notably, our experience confirmed the absence of MET amplification in HER2-positive cases, as reported in previous other investigations (22,40).

Anti-MET agents under investigation in BC

There are at least four possible strategies that are useful for blockade of the HGF/MET pathway, including agents interfering with HGF binding to MET, anti-MET monoclonal antibodies, small molecule MET TK inhibitors, and small molecule inhibitors of the downstream pathways. Data from preclinical studies suggest that the modality of HGF/MET activation (i.e., autocrine/paracrine stimulation, gene amplification or gene mutation), could predict the class of agents more likely to interrupt the signalling pathway. A list of anti-MET agents currently under investigation in metastatic BCs patients is shown in Table 1. Notably, the majority of these agents are TK inhibitors and restricted to BL/TN BC patients.

Table 1 Anti-MET compounds under investigation in BC
Full table.

In the last years, many progresses have been made in the understanding of HGF/MET signaling pathway in cancer development and progression. Literature data also supported its critical role in mammary tumours and several studies have clearly demonstrated that high level of MET expression correlated with worse prognosis, both in early and advanced stage.

Treatment of metastatic BC is now based on hormonal and HER2 status. Today, endocrine treatments as well as anti-HER2 agents, alone or in combination with chemotherapy, offer to metastatic BC patients the concrete possibility to prolong survival and preserve their quality of life. Unfortunately, for patients defined as TN, therapeutic options remain limited and largely unsatisfactory, with long-lasting disease control representing a major challenge. As MET over-expression often correlates with poorly differentiated and aggressive disease including BL/TN BCs, MET inhibition could be beneficial in this particular group of patients and results of ongoing trials exploring the activity of anti-MET agents are urgently awaited.

Finally, “cross-talk” of MET with other TK receptors seems in part explain the failure of target agents, particularly trastuzumab. As a consequence, combination of anti-HER2 and anti-MET strategies could represent a suitable option to delay or possibly overcome acquired resistance, at least in those cases displaying MET alteration, such as amplification or high GCN. At this proposal, it is important to remember that only a proper selection of patients, through prognostic/predictive models and validated biomarker, can lead to identify those individuals who may maximally benefit from tailored treatments, such as anti-MET agents.