Extranodal natural killer/T-cell lymphoma (NKTCL), nasal type is a predominantly extranodal lymphoma with a highly aggressive clinical course. It always has an extranodal presentation. The upper aerodigestive tract (UAT) is most commonly involved, with the nasal cavity being the typical site of involvement. NKTCL from the UAT is referred to as nasal NKTCL, while NKTCL occurring outside the UAT is usually referred to as extra-nasal (or non-nasal) NKTCL, preferential sites of which include the skin, soft tissue, the gastrointestinal (GI) tract, and the testes (1,2). Nasal NKTCLs frequently present as stage I/II disease with favorable outcomes, while extra-nasal NKTCLs often present as stage III/IV disease with more aggressive clinical features and inferior survival (1,3,4).

Historically, the prognosis of NKTCLs, especially those in the advanced stage (stage III/IV), has been poor. The emergence and application of modern therapies (e.g., asparaginase-based regimens) have possibly improved the outcomes of patients with NKTCL since 2010, however, these improved outcomes attributed to modern therapies have not been demonstrated in randomized trials (5-7). The study by Yamaguchi et al. demonstrated that the prognosis of nasal NKTCLs but not extra-nasal NKTCLs improved in the new era, suggesting that the survival benefits provided by modern therapies were different for nasal and extra-nasal NKTCLs (8). Nevertheless, this study was based on an Asian population, and whether the findings from this study can be replicated in Western populations remains unknown. Additionally, cases of nasal NKTCLs could be classified into nasal cavity NKTCLs and NKTCLs from other UAT sites, and a previous study suggested that these 2 subgroups had different clinical characteristics, immunophenotypes, and survival outcomes (9). Whether the survival trends of these two subgroups are similar or different remains to be determined. Therefore, we conducted a retrospective study using the US Surveillance, Epidemiology, and End Results (SEER) database (1987 to 2016) to analyze the trends in survival for nasal and extra-nasal NKTCLs. We also stratified these patients according to different parameters to study the variance in survival trends among different subgroups. We present the following article in accordance with the STROBE reporting checklist (available at http://dx.doi.org/10.21037/atm-21-1748).

The SEER database is representative of the US population, with patient-level data abstracted from 18 geographically diverse populations that represent rural, urban, and regional populations (10). NKTCL cases between 1987 and 2016 in the SEER public access database and their corresponding details were retrieved with the use of SEER*Stat version 8.3.8 software. Patients were uniformly reviewed and staged according to the Ann Arbor staging system. All of the SEER data are de-identified and analysis of the data does not require institutional review board approval or informed consent from the patients. The study was conducted in accordance with the Declaration of Helsinki (as revised in 2013).

Fisher’s exact test was used to compare variables between the two groups. Considering the emergence and application of modern therapies (e.g., asparaginase-based regimens) since 2010, we therefore roughly regarded 1987–2009 as the old therapy era and 2010–2016 as the modern therapy era. Overall survival (OS) was defined as the time from diagnosis to death from any cause or the last follow-up. Cancer-specific survival (CSS) was defined as the time from diagnosis to death resulting from NKTCL or the last follow-up. Survival curves were constructed using the Kaplan-Meier method. Differences in survival were tested for statistical significance using the log-rank test. Multivariate analysis was conducted using the multivariate Cox model. All statistical analyses were performed using SPSS for Windows (version 18.0; IBM Corporation, Armonk, NY, USA) and GraphPad Prism 7.0 (Graph Pad Software Inc., San Diego, CA, USA). All P values represented were two-sided, and P<0.05 was defined as statistically significant. 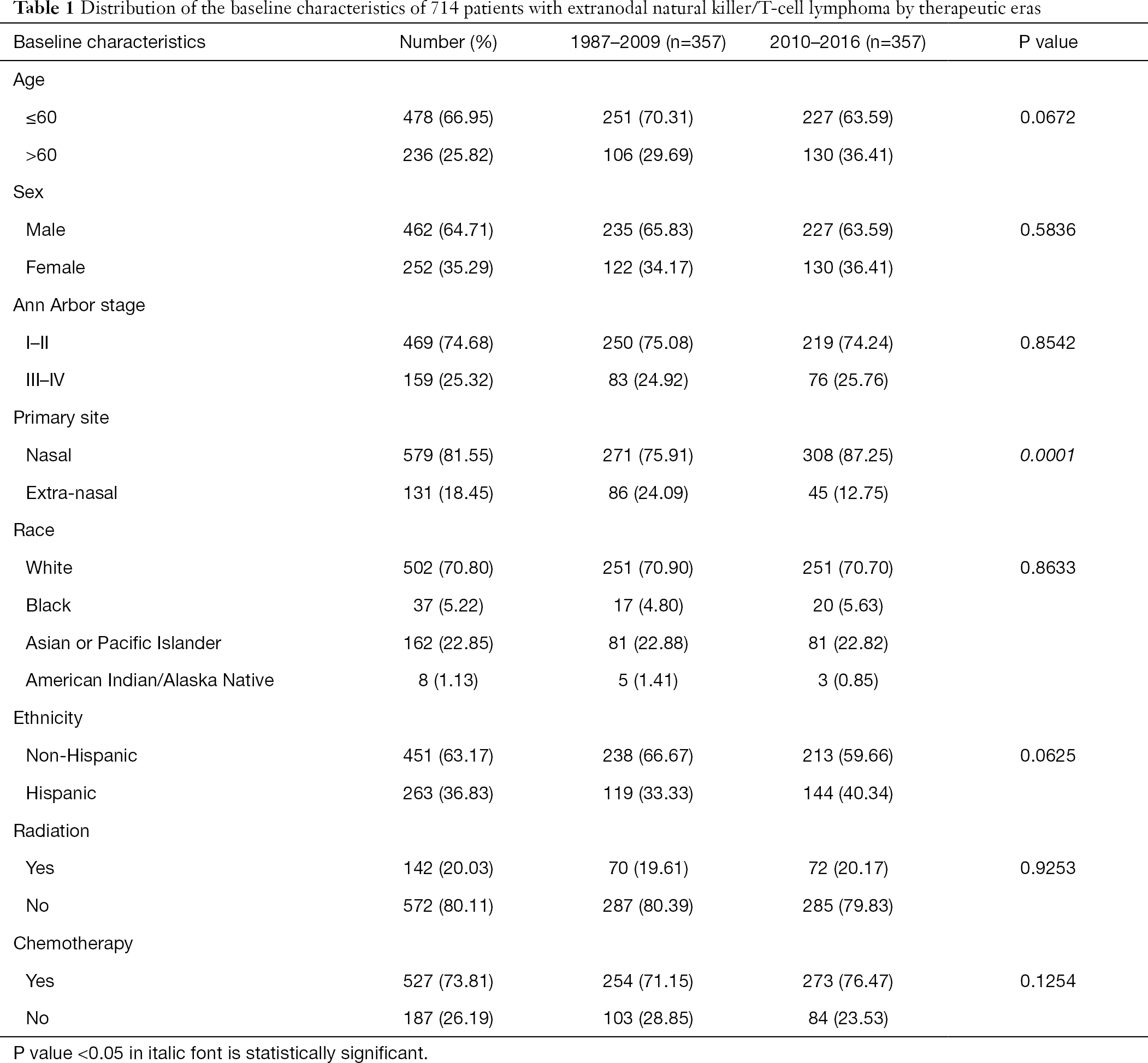 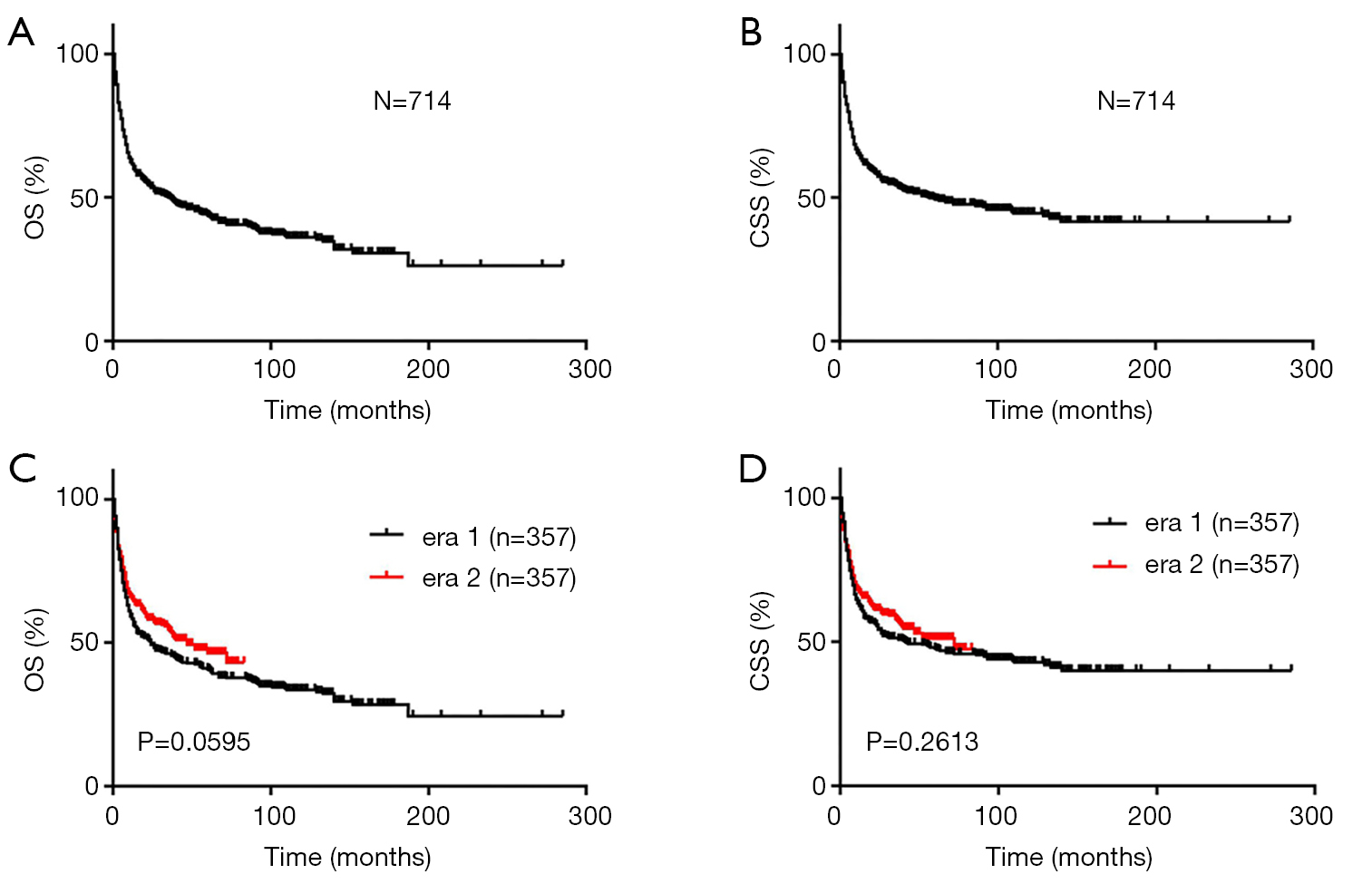 Univariate analysis showed that age >60 years old, advanced Ann Arbor stage, primary extra-nasal involvement, and no radiation were significantly associated with shorter OS and CSS (Table 2). Subsequently, these variables were entered into the multivariate models, which further revealed that they maintained their prognostic value for OS (Table 3), while only advanced Ann Arbor stage and no radiation independently predicted worse CSS. 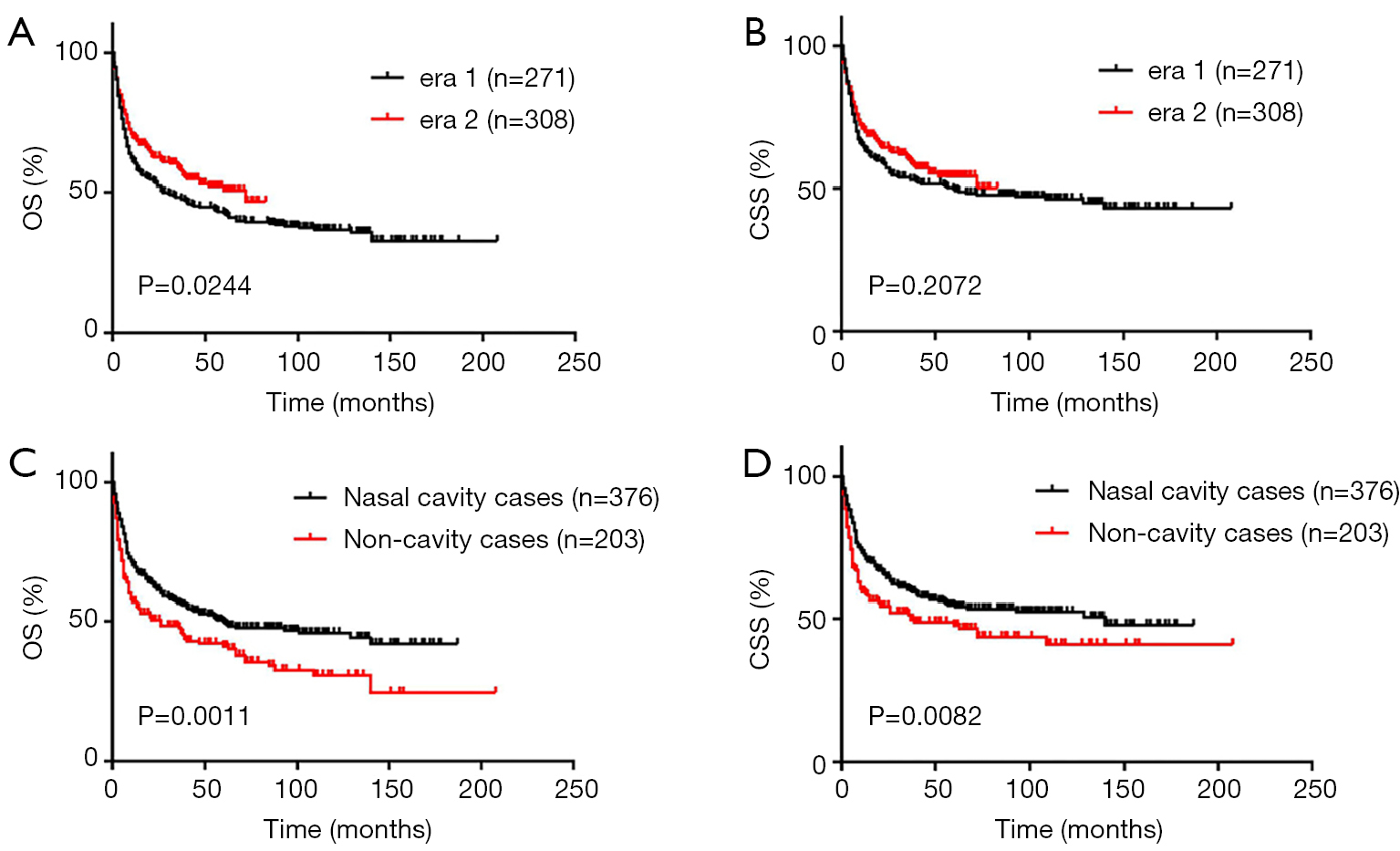 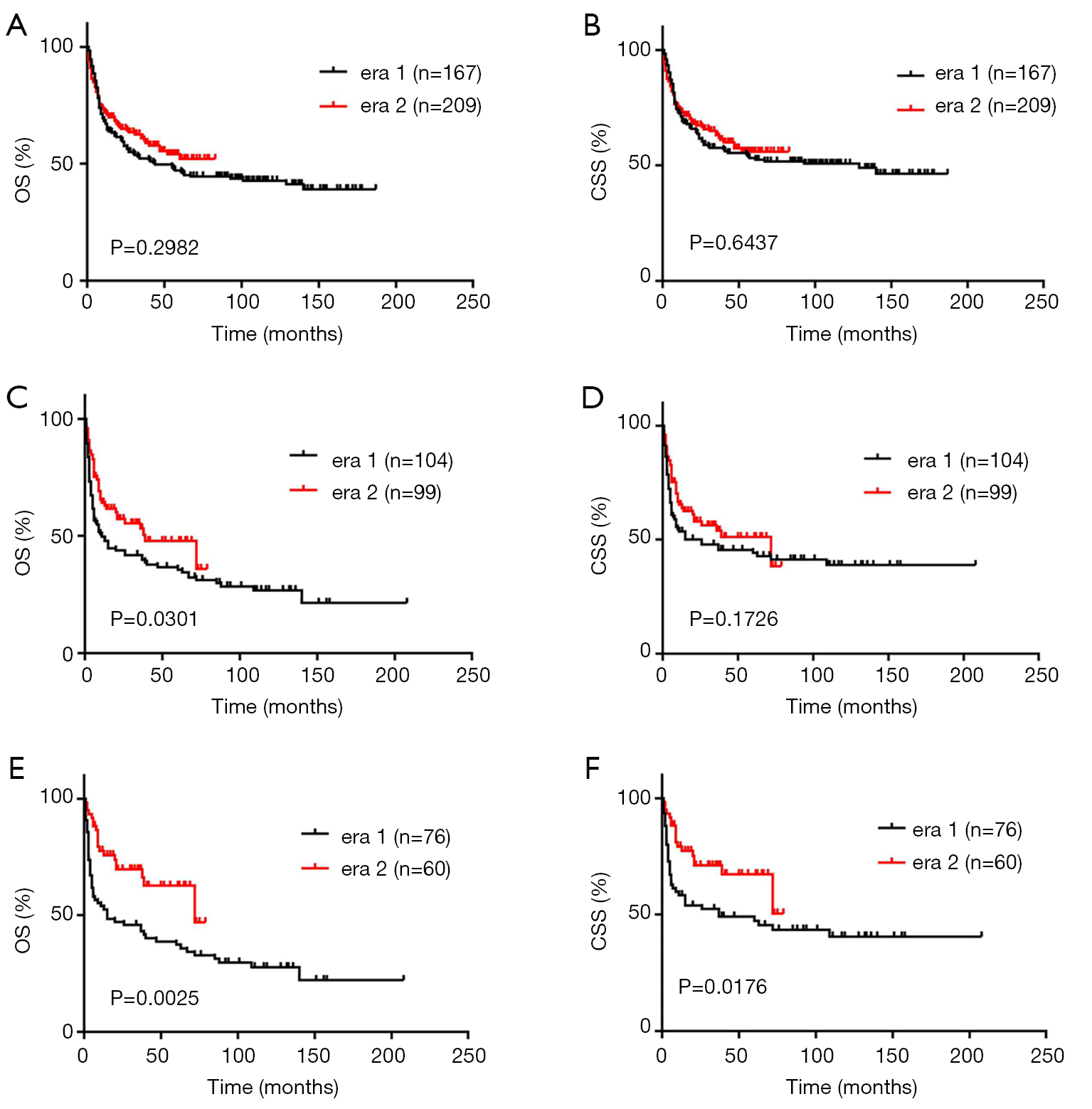 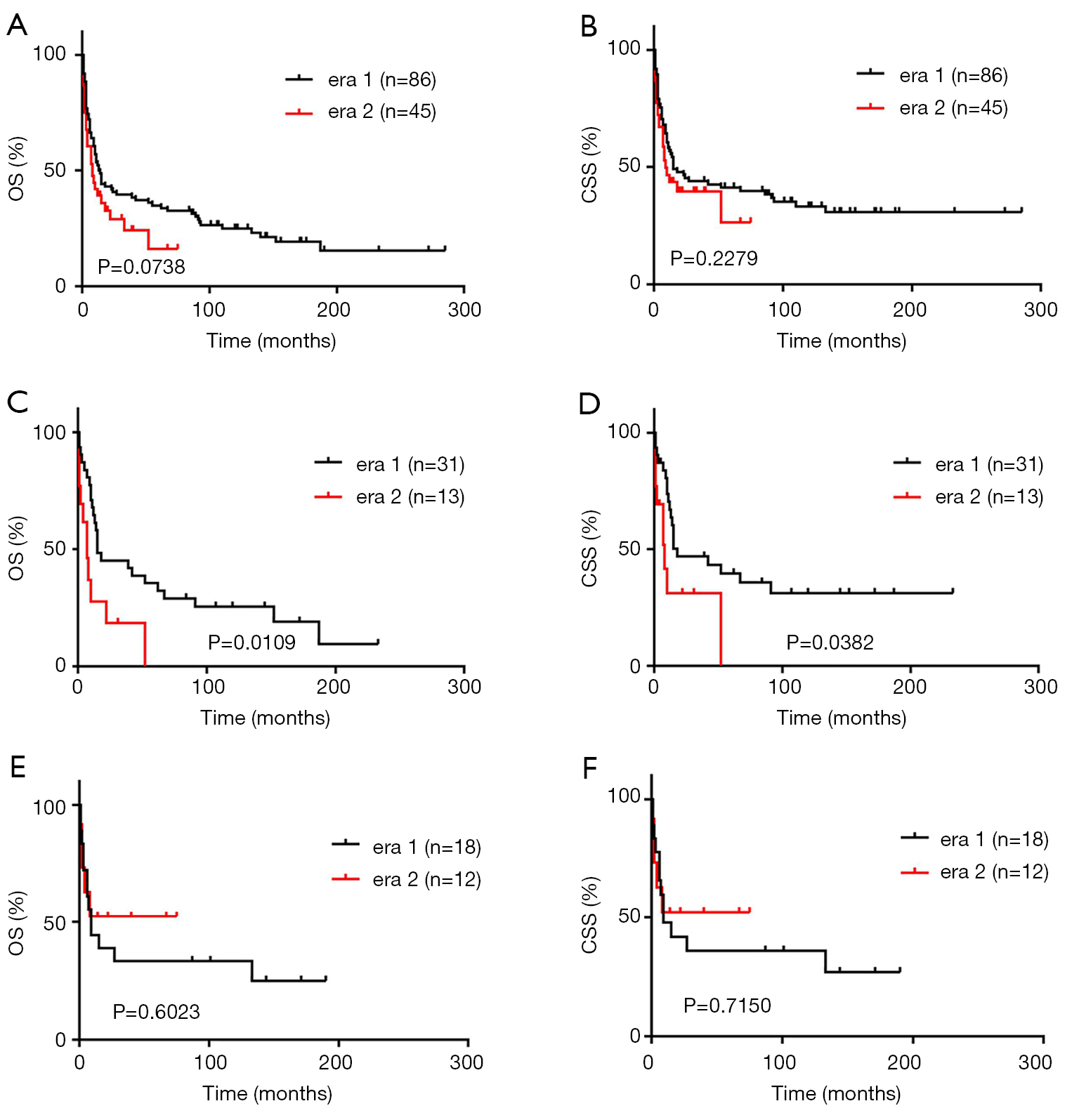 NKTCL is a rare and distinct subtype of non-Hodgkin lymphomas (NHLs) (11). Consistent with previous studies, extra-nasal NKTCLs had significantly worse outcomes than nasal NKTCLs (8,12,13). Although OS for nasal NKTCLs was improved in era 2 compared with era 1 (P=0.0244), there was no improvement in survival for extra-nasal NKTCLs, suggesting that cases of nasal origin rather than extra-nasal origin would benefit from the advent of new treatments for NKTCL, which is in accordance with findings from Yamaguchi et al. (8). Moreover, among cases of nasal NKTCL, there was improvement in OS from era 1 to era 2 in non-cavity cases but not in cavity cases, indicating that non-cavity cases are more likely to benefit from modern therapies.

In regard to Ann Arbor stage, patients with stage I/II disease have favorable outcomes, while those with stage III/IV disease have markedly worse outcomes, and require additional efforts to obtain durable remission (3). Previous studies have shown that modern asparaginase-based or peg-asparaginase-based regimens are associated with superior efficacy compared to conventional anthracycline-based regimens for the treatment of stage I/II disease (14,15). In the present study, nasal NKTCLs in the advanced stage showed inferior survival in both eras. Intriguingly, the OS was significantly improved from era 1 to era 2 in stage I/II nasal NKTCLs but not stage III/IV nasal NKTCLs, again consistent with the study by Yamaguchi et al. (8). Subsequently, when we restricted our analysis to stage I/II non-cavity NKTCLs, we noted remarkable improvements in OS and CSS in the new era, suggesting that stage I/II non-cavity nasal NKTCLs constitute a subgroup that benefit most from the use of the modern therapies.

Intriguingly, the case numbers in era 1 equaled those in era 2 according to the current selection criteria, despite a relatively shorter period of era 2. We are more inclined to attribute this to an improved diagnostic rate due to better identification of NKTCL. In addition, the nasal-to-extra-nasal ratio (81.55%:18.45%) was much higher than the reported rate found in an international T-cell lymphoma project study (68%:26%; 1990–2002) (12). This could be due to the increasing and widespread use of more sensitive imaging examinations including PET scans and MRI. Consistently, the frequency of extra-nasal NKTCLs was higher in era 2 than in era 1. Another possible explanation could be that patients in the SEER cohort are predominantly white. At present, there is limited data on whether clinicopathological features of NKTCLs vary by races or ethnicities. Large-scale study in various ethnicities is warranted to confirm whether our results could fully apply to other ethnic groups or not.

Our study has both clinical and biological implications. As the outcomes of patients with extra-nasal NKTCL have not improved in recent years, both the efficacy and tolerability of front-line treatments for extra-nasal NKTCLs need to be optimized. PD-1 and PD-L1 antibodies show promising therapeutic efficacy and are well tolerated in patients with relapsed/refractory NKTCL (16,17). Combinations of PD-1/PD-L1 inhibitors and less intensive asparaginase-based chemotherapy can be used to treat extra-nasal NKTCLs in the frontline setting. A prospective phase 2 trial (NCT04096690) is currently investigating a PD-1 inhibitor with peg-asparaginase as first-line treatment for advanced stage NKTCL. The prognosis of nasal cavity NKTCLs also needs to be improved, although this group of patients usually has relatively favorable outcomes. For stage I/II nasal cavity NKTCLs, combining PD-1 inhibitors and radiotherapy or chemoradiotherapy can be used to improve the outcomes of patients. A phase 3 randomized trial (NCT04365036) is currently evaluating the addition of a PD-1 inhibitor to chemoradiotherapy in newly-diagnosed early-stage NKTCLs. The differences in prognosis among NKTCLs from different sites suggest that NKTCLs from different anatomical sites may have distinct biological characteristics. Although several studies have explored the genomic landscape of NKTCLs (18-21), the differences in genetic aberrations among NKTCLs from different sites have not been studied. Further studies including more cases are warranted to identify the biological differences among NKTCLs from different sites.

Funding: This work was supported by the National Natural Science Foundation of China (Grant No. 81720108002), National Major Science and Technology Projects of China (Grant No. 2018ZX09734007), and Translational Research Grant of NCRCH (Grant No. 2020ZKZB01). The funding body played no role in the design of the study and collection, analysis, and interpretation of data and in writing the manuscript.

Reporting Checklist: The authors have completed the STROBE reporting checklist. Available at http://dx.doi.org/10.21037/atm-21-1748

Conflicts of Interest: All authors have completed the ICMJE uniform disclosure form (available at http://dx.doi.org/10.21037/atm-21-1748). The authors have no conflicts of interest to declare.

Ethical Statement: The authors are accountable for all aspects of the work in ensuring that questions related to the accuracy or integrity of any part of the work are appropriately investigated and resolved. All of the SEER data are de-identified and analysis of the data does not require institutional review board approval or informed consent from the patients. The study was conducted in accordance with the Declaration of Helsinki (as revised in 2013).