Stroke is a leading cause of death and long-term disability worldwide (1). Approximately 15% to 20% of all ischemic strokes are attributable to artery-to-artery thromboembolism caused by carotid atherosclerotic disease (2). Currently, guidelines for prevention on stroke in patients with carotid atherosclerosis are based on quantification of carotid stenosis degree (3,4). However, a growing amount of evidence has shown that vulnerable carotid plaques play an important role in the occurrence of stroke, independent of the severity of carotid stenosis (5,6). This paradigm shift of assessment of the occurrence of ischemic events provides a new strategy for primary and secondary stroke prevention (7).

Carotid ultrasound is the primary noninvasive technique for diagnosing and following up with atherosclerotic carotid disease (8). Conventional ultrasound can evaluate plaque morphology, size, echogenicity, and hemodynamic changes and provide an important basis for clinical decisions. Despite the recent development of several ultrasound techniques, none of them are currently used in clinical routines for carotid plaque screening (9,10). These new techniques, such as shear wave elastography (SWE) (11), enable the assessment of plaque stiffness and may add a new possible surrogate parameter for symptomatic atherosclerotic plaques.

At present, risk stratification of patients with asymptomatic carotid stenosis is still controversial for carotid revascularization. Improved approaches to identify patients at the highest risk of ischemic events may refine clinical decisions, allowing treatment to be more precisely targeted towards patients who are most likely to benefit. The aim of this study was to develop a risk score scale of multiparameter ultrasound, including plaque stiffness, surface morphology and carotid stenosis degree, for the identification of patients at high risk of stroke and to investigate the discrimination performance of the scale. We present the following article in accordance with the STARD reporting checklist (available at http://dx.doi.org/10.21037/atm-20-8205).

A systematic description of the patient selection, ultrasound evaluation, and clinical information was previously described (12). Patients with >50% proximal internal carotid artery lumen narrowing confirmed by carotid ultrasound were consecutively included at Beijing Tiantan Hospital from December 2018 to December 2019. The exclusion criteria were patients showed a definitive cardioembolic cause of stroke or an unusual etiology according to the TOAST standard (13); unable to cooperate to complete ultrasound evaluation; greater than 70% ipsilateral intracranial artery stenosis confirmed by cerebrovascular imaging; non-atherosclerotic carotid artery stenosis; and poor-quality of ultrasound image. All participants underwent a detailed demographic characteristics assessment by a well-trained study physician. All patients underwent multimode ultrasound evaluation, including B-mode ultrasound, color Doppler ultrasound, spectral Doppler ultrasound, and SWE, on the bilateral carotid arteries before study inclusion. The study was conducted in accordance with the Declaration of Helsinki (as revised in 2013). Institutional Review Board approval was obtained to perform this study (IRB No. KY2019-113-01). Informed consent was obtained from all patients.

Symptomatic group was defined as patients who had already experienced ipsilateral non-cardioembolic ischemic cerebrovascular events including acute stroke, transient ischemic attack (TIA), and amaurosis fugax within the past 30 days before study inclusion. Asymptomatic group was defined as patients who had showed no symptoms and signs of ischemic events within the past 6 months. All clinical events were collected and confirmed by a well-trained neurologist who was blinded to the ultrasound results.

Based on the peak-systolic and end-diastolic velocities, internal carotid artery stenosis severity was graded as <50%, 50–69% and 70–99% (14). The definition of carotid atherosclerosis plaque was a focal structure thickness greater than 1.5 mm or a distinct area of carotid intima-media thickness (CIMT) ≥50% greater than the surrounding vessel wall. Plaque size (area), echogenicity, surface morphology (smooth, irregular and ulceration), and carotid stenosis severity were collected, respectively. Plaque risk biomarkers were evaluated in longitudinal planes according to clinical consensus (15,16). When the ultrasound image showed the thickest plaque, the CIMT (including the plaque) was taken as the maximal internal carotid plaque thickness (17). And then, a plaque was manually depicted and measured as the plaque size. Plaque echogenicity characteristics were defined according to greyscale ultrasound as follows: uniformly hypoechoic, predominantly hypoechoic, predominantly hyperechoic, and uniformly hyperechoic (18). Plaque ulceration was measured as a defect, at least 2 mm × 2 mm in depth and width, in the plaque with the basal margin echo weaker than the surrounding plaque surface, and on color Doppler ultrasound, the defect was filled with blood flow signals (19).

Plaque elasticity assessment was performed immediately after routine ultrasound evaluation by using the identical ultrasound system to gain a double-view display of the interest plaque in the elastographic diagram and quality control diagram. The probe was placed on the plaque without pressure to keep the image stable to allow measurements of plaque elasticity. Plaques elastography measurements were performed in the maximum longitudinal section for 3 times, and the mean of three independent measurements was used for further analyses. Plaque elasticity was reflected in real-time by means of a chromaticity diagram within the elastographic rectangular sampling frame. The speed of propagation of the shear waves is dependent on the local elastic modulus of the tissue. The shear wave range was set from 0 to 10 m/s. The elastographic-specific region of interest (ROI) frame was modified to contain the whole plaque. Plaque elasticity measurement was depicted around the entire plaque, and the quantitative elasticity of the whole plaque was recorded in m/s. Young’s modulus (YM, kPa) is typically estimated using the equation YM = 3ρc2, where ρ is the density of specific organizations, and c is the shear wave velocity. The quality control diagram displays the propagation of the shear wave as wave-forward lines. When the propagation lines are parallel to each other, the measurement may be more reliable; if the lines are distorted or lacking, the measurement needs to be repeated. A sample (10%) of the SWE findings was selected to assess the interobserver agreement of the two sonographers using the intraclass correlation coefficient (ICC). For this analysis, the elasticity of the selected plaques for each image was measured by the two observers.

A well-trained research neurologist who was blinded to the imaging results collected the demographic characteristic information that may be associated with ischemic cerebrovascular events from all patients. A standard case report form was used to record information, including age, sex, status of smoking and drinking, history of diseases, and medication use.

Differences in baseline clinical variables between the symptomatic group and asymptomatic group were compared using nonparametric tests for continuous variables and χ2 tests for categorical variables. Carotid plaque stiffness was divided into four groups according to the elasticity quartiles. To facilitate operation, the stiffness (YM) was rounded to the closest integer to generate the score. Binary logistic regression was employed to evaluate the contribution of the parameters to the ischemic events. We performed the univariable logistic regression analysis and included variables with univariable P<0.05 in the multivariable logistic regression analysis. Based on the corresponding β coefficient on multivariable logistic regression, we derived the USR score. The sum of the risk parameter scores was added as the overall score. The discrimination ability of the models to identify symptomatic plaque was assessed using the C statistic. For internal validation, we used 5-fold cross-validation with 20 iterations in the model derivation datasets. 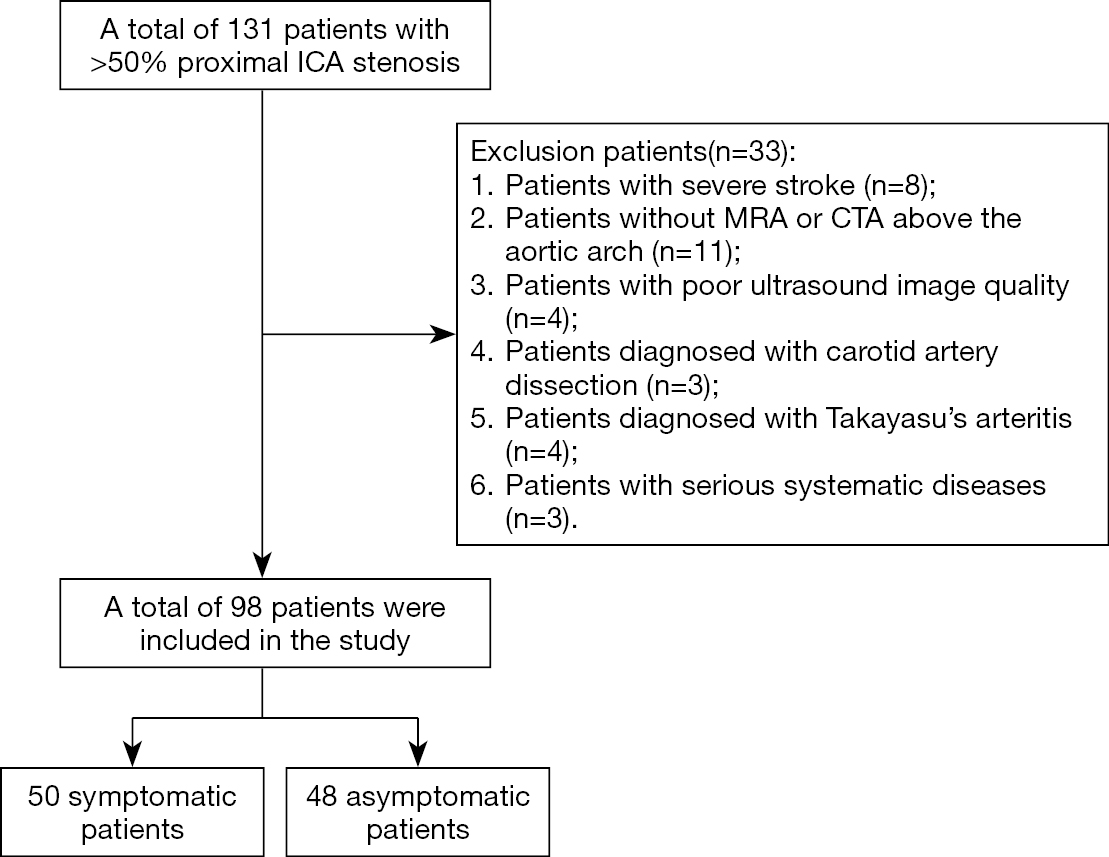 Figure 1 Flow chart of the study.

The demographic characteristics of the available patients in the two groups (symptomatic and asymptomatic groups) are shown in Table 1. Briefly, the mean age of the included patients was 65.6 years, and 76.5% were men. The two groups did not differ in age, sex, smoking and drinking history, diabetes mellitus, and hypertension. Usage of medications also did not show significant differences between the two groups. 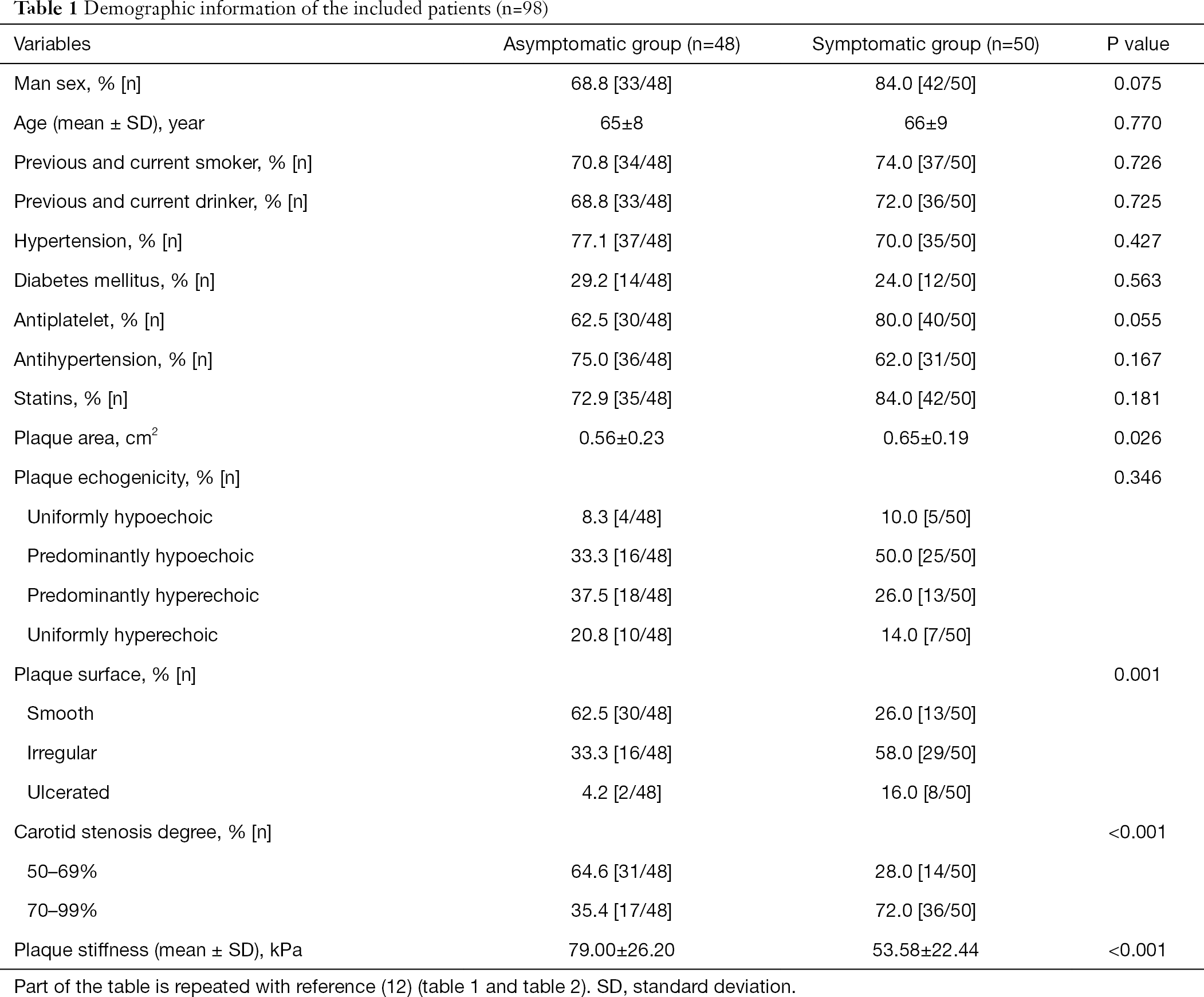 Figure 2 Example of a multiparameter ultrasound study. A 68-year-old man with >70% asymptomatic internal carotid stenosis. (A) A predominantly hypoechoic plaque located at the posterior wall of the right proximal internal carotid artery. (B) Shear wave elastography (SWE) examination of the plaque. SWE showed that the Young’s modulus value of the plaque was 46.3 kPa, and the quality control map showed that the sampling was performed correctly. 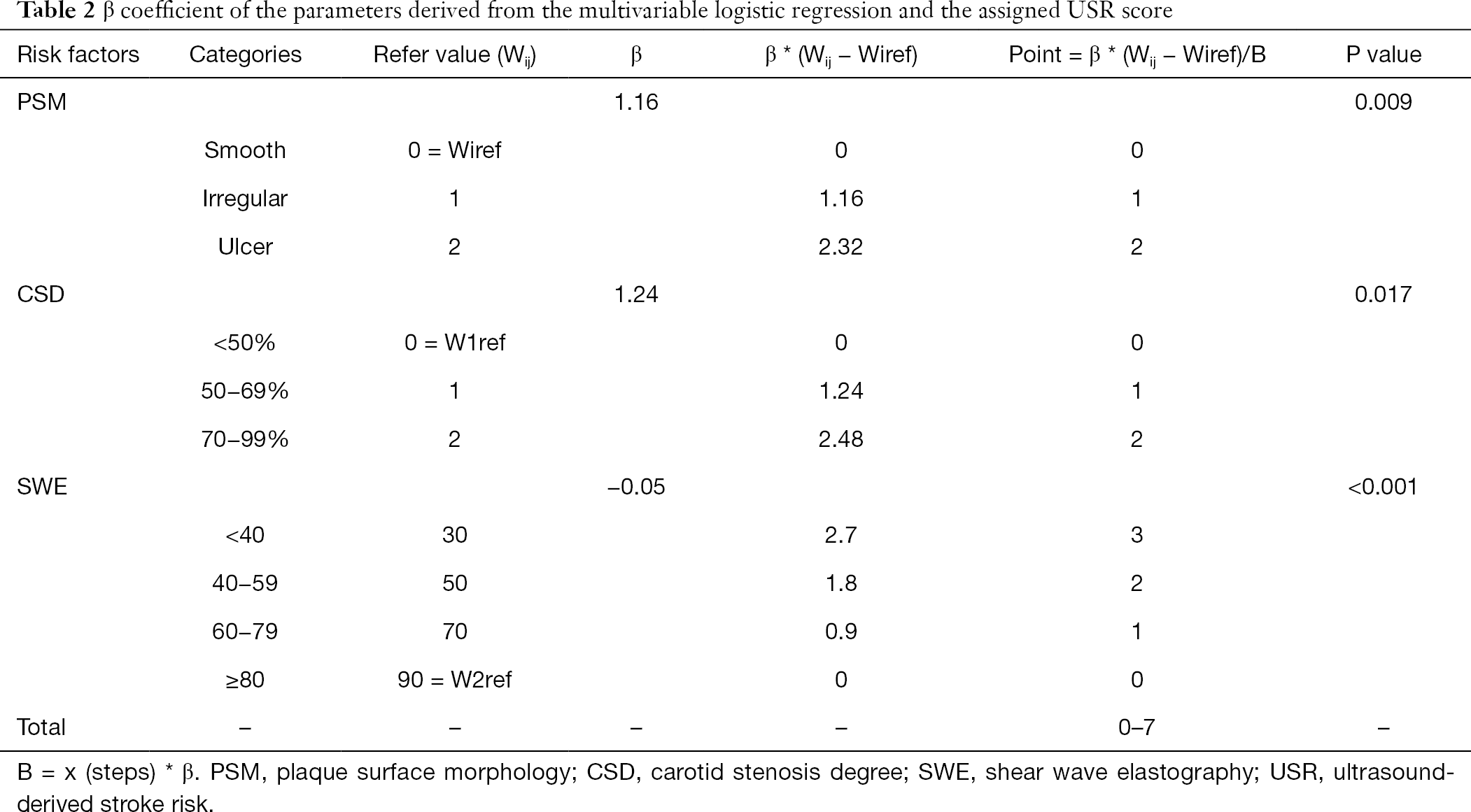 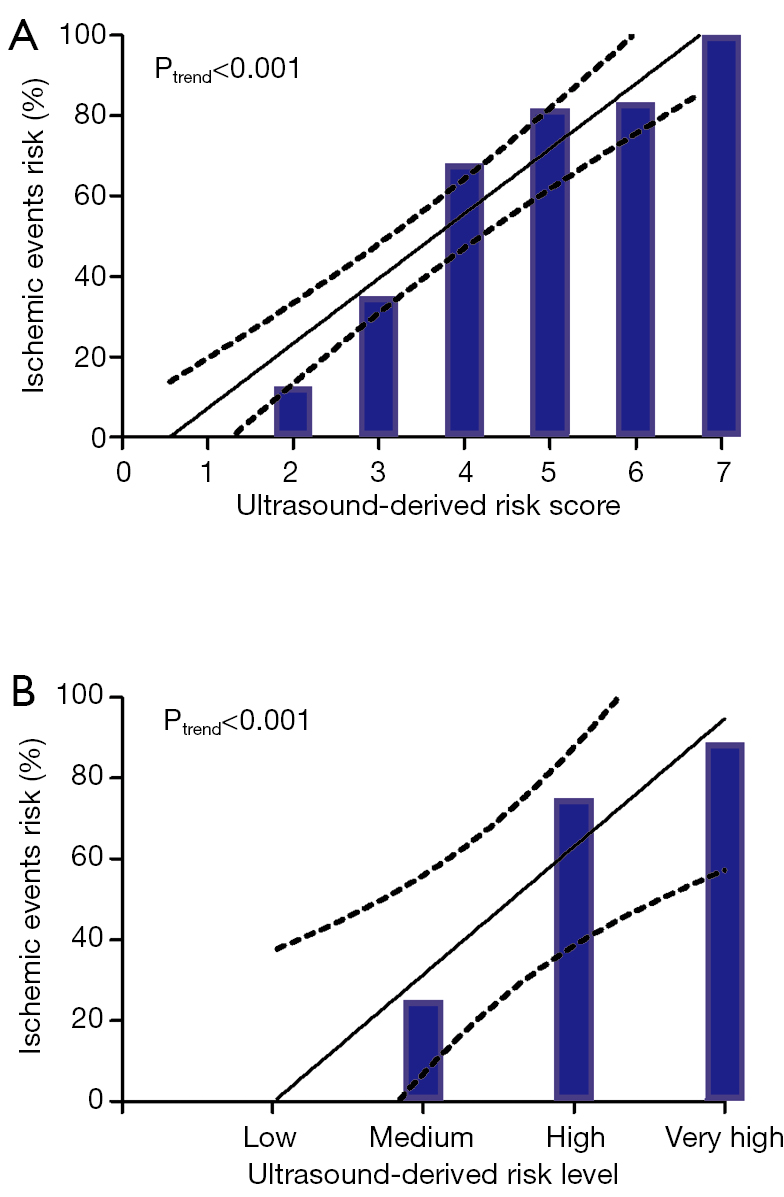 Figure 3 The relationship between the USR score (A), USR level (B) and ischemic event risk. USR, ultrasound-derived stroke risk.

Diagnostic performance of the USR score 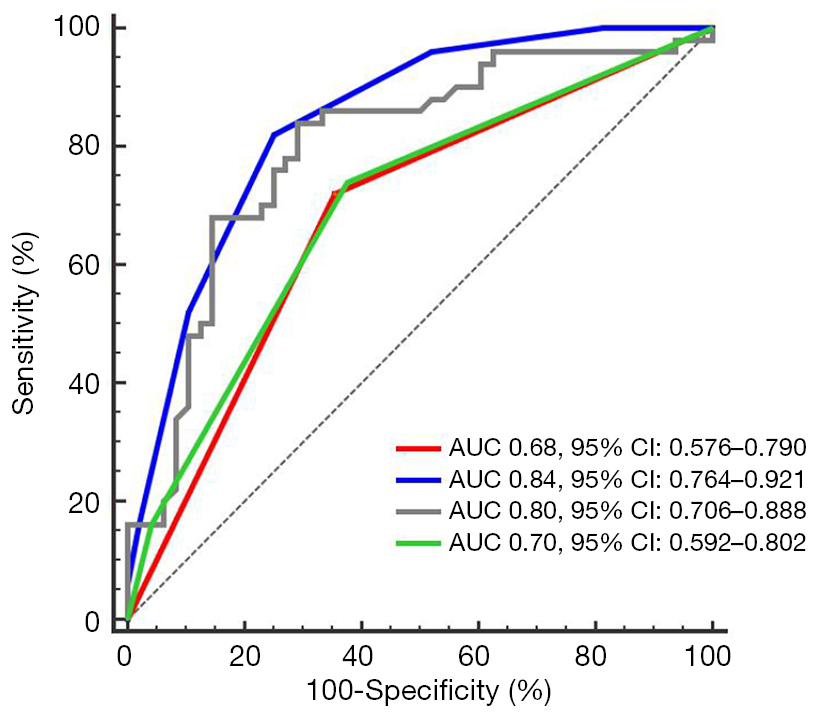 Finally, the USR score has a desirable performance in analyses restricted to patients with moderate carotid stenosis, and the identification of patients at the highest risk of ischemic events is most likely to be clinically beneficial when considering selection for carotid revascularization.

Intraplaque hemorrhage, thin fibrous cap, large lipid core, neovascularization, and inflammation are all risk biomarkers of vulnerable plaque (20). Multiparameter ultrasound could help stroke risk stratification and identify patients who might require carotid intervention and who might not.

SWE is a novel noninvasive technique developed to quantify tissue elasticity and to differentiate lesion nature (23). Ramnarine et al. (24) reported that there were significant differences in plaque YM between symptomatic patients and asymptomatic patients (62 vs. 88 kPa; P=0.01). In our study, symptomatic plaques had a significantly lower mean YM than the asymptomatic plaques (53.6 vs. 79 kPa; P<0.001). The presence of intraplaque hemorrhage and lipid core at histology was associated with a significantly lower YM (25). A recent study showed a high concordance of 81.4% between SWE and computed tomography angiography (CTA) in evaluating the correlation between “soft plaques” and the presence of a lipid core (26). However, CTA is a complex and minimally invasive imaging modality that cannot be used as a tool to screen plaque vulnerability in asymptomatic patients.

In clinical practice, there is an overlap in YM values between stable and unstable plaques; therefore, it is insufficient to identify plaque characteristics that only depend on SWE. To our knowledge, no studies have systematically investigated the clinical utility of plaque surface morphology and plaque elasticity combined with carotid stenosis to identify patients at high risk of stroke.

Some limitations of the study should be acknowledged. First, there was no ultrasound imaging of patients with carotid lesions prior to ischemic event occurrence. Second, in some subgroup analyses, as relatively few patients had scores of 1 or 7, the confidence interval is wide. Larger sample studies are needed to improve the performance of risk estimation of the score. Third, SWE assessment is affected by the pulse motion of the carotid arteries, and the measurement of plaque YM may lead to errors. Fourth, all included patients had more than 50% proximal carotid stenosis; thus, the possible culprit plaques that caused stroke independent of lumen stenosis may have been missed in these patients. Fifth, the exclusion of plaques with poor image quality may lead to a selection bias. In addition, unmeasured confounding factors by variables not available in our study may inevitable. Finally, we validated the USR score scale only by internal samples, and a large-scale study of external validation is also needed in the future.

The USR score is a grading scale that assesses the risk of ischemic cerebrovascular events in patients with proximal carotid stenosis with preferable discrimination performance. A selection algorithm that combines information about plaque surface morphology, plaque elasticity and carotid stenosis might be more useful for patients who had less benefit from revascularization when clinical decisions only depend on lumen narrowing. Large-scale external validation with long-term follow-up in other studies will be needed to prove the predictive value.

Funding: This research was supported by the National Natural Science Foundation of China (ID 8173000716).

Reporting Checklist: The authors have completed the STARD reporting checklist. Available at http://dx.doi.org/10.21037/atm-20-8205

Conﬂicts of Interest: All authors have completed the ICMJE uniform disclosure form (available at http://dx.doi.org/10.21037/atm-20-8205). The authors have no conflicts of interest to declare.

Ethical Statement: The authors are accountable for all aspects of the work in ensuring that questions related to the accuracy or integrity of any part of the work are appropriately investigated and resolved. The study was conducted in accordance with the Declaration of Helsinki (as revised in 2013). Institutional Review Board approval was obtained to perform this study (IRB No. KY2019-113-01). Informed consent was obtained from all patients.