Pacemakers are among the most common electronic medical devices implanted to aid in the restoration of heart function in clinical practice. Using a pulse generator to provide battery-powered electrical pulses, pacemakers excite and contract the heart by stimulating the heart muscle through electrodes. They are applied in the treatment of some cardiac dysfunctions caused by arrhythmias and heart failure (1-3). At present, implanted medical devices such as pacemakers are used to maintain normal vital signs in millions of patients worldwide (4). With the wide application of pacemakers, many complications related to batteries and implanted devices of pacemakers can also arise (5,6). Furthermore, routine battery replacement to ensure adequate power supply is inavoidable, but this greatly increases the health risks for patients. Therefore, the development of self-powered pacemakers has become the main priority of pacemaker-related research.

Therefore, we designed a new type of pacemaker model with self-energized characteristics. By using an implantable piezoelectric energy collector, the kinetic energy of the heart was collected and supplied to the pacemaker chip to attain an effective pacing treatment, and self-functional pacing was achieved by stimulating the cardiac tissue with a pacing electrode. Piezoelectric energy harvesting is the key to this new self-powered cardiac pacemaker, and is also the main focus of verification in this paper.

We present the following article in accordance with the ARRIVE reporting checklist (available at http://dx.doi.org/10.21037/atm-21-2073). 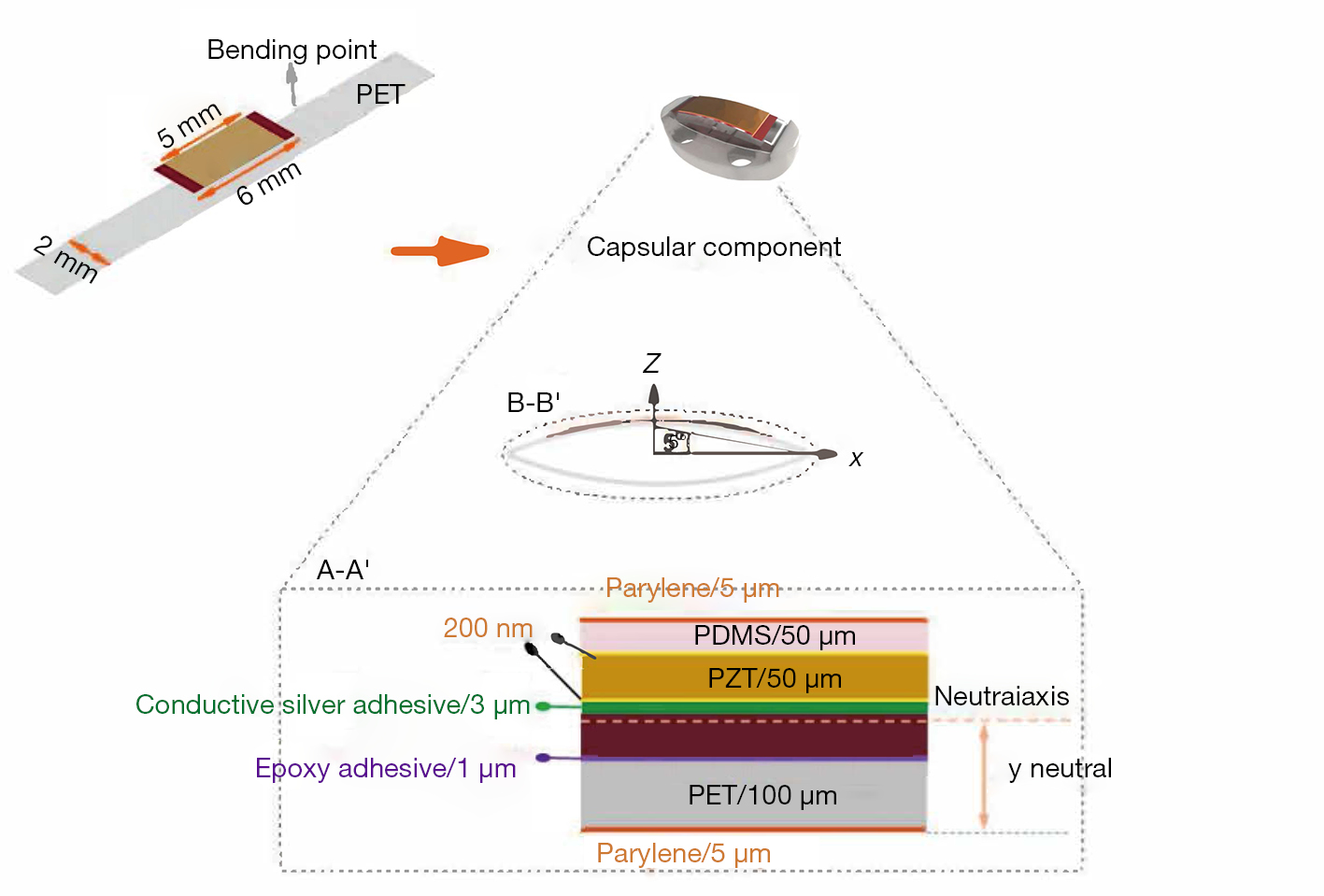 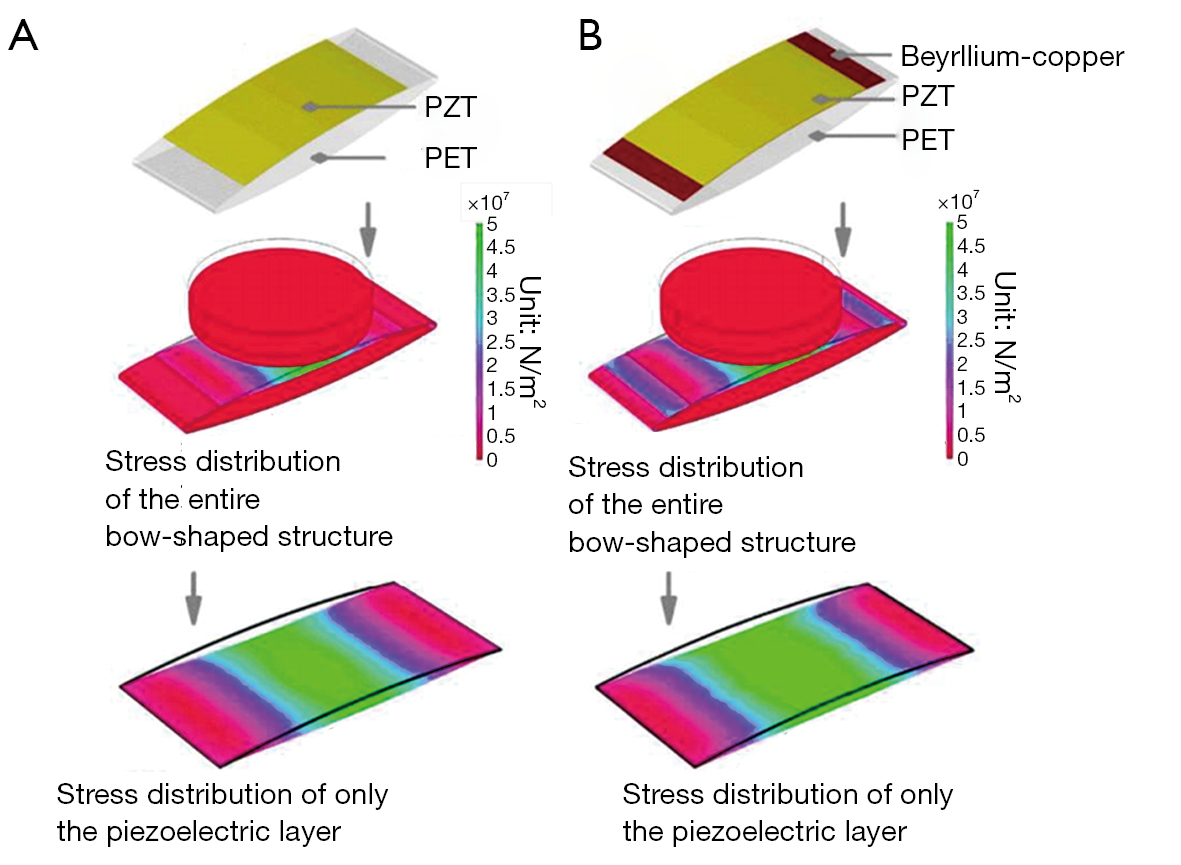 Figure 3 shows the detailed construction process of the piezoelectric vibration energy collector. The flexible buckling piezoelectric laminated layer comprises 3 layers: the piezoelectric layer, metal, and polymer. Firstly, the PMM-Pt [(72%) Pb (MGI/3NB2/3)O3 − (28%) PbTiO3, 300 µm, TrSx2A, TrS Ceramics] was graphed into rectangular blocks of 10×20×0.3 mm3 using ultraviolet (UV) laser cutting at 800 W (Figure 3A). It was then bonded to the polished bronze substrate (10×25×0.05 mm3) with epoxy conductive silver adhesive at 100 °C, and then subjected to 24 hours of vacuum hot-pressing. Next, a mechanical grinding method was employed to reduce the PMN-PT sheet to a thickness of 50 µm. Under the condition of air pressure 1.5 Pa and power 100 W, Cr/Au (−200 nm) film, as the top electrode, was deposited by magnetic sputtering (TRP-450, Sky Technology Development Co., Ltd., Shenyang, China). Polarization of the PMN-Pt piezoelectric film was performed by applying a 3.5 kV/cm electric field at 20 °C for 10 minutes with a high voltage electrode (C2911Bi Nanjing Owen Instrument Technology Co., Ltd., Nanjing, China). The beryllium copper foil was bonded to the central position of the 10×60×0.1 mm3 polyethylene terephthalate (PET) film with an epoxy resin binder (Figure 3B). Leads were used to connect the gold electrode at the top with the Copper electrode at the bottom through a silver epoxy conductive adhesive. Finally, the flexural structure was bent and fixed using PET with a string length of 30 mm. 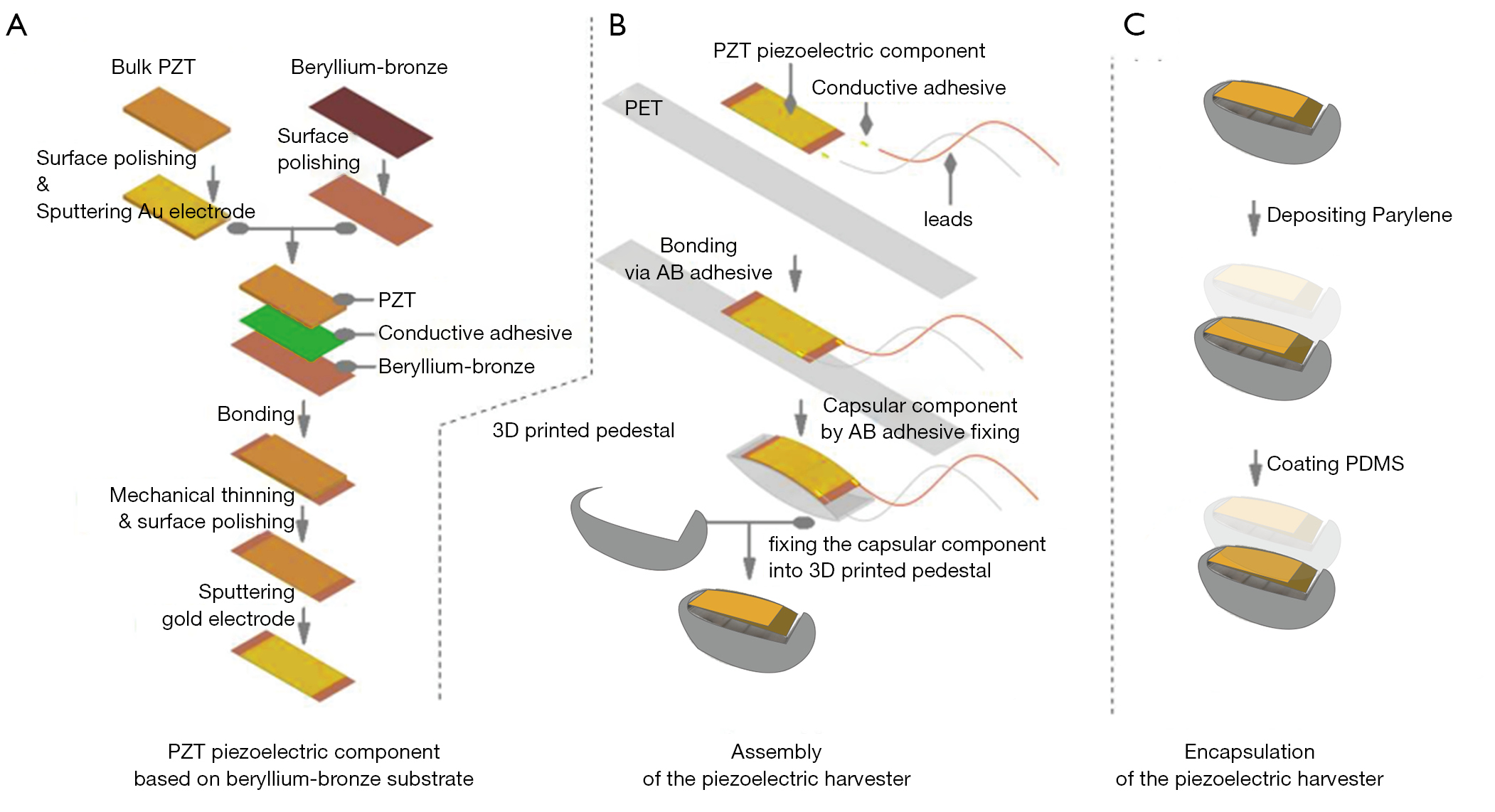 To prevent the device from slipping after implantation, the piezoelectric composite layer element was fixed with an auxiliary base, the concave of which was designed to match the convex surface of the heart and was made using three-dimensional (3D) printing technology and polylactic acid (PLA) material with high biocompatibility. Figure 3C shows the core/shell packaging process used to isolate the device from body fluids and tissues, for which leakproof biocompatible materials including polydimethylsiloxane (PDMS) and polyparaxylene C were used. PDMS (Sylgard184, Downing Corning, USA) was coated on the surface of the piezoelectric energy collector and distributed as uniformly as possible (≈40 µm) by airflow. Then, the inner gas was removed into a vacuum chamber, and finally cured at 80 °C for 1 hour to form the PDMS encapsulation layer. As PDMS is vulnerable to damage, to further improve the reliability and leakproof performance of the PDMS layer, a polyparylene C (parylene C) film with a thickness of 5 µm was laid on the outer surface as a second packaging layer to ensure the device was electrically insulated and packaged reliably.

SPSS 24.0 software was used for statistical analysis. The experimental data were expressed as mean ± standard deviation (). The independent sample t-test and one-way analysis of variance (ANOVA) were applied, and the homogeneity of variance test was performed at the same time. When the variance was homogeneous, the LSD statistical method was used for comparisons between groups. P<0.05 indicated a significant difference.

The open-circuit voltage and short-circuit current were under the peak loading forces of 0.5 and 0.6 N at the frequencies of 1, 2, and 3 Hz.

In vitro test results of the piezoelectric vibration energy harvester

In vivo experiment of the piezoelectric energy collector

All animal experiments were approved by the Naval Military Medical University (Second Military Medical University) Animal Care Center (CHEC2019-103), following all guidelines, regulations, legal, and ethical standards as required. The in vivo experiment was performed in female Sprague Dawley (SD) rats (age: 6–7 weeks, weight: 170–180 g). Three rats were in one cage. There are 6 cages. Before surgery, the rats were fasted for 12 hours. Anesthesia was maintained with Rodent Anesthesia Machine and isoflurane at a flow rate of 0.7 L/min. After being anesthetized, the rats were fixed on the operating table, with the head of the table maintained at 60 degrees. The rats’ chest hair was removed with depilation cream, and cold light was applied to the chest. The rats were disinfected 3 times with iodine volt and covered with surgical towel.

The subcutaneous fascia, pectoralis major, and serratus anterior were separated by a longitudinal incision 2–3 mm from the left edge of the sternum, to expose the 3rd and 4th ribs. The intercostal muscles of the 3rd and 4th ribs were obtusely separated, and then these ribs were gently spread. The pleura was cut with ophthalmic scissors, with the left lung being carefully protected. Then, the pericardium was cut, and the chest was opened with eyelid openers to fully expose the bottom of the heart. A preprepared UV-sterilized flexible flexion piezoelectric vibratory energy collector was then quickly implanted and fixed in the pericardium, facing the apex of the heart. The blood around the chest was cleaned with a cotton swab and observed for bleeding spots. After it had been confirmed that there was no bleeding, the skin was sutured with thread 0 and disinfected with iodine volt. Finally, the anesthetic machine was removed, and the rats were placed in a cage. The surgical method is shown in Figure 5. 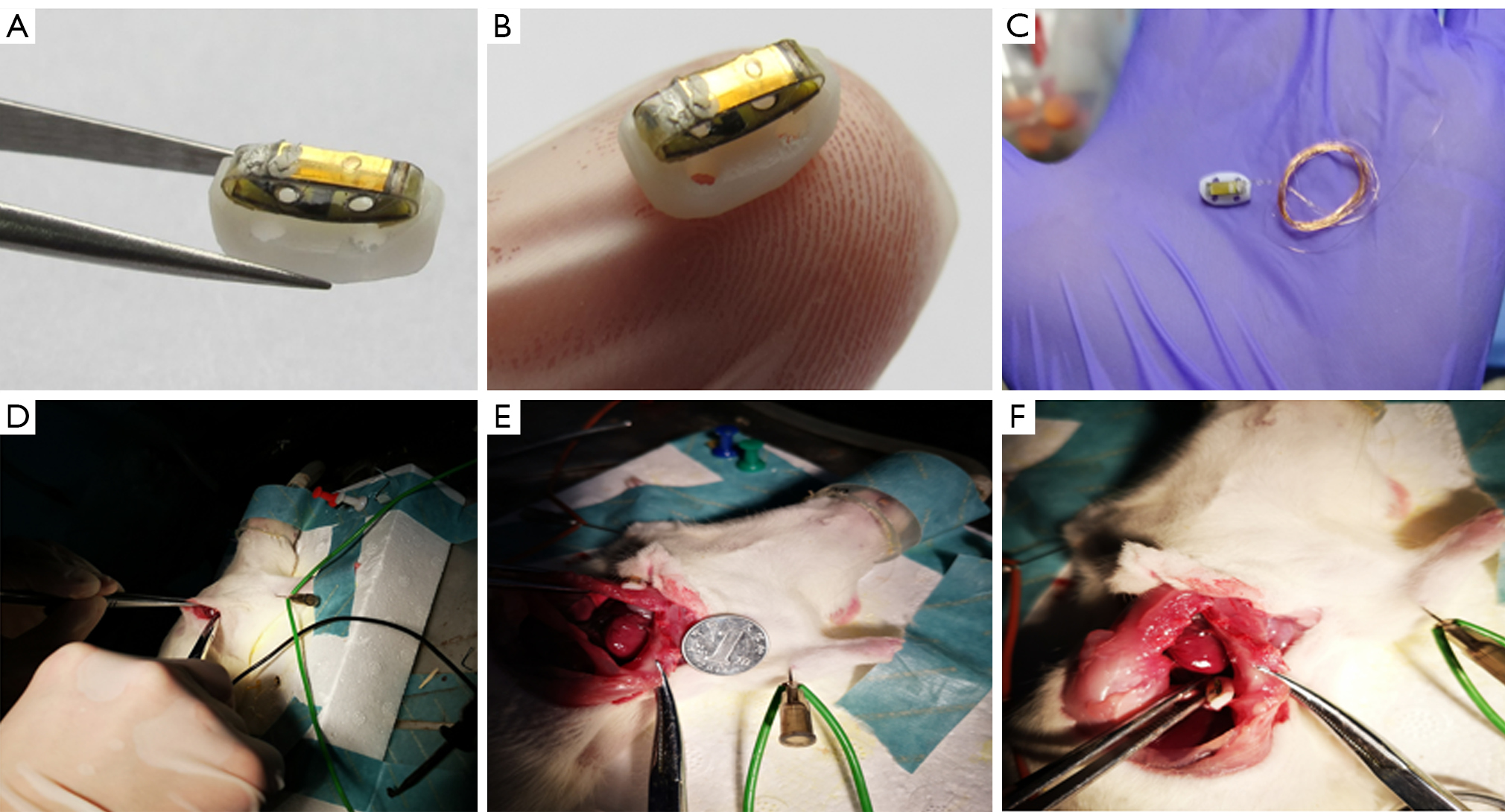 In vivo test results of the piezoelectric vibration energy harvester 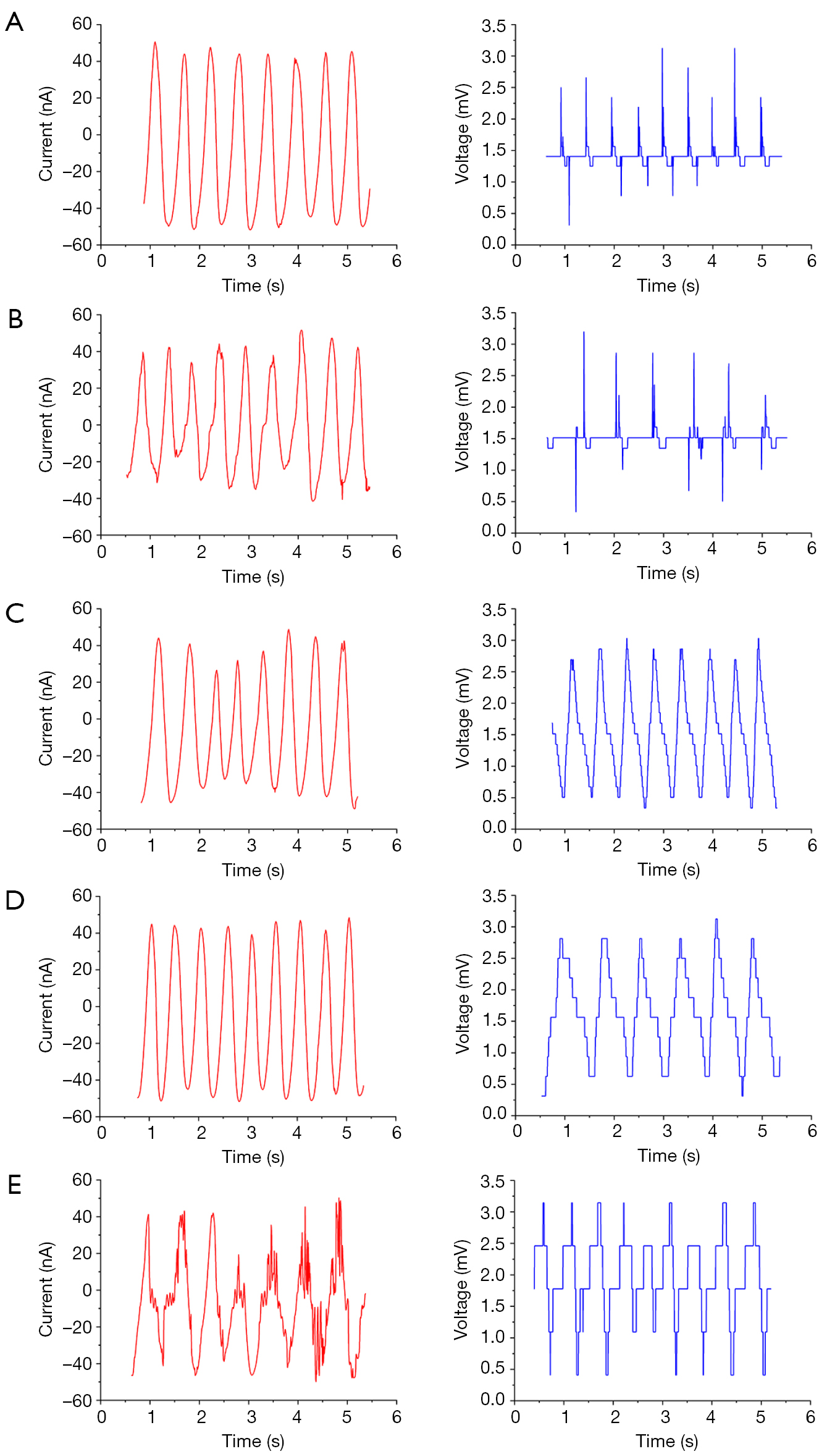 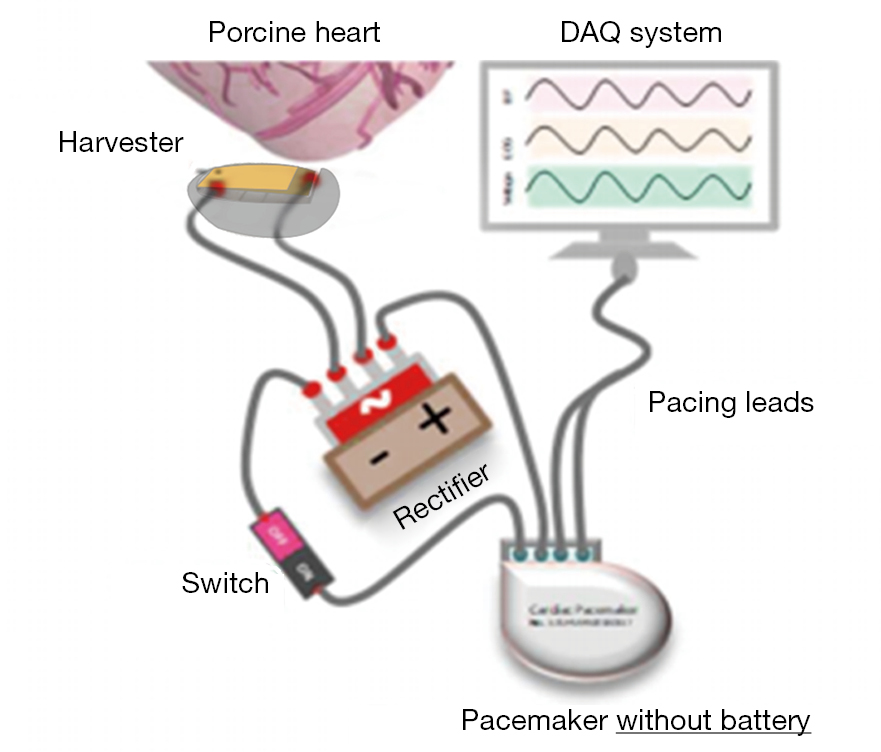 Based on the heart state and the internal environment of rats, a piezoelectric vibration energy collector was designed to collect the kinetic energy of the heart. The preparation and packaging processes, and the implantation procedure were carried out, and the mechanical and electrical reliability of the device was evaluated.

After connecting the output electricity to batteries removed from commercial heart pacemakers, we obtained the required electrical pulse signals and verified that the heart kinetic energy collected by the implanted piezoelectric vibratory energy collector was sufficient to maintain the normal level of work of a commercial pacemaker, thus showing the feasibility of using implantation-based piezoelectric energy harvesting technology in the operation of self-powered cardiac pacemakers.

Herein, we have presented an epicardial pacing strategy in which a pacemaker is driven by an implanted piezoelectric vibratory energy collector, which generates electrical pulses, and the cardiac tissue is directly stimulated through the epicardial membrane to achieve a pacing effect. Our results prove the feasibility of using this in-situ epicardial pacing strategy. This research will contribute to the promotion of the design and development of cardiac pacemakers.

Funding: This work was supported by the National Natural Science Foundation of China (grant no. 81470592).

Reporting Checklist: The authors have completed the ARRIVE reporting checklist. Available at http://dx.doi.org/10.21037/atm-21-2073

Conflicts of Interest: All authors have completed the ICMJE uniform disclosure form (available at http://dx.doi.org/10.21037/atm-21-2073). The authors have no conflicts of interest to declare.

Ethical Statement: The authors are accountable for all aspects of the work in ensuring that questions related to the accuracy or integrity of any part of the work are appropriately investigated and resolved. The research experiments conducted in this article involving animals were approved by the Ethical Committee and responsible authorities of Naval Military Medical University (No. CHEC2019-103) following all guidelines, regulations, legal, and ethical standards as required.