Over the last two decades, significant advances in critical care and infection control have led to improved survival rates (6,7). Recent studies indicate that further improvements in the survival rates of lung cancer patients treated in ICU may be expected (5,8). Moreover, the introduction of new treatments, such as targeting agents or immunotherapy have also contributed to improved survival in patients with advanced lung cancer (9,10). As a result of the complex nature of the disease and the growing number of treatment options for these patients, it has become difficult to apply past treatment decision recommendations (11) to the modern critical care of patients with lung cancer. To complicate matters further, in previous studies, the criteria for treatment-limitation decisions were different for each center, and the severity of patients admitted into ICU was influenced by the availability of beds in ICU at each hospital (12). Most studies have reported outcomes for all lung cancer patients, including surgical patients, whereas a few have focused only on advanced cancer patients who do not have surgical treatment options. There is therefore a need for unbiased data on outcomes for all-stage critically ill patients with lung cancer in ICUs in order to assist physicians and patients in making more informed and considered decisions regarding ICU treatment.

We hypothesized that the overall prognosis of patients with lung cancer in ICU was influenced by the cancer treatment the patient actually received, rather than by the cancer stage at the time of diagnosis. We aimed to investigate the outcomes of each clinical group by classifying critically ill patients with lung cancer from a national population-based data according to their lung cancer treatment options. We present the following article in accordance with the STROBE reporting checklist (available at http://dx.doi.org/10.21037/atm-21-298).

This is a retrospective observational cohort study. This study analyzed the claims data from the Health Insurance Review and Assessment Service (HIRA) between January 1, 2007 and March 31, 2016. All Koreans are covered by the National Health Insurance (NHI) and claims data submitted by the NHI are reviewed by the HIRA. These claims data include information regarding patients’ diagnoses, treatment, procedures, surgical history, and prescription drugs.

This study investigated all patients aged >18 years, examined by chest CT for any reason between January 2007 to December 2011. From this cohort, we identified those patients with lung cancer using codes from their ICU services [i.e., code C34x.x from a modified version of the International Classification of Diseases 10th Revision (ICD-10)]. The study enrolled patients newly diagnosed lung cancer between 2008 and 2011 and who were followed up before March 31, 2016. We excluded patients who: (I) were >100 years old, (II) had any claims related to code C34x.x prior to Jan 2008, (III) had a lung cancer diagnosis after the date of admission to the ICU, (IV) stayed in the ICU less than 24 h.

We identified the first ICU admission after lung cancer diagnosis for each patient using codes from the ICU services (AJ001-AJ590900). Patients who stayed in ICU for >24 h and those admitted for routine postoperative care were classified as surgical ICU. Radiation therapy for lung cancer was limited to radiation therapy administered to the chest area. Comorbidities were identified if the claims data existed from six months before the index diagnosed as lung cancer. Comorbidity diagnoses were identified using ICD-10 codes and where patients had underlying disease, comorbidity was represented by the Charlson Comorbidity index. Procedures of interest such as mechanical ventilation, hemodialysis, and cardiopulmonary resuscitation (CPR) were defined using procedural claim codes as detailed in a previous study (13). We identified the use of chemotoxic drugs using the Korean drug and anatomical therapeutic chemical codes.

The study was conducted in accordance with the Declaration of Helsinki (as revised in 2013). The study was approved Kangwon National University Hospital Institutional Review Board (B-2018-02-002) and individual consent for this retrospective analysis was waived.

All statistical analyses were performed with reference to guidelines for the European Journal of Cardio-Thoracic Surgery and the Interactive CardioVascular and Thoracic Surgery (14). The study endpoint was defined as all-cause mortality in the ICU. Variables are presented as numbers (percentages) or as (means±standard deviations). Between-group comparisons were drawn using χ2 tests for categorical data and Student’s t-tests for continuous data. We used Cox proportional regression to calculate the hazard ratios (HR) and 95% confidence intervals (95% CI) for ICU treatments associated with patient characteristics. In order to avoid overcorrection of cancer disease, the value obtained by subtracting the cancer related score from Charlson Comorbidity Index was used. Probabilities of P<0.05 were considered statistically significant. All analyses were carried out using R v3.4.4. We used the survival package and ggplot2 functions in R to get appropriate updated citations. 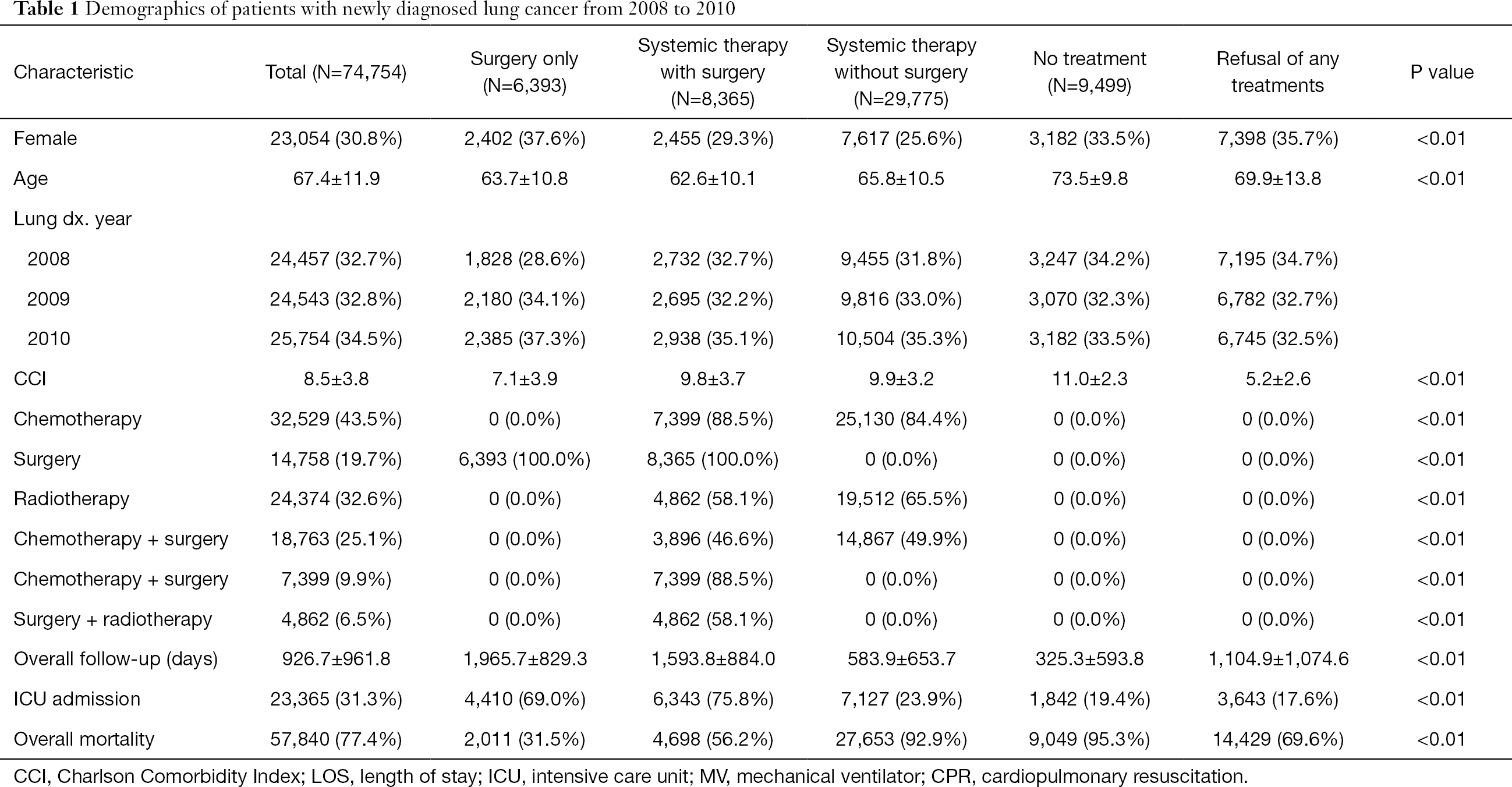 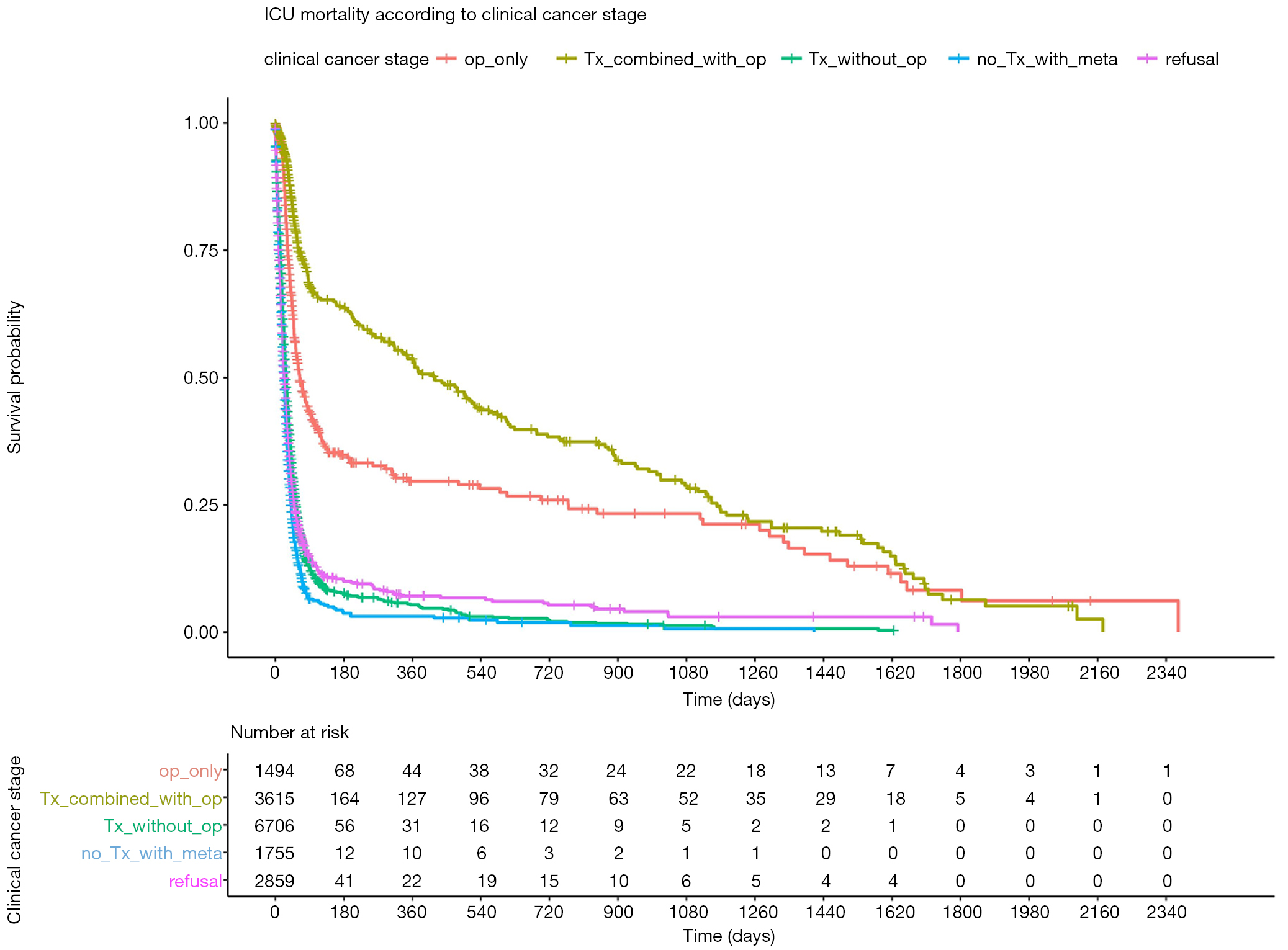 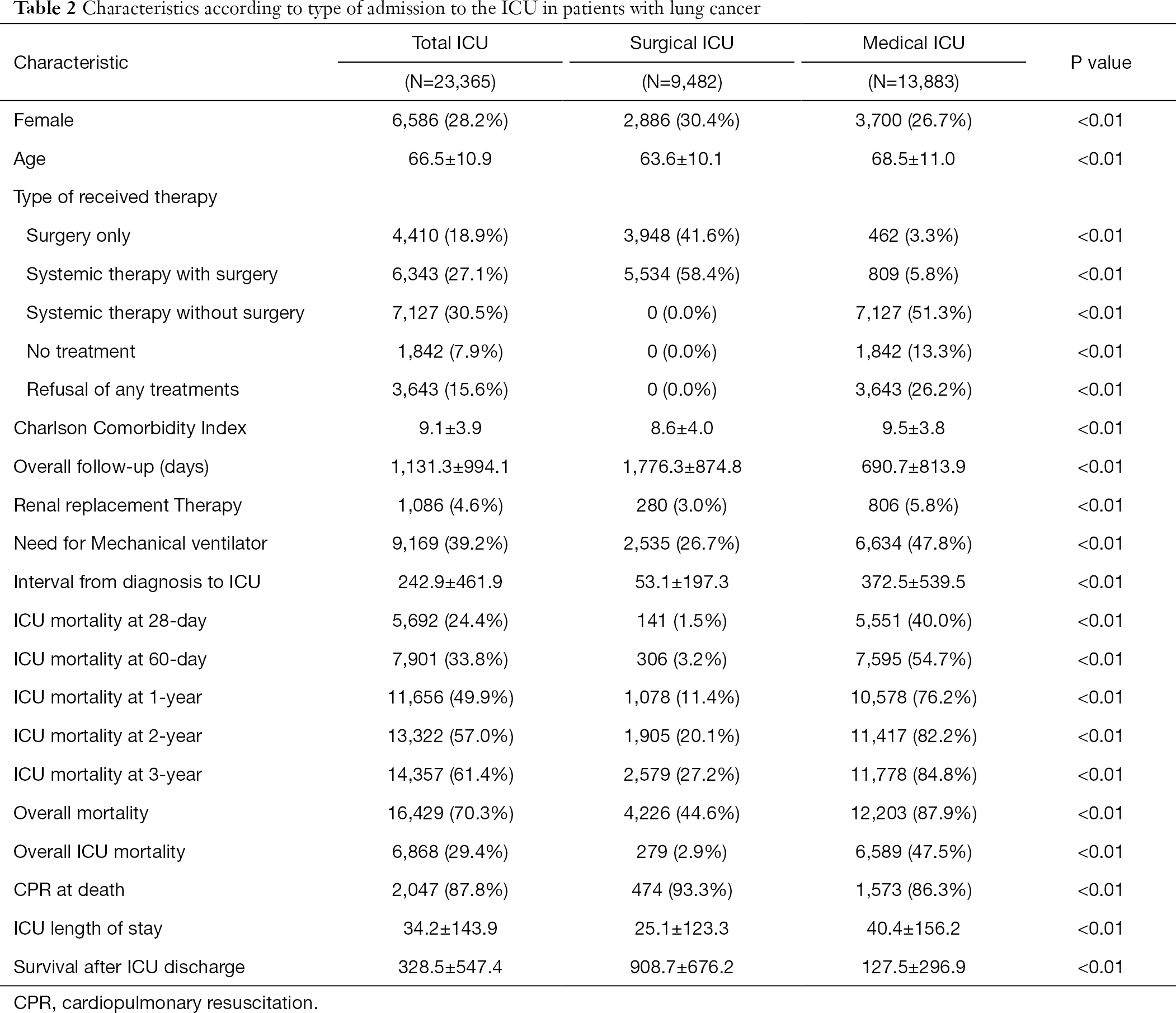 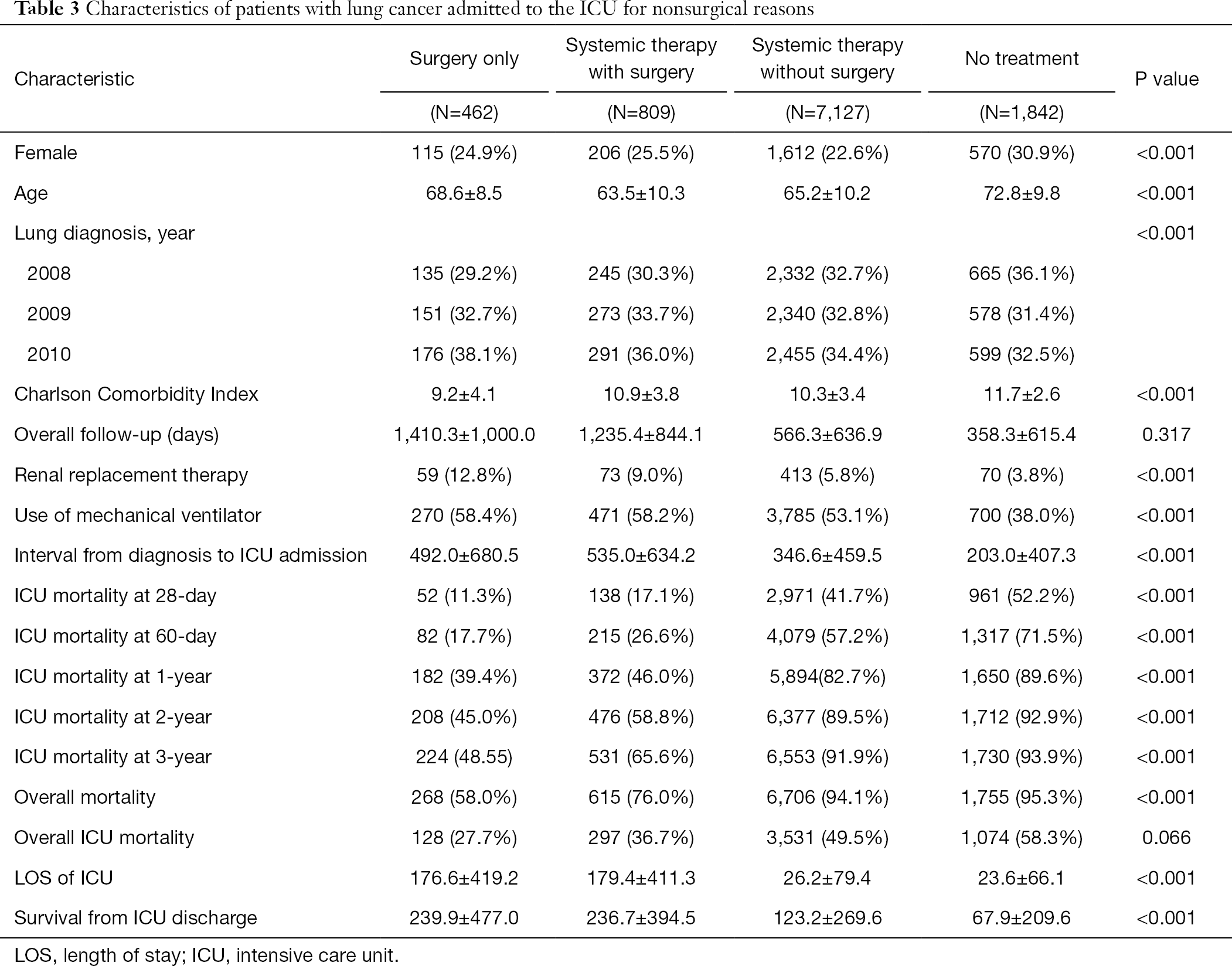 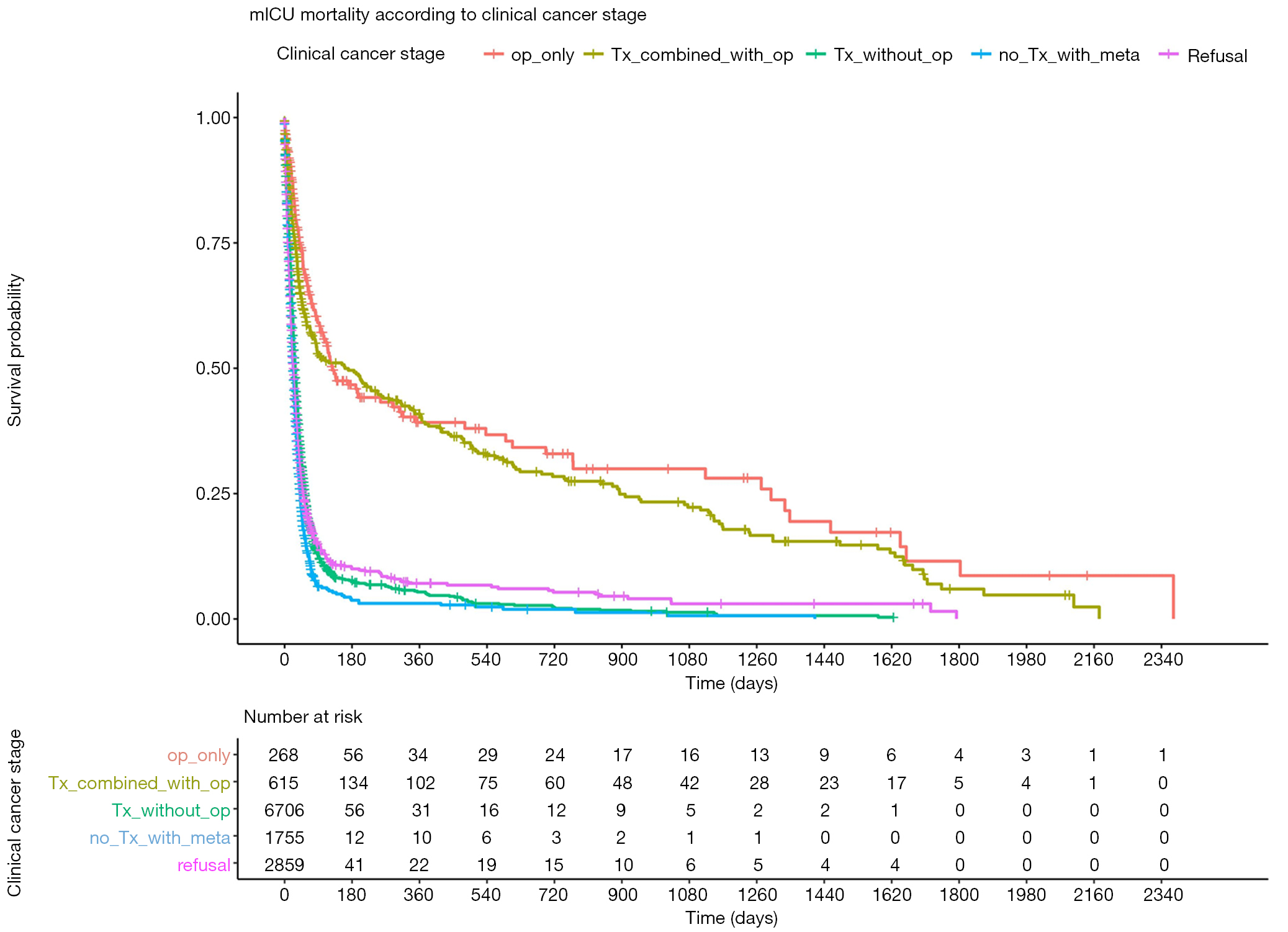 This study shows the comprehensive outcomes of lung cancer patients admitting to ICU according to modality receiving treatment, based on a national population study. Treatment outcomes varied significantly depending on the clinical stage. Although there was no difference in the frequency of treatment with ventilators, patients with advanced lung cancer who did not receive treatment from mechanical ventilators showed a ten-fold higher risk of death than those with early lung cancer under the same treatment conditions. Our results suggest that while critical care has improved significantly, the biggest challenge faced by critically ill patients with lung cancer lies in the cancer stage itself.

Better understanding of clinical outcomes for lung cancer patients admitting ICU can be achieved from large sample sized or population based studies. A population based observational study in the Scotland region showed that lung cancer were most common cases of ICU admission for emergency medical reasons and had greatest mortality of 60% among solid cancers, except lowest mortality in cases of postoperative ICU care (19). Another cohort study reported trends and risk factors of mortality for patients with lung cancer in admitting to ICU using the US Medicare registry (17). Patients who received MV went could discharge with less than 20% and survived with only 15% after discharge, while the overall survival had not improved from 1992 to 2007.

A multinational study was reported for the outcomes of ICU admission in patients with lung cancer (12). The study suggested that patients not fit for chemotherapy or patients with poor performance might be better to receive palliative care than ICU care in critically ill states. Our study has several strengths compared to above large scaled or population based studies. First, we evaluated a national claim data for Korean general population which all people are covered and followed up long terms of 5 years. Second, we separated from post-operative ICU admission known to result good prognosis. On these strengths, it can lead for physicians to decide more carefully and discuss in detail for whether to proceed ICU care including intubation and mechanical ventilation in patients with lung cancer.

There are several limitations to consider our results. First, potential selection bias could interfere results of our study. This study was not planed with prospective and randomized control design, and did not use propensity matching groups. However, this study could show comprehensive insights for ICU outcomes in critically ill patients with lung cancer, using a national population-based cohort, as like other national studies with important impact (12,17). Second, we used administrative reimbursement claim data for this study. The data did not include any information on the pathologic and radiologic findings of lung cancer. We could not differentiate between small cell carcinoma and non-small cell carcinoma. In our study, TNM staging system could not be applied due to the innate limitations of claim data. The TNM stage at the time of diagnosis is important for planning future therapy and predicting the prognosis at the time of diagnosis. However, the cancer treatments that the patient actually received before being admitted to ICU are more important in the prognosis of intensive care. Third, we could not obtain the code status and performance status of lung cancer patients. Therefore, our results may have included futile critical care, with no clear distinction between treatment groups. However, these results have implications for understanding and assessing the actual critical care as not all hospitals are well-skilled and systematic in the treatment of critically ill patients with lung cancer. Despite these limitations, we have identified prognostic factors for ICU outcomes in critically ill patients with lung cancer in large sample size, population-based dataset

It is vital for physicians involved in critical care to understand factors influencing clinical outcomes of medical ICU in order to avoid futile treatment in patients with lung cancer and to use limited medical resources more effectively (1-3). Our study confirms that clinical cancer staging is the most important factor in predicting outcomes in critically ill patients with lung cancer, and that the need for a mechanical ventilator contributes to prognostic factors especially in early lung cancer patients. Further studies of prognostic factors for each stage of lung cancer are needed to establish appropriate critical care directions.

Reporting Checklist: The authors have completed the STROBE reporting checklist. Available at http://dx.doi.org/10.21037/atm-21-298

Conflicts of Interest: All authors have completed the ICMJE uniform disclosure form (available at http://dx.doi.org/10.21037/atm-21-298). The authors have no conflicts of interest to declare.

Ethical Statement: The authors are accountable for all aspects of the work in ensuring that questions related to the accuracy or integrity of any part of the work are appropriately investigated and resolved. The study was conducted in accordance with the Declaration of Helsinki (as revised in 2013). The study was approved Kangwon National University Hospital Institutional Review Board (B-2018-02-002) and individual consent for this retrospective analysis was waived.