Sepsis is a systemic disease, which deteriorates rapidly with multiple organ dysfunction (1). In the United States, despite advanced medical resources, the mortality rate of sepsis is 34–56%, according to recent retrospective clinical studies (2). Sepsis is not only a major health issue but also a serious economic problem (3). It is considered to be a systemic response of infection including bacteria, viruses, and fungi (4,5). Inflammatory factors such as tumor necrosis factor α (TNF-α), interleukin 6 (IL-6) and anti-inflammatory factors such as interleukin 10 (IL-10) (6,7) are involved in the development of sepsis. Macrophage dysfunction has been shown to be associated with exacerbation of sepsis (8-10).

Some RNA-binding proteins (RBPs) are related to multiple functions of eukaryotic cells (11), including mobilization, translation, and apoptosis., As an RBP with G-rich elements, G-rich sequence factor 1 (GRSF1) (12) participates in essential cellular processes in senescent cells (13,14). It is also considered a mitochondrial protein (14) involved in stabilizing target messenger RNAs (mRNAs). Lipopolysaccharide (LPS) induces inflammatory responses by activating nuclear factor kappa light chain enhancer of activated B cells (NF-κB) signaling pathways, and is the main element of gram-negative bacteria cell walls (7,15,16). Loss of GRSF1 is associated with increased production of the pro-inflammatory factor IL-6 (17). Over production and secretion of pro-inflammatory factors is a vital sign of sepsis deterioration (18). These findings have indicated that GRSF1 may play an important role in the inflammatory response of sepsis. We hypothesized that GRSF1 could be a potential biomarker in the prognosis of septic patients.

In our study, expression of GRSF1 in the peripheral blood of septic patients and healthy controls were compared, and the severity of sepsis was evaluated by combined GRSF1 and other biomarkers. We used RAW 264.7 cells and mouse peritoneal macrophages induced by LPS to investigated GRSF1 expression in vitro, and cecal ligation and puncture (CLP) induced mice were established to explore GRSF1 expression in vivo. We present the following article in accordance with the MDAR reporting checklist (available at http://dx.doi.org/10.21037/atm-21-1022).

A total of 42 sepsis patients according to the definitions of the Sepsis 3.0 2016 (19) between 1 April 2019 and 31 December 2019 in our hospital and 32 healthy donors were included in this study. Blood samples were collected within 24 h of emergency department admission. The Sequential Organ Failure Assessment (SOFA) and Acute Physiologic Assessment and Chronic Health Evaluation II (APACHE II) scores were calculated, white blood cells (WBC), and C-reactive protein (CRP) were recorded at the time of hospitalization. This study protocol was approved by the Ethics Committee of the Affiliated Hospital of Nantong University (2017-L021) with conformation to the Declaration of Helsinki (as revised in 2013). Participants or authorized clients provided informed consent prior to commencement of the study.

Female C57BL/6J mice, aged 6–8 weeks, and weighing about 22 g, were obtained from the Laboratory Animal Center of Nantong University. A mouse model of cecal ligation and perforation (CLP) induced sepsis was established. Mice were randomly subdivided into a sham operation group and sepsis group (n=6). Before surgical procedures, mice were anesthetized with 10% chloral hydrate (400 mg/kg) via intraperitoneal injection. A mid-line laparotomy incision (1–2 cm) was made to expose the cecum. Then, 50% of the cecum was ligated and a single hole was perforated with an 18-gauge needle. Next, the cecum was replaced in the abdominal cavity, and the incision was closed. The sham group underwent a similar procedure without ligation or perforation. Mice were checked every 8 hours for survival analysis. All animal experiments were undertaken in accordance with the National Institute of Health Guide for the Care and Use of Laboratory Animals. Animal experiments were approved by Ethics Committee of Affiliated Hospital of Nantong University.

The mice were purchased from the Laboratory Animal Center of Nantong University and housed according to standard protocol. To isolate and purify macrophages from mouse peritoneum, 1 mL of 6% starch broth was injected into the peritoneum before collection. After 2–3 days, the mice were euthanized and their abdomens were disinfected with 75% alcohol. The outer layer of the mice peritonea were cut open with scissors and 10 mL cold phosphate buffered saline (PBS) was injected into the abdominal cavity in order to wash the peritoneal macrophages. The peritoneum was gently massaged after the injection of PBS to exfoliate any attached cells into the fluid. The PBS was collected into a 15 mL tube from the peritoneum with a sterile straw and centrifuged at 1,000 ×g for 5 min. After centrifugation, the supernatant was removed and the cells were cultured in RPMI-1640 combined with 100 U/mL penicillin, 100 mg/mL streptomycin, and 10% fetal bovine serum [(FBS); cat. No. E600001; Sangon Biotech, Shanghai, China], at 37 °C and 5% CO2. The cells were seeded into a 6-well plate (1×106 cells/well) and incubated overnight. Non-adherent cells were gently washed 3 times with warm PBS. After completing the above experimental steps, about 90% of the pure macrophages were used in the experiment.

Tissues (50 mg) were prepared with radio immunoprecipitation assay (RIPA) combined with protease inhibitors (ab65621, Abcam, Burlingame, USA) and 100 uM phenylmethylsulfonyl fluoride (PMSF) (#P7626, Sigma). After homogenization, the mixture was incubated on ice for 30 min. The supernatant was collected, followed by centrifugation at 4 °C for 10 minutes at 14,000 g. A DC Bradford assay kit (Bio-Rad, Hercules, CA, USA) was used to measure the protein concentration. Protein (200 ng) was electrophoresed in an 8–12% Tris-Glycine gel (Sangon Biotech) and electrotransferred onto a polyvinylidene difluoride (PVDF) membrane (Thermo Fisher Scientific). In order to eliminate the influence of nonspecific protein binding, the membrane was blocked with 5% nonfat milk, dissolved in 0.05% tris-buffered saline and Tween 20 (TBST), at room temperature for at least 1 h. The membranes were incubated with primary antibodies against GRSF1 (1:1,000; Abcam) and β-actin (1:4,000; Abcam) overnight at 4 °C. After incubation with secondary antibodies (Thermo Fisher Scientific), western blotting signals were visualized with electrochemiluminescence (ECL) or ECL prime by Bio-Rad Gel Doc XR+ (Bio-Rad). The stripe density was normalized with ImageJ v1.47 software (National Institutes of Health, Bethesda, MD, USA).

GRSF1 expression in patients with sepsis 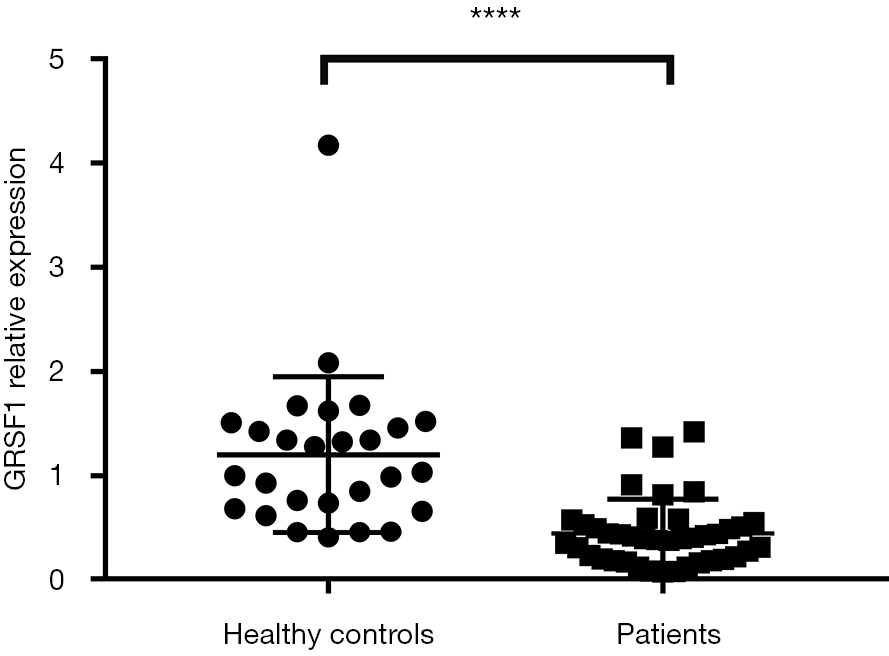 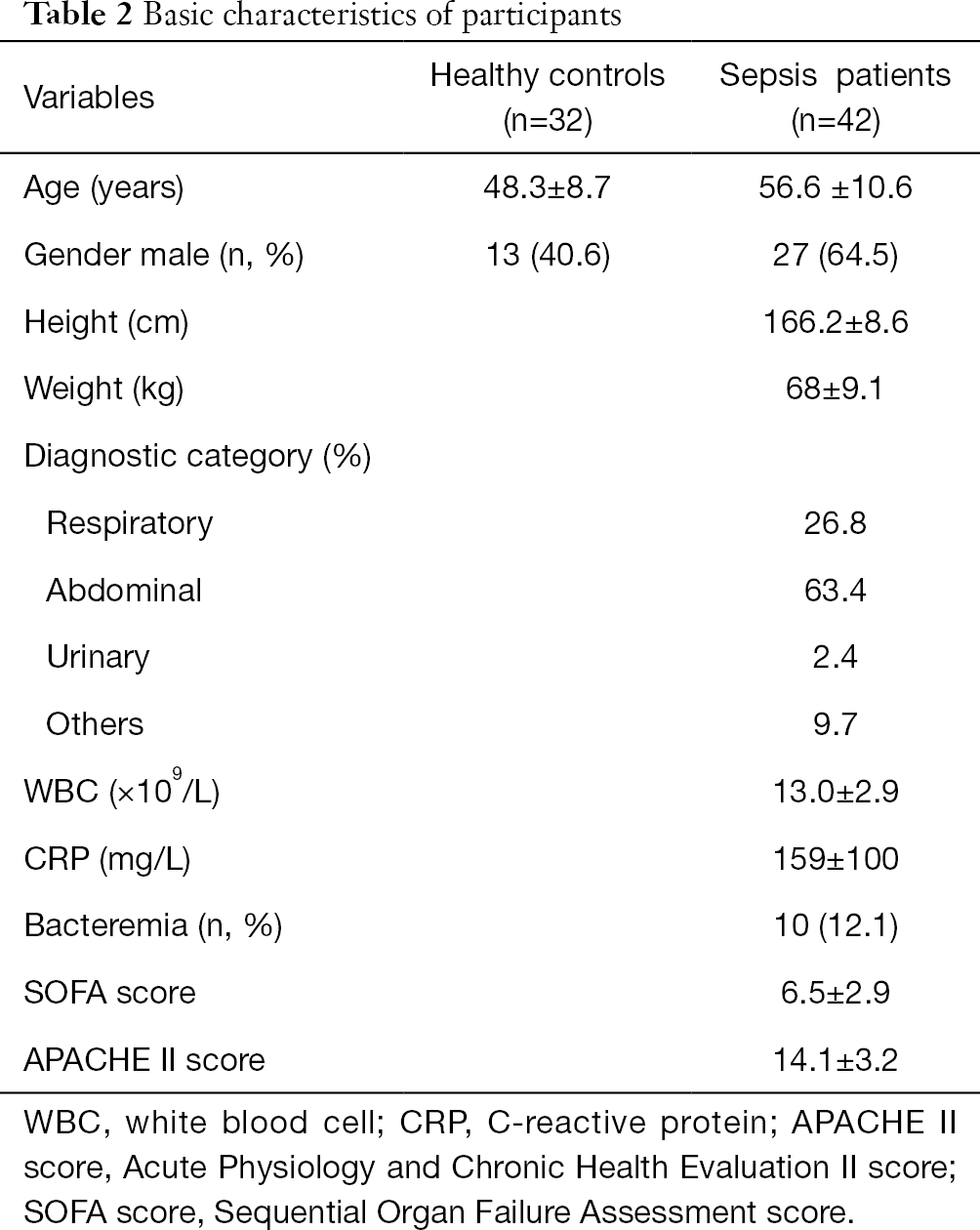 Correlation of GRSF1 expression with clinical characteristics of sepsis patients 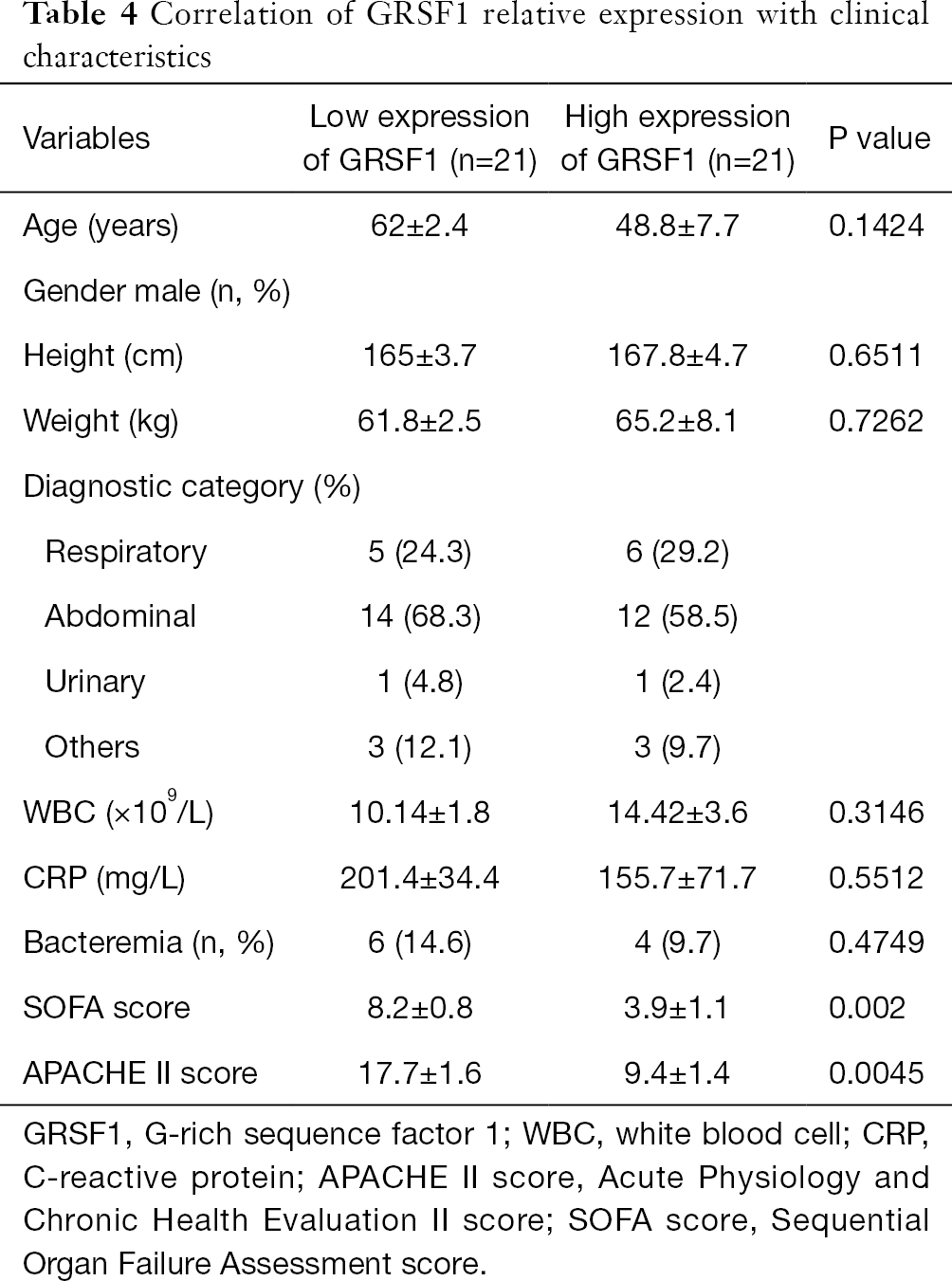 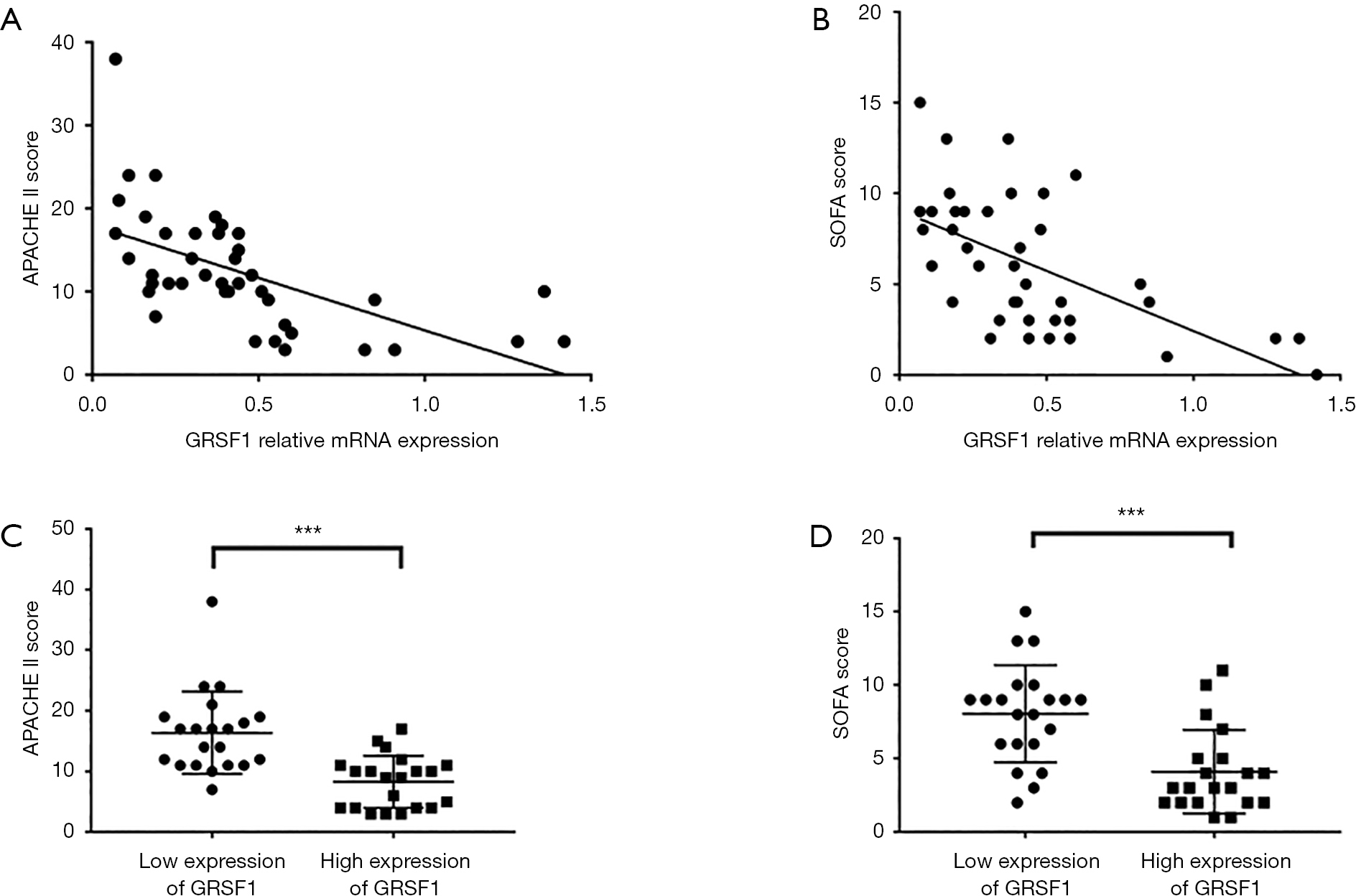 Prognostic value of the expression of GRSF1 in patients with sepsis

The GRSF1 expression in RAW 264.7 Cells and mouse peritoneal macrophages after LPS-stimulation

We aimed to explore the role of GRSF1 in the inflammatory response of macrophages stimulated by LPS. Firstly, in RAW 264.7 cells were stimulated by 100 ng/mL LPS for the indicated times, and we then examined the expression of GRSF1. At the mRNA level, GRSF1 significantly increased at 8 h and then gradually decreased to the normal level within 24 h (Figure 4A). In protein analysis, GRSF1 had increased at 8 and 16 h (Figure 4B,C). In addition, we also analyzed GRSF1 expression in mouse peritoneal macrophages under the same conditions. The GRSF1 mRNA level was increased at 4 and 8 h and then slightly decreased within 24 h (Figure 4D). The GRSF1 protein level was increased at 4 and 8 h (Figure 4E,F). 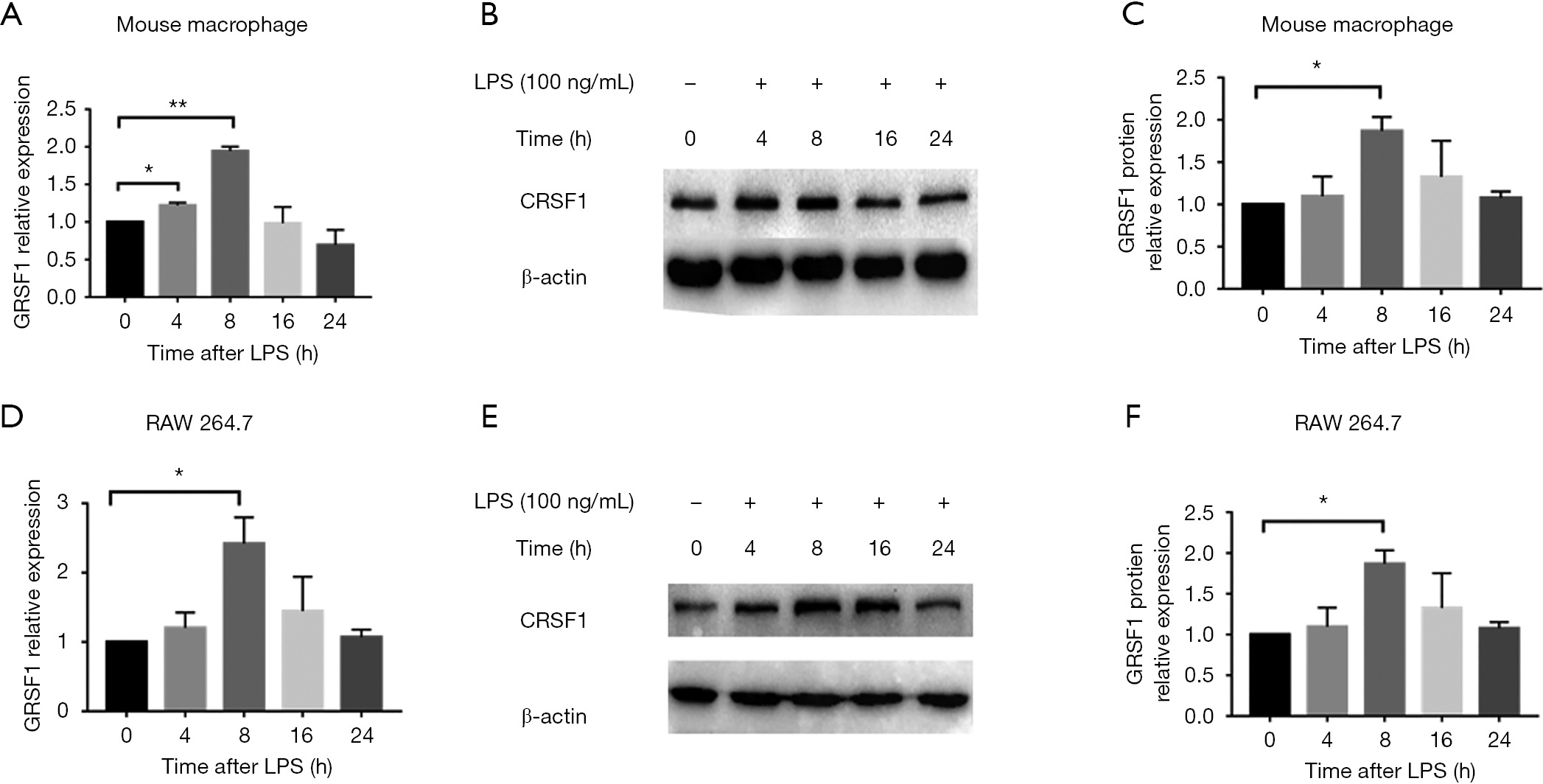 To evaluate the role of GRSF1 in sepsis, we performed a CLP surgery in mice to induce sepsis. The surgery was performed according to protocol (20). We evaluated this by performing qPCR for GRSF1 using RNA extracted from mouse heart, liver, lung, and kidney (Figure 5A,B,C,D), but the differences were not statistically significant. 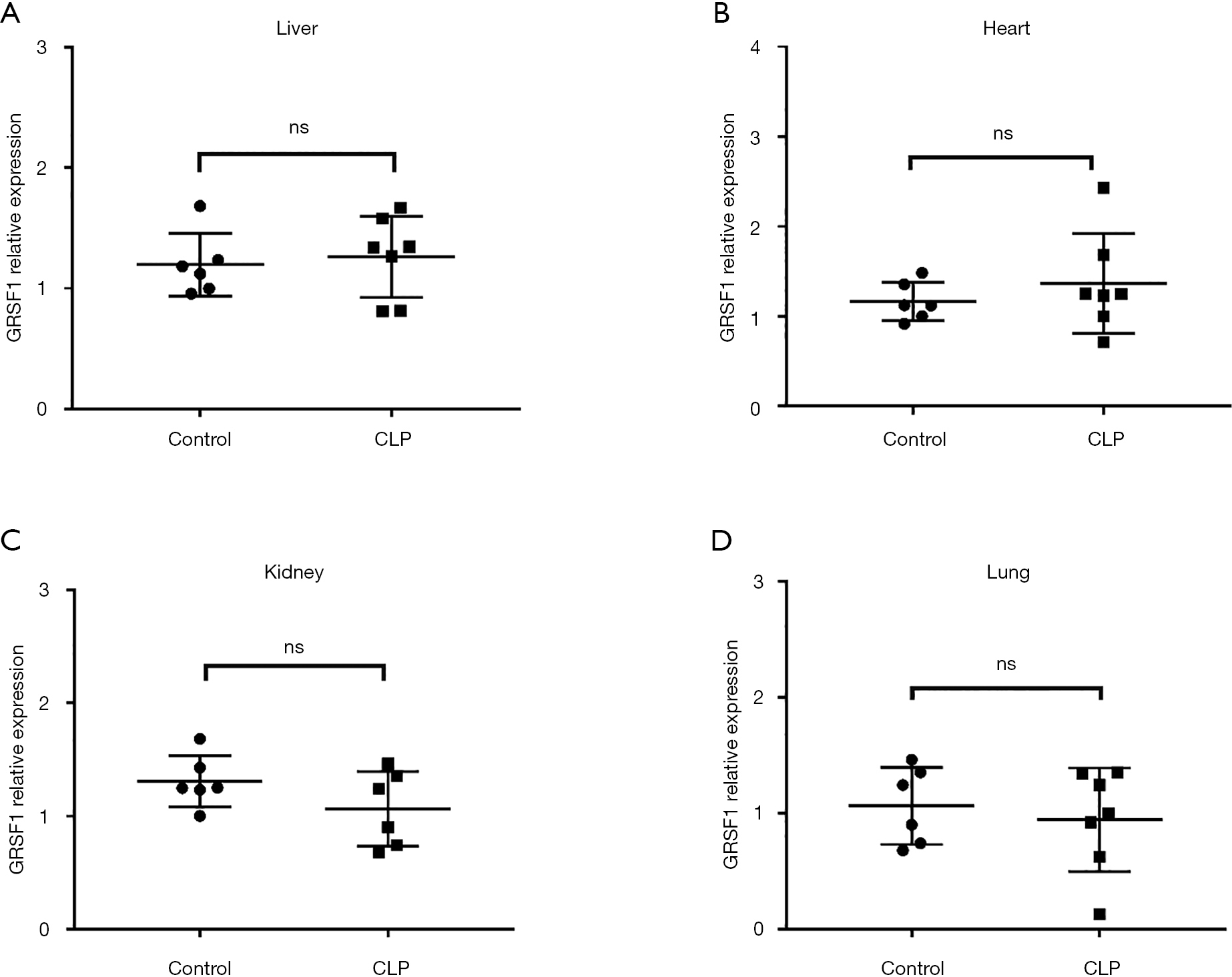 GRSF1 was decreased in sepsis in the CLP model, especially in the spleen

Compared to sham operated mice, decreased expression of GRSF1 was observed in the spleen of mice treated with CLP (Figure 6A,B,C). These data suggest that the expression of GRSF1 is decreased in the spleen in CLP-induced sepsis mice. To determine whether expression in the spleen was associated with the severity of sepsis in mice, we divided the CLP models into 2 groups according to whether the mice survived beyond 24 hours. The GRSF1 expression in mice that died before 24 hours was much lower than in mice that survived much longer than 24 hours (Figure 6D). Therefore, the spleen was shown to be the target organ of GRSF1. Under these circumstances, we could speculate that the lower the GRSF1 expression in sepsis, the more serious the severity of sepsis. 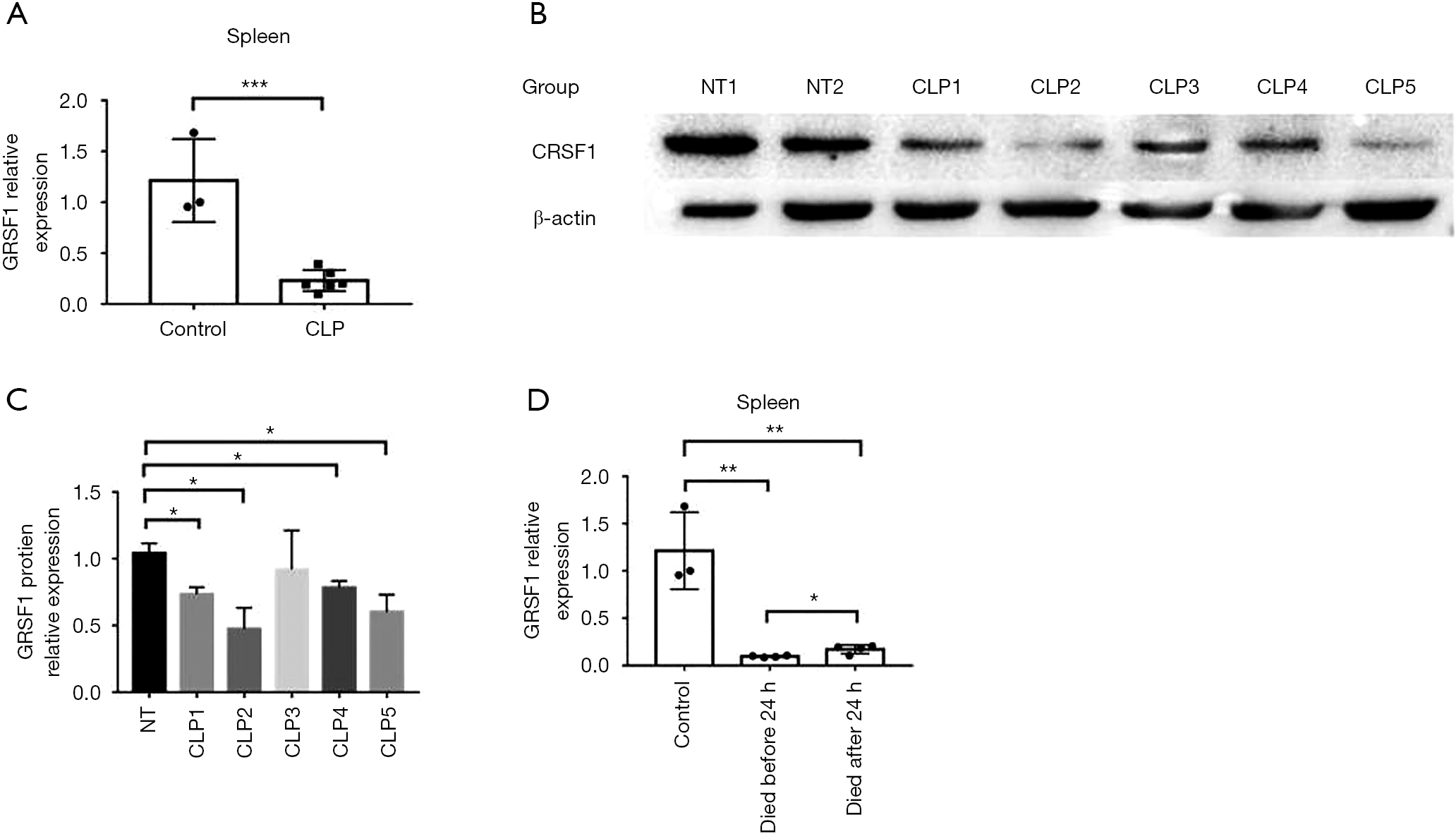 Although GRSF1 expression in inflammation or sepsis in humans has not been studied extensively, it has been found that GRSF1 is a mitochondrial protein which regulates RNA processing. Until now, the physiological function of GRSF1 is still unclear; however, some studies have indicated possible pathologies related to inflammation. In CLP mice, we found that the protective effects depended on GRSF1 expression. We will explore the mechanism of GRSF1 in sepsis in future research.

Our research had several limitations. Firstly, considering that the number of cases included in this study was insufficient, subgroup analysis was to study the effects of admission, complications, or infection sites on GRSF1 expression was not feasible. Secondly, the research was performed in a single hospital center, in this case, the scalability can only be set to suit a limited variety of situations. Thirdly, the study lacked correlation with GRSF1 expression and 28-day mortality. Fourthly, in this study, we aimed to confirm whether GRSF1 expression could be used as a biomarker for early evaluation of severity in sepsis patients. Thus we measured the GRSF1 expression in peripheral blood within a 24 h period, instead of consistent measurement. For further research, we need to ascertain if changes in GRSF1 expression are related to the SOFA and APACHE II scores.

Considering the SOFA and APACHE II scores are predictors of sepsis severity, together with the correlation between GRSF 1 expression, GRSF1 are likely to be considered as a promising biomarker of the sepsis severity.

The authors thank The Affiliated Hospital of Nantong University, for expert technical assistance and statistical analysis support. The manuscript is approved by all authors for publication.

Reporting Checklist: The authors have completed the MDAR reporting checklist. Available at http://dx.doi.org/10.21037/atm-21-1022

Conflicts of Interest: All authors have completed the ICMJE uniform disclosure form (available at http://dx.doi.org/10.21037/atm-21-1022). The authors have no conflicts of interest to declare.

Ethical Statement: The authors are accountable for all aspects of the work in ensuring that questions related to the accuracy or integrity of any part of the work are appropriately investigated and resolved. This study was approved by the Ethics Committee of the Affiliated Hospital of Nantong University (2017-L021) with conformation to the Declaration of Helsinki (as revised in 2013). Participants or authorized clients provided informed consent prior to commencement of the study. All animal experiments were undertaken in accordance with the National Institute of Health Guide for the Care and Use of Laboratory Animals. Animal experiments were approved by Ethics Committee of Affiliated Hospital of Nantong University.