We present the following article in accordance with the ARRIVE reporting checklist (available at http://dx.doi.org/10.21037/atm-21-1230).

Animal experiments were carried out in accordance with the institutional animal care guidelines and approved by the Administration Committee of Experimental Animals, Jiangsu Province (20180305-004). Adult male Sprague-Dawley (SD) rats (weight, about 200 g) were provided by the Experimental Animal Center of Nantong University (Nantong, Jiangsu, China) with routine provision of food and water, at 22 °C, with a 12:12-h light-dark cycle. For animal treatments, SD rats were randomly divided into 2 groups (n=3), namely 1 sham group (only the sciatic nerve was exposed) and 1 experimental group (creating a 10 mm long defect of the sciatic nerve). After operation, all rats were euthanized under anesthesia at 14 d, and the TA muscles were dissected, rapidly frozen on liquid nitrogen, and stored at –80 °C for subsequent experiments.

Total RNA was extracted from muscle samples and its quality was detected. Then, the Truseq Stranded Total RNA with Ribo-Zero Gold kit (Illumina, San Diego, CA, USA) was used to digest the RNA into short pieces. The broken RNA was used as a template to synthesize first cDNA strand with random primers of 6 bases. Next, a second strand synthesis reaction system was formulated to synthesize second strand cDNA. During the synthesis of second strand cDNA, deoxyuridine triphosphate (dUTP) was substituted for deoxythymidine triphosphate (dTTP), and then different joints were connected. A strand containing dUTP was digested by uracil N-glycosylase (UNG) enzymatic method, and only 1 strand of cDNA connecting different joints of the strand was retained. A first strand of cDNA was purified using a purification kit. The end of the purified cDNA strand was repaired, a tail was added and the sequencing connector was connected, fragment size selection was performed, and polymerase chain reaction (PCR) amplification was performed at last. After the constructed RNA library had been qualified by Agilent 2100 BioAnalyzer (Agilent Technologies, Santa Clara, CA, USA), an Illumina sequencer was used for sequencing.

Unsupervised hierarchical clustering of DEGs was performed. We calculated the distance between pairs of multiple samples to form a distance matrix, combined the 2 closest classes into a new class, calculated the distance between the new class and the current class, and then combined and calculated until there was only 1 class. The expression of selected DEGs was used to calculate the direct correlation of samples. In general, the same sample could appear in the same cluster through clustering, and the genes clustered in the same cluster may have had similar biological functions.

After the DEGs had been obtained, GO enrichment analysis was performed on the DEGs to describe their functions through the Database for Annotation, Visualization, and Integrated Discovery (DAVID) v6.8 (https://david.ncifcrf.gov/tools.jsp). The number of DEGs included in each GO item was counted, and the significance of DEG enrichment in each GO item was calculated by hypergeometric distribution test. The calculated results showed a P value of enrichment significance, with a small P value indicating enrichment of DEGs in the GO item. Those GO categories with a P value <0.05 were considered significantly enriched.

The KEGG database (20) and DAVID bioinformatics resources were used for pathway analysis of DEGs, and hypergeometric distribution test was used to calculate the significance of DEGs enrichment in each pathway entry. The calculated results showed a P value of enrichment significance, with a small P value indicating enrichment of DEGs in the pathway entry. The KEGG pathway pictures were downloaded and the DEGs were labeled on the pathway map. Red indicated up-regulated genes, green indicated down-regulated genes, and yellow indicated both up-regulated and down-regulated genes. Those pathways with a P value <0.05 were considered significantly enriched.

When using RNA-seq data to compare and analyze whether there is differential expression of the same gene in two samples, two criteria can be selected: one is Fold Change, which is the change multiple of the same gene expression level in two samples; the other is P value or FDR (adjusted P value). In order to calculate the FDR value, we first calculate the P value of each gene, and then use the FDR error control method to correct the P value. The default screening condition was P<0.05 and the difference multiple was more than 2.

Transcriptome sequencing analysis was performed on the RNA sample extracted from TA muscles of rats at 0 and 14 days following sciatic nerve transection. Our study found that the expression of 5,690 transcripts in TA muscle changed at 14 days after denervation. Concretely, 2,749 transcripts were up-regulated, and 2,941 transcripts were down-regulated in denervated TA muscles after 14 days of denervation (Figure 1). These results in turn suggested that many biological processes and signaling pathways in skeletal muscle cells may also change significantly after denervation. These changes in biological processes and signaling pathways are bound to promote skeletal muscle atrophy. 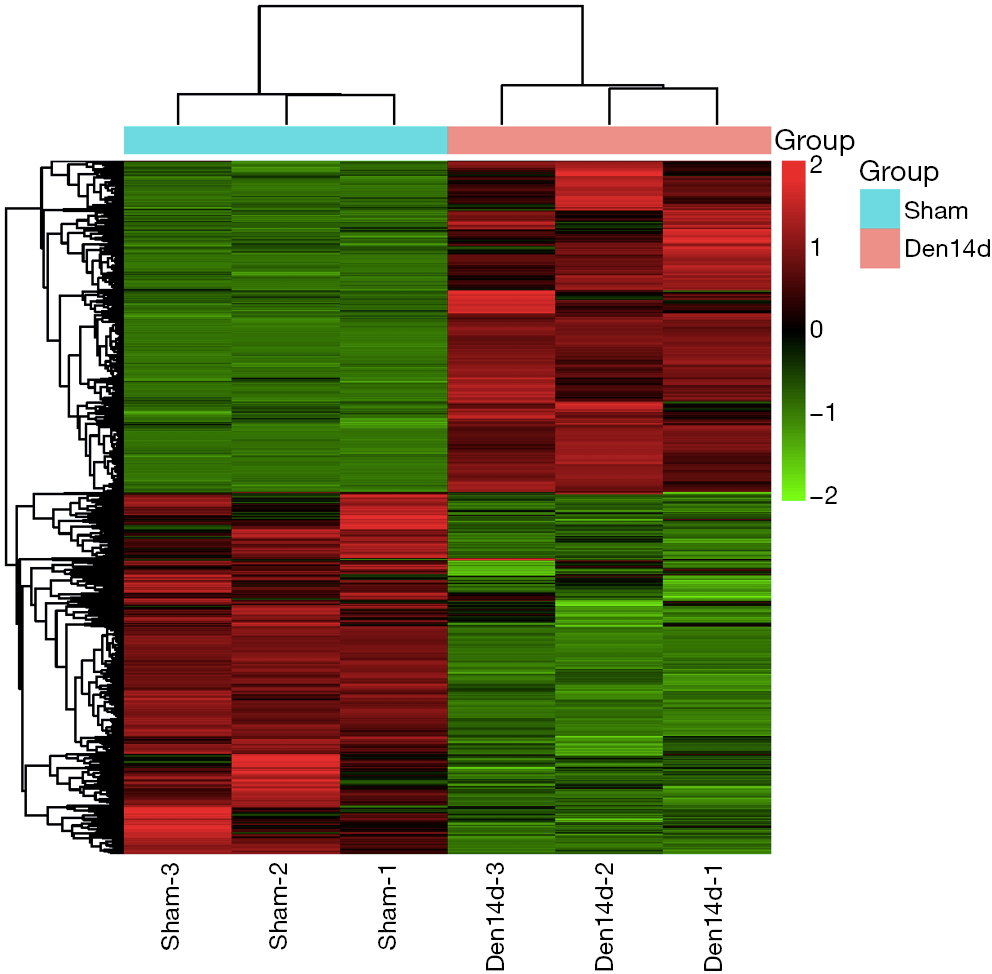 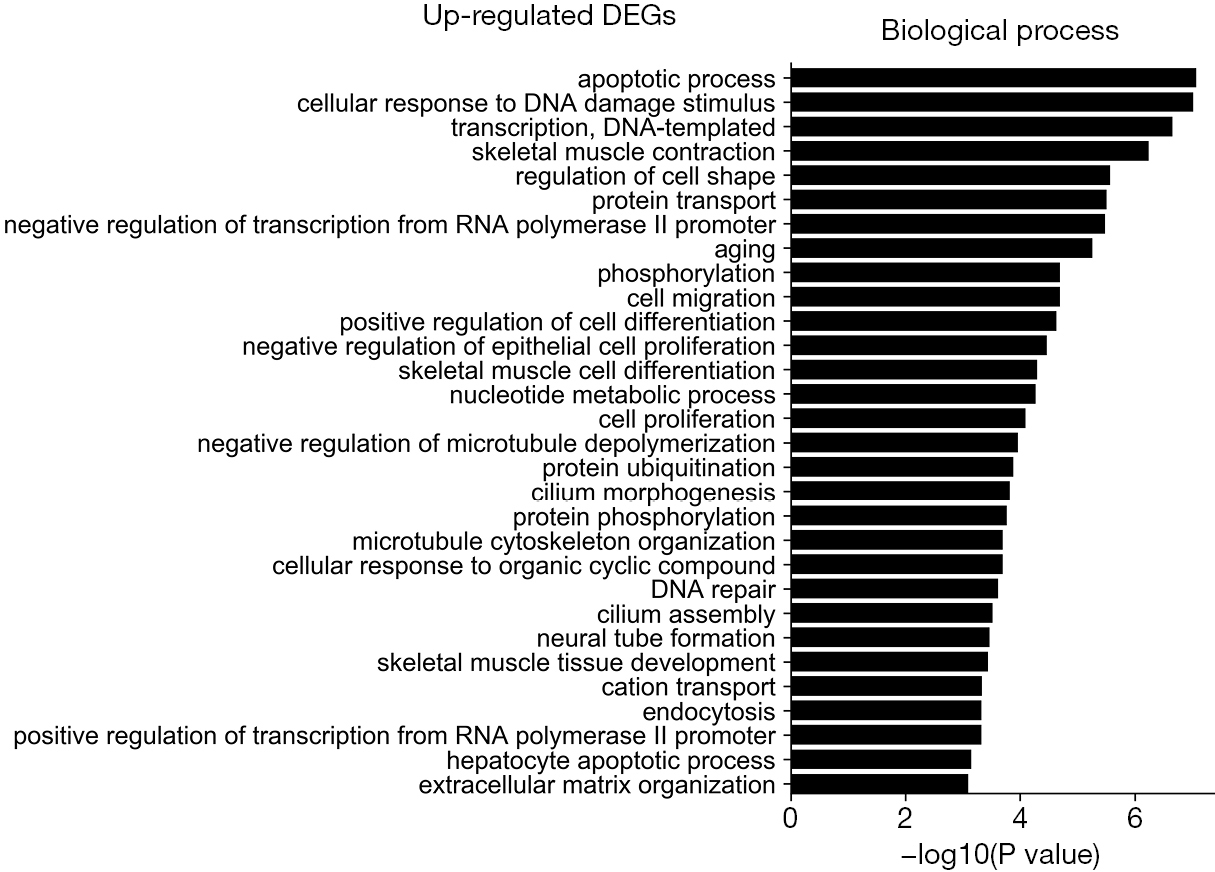 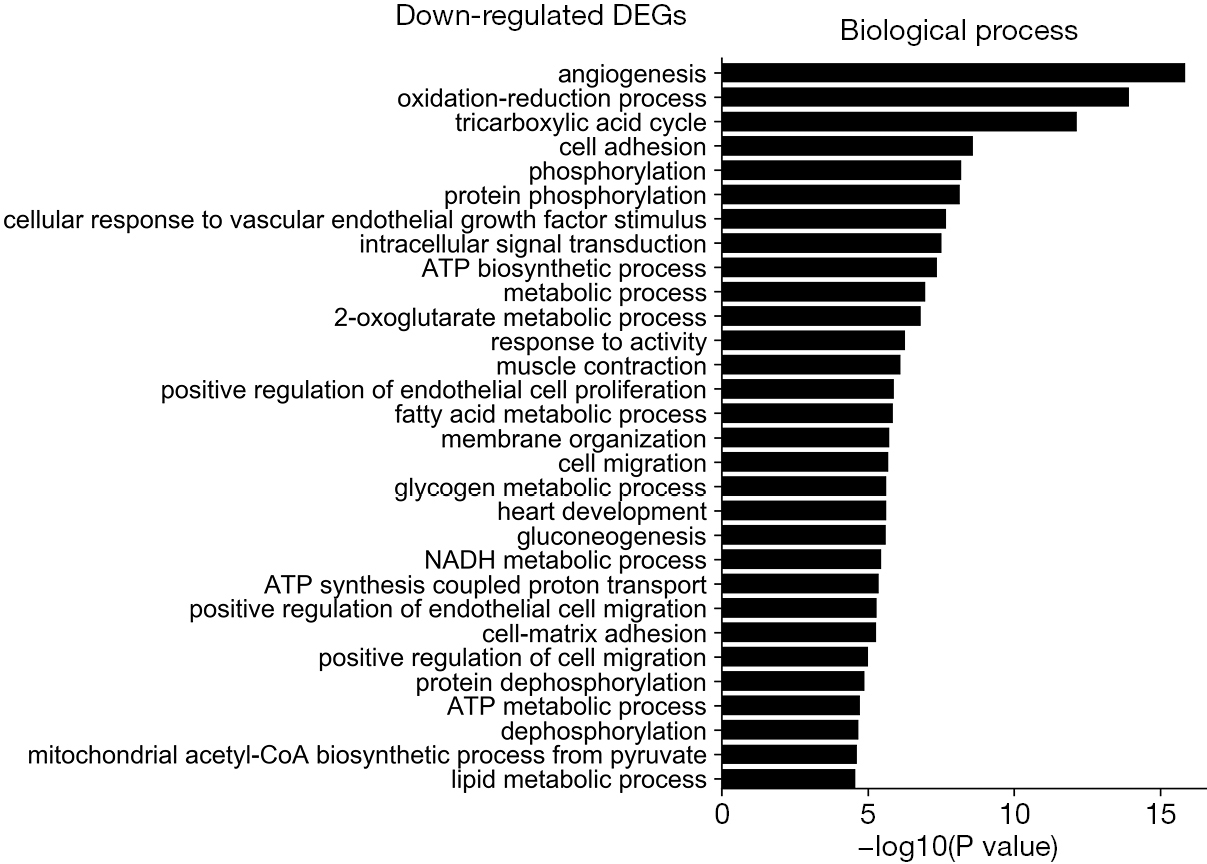 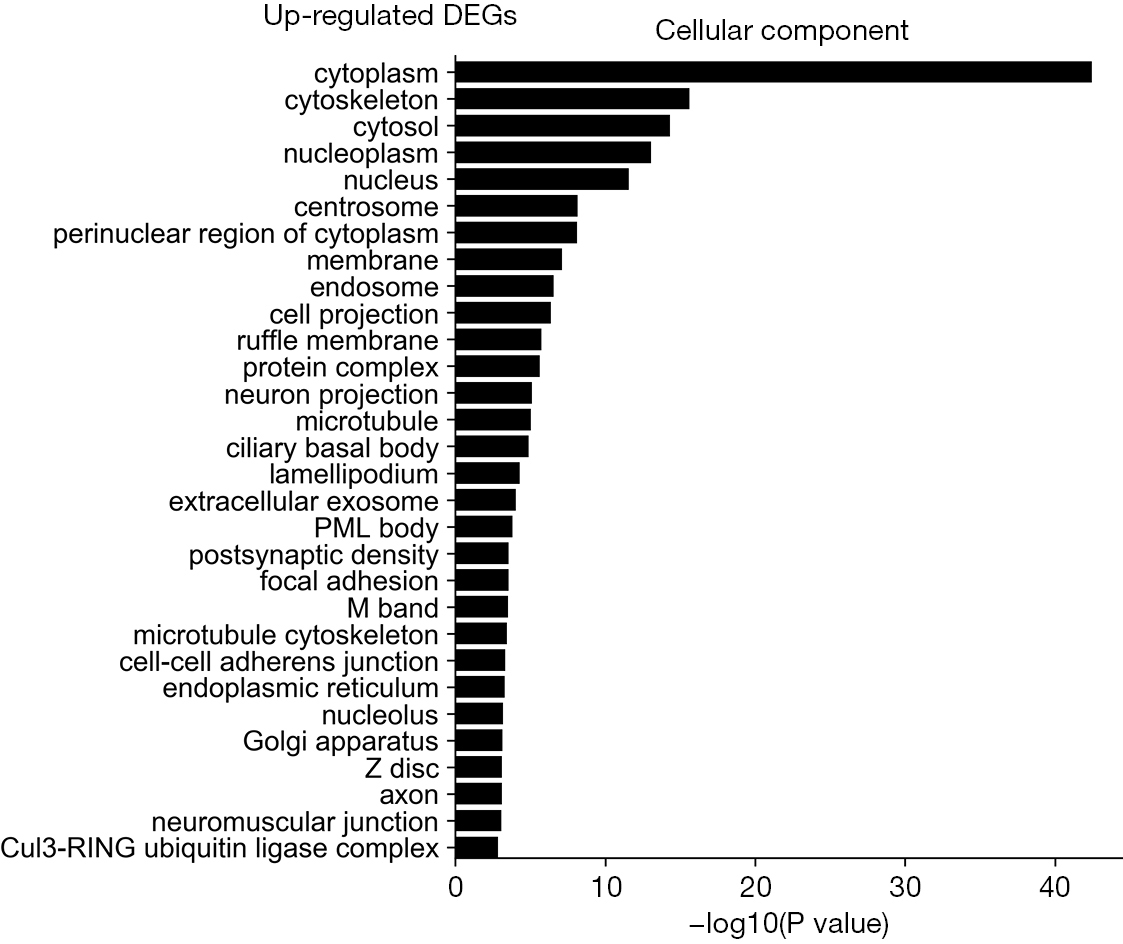 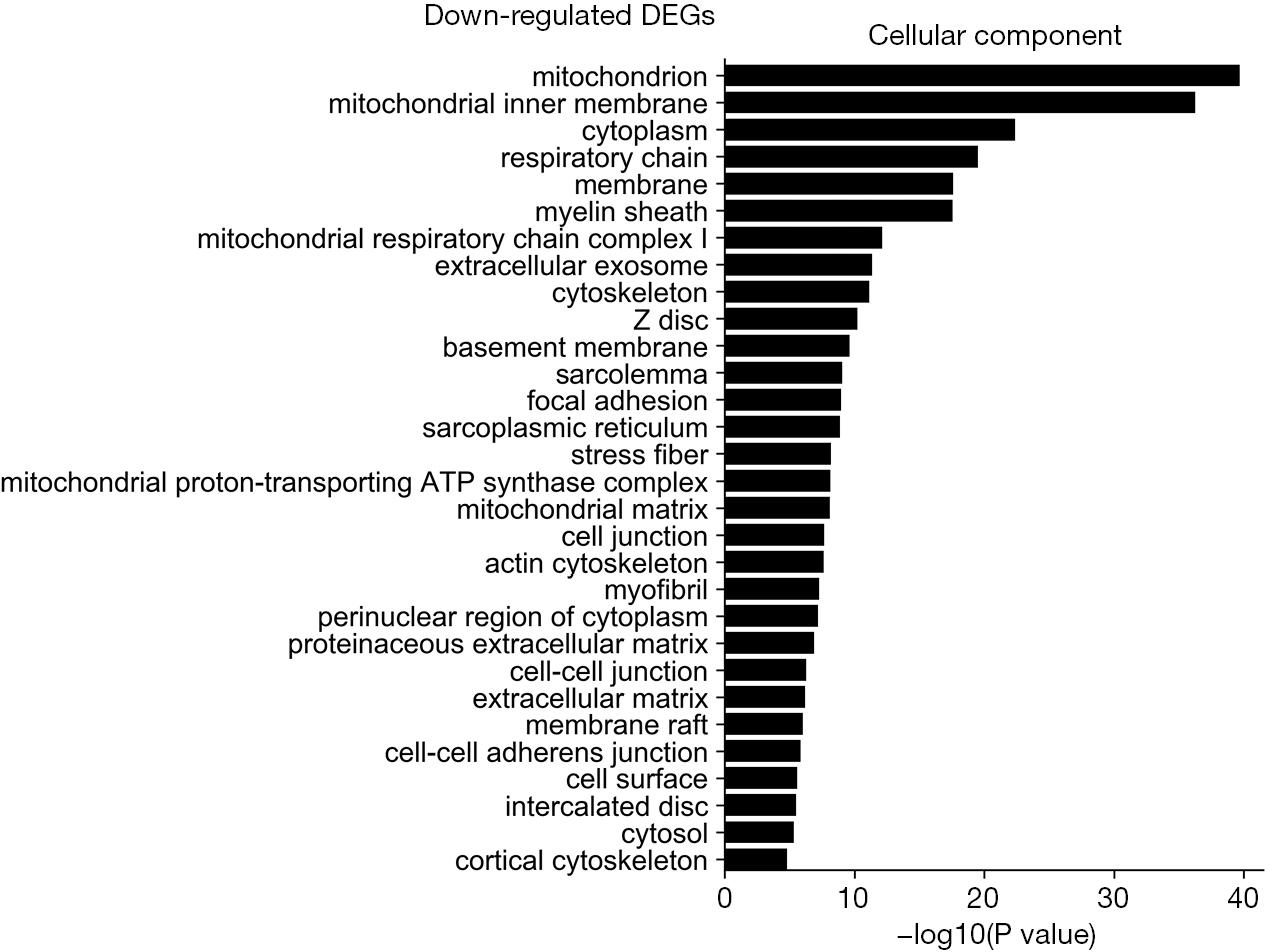 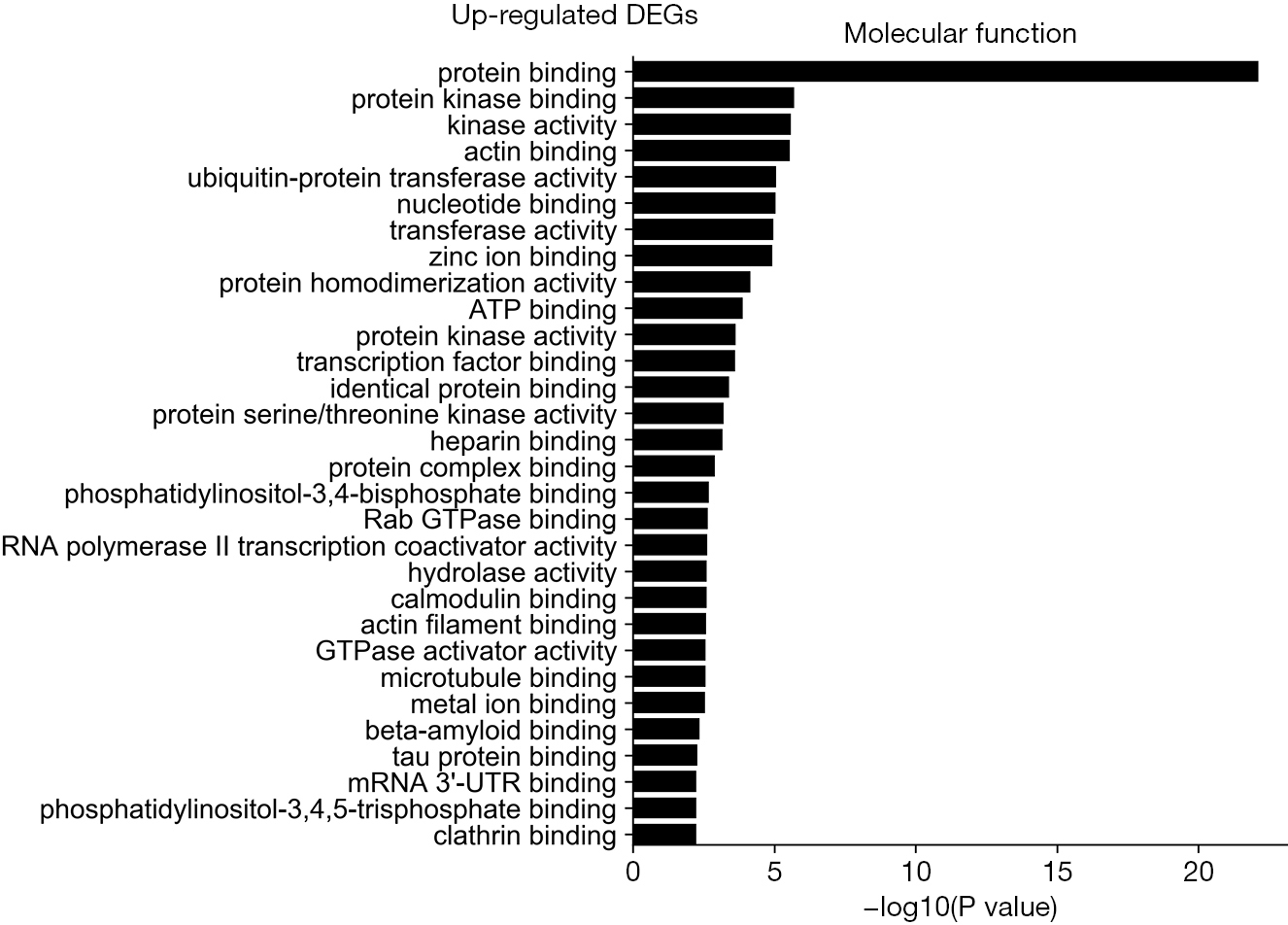 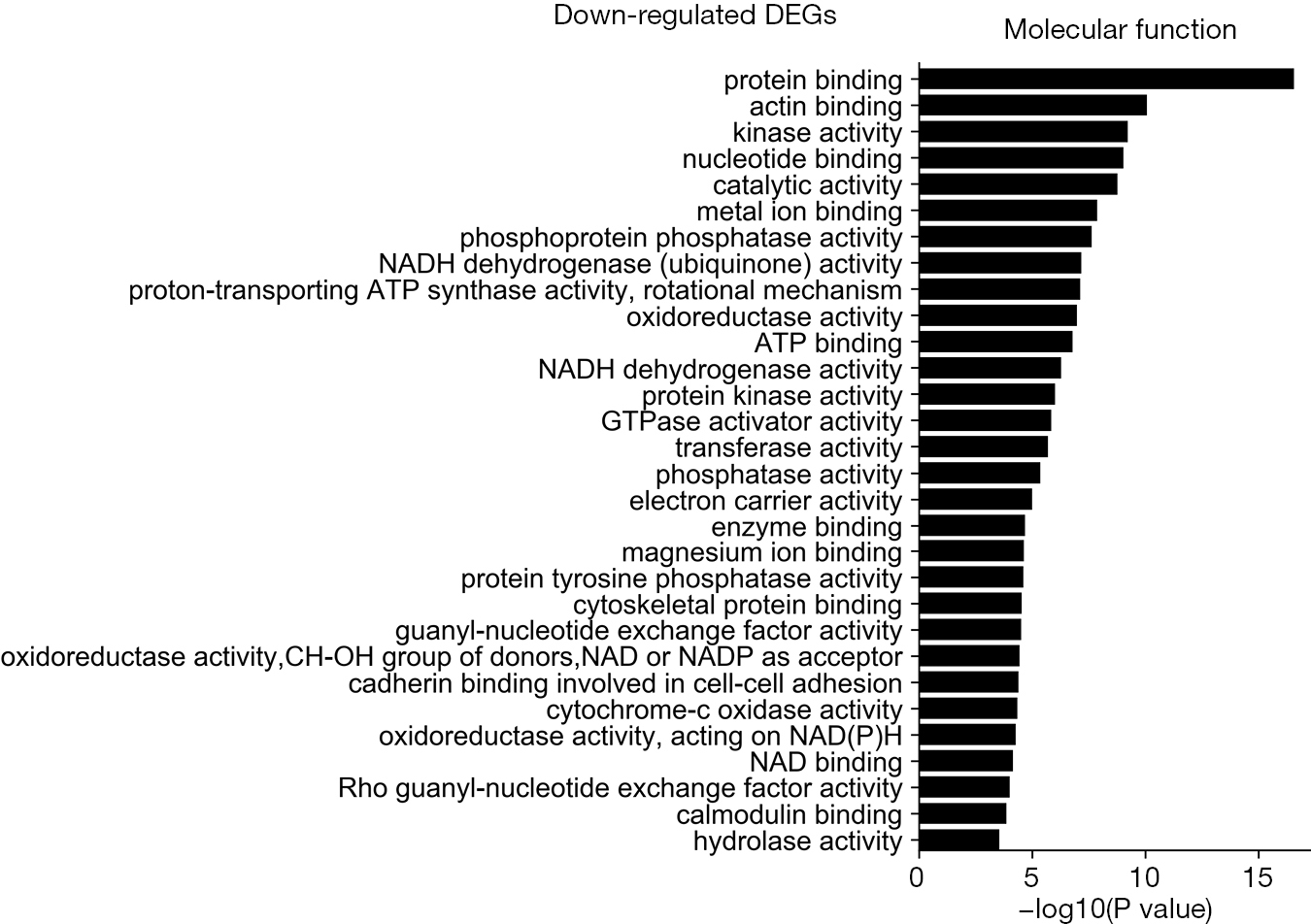 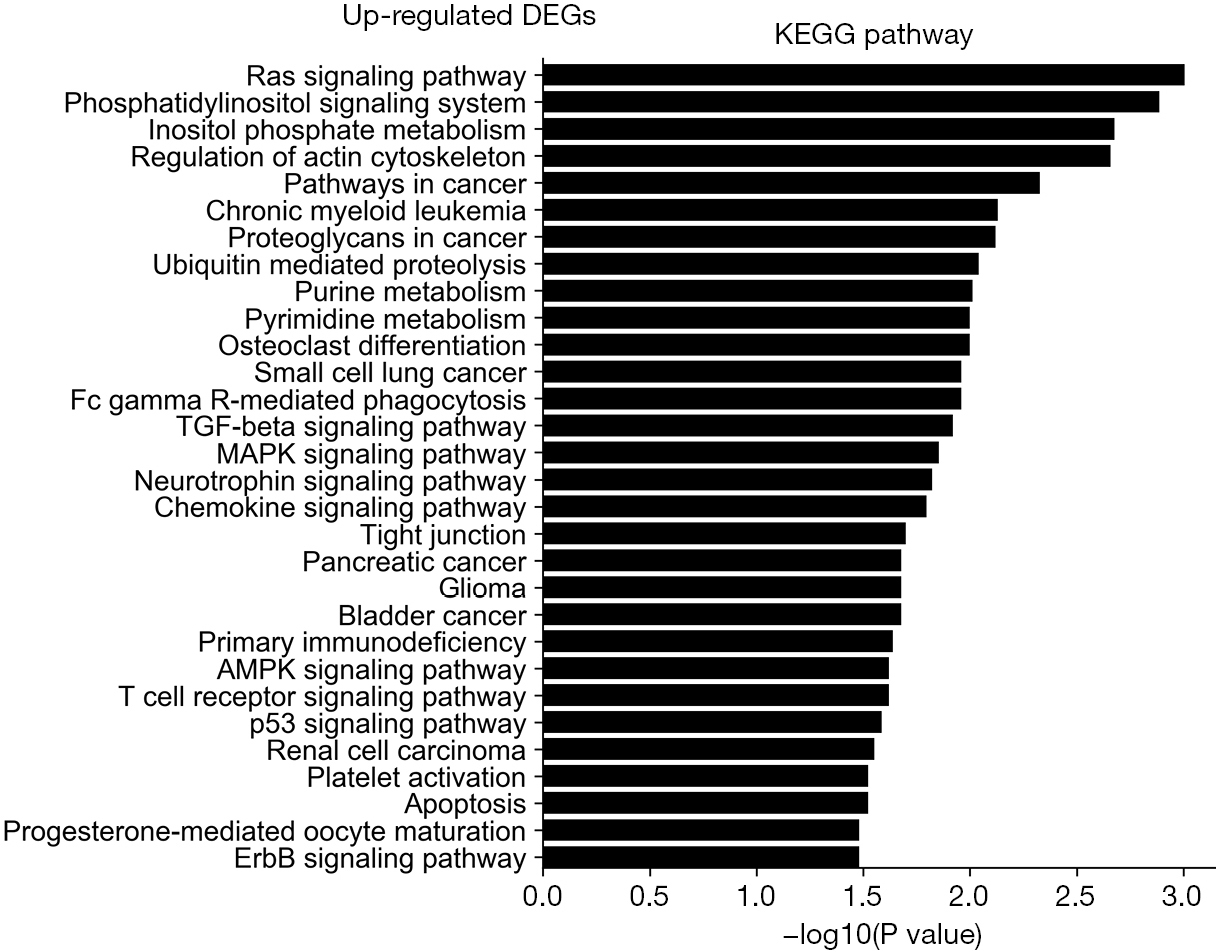 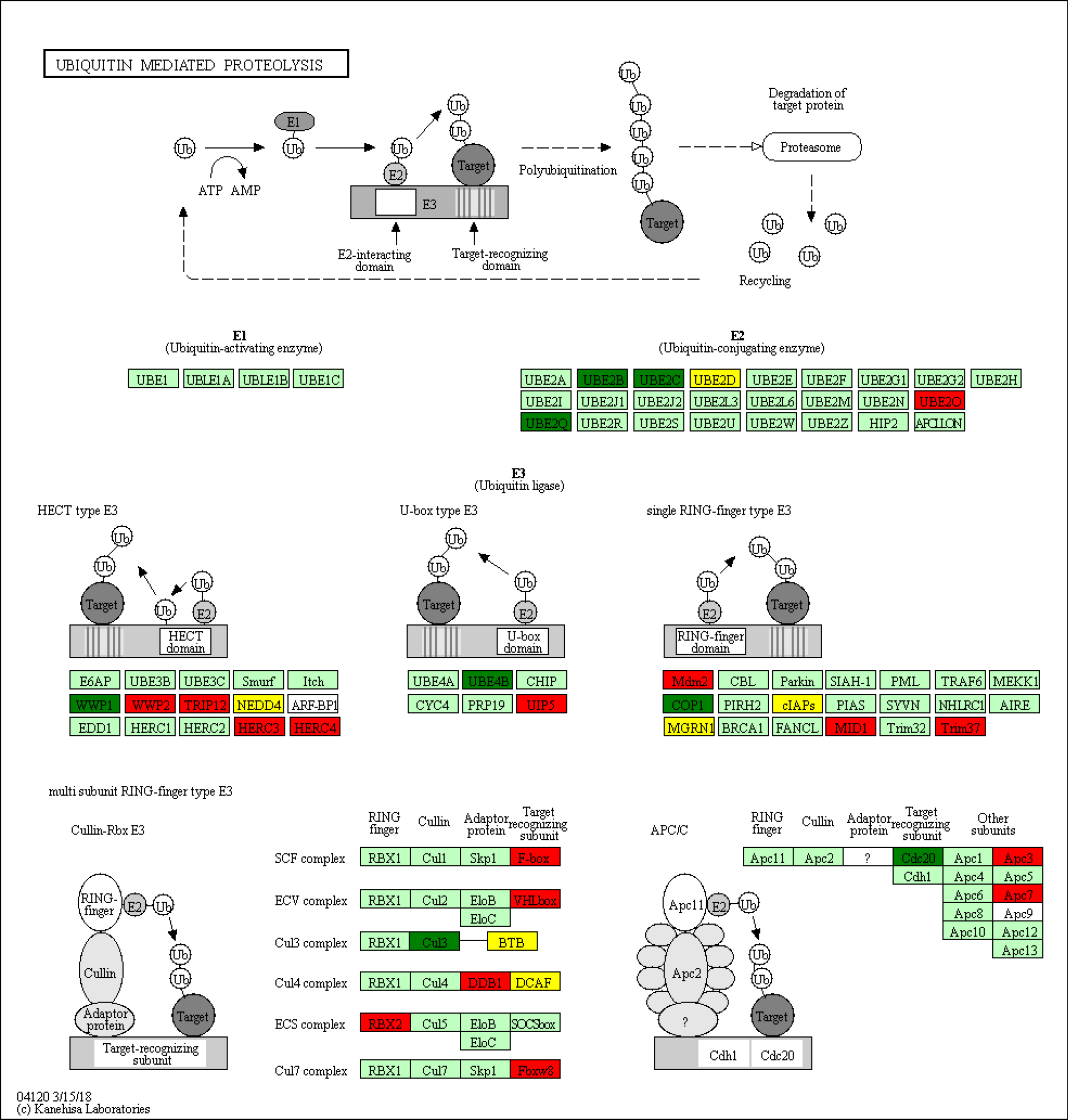 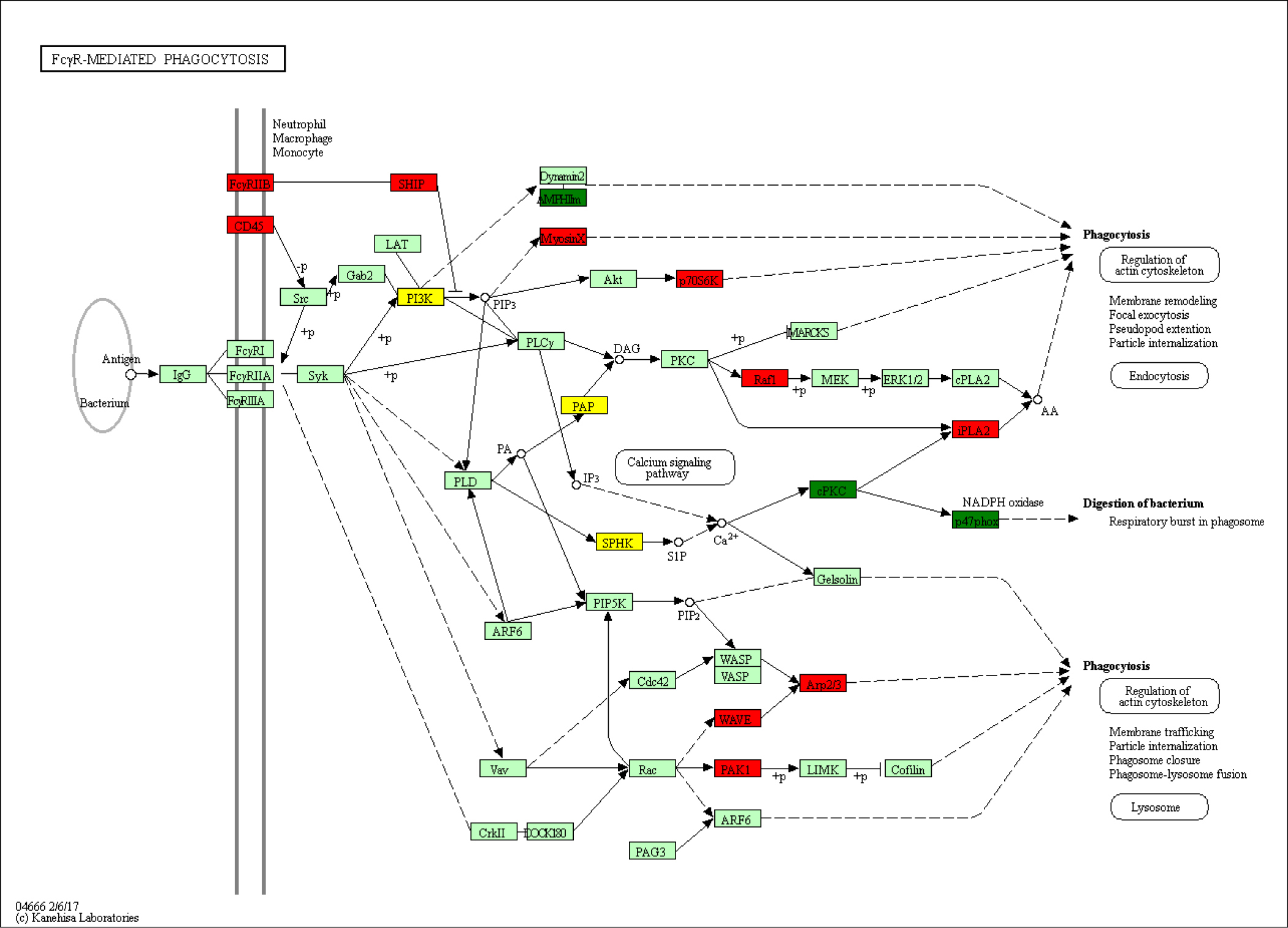 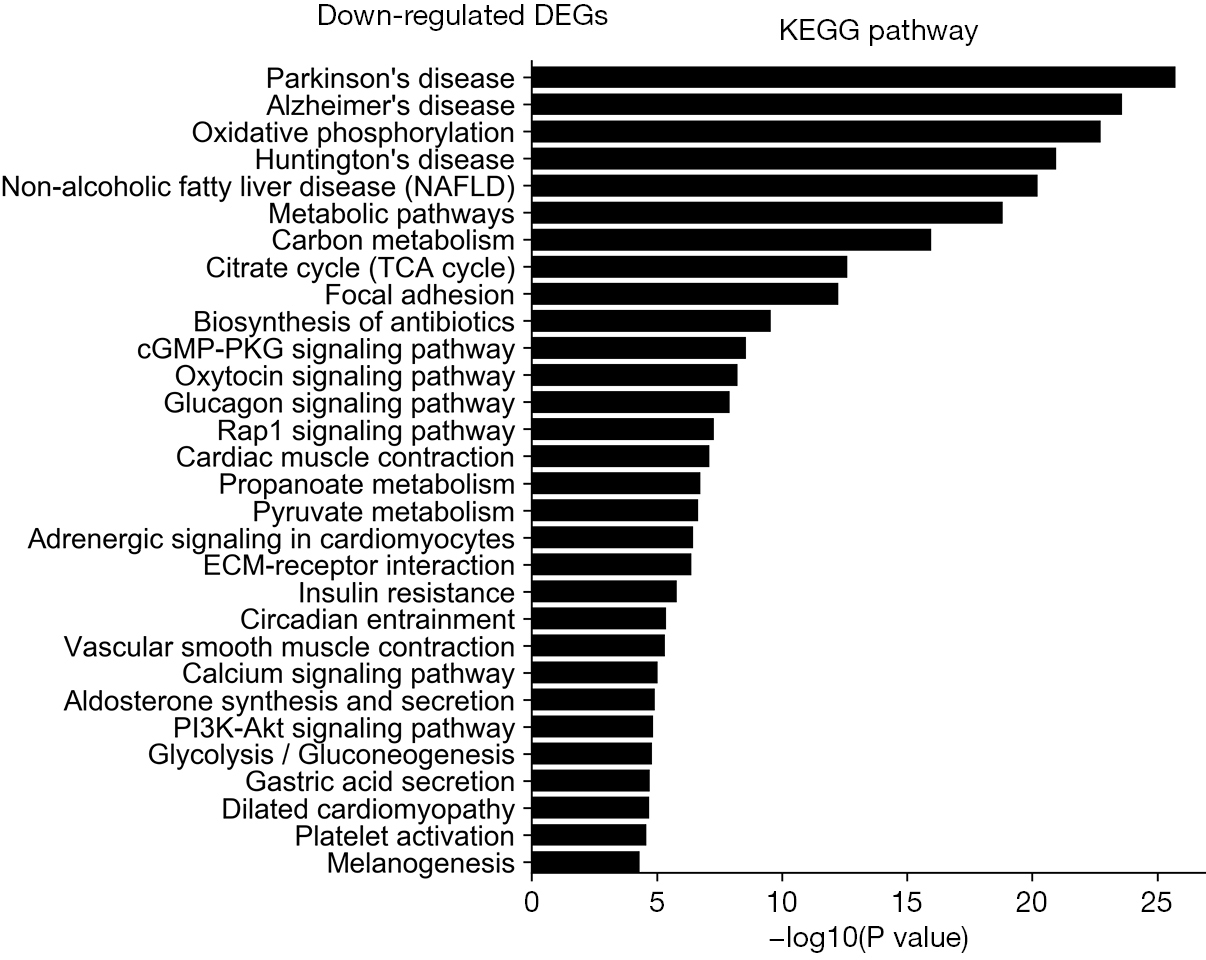 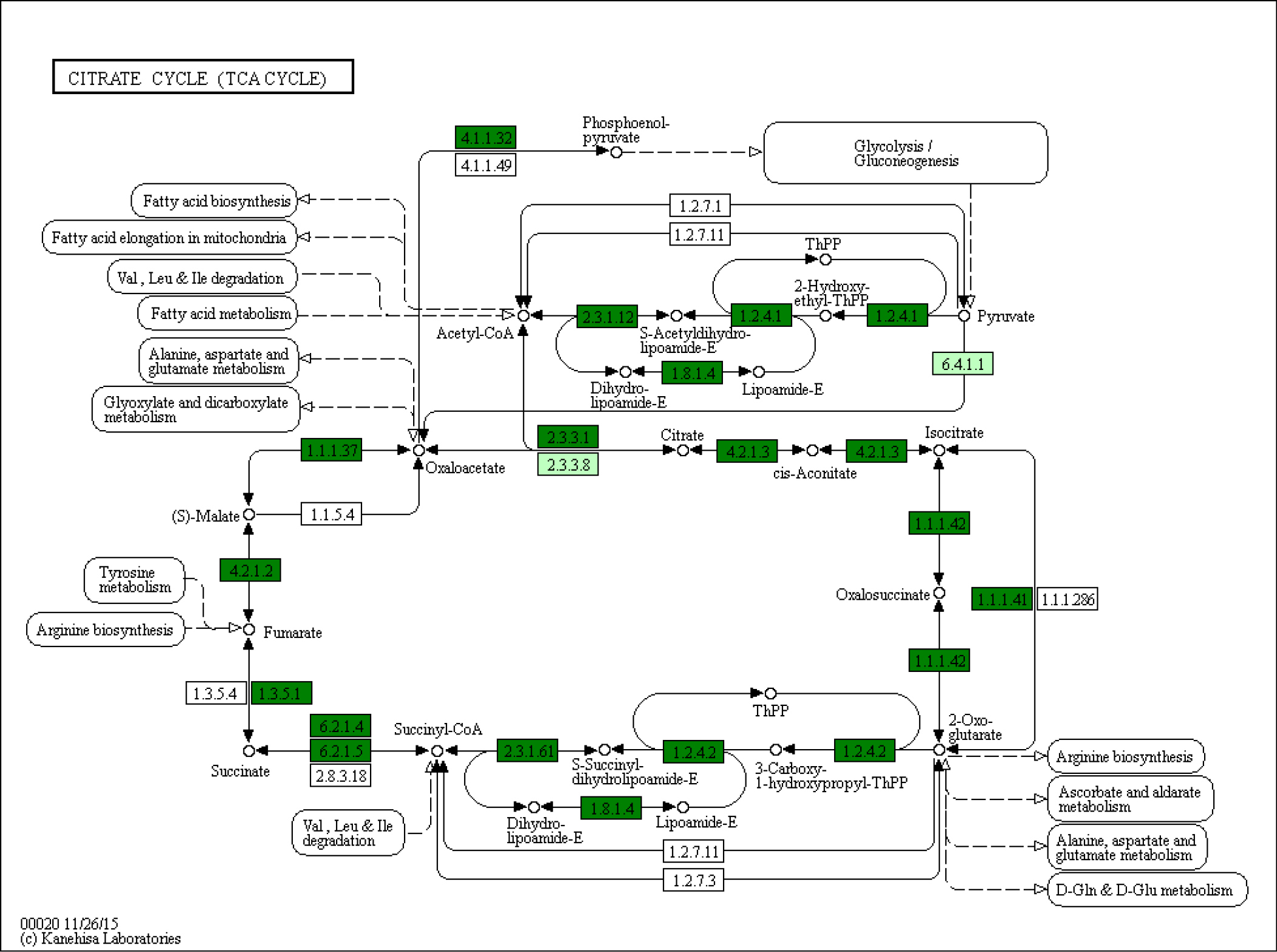 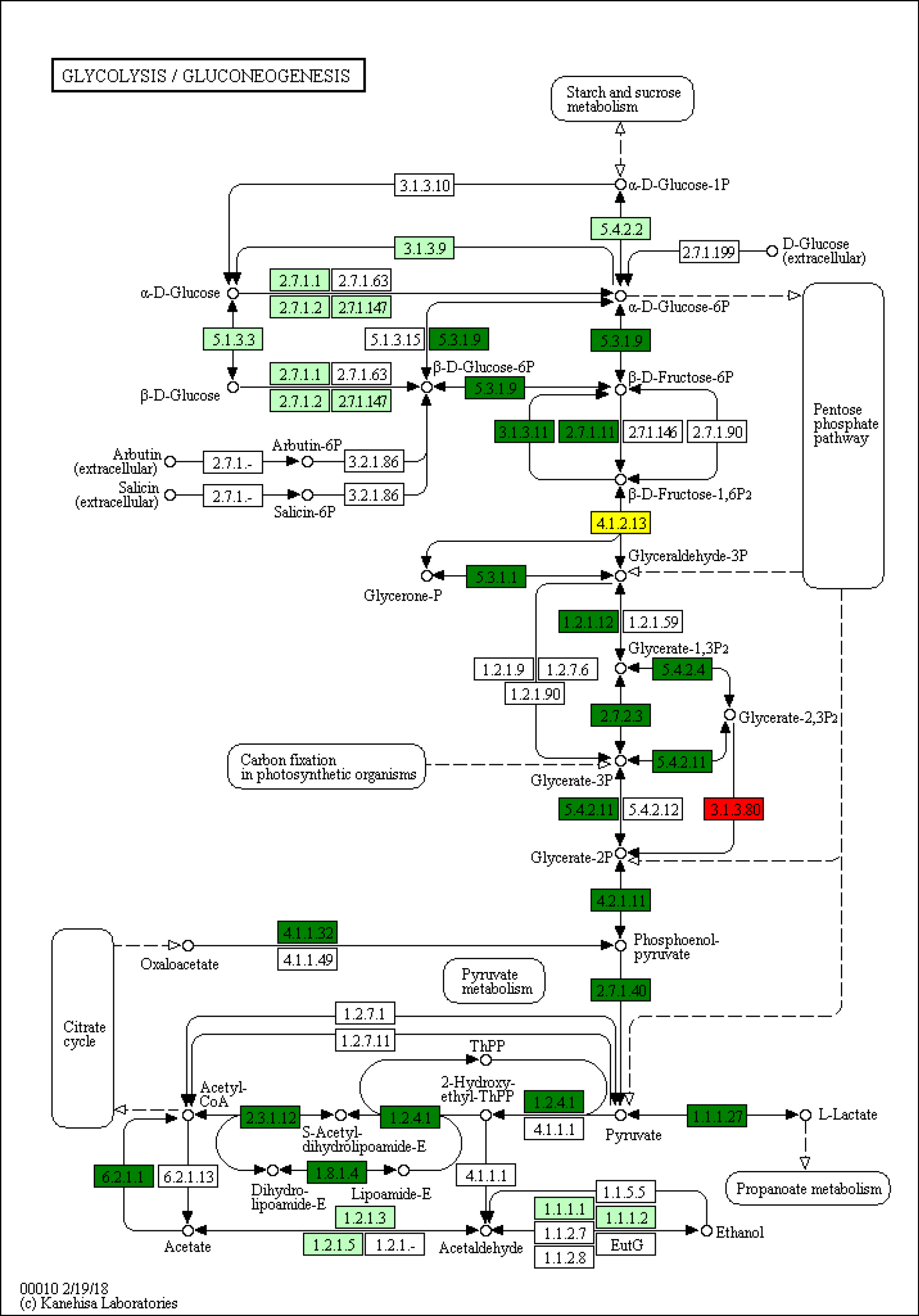 The molecular mechanism of denervation atrophy remains unclear. The transcriptome sequencing analysis suggested that the expression of 5,690 transcripts in TA muscle changed at 14 days after denervation. A total of 2,749 transcripts were up-regulated, and 2,941 transcripts were down-regulated in denervated TA muscles after 14 days of denervation. The GO and KEGG enrichment analyses were used to analyze the DEGs, revealing some interesting aspects about gene regulation of skeletal muscle atrophy.

Biological process analysis showed that apoptosis and ubiquitination proteolysis system was widely activated in denervated TA muscles after 14 days of denervation. Cellular component analysis showed the up-regulated expressed genes in denervated skeletal muscle mainly occurred in cytoplasm, cytoskeleton, and nucleus. Molecular function analysis suggested that the up-regulated expressed genes in denervated skeletal muscle mainly involve in protein binding, ubiquitin-protein transferase activity, and hydrolase activity. The KEGG enrichment analysis showed that ubiquitin mediated proteolysis, Fc gamma R-mediated phagocytosis, TGF-β signaling pathway, MAPK signaling pathway, chemokine signaling pathway, AMPK signaling pathway, apoptosis, and p53 signaling pathway were enriched in denervated muscles. From GO and KEGG enrichment analyses, we found that the up regulated expressed genes mainly occur in cytoplasm and cytoskeleton, have ubiquitin protein transferase activity and hydrolase activity, participate in ubiquitination proteolysis, and involve mainly ubiquitin mediated proteolysis, Fc gamma R-mediated phagocytosis, and TGF-ß signaling pathway. These results are consistent with those of previous studies. The UPS is important for muscle homeostasis and health (21). Now, many studies have shown that UPS impairment affects not only matured muscle fibers, but also muscle stem cells (21). This ubiquitination enzymatic cascade, including ubiquitin E1 (activating enzyme), ubiquitin E2 (conjugating enzyme), and ubiquitin E3 (ligase), is very important for the activation of UPS. The UPS is one of the major pathways that mediate proteolysis in muscle. Many UPS genes were activated in skeletal muscle atrophy (22). Atrogin-1 and MuRF-1 are 2 muscle specific E3 ubiquitin ligases that are important regulators of ubiquitin-proteasome system in skeletal muscle (23,24). Low nutrients, disuse, systemic inflammation, unloading, chronic kidney disease (CKD), cancer, or ageing provoke a catabolic state characterized by enhanced muscle proteolysis (25,26). Our previous study also found that the expression of Atrogin-1 and MuRF-1 was significantly increased in denervated skeletal muscle, which played an important role in the degradation of muscle protein (11,14,18). The sequencing results of this study found that ubiquitin-conjugating enzyme E2O (UBE2O), WW domain containing E3 ubiquitin protein ligase 2 (WWP2), thyroid hormone receptor interactor 12 (TRIP12), HECT and RLD domain containing E3 ubiquitin protein ligase 3/4 (HERC3/4), ubiquitin-conjugating enzyme 7- interacting protein 5 (UIP5), MDM2 proto-oncogene (Mdm2), midline 1 (MID1), and tripartite motif-containing 37 (Trim37) were up-regulated in denervated skeletal muscles, which confirmed the important role of ubiquitin-mediated proteolysis in the process of denervation-induced muscle atrophy. Berardi et al. found that increased auto-phagocytosis results in muscle wasting in cachexia (27). Recently, lysosomes, containing many hydrolases and proteases, have been considered to play an important role in maintaining tissue homeostasis, mainly through autophagy, phagocytosis, and endocytosis (28). The ALS plays a key role in protein degradation in skeletal muscle cells (29,30). It is widely activated during muscle atrophy and leads to muscle mass loss in varying degrees (28). Our previous study also found that ALS is widely activated in the process of denervation-induced muscle atrophy (6,12,14). The results of this study also confirm our previous results. Our study showed that ubiquitin-proteasome system and autophagy lysosomal system are activated in the process of denervation-induced muscle atrophy, but the trigger factors that initiate their activation are not yet clear. Our previous studies suggested that oxidative stress and inflammation may be the trigger factors for activation of the ubiquitin-proteasome and autophagy lysosomal systems (6,18,31). Further studies are needed to confirm the possible molecular mechanism.

In conclusion, there are a multitude of DEGs in skeletal muscle after denervation. The DEGs mainly involve in proteolysis, apoptosis, ageing, energy metabolism, angiogenesis, and protein synthesis. This study not only enriched the molecular regulation mechanism of denervation-induced muscle atrophy, but also provided a potential molecular target for the prevention and treatment of muscle atrophy.

Funding: This work was supported by the National Natural Science Foundation of China (Nos. 82072160 and 81901933), the Major Natural Science Research Projects in Universities of Jiangsu Province (No. 20KJA310012), Nantong Social Development Fund (MSZ19179), and Nantong University Doctoral Research Start up Fund project (18B15).

Reporting Checklist: The authors have completed the ARRIVE reporting checklist. Available at http://dx.doi.org/10.21037/atm-21-1230

Conflicts of Interest: All authors have completed the ICMJE uniform disclosure form (available at http://dx.doi.org/10.21037/atm-21-1230). The authors have no conflicts of interest to declare.

Ethical Statement: The authors are accountable for all aspects of the work in ensuring that questions related to the accuracy or integrity of any part of the work are appropriately investigated and resolved. Animal experiments were carried out in accordance with the institutional animal care guidelines and approved by the Administration Committee of Experimental Animals, Jiangsu Province (20180305-004).