Hormone therapy is the primary treatment in patients with hormone receptor positive (HR+) and human epidermal growth factor receptor 2 negative (HER2−) advanced breast cancer (ABC) (1). However, resistance through diverse mechanisms is eventually inevitable, leading to treatment failure and disease progression for patients (2-4). Immense progress has been reached in HR+/HER2− ABC since the approval of cyclin-dependent kinase (CDK)4/6 inhibitor (CDK4/6i), palbociclib, in 2015, according to data from the PALOMA-1 trial (5,6).

CDK4/6i works by inhibiting the interaction of cyclins 4 and 6 with cyclin D, thus arresting the hyperphosphorylation of retinoblastoma (Rb) and blocking progression from G1 to S phase of the cell cycle, thereby inhibiting transcription in turn (7,8). Many phase III randomized trials have demonstrated the effectiveness of CDK4/6i in both first-line (9-12) and endocrine-resistant settings (12-14). Palbociclib, a first-in-class CDK4/6 inhibitor, was approved for the treatment of HR+/HER2− ABC. The most common adverse effects of palbociclib are neutropenia, leukopenia, and fatigue (10). In the PALOMA-3 and PALOMA-2 trials, grade 3–4 neutropenia occurred in 62.0% and 66.4% of patients, respectively, while febrile neutropenia occurred in only 1.8% and 0.6% of patients, respectively (11,12,15).

Although evidence based on randomized trials is the gold standard (16), its translation to clinical practice can be problematic. In the palbociclib randomized trials, most of patients had relapsed after no more than one line of chemotherapy or the patients were even treatment naïve, while the majority of patients randomized to the placebo cohorts never had palbociclib at the late line. Furthermore, the data from real-world studies have revealed an inferior benefit of CDK4/6i in heavily pretreated patients when compared to the data reported in prospective trials (17,18), which suggest that patient selection may be a determinant cause behind outcomes of the clinical trials. Additionally, adherence to dose modification guidelines in clinical trials is presumably higher than that in clinical practice, with the prognostic implications of this difference being largely unexplored. Finally, no robust predictive or prognostic biomarkers which may guide clinical medication have been explored in the randomized trials of palbociclib (19).

The PALOMA-3 trial found that high progesterone receptor (PR) expression (performed by H-score) was related to superior benefit, independent of the treatment cohort (20). Also, retinoblastoma protein (Rb)-negative cases have been shown to have high Ki67 levels (21). In addition, Palleschi et al. (22) revealed that the progression-free survival (PFS) of patients with CDK4/6i and endocrine therapy was inversely related to Ki67 expression, but not to PR. Thus, studies concerning the predictive significance of Ki67 and PR for CDK4/6i are rare and controversial. In this retrospective study, we used immunohistochemistry (IHC) to evaluate the prognostic role of the values of Ki67 (proliferative index) and PR, with PFS being considered the main measure.

We present the following article in accordance with the REMARK reporting checklist (available at http://dx.doi.org/10.21037/atm-21-1340).

This was a retrospective cohort study of metastatic or locally advanced and unresectable HR+/HER2− BC patients initiating treatment with palbociclib in combination with hormone therapy in the 2-year interval following approval of palbociclib in China. A total of 150 patients were identified in the Cancer Hospital of the University of Chinese Academy of Sciences/Zhejiang Cancer Hospital. This retrospective study was conducted in line with accepted ethical standards and was approved by the Medical Scientific Committee of Cancer Hospital of the University of Chinese Academy of Sciences/Zhejiang Cancer Hospital (No. IRB-2021-19). All procedures performed in this study involving human participants were in accordance with the Declaration of Helsinki (as revised in 2013). Individual consent for this retrospective analysis was waived. Only 81 patients, those who received rebiopsy of metastatic lesions and had Ki67 results, were enrolled in the present analysis. Data were collected through the institution’s electronic medical record database. Patients who had undergone least one cycle of palbociclib between 10 August 2018 and 31 August 2020 and who were aged 18 years or older at initiation of palbociclib were included. Patients were excluded from the study if any of the following conditions were present: (I) non-breast cancer; (II) palbociclib treatment as part of a clinical trial or prescription prior to 10 August 2018; or (III) no record of concomitant treatment with aromatase inhibitors (AIs) or fulvestrant; (IV) no results of Ki67 status of metastasis.

Estrogen receptor (ER), PR, and Ki67 were evaluated by IHC, in line with European Quality Assurance guidelines. HER2 evaluation was performed by HercepTest (Dako Corporation) or fluorescence in situ hybridization (FISH) using the dual color FISH–PathVysion kit (Kanglu) at Zhejiang Cancer Hospital. Immunostaining was conducted with the Ventana Benchmark XT system and the Ultraview DAB Detection Kit (Ventana Medical Systems). Confirm anti-ER (Clone SP1, Dako), confirm anti-PR (Clone PgR636, Dako), and Ki67 (Clone Mib-1, Dako,) antibodies were used. Sections were automatically counterstained with hematoxylin II (Ventana Medical Systems) for 16 minutes. External negative and positive controls were taken for each test. Positivity was examined and semiquantitatively quantified as the percentage between immunopositive neoplastic cells and the whole neoplastic cells. HR and HER2 status were defined by the American Society of Clinical Oncology (ASCO)/College of American Pathologists guidelines (23,24). In particular, the cutoff for ER positivity and PR positivity was set at ≥1% immunoreactive cells. Ki67 and PR were analyzed both as continuous and dichotomized variables; i.e., low (<14%) vs. high (≥14%) for Ki67, low (<20%) vs. high (≥20%) for PR in accordance with the St. Gallen guidelines (25) and low (<30%) vs. high (≥30%) for Ki67 according to the Guidelines of the Chinese Society of Clinical Oncology (CSCO) on Diagnosis and Treatment of Breast Cancer 2020.

HER2 status was conducted using the HercepTest, which measures the percentage of immunoreactive tumor cells according to the intensity and completeness of membrane staining and with the 0–3+ recommended criterion. Cases scored as 3+ were defined as HER2+. In cases with a score of 2+, a FISH test was conducted. HER2 status was considered positive if the HER2 gene–chromosome 17 centromere ratio was ≥2 or if the average HER2 gene copy number/cell was ≥6 according to FISH.

The follow-up period was defined as the time from initiation of one regimen to the earliest disease progression, death, or last medical record. The median follow-up period was evaluated by the reverse Kaplan-Meier method. The Kaplan-Meier method was performed to estimate PFS, and survival curves were compared using the log-rank test (26). Results were considered statistically significant with a P value <0.05. Analyses were conducted with SPSS (version 22.0, IBM Corp.) and the GraphPad Prism software (version 5, GraphPad Software Inc.). 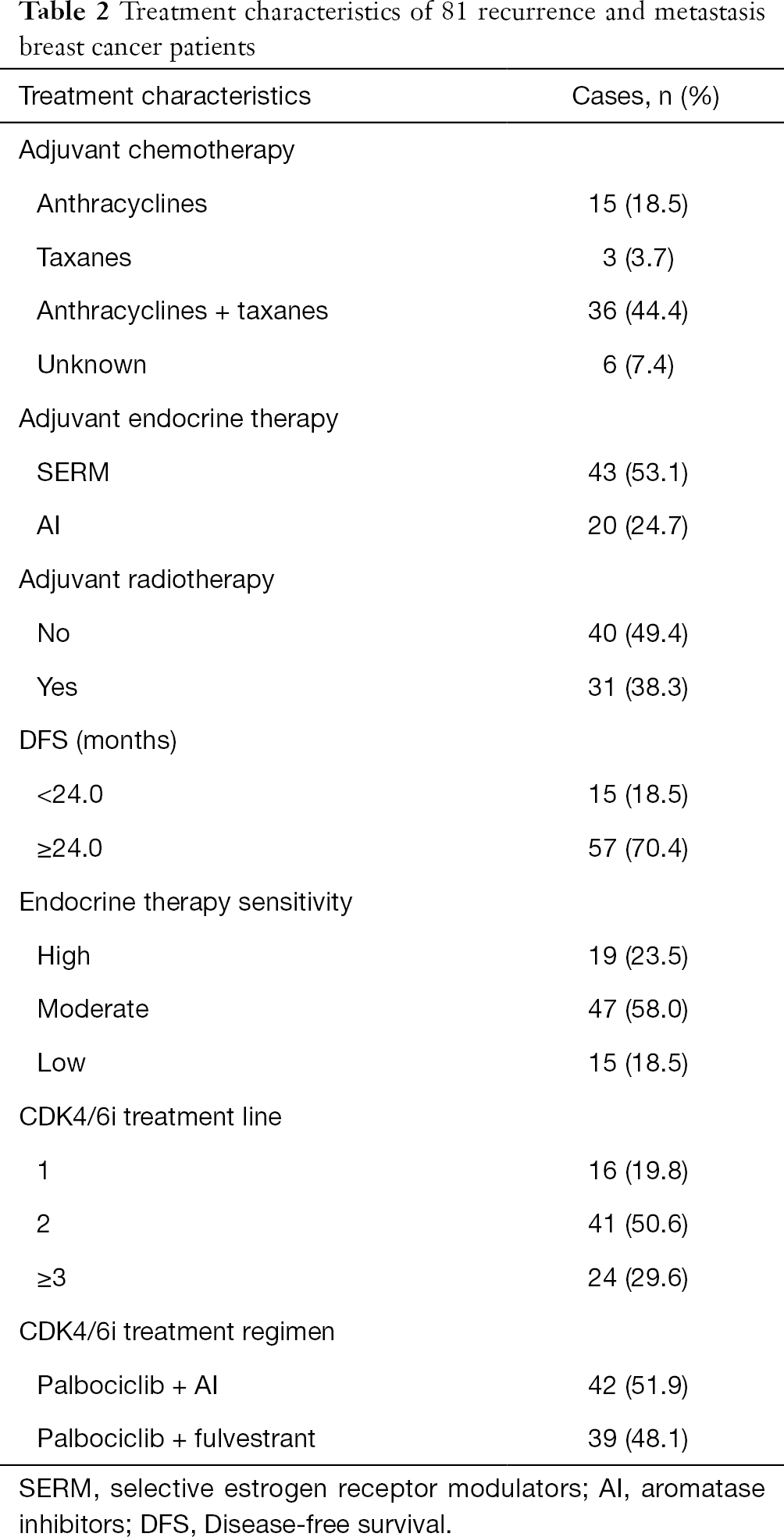 Efficacy of palbociclib treatment according to different Ki67 and PR status 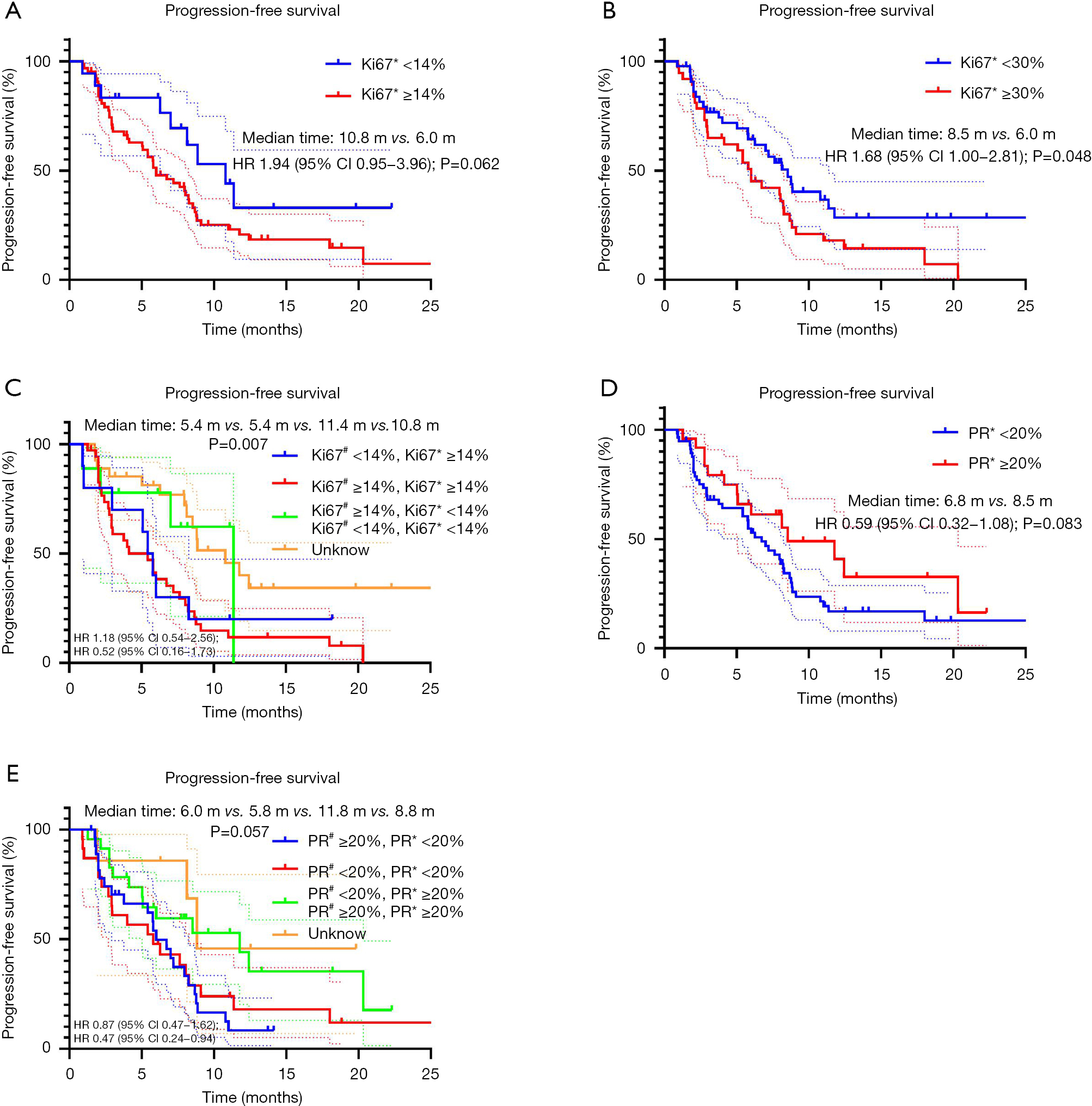 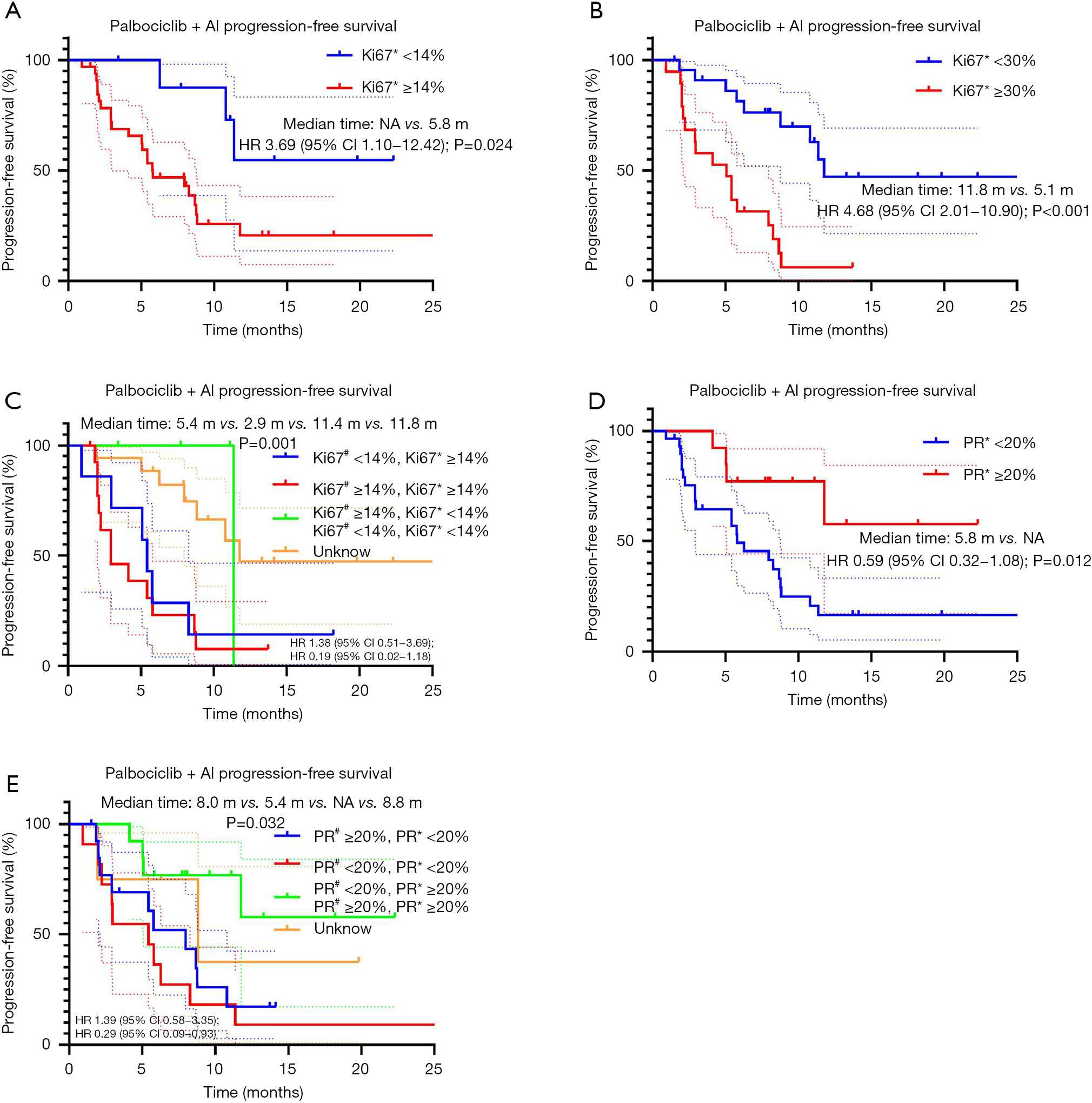 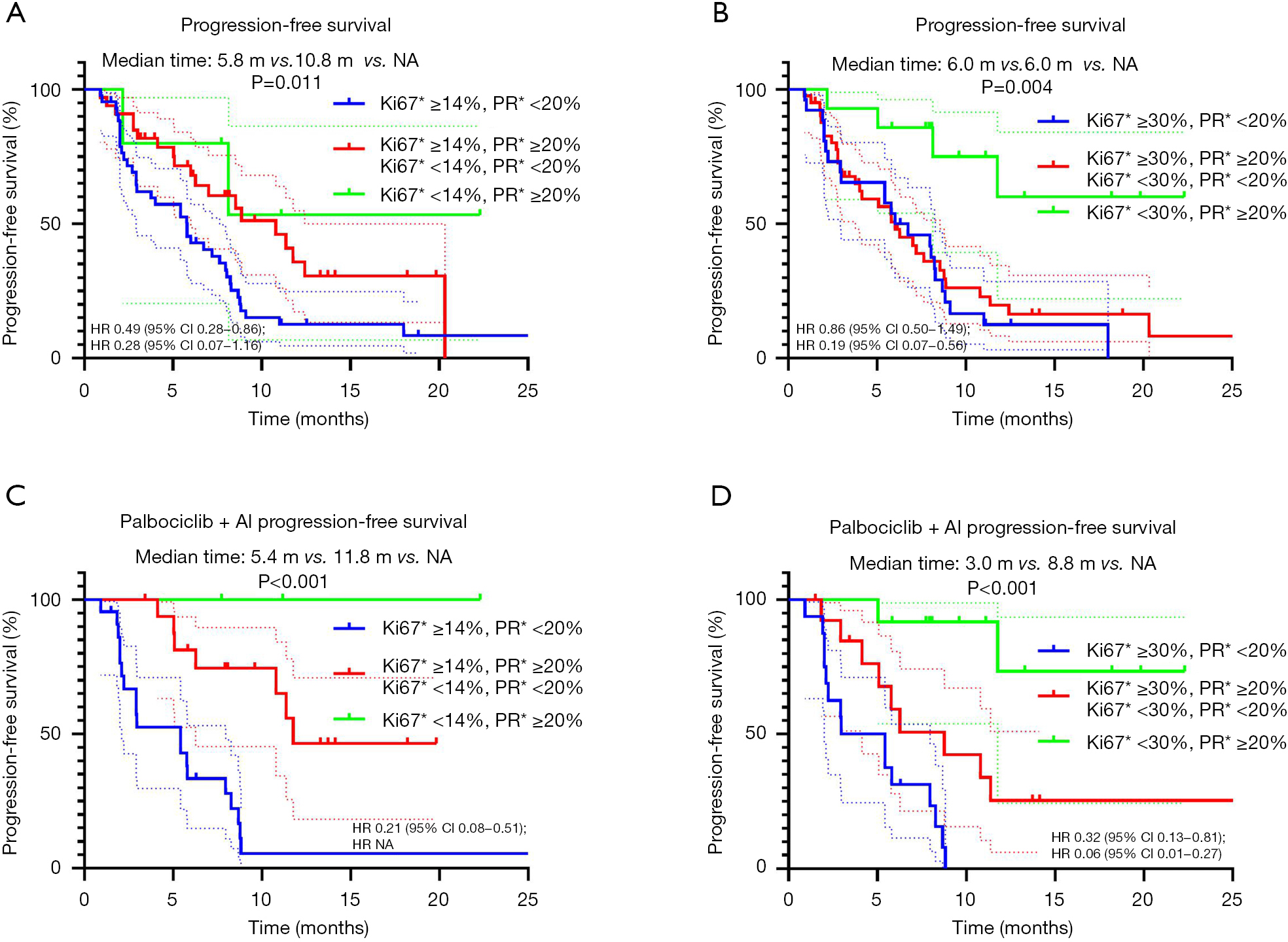 Palbociclib has demonstrated excellent clinical outcome in the data from the United States and Europe in the real-world setting with various treatment patterns and patient characteristics (27-31). In addition, the clinical benefit rates of palbociclib plus letrozole or fulvestrant demonstrated in the Ibrance Real World Insights (IRIS) study were all more than 90%, regardless of the treatment line, which were better than the results of the PALOMA studies (85% in PALOMA-2 and 67% in PALOMA-3) (28,30). In addition, Asian patients were shown to receive greater benefit in PFS from CDK4/6i and endocrine therapy (32). Although these results are promising, the clinical practice of CDK4/6 inhibitors is confounded by the high individual variability in clinical response. At the current time, no clinically available biomarkers, other than ER expression, which is mostly derived from primary tissue, are used to prescribe CDK4/6 inhibitors (33-37). In addition, the ER–PR discordance between primary tumor and metastatic lesions is common and may reach approximately 32%, leading to changes in treatment sensitivity (38). The present study represents the first retrospective real-world analysis demonstrating the correlation between Ki67and PR values of metastatic lesions and PFS in ABC patients with palbociclib plus hormone therapy.

A large-pooled America Food and Drug Administration (FDA) group analysis showed that ER positivity was the best predictor of CDK4/6i and hormone therapy (19). However, PR status was not suggested as a predictive biomarker in the same pooled study (19). Another exploratory analysis revealed that tumor grade, PR expression, performance status, liver metastases, bone-only disease, disease-free interval from completion of adjuvant hormone therapy, and duration from first diagnosis to relapse had a prognostic significance. The research further indicted that prognostic biomarkers were significantly associated with receiving the greatest benefit from the combination of another CDK4/6i (39).

A great many of prospective and retrospective studies have demonstrated a compatible correlation between elevated Ki67 levels and inferior benefit from chemotherapy in breast cancer. For neoadjuvant therapy, numerous trials have suggested a significant relationship between raised Ki67 values and outcome for chemotherapy, as assessed by pathological and clinical response (40). In addition, several neoadjuvant hormone therapy studies have demonstrated that treatment-induced conversion in Ki67 could predict response and clinical outcome, even with short-term treatment (41,42). The monarchE trial presented in the 2020 San Antonio Breast Cancer Symposium (SABCS) showed that in the abemaciclib combined with adjuvant endocrine therapy setting, patients with high Ki67 achieved a statistically significant improvement in invasive disease-free survival (iDFS). However, little research has been carried out concerning the ability of Ki67 to predict the clinical outcome for hormone therapy or chemotherapy in a metastatic setting. Meanwhile, Ki67 value was not indicated to be a prognostic factor for response to CDK4/6i in a series of prospective trials. Only 1 retrospective study reported that PFS was negatively affected by elevated Ki67 values (22). The key challenge in Ki67 research is the poor interlaboratory assay reproducibility due to the diversity in diagnosis kits and platforms being used. Moreover, various cutoffs and score analyses have been applied throughout years of research (40,43). In a metastatic setting, increased PR was shown to be independently associated with a long time-to-progression (TTP) in patients with hormone therapy, whereas Ki67 was not (44). In addition to this, the PALOMA3 study indicated that high PR level is correlated with superior outcomes in patients with either placebo and fulvestrant or palbociclib combined with fulvestrant, independent of the treatment cohort (20). Ki67 has also been reported to be related to phosphorylated retinoblastoma protein (Rb) in Rb-proficient breast cancer (BC), with Rb-negative BC being associated with increased Ki67 values (21). Consequently, these Rb-deficient BC cases with high proliferative activity are speculated to be resistant to CDK4/6i (45).

In addition, 10 patients underwent second-generation sequencing (NGS). This reveal that 7 patients with PIK3CA mutation had a PFS of only 3.0 months which was markedly shorter than that of the whole cohort which was 8.0 months. Two of the patients who progressed from AI treatment had an ESR1 mutation and received palbociclib plus fulvestrant, as ESR1 mutation is one of the main causes of AI resistance (47).

Despite its retrospective nature and the lack of a control cohort, our data reflect a real-world patient cohort which greatly differs from the populations included in most clinical trials. As Ki67 and PR detection is easily available, economical, and practical, the predictive role of Ki67 and PR on PFS in palbociclib treatment may be widely applicable and their value merits further confirmation in a prospective study.

Reporting Checklist: The authors have completed the REMARK reporting checklist. Available at http://dx.doi.org/10.21037/atm-21-1340

Conflicts of Interest: All authors have completed the ICMJE uniform disclosure form (available at http://dx.doi.org/10.21037/atm-21-1340). The authors have no conflicts of interest to declare.

Ethical Statement: The authors are accountable for all aspects of the work in ensuring that questions related to the accuracy or integrity of any part of the work are appropriately investigated and resolved. This retrospective study was conducted in line with accepted ethical standards and was approved by the Medical Scientific Committee of Cancer Hospital of the University of Chinese Academy of Sciences/Zhejiang Cancer Hospital (No. IRB-2021-19). All procedures performed in this study involving human participants were in accordance with the Declaration of Helsinki (as revised in 2013). Individual consent for this retrospective analysis was waived.