Macular corneal dystrophy (MCD, MIM 217800), a rare autosomal recessive corneal disease, is characterized by bilateral progressive scattered stromal clouding, irregular gray-white corneal opacities, and central corneal thinning. The late stage of vision loss requires corneal transplants (1-3). The prevalence of MCD is estimated to be 9.7/1,000,000, with different distribution frequencies worldwide. The prevalence is 1.2/1,000,000 and 7.6/100,000 in America and Iceland, respectively (4,5). The relatively common occurrence in India, Saudi Arabia and Iceland is associated with the high frequency of consanguineous marriage, without involvement of specific environmental or systemic factors (4,5). The onset is usually in the first decade and presents with central superficial irregular whitish corneal opacities. These opacities progressively expand to the corneal periphery, and even to the entire stroma with corneal thinning, resulting in severe vision impairment in middle age (2,6-8). Therefore, early diagnosis and treatment are necessary for MCD. The histopathological characteristics of MCD are typically glycosaminoglycan accumulation in different corneal layers, including the epithelium, Bowman’s membrane, the stroma, Descemet’s membrane, the endothelium, and keratocytes (3,7,9). The different onset ages, disease severity, and non-coding region mutations support that the gene expression may be regulated by epigenetic factor(s) (2,7,9).

In 2000, coding mutations in the carbohydrate sulfotransferase 6 gene (CHST6, MIM 605294) and rearrangements in the upstream region of the CHST6 gene were reported as being responsible for MCD (10,11). The gene encodes corneal glucosamine N-acetyl-6-sulfotransferase (C-GlcNAc6ST), which contains an N-terminal with a short cytosolic tail, a transmembrane domain, and a large Golgi luminal C-terminal domain, belonging to the carbohydrate sulfotransferase family. The C-terminal domain has sulfate donor 3'-phosphoadenosine-5'-phosphosulfate (PAPS) binding sites, a catalytic module and an area that determines carbohydrate specificity in vivo (12-14). The C-GlcNAc6ST functions in the formation of sulfated keratan sulfate (KS), which is transported to the extracellular matrix where it forms some components of the corneal stroma (15). CHST6 mutants lead to accumulation of poorly sulfated or unsulfated KS, resulting in corneal fibril organization malformations and progressive opacification (14,16). Up to now, at least 193 CHST6 gene mutations, including missense, nonsense, deletion, insertion/duplication, deletion-insertion, and complex rearrangement, have been reported in different patients with MCD (1,14,17,18). The homozygous or compound heterozygous mutations in CHST6 gene might be the potential early MCD diagnosis markers (2,3,8-17).

We present the following article in accordance with the MDAR reporting checklist (available at http://dx.doi.org/10.21037/atm-20-7178).

A 37-year-old female diagnosed with MCD was recruited from the Third Xiangya Hospital, Central South University (Changsha, China). The study was conducted in accord with the Declaration of the Helsinki (as revised in 2013) and approved by the Institutional Review Board of the Third Xiangya Hospital, Central South University, Changsha, China (No.: 2018-S400). Written informed consent was obtained from the female patient. Two ophthalmologists evaluated the patient who underwent a comprehensive ocular examination, including best-corrected visual acuity (BCVA) tests, slit-lamp, confocal microscopy, and optical coherence tomography (OCT) examinations. The clinical diagnosis for MCD was based on the typical corneal features (1). The genomic DNA (gDNA) was isolated from peripheral blood sample of the patient using a phenol-chloroform extraction procedure, as previously described (19-21).

WES of the proband was performed by BGI Genomics, BGI-Shenzhen (Shenzhen, China), as previously described (22,23). The quantified gDNA sample was randomly sheared into fragments by Covaris E220 (Covaris, Inc.) and achieved library fragments between 150 bp and 250 bp. The DNA fragments were repaired by A-tailing reactions and then ligated with adapters. Ligation-mediated polymerase chain reaction (PCR) was used to amplify the fragments, and enrichment was performed after the purification and the hybridization to the exome array. The captured products were amplified by circularization. The qualified captured library was then loaded on the BGISEQ-500 platform. High-throughput sequencing was performed to ensure the average sequencing coverage.

For the potential pathogenic variants identified by WES in the patient, Sanger sequencing was performed subsequently. Primers were designed for candidate variants with Primer3 (http://frodo.wi.mit.edu/primer3/) according to the sequences of the human reference genome (http://genome.ucsc.edu/). The primers were then synthesized by Sangon Biotech (Shanghai) Co., Ltd. Primer sequences were designed as: 5'-GTGTGCAAGCCACTGTGC-3' and 5'-GTGGCTACGGCACACCTC-3'. The sequencing results were analyzed by using Chromas software (v2.01, Technelysium Pty Ltd., South Brisbane, Australia).

The patient complained of bilateral blurred vision, discomfort, tearing, and photophobia as being present for more than twenty years. The patient’s visual acuity was 0.06 in the right eye and 0.04 in the left eye. Vision was not significantly improved with prescription lens glasses. A slit-lamp examination detected multiple, irregular, gray-white opacities from the center of the cornea to the peripheral limbus in the patient (Figure 1A,B). Confocal microscopy examinations revealed the hyper-reflectivity was present in the basal epithelium and the anterior stroma of cornea (Figure 1C,D,E,F). Corneal images of OCT showed the subepithelial and anterior stromal deposits resulting in the thinning of the cornea (Figure 2A,B,C,D). 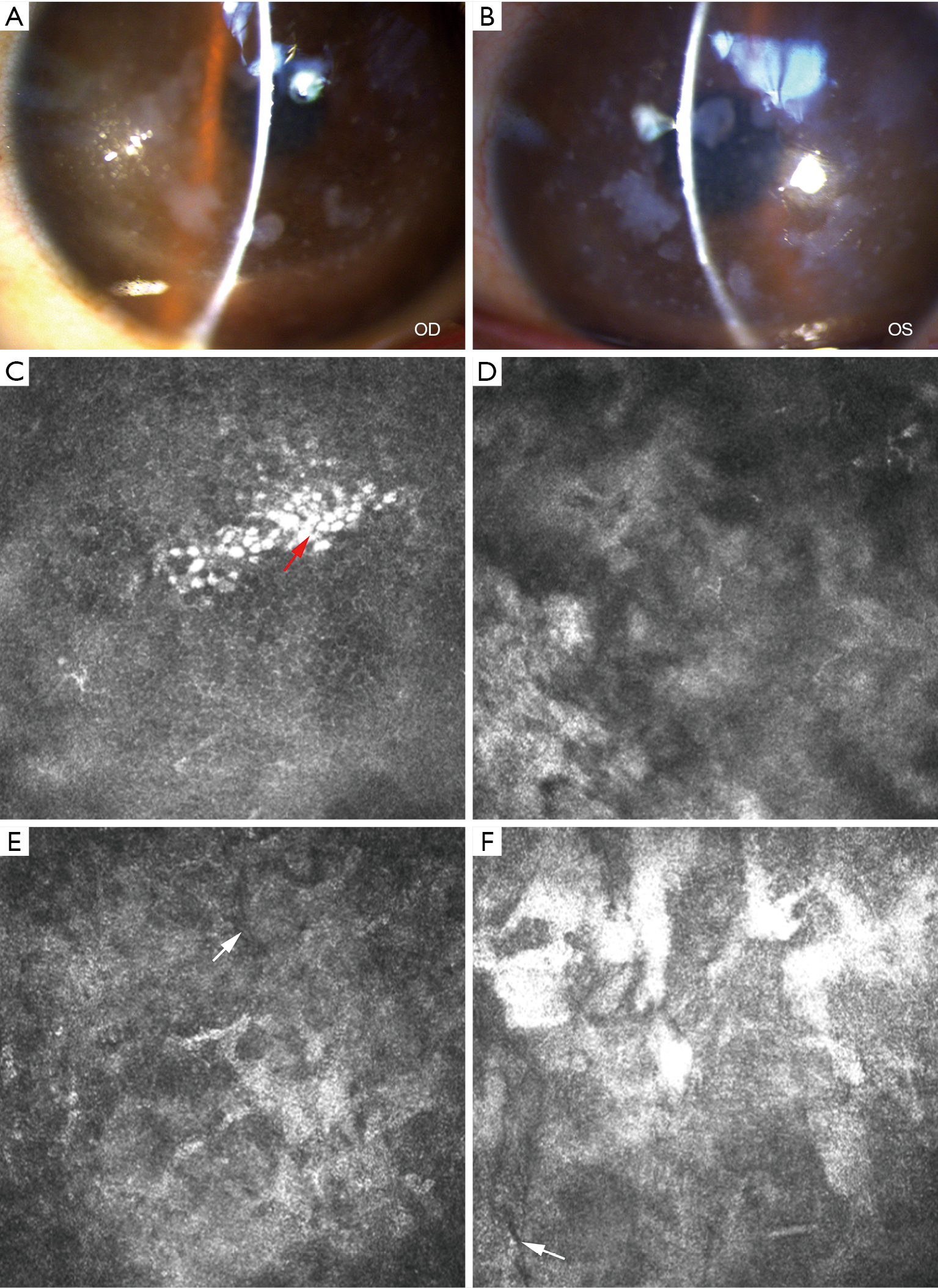 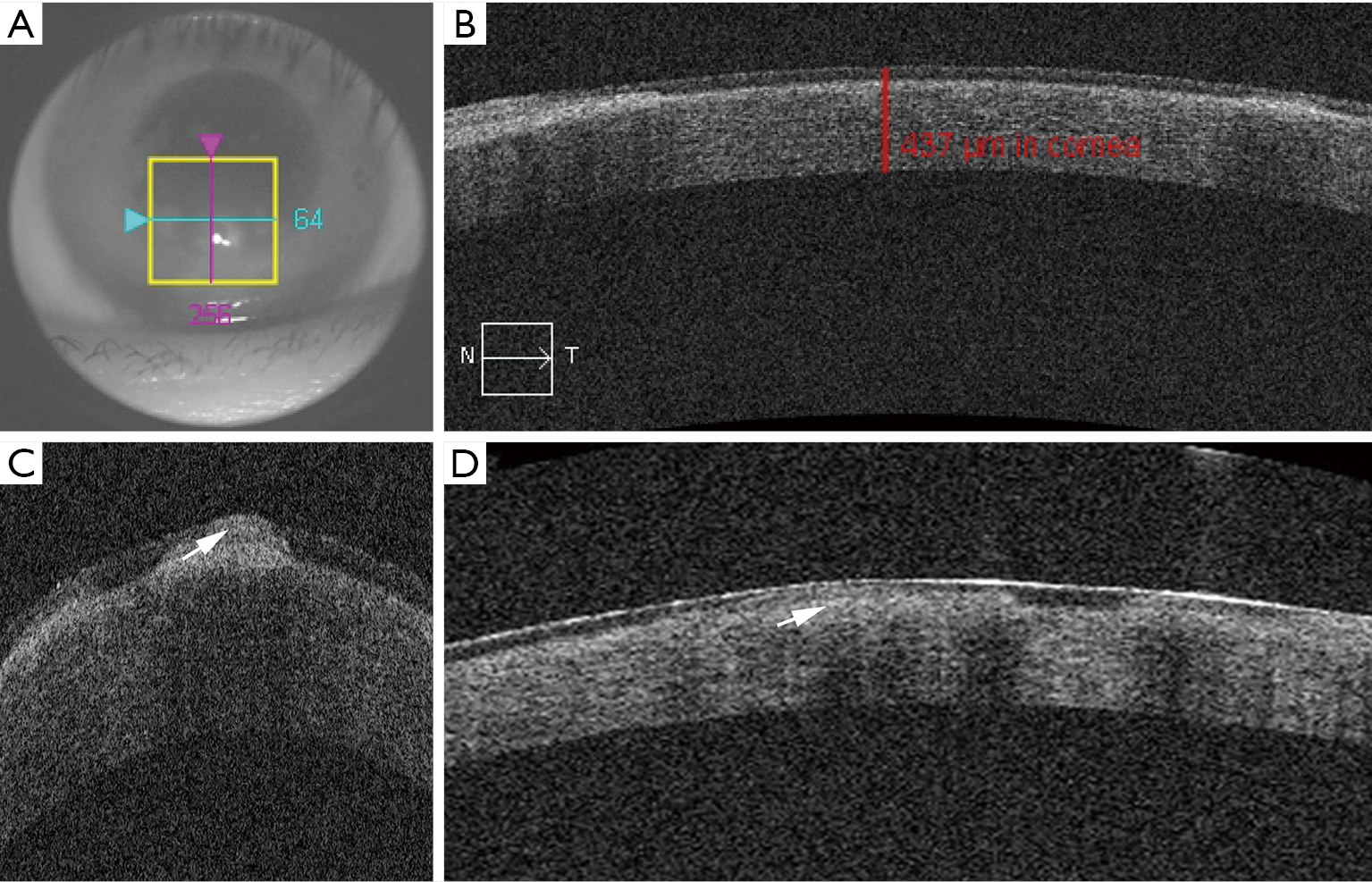 WES and identification of pathogenic mutations

Approximately 126.34 million clean reads and 116.27 million total effective reads were obtained, with 99.91% of the reads mapped to the human reference genome. The mean sequencing depth on target regions was 120.93. The fraction of the target regions covered by 10× or more was 98.98%. A total of 98,802 SNPs and 14,863 Indels were detected in the proband. The compound heterozygous variants (c.544C>T and c.631C>G) in the CHST6 gene, a disease-causing gene for MCD, were prosecuted as the disease-causing factors in the proband, which were absent in 2,471 controls. The c.544C>T variant resulted in a premature stop codon in codon 182 (p.Gln182Ter). The c.631C>G variant led to an arginine-to-glycine substitution (p.Arg211Gly). The prediction analyses of MutationTaster showed that the two variants, c.544C>T and c.631C>G, were disease causing with the score near or equal to 1. The variant, c.631C>G, was predicted to be deleterious by PROVEAN (score: −6.73), damaging by SIFT (score: 0.001), and probably damaging by PolyPhen-2 (score: 1.000, specificity: 1.00, sensitivity: 0.00). The variants were classified as “pathogenic” mutations using the ACMG standards and guidelines for variant interpretation. The CHST6 compound heterozygous variants in the proband were further confirmed by Sanger sequencing (Figure 3A,B,C). Amino acid sequence analysis of the sulfotransferases of different species detected that arginine at mutant site (p.Arg211) was highly conserved (Figure 3D). Structural modeling showed the conformational alteration (Figure 3E). 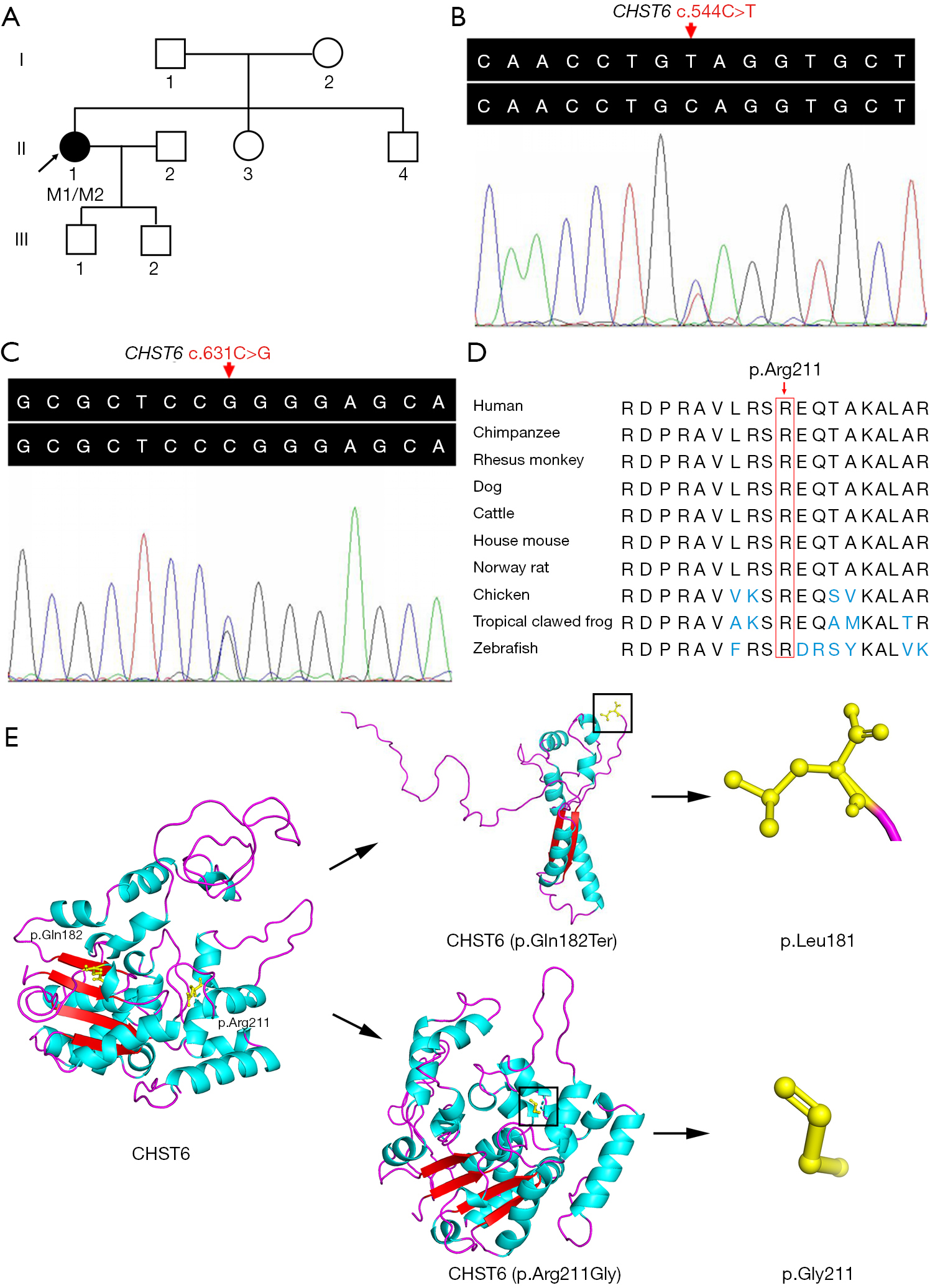 MCD is a stromal corneal dystrophy first described by ophthalmologist Oskar Fehr in 1904 (26). It is characterized by minute irregular gray-white fleck-like opacities deposited in the cornea during the first decade of life. It develops into diffuse multiple nodular opacities and results in severe vision loss over time (7,27). Early diagnosis and following ophthalmologic evaluation, especially in children, should be beneficial for the patients in treatment and management (28).

In this study, a Han-Chinese patient with MCD is described, which has a novel nonsense mutation c.544C>T (p.Gln182Ter) and a validated missense mutation c.631C>G (p.Arg211Gly) in the CHST6 gene detected by both WES and Sanger sequencing. Compound heterozygous mutations may induce the production of truncated and single amino acid altered proteins and result in a typical MCD phenotype. Corneal phenotypes evaluated by slit-lamp, confocal microscopy, and OCT showed no obvious differences between the patient of this study and other previously reported MCD cases, regardless of the mutations involved (9).

The CHST6 gene, located at chromosome 16q23.1, contains 3 exons and encodes a 395-amino acid protein with a molecular weight of 44 kDa (1,13). To date, various CHST6 gene mutations in MCD patients have been reported in different ethnic populations (Figure 4), which suggests strong allelic heterogeneity. In this study, a novel CHST6 nonsense mutation (p.Gln182Ter) in the female patient was identified, which is located in the critical sulfotransferase domain and may generate a truncated and dysfunctional protein product. Nonsense mutations accounted for 10.36% of CHST6 alterations (Figure 4), in which Asian patients comprised a great proportion. For example, ethnic Chinese and Indian sufferers occupied 53.13% and 17.19%, respectively (Table 1, Figure 5). 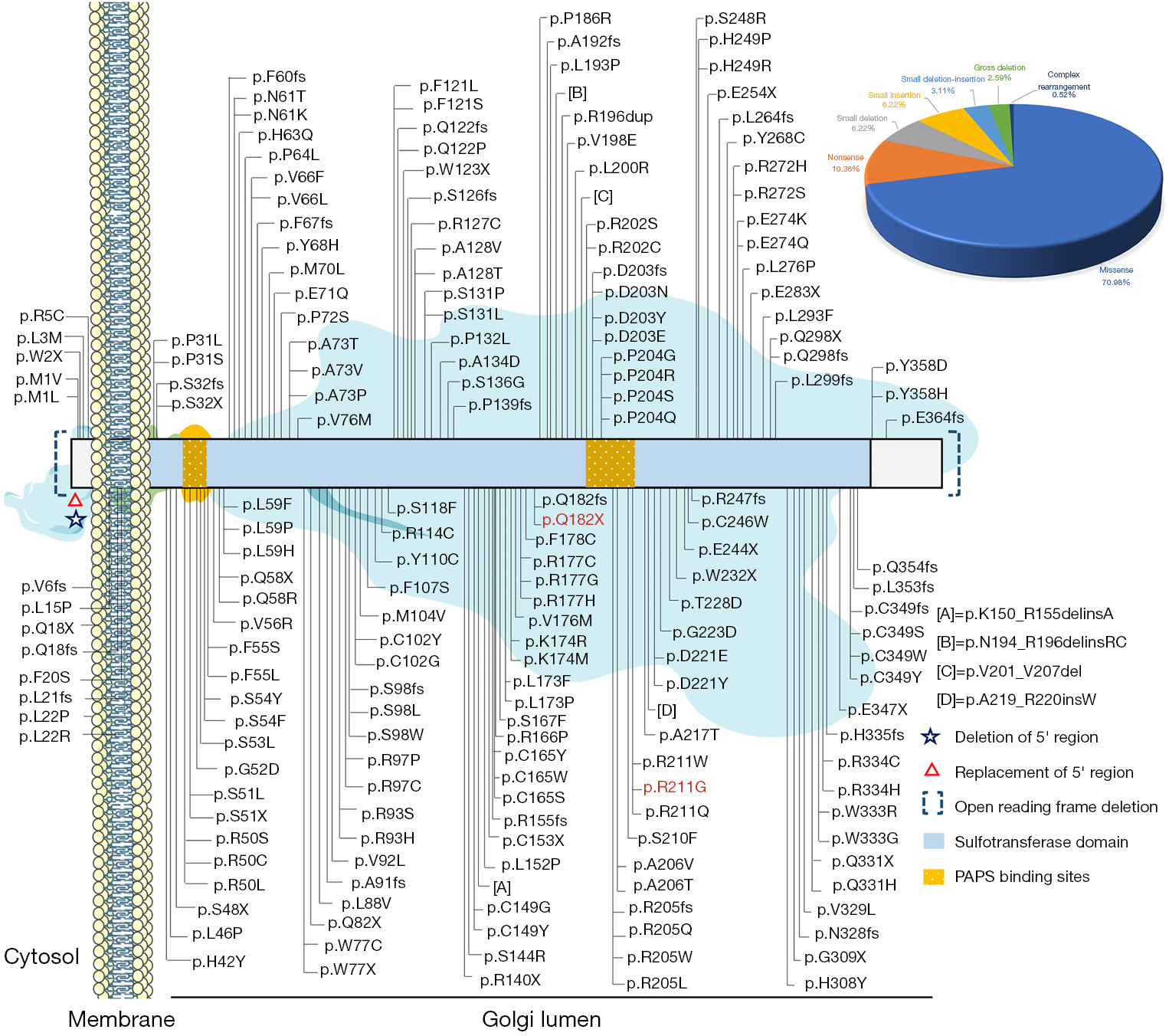 Figure 4 The mutations identified in the CHST6 gene associated with MCD. The schematic diagram annotated with the sulfotransferase domain (residue 42-356) and PAPS binding sites (residue 49-55 and 202-210) and model structure of the CHST6 protein were shown (UniProtKB: Q9GZX3). Small deletion, insertion and deletion-insertion are defined as those changes involving 20 bp or less according to the definition in Human Gene Mutation Database (http://www.hgmd.cf.ac.uk/ac/index.php). CHST6, the carbohydrate sulfotransferase 6 gene; MCD, macular corneal dystrophy; PAPS, 3'-phosphoadenosine-5'-phosphosulfate. 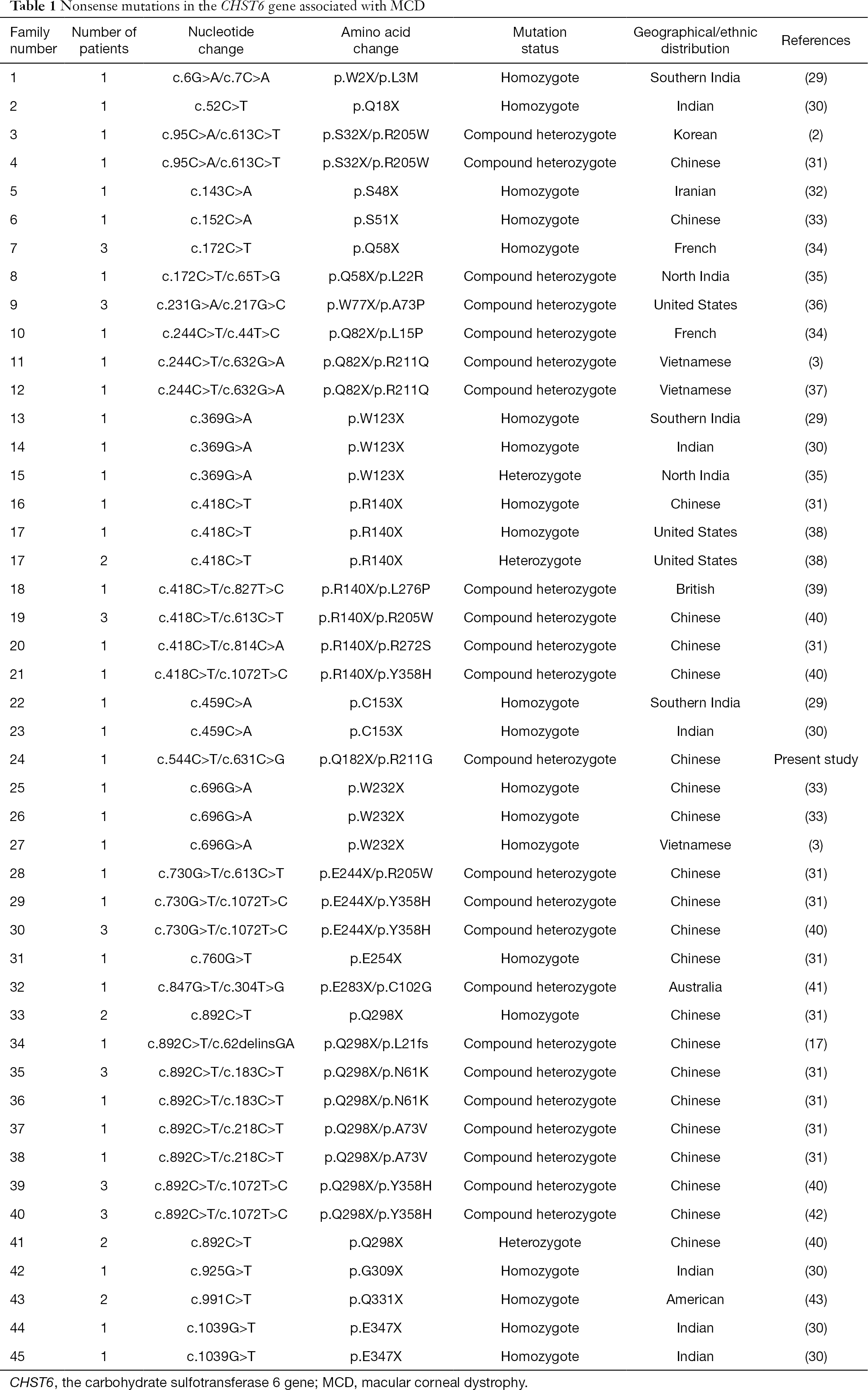 Genetic mutation type and position may influence CHST6 functions, particularly conserved positions across either or both of carbohydrate sulfotransferases or within a critical domain important for enzyme activity (40). The c.631C>G (p.Arg211Gly) mutation, previously reported as unique in two other Chinese families, was identified as one of the disease-causing alleles in our patient (10,31). The identical nucleotide substitution observed in the other two families of the same ethnicity may indicate a founder effect (10,31). The c.631C>G variant leads to the arginine-to-glycine substitution, changing from a positively charged basic amino acid residue to a neutral amino acid. The c.632G>A (p.Arg211Gln) variant has been identified in ethnic Vietnamese, Chinese, and German pedigrees (3,10,44). The c.631C>T (p.Arg211Trp) variant has been found in ethnic Turkish and Japanese populations (16,45). This multiple-ethnicity presence supports a conclusion that amino acid position 211 may be a hot spot mutation position (Table 2). 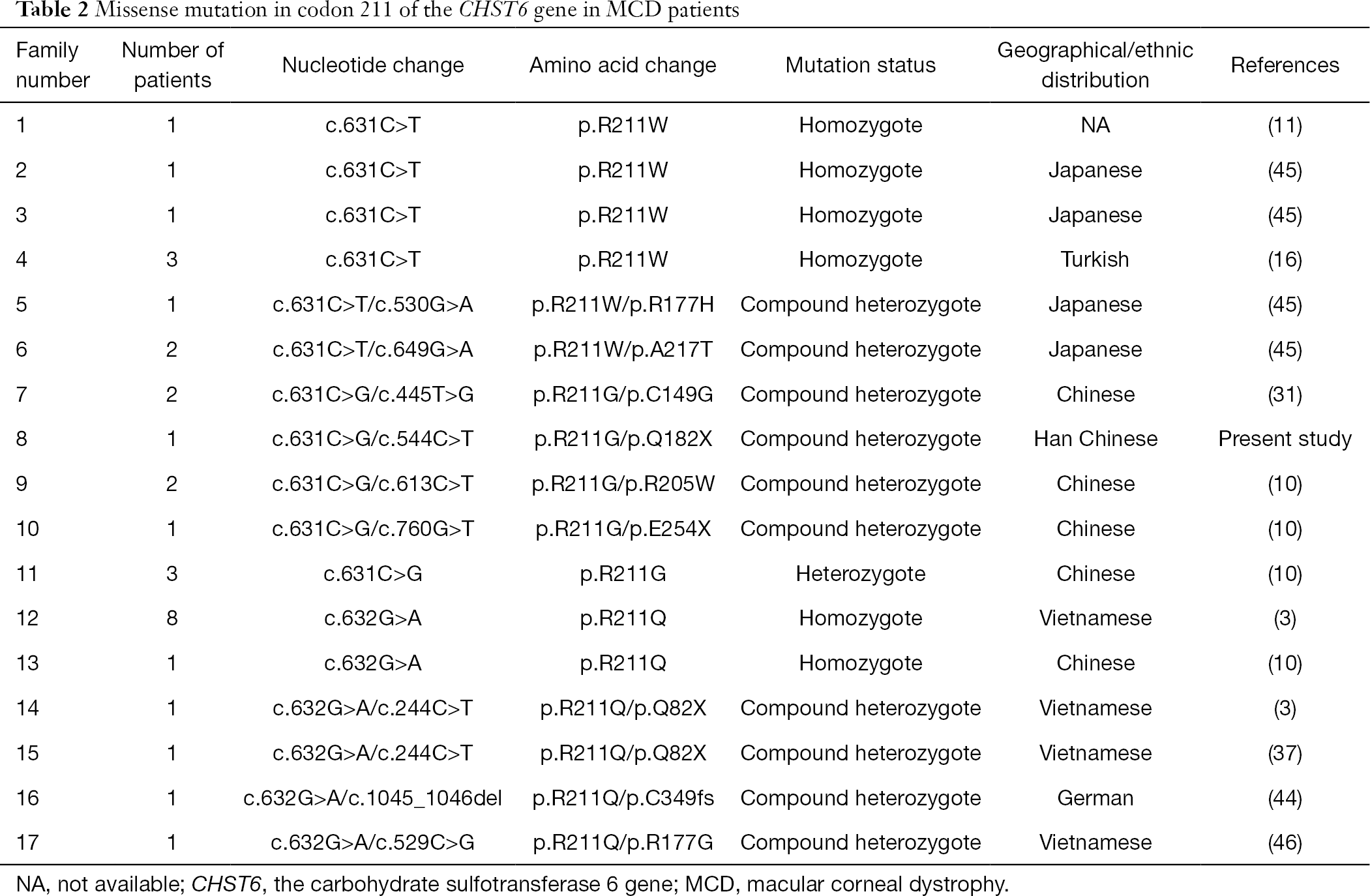 Cornea deposition was detected by confocal microscopy and was consistent in several MCD patients (9,47). High-definition OCT showed some larger diffuse opacities and a hyper-reflective background located on the subepithelial. Multifocal hyper-reflective deposits were detected in the anterior stroma. The OCT results indicated that hyper-reflective deposits caused thickening of the subepithelial and anterior stroma, which led to thinning of the cornea. Though MCD has been widely studied and various CHST6 mutations have been reported, the limited phenotype-genotype relationship data seem to have little value (7,9). It has been reported that there may be more severe clinical phenotypes and earlier requirements of keratoplasty in ethnic German and French patients with CHST6 nonsense and frameshift mutations (2,34,44). However, a few studies from Turkey, Egypt, and India have shown there are no consistent phenotypic differences between patients with missense mutations and truncating mutations (12,16,30). More large-scale evaluations of MCD genotype-phenotype associations are warranted.

Different modalities of treatment are suggested for visual restoration of MCD (4,41). Phototherapeutic keratectomy treats superficial and anterior corneal pathology (4,48). Penetrating keratoplasty may improve the BCVA of patients having corneal dystrophies without recurrence (44). Femtosecond laser-assisted lamellar keratectomy is reportedly successful in removing corneal opacities secondary to anterior corneal dystrophies (48). Newer therapy strategies such as gene transfer and gene editing have been evidenced to be effective in both in vitro and experimental models (4,14).

In summary, a novel nonsense mutation p.Gln182Ter and a recurrent missense mutation p.Arg211Gly in the CHST6 gene were identified in a Han-Chinese patient with MCD. This finding expands the spectrum of genetic mutations. The discovery of additional CHST6 mutations in diverse ethnic populations will help to further explicate genotype-phenotype associations. Additional functional investigations of specific mutations both in vitro and/or in vivo, such as in human corneas or constructed genetic-deficient animal models, will contribute to elucidate the underlying mechanisms in MCD.

We would like to thank the participating members and investigators for their cooperation and efforts in collecting clinical data, genetic information, and DNA specimens.

Reporting Checklist: The authors have completed the MDAR reporting checklist. Available at http://dx.doi.org/10.21037/atm-20-7178

Conflicts of Interest: All authors have completed the ICMJE uniform disclosure form (available at http://dx.doi.org/10.21037/atm-20-7178). The authors have no conflicts of interest to declare.

Ethical Statement: The authors are accountable for all aspects of the work in ensuring that questions related to the accuracy or integrity of any part of the work are appropriately investigated and resolved. The study was conducted in accordance with the Declaration of Helsinki (as revised in 2013). The study was approved by the Institutional Review Board of the Third Xiangya Hospital, Central South University, China (No.: 2018-S400). Written informed consent was obtained from the female patient.