Neoadjuvant chemoradiotherapy (NCRT) plus surgery has become the standard treatment for patients with esophageal squamous cell carcinoma (ESCC) in the last decade, because it can increase the R0 resection rate and improve the overall survival (OS) (1,2). As a result, changes in pathological features of the primary disease and lymph nodes in response to NCRT, as well as their prognostic value, have attracted the attention of some researchers. The rate of pathological complete response (pCR; no vital tumor cells in resected specimens or lymph nodes) after NCRT ranges from 27% to 49% (1-5), indicating that more than half of patients have persistent residual disease after NCRT. Recent evidence suggests that patients with ESCC who reach pCR after NCRT have longer median OS than those with residual tumor (6). Therefore, it is essential that the correlation between pathological changes and prognosis in patients with pathological residual tumor (pRT) is investigated to inform effective clinical management.

Research on residual tumor patterns in ESCC after neoadjuvant chemotherapy revealed that shallow remnants are dominant, and that deep and diffuse remnants are associated with metastasis (7). Also, the primary tumor regression grade (TRG) and lymph node status are considered valuable prognostic factors in patients with esophageal cancer who receive neoadjuvant chemotherapy (8,9). Patients with a good response on nodal metastasis have better survival outcomes irrespective of the TRG of the primary disease (10). However, a lymph node with stable disease is associated with lower disease-free survival than N0 in ESCC after NCRT (11).

We present the following article in accordance with the STROBE reporting checklist (available at http://dx.doi.org/10.21037/atm-21-1815).

All the consecutive patients who were diagnosed with locally advanced ESCC and underwent NCRT followed by radical esophagectomy at the Sichuan Cancer Hospital, China, between January 2018 and December 2019 were included. The inclusion criterion was histologically confirmed ESCC with pathological stage ypT0-4aN0-2M0. All patients underwent NCRT followed by surgery and had a European Cooperative Oncology Group performance status score of 0–2. Patients with a history of local or distant metastasis were excluded, as were those who underwent anticancer treatments other than NCRT. All patients were administered platinum combined with paclitaxel, docetaxel, capecitabine, or fluorouracil and concurrent radiotherapy. A total dose of 40 Gy was administered in 20 fractions of 2 Gy. Radical esophagectomy was performed 5 to 6 weeks after the completion of NCRT. All procedures performed in this study involving human participants were in accordance with the Declaration of Helsinki (as revised in 2013). This study was approved by the Ethical Committee of the Sichuan Cancer Hospital (No. SCCHEC-02-2017-043), and informed consent was obtained from all participants. 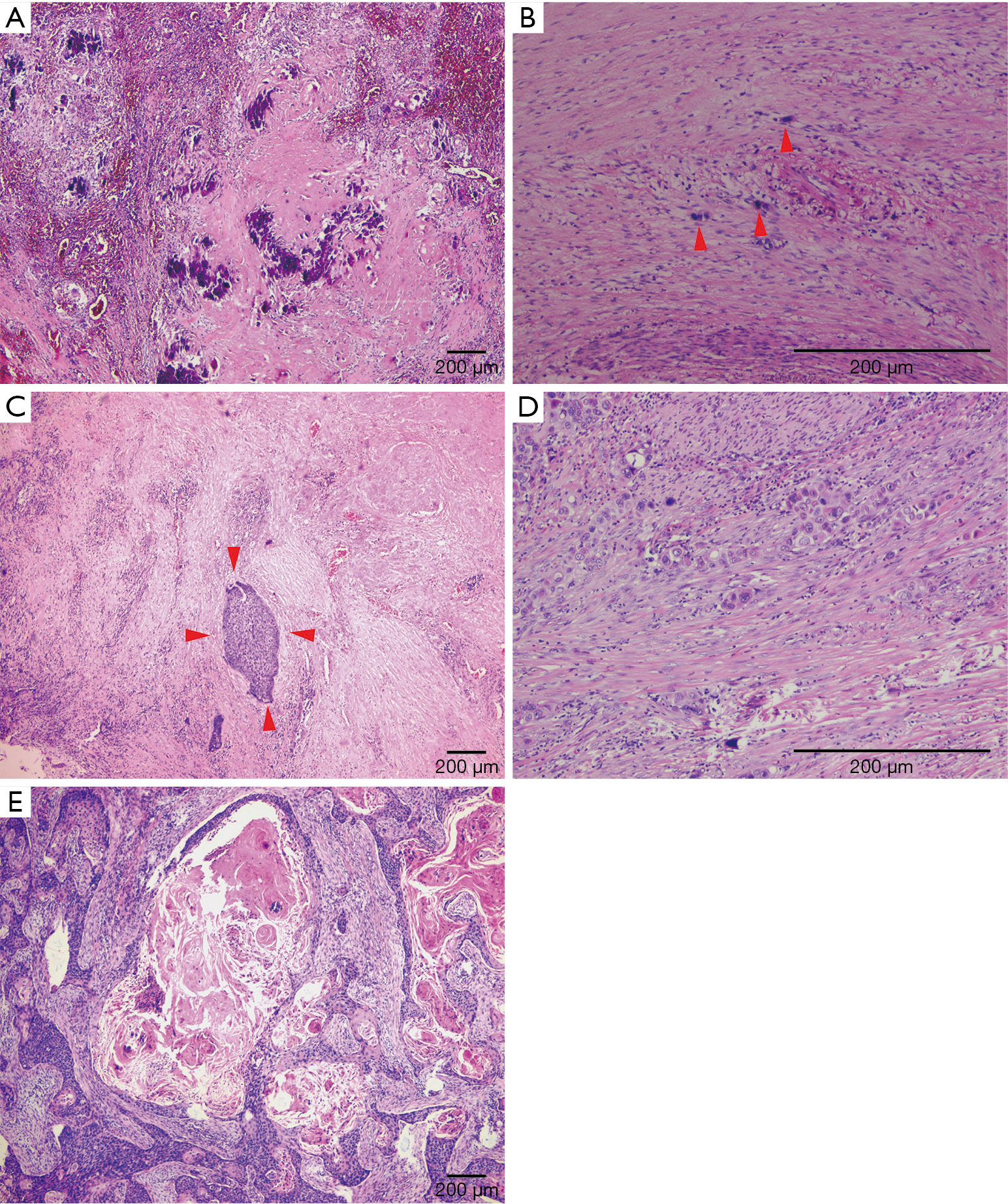 The main methods of follow-up were telephone calls, outpatient visits, and hospitalization review. After surgery, patients were followed-up every 3 months during the first year and every 6 months during the second year. Diagnostic examination was performed only in cases of suspected recurrence. Locoregional recurrence was defined as recurrence in the tumor bed or anastomotic recurrence at the primary disease site or regional lymph nodes. Distant metastasis was defined as metastasis to other organs. 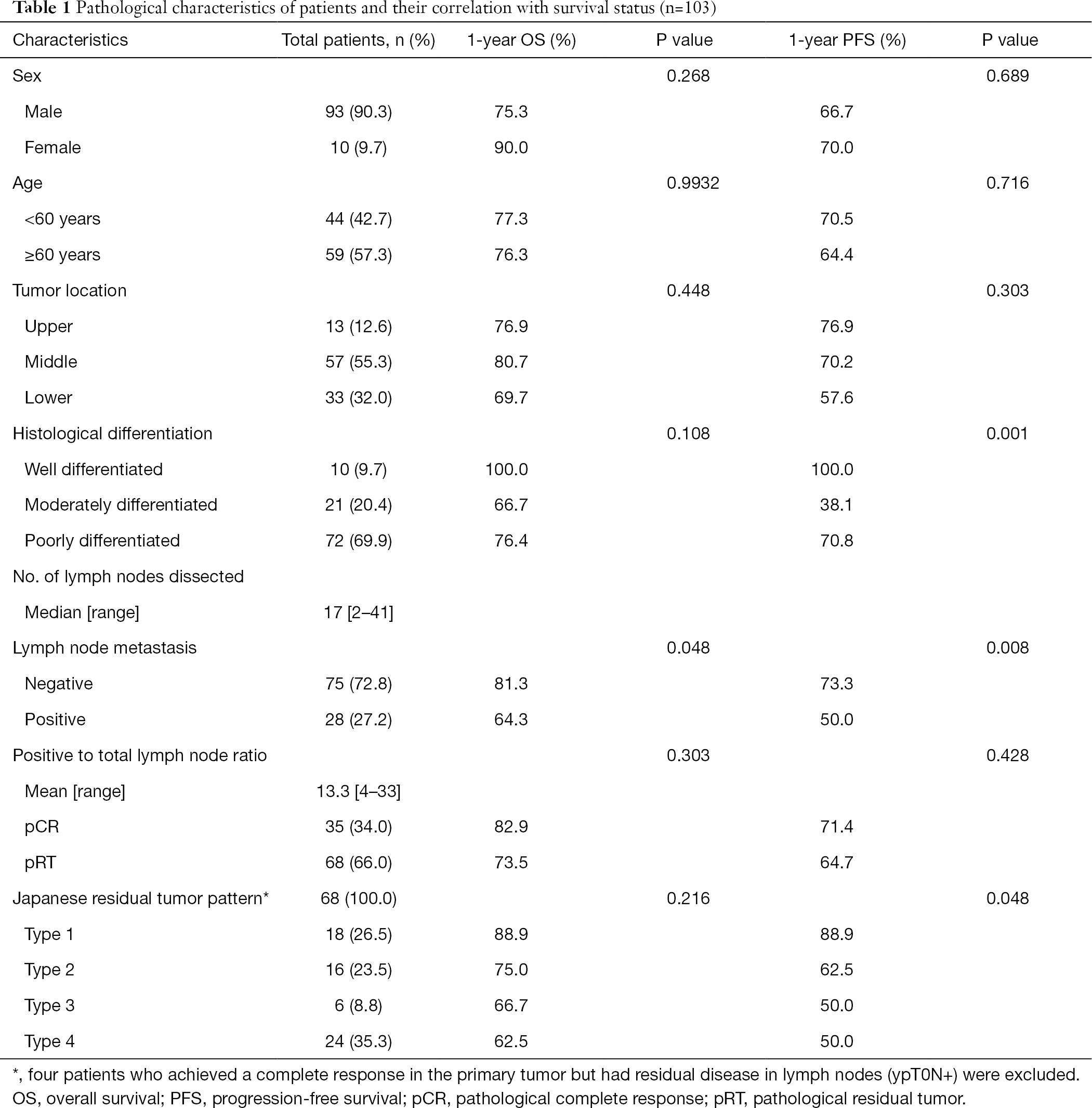 Differentiation and inflammation classification in patients with pCR

The pCR rate for patients with poorly differentiated tumors was 43.1% (31/72), which was higher than the pCR rates among patients with well and moderately differentiated tumors (P=0.002). Interestingly, the rate of pCR declined with the grade of inflammation, except in 1 case with no inflammatory response. However, no significant correlation was noted between the inflammation classification and pCR rate (Table 2).

Pathological features of patients with pRT 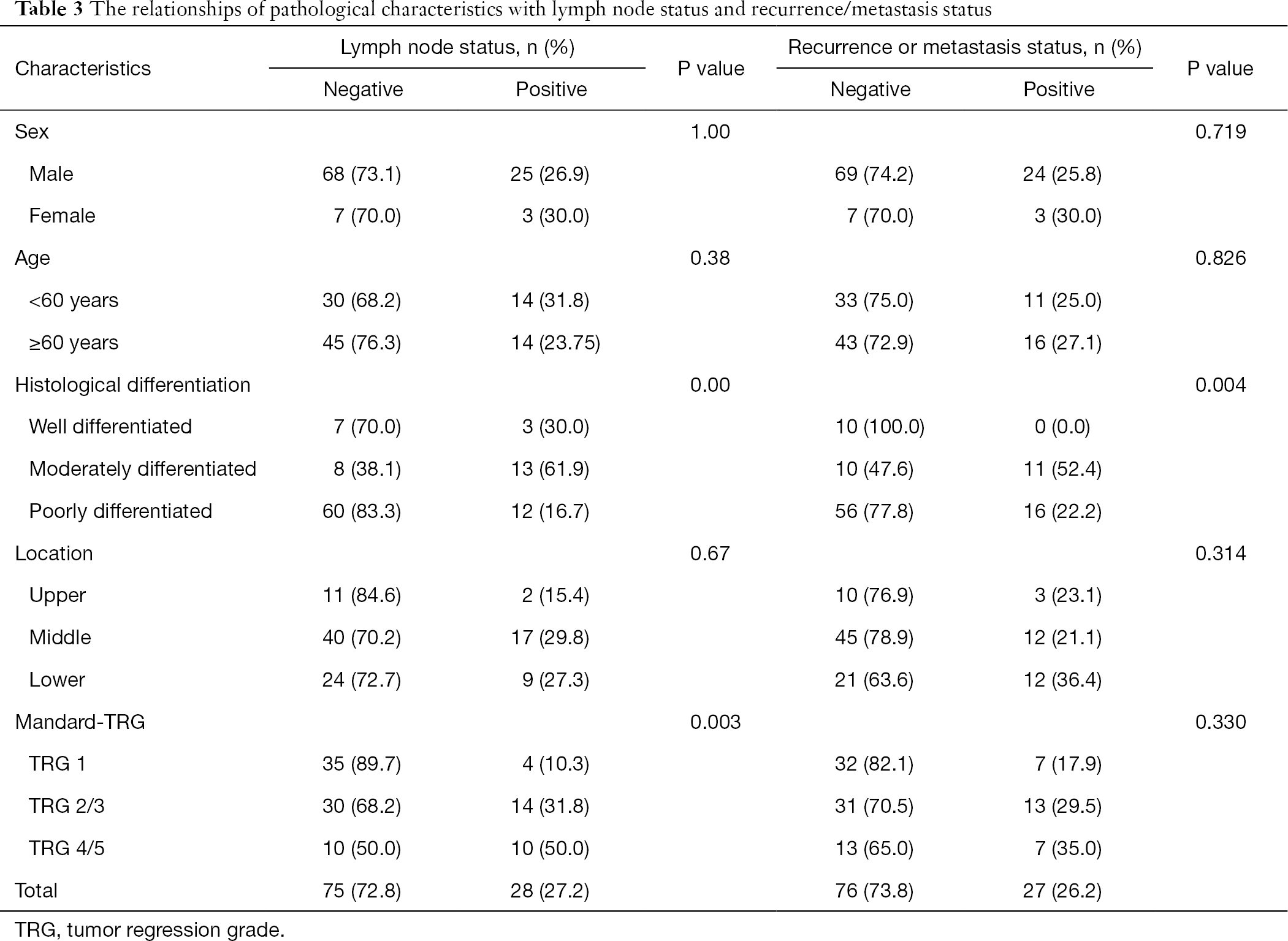 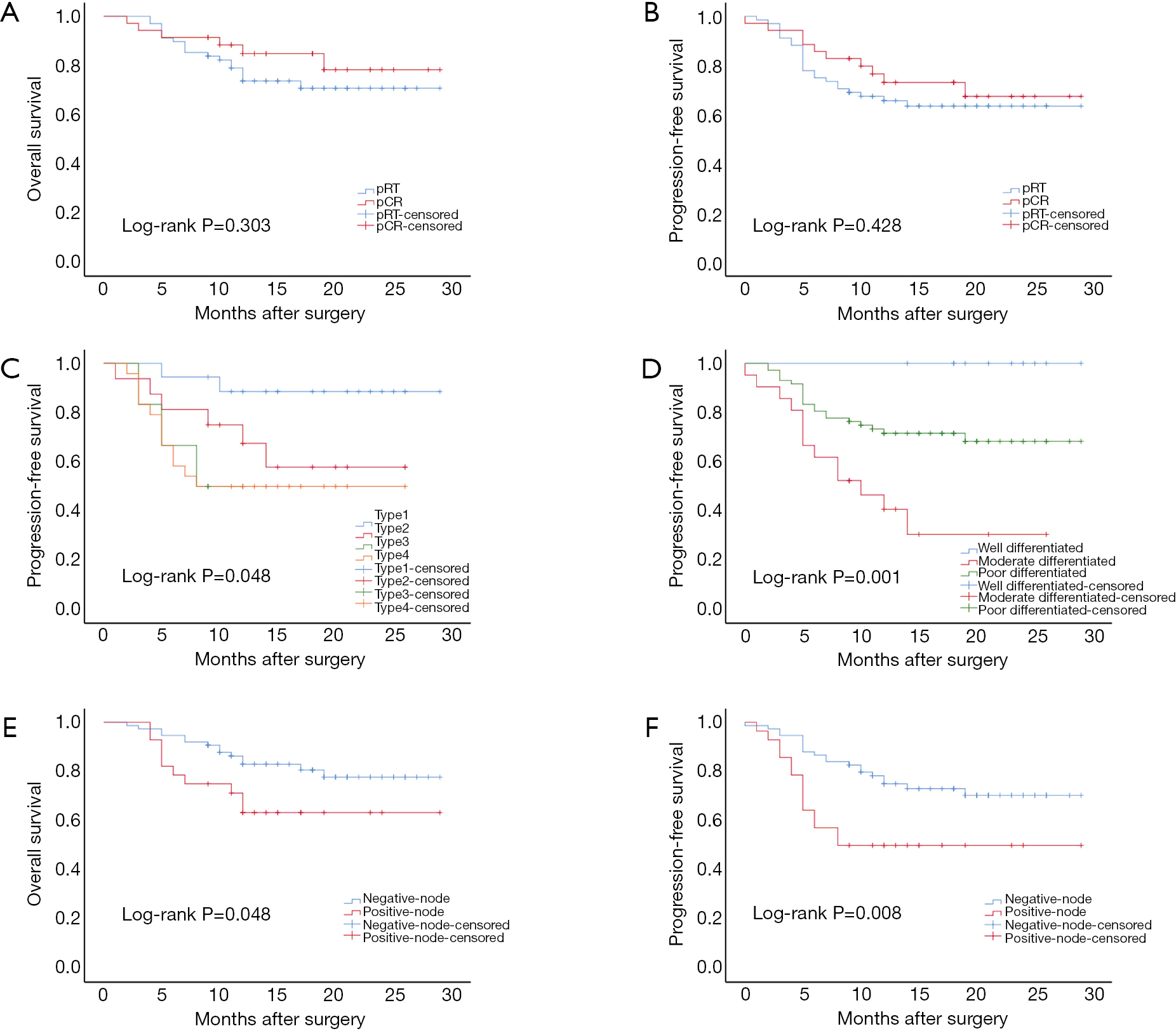 Study of the pathological characteristics and changes of ESCC after NCRT is meaningful to providing information for the assessment of tumor response. In this study, we described in detail the pathological characteristics of ESCC after NCRT and their association with tumor treatment response and prognosis. We first assessed the pathological characteristics of patients with ESCC who received NCRT using the Japanese residual tumor pattern, Mandard-TRG system, local inflammatory infiltration classification, and lymph node status. We found that patients with poorly differentiated tumors showed a better response to NCRT than those with well or moderately differentiated tumors, which is in line with the findings of a previous study (15). A possible reason for this is that poorly differentiated tumors have a high turnover of cells, which increases their likelihood of being affected by DNA damage and apoptosis following NCRT (16). However, a previous study reported that poor tumor differentiation was an independent prognostic factor for recurrence after treatment in some solid tumors (17-19), suggesting that esophagectomy and surveillance are important after surgery in patients with pCR.

In the present study, the majority of patients (66%) had residual disease after NCRT. Hence, one of the most significant current discussions about patients with pRT is the relationships between pathological parameters and prognosis. We found persistent nodal disease after NCRT in 4 (3.9%) patients with pCR in the primary tumor (ypT0N+). The OS of these patients was lower than that of patients with pCR (26) and similar to that of patients with ypT+N+ (27). However, because this study enrolled a small number of patients, no significant difference was noted in 1-year OS between patients with ypT0N+ and those with pCR or ypT+N+. Regarding the tumor residual pattern in the primary tumor, the dominant pattern in this study was diffuse remnant, followed by shallow remnant, central remnant, and deep remnant. Residual tumor cells were commonly present in adventitia, which is similar to the findings of recent studies on esophageal cancer treated with NCRT, which mostly comprised patients with esophageal adenocarcinoma (28). However, this finding is inconsistent with an observation made in a previous study, which reported that the mucosa and submucosa of the esophageal wall are commonly affected after chemoradiotherapy for esophageal cancer (29). The presence of residual tumor cells in the mucosa and submucosa increases the difficulty of diagnosing residual tumors after NCRT. Hence, the use of a TRG system to evaluate tumor response after NCRT is essential in clinical management. Many TRG systems exist (14,30-33); in this study, we selected the Mandard-TRG system to assess the resected specimens. The results revealed a strong positive correlation between the Japanese pattern of residual tumor and the Mandard-TRG system, indicating that deeper tumor invasion was associated with a worse response to NCRT in primary tumors.

Our results are subject to at least three limitations. First, this was a retrospective study conducted at a single institution. Hence, the representativeness of the results may be influenced by unmeasured and unknown confounders. Second, the number of patients enrolled was small; therefore, a large prospective study should be conducted to verify our findings. Finally, the follow-up time was too short to calculate a statistically significant correlation between survival and pathological features after NCRT.

Our study assessed the pathological characteristics of ESCC and their prognostic value after NCRT. The results showed that patients with poorly differentiated tumors can achieve an excellent short-term response but have dismal long-term survival, while those with moderately differentiated tumors have poor outcomes in both the short and the long term. Furthermore, lymph node status shows a higher prognostic value than primary tumor regression. For high-risk patients with ESCC, systematic assessment of the pathological characteristics after NCRT can provide important information regarding prognosis and facilitate treatment decision-making.

The authors thank Wei Xu for her assistance with the statistical analysis and interpretation. The authors also appreciate the academic support from AME Esophageal Cancer Collaborative Group.

Funding: This work was supported by Bethune Charitable Foundation (HX2020031).

Reporting Checklist: The authors have completed the STROBE reporting checklist. Available at http://dx.doi.org/10.21037/atm-21-1815

Conflicts of Interest: All authors have completed the ICMJE uniform disclosure form (available at http://dx.doi.org/10.21037/atm-21-1815). The authors have no conflicts of interest to declare.

Ethical Statement: The authors are accountable for all aspects of the work in ensuring that questions related to the accuracy or integrity of any part of the work are appropriately investigated and resolved. All procedures performed in this study involving human participants were in accordance with the Declaration of Helsinki (as revised in 2013). This study was approved by the Ethical Committee of the Sichuan Cancer Hospital (No. SCCHEC-02-2017-043), and informed consent was obtained from all participants.