China has the highest incidence rate of esophageal cancer (EC) and largest number of EC patients anywhere in the world (1). Most newly diagnosed esophagus cancer patients present with locally advanced disease. For this patient population, surgery is the mainstay treatment choice (2). The addition of neoadjuvant chemoradiotherapy (nCRT) has also been a standard treatment for locally advanced EC in many regions to improve the outcome of EC treatment (3). Theoretically, nCRT could improve local symptoms, reduce micro-metastasis, and prolong survival (3-5), and is thus a promising EC treatment pattern. Significant efforts have been exerted for further exploration of this therapy modality. However, nCRT-related toxicity and increased postoperative complications and mortality might be major problems that would limit the benefit of nCRT (6). Patients with esophageal squamous cell carcinoma (ESCC), and particularly those with advanced disease, tend to be poorly tolerant to chemotherapy due to the heavy use of tobacco and alcohol (6). In some studies, the chemotherapy-toxicity related deaths rates reached 10–14% among ESCC patients (7,8). According to the meta-analysis by Fiorica et al., nCRT plus surgery increased postoperative mortality [odds ratio (OR) 2.10; P=0.01] compared with surgery alone (9). In one randomized study among EC patients, cisplatin-5-fluorouracil (FU) for eight cycles conferred no benefits on survival, but had more complications compared to no chemotherapy (10). Therefore, optimizing the dose and intensity, especially with regards to toxicity, is crucial in nCRT for ESCC.

We present the following article in accordance with the STROBE reporting checklist (available at http://dx.doi.org/10.21037/atm-21-458).

Between June 2008 and December 2016, 78 patients with locally advanced esophageal squamous cell cancer who had received VP1 or VP2 for nCRT followed by surgery in Taizhou Hospital of Zhejiang Province were retrospectively reviewed (Table 1).

All procedures performed in this study involving human participants were in accordance with the Declaration of Helsinki (as revised in 2013). This study was approved by the medical ethics committee of Taizhou Hospital of Zhejiang Province. All included patients provided signed informed consent.

A total dose of 40.0 Gy was administered in 20 fractions of 2.0 Gy, five fractions per week, starting on the first day of the first cycle of chemotherapy. All patients were treated with external beam radiation, using the three-dimensional conformal radiation technique. The gross tumor volume was defined by the primary tumor and any enlarged regional lymph nodes. The clinical target volume provided a proximal and distal margin of 3 cm and a radial margin of 0.5 to 1.0 cm radial around the gross tumor volume. The planning target volume provided an 8-mm margin of the clinical target volume.

Post-treatment follow-up was performed once every 3 months within the first year, and every 6 months thereafter until death. The primary endpoint was OS, which was measured from the date of group assignment to the date of death or the last follow-up.

Normally distributed continuous data were expressed as mean ± standard deviation (SD). Frequencies were adopted to describe the categorical variables. The demographic and clinical parameters of patients in the VP1 and VP2 groups were compared using the t-test for continuous variables and the χ2 test for categorical variables. The Kaplan-Meier method was used to compare OS and disease-free survival (DFS) between the two groups. Statistical analyses were performed using SPSS (IBM SPSS Statistics 19.0, SPSS Inc., Chicago, IL, USA). P≤0.05 was considered to be statistically significant.

Clinical characteristics of the study population

A total of 78 patients who had received either the VP1 or VP2 regimen chemotherapy plus radiation followed by surgery were included in the present study. There were 47 patients in the VP1 group and 31 patients in the VP2 group (Table 1). The clinical characteristics, including age, gender, tumor location, and clinical stage etc., were not significantly different between the two groups. 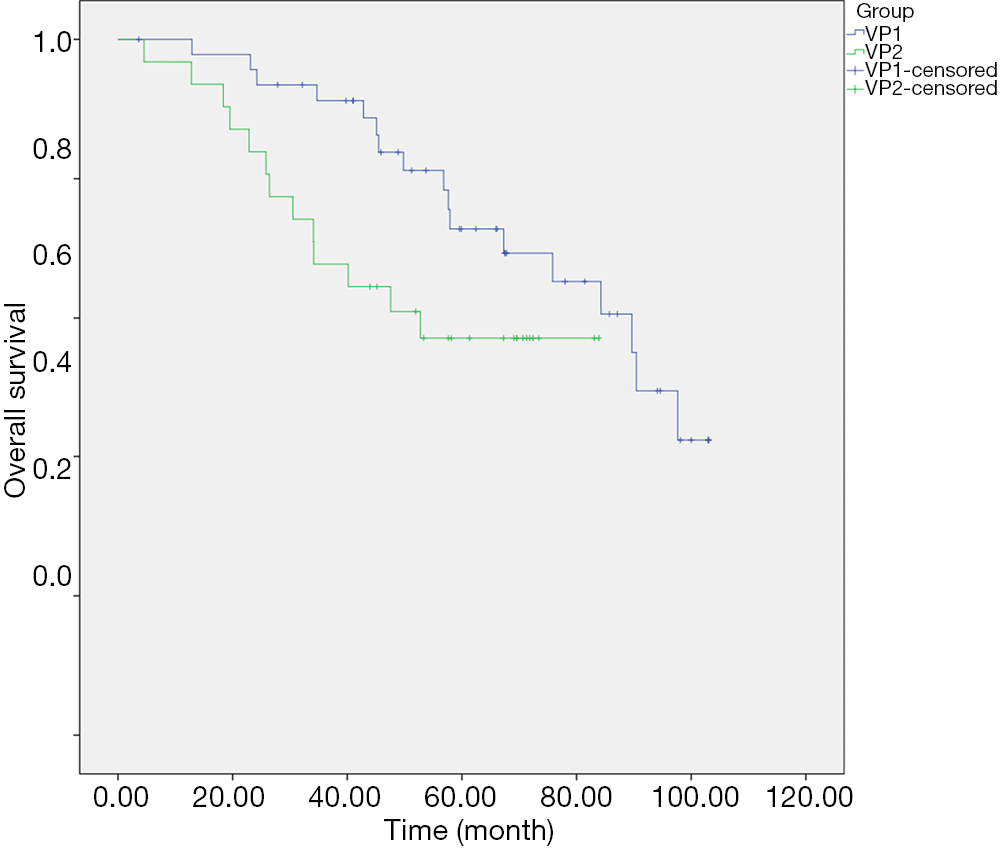 Figure 1 Overall survival curves by group. All values were less than 0.05.

The hematologic and non-hematologic toxicity observed during nCRT are listed in Table 4. Hematologic toxicity was common, especially leukopenia and neutropenia. Digestive tract adverse reactions mainly included anorexia, vomiting, and radiation esophagitis, but were mostly grade 1 or 2. 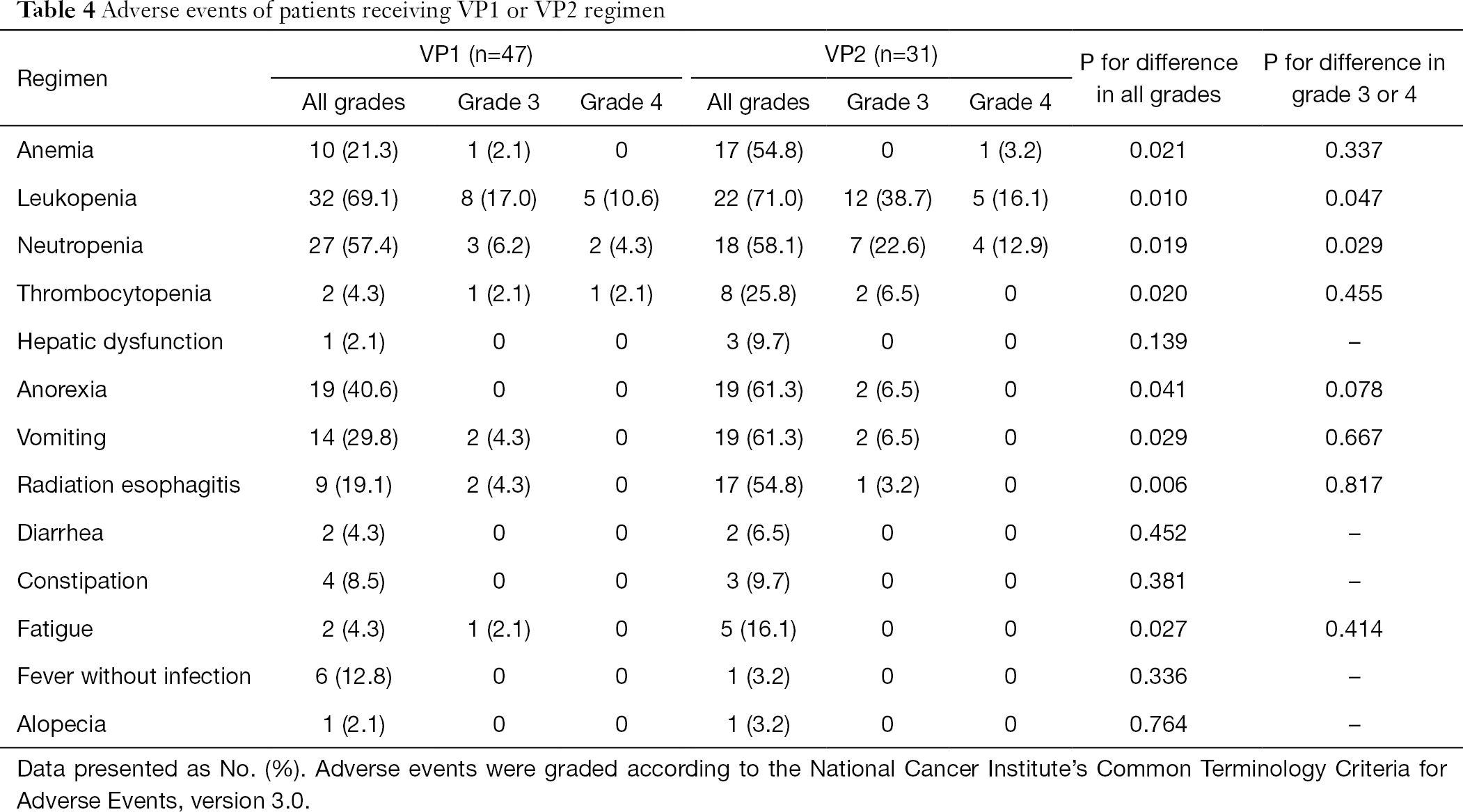 As for non-hematologic toxicity, the rate of all grades of anorexia, vomiting, and fatigue were significantly higher in the VP1 group than those of the VP2 group (all P<0.05). However, there was no difference in the grade 3 or 4 non-hematologic adverse events between the two groups (all P>0.05). No grade 3 or 4 hepatic dysfunction, diarrhea, constipation, or alopecia occurred in either group.

The postoperative complications that occurred in patients of both groups are listed in Table 5. Pulmonary infection, arrhythmia, and anastomotic leakage were common in both groups. Pulmonary infection occurred in four patients (8.5%) in the VP1 group, and eight patients (25.8%) in the VP2 group (P=0.038). However, other postoperative complications, including hemorrhage, pneumothorax, atelectasis etc., were similar between the two groups (all P>0.05). 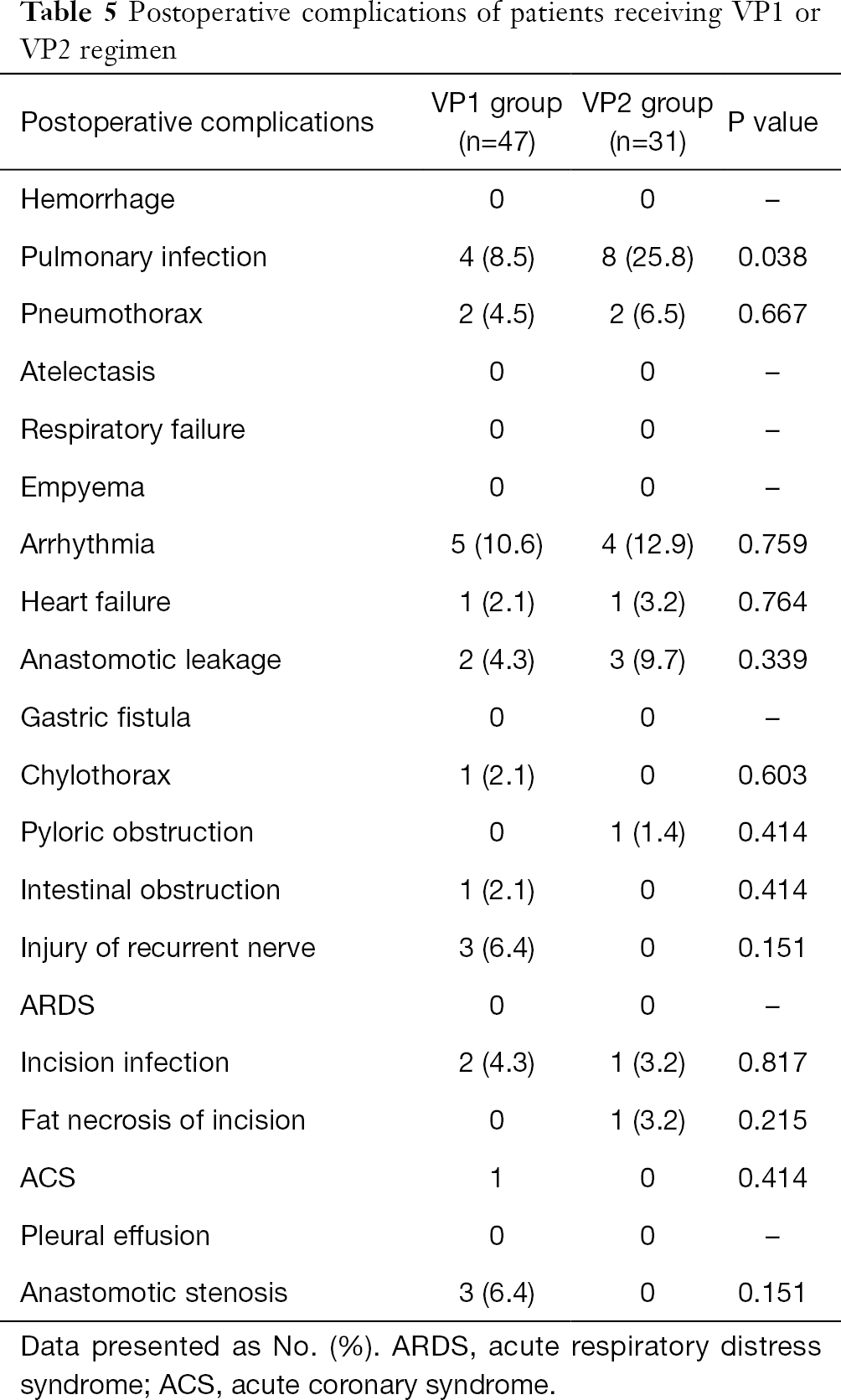 It is important to determine the optimized dose and intensity of neoadjuvant chemotherapy for EC, especially in terms of toxicity. The VP regimen is an effective and promising treatment combination for ESCC, and is worthy of further exploration (17-20). However, its administration pattern varies in different hospitals of China due to the lack of a standard. Therefore, in this study, we compared the safety and efficacy of two commonly applied dose-intensity VP regimens in patients with locally advanced ESCC.

According to the survival analysis of the present study, the median OS was 97.6 months in patients receiving VP2, with a 3-year survival rate of 65.4%; the median OS in VP1 group was not obtained, and the 3-year survival rate was 73.9%. This median OS and 3-year survival rate in the VP2 group were superior to than those reported by Liu et al. in 2015, who noted a median OS of 52.8 months and a 3-year OS rate of 64.3% among 57 patients with stage IIb/III ESCC who also received the VP1 regimen (cisplatin 75 mg/m2 on day 1; vinorelbine 25 mg/m2 on days 1 and 8, for two cycles) (20). The VP1 regimen was also reported as neoadjuvant chemotherapy for locally advanced ESCC patients by Fu et al. (17) and Yang et al. (18), but the survival outcomes for patients receiving the VP1 regimen were not reported. Similarly, the VP2 regimen neoadjuvant chemotherapy had been applied for locally ESCC by Zhu et al., however its benefit on survival was not clear (19). This is the first time that the survival outcomes of patients with locally advanced ESCC who received VP2 nCRT followed by surgery have been reported.

In the present study, the median OS was not significantly different between the VP1 and VP2 groups (P=0.075). The 1-, 2-, and 3-year OS rates were higher in the VP1 group, although the difference was not statistically significant. This result demonstrated that the VP1 and VP2 regimens were comparable in terms of OS.

Previous studies have demonstrated that the VP1 and VP2 regimens were generally well-tolerated, but may lead to myelosuppression, and were thus associated with increased hematologic toxicity (6,17-20). As reported by Liu et al. (20), the incidence of grade 3 or 4 leukopenia and neutropenia related to VP1 were 33.3% and 31.6%, respectively. Conroy et al. reported that the rate of grade 3 or 4 neutropenia among advanced ESCC patients was 41% (cisplatin 80 mg/m2 on day 1; vinorelbine 25 mg/m2 on days 1 and 8, for two cycles) (6). These results were similar to our findings for the VP1 regimen. Furthermore, compared with VP1, the VP2 group showed significantly higher rates of all grades of anemia, leukopenia, neutropenia, and thrombocytopenia (all P<0.05). Therefore, VP2 exhibited more hematologic toxicity than VP1. Digestive tract adverse events such as anorexia, vomiting, radiation esophagitis etc. were also common, but were mostly grade 1 or 2. As for the frequency of non-hematologic adverse events of grade 3 or 4, the two groups showed no significant differences (all P>0.05). On the whole, VP1 had a better safety profile than VP2, mainly reflected in hematologic toxicity. This result corresponds to the higher compliance rate in the VP1 group, which demonstrated that VP1 confers better tolerance.

Pulmonary infection, arrhythmia, and anastomotic leakage were the most common postoperative complications in our study. This is consistent with the study performed by Liu et al. (20) in which pulmonary complications, cardiac complications, and anastomotic leakage were the top three most common surgical complications. Of all the surgical complications, the frequency of pulmonary infection was significantly higher in the VP2 group compared to the VP1 group (25.8% vs. 8.5%, P=0.038), while the frequencies of other complication were similar between the two groups (all P>0.05). This result may be associated with the more severe myelosuppression in the VP2 group, as indicated by higher rates of leukopenia and neutropenia.

In summary, VP1 nCRT is comparable with VP2 in terms of survival among locally advanced ESCC patients. However, it has better compliance, tolerance, and safety profile. Therefore, we recommend the use of VP1 over VP2 for neoadjuvant chemotherapy in ESCC.

There are several limitations in our study that should be noted. Firstly, this is a retrospective cohort study, which, in contrast to a prospective randomized control study, exhibits selection bias. However, the clinical characteristics between two groups were not significantly different. Secondly, all of the included patients were diagnosed with an ESCC subtype, and thus the results may not be generalizable to the EC population, including the adenocarcinoma subtype.

The VP1 regimen showed comparable efficacy to the VP2 regimen in terms of survival, but was associated with better compliance, as well as less hematologic toxicity and postoperative pulmonary infection. Therefore, we recommend VP1 over VP2 to be the optimized VP neoadjuvant chemotherapy regimen for locally advanced ESCC.

Reporting Checklist: The authors have completed the STROBE reporting checklist. Available at http://dx.doi.org/10.21037/atm-21-458

Conflicts of Interest: All authors have completed the ICMJE uniform disclosure form (available at http://dx.doi.org/10.21037/atm-21-458). The authors have no conflicts of interest to declare.

Ethical Statement: The authors are accountable for all aspects of the work in ensuring that questions related to the accuracy or integrity of any part of the work are appropriately investigated and resolved. All procedures performed in this study involving human participants were in accordance with the Declaration of Helsinki (as revised in 2013). This study was approved by the ethics committee of Taizhou Hospital of Zhejiang Province Affiliated to Wenzhou Medical University. All included patients provided signed informed consent.