Lung cancer has been the leading cause of cancer-related mortality, and nearly 30–40% of patients had advanced disease or distant metastases at diagnosis (1). With the development of multimodality therapy, the 5-year survival rate of patients with stage III non-small cell lung cancer (NSCLC) has increased from 9–24% (2) to 12–41% (3), although based on different TNM staging system. A meta-analysis of 15 randomized controlled trials showed that compared with surgery alone neoadjuvant with chemotherapy provided only 5% of survival advantage at 5 years (4), which was equivalent to that provided by post-operative adjuvant chemotherapy (5,6).

Immunotherapy using anti-programmed death 1 (PD-1) or programmed death ligand 1 (PD-L1) antibodies alone, or combined with chemotherapy, has been proved to provided improved survival in stage IV NSCLC. In resectable lung cancer, neoadjuvant therapy with nivolumab and atezolizumab showed major pathologic response (MPR) rate of 21% and 45% respectively, with acceptable toxicity, and no increased operative mortality (7,8). While the role of neoadjuvant with immunotherapy combined with chemotherapy in NSCLC is still not fully understood as there is still paucity of relevant study. Herein, we reported a case from a clinical trial (ChiCTR1900023758), a patient who achieved excellent outcome after neoadjuvant immunotherapy and chemotherapy for local advanced NSCLC. We present the following article in accordance with the CARE reporting checklist (available at http://dx.doi.org/10.21037/atm-21-1565).

The present study was approved by the ethical committee board of Shanghai Pulmonary Hospital. All procedures performed in studies involving human participants were in accordance with the ethical standards of the institutional and/or national research committee(s) and with the Helsinki Declaration (as revised in 2013). A 70 years old male patient developed cough and sputum without obvious inducement. Initially, the patient, the patient was treated in other hospital. The computed tomography (CT) scan revealed that patchy opacity in the left upper lobe. Bronchoscopy was performed but didn’t succeed because of bleeding. The patient was diagnosed as tuberculosis and was treated with anti-tuberculosis therapy. But there was no significant relief of symptoms after 4 months treatment. Then the patient was transferred to our hospital. Reexamined CT scan showed atelectasis of left upper lobe. Positron-emission tomography-computed tomography (PET-CT) showed a mass about 5 cm in diameter in the left upper lobe, with SUVmax value of 20.72. Bronchoscopy showed a neoplasm in the left main bronchus, covering the opening of the left upper lobe. The pathological finding of biopsy was NSCLC, tending squamous cell carcinoma. The patient was classified as T2bN2M0, stage IIIA. Multidisciplinary discussion suggested that neoadjuvant therapy should be carried out first, followed by surgical treatment. After the patient signed the informed consent, anti-PD-1 therapy combined with platinum-based chemotherapy was carried out. The anti-PD-1 immunotherapy was carried out with sintilimab 200 mg, intravenously, and chemotherapy was carried out with carboplatin AUC5 D1 + gemcitabine 1,000 mg/m2 D1, D8.

During neoadjuvant treatment period, the patient had experienced grade 2 myelosuppression and recovered after injection with recombinant human granulocyte colony stimulating factor. After two cycles neoadjuvant therapy. CT scan showed the tumor response and remission of the pulmonary atelectasis (Figure 1). Bronchoscopy showed that the tumor shrank significantly (Figure 2). Clinical evaluation of the tumor based on response evaluation criteria in solid tumors RECIST version 1.1 showed partially response. Surgery was performed 6 weeks after second cycle of neoadjuvant therapy. The surgical procedure includes left upper lobectomy, pulmonary angioplasty, and mediastinal lymph node dissection. The blood loss during surgery was about 200 mL. Pathology findings showed that the mass is about 4 cm × 3 cm × 3 cm in size and there were no resident tumor cells. Instead, necrosis and multinucleated giant cell reaction, cholesterol crystal and fibrous tissue hyperplasia were observed. Pathological findings confirmed pathological complete response (pCR) of the neoadjuvant therapy. Interestingly, a small amount of mycobacterium was found, and tuberculous lesions were considered. All the lymph nodes examined were negative. The patient recovered well and were discharged uneventfully without surgical related complication. As the patient had received anti-tuberculosis treatment for 4 months before the neoadjuvant therapy, and the sputum test for tuberculosis was negative after the operation, considering the tailing effect of immunotherapy and the negative effect of high-dose antibiotics on immunotherapy, we decided not to continue the anti-tuberculosis treatment after the operation. The patient received two cycles adjuvant chemotherapy combined with immunotherapy, then immunotherapy alone monthly. The patient was well during the 4-month follow-up after surgery and would receive immunotherapy till one year after surgery.

Figure 1 CT scan of the patient before and after neoadjuvant therapy showed the tumor response and remission of the pulmonary atelectasis. CT, computed tomography. 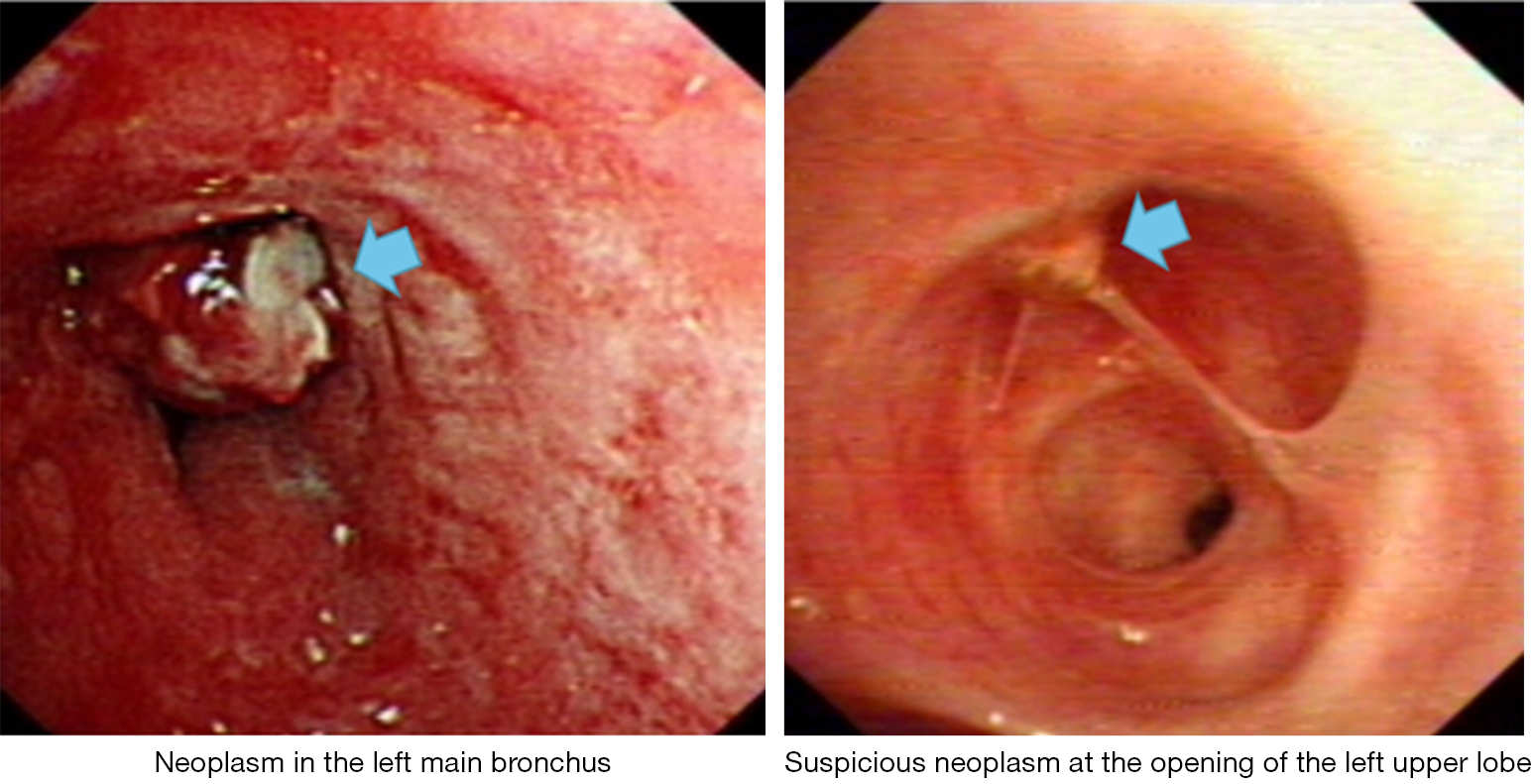 In the present case, the patient should probably receive pneumonectomy, but after the neoadjuvant therapy, the patient underwent left upper lobectomy instead, which preserved the lung function of the patient and reduced the risk of surgery. The margin was confirmed negative by the frozen section during operation.

As to the safety, the overall incidence of AE and the incidence of grade 3 and above adverse reactions in immunotherapy were lower than those in chemotherapy (10,11). Combination of anti-PD-1 therapy and platinum-based chemotherapy didn’t increase adverse events rate of grade 3 or higher (12). As to the feasibility, pulmonary resection was feasible but cautioned that mediastinal and hilar fibrosis might develop as a result of response to immunotherapy (13). A study showed that resection in these patients was safe and feasible, with perioperative outcomes similar to those in a cohort of patients who received neoadjuvant platinum-based chemotherapy (14). In the present case, considering the difficulty of release of hilum, we performed the surgery by open procedure instead of video-assisted thoracic surgery (VATS).

Previous study showed that the percentages of residual viable tumor cells predict OS and disease-free survival (DFS) in patients with resected NSCLC after neoadjuvant (15). In the present case, the patient achieved complete resection and pathological finding confirmed pCR. In most of recent studies, the pathological response rate was used as the primary outcome to evaluate the neoadjuvant therapy. Its impact on long-term survival remains to be further studied.

In conclusion, our case added evidence of the feasibility and efficacy of neoadjuvant immunotherapy combined with chemotherapy in local advanced NSCLC. Randomized, controlled, multi-center studies are needed to confirm these findings.

Reporting Checklist: The authors have completed the CARE reporting checklist. Available at http://dx.doi.org/10.21037/atm-21-1565

Conflicts of Interest: All authors have completed the ICMJE uniform disclosure form (available at http://dx.doi.org/10.21037/atm-21-1565). The authors have no conflicts of interest to declare.

Ethical Statement: The authors are accountable for all aspects of the work in ensuring that questions related to the accuracy or integrity of any part of the work are appropriately investigated and resolved. All procedures performed in studies involving human participants were in accordance with the ethical standards of the institutional and/or national research committee(s) and with the Helsinki Declaration (as revised in 2013). Written informed consent was obtained from the patient.