The treatment options for cancer have expanded with the increasing number of emerging clinical techniques and therapies. Immune checkpoint inhibitors are able to block programmed cell death 1 (PD-1) or programmed cell death ligand 1 (PD-L1) and are an effective treatment approach for various hematologic malignancies and solid tumors (1). Therefore, immunotherapies with a PD‐1/PD‐L1 blockade action have been recognized and approved by regulatory authorities in many different countries. Numerous studies have reported that cancer patients receiving immunotherapy demonstrate a higher response rate and more durable remission (2). However, immunotherapy is only effective in a subset of patients. Identifying which patients are most likely to respond to, and benefit from, cancer immunotherapy remains an unmet clinical need.

However, the role of CD274 in solid tumors remains undefined due to limited data and studies. The two retrospective studies in U.S populations surveyed a wide variety of cancer types and reported that CD274 amplification occurred in a small subset (0.7% and 0.72%, respectively) of patients (8,9). The objective response rate for these patients was 66.7%, with a median progression-free survival of 15.2 months (8). Another study performed with a Chinese population reported a CD274 amplification rate of 3.79% across several common cancer types (10). Given the heterogeneous nature of cancer, the role of CD274 amplification as an immunotherapy biomarker among different populations may also vary and is worthy of further characterization.

In the present study, we performed an extensive analysis of CD274 amplification and its association with other well-known biomarkers for immunotherapies, including TMB, MSI, and PD-L1 expression in more than 10,000 tumor samples from Chinese patients with over 24 cancer types. We also performed an in-depth analysis of the common tumor types in the cohort and the different histological subtypes of lung cancer. We present the following article in accordance with the REMARK reporting checklist (available at http://dx.doi.org/10.21037/atm-21-853).

The study included patients who were diagnosed with malignant solid tumors and had undergone comprehensive genomic profiling. The formalin-fixed paraffin-embedded (FFPE) tumor samples or plasma from the patients were sent to Burning Rock Biotech laboratory (Guangzhou, China), which is a College of American Pathologists (CAP)-accredited and Clinical Laboratory Improvement Amendments (CLIA)-certified clinical laboratory for genetic profiling. The gene panels used in the present study consisted of either 168 genes (Lung Plasma, Burning Rock Biotech, China) or 520 genes (OncoScreen Plus, Burning Rock Biotech, China). Both panels cover the same genomic regions of CD274. The demographic, clinical, and genetic profiling information of the patients were retrospectively collected from a de-identified database. The study was approved by the Institutional Review Board of Wuxi People’s Hospital. Written informed consent was obtained from all patients. All procedures performed in this study involving human participants were in accordance with the Declaration of Helsinki (as revised in 2013).

The paired-end reads were mapped to the human genome (hg19) by a Burrows-Wheeler aligner v.0.7.10 (11). Genome Analysis Toolkit (GATK) v.3.2 (12) and VarScan v.2.4.3 (13) was used to optimize local alignment, call and annotate variants. Factera v.1.4.3 (14) was used to perform DNA translocation analysis. The VarScan filter pipeline was used to filter variants in which loci with depths less than 100 were filtered out. Sequencing results from matched white blood cells were used to filter out germline mutations of the sample. At least eight supporting reads were required for calling single nucleotide variations (SNV) and at least five supporting reads were required for calling insertion-deletion variations (INDEL). Variants were grouped as single-nucleotide polymorphisms (SNPs) and were excluded for further analysis if their frequencies in the Exome Aggregation Consortium (ExAC), 1,000 Genomes, dbSNP, and ESP6500SI-V2 databases exceeded 0.1%. The remaining variants were annotated with ANNOVAR (2016-02-01 release) (15) and SnpEff v.3.6 (16).

CtDNA, which is tumor-derived fragmented DNA released by apoptotic or necrotic cancer cells, only constitutes a very small fraction of cell-free DNA (released by normal cells) and usually ranges from 0.01% to 0.1%. Numerous studies, including our internal data, have shown that more than 50% of mutations identified from plasma have an allelic frequency of less than 1%. Therefore, ultra-deep sequencing is necessary to identify mutations from plasma. The range of an average sequencing depth of 5,000×–20,000× is a well-established criterion for plasma genotyping. Matched white blood cells were used for germline mutation filtering. An average of 20,000× sequencing depth was achieved. Mutational allelic frequency (MAC) is the frequency of a variant in a defined population, expressed as a percentage. In this context, MAF is the percentage of a specific variant detected from plasma.

The continuous variables were presented as mean or median scores. The categorical variables were presented as frequencies. The unpaired Wilcoxon signed-rank test was used to compare continuous variables, while two-sided Fisher’s exact tests were used to compare categorical variables where appropriate. The statistically significant threshold was P value <0.05. All bioinformatics analyses were performed with R (v.3.5.3, the R Foundation for Statistical Computing, Vienna, Austria). 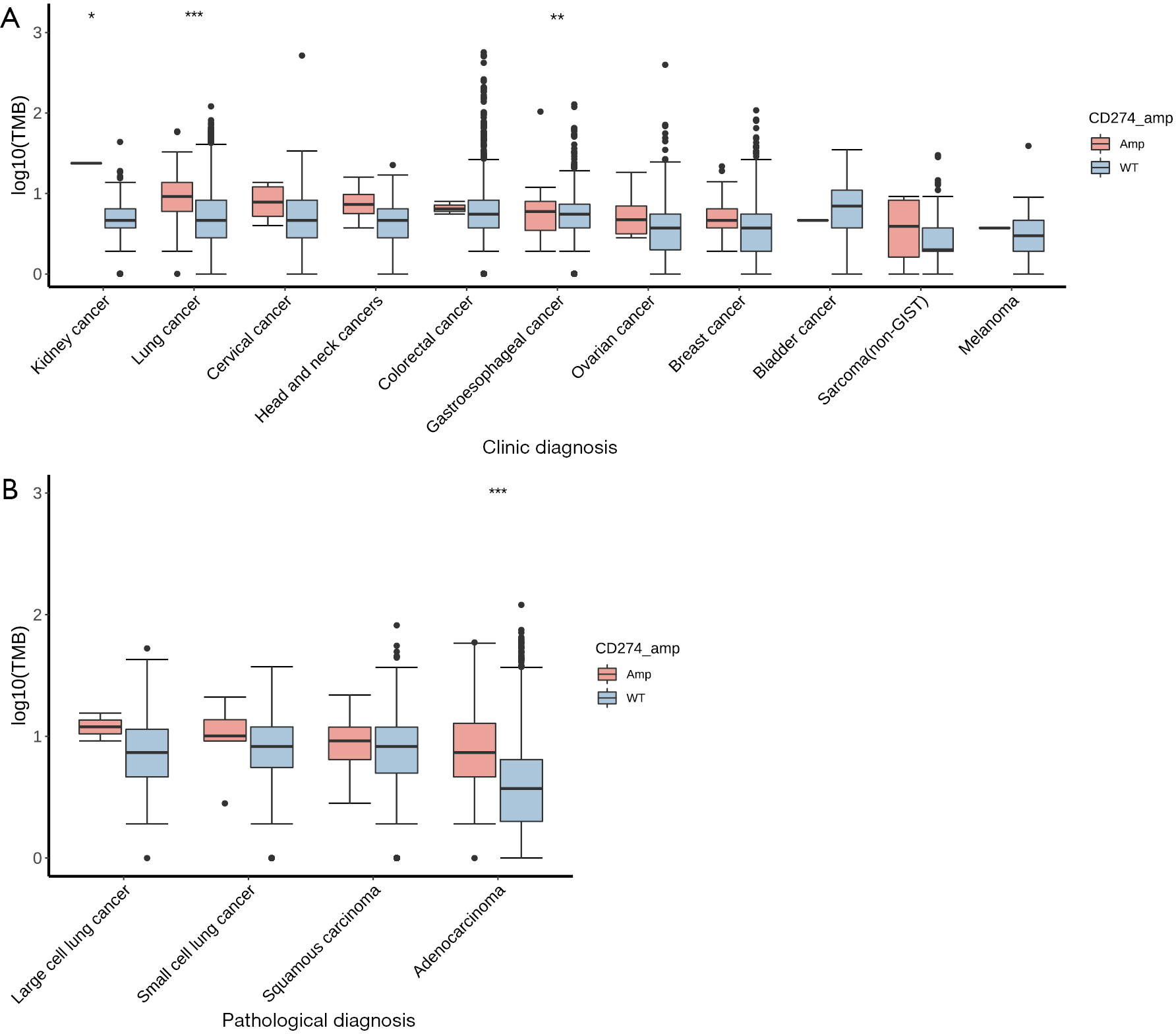 Figure 2 Tumor mutation burden (TMB) levels in CD274 amplification group and wild type. (A) Comparison in common cancer types; (B) comparison in different histological subtypes of lung cancer. The levels of TMB are indicated with logarithmic transformation in the vertical axis. The P value is indicated with asterisks. *, P<0.05; **, P<0.01; ***, P<0.001. 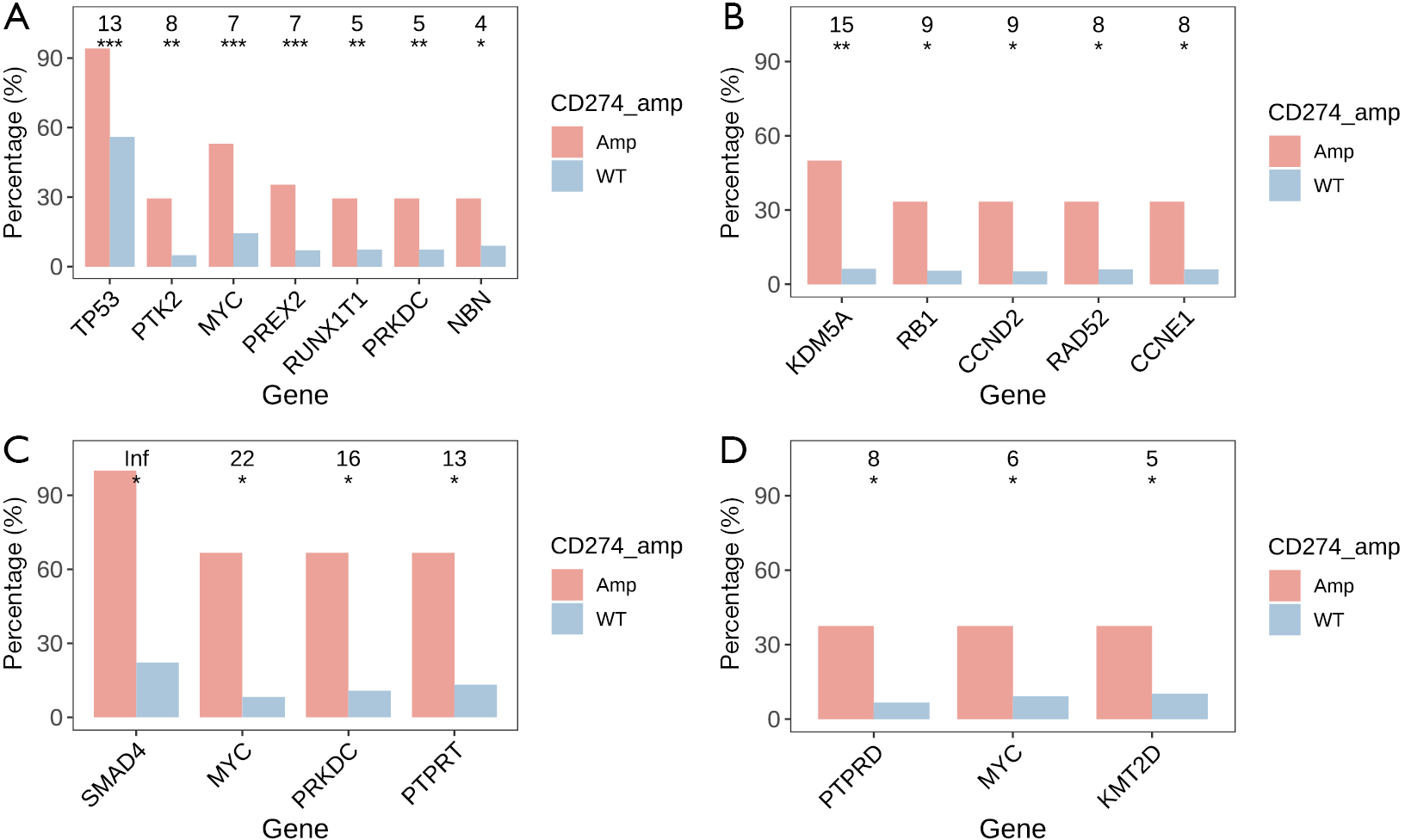 Figure 3 Distribution of mutant genes in other common cancer types of the cohort. (A) Breast cancer; (B) ovarian cancer; (C) colorectal cancer; and (D) gastroesophageal cancer. The numbers at the top reflect the effect size of each mutant gene indicated by odds ratio (OR). Inf: OR with positive infinity. The P value is indicated with asterisks. *, P<0.05; **, P<0.01; ***, P<0.001. 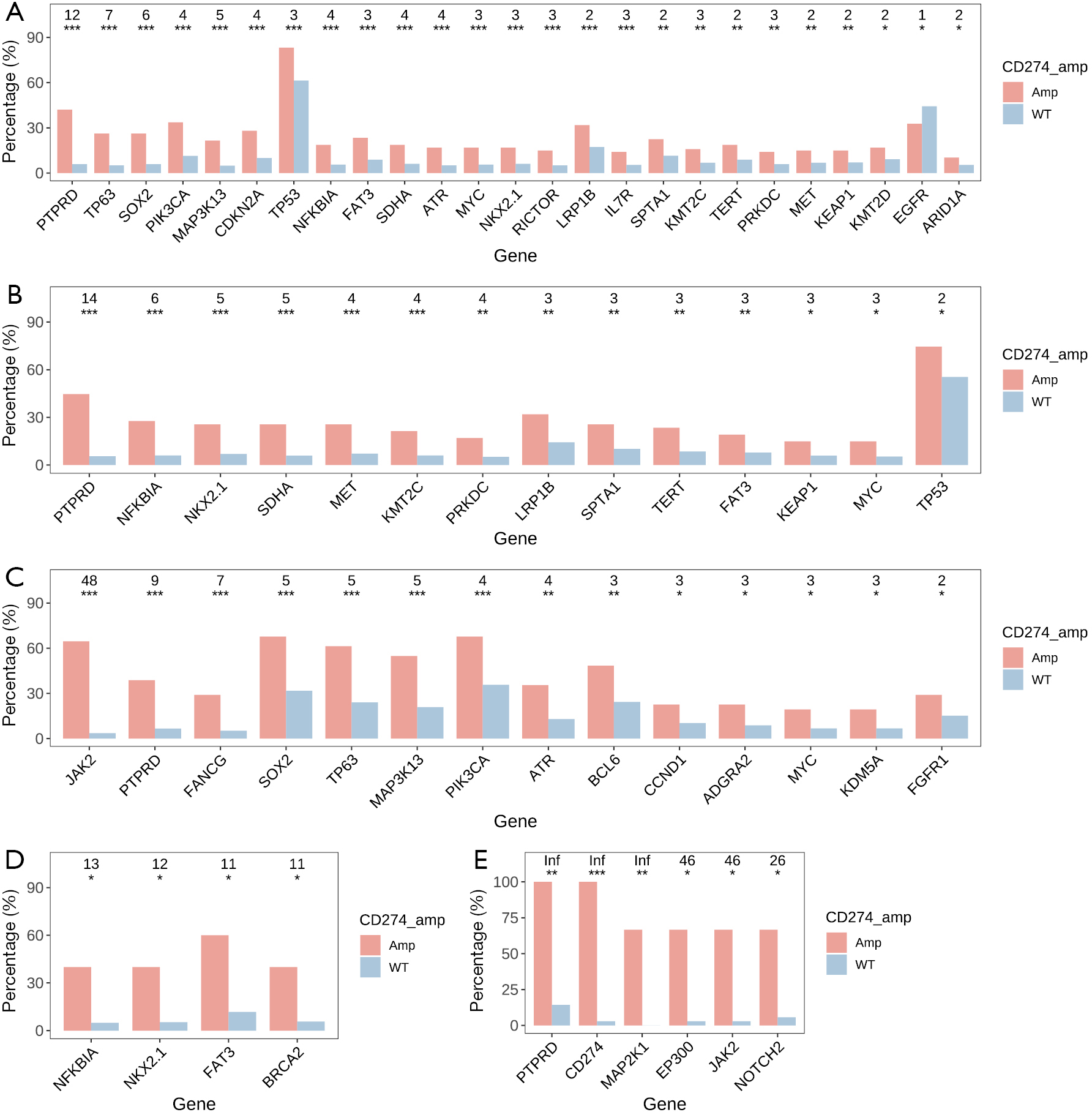 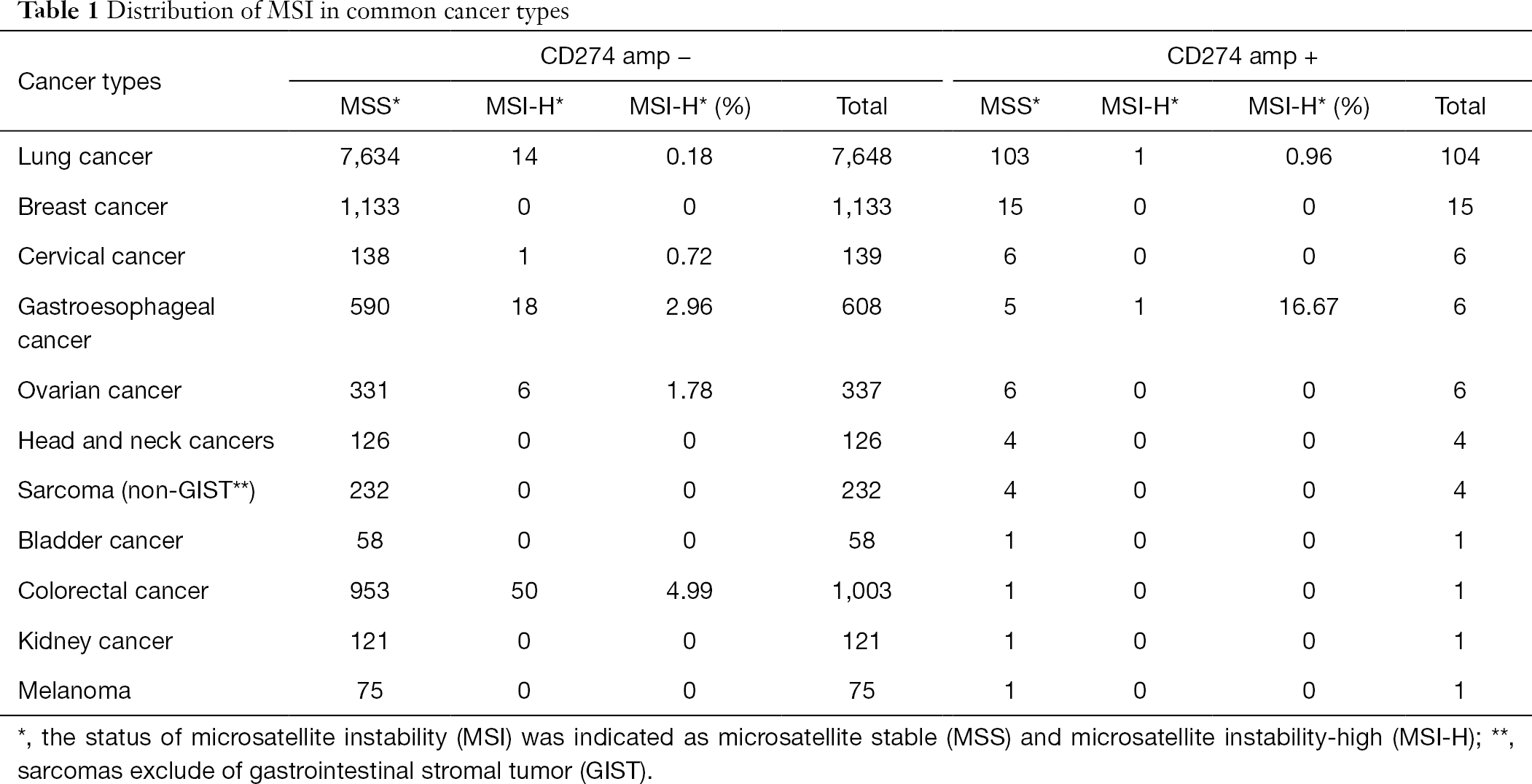 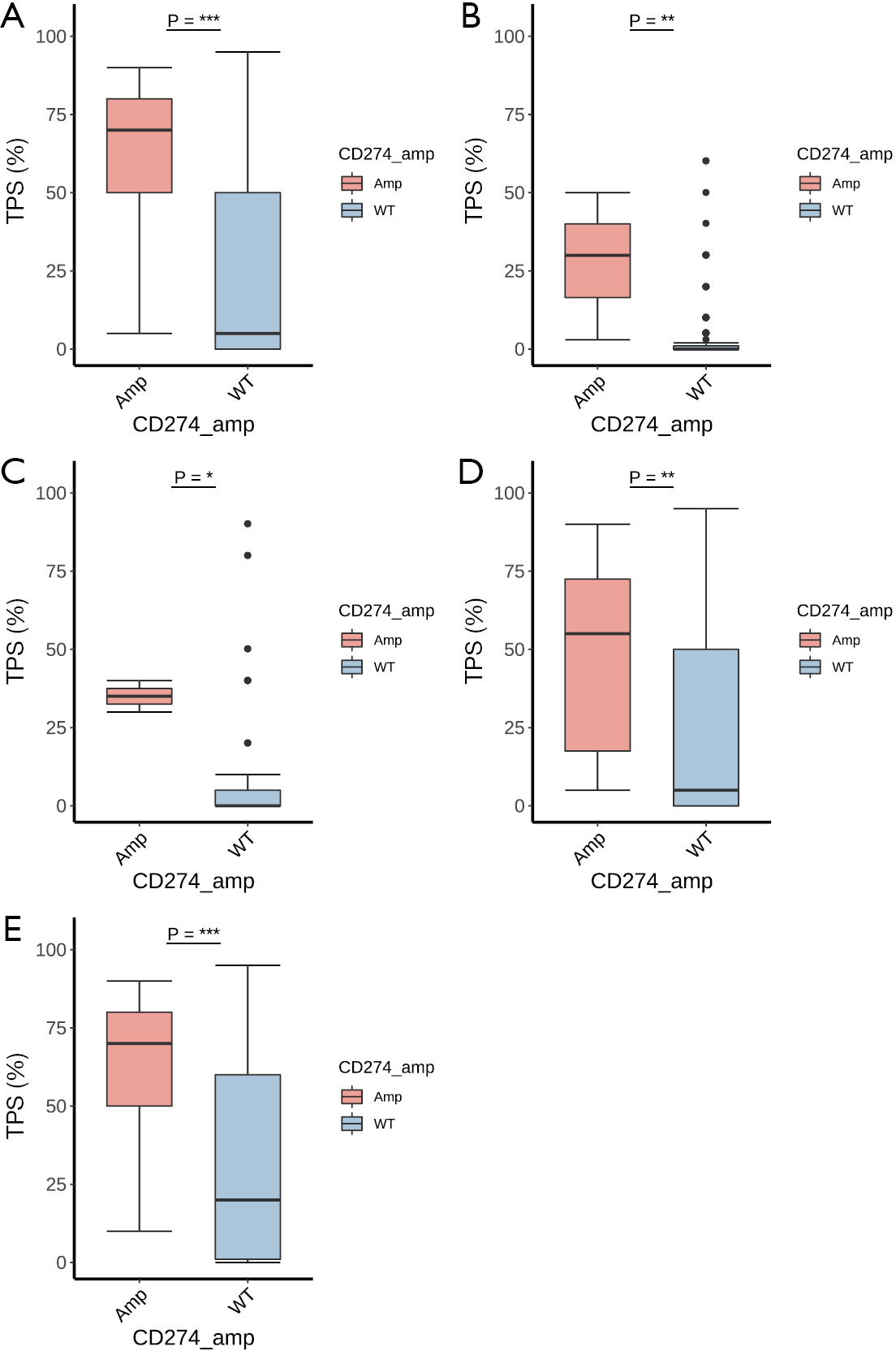 The development of immunotherapies via PD‐1/PD‐L1 blockade has shown promising treatment responses for various cancer types. However, several clinical studies have indicated that only a limited proportion of patients may benefit from PD‐1/PD‐L1 inhibitors. Significant efforts have been undertaken to develop predictive biomarkers, including TMB (3), MSI (4), and PD-L1 expression (5,6), in order to identify appropriate patients for PD‐1/PD‐L1 immunotherapy. In addition, amplification of the CD274 gene has also been proposed as a novel biomarker for patients receiving immunotherapy.

The present study analyzed the distribution of established predictive biomarkers such as TMB, MSI, and PD-L1 expression for immunotherapies. Among all cancer types, the mean TMB was 5.87 mutations/Mb and the median TMB was 3.64 mutations/MB, which is slightly lower than the US cohort study that reported a mean TMB of 7.9 mutations/Mb and a median TMB of 3.8 mutations/Mb (9). TMB levels appear to vary according to different cancer types. Higher TMB levels in lung cancer and colorectal cancer have been reported in a Chinese population (10), whereas higher TMB levels in melanoma, lung cancer, and urothelial carcinoma have been reported in a US population (9). TMB was also associated with the amplification of CD274. It was reported that mutational load was higher in CD274-amplified samples (17). In our study, the mean TMB of the CD274-amplified and wild-type samples were 9.95 vs. 5.83 mutations/Mb (P<0.05), respectively. The medians were 6.36 vs. 3.64 mutations/Mb for the CD274-amplified and wild-type samples, respectively (P<0.05). In most cancer types in the present study, TMB levels trended higher in the CD274-amplified samples than the wild-type samples, but no statistically significant differences were observed except for lung cancer, gastroesophageal cancer, and kidney cancer. Our study also identified heterogeneous signatures of mutant genes between CD274 amplification and wild-type groups. Common oncogenes such as P53 and MYC showed a higher proportion of mutations in the CD247-amplified samples among various cancer types.

In addition, this study also performed an analysis of other biomarkers including MSI and PD-L1 expression. The overall prevalence of MSI-H in our study was 0.91% which was lower than previous studies that reported a prevalence of 4% in a Chinese population sample (10) and 1.9% in a US population sample9. This finding might be explained by the high proportion of lung cancer samples in the present cohort. MSI varied widely among different cancer types. A study of MSI across 39 cancer types indicated that 0.53% of lung adenocarcinoma and 0.60% of lung squamous cell carcinoma were MSI-H which were lower than other common cancer types (25). In our study, colorectal cancer showed the highest proportion of MSI-H which was consistent with previous studies (9,10). None of the identified MSI-H colorectal cancer patients harbored CD274 amplification. The analysis of PD-L1 expression indicated that samples with CD274 amplification showed a significantly higher level of PD-L1 expression in lung cancer (P<0.001), breast cancer (P<0.01), and gastroesophageal cancer (P<0.05). This finding was consistent with previous studies indicating that CD274 amplification was associated with an increased expression level of PD-L1 (20). The underlying mechanisms of PD-L1 upregulation might be associated with the JAK-STAT signaling pathway (22).

There were several limitations in our study, including potential sampling bias and the retrospective design of the study. Our study included cancer patients receiving NGS-based genetic profiling according to their physicians’ recommendations. The distribution of cancer types in the study cohort was also unbalanced. More than half of the samples were lung cancer, while other cancer types may not have been adequately represented. Therefore, the prevalence and distribution of CD274 amplification and other biomarkers might not be representative of some cancer types with limited sample sizes. As a retrospective study, detailed treatment and follow-up information were limited in the cohort. The application of PD-1/PD-L1 inhibitors and survival outcomes in patients with CD274 amplification remains unknown.

The authors thank the patients, their families, and the medical and research staff who participated in this study.

Reporting Checklist: The authors have completed the REMARK reporting checklist. Available at http://dx.doi.org/10.21037/atm-21-853

Conflicts of Interest: All authors have completed the ICMJE uniform disclosure form (available at http://dx.doi.org/10.21037/atm-21-853). YZ, JX, CC, and TH are employees of Burning Rock Biotech. The other authors have no conflicts of interest to declare.

Ethical Statement: The authors are accountable for all aspects of the work in ensuring that questions related to the accuracy or integrity of any part of the work are appropriately investigated and resolved. The study was approved by the Institutional Review Board of Wuxi People’s Hospital. Written informed consent was obtained from all patients. All procedures performed in this study involving human participants were in accordance with the Declaration of Helsinki (as revised in 2013).