Hiatal hernia (HH) is a common disorder with a large proportion of asymptomatic and symptomatic patients well treated medically (1). In contrast, giant hiatal hernia is usually associated with severe acid regurgitation, heartburn, or other reflux symptoms (2) and it is defined as hernia with more than 30% of the stomach translocating into the thoracic cavity (3). A previous study indicated laparoscopic HH repair was associated with lower mortality and shorter hospital stay compared to open surgery (4) and laparoscopic giant hiatal hernia mesh repair has been demonstrated as an effective and safe procedure with significant improvement of outcomes and low recurrence rate (5-8). Compare to open surgery, laparoscopic giant hiatal hernia repair provides better operating view, therefore facilitating the hiatus repair and fundoplication. However, the number of patients over 65 years is gradually increasing worldwide (9) and elderly patients with giant hiatal hernia suffer higher surgical complication rates than young patients (10,11). Therefore, a cautious approach has been adopted to performing this operation on elderly patients, especially for those with concomitant medical problems. While some studies have recently reported favorable outcomes for patients of advanced age (12-16), the present study compared the safety and the efficiency of this procedure between young and elderly patients in our center.

We present the following article in accordance with the STROBE reporting checklist (available at http://dx.doi.org/10.21037/atm-21-1495).

Details of consecutive patients undergoing elective laparoscopic mesh repair of giant hiatal hernia (defined as ≥30% of the stomach herniated into the thoracic cavity) in the Department of Hernia and Abdominal Wall Surgery, Beijing Chaoyang Hospital between January 2015 and January 2020 were recorded retrospectively (Figure 1). The diagnosis was based on gastroscopy, CT scan, and barium meal contrast esophageal radiography. The surgery was performed laparoscopically. For the elderly patients with medical history of cardiopulmonary disease, the lower pressure of pneumoperitoneum is usually applied to prevent from the possible cardiopulmonary complications and neck emphysema. All surgeries were performed by one experienced surgeon who followed the principles of complete reduction of the hernial sac, stomach, and associated herniated structures with extensive dissection to ensure adequate esophageal mobility (17). The anterior and posterior crus were closed with non-absorbable sutures (Prolene) intermittently, and a piece of titanized polypropylene posterior mesh (PFM Germany) was fixed on the diaphragm with absorbable tacks and medical glue (Compont Medical Adhesive, 1.5 mL/tube; Beijing Compont Medical Devices Co., Ltd., Beijing, China) (Figure 2). The subsequent fundoplication was performed according to preoperative 24 h esophageal PH monitoring and manometry outcome and patients were given prophylactic heparin according to their weight after operation. Follow-up data were collected from the outpatient clinic, questionnaire and telephone interview at 6ms after surgery. The analyzed data included procedure-related complications, score-based variation tendency of symptoms, (the lightest score was 0 and the worst score was 10), GIQLI (range from 0 to 144 scores), mortality, recurrence rate, hemoglobin, and use of PPI. The patients missing follow up were excluded from study. 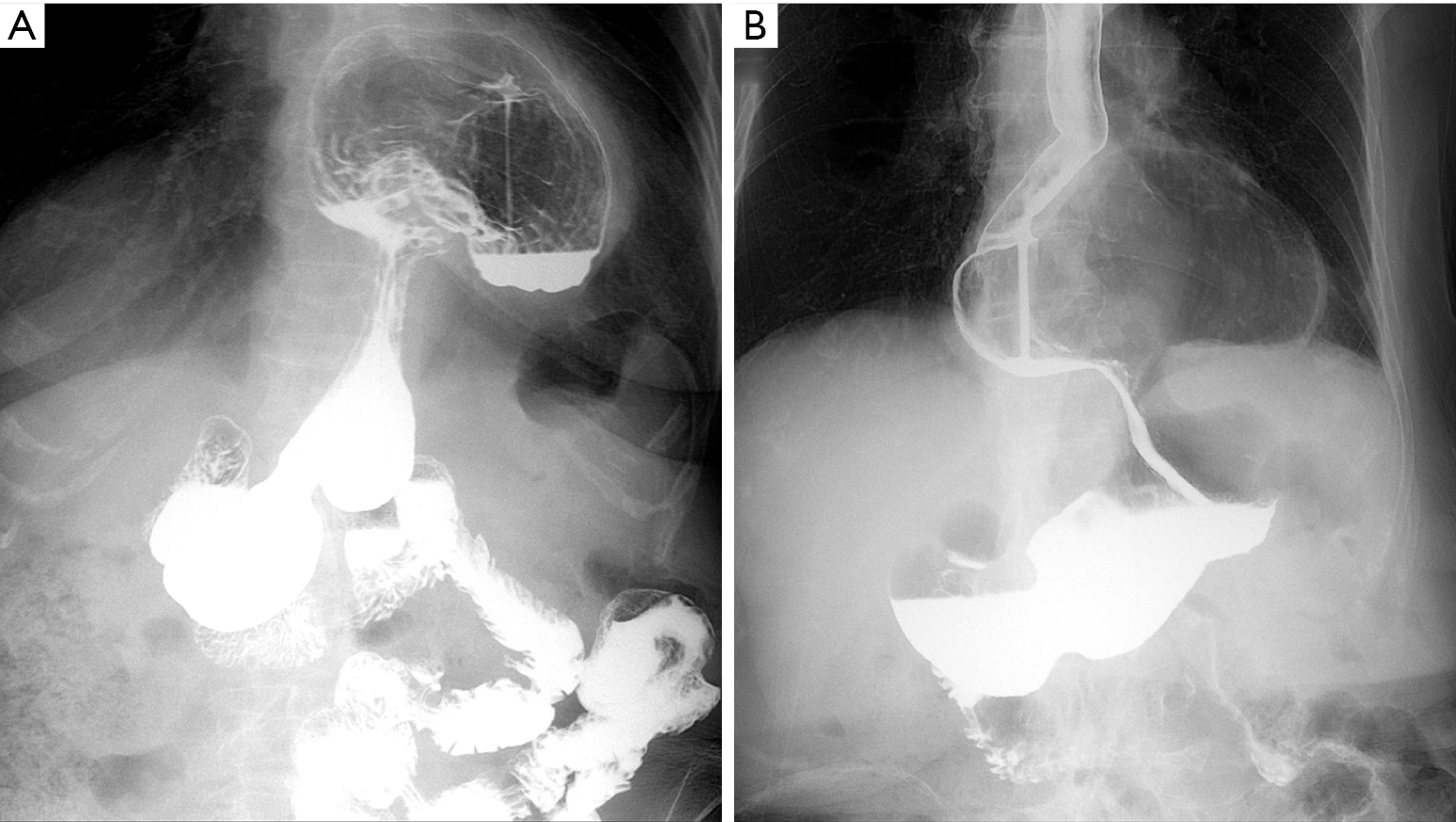 Figure 1 Two patient’s giant hiatal hernia with most of the stomach herniated into the chest. 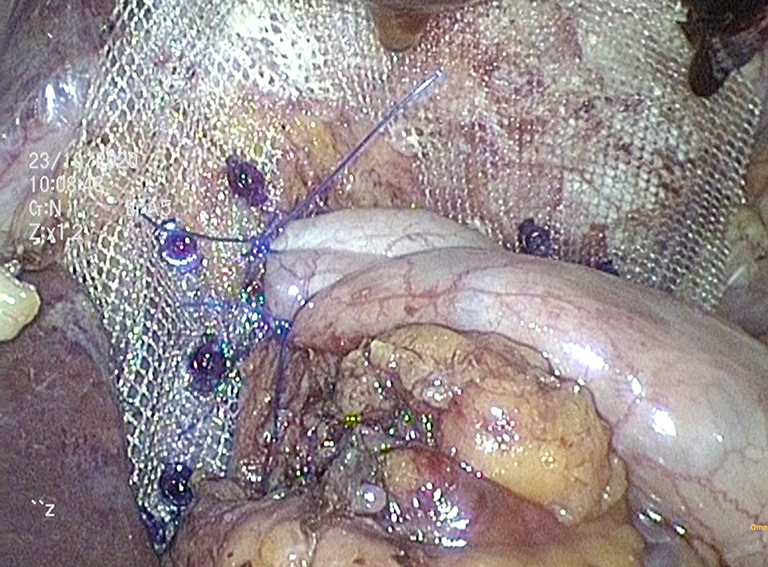 Figure 2 The mesh was fixed on the diaphragm with absorbable tacks and Dor fundoplication was performed.

All procedures performed in this study involving human participants were in accordance with the Declaration of Helsinki (as revised in 2013). The study was approved by institutional ethics committee Beijing Chaoyang Hospital (No.: 2020-2-2035). Individual consent for this retrospective analysis was waived.

The outcome of preoperative evaluation (Table 1) 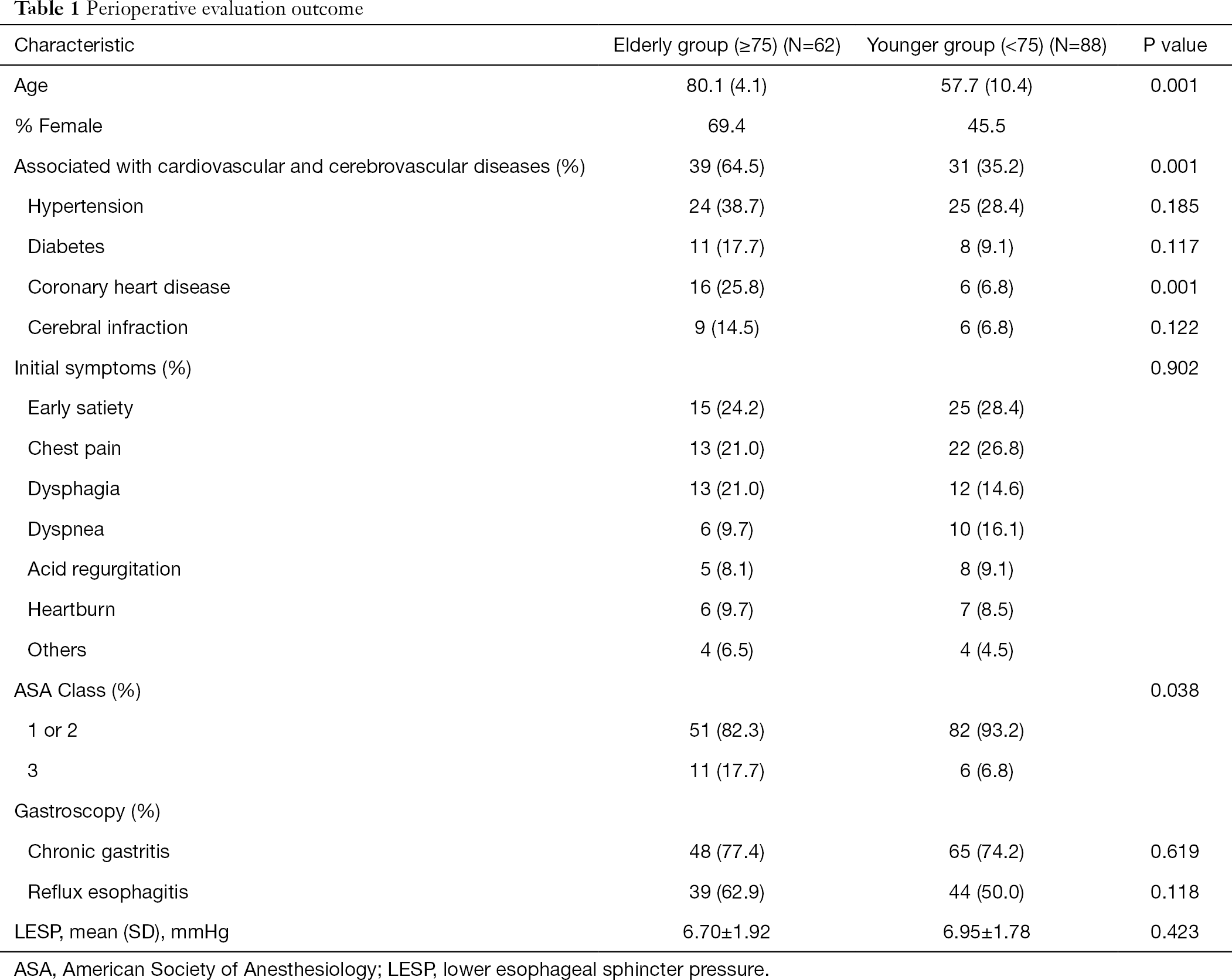 From January 2015 to January 2020, a total of 152 elective patients (69 males and 83 females) were admitted to our center, including 64 patients (aged ≥75) with an average age of 80.1 and 88 patients (aged <75) with an average age of 57.7. Two patients in group of more than 75 missing follow up were excluded. Cardiovascular and cerebrovascular disease, including hypertension, diabetes, coronary heart disease, and cerebral infarction, were seen in 64.5% of the elderly group compared with 35.2% in the younger group (P=0.001) and the percentage of ASA Class level 3 in the elderly group (17.7) was more than the younger group (6.8; P=0.038). The initial symptoms included early satiety, chest pain, dysphagia, dyspnea, acid regurgitation, and heartburn. All patients were diagnosed as having hiatal hernia under gastroscopy including 83 cases (55.3%) associated with reflux esophagitis and esophageal manometry demonstrated the low esophageal sphincter pressure (LESP) in the elderly group was 6.70±1.92 mmHg on average as compared to the younger group 6.95±1.78; P=0.423.

All patients underwent successful laparoscopic hiatal hernia repair with mesh reinforcement and no cases were converted to open surgery. Surgeon recorded the percentage of herniated stomach during operation and there was similar blood loss, operating time, and average proportion of herniated stomach between the two groups without blood transfusion. The hernia contained >50% of the stomach in 50.0% of patients in the elderly group as compared to 35% in the younger group (P=0.102). Six cases (9.7%) in the elderly group and two cases (3.2%) in the younger group were transferred to the Intensive Care Unit after operation for tracheal intubation support and then returned to the general ward safely after being stabilized. In the elderly group, 4 patients (8.1%) encountered pneumonia and 1 patient (1.2%) encountered atelectasis after the operation but quickly recovered after medical treatment. The length of postoperative hospital stay was significantly shorter in the younger group than the elderly group (2.4 vs. 3.5; P=0.001).

A significant improvement in GIQLI scores as a measure of patient satisfaction was demonstrated in the two groups and there was no significant difference in either the preoperative or postoperative QOLRAD scores between the elderly and younger groups.

Giant hiatal hernia accounts for 0.3% to 15% of all HH and has a higher surgical recurrence rate (10.1%) (2,18). Over the last few decades, a laparoscopic approach involving complete separation of the hernial sac from the thoracic cavity (19) has gradually replaced open repair of giant hiatal hernia to become the standard approach, resulting in lower mortality and better life quality (GIQLI) (4,14,15). Routine fundoplication is also recommended for giant hiatal hernia patients (20,21). Laparoscopic surgery has proven sustained benefits in improving symptoms and quality of life in patients with symptomatic hiatal hernia. The possible postoperative complications include dysphagia, gas bloating, diarrhea. These complications normally recover less than 3 ms after diet instruction. Tailored surgery (partial or total fundoplication) is the key step for the satisfactory outcome after surgery. The factors might affect the long-term prognosis are abdominal pressure and body weight. The obesity and high abdominal pressure are risk factors for recurrence.

A series of studies have reported acute complications of giant hiatal hernia such as acute gastric volvulus, intrathoracic gastric perforation, and incarcerated obstruction of the herniated viscera (8,13,22,23). Romano et al. demonstrated the length of stay and mortality of elderly patients was obviously increased in a non-elective giant hiatal hernia repair group compared with an elective repair group (24). Therefore, timely surgical treatment is very important for patients with giant hiatal hernia.

The prevalence of elderly patients with giant hiatal hernia continues to rise with increasing life expectancy in an ageing population (11). Some studies consider elderly patients undergoing giant hiatal hernia surgery to be at higher risk of complications and mortality because of their advanced age and comorbidities (25,26). Gangopadhyay reported that an older patient group (≥75 years) undergoing laparoscopic paraesophageal hernia repair were associated with more complications than other groups (65–74 years group and <65 years group) (27). On the other hand, Khoma et al. demonstrated good outcomes for laparoscopic giant hiatal hernia repair and Nissen fundoplication in a group of 89 patients over 80 years old (10).

Our results suggest giant hiatal hernia is relatively safe for elderly patients in comparison to younger patients. Although 64.5% of patients in our study had concomitant cardiovascular and cerebrovascular diseases, most recovered uneventfully from the procedure. The 30-day mortality (0%) was similar to the younger group and that reported in other studies (15). Elderly patients also had a higher percentage of intrathoracic stomach consistent with younger patients without increasing operative complications. However, elderly patients also trended towards a higher rate of transfer to the intensive care unit after operation (9.6% vs. 3.2%), and ICU departments need to be prepared for this. Surgical outcomes for elderly patients were also favorable in this cohort compared to the younger group. Significant improvement in early satiety, chest pain, dysphagia, dyspnea, acid regurgitation, heartburn, and life quality were sustained during follow up, and this was similar to the younger group and the results of the study by Khoma (10). Of course, various precaution needs to be taken for elderly patients, for instance thorough preoperative evaluation, and less operating time, lower pneumoperitoneum pressure and ICU care when necessary.

During follow up, there was no anatomic recurrence case in either group. The essential steps to avoid anatomical recurrence include fully dissection of abdominal esophagus, complete resection of hernia sac, proper closure of hiatus and reinforcement with mesh. While previous research reported fundoplication and mesh-related complications such as intraluminal erosion, fibrosis, and esophageal stenosis (2,27), there was no mesh related complications in our research. Patients with giant hiatal hernia often complain of symptoms including early satiety, chest pain, dysphagia, and dyspnea. These symptoms result from the compression of lung volume, insufficiency of resultant ventilation, and perfusion mismatch (28). In our study, pulmonary function (FEV1%) raised from 105.5±20.6 to 113.0±12.7 and all related symptoms were recovered after the complete reduction of herniated stomach in elderly group. Previous research has also indicated improvement in respiratory function after the procedure (28,29).

In conclusion, our retrospective study showed laparoscopic giant hiatal hernia repair for elderly patients was performed with low morbidity and a significant improvement in QOLRAD scores after operation demonstrating considerable benefit. Thorough preparation and anesthesia evaluation are essential for the safety of the procedure and its benefits and risks need to be carefully evaluated. Ideally, a prospective multiple- centre study with large number of cases to further confirm the outcome.

Funding: This work was supported by the Capital Foundation of Medical Development (No. 2020-2-2035 to HY).

Reporting Checklist: The authors have completed the STROBE reporting checklist. Available at http://dx.doi.org/10.21037/atm-21-1495

Conflicts of Interest: All authors have completed the ICMJE uniform disclosure form (available at http://dx.doi.org/10.21037/atm-21-1495). The authors have no conflicts of interest to declare.

Ethical Statement: The authors are accountable for all aspects of the work in ensuring that questions related to the accuracy or integrity of any part of the work are appropriately investigated and resolved. All procedures performed in this study involving human participants were in accordance with the Declaration of Helsinki (as revised in 2013). The study was approved by institutional ethics committee of Beijing Chaoyang Hospital (No.: 2020-2-2035). Individual consent for this retrospective analysis was waived.