The lung is the main organ for gas exchange, transporting oxygen from the atmosphere to the bloodstream and releasing carbon dioxide. During respiration, the lung is continuously exposed to a variety of harmful environmental agents, such as bacteria, viruses, particles, and cigarette smoke (1). Chronic or acute exposure to these harmful agents results in damage to the lung (1,2). Pneumonia is an acute infection of the pulmonary parenchyma, accompanied by the presence of acute infiltration on chest radiographs (3). Pulmonary infections have been a cause of high morbidity and mortality, particularly in the geriatric and pediatric populations and in immunocompromised hosts (4).

The major causes of pulmonary infections are microorganisms such as bacteria, fungi, viruses, and parasites. Presently, many diagnostic technologies and tools are used to identify the agents causing infectious diseases (5-7). Species-specific polymerase chain reaction (PCR) testing is a widely used method for pathogen detection (8,9). However, this traditional molecular biological detection method requires prior knowledge of pathogen genome sequences, and some unknown pathogens in samples cannot be detected. Thus, it is urgent to develop new sequence-independent detection methods for the identification of these unknown pathogens.

In recent years, the rapid development of next-generation sequencing (NGS) has provided a more comprehensive alternative (10,11). As an emerging technique, NGS has been widely used in medical microbiology due to its high-throughput capabilities, low cost, and rapid turnaround time (12-14). Pathogenic microorganism DNA/RNA high-throughput genetic sequencing (PMseq) could identify 6,868 pathogens based on high-throughput NGS (12). Compared with traditional methods of pathogen detection, PMseq has many advantages, such as the ability to detect non-culturable organisms, relative speed, and almost no prior knowledge of the organisms is required (15). Despite the advantages, there are also some challenges, such as the lack of appropriate reference genomes for comparisons in certain cases and difficulties in sample preparation (15).

In this retrospective study, we intended to observe the sensitivity of PMseq in different samples of patients with pulmonary infections, in order to provide further evidence of its clinical application value.

We present the following article in accordance with the MDAR reporting checklist (available at http://dx.doi.org/10.21037/atm-21-1322).

A total of 104 patients admitted to the Department of Respiratory and Critical Care Medicine of Shanghai Pulmonary Hospital, Shanghai, China from August 2018 to December 2019 were enrolled. General information including gender, age, and oral temperature at admission were recorded. Patients with an oral temperature over 37.3 °C were considered febrile patients. The bronchoalveolar lavage fluid (BALF) and venous blood samples were collected for PMseq and traditional culture of pathogens. The study was approved by the Institutional Review Board of Shanghai Pulmonary Hospital (No. K21-227) and written informed consent was obtained from each individual in strict accordance with the principles stipulated in the Declaration of Helsinki (as revised in 2013).

Samples were placed in special containers and stored at a low temperature to be sent to the laboratory as soon as possible. Nucleic acids (including DNA and RNA) were extracted directly from the clinical samples with the QIAamp Viral RNA Mini Kit (QIAGEN). After detection of the concentration and purity of nucleic acids on 1% agarose gels, the reverse transcription reaction was performed with the PrimeScript RT-PCR Kit to generate single strand cDNA, followed by the synthesis of double strand cDNA using the Second Strand cDNA Synthesis Kit according to the manufacturer’s instructions. Then, the double stranded cDNA was disrupted into fragments (200–300 bp). Following end repair, A-tailing, adapter ligation, and the PCR reaction, the cDNA library was constructed using the TruSeq® DNA PCR-Free Sample Preparation Kit (Illumina, San Diego, CA, USA). The library quality was evaluated on the Qubit@ 2.0 Fluorometer (Thermo Scientific, MA, USA) and Agilent Bioanalyzer 2100 system. Finally, the library was sequenced on the Illumina HiSeq 2500 platform after quality control.

The high-quality sequence data was obtained via removing low quality reads, duplication reads, adapter contamination, and removing reads shorter than 35 bp. The remaining sequences were mapped to the databases of bacteria, fungi, mycobacterium tuberculosis, parasite, virus, and then we got the results, which were usually obtained within 24 to 48 hours.

Two experienced infectiology experts jointly determined the PMseq results as positive or negative, and whether the patient’s PMseq results were consistent with clinical infection. Clinical infection or non-infection was determined comprehensively through the patient’s symptoms, signs, chest imaging, and laboratory examinations by another two infectiology experts. This was reevaluated until consensus was reached when disagreements occurred. In addition, a reexamination may be required as appropriate.

Characteristics of the enrolled patients 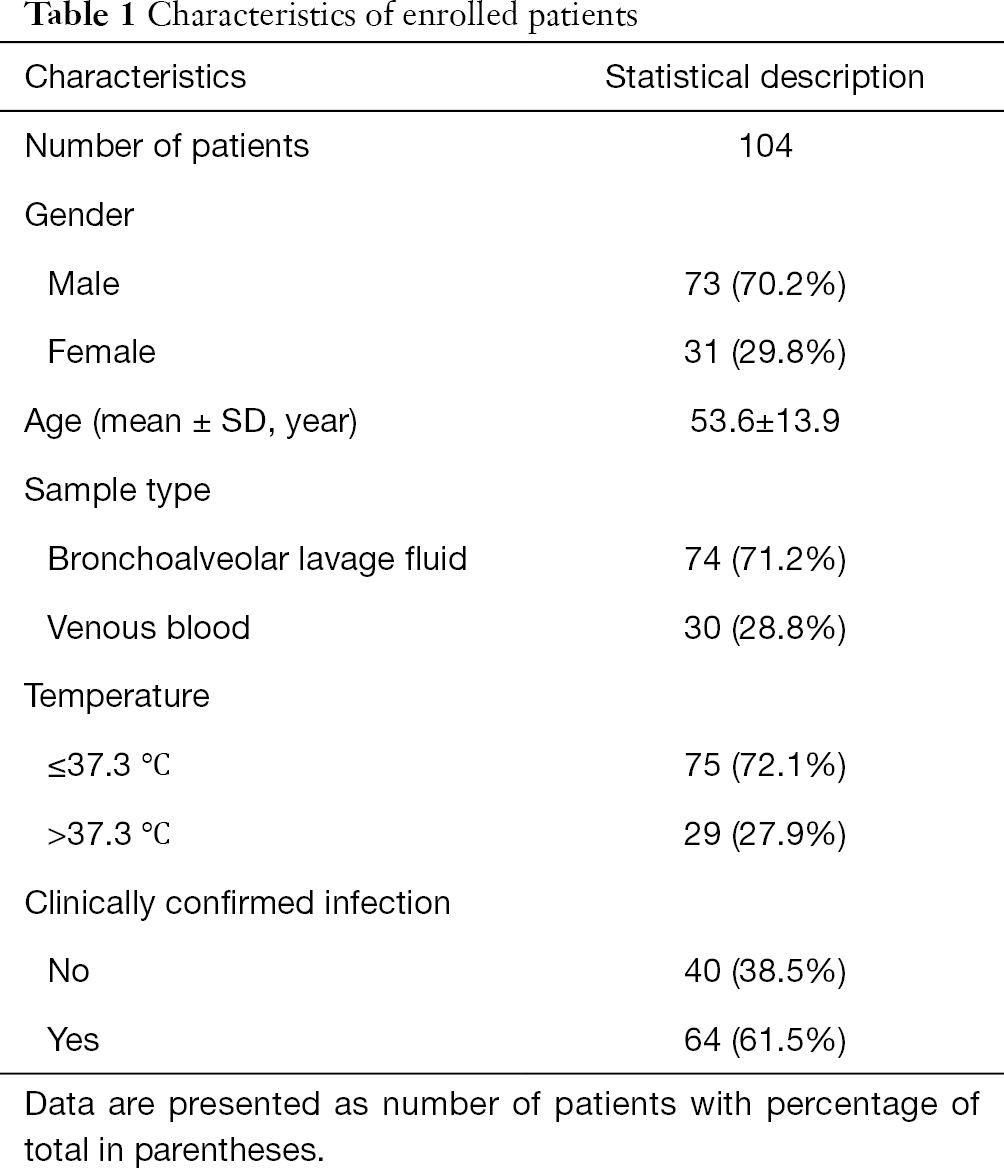 Comparison of positive rates between traditional methods and PMseq 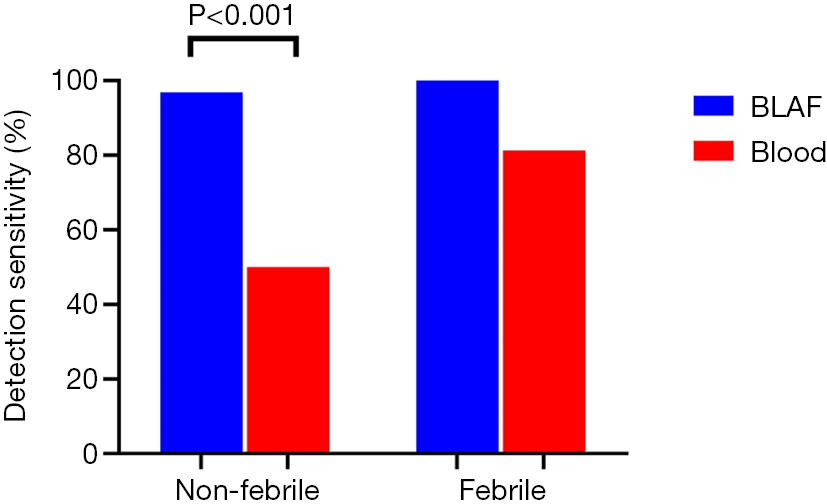 The identification of disease-causing pathogens mainly depends on the culture of organisms in the laboratory or the use of specific antibodies and probes based on the sequences of the organism. Nevertheless, these methods are limited in some cases. For example, some microbes are hard to cultivate in the laboratory. For diseases that can be manifested by cultivable organisms, microbiological assays may have a high false negative rate (16). The high false negative rate results in low sensitivity of these assays (17). Metagenomic sequencing is a promising and noninvasive method which involves high-throughput sequencing of complex samples composed of nucleic acids from multiple organisms. When traditional diagnostic assays indicate a novel agent, metagenomic sequencing is usually used to follow up (18-20). In this study, we retrospectively analyzed the detection sensitivity of PMseq for detecting pulmonary infections in BALF and venous blood samples of patients with or without fever. Compared with traditional culture, PMseq showed a higher sensitivity in patients with pulmonary diseases. Because PMseq has the advantages of short detection time and wide detection range, it could have certain application value in patients with pulmonary diseases.

In conclusion, our study revealed that PMseq has a higher detection sensitivity for pulmonary diseases compared with traditional culture. For patients without fever, BALF is recommended instead of venous blood samples because of the higher sensitivity. However, for patients with fever, venous blood samples can be used, as the detection sensitivity is very close to that of BALF. This study may provide the basis for the further application of PMseq in clinical practice, and contribute to the diagnosis and treatment of pulmonary infectious diseases.

This study has some limitations. It was a retrospective study, and the number of subjects enrolled was not sufficient. Despite this, the results have certain value for clinical work. We will expand the sample size in future work to further verify the conclusions.

Funding: This study was supported by the Fundamental Research Funds for the Central Universities (No. 22120180535) and Dream Mentor-Freshman Training Program of Shanghai Pulmonary Hospital (No. fkxr1901).

Reporting Checklist: The authors have completed the MDARR reporting checklist. Available at http://dx.doi.org/10.21037/atm-21-1322

Conflicts of Interest: All authors have completed the ICMJE uniform disclosure form (available at http://dx.doi.org/10.21037/atm-21-1322). The authors have no conflicts of interest to declare.

Ethical Statement: The authors are accountable for all aspects of the work in ensuring that questions related to the accuracy or integrity of any part of the work are appropriately investigated and resolved. All procedures followed were in accordance with the ethical standards of the responsible committee on human experimentation (institutional and national) and with the Helsinki Declaration (as revised in 2013). The study was approved by the Institutional Review Board of Shanghai Pulmonary Hospital (No. K21-227). Written informed consent was obtained from all patients for being included in the study.