Research progress of circRNA as a biomarker of sepsis: a narrative review

Sepsis is an organ dysfunction formed by the abnormal response of the body to various infections that threaten life (1). In 2017, the global age-standardized mortality rate for sepsis was 148.1 [95% uncertainty interval (UI) 136.4–161.0] per 100,000 population (2). Although research on sepsis is increasing, sepsis is still a global problem. The pathogenesis of sepsis is complex and includes inflammatory response imbalance, immune dysfunction, mitochondrial damage, coagulation disorders, endoplasmic reticulum stress, autophagy, and other pathophysiological processes, resulting in organ dysfunction (3). At present, some biomarkers used for the clinical diagnosis of sepsis, such as interleukin-6, C-reactive protein, and procalcitonin, have low specificity and sensitivity, the severity and recovery of sepsis cannot be well judged, nor can it be well used in clinical practice (4). Therefore, finding suitable biomarkers is important for the diagnosis and treatment of sepsis.

Circular RNAs (circRNAs) were first discovered in viruses in the 1970 (5). With the development of bioinformatics techniques, such as high-throughput sequencing, more and more circRNAs have been found in a variety of cells. Increasingly, studies have found that circRNAs play an important role in gene transcription (6). CircRNAs participate in a variety of cellular events, including proliferation, differentiation, autophagy, and apoptosis (7), and are closely related to sepsis.

We present the following article in accordance with the Narrative Review reporting checklist (available at http://dx.doi.org/10.21037/atm-21-1247).

CircRNAs are generally formed by cyclization of special mRNA through classical splicing and reverse splicing, with a length of about 100 nucleotides (9). Some recent studies have shown that a canonical splicing mechanism produces covalently closed circRNAs through a process called reverse splicing. Different from common linear RNAs (including 5' and 3' ends), circRNAs have a closed ring structure, no 5' and 3' ends, are not affected by RNA exonuclease.

In our in-depth study of RNAs, a large number of circRNAs were found to have many important biological functions, such as being miRNA molecular sponge to regulate the concentration of miRNA in body fluids, regulating cell gene transcription and translation, participating in regulating protein translation, and acting as a protein sponge to regulate protein content in cells (14). At the same time, circRNAs are also involved in the immune response of organisms and the regulation of immune diseases (15). The half-life of circRNAs are longer than that of homologs and is more stable (16), and circRNAs act as an miRNA sponge (17). These biological functions and characteristics indicate the potential of circRNAs as markers of sepsis.

Relationship between circRNAs and sepsis

Although there has been very little study on circRNAs as an indicator of sepsis, it is considered that circRNA has the potential to be a biomarker of sepsis because of its characteristics and its role in the pathogenesis of sepsis.

Bao et al. found that 11 and 126 circRNAs were significantly upregulated and downregulated in septic mice compared with controls, respectively (P≤0.05, fold change ≥2), and that differentially expressed circRNAs had a high multiple change (fold change >4, P<0.05) (22). Nie et al. found that compared with the control group, there were 373 up-regulated circRNAs and 428 down-regulated circRNAs in the aortic tissues of animals in the sepsis group, while there were 2,063 up-regulated and 2,903 down-regulated mRNAs in the sepsis group (23).

Because circRNAs can regulate a variety of different molecular mechanisms, including inflammation and immune response, as well as multiple biological processes in a variety of metabolic organs (24), they may play a key role in the occurrence and development of sepsis.

MiRNAs are small, evolutionarily conserved RNA molecules that are widely distributed in the human body; they can regulate about 30% of protein-coding genes (25). Due to their important role in the regulation of gene expression, there is great interest in the regulatory mechanisms that can regulate the function of miRNA.

With the continuous progress of various studies, it has been found that circRNAs have miRNA response elements, thus circRNAs have the ability to bind miRNA molecules to regulate miRNA activity (26). This activity is often referred to as the molecular sponge effect of circRNAs. Because miRNAs target multiple coding RNAs, circRNAs as molecular sponges will affect the expression of multiple genes (22). An increasing number of studies (27,28) have shown that circRNAs play an important role in the regulation of gene expression, partly because they inhibit the activity of miRNA, and this biological funtion of inhibiting activity is mainly realized by acting as a molecular sponge for binding to miRNAs.

Role of circRNAs in inflammation

The obstructive response of the host to various invasive molecules leads to the imbalance of inflammation, which is the most important basis in the pathogenesis of sepsis and is involved in the entire process of sepsis.

Yang et al. found that RNA plays an important role in the inflammatory model of pulmonary macrophages induced by SiO2 (19). This study analyzed the molecular mechanism and function of circRNAs in the process of apoptosis, proliferation, and migration were analyzed. The results are shown in Figure 1. 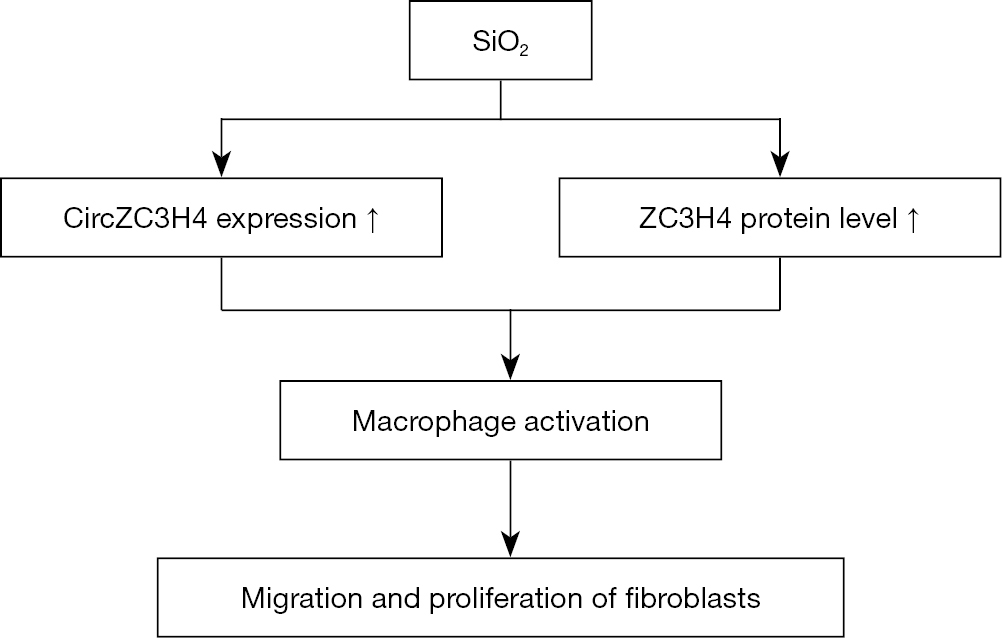 Figure 1 The function of circZC3H4 RNA in the inflammatory model of pulmonary macrophages induced by SiO2.

The findings of the present study indicate that there is a relationship between the activation of macrophages induced by SiO2 and the circZC3H RNA/ZC3H4 pathway, and demonstrates that circRNAs are involved in the inflammatory response of pulmonary macrophages in the pathological process of silicosis.

In addition, Zhang et al. found that 12 circRNAs were upregulated and 2 circRNAs were downregulated in patients with SLE(Systemic Lupus Erythematosus) (32). The findings of their study confirmed that the downregulation of hsa_circ_0012919 not only increased the expression of DNMT1 and decreased the expression of CD70 and CD11a but also reversed the deficiency of DNA methylation of CD11a and CD70 in SLE CD4+ T cells, and reversed DNMT1 through downregulation. The abnormal expression of circ_0012919 in CD4+ T cells was found to support the role of circRNAs in mediating inflammation.

Role of circRNAs in immunosuppression

Although there is a stress response in the immune system in the early stage of sepsis, immunosuppression may occur at the end of this stage, which seriously affects the survival of patients (3).

Circ_0005075 participates in the regulation of miR-23a-5p and miR-23b-5p23 (26). The expression of miR-23a-5p is upregulated during sepsis, which leads to acute respiratory distress syndrome induced by lipopolysaccharides (36). The activation of myocardial fibrosis by miR-23b is a key factor in the development of myocardial dysfunction in the late sepsis. At the same time, miR-23b inhibitor can reduce cardiac fibrosis in advanced sepsis. Blocking the expression of miR-23b may be an effective method to prevent septicemia induced cardiac dysfunction (37). This suggests that circ_0005075 may play a role in the treatment of sepsis.

Role of circRNAs in coagulation dysfunction

Under normal physiological conditions, the activation of the coagulation system is regulated by the following three important physiological anticoagulation pathways: the tissue factor pathway inhibition system, the activated protein C system, and the antithrombotic system; these systems regulate the systematic activation of clotting (38). All three pathways show a certain degree of disorder during sepsis.

Coagulation dysfunction is an important clinical manifestation in the process of sepsis. Endothelial cells play a key role in maintaining vascular homeostasis and activating different physiological and pathological processes of the blood system, such as thrombosis, inflammation, and vascular remodeling (39). Chen et al. found that endothelial cell apoptosis can worsen sepsis (40).

Therefore, we can speculate that the abnormal expression of circRNAs will lead to endothelial function, and even coagulation dysfunction, and ultimately affect the occurrence and development of sepsis.

CircRNAs are involved in host resistance to viruses

There only a few studies on the involvement of circRNAs in viruses resistance, but there are also related results.

Li et al. demonstrated that the double-stranded RNA domain containing the immune factor NF90/NF110 is a key regulator of circRNA biogenesis (42). NF90/NF110 promotes the production of annular RNA in the nucleus by combining with intronic RNA pairs that juxtapose circRNAs to form exon(s); and the NF90/NF110 also interact with mature circRNAs in the cytoplasm. When the host is infected with the virus, the expression of circRNAs decreases, in part because the nucleus exports NF90/NF110 to the cytoplasm. At the same time, NF90/NF110 that is released from the circRNA complex binds to viral mRNA as part of its antiviral immune response. This indicates that circRNAs are involved in the antiviral process of the host.

The pathogenesis of sepsis is extremely complex. Understanding the molecular mechanism in the occurrence and development of the disease is the only way to understand its biomarkers and specific treatments. Increased research on circRNAs provides a new direction to diagnose and treat sepsis. With increasing studies on circRNAs, we have reason to believe that circRNAs will become a hotspot of sepsis research, and these researches will have a broad development prospect.

Other biological characteristics of circRNAs, such as tissue specificity, stability in blood, and relatively long half-life, not only make it a biomarker but also a new target for the diagnosis and treatment of sepsis.

At present, the research on the formation, classification, characteristics, and biological functions of circRNAs are in the initial stage. There is no corresponding clinical data, and a large number of clinical samples are needed for detection and analysis. The expression and regulation of circRNA genes and their role in the occurrence and development of sepsis warrant further study.

Conflicts of Interest: All authors have completed the ICMJE uniform disclosure form (available at http://dx.doi.org/10.21037/atm-21-1247). The authors have no conflicts of interest to declare.