Observation of the impact of the eight-step process combined with the four-track crossover quality control applied to patients with glioma surgery: a randomised trial

Gliomas are neural tumors which constitute about 46% of all intracranial tumors (1). At present, the pathogenesis of glioma is not clear, it is a typical abnormal gene expression tumor, there are a lot of abnormal gene expression. Some researchers collected glioma tissues and normal brain tissues for microarray analysis, and found 476 differentially expressed circRNAs (2) and more than 600 differentially expressed lncRNAs (3) in glioma tissues and brain tissues. However, the role in the pathogenesis remains to be studied. Surgical treatment is recognized as the most effective method for the treatment of glioma, which advocates safe and wide range of tumor resection. Due to the growth mode of glioma cells is diverse and infiltrating, and it is difficult to distinguish the boundary between tumor and normal brain tissue during surgery, it is difficult to achieve total tumor resection. With the continuous development of modern medicine, including the application of new technologies such as multimodal magnetic resonance imaging technology, intraoperative electrophysiological detection, fluorescence guidance technology, intraoperative wake-up, intraoperative neuronavigation etc. to provide maximum safe tumor resection possible (4,5). Postoperative patients with glioma are subject to both physical and psychological stress. The psychological burden of patients is large, and cancer-related fatigue occurs easily, which affects the treatment effect and results in a significant decline in the quality of life (6). Microsurgery has obvious advantages in improving patients’ cognition and quality of life (7). Although routine postoperative care can achieve certain results, there are still many shortcomings. The eight-step process summarizes the various interventions after surgery and formulates corresponding standardized processes which allow intervention staff to implement postoperative care according to the process, thereby reducing nursing errors (8). The four-track crossover quality control can effectively control and improve nursing quality and help patients recover as soon as possible (9). This study is designed to develop an eight-step process for patients with glioma, formulate the process of postoperative care in chronological order, and train and assess nursing staff. At the same time, four-track cross-over quality control is used for various postoperative care of glioma. Comprehensive monitoring of work is helpful for nursing staff to complete nursing tasks according to quality control content and reduce nursing vacancies. At the same time, through multi-level cross-over quality control, the gaps in the work can be found and remedied in time, so as to fully understand the inner condition of patients and make decisions Accurate evaluation and provide professional psychological counseling to promote the elimination of common anxiety and depression. The purpose of the present study was to explore the effect of an eight-step process combined with four-track quality control applied to patients undergoing glioma surgery.

We present the following article in accordance with the CONSORT reporting checklist (available at http://dx.doi.org/10.21037/atm-21-1228).

A total of 122 patients undergoing glioma surgery admitted to our hospital from March 2017 to March 2020 were selected and divided into two groups according to the random number table method, each with 61 cases. The inclusion criteria were as follows: (I) age between 18–60 years old; (II) patients were diagnosed as glioma by imaging examination; (III) surgery was successfully completed; (IV) the patient’s consciousness was clear; (V) the patients and their families signed informed consent documents. The exclusion criteria were as follows: (I) patients with other tumors; (II) patients with severe infection; (III) patients with a history of craniocerebral trauma surgery; (IV) patients with mental abnormalities; (V) patients with cognitive impairment; (VI) patients with poor compliance. The study was approved by the Ethics Committee of The First Affiliated Hospital of Soochow University and conducted in accordance with the Declaration of Helsinki (as revised in 2013). All subjects provided informed consent.

Through consulting relevant literature combined with past clinical experience, an eight-step process combined with four-track cross-over quality control intervention was established for the observation group, and comprised the following: (I) after the operation room nurses escorted the patients back to the ward, they handed over the patients face to face with the responsible nurses. The responsible nurses fully mastered the operation conditions of the patients and made relevant records. The operation room nurses and the responsible nurses consulted and then entered notes and signed the clinical record together. (II) Intervention staff helped the patients lay in the side-lying position with the healthy side up and raised the bed head angle to 15–30° while maintaining a stable blood pressure and conscious state in patients. The intervention staff assisted patients to turn over within 24 hours after the operation, advised them to avoid coughing as much as possible, and explained the importance and significance of each postoperative intervention to improve compliance. (III) Intervention staff implemented close monitoring of each patient’s vital indicators, used the Glasgow coma score, and immediately notified doctors and recorded any significant increase in intracranial pressure. (IV) Intervention staff regularly observed whether the patient’s incision had oozing or seepage, changed the dressing in a timely manner, and fixed the indwelling drainage tube at the same level of the patient’s head after the operation. The patient’s urinary catheter was removed between 6 hours and 24 hours after their awakening from anesthesia, and the drainage bag was clamped for patients who needed to be transported. (V) Intervention staff strengthened the respiratory management of patients after the operation by giving continuous oxygen inhalation at 2 L/min, patted the patients on their backs, and turned them over regularly to avoid complications such as lung infections. (VI) Patients were given a 2,000 mL fluid infusion on the first day after operation. The amount of rehydration was then gradually reduced from the second day and stopped on the third day. Patients could be given a 250 mL nutrient solution 6 hours after operation, liquid food could be given on the first day after operation, and normal food could be taken on the second day after operation. (VII) After the patient was awake after anesthesia, intervention staff guided them to perform exercises such as extension and flexion of the lower limbs and ankle pump current. After 1 day, if progressing appropriately, patients could get out of bed and perform dyskinesia limb function under the guidance of intervention staff. (VIII) During the handover, the intervention staff of each class recorded the changes in the patient’s condition in detail and cooperated with each other, to provide comprehensive care for each patient. The four-track cross-over quality control involved the self-inspection track of intervention personnel, the review track of shift handover, the mutual inspection track of shift personnel, and the mobile detection track of management personnel. The quality control table of postoperative nursing of glioma was designed, which mainly including micturition nursing, respiratory tract management, posture nursing, condition monitoring, ward management, medication nursing, drainage tube nursing, surgical incision nursing, and urination nursing. If the above quality control items were not completed, this was recorded as a nursing omission and corresponding measures were taken to address the matter. Intervention staff summarized and analyzed the occurrence of nursing defects every week and discussed and formulated effective corrective measures when required.

The catheter removal time, initial eating time, time of getting out of bed, and hospitalization time were recorded.

The Quality of life

The Generic Quality of Life Inventory-74 (GQOLI-74) was used to evaluate the quality of life. GQOLI-74 includes four dimensions, each with 0–100 points, and a higher score indicate a higher quality of life (11). 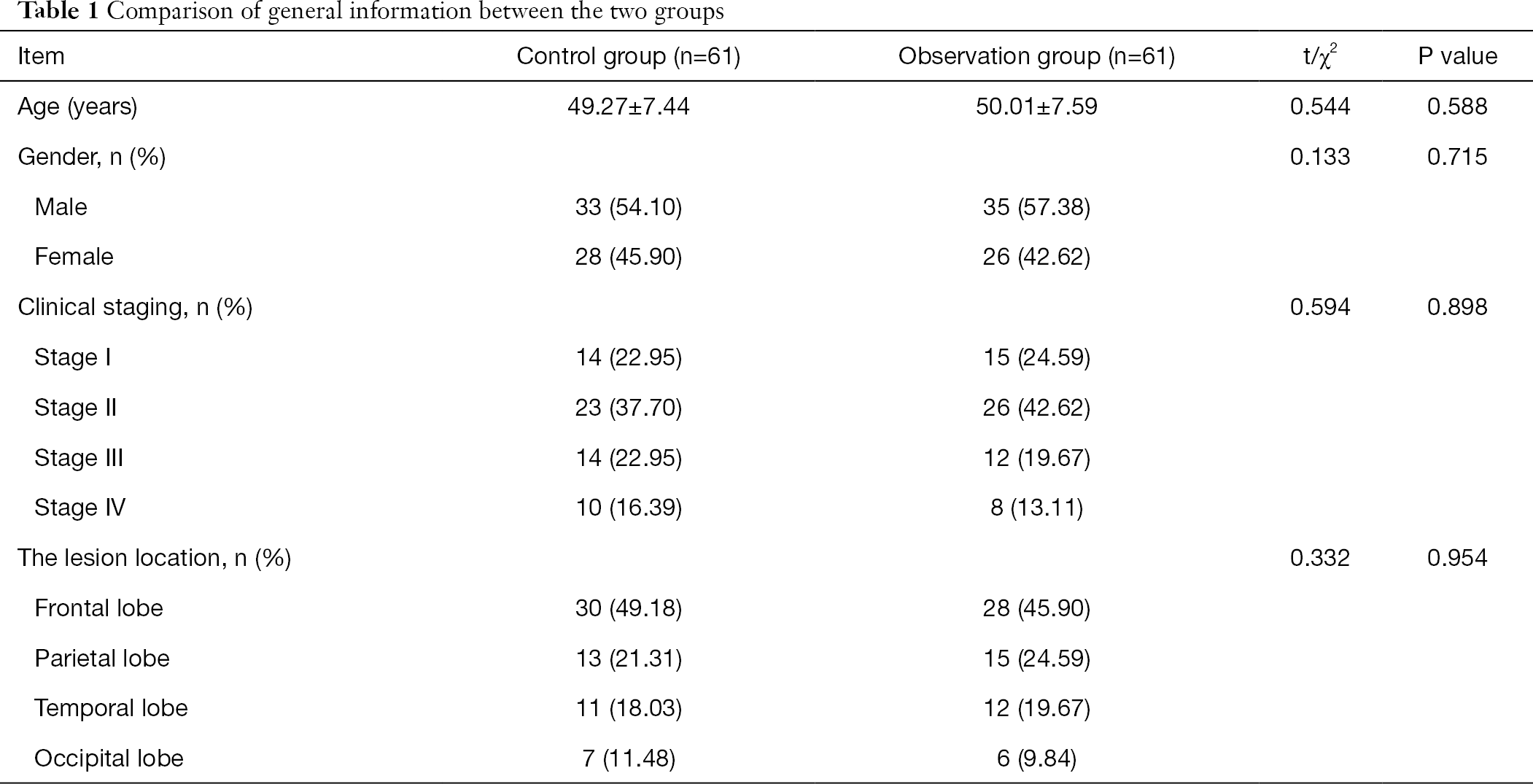 The quality of life

While surgical treatment is currently the main treatment for patients with glioma, there are certain risks in the operation. The traction and stress reaction of related brain tissue during surgery can cause complications such as cerebral edema, which in turn affects the prognosis of patients (12,13). Postoperative cognitive dysfunction (POCD) refers to the slight damage to the brain’s advanced cortical function after anesthesia and surgery, which affects the patient’s memory, attention and information processing capabilities, and is a mild neurocognitive disorder. POCD not only reduces the quality of postoperative recovery and prolongs the length of hospitalization, but also leads to permanent cognitive dysfunction in individual cases, which reduces the quality of life of patients (14). Therefore, the selection of appropriate anesthetics may be of great significance in reducing the incidence of POCD in patients undergoing meningioma resection. At the same time, due to the complexity of postoperative nursing work, intervention staff are prone to nursing omissions in daily nursing, which not only affects the postoperative recovery of patients, but also causes medical disputes (15). Standardized nursing according to the intervention process can effectively reduce surgical complications help patients quickly recover (16). This study achieved good results by implementing an eight-step process combined with four-track cross-over quality control interventions for postoperative patients with glioma.

The catheter removal time, initial eating time, time of getting out of bed, and hospitalization time of the observation group were shorter than those of the control group (P<0.05). This showed the eight-step process combined with four-track cross-over quality control interventions could effectively promote the postoperative recovery of patients with glioma. This is because the eight-step process interventions formulate a scientific nursing process, allowing intervention staff to quickly grasp the key points when implementing nursing operations and reducing nursing errors (17,18). Further, the use of the four-track cross-over quality control intervention in the nursing process involving features such as vital signs monitoring, complications prevention, and pipeline management can not only implement real-time monitoring of postoperative nursing work, but also supervise and intervene to complete various postoperative nursing tasks avoiding nursing omissions (19). In addition, the four-track cross-over quality control can detect problems in nursing work in time and implement corresponding remedial measures to help patients recover as soon as possible after surgery (20).

Reporting Checklist: The authors have completed the CONSORT reporting checklist. Available at http://dx.doi.org/10.21037/atm-21-1228

Conflicts of Interest: All authors have completed the ICMJE uniform disclosure form (available at http://dx.doi.org/10.21037/atm-21-1228). The authors have no conflicts of interest to declare.

Ethical Statement: The authors are accountable for all aspects of the work in ensuring that questions related to the accuracy or integrity of any part of the work are appropriately investigated and resolved. The study was approved by the Ethics Committee of The First Affiliated Hospital of Soochow University and conducted in accordance with the Declaration of Helsinki (as revised in 2013). All subjects provided informed consent.