Idiopathic sudden sensorineural hearing loss (ISSNHL) is an emergency in the department of otolaryngology. It has been defined as a loss of at least 30 dB over at least three frequencies in an audiogram within a 3-day period (1). The majority of cases are unilateral, while bilateral simultaneous or successive involvement accounts for 0.4–4.9% of all ISSHL cases (2). The presenting symptom is fullness or blocked ear, partly accompanied by tinnitus and dizziness (3,4). The incidence in adults varies from 2–30 per 1,00,000. However, it has been reported that Germany has an incidence of as high as 160 per 1,00,000 individuals per year (5,6).

The prognostic factors of ISSNHL remain controversial. Some studies have proposed that the prognostic factors are varied, including the type of audiogram, the duration and severity of hearing loss, age, and accompanying symptoms (7). Meanwhile, other studies have found that hypertension, hypercholesterolemia, and hyperglycemia affect prognosis (8). Hyperlipemia is one of the risk factors of cardiovascular disease, which increases blood viscosity and alters vasomotion (9). Recent reports have identified hypercholesterolaemia as a significant risk factor for ISSNHL (10,11). A systematic review and meta-analysis of the relationship between serum lipids and ISSNHL did not provide evidence for the association between them, nor did it definitively rule out such an association (12). Thus, additional studies are needed to ascertain the relationship, or lack thereof, between serum lipids and ISSNHL.

Given that the relationship between lipids and the prognosis of ISSNHL has not been confirmed, we aim to illuminate this relationship in this prospective cohort study.

We present the following article in accordance with the STROBE reporting checklist (available at http://dx.doi.org/10.21037/atm-21-907).

This is a prospective cohort study. The study was approved by the Ethics Committee of The Second Affiliated Hospital of Shanghai University. All procedures performed in this study involving human participants were in accordance with the Declaration of Helsinki (as revised in 2013). Informed consent was taken from all the patients.

This study was conducted in The Second Affiliated Hospital of Shanghai University.

We researched ISSNHL patients who were admitted to the Department of Otolaryngology at the Second Affiliated Hospital of Shanghai University from June 2015 to March 2017.

Treatments consisted of high-dose steroids (intravenous administration of methylprednisolone sodium succinate (60 mg) for 5 days and oral methylprednisolone tablets (20 mg/day) for another 3 days and vasoactive substances (Ginko Biloba Extract). After hospitalization, patients underwent a pure-tone audiogram (PTA) once every 5 days, and were followed up for 6 months after discharge. The patients were advised to have out-of-hospital rehabilitation including control cardiovascular risk factors, eating a light diet, avoiding fatigue and avoiding exposure to noisy environment. Patients who were followed up for less than one month were withdrawn from the study.

At the end of the follow-up period, the outcome assessment was based on the Clinical Practice Guideline: Sudden Hearing Loss from the American Academy of Otolaryngology-Head and Neck (1). The outcome was classified as either recovery or no recovery:

We used Stata 14.0(Stata Corp, America) for statistical analysis. Dichotomous variables were expressed as a percentage, and comparisons between the groups were determined by the chi-square test. Continuous variables were expressed as mean and standard deviation, and comparisons between the groups were determined by variance analysis. Logistic regressions were used to establish the correlation between TC, TG, LDL-C, and LDL-C/HDL-C ratio and prognosis after adjustment for potential confounding factors (covariates included age, gender, hypertension, diabetes, vertigo, TC, TG, LDL-C, LDL-C/HDL-C ratio). P values <0.05 were considered statistically significant.

258 patients with ISSNHL were enrolled from June 2015 to March 2017. Follow-up was completed in 232 patients, and 26 patients were lost to follow-up and dropped out from the study. 1 patient withdrew due to a sudden outbreak of chickenpox, and the other 25 patients withdrew due to followed up for less than one month. Among 232 cases of ISSNHL, 113 cases (48.71%) were in the right ear and 119 cases (51.29%) were in the left ear. There were 105 males (45.3%) and 127 females (54.7%). Patients were classified into two groups (recovery and no recovery) according to their degree of hearing recovery. We analyzed the differences in demographic characteristics between participants in the two groups, including gender, age, diabetes hypertension, dizziness, and time from onset to treatment (Table 1). The differences in the time from onset, dizziness, and hypertension between the two groups were statistically significant (P<0.05). 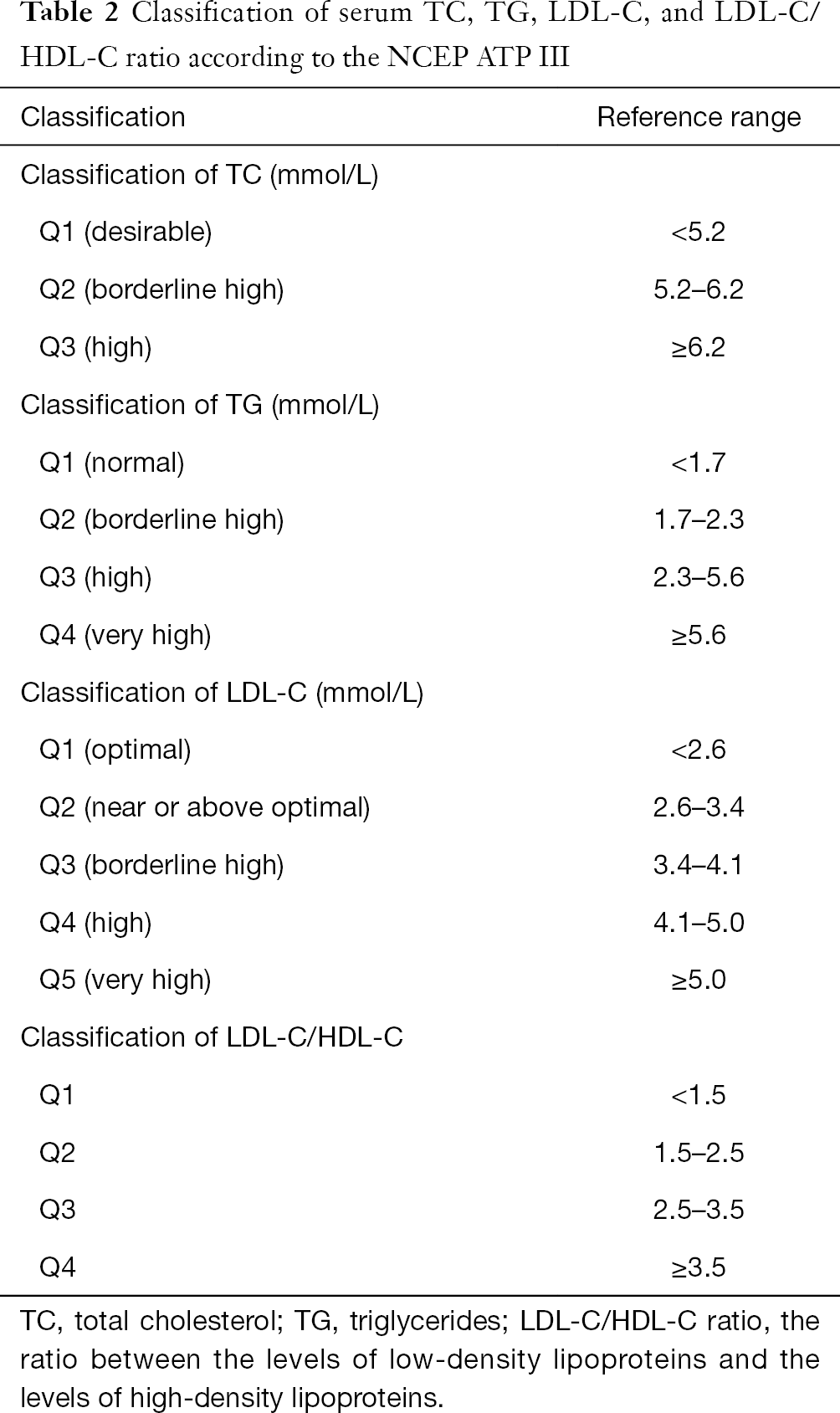 According to our analysis of the demographic characteristics, the time from onset, dizziness, and hypertension were found to affect prognosis. To eliminate the influence of these factors, univariate and multivariate analyses were performed. The adjusted covariates included age, sex, as well as the presence of hypertension, diabetes, and vertigo. 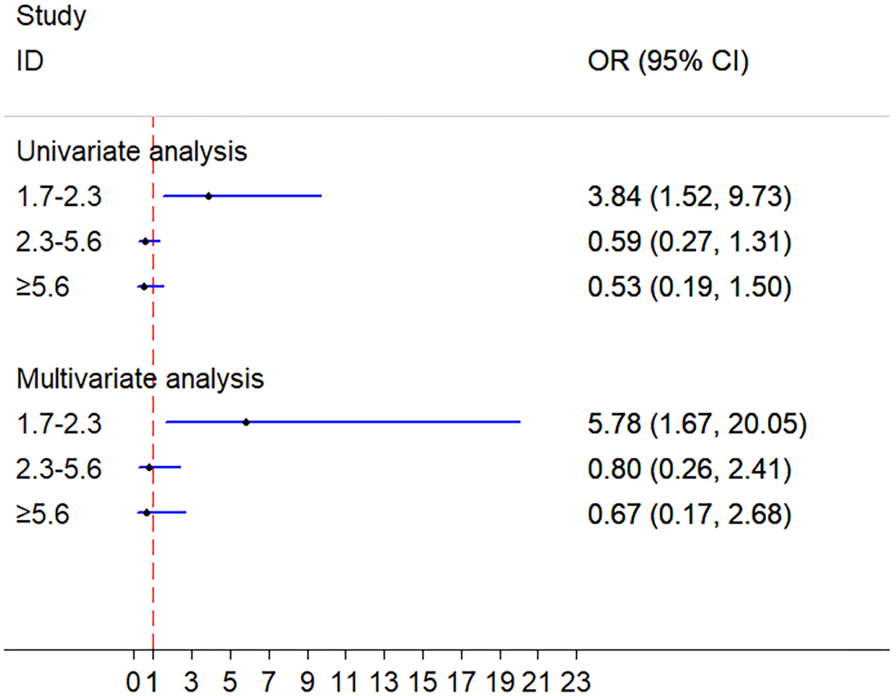 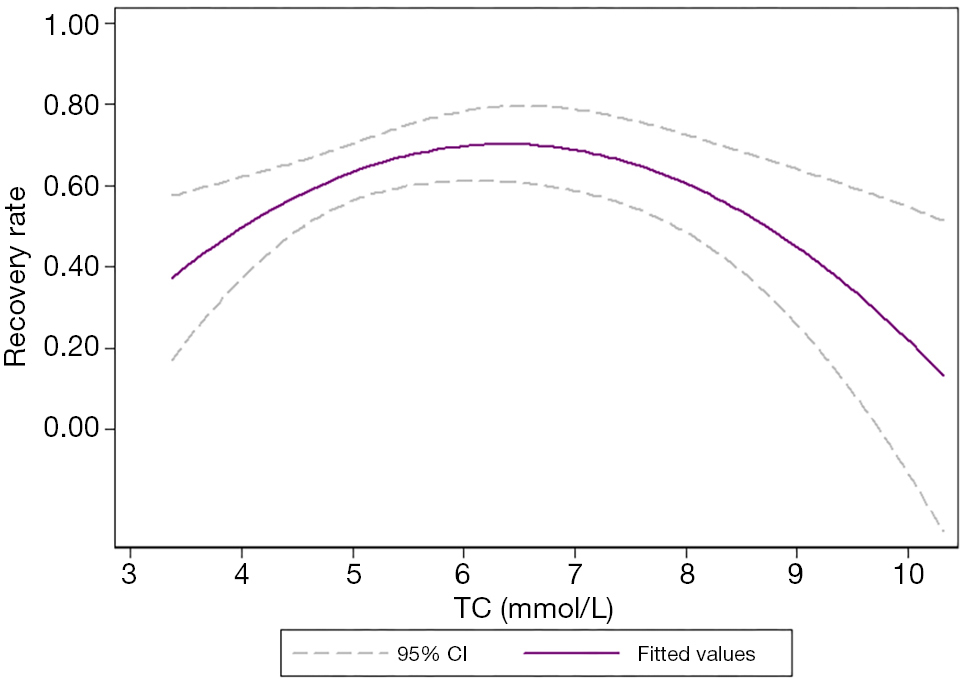 Figure 4 Curve fitting showed that with the increase in TC concentration, the recovery rate initially increased and then decreased, presenting an inverted “U” shaped distribution. The middle purple line represented the fitted values, and the upper and lower dashed lines represented the 95% confidence intervals. TC, total cholesterol. 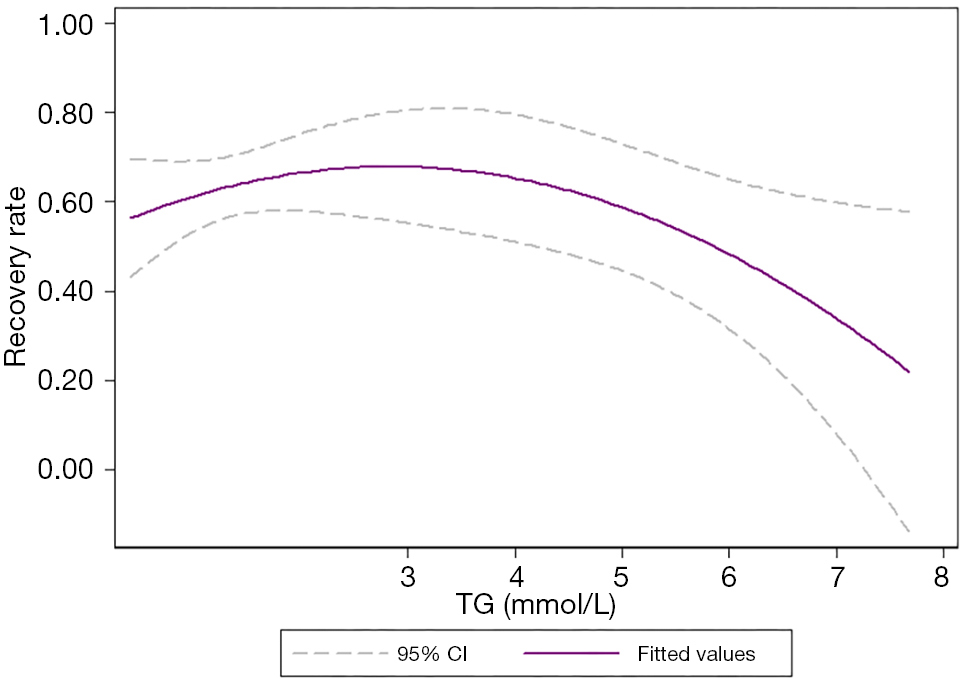 Figure 5 Curve fitting showed that with the increase in TG concentration, the recovery rate initially increased and then decreased, presenting an inverted “U” shaped distribution. The middle purple line represented the fitted values, and the upper and lower dashed lines represented the 95% confidence intervals. TG, triglycerides.

Figure 6 Curve fitting showed that with the increase in the LDL-C/HDL-C ratio, the recovery rate decreased. The middle purple line represented the fitted values, and the upper and lower dashed lines represented the 95% confidence intervals. LDL-C/HDL-C ratio, the ratio between the levels of low-density lipoproteins and the levels of high-density lipoproteins.

At present, the pathogenesis of ISSNHL is unclear. Viral infection, microcirculation disorder, autoimmune disease, cochlear membrane injury and stress are thought to be related to the onset of ISSNHL (14), and vascular endothelial dysfunction may also be involved (15). The structure and function of blood vessels, as well as the physicochemical properties of blood and hemorheology are the factors influencing normal blood flow. Abnormal blood or blood vessels can both lead to reduced blood flow, or even cause microcirculation disturbance (16). Abnormal blood lipid levels will result in changes in whole blood viscosity, which will lead to the disturbance of microcirculation and eventually to a lack of blood supply to target organs (17). If this occurs in the ear, it can lead to sudden sensorineural hearing loss.

Raised serum lipid levels increase the risk of cardiovascular disease and strokes (18). In recent years, the response-to-retention hypothesis of atherosclerosis has been gradually recognized. This hypothesis proposes that lipoprotein retention within the arterial wall is the key event in atherogenesis. The plasma concentration of LDL cholesterol must exceed 2 mmol/L for atherogenesis (19). In addition, coenzyme Q plays an important role in atherosclerosis. It can reverse many cellular changes of atherosclerosis, such as dysregulation of cholesterol biosynthesis, impaired autophagy flux, and mitochondrial dysfunction. Many studies have demonstrated that CoQ reduces macrophage accumulation, foam cell formation and lipid accumulation through reverse cholesterol transport (RCT) and activate of AMP-activated protein kinase (AMPK). Cholesterol accumulation and high level of LDL-C leads to secondary CoQ deficiency and weaken the protective effect of coenzyme Q on atherosclerosis (20). Moreover, there are studies show that the patients were under a greater degree of stress before the onset of ISSHL, indicating that stress is associated with the onset of ISSHL. Stress stimulation can promote the adrenal cortex to secrete cortisol, resulting in an increase in the level of serum free fatty acids and the ability of the liver to produce TC. Therefore, TC also reflects the stress level of patients in 1 to 2 months (21).

We hypothesized that when TC >6.2 mmol/L and TG >2.3 mmol/L, severe irreversible obstruction of the inner ear microvessels will lead to cochlear ischemia. If thrombolytic therapy misses the thrombolysis time window, the prognosis of patients is poor. When TC ranges from 5.2 to 6.2 mmol /L and TG ranges from 1.7 to 2.3 mmol/L, hypercholesterolemia increases the whole blood viscosity of the inner ear microvessels, which leads to hemorheological alterations and incomplete ischemia. However, the damage is reversible and the prognosis is good. When TC <5.2 mmol/L and TG <1.7 mmol/L, there may be other unspecified causes (such as an autoimmune reaction or viral infection) involved in the development of the disease. In these cases, the effectiveness of treatment is also poor.

Treatment of ISSNHL remains one of the most controversial issues in contemporary otolaryngology: although many countries have issued guidelines, the management of drug selection, dosage, time and route of administration is still not standardized. Systemic glucocorticoid is widely used standard primary treatment for ISSNHL which is recommended used whin 2 weeks of onset (1). To avoid the adverse drug reactive of systemic glucocorticoid in some patients and given the theoretical possibility of achieving higher blood concentrations in the inner ear, intratympanic steroid therapy may be used as a primary therapy alone or as a salvage therapy after failure of systemic steroids (26). As a salvage therapy, intratympanic steroid therapy should be given in 2 to 6 weeks of onset. However, the therapeutic effect of steroids is not always satisfactory. To avoid ineffective treatment and associated risks, complications side effects, costs, and potential adverse interactions with effective therapies, antivirals, thrombolytics, vasodilators, or vasoactive substances is not routinely used. It should be used appropriately in individualized treatment according to the condition. Ginko Biloba Extract (GBE) is recommended by Chinese Guidelines for diagnosis and treatment of ISSNHL. It contains flavones and terpenes, prevents the development of free radicals in cases of ischemic injury and also prevents vascular contraction. Studies have shown that GBE can improve the mean auditory threshold and the symptoms of tinnitus and dizziness (27).

Firstly, due to the lack of patients under 8 years old of age in this study, our research result is generalisable to the post-school population. Secondly, there were a certain percentage of spontaneous recovery rates of ISSNHL, which could not be excluded in this study. Thirdly, this study is an observational cohort study, as opposed to a clinical randomized controlled trial, and there were potential differences in patient baseline characteristics between the two groups, which will affect the statistical results.

Reporting Checklist: The authors have completed the STROBE reporting checklist. Available at http://dx.doi.org/10.21037/atm-21-907

Conflicts of Interest: All authors have completed the ICMJE uniform disclosure form (available at http://dx.doi.org/10.21037/atm-21-907). The authors have no conflicts of interest to declare.

Ethical Statement: The authors are accountable for all aspects of the work in ensuring that questions related to the accuracy or integrity of any part of the work are appropriately investigated and resolved. The study was approved by the Ethics Committee of The Second Affiliated Hospital of Shanghai University. All procedures performed in this study involving human participants were in accordance with the Declaration of Helsinki (as revised in 2013). Informed consent was taken from all the patients.