Major histocompatibility complex class I (MHC-I) molecules plays an important role in the cellular immune response, presenting peptides to cytotoxic T lymphocytes (CTL) and allowing the immune system to carefully examine ongoing biological processes within the cell (1). Many studies on immunotherapy have found that tumor-specific antigen peptides not only bind to MHC by means of low affinity, but also often exhibit function defects in antigen processing and presentation, leading to immune evasion (2). This poses a huge challenge to T cell-based immunotherapy. HLA-A plays an important role in anti-tumor immune response and tumor neoantigen discovery, and HLA-A*24 is an allelic type of HLA-A (3,4). HLA-A*2402 is one of the most common alleles in East Asian populations, especially in Japanese and Chinese populations (5,6). Recent studies on HLA-A*2402 have focused on the clinical application of HLA-A*2402 restricted antigen. In a study on the safety, immune response rate and clinical benefit of cancer vaccine combined with chemotherapy, it was found that patients with HLA-A*2402 positive, locally advanced, metastatic and/or recurrent gastrointestinal, lung or cervical cancer, their specific T cell response rate of HLA-A*2402 restricted tumor-associated epitope peptide was significantly correlated with longer overall survival (7). In another study of new vaccine therapy evaluating HLA-A*2402 positive recurrent/progressive high-grade glioma patients using a variety of glioma cancer antigens and glioma angiogenesis-related antigen peptides, was found that this therapy was well tolerated, without any serious systemic adverse events, and could induce a strong antigen peptide-specific T lymphocyte response (8). However, the above-mentioned studies only used a variety of HLA-A*2402 restricted antigen peptides in combination with other therapeutic methods for anti-tumor therapy, and did not further explore how to replace HLA-A*2402 residues through molecular simulations, in order to better improve their roles in the anti-tumor immune response. Increasing the complementarity between the binding clefts of peptides and HLA-A molecules by replacing HLA anchor residues was a common step to improve the binding capacity and antigenicity of antigen peptides (9,10). However, this change must be based on the allelic types of each HLA-A molecule and may recruit different specific CTLs due to the conformational change of the antigen peptide, thereby reducing the recognition probability of T cells (11). The efficient presentation of polypeptide-MHC-I class (pMHC-I) molecular complexes to T cells benefited from the stable interaction between polypeptides and MHC-I (12). Compared with affinity, the stability of the pMHC-I complex could better reflect the immunogenicity of CTL (13), but it was difficult to distinguish stability from other elements of MHC-I binding, such as affinity. In recent years, scientists’ interest in artificial neural networks (ANN) has increased day by day. It is a rough simulation of the information processing capabilities of the human brain. It is a modern and complex computing technology that plays a huge role in drug analysis, drug technology, and screening of new drugs (14,15). Scientists have established a high-throughput method for evaluating the stability of the pMHC-I complexes using an ANN method to predict the half-life of pMHC-I complex binding (16). There are two novel tools that identify with relatively high accuracy. The two tools consist of (I) the NetMHCpan-4.1 server predicts binding of peptides to any MHC molecule of known sequence (17), and (II) NetMHCstab-1.0 predicts the stability of peptide binding to a number of different MHC molecules (18). Researches on molecular docking of protein-peptide interactions are difficult and time-consuming tasks because peptides are generally more flexible than proteins and tend to adopt multiple conformations. In the process of searching for binding sites for peptides, both peptide and protein molecules have significant conformational flexibility (19,20). At present, using the flexible molecular docking method in virtual screening to predict the binding affinity of polypeptides with different MHC allotypes has proven to have a fairly high prediction accuracy (21). The intent of the present study was to understand the intermolecular force, binding affinity, binding energy, affinity predicted values, and stability predicted values of HLA-A*2402 with restricted antigen peptides. In addition, we further analyzed the results of the in vitro competitive binding test, as well as the correlation between other parameters, and explored ways to improve the stability of the p-HLA-A*2402 complex.

The polypeptide sequences of the HLA-A*2402 restricted antigen peptide and the results of the in vitro competitive binding test were obtained from the literature (22) and the affinity between the antigen peptide and HLA-A*2402 was predicted by the NetMHCpan v4.1 server (http://www.cbs.dtu.dk/services/NetMHCpan/) (17). The stability values of peptides and HLA-A*2402 were predicted by NetMHCstab v1.0 server (http://www.cbs.dtu.dk/services/NetMHCstab/) (18).

The crystal model of the peptide-HLA-A*2402 complex (PDB ID: 2BCK) was obtained from the PDB database (http://www.rcsb.org/) (23,24) and Auto Vina (25) was used to dock the HLA-A*2402 restricted antigen peptide to the HLA-A*2402 protein in a flexible docking manner. Maestro (Schrodinger, LLC, New York, NY, 2019) (26) analyzed the intermolecular force of the complex [hydrogen bond (HB) and pi-stack] and the binding affinity values of the complex, while Flexpepdock (27) further optimized the docking morphology of the restricted antigen peptides and HLA-A*2402, and analyzed the binding affinity values of the complex. MM-GBSA (28) calculated the binding free energy values of HLA-A*2402-restricted antigen peptide. The above process was performed under the premise that the parameters of each docking system and the kinetic simulation were consistent. 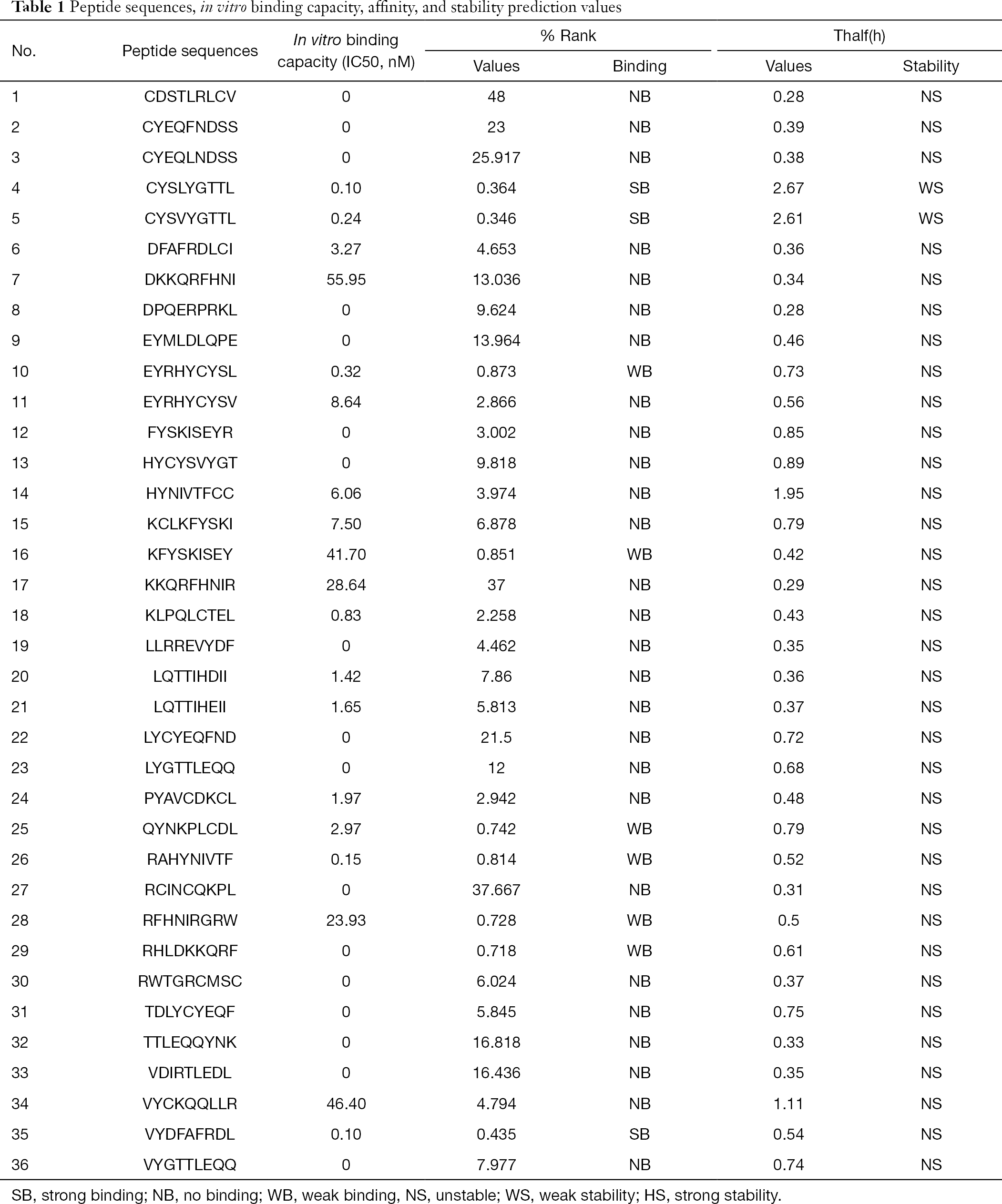 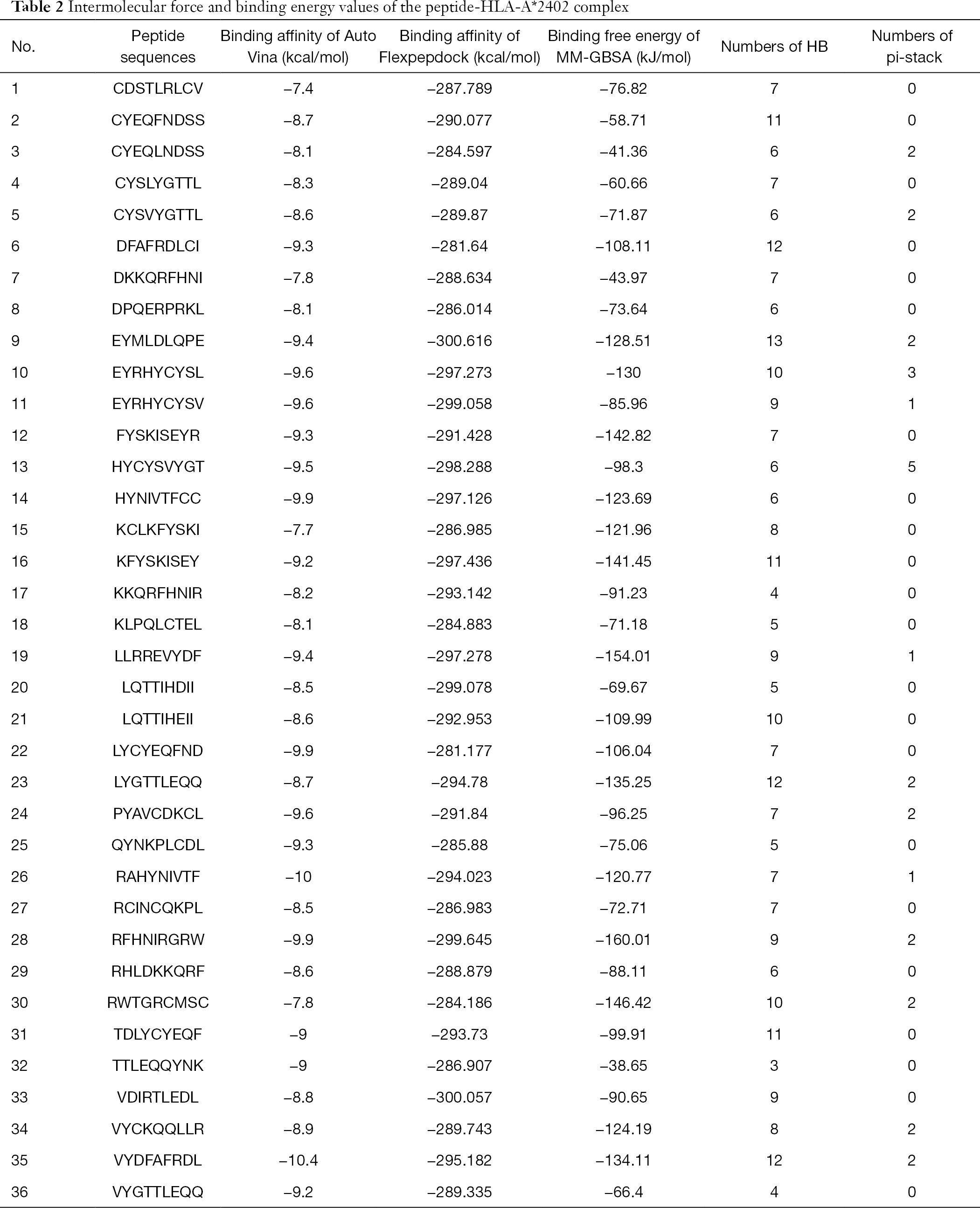 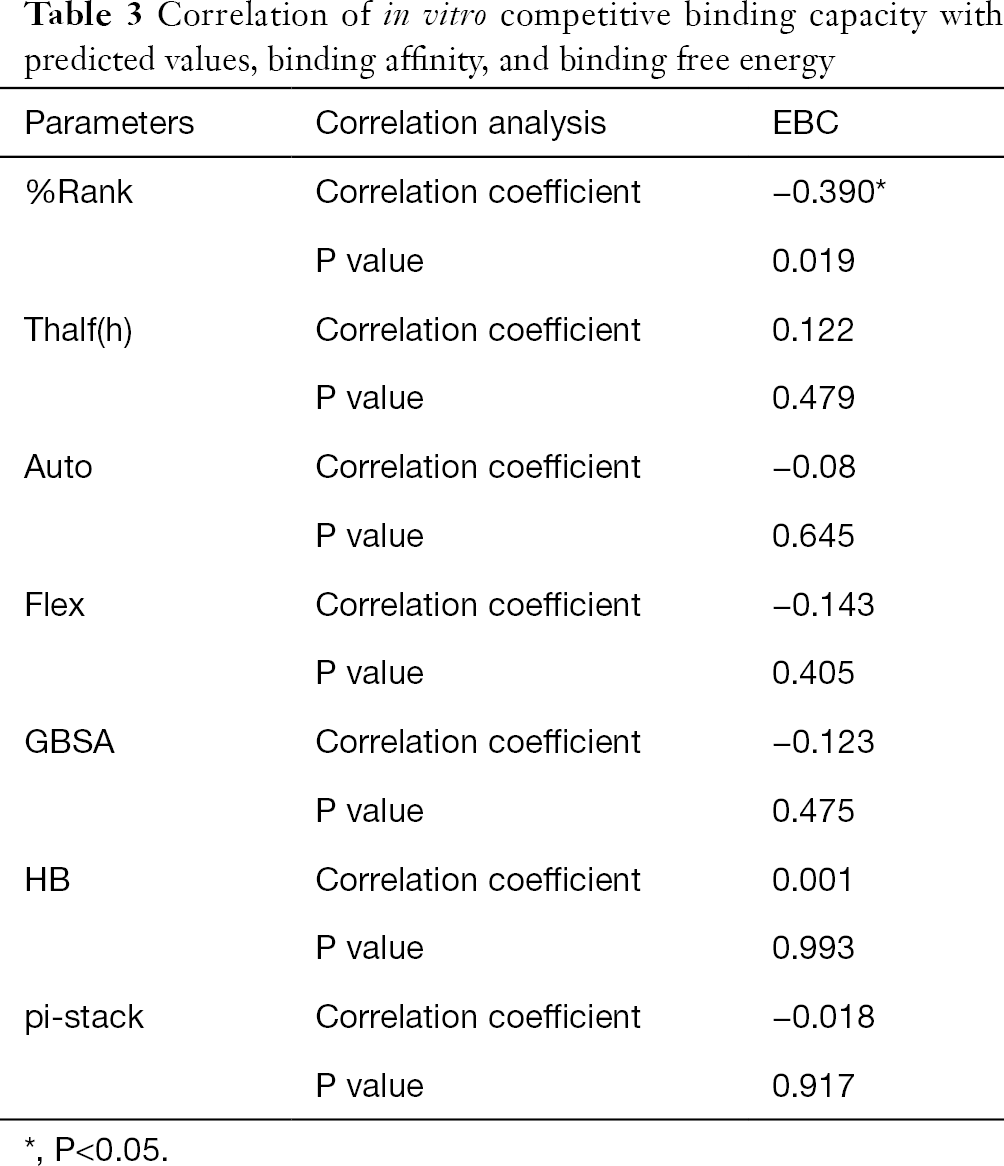 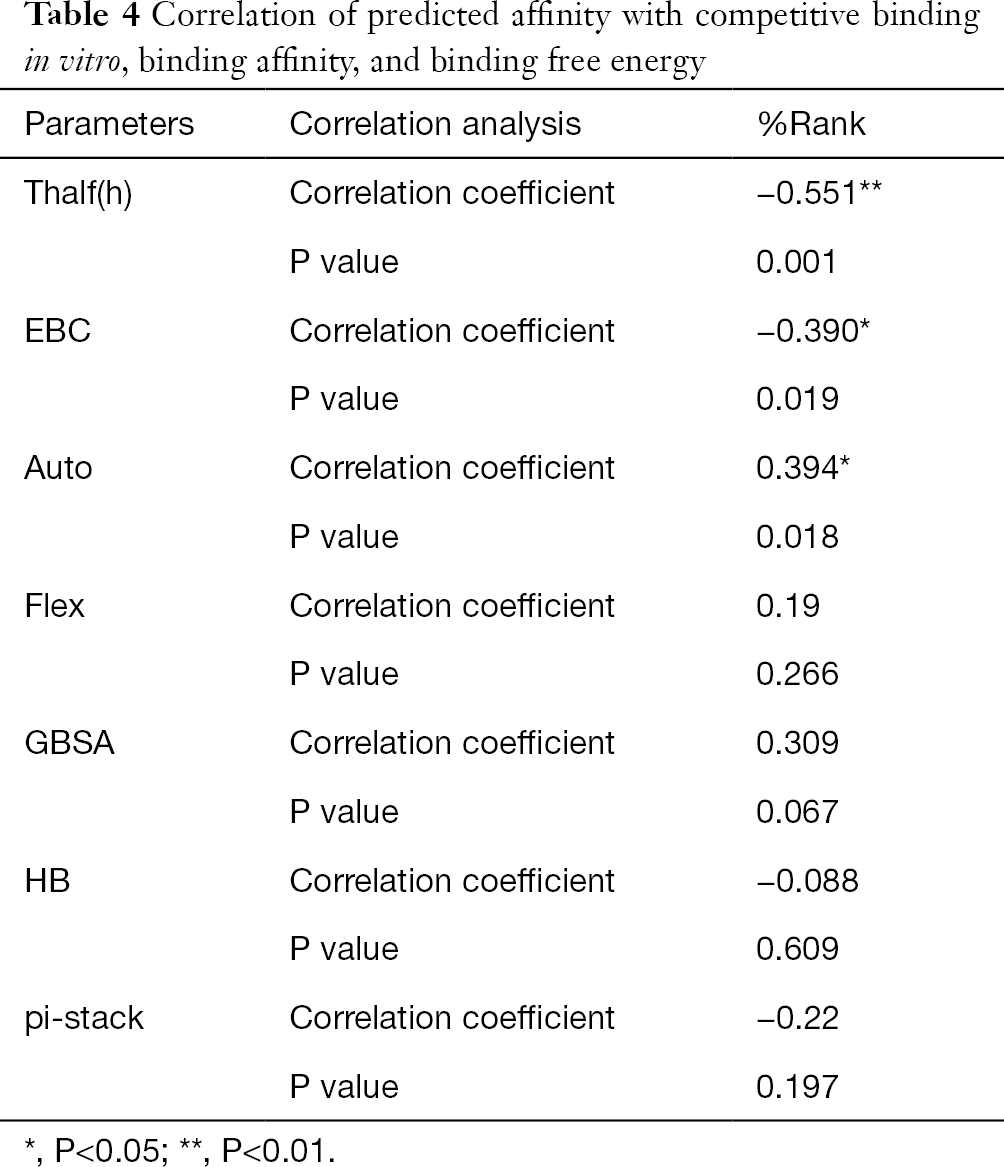 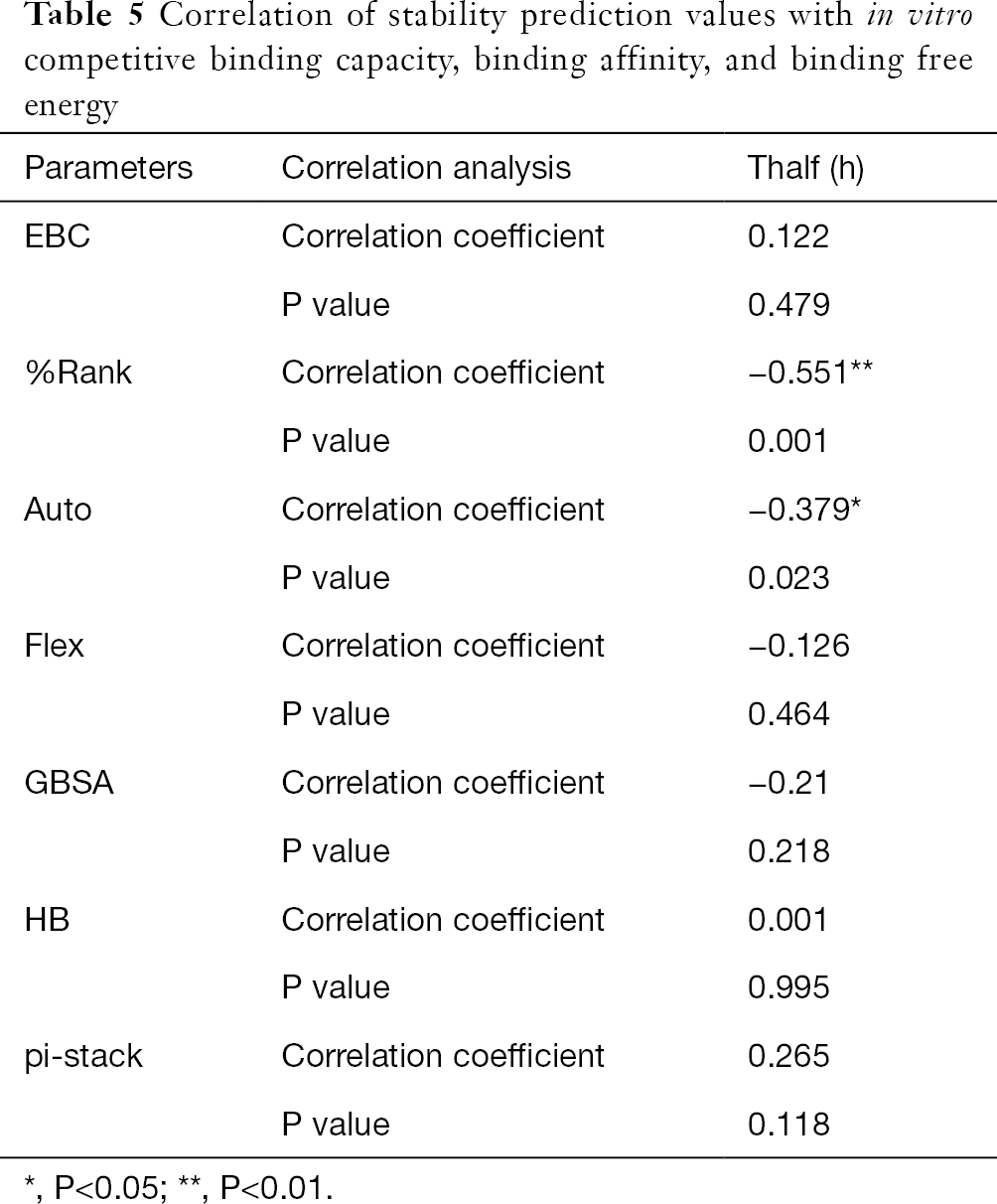 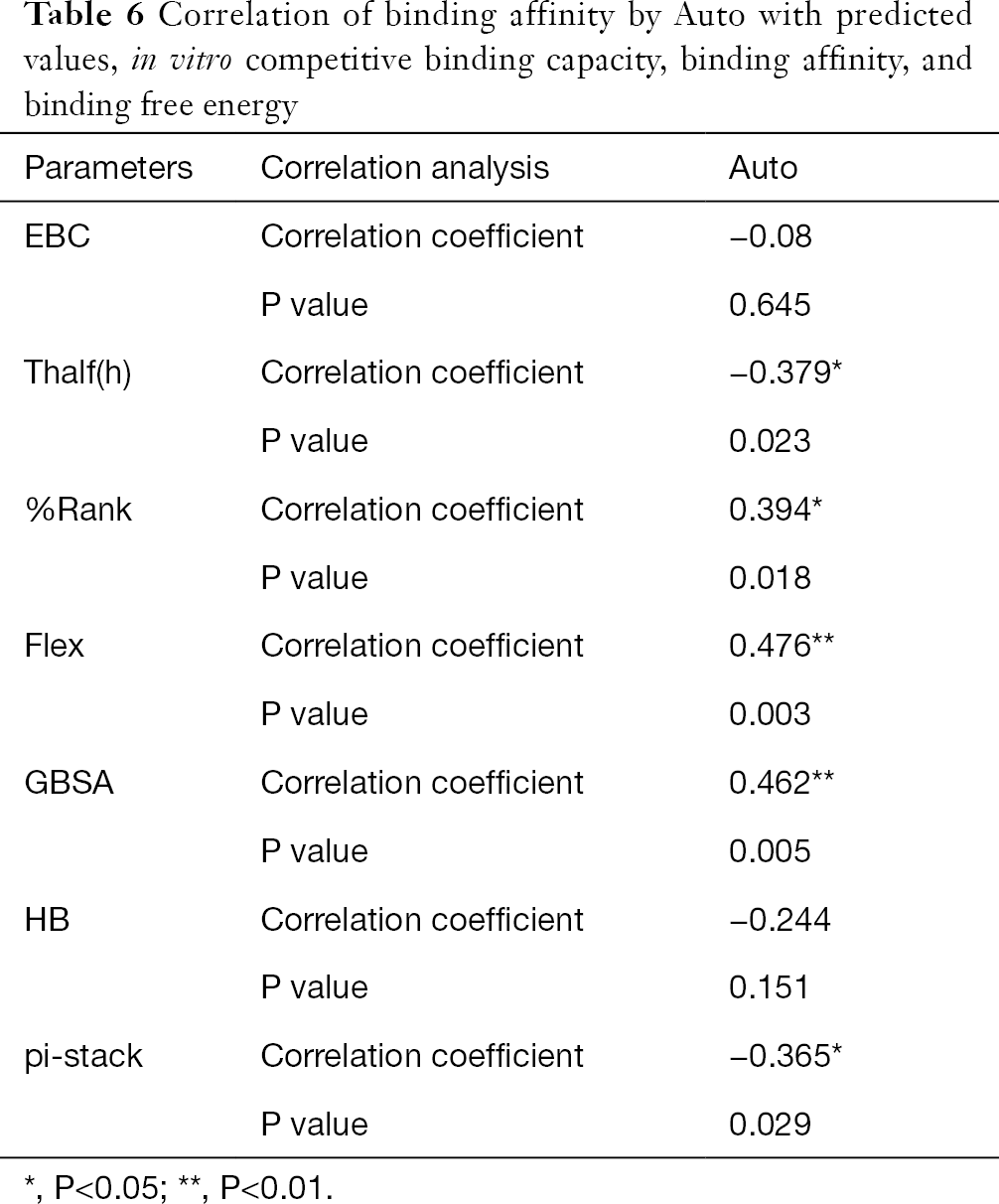 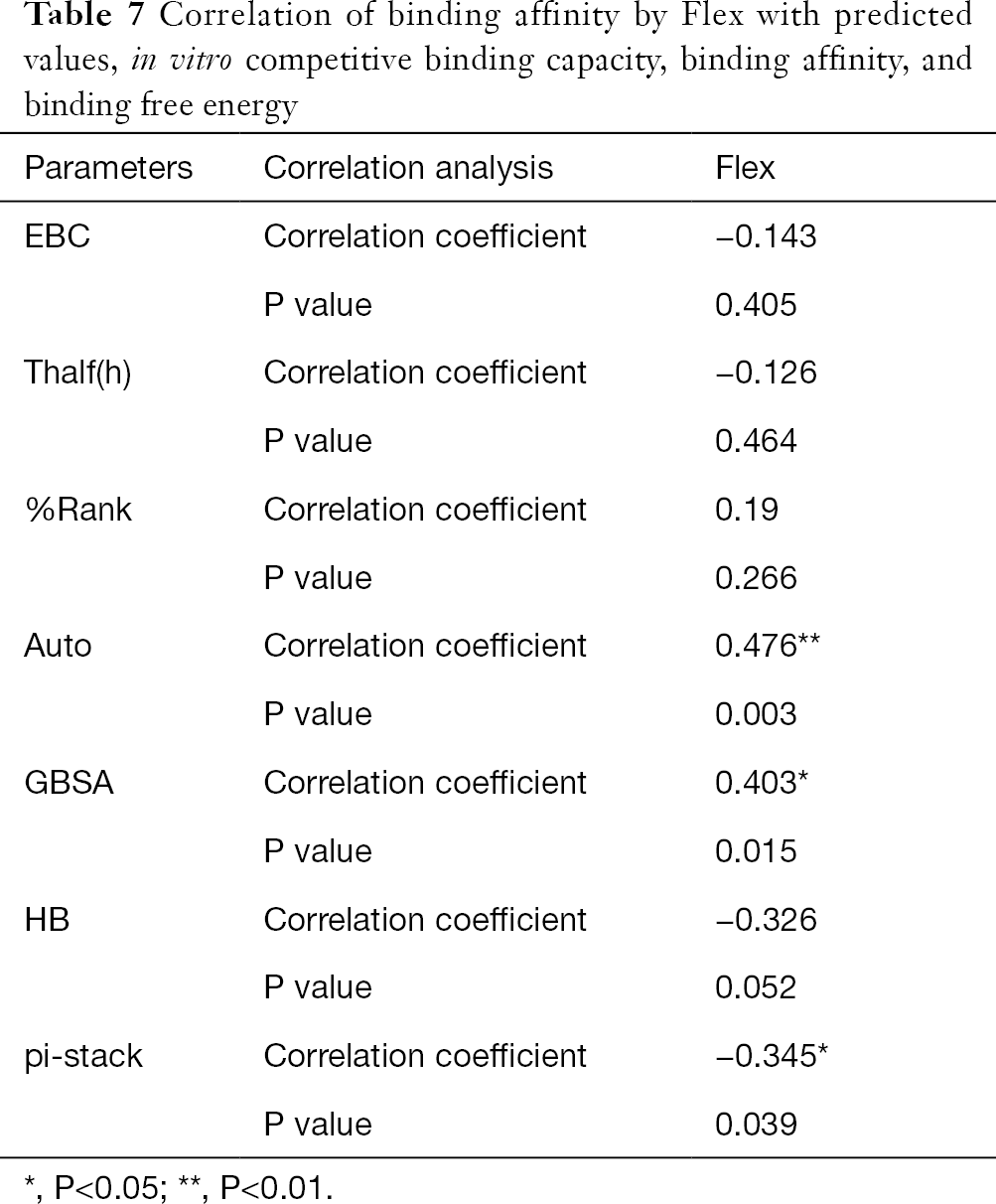 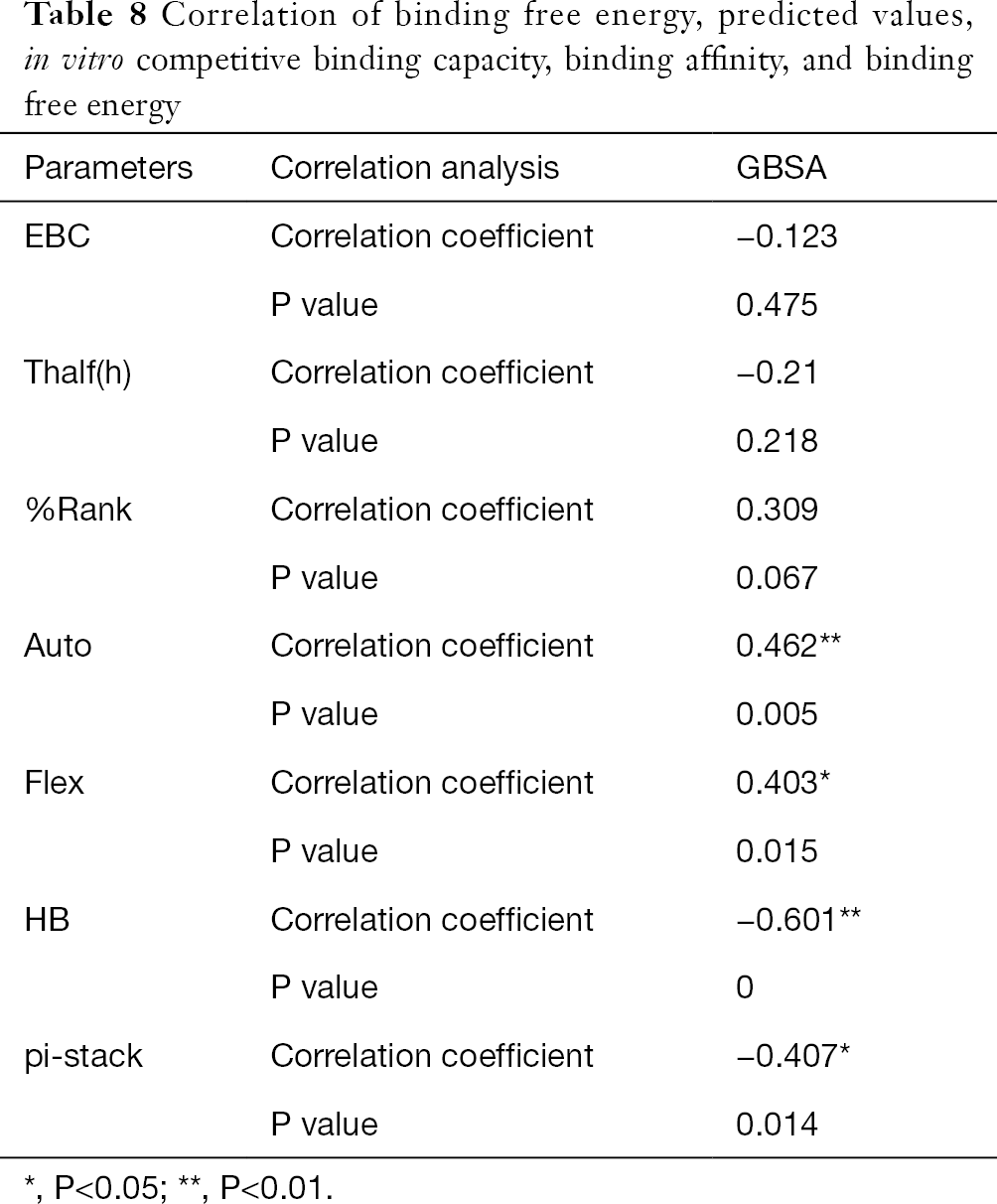 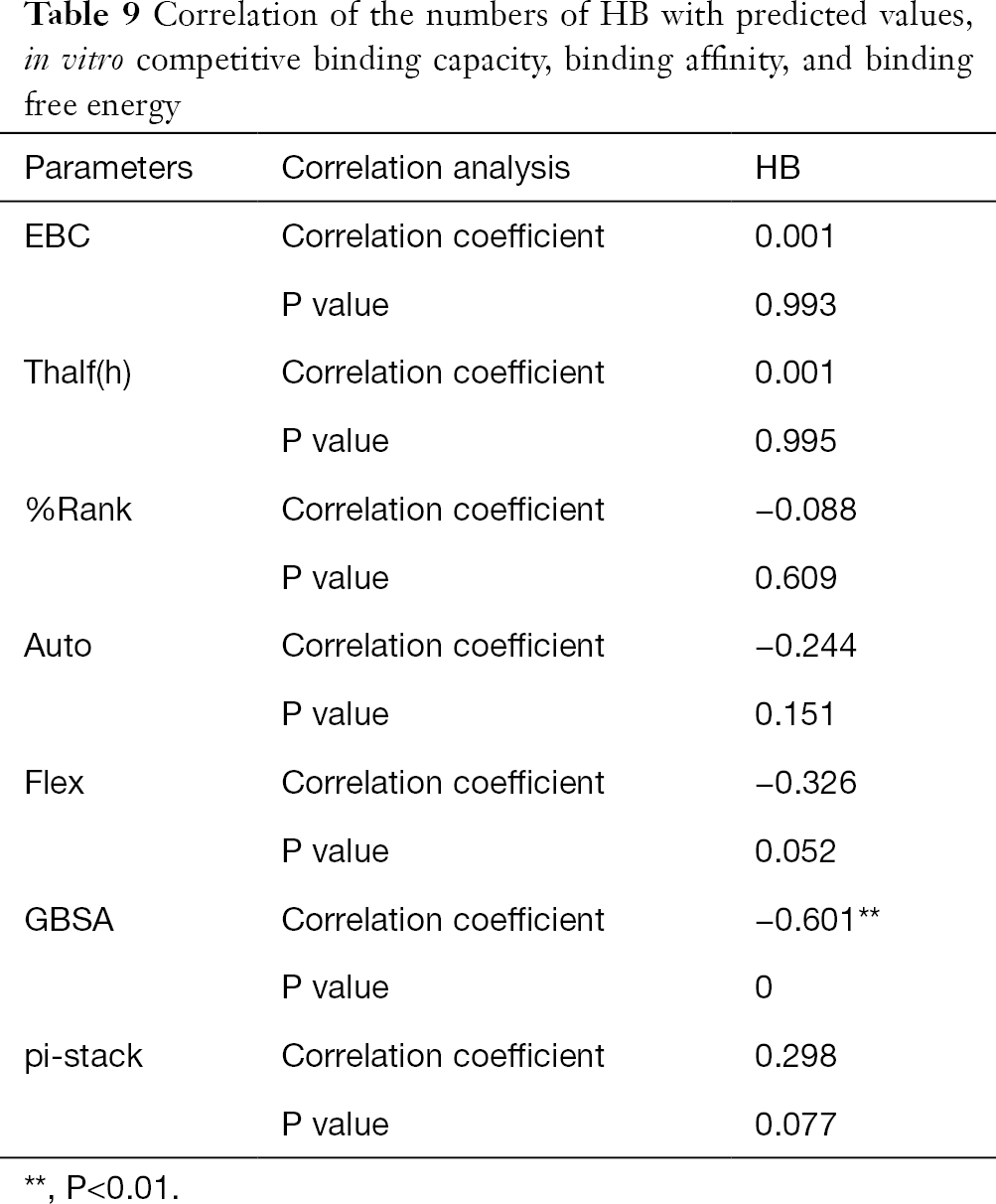 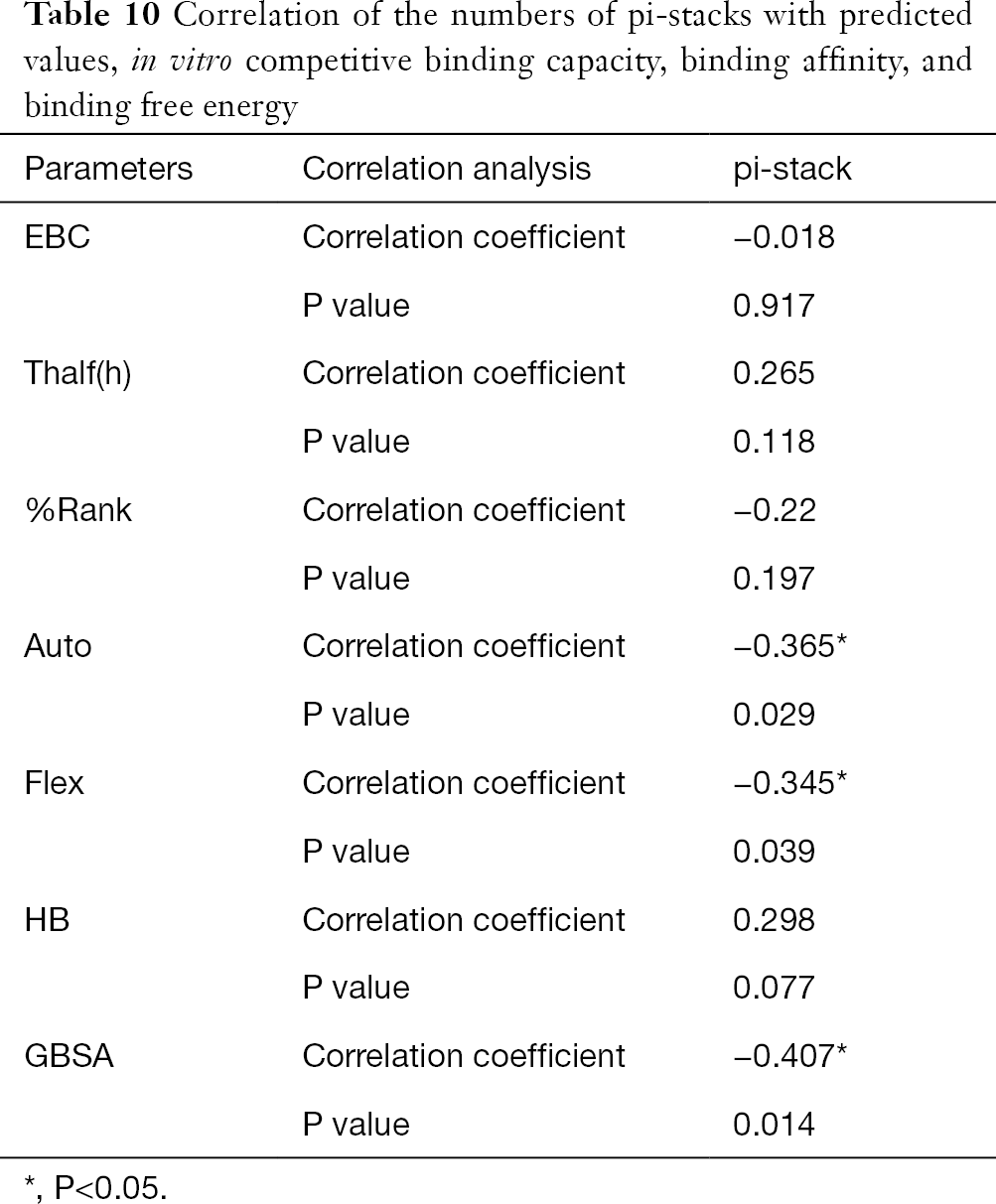 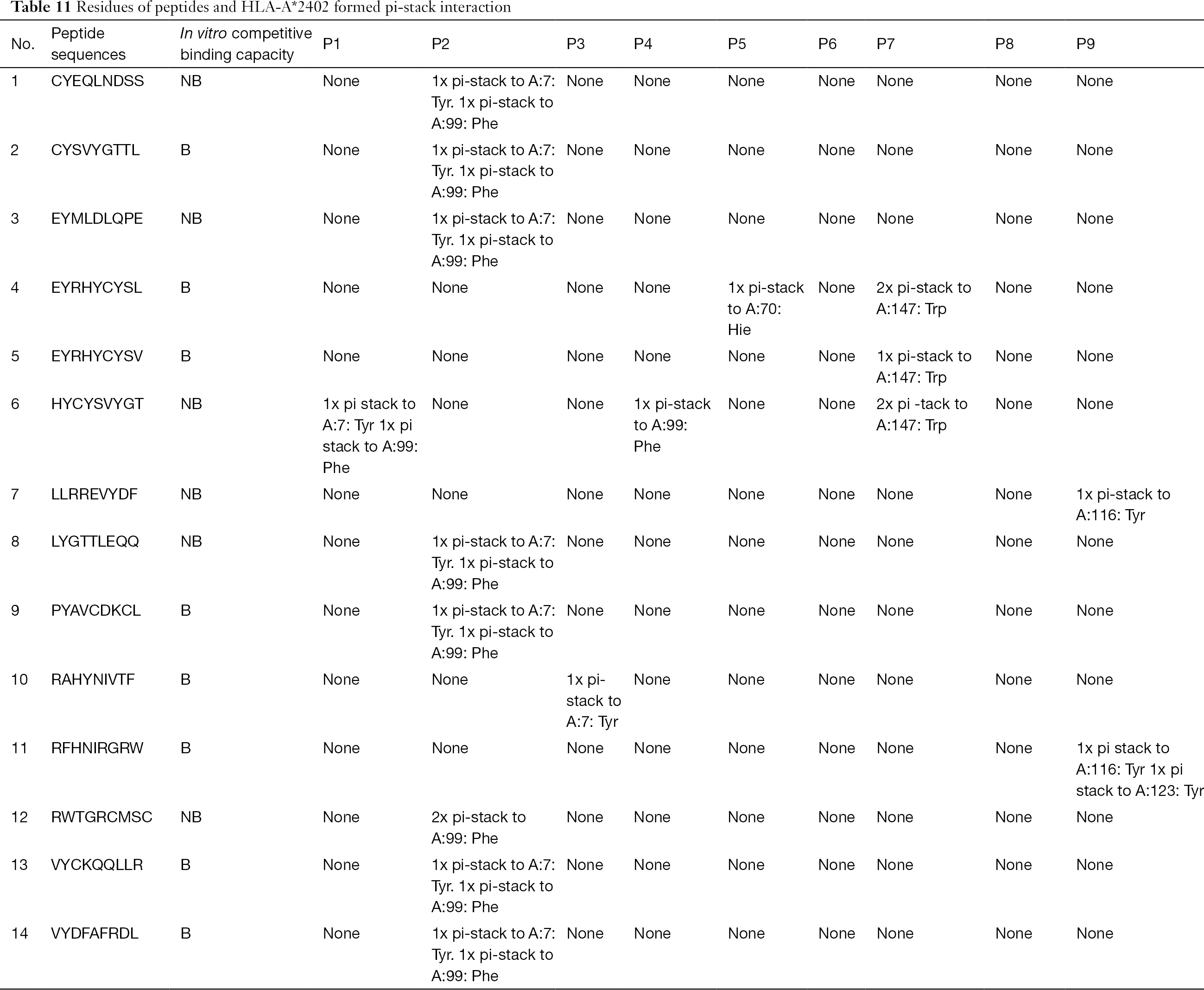 Polypeptides in the MHC peptide binding groove have been shown to mediate the recognition of T cells and other receptors by affecting the binding function of the complex. Peptides could regulate the movement of MHC itself, thereby prompting the recognition of the peptide-MHC complex by other receptors. Structural modeling of the peptide-MHC complex may reveal unknown driving factors for T cell activation, thereby contributing to the development of better and safer immunotherapy (29). In the present study, we found the intermolecular interactions of the polypeptide-HLA-A*2402 complex were maintained mainly by HB, followed by pi-stack. The binding affinity calculated by molecular docking also showed a significant negative correlation with the intermolecular force pi-stack and the pi-stack had a significant negative correlation with the binding affinity and binding free energy. The residues (C, D, Q, H, L, P, T) at position 2 on the polypeptide that did not form the intermolecular pi-stack force with HLA-A*2402 were replaced by Y and W, the residue (I) at position 4 was replaced by Y, the residues (T, C, Q) at position 7 were replaced by Y, the residues (C, D, K, Q, S, Y) at position 9 were replaced by F and W, and the predictive values of affinity and/or stability were improved when compared to the previous replacement.

Current studies have shown that the substitution of proline (Pro) for the third residue on the polypeptide could not only significantly enhance the ability of anti-tumor CTL to recognize wild-type epitopes (30), but also increase the affinity of pMHC and the stability of the complex (31). After analyzing the crystal structure of the MHC-peptide complex, the conformation of the modified antigen polypeptide was found to be like the wild type, and it interacted with the most conserved tyrosine residue Y159 in mammalian MHC-I molecules and maintained a stable bond (32). Changes in the identity of anchor residues may have significant effects, such as changing the conformation of the peptide-MHC complex, thereby affecting contact between the residues on the polypeptides and TCRs. Binding of the TCR-like recombinant antibody to the melanoma differentiation antigen gp100 T cell epitope G9-209 were completely dependent on the identity of the second single peptide anchor residue. In other words, the TCR-like antibody could only be modified with high affinity to HLA-A2 peptide G9-209-2M and then be recognized by specific complexes after contacting. It was suggested that the modification of anchor residues could significantly affect the conformation of the MHC peptide groove, which may have a profound impact on the interaction of TCR-pMHC molecules (33,34). Compared with non-antigenic peptides, antigenic peptides tend to bind to MHC-I molecules more stably, and results confirm that the unsuitable anchor residue at position 2 of the polypeptide is particularly prone to unstable interaction with MHC-I (13). The in vitro competitive binding ability after residue substitution at the above sites still requires further clarification in in vitro tests, and we will perform the Enzyme-Linked Immunosorbent spot (ELISpot) assay (35), immune repertoire (36,37) and peptide-MHC tetramer staining (38) to verify the prediction results, moreover, other factors that affect the affinity and stability of the polypeptides with HLA-A*2402 will require multidisciplinary, multidimensional analysis and discussion.

The generation and increase in the numbers of pi-stack interactions between antigen peptides and HLA-A*2402 may help improve the affinity and stability of the complex. The prediction of peptide-HLA intermolecular force and binding affinity by means of molecular docking is a supplement to the current commonly used prediction databases.

Funding: The study was supported by the Youth Project of National Natural Science Foundation of China (No. 82004129) and the Sci-Tech Key Project of Zhejiang Province of China (No. 2017C03053).

Conflicts of Interest: All authors have completed the ICMJE uniform disclosure form (available at http://dx.doi.org/10.21037/atm-21-630). The authors have no conflicts of interest to declare.