The survey team from DXY.com recently surveyed 1,759 physicians with experiences in the management of diabetes from 31 provinces, municipalities, and autonomous regions, with attempt to learn the status quo of the market of type 2 diabetes mellitus (T2DM) diagnosis and treatment in China.

According to the Report on Chronic Disease Surveillance and Diabetes Survey in China, which was published in JAMA in 2013, there were over 110 million diabetics in China, accounting for about 1/3 of the global diabetes. However, only around 1/4 of Chinese diabetic patients are undergoing medical treatment, less than 40% of whom have had their blood sugar well controlled. China has undoubtedly become one of the countries with the heaviest burden of diabetes, and the prevention and control of the occurrence and progression of diabetes have become tough tasks for the Chinese society.

To further understand the management of diabetes in China, the DXY.com survey team had collected questionnaire forms from 1,759 physicians with experiences in diabetes management from 31 provinces, municipalities, and autonomous regions in China; furthermore, in combination with data from the insight database of DXY.com, the survey team analyzed the demographic features of T2DM patients, diagnostic approaches, medical treatment, advances in R&D of diabetes drugs, doctors’ academic needs, as well as the journals, meetings, and medical institutions recognized by the respondents.

The 1,759 questionnaire forms were collected from physicians working in the department of endocrine, department of general medicine, and department of geriatrics. Physicians with an intermediate or senior professional title accounted for 64.8%. Up to 69.4% of the respondents were from tertiary hospitals and 30.6% from secondary or lower hospitals (Figure 1). 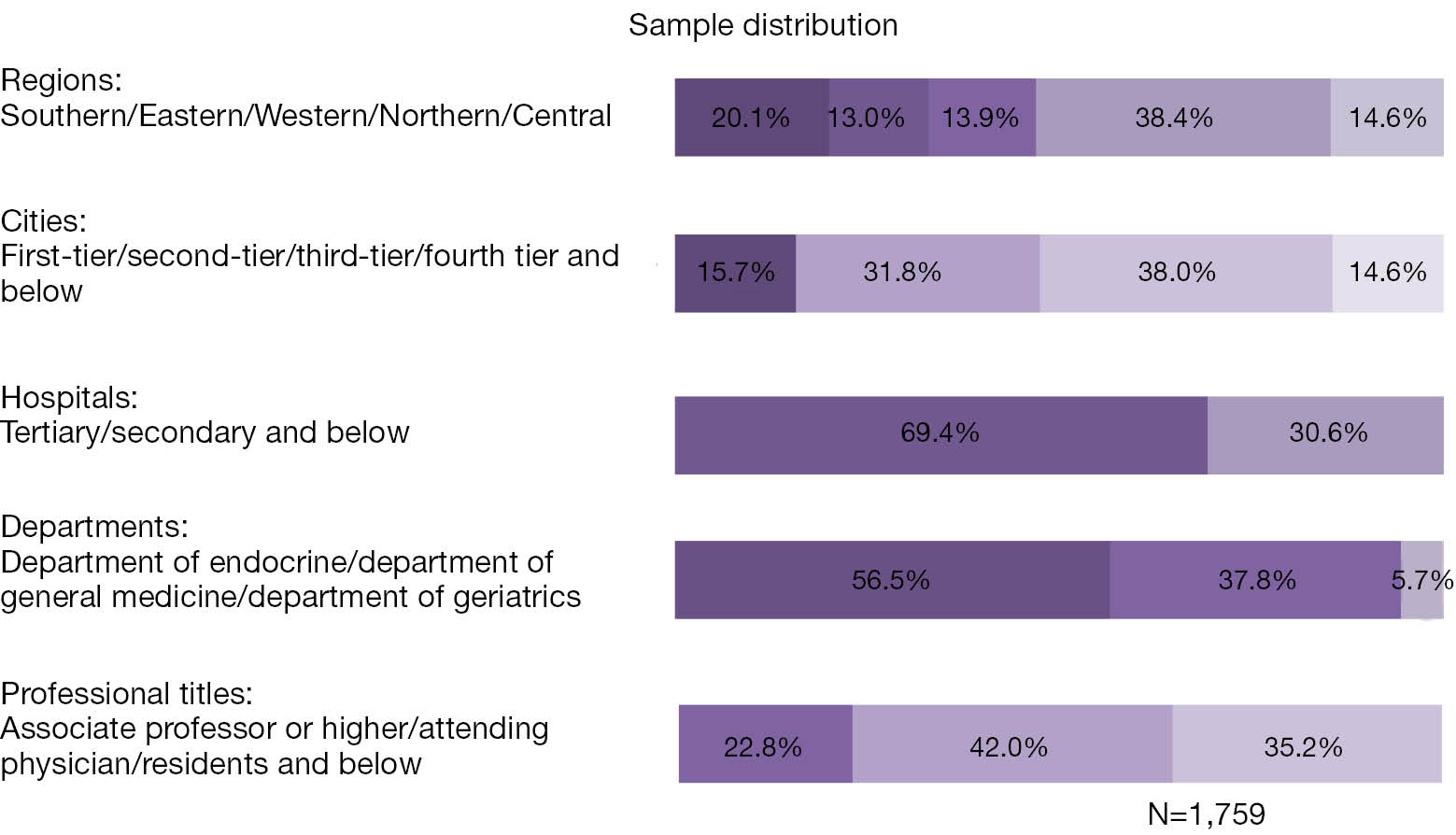 The complete version of the survey report is consisted of the following five aspects (Table 1).

Now let us have a glimpse of parts of the data from the report.

Among the diabetic patient who had visited the hospitals, newly diagnosed patients accounted for 17.1% and patients with a disease course within 10 years accounted for about 50%. For these patients, in addition to controlling the blood sugar, preventing or delaying the T2DM-associated complications will be a major challenge (Figure 2). 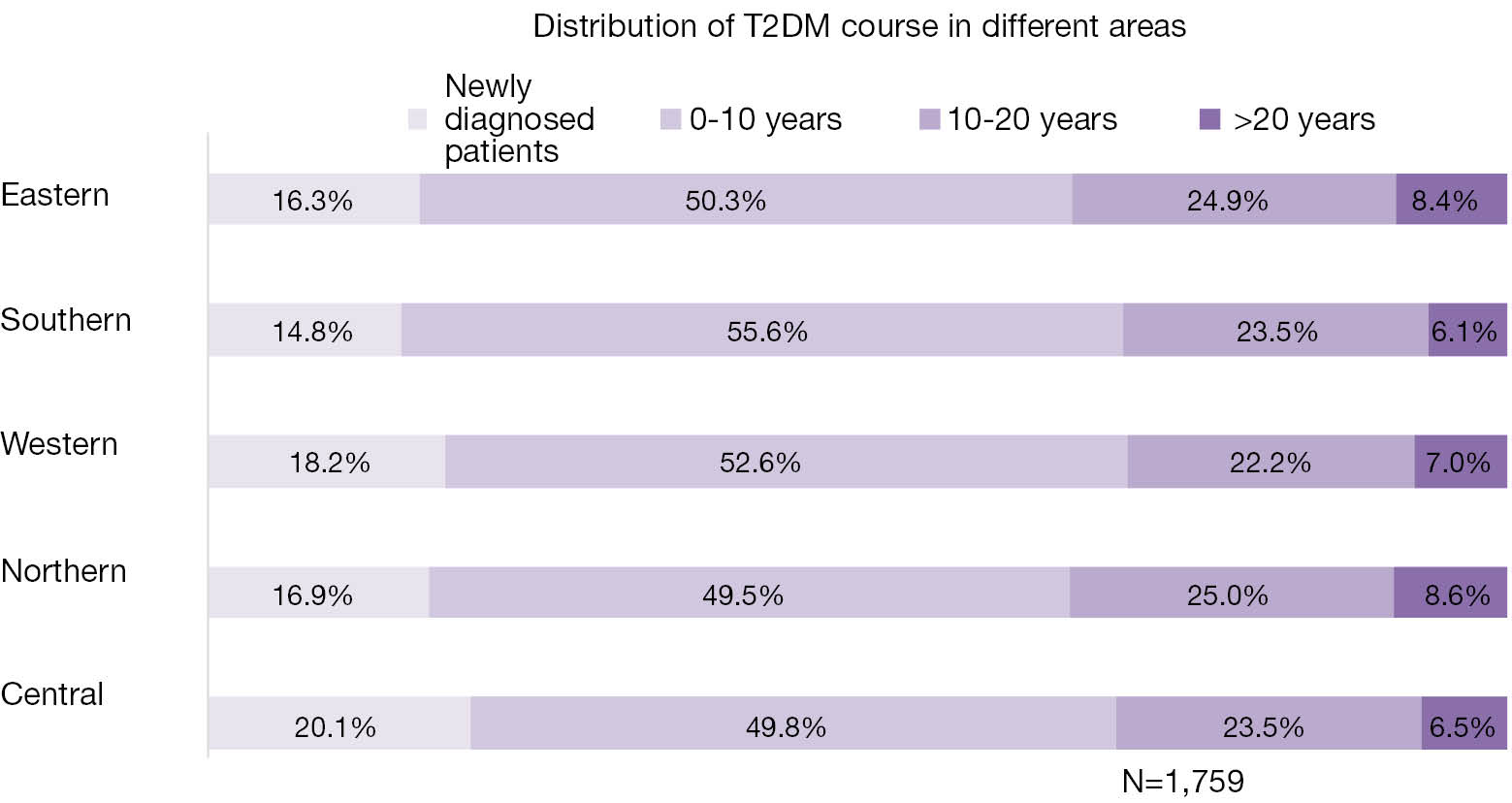 Testing for diabetes and the recommended blood glucose meter 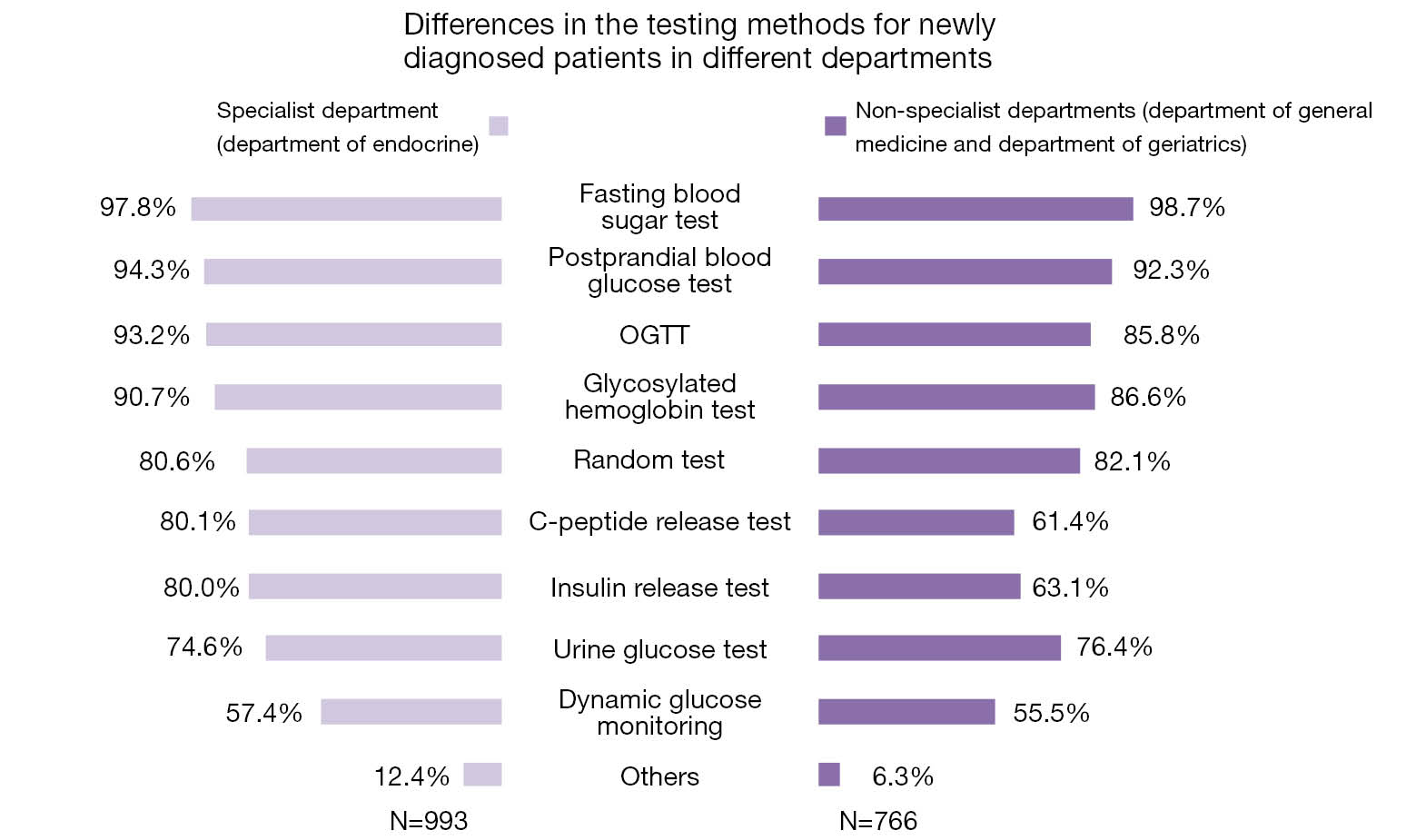 Figure 3 Differences in the testing methods for newly diagnosed patients in different departments.

During the survey, 43.1% of the respondents would recommend a specific brand of blood glucose meter to their patients, with “Roche” being the top-recommended brand. Accuracy was the major consideration when making a recommendation (Figure 4). 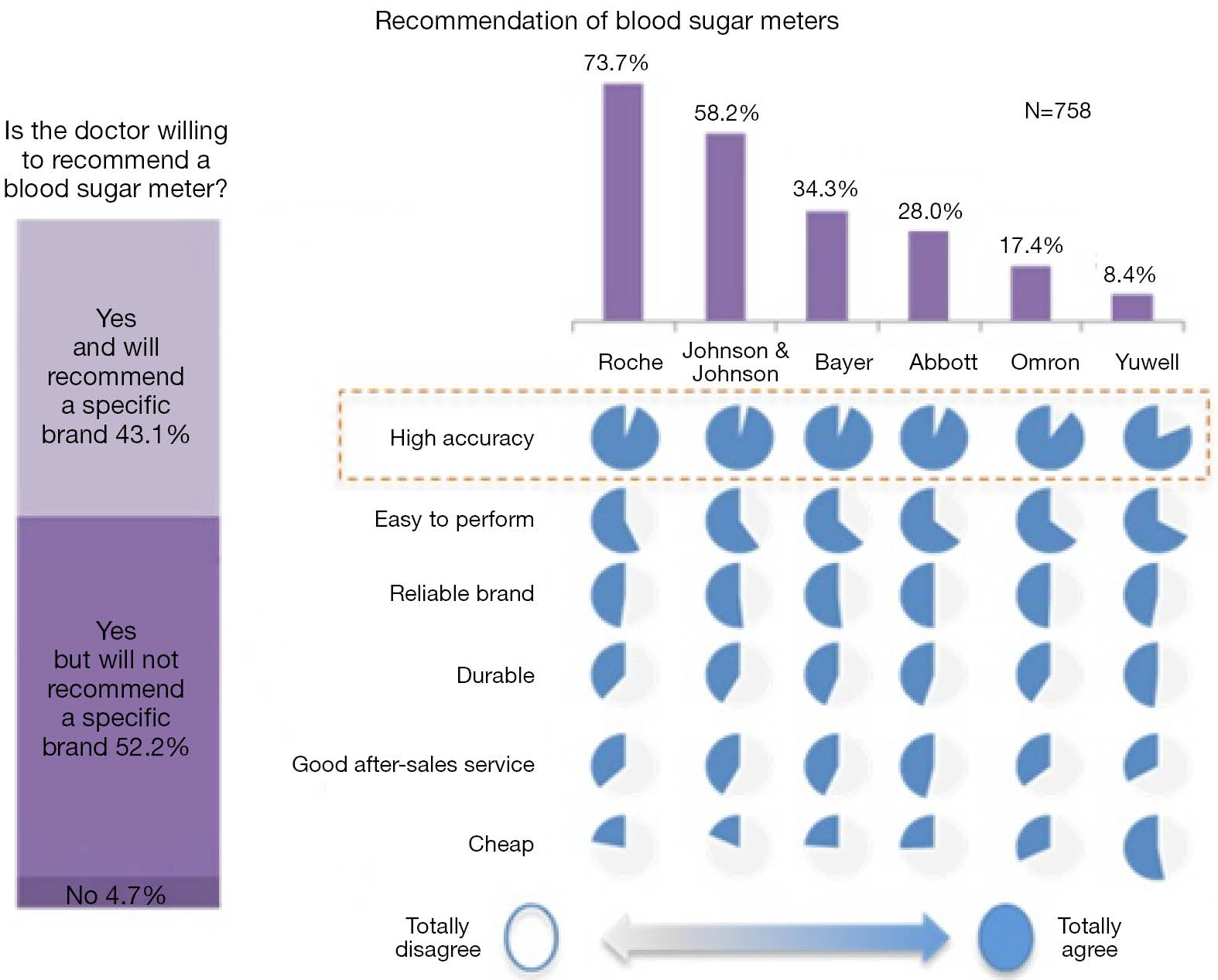 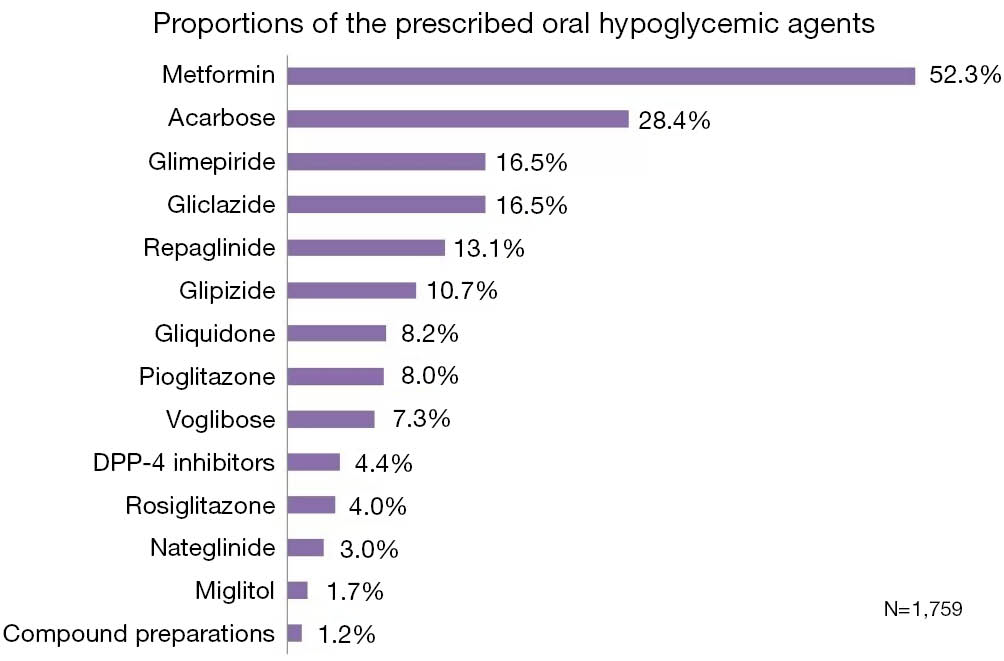 Currently nearly 200 new diabetes drugs are under R&D, among which over two-thirds are generic drugs. The reference-listed drugs are mainly manufactured by multinational pharmaceutical companies. However, up to 29% of RLDs are from domestic companies, reflecting the rapid growth of R&D capabilities of Chinese manufacturers (Figure 7).

The DPP-4 inhibitors and compound preparations are hot topics in the R&D of diabetes drugs, accounting for 50% of the RLDs that had been applied for licensing. In addition, an increasing number of new mechanism-based diabetes drugs (e.g., SGLT2 inhibitors and PPAR agonists) have entered clinical trials or are under application for licensing, which may shift the market profiles in future (Figure 8).

Figure 8 Numbers and categories of the reference-listed drugs for T2DM in China. T2DM, type 2 diabetes mellitus.

In the past year, the average daily learning time was 2 h. Most respondents chose to carry out professional learning during the resting time. The conventional downloading of professional literature and reading of academic books remained the major approaches for physicians to get their professional knowledge updated. Also, they might attend academic meetings and browse professional websites. With the popularity of WeChat, “Access via the WeChat public accounts” had become a key approach for 30.4% of the respondents to obtain the academic knowledge (Figure 9). 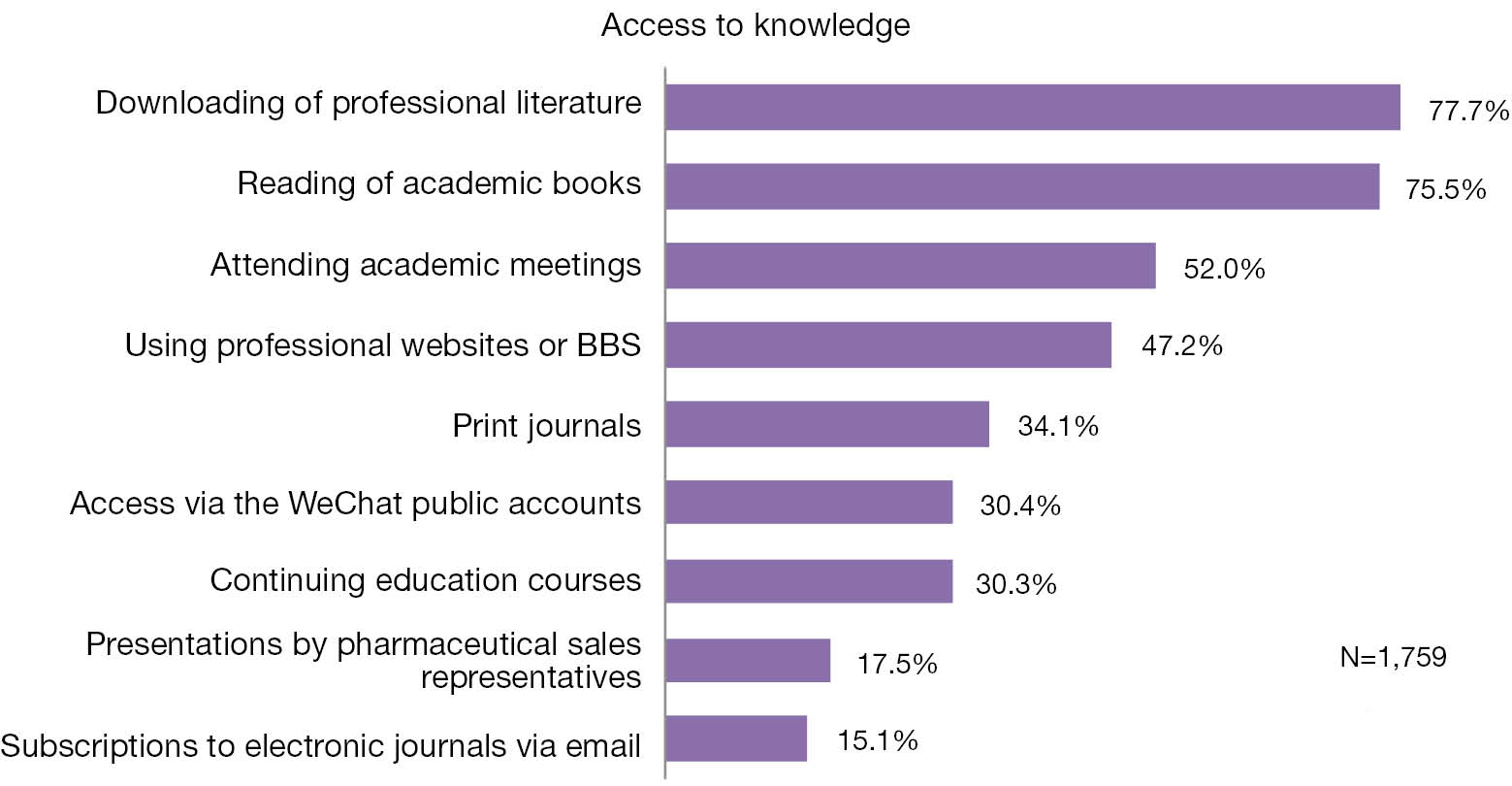 The most-rated international academic meetings were the International Diabetes Federation (IDF) conference, American Diabetes Association (ADA) annual meeting, and European Association for the Study of Diabetes (EASD) annual meeting. For the domestic academic meetings, the most satisfactory meetings included the annual meeting of the Chinese Society of Endocrinology, the annual meeting of the Chinese Society of Diabetes, and the Peking University Diabetes Forum. The top three factors that attract the physicians were high-level lectures, interesting contents, and reasonable timing/venue. Also, such meetings should allow the physicians to communicate with their colleagues and truly answer the problems they meet in clinical practices (Figure 10). 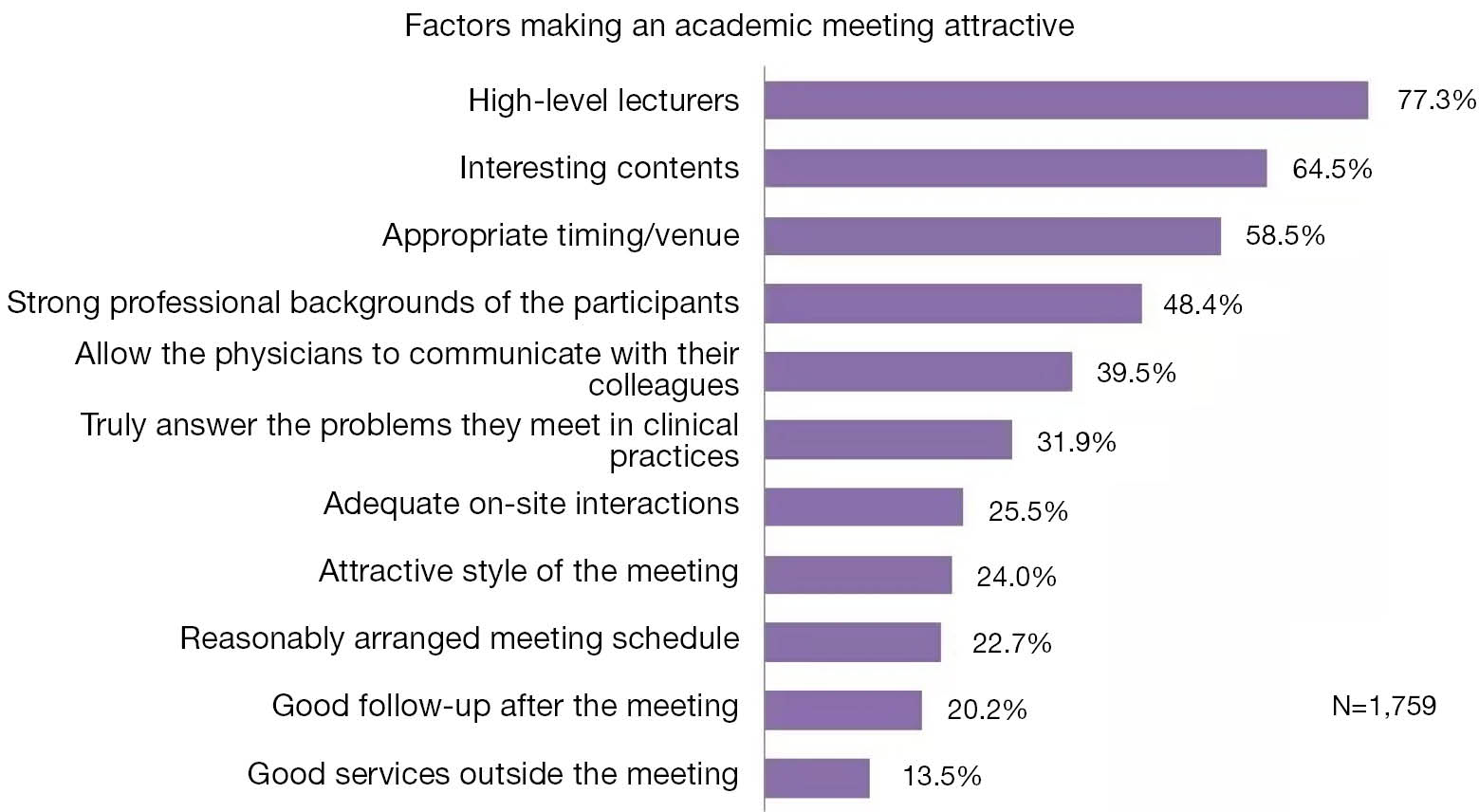 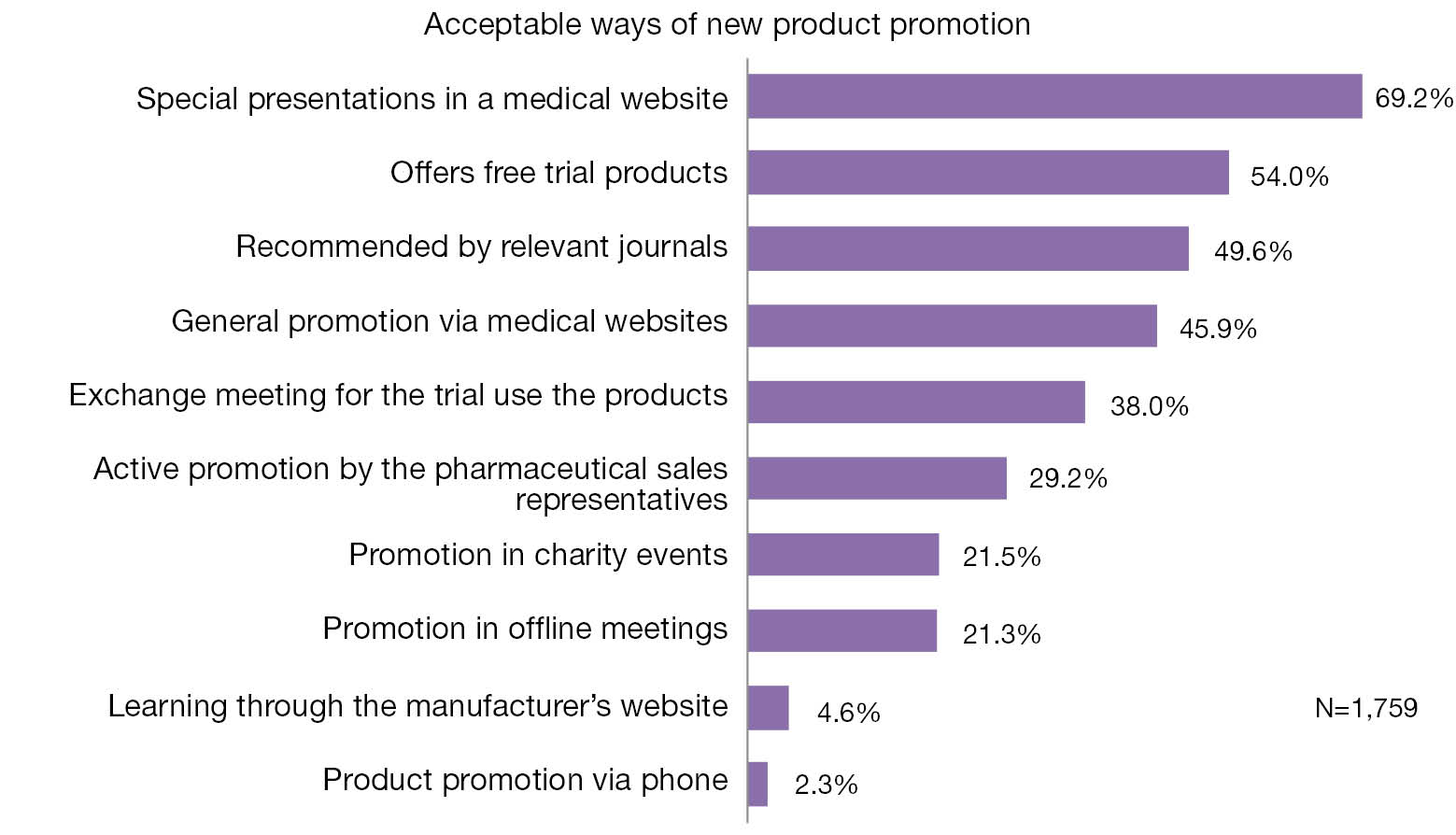 Diabetes was the top one journal in the field of diabetes among the respondents, followed by the Chinese Journal of Endocrinology and Metabolism (Figure 12).

Figure 12 Five journals in the field of diabetes.

This is an excerpt of the 2015 Report on the Market of Type 2 Diabetes Mellitus Diagnosis and Treatment in China. Please feel free to contact us if you are interested in the full text or a customized edition.

This survey report was designed and completed by the DXY.com survey team. The survey team is committed to carrying out survey businesses and services under the leadership of DXY.com, focusing topics including disease diagnosis and treatment, advances in medical research, medical reform policies, and daily activities of doctors, with doctors, pharmacists, and nurses being the main respondents. All the data and evidences collected from these surveys will help and facilitate the companies to improve their products and services, the society to understand the medical staff, the doctors to communicate with their colleagues, and the health authorities to optimize their decision-making.