MicroRNAs are small non-coding (nc) RNAs (20–25 nucleotide long structures) that bind to the 3'-untranslated region of target messenger RNAs and block their translation, leading to gene silencing at the post-transcriptional level (1). MicroRNAs potentially regulate 60% of protein-coding genes in humans (1). Since the report of microRNA-192 as the first specific microRNA in diabetic nephropathy, the role of various microRNAs in its pathogenesis has been studied extensively over the past few decades (2). The functions of individual microRNAs in diabetic nephropathy could provide clues for new therapeutic targets. Further, imbalance of microRNA expression, either upregulation or downregulation, contributes to the progression and prognosis of diabetic nephropathy by modulating genes related to ECM accumulation, hypertrophy, oxidative stress, inflammation, endoplasmic reticulum stress (ERS), and signal transduction in a variety of renal cells (1). Upregulated microRNAs including miR-21, miR-34a-5p, miR-141, and miR-370 have been investigated in diabetic nephropathy (3). Among these, miR-21 is one of the most studied microRNAs. miR-21 induces renal injury and fibrosis by promoting cell cycle impairment and mesangial hypertrophy, and by activating TGF-β1 and Akt signaling via downregulation of SMAD7 and PTEN, respectively (2). In contrast, the expression of some microRNAs including the Let-7 family, miR-25, miR-29 family, miR-93, miR-126, miR-130b, miR-424, and miR-146a is decreased in diabetic nephropathy (3). Low levels of miR-25 in the blood of diabetic patients are associated with enhanced oxidative stress. The miR-29 family is regarded as a mediator of TGF-β1-mediated fibrogenesis. In addition to miR-29, miR-146a is known as an anti-inflammatory microRNA and is decreased in diabetic nephropathy (2). Thus, correcting microRNA imbalance is a potential therapeutic strategy for this disease.

In the progression of diabetic nephropathy, loss of podocytes is considered an early and pivotal mechanism (4). The microRNA-30 family including microRNA-30a through microRNA-30e, is abundantly expressed in podocytes, and plays an important role in controlling podocyte homeostasis (5). Connexins are components of intercellular hemichannels, connexons, which form gap junctions and allow cell-to-cell communication. Connexin43 (Cx43) is considered the most widely expressed and distributed gap junction protein related to gene transcription, cytoskeletal dynamics, ATP exocytosis, vesicle release, and cell stress (6).

Recently, Li et al. (7) reported the role of microRNA-30/Cx43 in podocyte injury in diabetic nephropathy. They found that microRNA-30 members were noticeably downregulated in high glucose-stimulated podocytes and streptozotocin-induced diabetic nephropathy model rats. They further identified Cx43 as the potential target of the microRNA-30 family using TargetScan and proved their functional interaction using a luciferase reporter assay. The authors subsequently applied a microRNA-30 family mimic and inhibitor both in vitro and in vivo and Cx43-siRNA in vitro, demonstrating that overexpression of microRNA-30 members and inhibition of Cx43 prevent podocyte injury. To further investigate the mechanisms of the microRNA-30/Cx43 axis in podocyte apoptosis, the authors focused on ERS showing concurrent changes and co-localization of caspase 12 and Cx43. Finally, they found that overexpression of microRNA-30 family members attenuated ERS by modulating Cx43 expression.

The expression of Cx43 in diabetic kidneys appears to be diverse depending on the species and types of renal cells. Renal expression of Cx43 was found to be downregulated in a diabetic rat model (10) as well as in diabetic patients without specifying the cell types affected (11). However, another study using SD rats reported that podocyte injury was related to increased expression of Cx43 through impaired autophagic flux (12). In rodents, Cx43 localization is sparsely observed along the glomerular capillary wall in normal glomeruli, but becomes apparent only after podocyte injury (13). In humans, Cx43 is most abundantly expressed in podocytes with a linear pattern, but diabetic nephropathy downregulates and redistributes the Cx43 expression (14). Thus, whether the effect of the microRNA-30/Cx43 axis is conserved in the human kidney, remains to be determined.

The authors also studied ERS-induced podocyte apoptosis in diabetic nephropathy. In this study, the authors found increased expression of caspase-12, a key molecule implicated in ERS-induced apoptosis; however, caspase-12 alone might be insufficient to explain ERS. Nevertheless, the authors showed that treatment with microRNA-30 members mimics and Cx43 siRNA effectively restored podocyte apoptosis and the expression of caspase-12, supporting the relationship between microRNA-30/Cx43 and ERS (Figure 1). 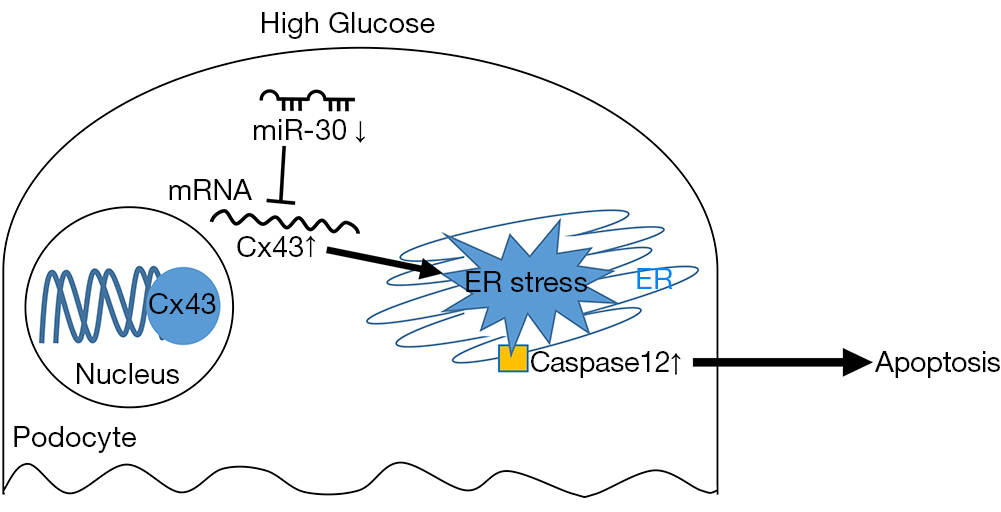 Although the authors elicited the bottom line, they were inclined to simplify the complicated mechanisms of podocyte apoptosis and ERS in terms of methodology. Further studies considering diverse indicators and aspects are thus needed to better understand the microRNA-30/Cx43/ER axis in diabetic nephropathy. Nevertheless, the authors revealed novel functional connections among microRNA-30 members, Cx43, and ERS leading to podocyte injury in diabetic nephropathy. In future clinical applications of this axis as a therapeutic target, testing a single microRNA as a biomarker or therapeutic target should be done cautiously, considering the interactions of various microRNAs.

In summary, the study by Li et al. highlighted the effect of the microRNA-30/Cx43 axis on podocyte injury in diabetic nephropathy. The authors provide insights into podocyte apoptosis in terms of microRNA-30 members and their targets. Despite the need for extensive research on the interactions between various microRNAs and pathological signaling pathways, the microRNA-30/Cx43/ERS axis may be a potential therapeutic target in diabetic nephropathy.

Funding: This work was supported by the Soonchunhyang Research Fund.

Provenance and Peer Review: This article was commissioned by the editorial office, Annals of Translational Medicine. The article did not undergo external peer review.

Conflicts of Interest: Both authors have completed the ICMJE uniform disclosure form (available at http://dx.doi.org/10.21037/atm-21-1036). Dr. SHK reports grants from Soonchunhyang Research Fund during the conduct of the study, and Korean National Research Fund (NRF-2020R1I1A3A04037367) outside the submitted work. The other author has no conflicts of interest to declare.