Asthma is a heterogeneous disease with various phenotypes, and is mainly characterized by airway inflammation and airway hyperresponsiveness (1). Increasing evidence indicates that airway neutrophil infiltration in asthma is associated with disease severity and acute asthma exacerbation (2). Therefore, having safe and effective treatments for neutrophilic asthma is crucial.

MRP8 and MRP14, members of the S100 protein family, exist as the protein heterodimer calprotectin (also called S100A8/A9). Calprotectin is predominantly expressed by activated neutrophils, and comprises >30% of neutrophil cytoplasmic proteins (3). Recently, it was identified as an important damage-associated molecular pattern (DAMP) via the receptor of advanced glycation end products (RAGE) and Toll-like receptor 4 (TLR4) (4,5). Emerging evidence suggests that calprotectin is a useful biomarker of inflammatory processes, including rheumatoid arthritis, juvenile idiopathic arthritis, and inflammatory bowel disease (6). The recent study has shown that calprotectin levels in patients with asthma correlated negatively with forced expiratory volume in one second/forced vital capacity, body mass index, and positively with smoke amount and blood neutrophil percentage (7). In addition, calprotectin has a pivotal role in inflammation by inducing the secretion of inflammatory cytokines (8,9). Owing to its critical involvement in inflammatory reactions, calprotectin has received significant attention in studies of asthma (10,11).

RAGE, a multi-ligand receptor belonging to the immunoglobulin receptor superfamily, is an important transmembrane protein (12). There is a growing body of evidence implicating RAGE, via the binding of its ligands, including calprotectin, as a major driving mechanism in the pathogenesis of inflammatory states (13-15). Furthermore, one study showed that RAGE and its ligands may be potential hallmarks for inflammatory disorder progression and severity (16). Nevertheless, little has been revealed about RAGE’s role in asthma to date.

It has been shown that macrolides appear to be beneficial in the prevention of myocardial remodeling via matrix metalloproteinase (MMP) and nitric oxide (NO) regulation, which indicates that macrolides may be alternative therapies for suppressing inflammatory remodeling (17,18). Roxithromycin (RXM), a broad-spectrum macrolide antibiotic, enhances phagocytosis and the bactericidal activities of neutrophils (19). Studies demonstrated that RXM ameliorates colitis by suppressing oxidative stress and downregulating NF-κB-mediated proinflammatory signaling (20,21). Furthermore, it has become increasingly evident that RXM has efficacy in reducing the risk of asthma exacerbations (22,23); however, the mechanisms underlying this effect are not yet fully understood.

In this study, we established a neutrophilic asthma model to investigate the effects of RXM and its underlying mechanisms. To this end, we hypothesized that RXM may alleviate airway inflammation via inhibition of RAGE, which modulates the expression of calprotectin.

We present the following article in accordance with the ARRIVE reporting checklist (available at http://dx.doi.org/10.21037/atm-21-859).

Our neutrophilic asthma model was established according to the improved method of Dejager et al. (24). Briefly, the rats were sensitized with an intraperitoneal (i.p.) injection of 0.5 mg ovalbumin (OVA, Sigma-Aldrich, USA) emulsified in 0.5 mL Freund’s complete adjuvant (FCA, Sigma-Aldrich, USA) in 0.5 mL normal saline (NS) on days 1 and 8. From days 15–19, the sensitized rats were challenged with 1% OVA aerosol for 30 min once daily. Rats in the asthma + RXM group had intragastric (i.g.) administration of RXM (MedChemExpress, USA; 30 mg/kg), and rats in the asthma + FPS-ZM1 group had i.g. administration of FPS-ZM1 (SelleckChem, USA; 1.5 mg/kg) 30 min before the challenge. Rats in the control group were sham-sensitized and challenged with NS (Figure 1A). 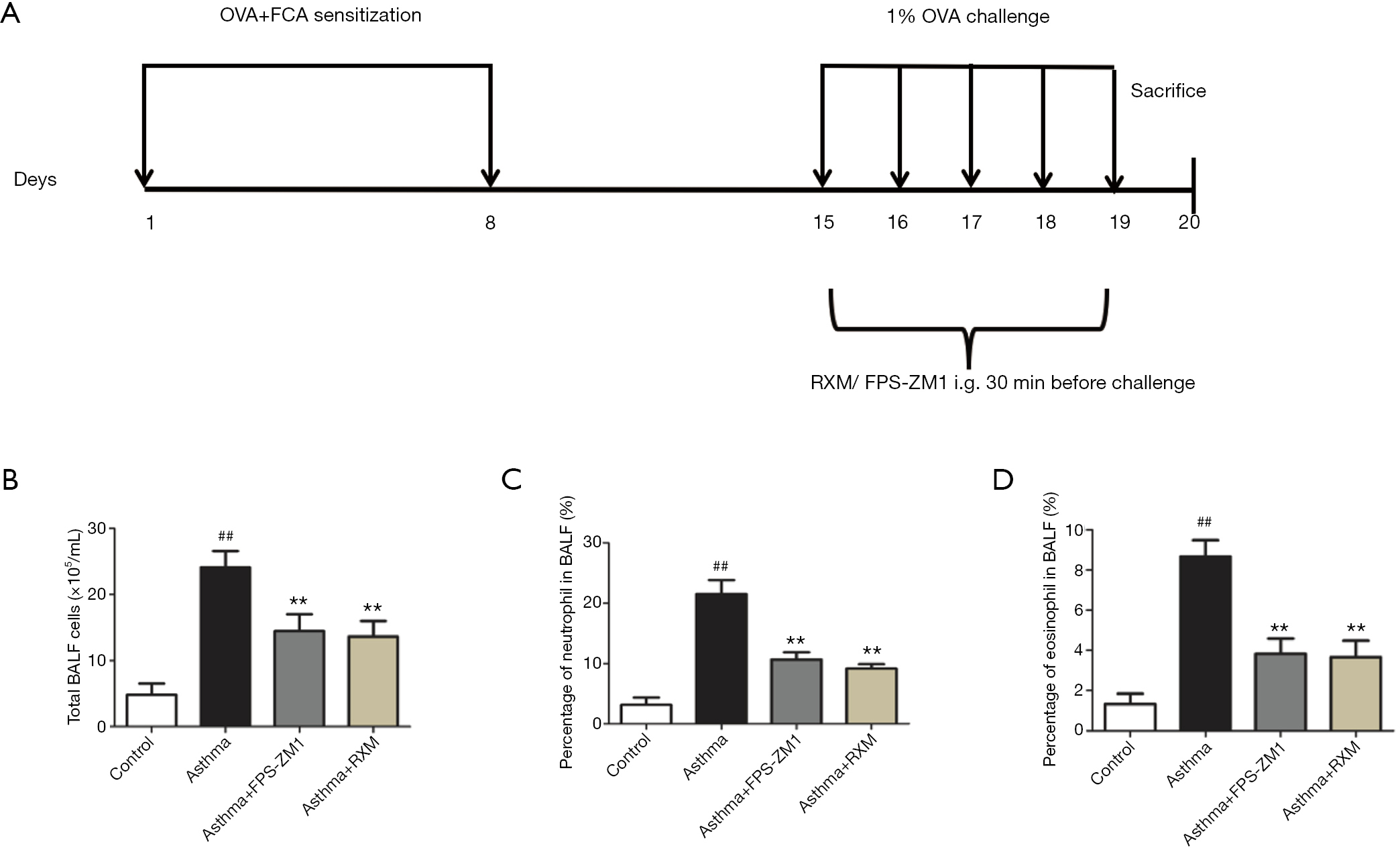 The rats were anesthetized and humanely killed 24 h after the last challenge. Blood samples were collected from the abdominal aorta and the supernatants were centrifuged at 1,006 g for 15 min and stored at –80 °C. The rats’ left lungs were washed with saline solution via a tracheal cannula, and the fluid collected was centrifuged at 112 g for 15 min at 4 °C. The supernatants were kept as BALF and stored at –80 °C. The cell pellet was resuspended in saline solution using a hemocytometer (Bio-Rad, USA) to count the total number of cells. Wright’s staining was performed to obtain differential cell counts.

The rats’ right lungs were fixed in 4% paraformaldehyde and stained with hematoxylin and eosin (H&E) for light microscopy (Leica, Germany). The inflammation score was evaluated by a sample-blinded pathologist using the H&E-stained sections (25).

Effect of RXM on airway inflammatory cells in BALF

Effect of RXM on infiltration of airway inflammatory cells 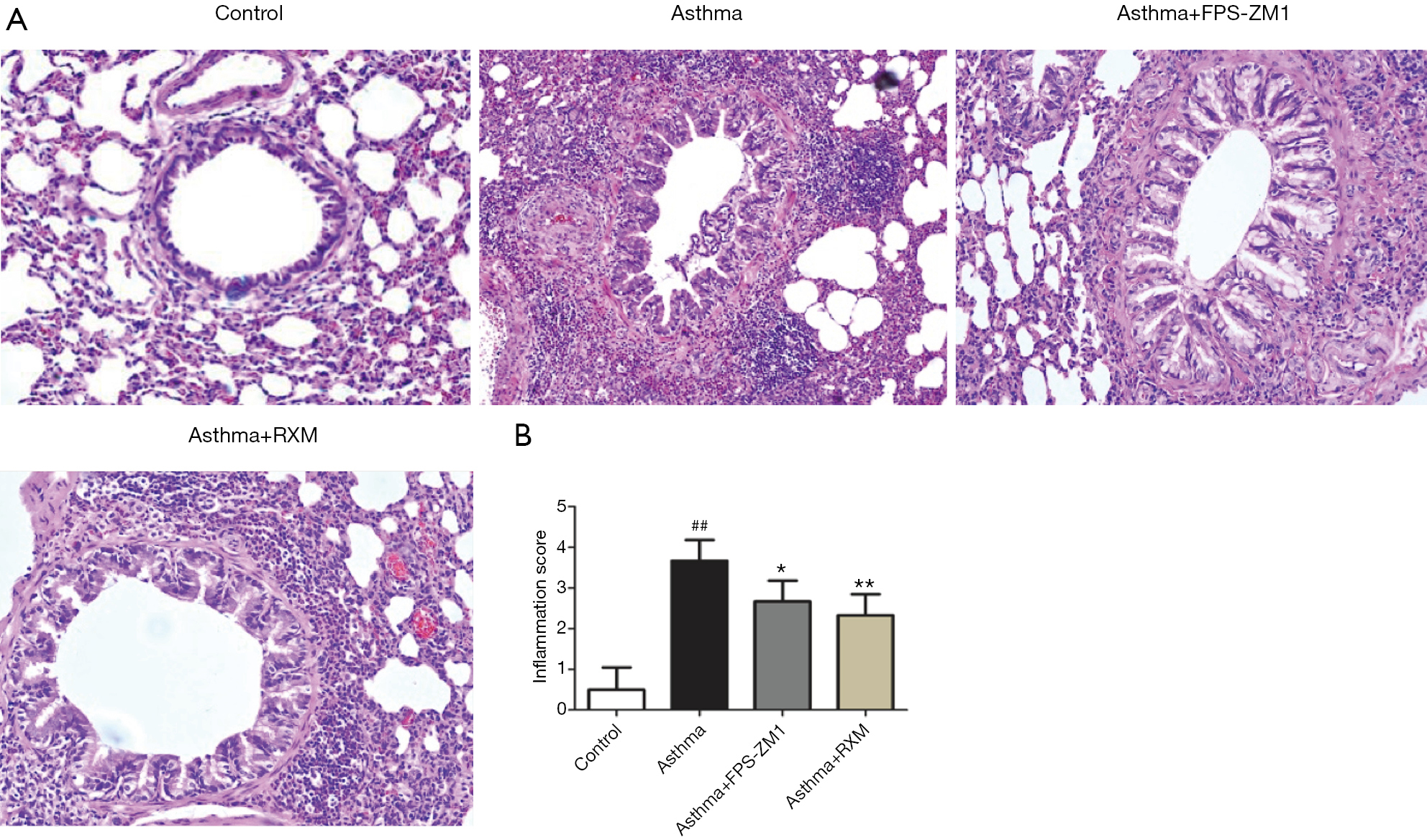 Effect of RXM on inflammatory cytokines in BALF and serum 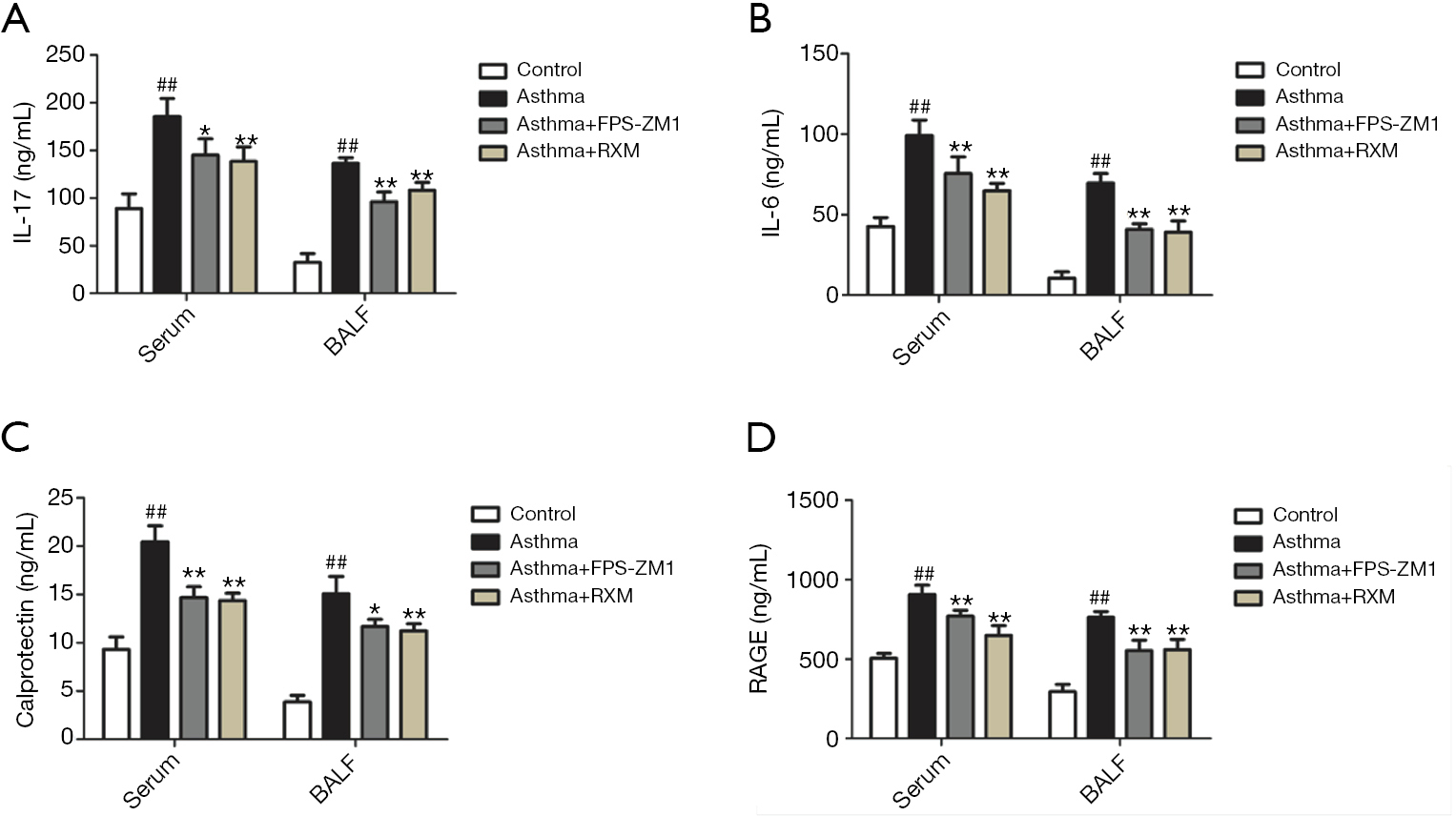 Figure 3 Effects of roxithromycin (RXM) on inflammatory cytokines, calprotectin and the receptor of advanced glycation end products (RAGE) in serum and bronchoalveolar lavage fluid (BALF). The concentrations of interleukin (IL)-17 (A), IL-6 (B), calprotectin (C), and RAGE (D) in serum and BALF by Enzyme-linked immunosorbent assay (ELISA). Results were obtained from three independent experiments. The data are expressed as mean ± standard deviation (SD) (n=4–6 per group). ##, P<0.01 compared to the control group; *, P<0.05 compared to the asthma group; **, P<0.01 compared to the asthma group. 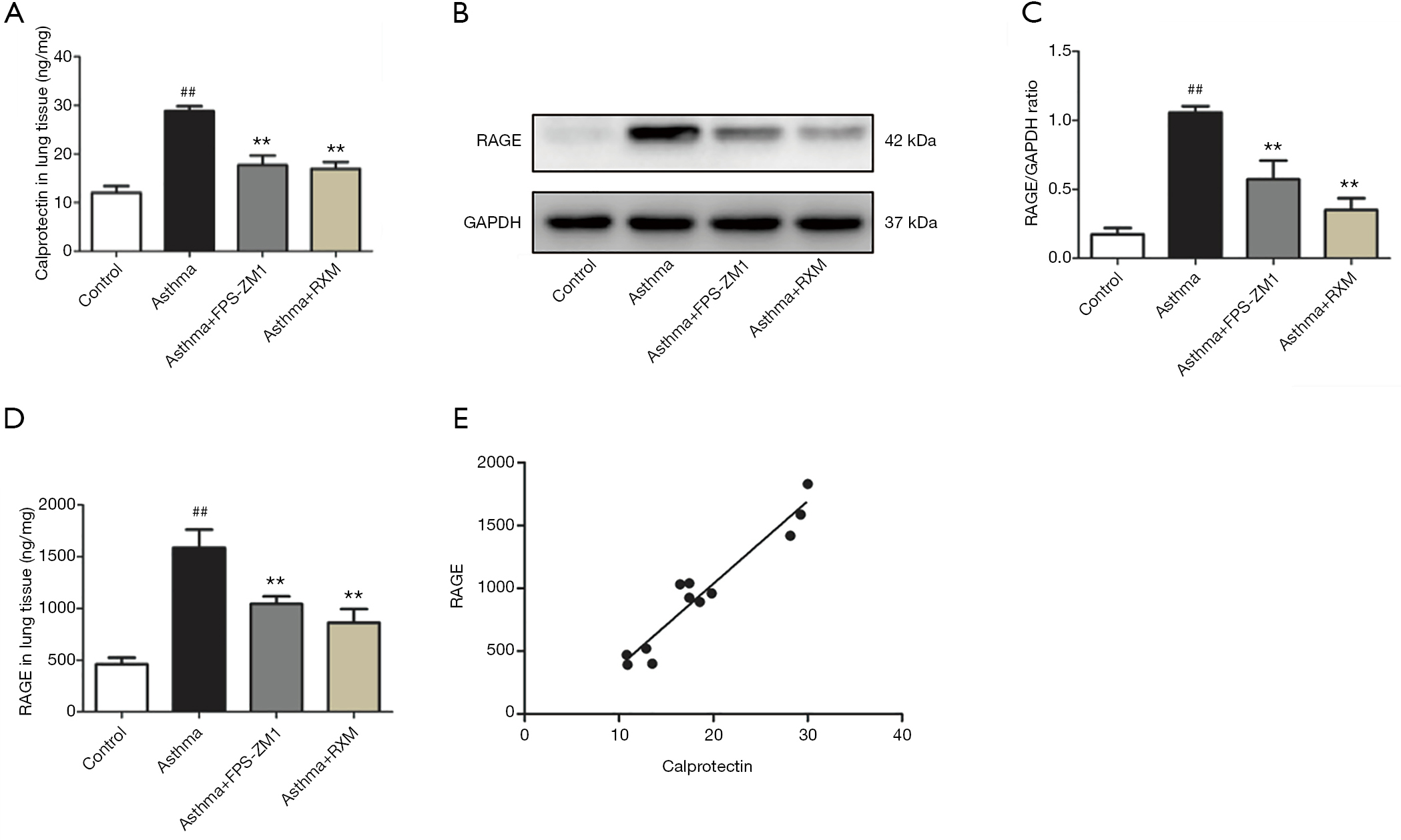 Figure 4 Effects of roxithromycin (RXM) on calprotectin and the receptor of advanced glycation end products (RAGE) in lung tissue. The concentration of lung tissue calprotectin (A) by Enzyme-linked immunosorbent assay (ELISA). The expression of RAGE in lung tissue was analyzed by Western blotting (B) and normalized to the levels of glyceraldehyde-3-phosphate dehydrogenase (GAPDH) (C). The concentration of lung tissue RAGE (D) by ELISA. The correlation between RAGE and calprotectin in lung tissue (r=0.9611; E). Results were obtained from three independent experiments. Data are expressed as mean ± standard deviation (SD) (n=4–6 per group). ##, P<0.01 compared to the control group; **, P<0.01 compared to the asthma group. 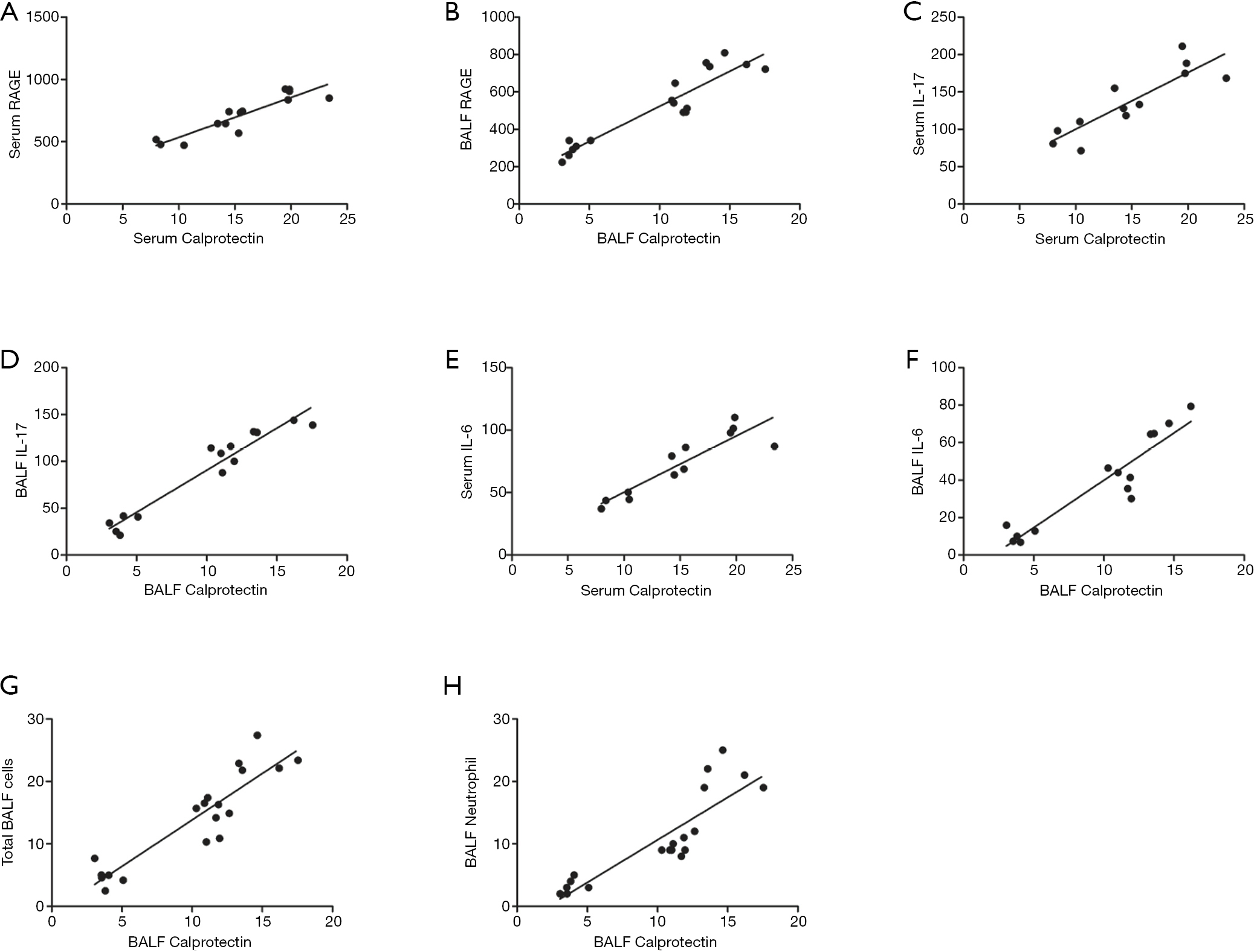 Neutrophils and their harmful secretions are well recognized as one of the reliable clinical biomarkers of lung disease progression (27). Pronounced airway neutrophil infiltration is a central feature of neutrophilic asthma, which is a major cause of both severe and refractory asthma (1,2). Based on our earlier findings, we developed a neutrophilic asthma model induced by OVA and FCA. Our results revealed airway hyperresponsiveness and a notable increase in neutrophil-predominant inflammatory cells in the OVA + FCA-induced rats. Neutrophil infiltration is known to involve a vast array of chemokines and cytokines. IL-17 and IL-6, among other cytokines, are crucial mediators of neutrophil recruitment and activation (28,29). Previous research has demonstrated that the airway tissues of asthmatic subjects with severe and persistent symptoms are characterized by preferential neutrophilic infiltration with elevated levels of both IL-17 and IL-6 (28-30). In addition to the increased airway neutrophils, our current study detected upregulation of IL-17 and IL-6 in both the serum and BALF from the asthmatic rats, which corroborated our model of neutrophil-mediated inflammation. Our primary finding was that pretreatment with RXM alleviated airway inflammation and modulated the expression of calprotectin and RAGE in neutrophilic asthmatic rats. Further, we found that blocking RAGE activation suppressed calprotectin expression and weakened the inflammatory response.

Recent evidence has shown that calprotectin exerts its proinflammatory functions mainly by binding to the pattern recognition receptor (PRR) RAGE and thus activating inflammation-related downstream signaling pathways and upregulating the expression of proinflammatory cytokines (33). Another study showed that calprotectin could be upregulated with a high AGE burden, thereby aggravating proinflammatory conditions via the activation of RAGE; calprotectin expression and proinflammatory conditions were significantly suppressed by RAGE antagonism (34). In our previous experiment, we found that the concentration of S100A8 in asthmatic rats was notably increased, with relatively higher levels of RAGE (35). In this study, we added the FPS-ZM1 group, to further verify that the significant elevation of calprotectin in our neutrophilic asthma model positively correlated with the concentration of RAGE and airway inflammation. Most importantly, all of these changes were alleviated by FPS-ZM1. These findings are in accordance with the results from the other studies discussed above.

As a PRR, RAGE has emerged as a key regulator of inflammatory processes (36), and it is strongly expressed in the lungs (12). Genome-wide association studies have identified RAGE as an important player in the pathogenesis of human asthma (37). Clinical studies have suggested an increased level of RAGE is present in sputum samples from asthmatic subjects; such levels correlate with disease severity (38). In a house dust mite asthmatic model, RAGE-knockout mice were devoid of most of the pathological features, including airway hypersensitivity, airway inflammation, and airway remodeling, that are found in wild-type mice. Furthermore, these findings were reproduced in an OVA-induced asthmatic model, which demonstrated the fundamental importance of RAGE in asthma (39). Additional analysis revealed that RAGE promoted IL-33 expression and mediated its downstream inflammatory signaling effects in response to asthma; the absence of RAGE impeded this reaction (40). In the present study, OVA + FCA-induced rats showed elevated RAGE expression levels, and RAGE inhibition attenuated OVA + FCA-induced airway inflammation, which confirms the pronounced significance of RAGE in neutrophilic asthma.

Given the inefficacy of corticosteroids in neutrophilic asthma, considerable interest has been given to potential alternative therapeutics. Because infections with bacteria and viruses are moderately associated with asthma severity (41), antibiotics, especially macrolides, have shown promise, as presented in decreased sputum neutrophil counts and alleviation of symptoms (42-44). Our previous study found that RXM could reduce airway inflammation by inhibiting the PI3K-δ/Akt signaling pathway and upregulating histone deacetylase 2 (HDAC2) expression (22). In the present study, RXM treatment reduced the number of airway inflammatory cells, neutrophils, and the concentration of inflammatory cytokines. RXM was also associated with downregulation of calprotectin and RAGE.

Reporting Checklist: The authors have completed the ARRIVE reporting checklist. Available at http://dx.doi.org/10.21037/atm-21-859

Conflicts of Interest: All authors have completed the ICMJE uniform disclosure form (available at http://dx.doi.org/10.21037/atm-21-859). The authors have no conflicts of interest to declare.