Liver fibrosis is the liver’s reaction to chronic injury and a major cause of fatal liver disease worldwide, especially in Asian countries. There are many causes of liver fibrosis, including metabolic disorders, cholestatic diseases, chronic hepatitis, and others (1,2). A hypoxia response system may contribute to the pathophysiology of liver fibrosis (3), and hypoxia may be a prominent determinant of liver fibrosis in pathological situations, Cellular hypoxia is an important feature of liver injury (4). Studies have shown that hypoxia regulates liver fibrosis by activating hepatic stellate cells (HSCs), and that HSC activation may be a key event in extracellular matrix (ECM) production (5), the biosynthetic changes of ECM production present as interstitial and perivascular fibrosis of liver. Despite advances in the characterization of liver fibrosis, the exact molecular mechanisms underlying hypoxia-induced liver fibrosis are still poorly understood. Therefore, clarification of these mechanisms and identification of potential therapies that could reduce the progression of hypoxia-induced fibrosis are urgently needed.

N-Myc downstream-regulated gene 2 (NDRG2) participates in the differentiation and growth of the liver cell and in hormonal responses (8,9). It has been demonstrated that NDRG2 is involved in liver histogenesis; the expression levels of NDRG2 mRNA and protein are markedly low in the early phases of histogenesis and are significantly higher in the later phases of histogenesis in the fetal livers of human (10,11). One study has shown that NDRG2 may be involved in the activation of LX-2 cells, which are HSCs (12). NDRG2 is a target of hypoxia-inducible factor 1 (HIF-1), which is a key mediator of the signaling pathway of hypoxia (13); however, the degree to which NDRG2 participates in the liver fibrotic process under hypoxic conditions is still unclear. This study tried to analyse the role of NDRG2 in hypoxia-induced liver fibrosis.

We present the following article in accordance with the MDAR reporting checklist (available at http://dx.doi.org/10.21037/atm-21-1298).

The cells were plated in 60 mm dishes and cultured in DMEM containing 10% FBS and 0.2% bovine serum albumin (BSA) and serum starved for 48 h after they reached 70% confluence. Cells were then incubated with TGF-β1 (2.5 ng/mL, Invitrogen Life Technologies, Carlsbad, CA, USA) for 0 or 24 h. Cells were placed in a humidified atmosphere normoxic conditions or in a hypoxic condition (37 °C, containing 1% O2, 5% CO2, and 94% N2).

Adenoviral vectors expressing human NDRG2 (Ad-NDRG2), β-galactosidase [Ad-LacZ, negative control (NC)], and enhanced green fluorescent protein (Ad-EGFP, NC) were purchased from Zhengyang Benyuan (Beijing, China). The cells were seeded in the 100 mm dishes and then incubated with Ad-NDRG2, Ad-LacZ, or Ad-EGFP in the serum-free DMEM for 2 h. The medium was then replaced with the fresh DMEM containing 10% FBS and cells were incubated for 48 h. The multiplicity of infection (MOI) was set at 40.

NF-κB small-interfering RNAs (siRNAs) or control siRNAs (scrambled sequence) were subcloned in lentiviral vectors, as previously reported (14,15). The NF-κB siRNA sequence was 5'-GGACCTACGAGACCTTCAA-3'. The NC siRNA was 5'-TTCTCCGAACGTGTCACGT-3'. The final titer of the recombinant virus was 5×108 TU/mL.

Total RNA of LX-2 cells was isolated by the TRIzol reagent (Invitrogen) and quantified. Complementary DNA (cDNA) was synthesized with the TaqMan Reverse Transcriptase Reagent Kit (Invitrogen) primed with oligo(dT) from 5 µg RNA and then analyzed using qRT-PCR. Then the mRNAs were detected with SYBR Green PCR Master Mix and an ABI PRISM 7500 Sequence Detection System (Thermo Fisher Scientific, Waltham, MA, USA), and relative quantification was performed with the comparative threshold cycle method. The PCR consisted of 10 pmol of the forward and reverse primers, 12.5 µL SYBR Green PCR Master Mix, and 5 µL of template cDNA in a total volume of 25 µL. The conditions of thermal cycling comprised a step of initial denaturation at 95 °C for 10 s, followed by 45 cycles at 95 °C for 5 s and 60 °C for 34 s.

The following primers were used for the human genes:

qRT-PCR and western blotting analysis revealed that the protein and mRNA levels of NDRG2 significantly decreased under hypoxia condition in LX-2 cells in a time-dependent manner (P<0.05) (Figure 1A,B).

The spontaneously immortalized human HSC cell line, LX-2, was grown to confluence and exposed to hypoxia (1% O2). The protein and mRNA expression levels of TGF-β1 and α-SMA increased as the duration of hypoxic exposure increased (P<0.05) (Figure 1A,C,D). The analyses of western blot and qRT-PCR showed that the mRNA and protein levels of TGF-β1 and α-SMA were increased in a time-dependent manner following incubation of LX-2 cells under the hypoxic (1% O2) conditions for 6 and 24 h (Figure 2A,B,C,D). These results demonstrated that HSC activation could be induced by hypoxia within 24 h. 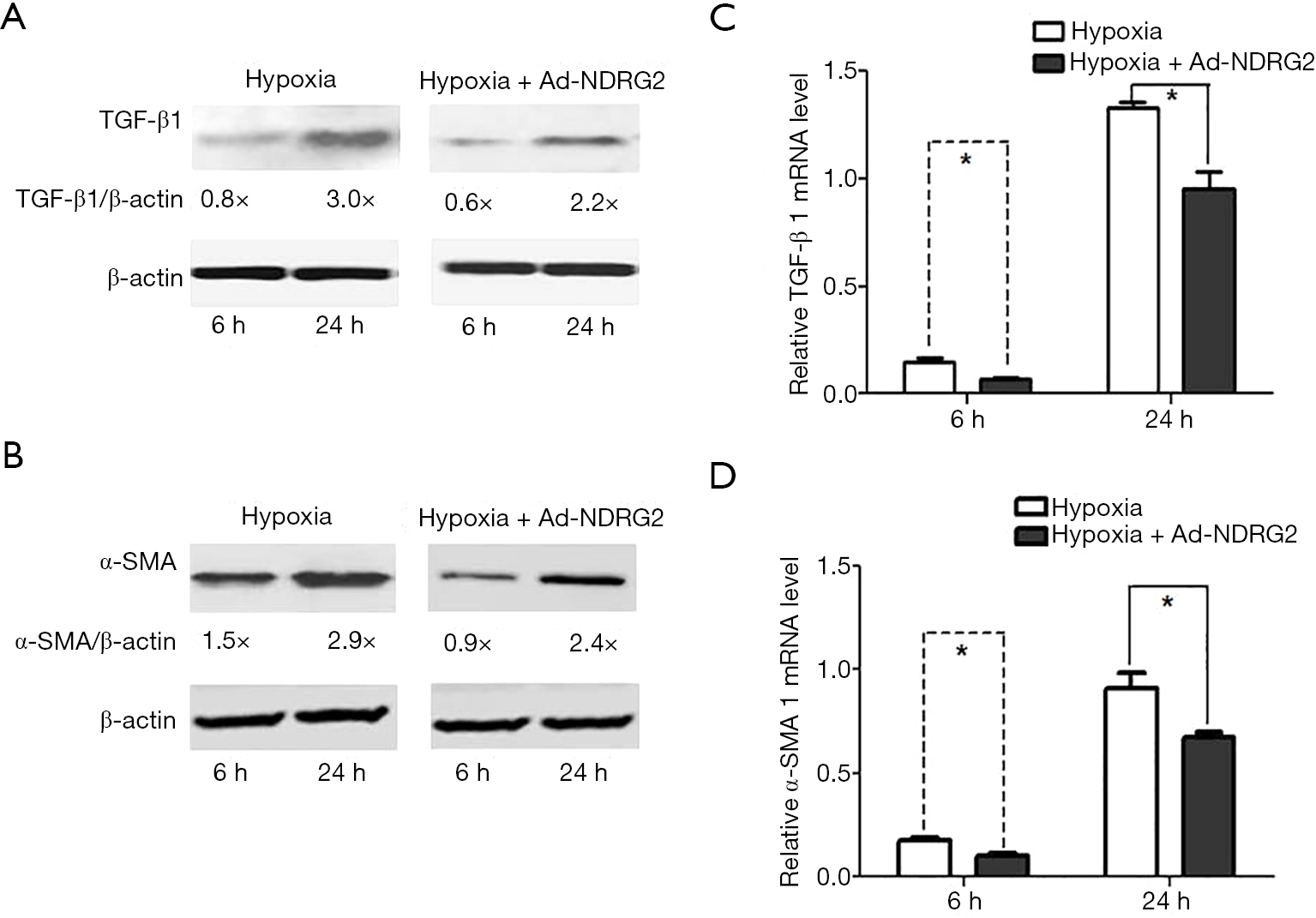 To examine the role of NF-κB, hypoxic NF-κB-silenced LX-2 cells were treated with Ad-NDRG2 (10 µM). The analyses of western blotting and qRT-PCR revealed that the mRNA and protein expression of NDRG2 decreased as the hypoxia exposure time increased (from 0 to 24 h) in NF-κB-silenced cells (Figure 3A,B). However, the protein and mRNA levels of TGF-β1 and α-SMA expression did not significantly change under Ad-NDRG2 treatment conditions (10 µM) as the hypoxia exposure time increased in these NF-κB-silenced LX-2 cells (Figure 3A,C,D), which indicated treatment with Ad-NDRG2 results in overexpression and the hypoxic conditions result in NDRG2 decrease had no effect on the mRNA and protein expression of α-SMA and TGF-β1 in hypoxia-induced LX-2 cells when NF-κB expression was blocked. Therefore, NDRG2 could not inhibit the expression of TGF-β1 in the absence of NF-κB. 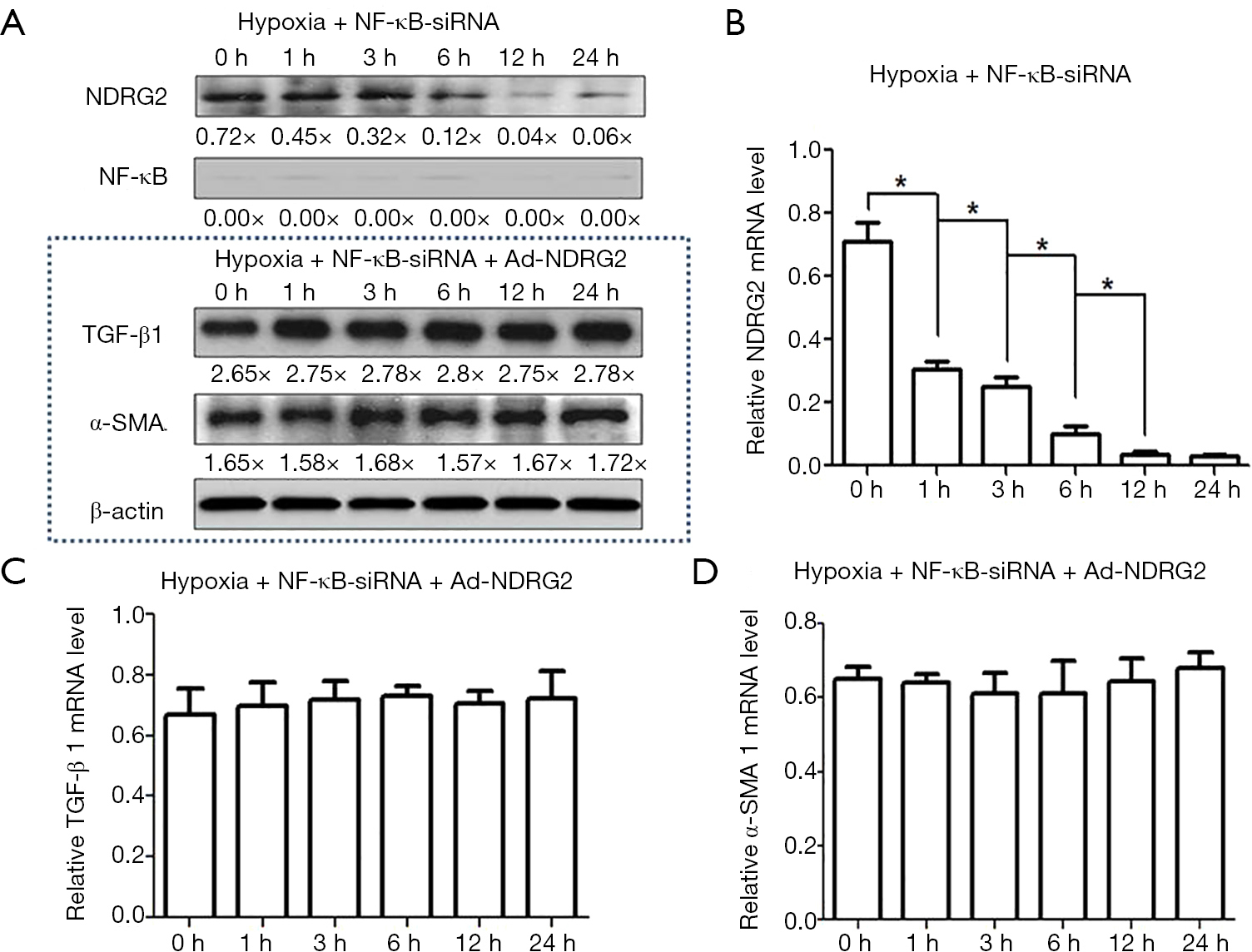 Figure 3 NDRG2 could not inhibit the mRNA and protein expression of TGF-β1 and α-SMA without NF-κB. (A,B,C,D) NF-κB protein expression was barely detected, indicating successful knockdown of the NF-κB gene. The results of western blot and qRT-PCR showed that the protein and mRNA expression of NDRG2 were decreased as the hypoxia exposure time increased (from 0 to 24 h) in NF-κB-silenced cells; however, the level of TGF-β1 and α-SMA expression did not significantly change when the cells were treated with Ad-NDRG2 (10 µM) as the hypoxia exposure time increased in these NF-Κb-silenced cells (LX-2HSCs). *, P<0.05.

Hypoxia is an important factor in cell damage, especially in acute and chronic liver injury, and may thus play an important role in the pathogenesis of liver fibrosis. The chronic injury may be related to the activation of HSCs in the hepatic fibrotic process (16). When stimulated, HSCs transition from a quiescent state to an activated state (17), and the levels of α-SMA can be regarded as a marker of HSC activation. In this study, we investigated whether HSCs are activated by hypoxia in vitro. The results showed that the protein expression of α-SMA increased, reaching a peak at 24 h after the induction of hypoxia, indicating that HSC activation occurred within the first 24 h of exposure to hypoxic conditions. NDRG2 has been found to be a downstream molecular target of HIF-1 (18), HIF-1 is thought to facilitate fibrosis through interaction with TGF-β1 (19). In this study, a decrease in the levels of the protein and mRNA expression of NDRG2 was found following exposure of LX-2 cells to hypoxic conditions (1% O2), which indicates that NDRG2 might be involved in hypoxia-induced liver fibrosis.

TGF-β1 may be the most potent fibrogenic cytokine in the liver (20,21), and a biologically inactive form of TGF-β1 can convert into an active form of that from in response to injury. When activated, TGF-β1 can regulate the transcription of profibrotic target genes via its cognate TGF-β1 receptor in the nucleus (22). The signaling pathway of TGF-β1 can influence aspects of the fibrogenic process, including activation of HSC, and the subsequent production of ECM during the process of liver injury (23,24), which present as the fibrosis of liver. We examined whether NDRG2 links hypoxia with the TGF-β1 signaling pathway in the fibrogenic process. In the present study, the analysis of qRT-PCR and western blot revealed an increased mRNA and protein expression of TGF-β1 in LX-2 cells under hypoxic conditions (1% O2), and compared to the control, treatment of LX-2 cells with Ad-NDRG2 (10 µM) under hypoxic conditions (1% O2) for 24 h reduced TGF-β1 and α-SMA expression, indicating that NDRG2 can reverse fibrosis through TGF-β1. Western blotting and qRT-PCR also demonstrated that the protein and mRNA expression of TGF-β1 and α-SMA did not significantly change after treatment with Ad-NDRG2 (10 µM) in NF-κB-silenced LX-2 cells under hypoxic conditions (1% O2), indicating that NDRG2 cannot inhibit the expression of TGF-β1 in the absence of NF-κB. Activation of NF-κB has been found to attenuate TGF-β1-induced cell death in liver cells (25). In our study, NDRG2 did not affect the activation of TGF-β1 signaling pathways in NF-κB-silenced LX-2 cells under hypoxic conditions (1% O2). These data suggest that NDRG2 can inhibit the expression of TGF-β1 in hypoxia-induced liver fibrosis via the NF-κB pathway.

Reporting Checklist: The authors have completed the MDAR reporting checklist. Available at http://dx.doi.org/10.21037/atm-21-1298

Conflicts of Interest: All authors have completed the ICMJE uniform disclosure form (available at http://dx.doi.org/10.21037/atm-21-1298). The authors have no conflicts of interest to declare.