Venous thromboembolism (VTE), a disease of venous return disorder, refers to the abnormal coagulation of blood in the veins, which causes the blood vessels completely or incompletely blocked, including pulmonary embolism (PE) and deep vein thrombosis (DVT) formation, which are two clinical manifestations of the same disease at various stages and various parts (1). VTE affects 5% to 15% of patients hospitalized for medical or surgical symptoms (2), which has always been the primary cause of sudden death in hospitalized patients and an important direct cause of death from tumors and surgical cases (3,4). With the increase of elderly patients and the acceleration of hospitalization turnover, the incidence of VTE has increased significantly. Studies have shown that 60% of VTE events occur during hospitalization or shortly after discharge, and the mortality rate of hospital-related VTE is much higher than the mortality rate of hospital infections. VTE occurring in the hospital poses a huge threat to the health of patients (5). Early prevention (6-10) of VTE has become a top priority that all medical institutions must face (11). However, because of many factors, including insufficient knowledge of the incidence and mortality of VTE, there are concerns about the risk of anticoagulation and bleeding in the standard course of treatment.

Further, there are also concerns about rising treatment costs and many others. The proportion of VTE norm assessment in China and even the Western Pacific region is significantly lower than in European and American countries, and the proportion of VTE norms and adequate full-course preventive medication is even lower (12). The results of the study, a multi-center cross-sectional study of VTE risk for inpatients in a tertiary hospital in China (13), showed that among the 13,609 hospitalized patients (6,623 medical patients, 6,986 surgery patients) in 60 research centers, 36.6% of hospitalized medical patients are high-risk groups of VTE, 53.4% of surgical inpatients are high-risk groups of VTE. With only 9% of those receiving VTE prophylaxis following the ACCP guidelines (the medical group, 6.0%; the surgical group, 11.8%), 9th edition. This result shows that the VTE prevention rate for inpatients in China is significantly lower than the multi-center Epidemiologic International Day results to evaluate patients at Risk for Venous Thromboembolism in the Acute Hospital Care Setting (ENDORSE) study (medical 43%, surgery 55%). Many medical institutions and hospitalized patients are still in a state of insufficient protection.

This study, a retrospective study, evaluated hospital-acquired VTE’s occurrence and the intensity of anticoagulant drugs before and after using AI-CDSS. We developed an AI-CDSS and connected it to Ruijin Hospital’s electronic medical record system. When the patients entered the trial group, the AI-CDSS system was activated; the system automatically collected patient information, scored VTE, bleeding risk, and the wells every 6 hours or whenever the doctor entered the patient’s electronic medical record system. When the assessment results showed that the patient was at increased risk, the system would give doctors corresponding preventive reminders.

According to the time when AI-CDSS was officially put into use in the clinical department, we identified 4,423 hospitalized patients who were at least 18 years of age and were not discharged in 24 hours from January to July 2020. Patients from the Trauma Surgery department, Respiratory, Emergency Intensive Care Unit (EICU), Medical Emergencies, Neurosurgery, Thoracic Surgery were included, as were patients monitored by AI-CDSS, which compared with the data of the same period in 2019. All procedures performed in this study involving human participants were in accordance with the Declaration of Helsinki (as revised in 2013). The study was approved by Shanghai Jiao Tong University School of Medicine, Ruijin Hospital ethics committee (approval No. 2020-164). Informed consent from participants was exempted by the ethics committee.

Inclusion criteria: inpatients aged ≥18 years came from 24 VTE high-risk departments where VTE incidence in 2019 was greater than 0.1% in Ruijin Hospital.

Exclusion criteria: hospitalized patients who met the following four conditions would not be included: (I) hospitalized patients were diagnosed with DVT or PE using the International Classification of Diseases, 10th Revision (ICD-10) at the time of admission; (II) had taken part in a similar clinical trial; (III) expected hospital stay <24 hours; (IV) full anticoagulation.

The standard process of data collection is: in the first step, the AI-CDSS automatically retrieved the medical records of patients discharged from the hospital 24 hours daily at 0:00. The admission diagnosis had no DVT/PE, and the discharge diagnosis had DVT/PE, which was a recorded hospital-acquired VTE incident in the database. Simultaneously, the AI-CDSS automatically summarized the information of patients with DVT diagnosis in the B-ultrasound and venography reports of discharged patients. In the second step, the designated clinical experts would review the patient information list obtained in the first step one by one, including but not limited to review of medical records, communication with the doctor in charge, and telephone/face-to-face communication with the patient to find whether it was hospital-acquired VTE. In the last step, the database administrator entered the results obtained above into the database, and the data inspector regularly checked the incoming information.

The primary endpoint of the study was diagnosed as a hospital-acquired VTE, which was defined as a patient who had no VTE-related diagnosis on admission but had a VTE-related diagnosis on discharge, or a patient who was judged as VTE by clinical experts through imaging examinations including ultrasound, CT angiography (CTA), etc. during the hospitalization. The information about patients’ demographic characteristics, including age, sex, body mass index (BMI), admission department, LOS, in-hospital outcome, discharge diagnosis (VTE, surgery, tumor, diabetes, heart failure, hypertension, renal failure, fracture, chronic lung-related diseases), anticoagulant drug use was collected. In these analyses, patients were divided into a control group and intervention group according to AI-CDSS usage.

Baseline characteristics are presented as numbers (%) for categorical data, means ± SDs for normally distributed continuous data. Categorical variables are evaluated by the chi-square test or Fisher exact probability method. For continuous variables, used t-test or analysis of variance if they met normal distribution, and used rank-sum test if they did not meet normal distribution. Crude hospital-acquired VTE rates were calculated using the number of hospital-acquired VTE as the numerator, and the number of inpatients in 2019 (control group) and 2020 (intervention group) were found as the denominator. Statistical significance was set up at two-tailed P values <0.05. All statistical tests were performed by using R version 4.0.2.

Characteristics of the patients 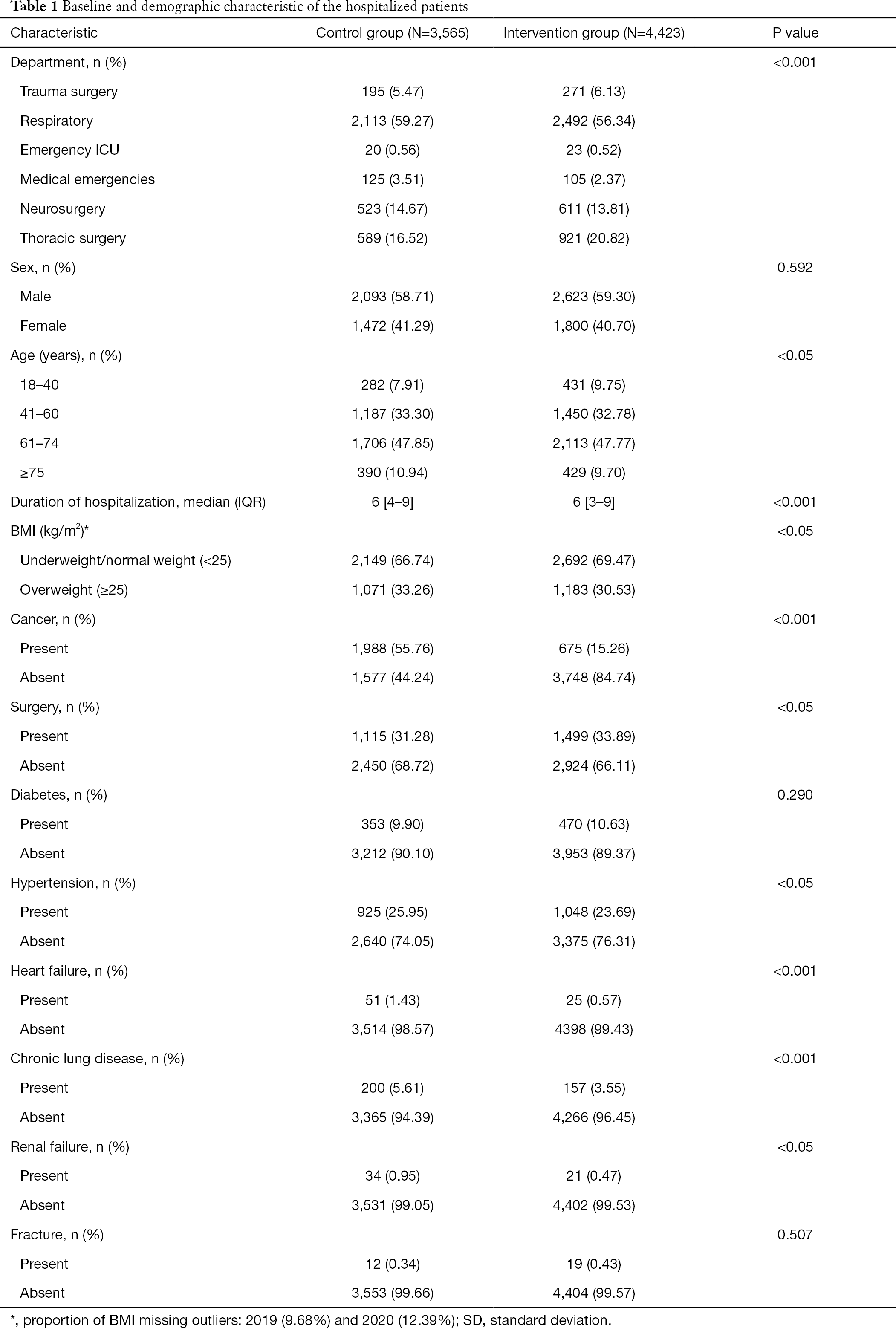 Patients in the intervention group [median 63 (IQR 16) years] were older than those in the control group [median 62 (IQR 15) years], but 80% of patients in both groups were concentrated between 41–74 years old. Compared with the control group, the duration of hospitalization was shorter in the intervention group. There was no significant difference in sex (P=0.592), diabetes (P=0.290), and fracture (P=0.507) between the two groups. Except for patients with surgery, there was a statistical difference in that the number of patients with cancer, hypertension, heart failure, chronic lung disease, renal failure in 2019 was more than in 2020, respectively (Table 1).

Distribution of VTE events during hospitalization 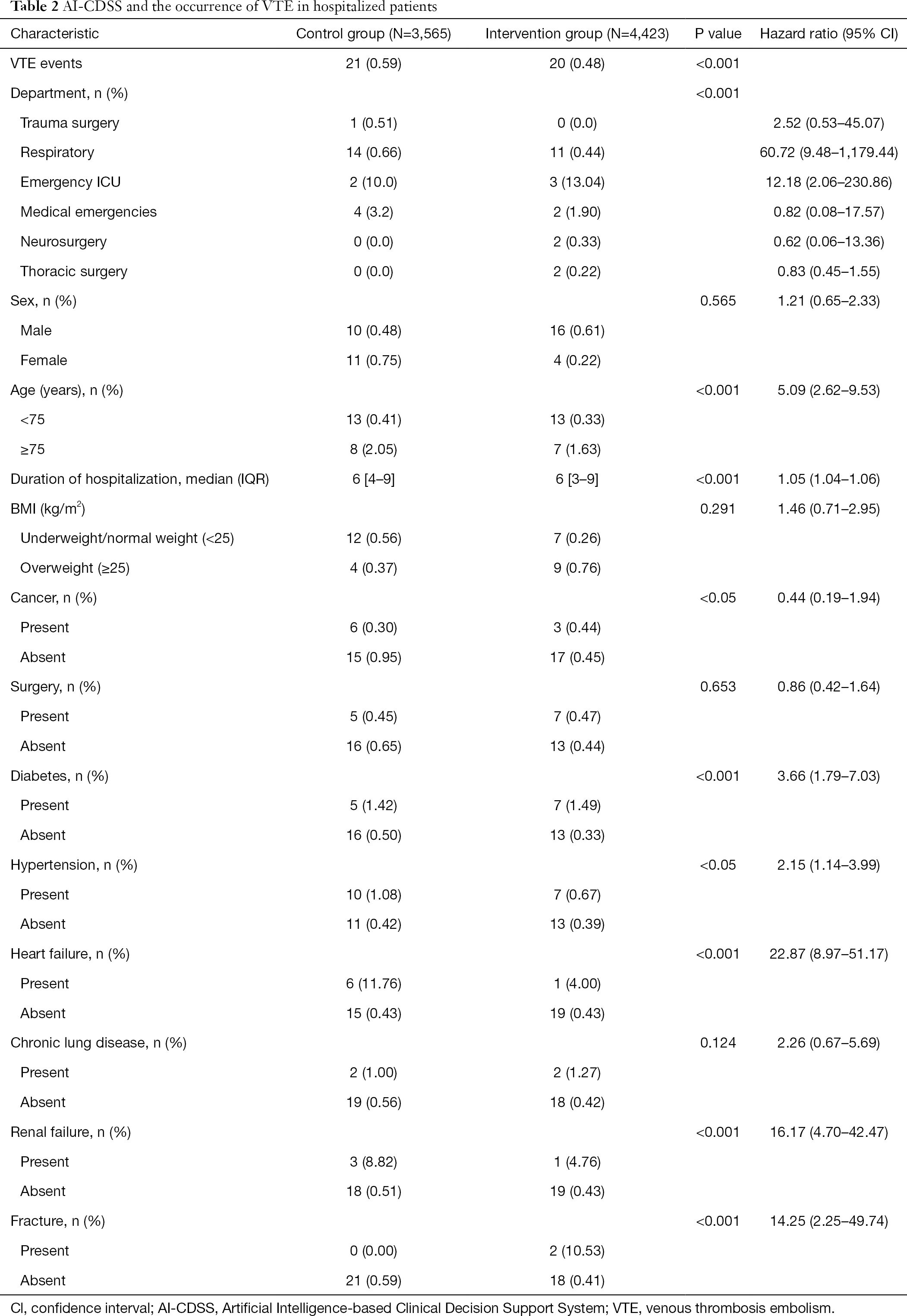 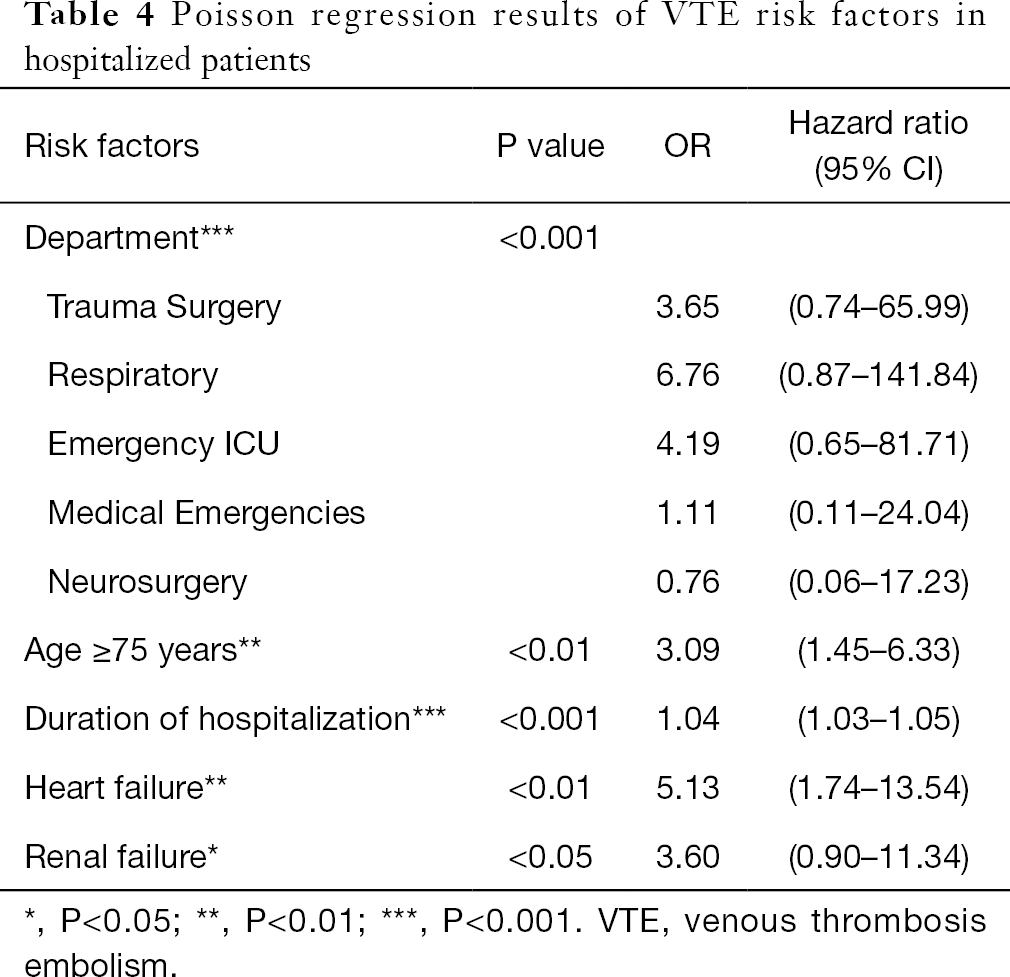 Implementing AI-CDSS can help clinicians identify hospitalized patients at increased VTE risk, which has also been confirmed in other similar studies (14). This is the first real-word study on the effectiveness of AI-CDSS to improve the incidence of hospital-related VTE in China. VTE has the characteristics of insidious onset, rapid onset, and high risk of death. Studies have shown that 60% of VTE events occur during hospitalization or shortly after discharge, a potential major hidden danger to medical quality and safety. However, traditional manual diagnosis on data indicators consumes most labor and time and is also difficult to predict accurately. The study showed that the incidence of VTE was reduced by 19.35% after implementing AI-CDSS. This shows that AI-CDSS has a positive role in VTE risk management.

Evidence-based educational programs can be successful in increasing using prophylaxis by clinicians. Information tools for patient risk assessment can also improve physicians’ use of different preventive therapies (15-17). ENDORSE used the American College of Chest Physicians (CHEST), 7th edition (9,18) guidelines, while the present study used CHEST, 9th edition (7-9), guidelines (which recommended the Caprini and Padua models for VTE risk evaluation). AI-CDSS in our study may have increased the accuracy of risk detection compared with ENDORSE (19). When the patients entered the trial group, the AI-CDSS system was activated; the system automatically collected patient information and scored VTE, bleeding risk, and wells every 6 hours or whenever the doctor entered the patient’s electronic medical record system. When the assessment results showed the patient was at increased risk, the system would give doctors corresponding preventive reminders: for VTE high-risk and Wells high-risk patients, AI-CDSS recommended intravenous B-ultrasound; for VTE high-risk and Wells low-risk patients, D-dimer test (DDI) was recommended. For VTE high-risk and bleeding low-risk patients, preventive anticoagulation or/and mechanical prevention was recommended. For VTE intermediate-risk, mechanical prevention or/and drug prevention was recommended. A warning would be given for VTE intermediate-high-risk and bleeding high-risk if a doctor prescribed anticoagulant drugs. For all patients prescribed mechanical prophylaxis, AI-CDSS determined whether the lower extremity ultrasound screening had been performed within 72 hours; if not, it reminded the doctor. If the ultrasound examination found DVT formation (including suspicious) and CT pulmonary angiography (CTPA) finds PE (including suspicious), AI-CDSS reminded the doctor paid attention via corporate WeChat. Unfortunately, the study is a retrospective study; it is impossible to compare specific interventions’ effects. This will be further perfected in the succeeding study.

The study also found that the anticoagulant drugs use rate was 22.88% in the intervention group, which increased by 14.57% after implementing AI-CDSS.

Research risk control is reflected in anticoagulation treatment. Researchers will conduct publicity and education on patients and their families and judge whether they have bleeding tendencies with their symptoms, signs, and blood routines. If bleeding occurs, clinicians at once stop using low-molecular-weight heparin and have medical staff perform relevant treatments, including cold compress, puncture, aspiration for the Bleeding Academic Research Consortium (BARC) type 1, and intravenous injection protamine for the BARC type 2, type 3, type 4, type 5. The professional clinicians will confirm every VTE event (including suspected cases) to ensure the research case’s authenticity and reliability and the accuracy of the data quality, and each enrolled patient will experience two follow-ups. In the first follow-up, within 24 hours after the patient is admitted, AI-CDSS will automatically collect relevant data from the hospital information system to automatically complete the VTE risk assessment. In the second follow-up, when the patient is discharged, AI-CDSS collects relevant data from the hospital information system, and a qualified doctor confirms the data that needs to be confirmed by the clinician. No added medical activities are added during the whole research process, and AI-CDSS automatically collects all data, and the compliance of the research subjects is high.

Funding: This study was supported by the Fund provided by The Special Project of Integrated Traditional Chinese and Western Medicine in Shanghai General Hospital (ZHYY-ZXYJHZX-201901) and the Project of Continuous Improvement of Medical Quality Evidence-based Management (YLZLXZ-2020-008).

Reporting Checklist: The authors have completed the STROBE reporting checklist. Available at http://dx.doi.org/10.21037/atm-21-1093

Conflicts of Interest: All authors have completed the ICMJE uniform disclosure form (available at http://dx.doi.org/10.21037/atm-21-1093). The authors have no conflicts of interest to declare.

Ethical Statement: The authors are accountable for all aspects of the work in ensuring that questions related to the accuracy or integrity of any part of the work are appropriately investigated and resolved. All procedures performed in this study involving human participants were in accordance with the Declaration of Helsinki (as revised in 2013). The study was approved by Shanghai Jiao Tong University School of Medicine, Ruijin Hospital ethics committee (approval No. 2020-164). Informed consent from participants was exempted by the ethics committee.