The removal of foreign body ingestion in the upper gastrointestinal tract: a retrospective study of 1,182 adult cases

Foreign body (FB) ingestion is a common and urgent problem presenting to gastroenterology (GI) departments and is defined as swallowing anything purposely or unintentionally, including food, medication, toys, coins or other objects (1). An American survey reported the estimated annual incidence of FBs ingestion was 120,000 cases (2). In those patients, most ingestions were linked to dining, whilst others were associated with psychiatric disorders, alcohol dependence, drug abuse, digestive diseases (including achalasia of the cardia), or other abnormal conditions (3-5). The majority of ingested FBs (80–90%) pass through the GI tract spontaneously andonly 10–20% require endoscopic intervention and <1% need surgery (6-9). Endoscopy has become the preferred choice to remove FBs not only because it avoids the need for surgery, but because it uses conveniently accessible technical devices and advanced visualization, may simultaneously diagnosis other diseases, and is cost efficient in comparison to other methods (10-12). However, FBs may not be discovered in every procedure (13,14) and the detection rate may be as low as 75%. Older age and early presentation have been shown to be independent predictors for the presence of FBs (15,16), and occasionally, FB ingestion in the upper-GI tract may cause severe complications, such as perforation, internal bleeding or death (17). According to a previous study (18), an average of 1,500 people died from FBs ingestion each year in the United States. Moreover, most researchers agree that the types, sizes, and the duration of impaction were considered as risk factors linked with complications (12,19,20). This retrospective study aimed to identify factors correlated to the presence of FBs as well as complications associated with their presence and removal, such that timely and appropriate treatments may be applied for patients with FB ingestion. We present the following article in accordance with the STROBE reporting checklist (available at http://dx.doi.org/10.21037/atm-21-829).

This retrospective study was conducted in the Department of the Gastroenterology, Tianjin Medical University General Hospital. A total of 1,438 patients presenting with suspected FBs between June 2014 and April 2019 were included. Patients with capsule endoscopies and stents, repeated endoscopies, and others whose FBs were extracted from the lower GI tract were excluded from the study. Eventually, the study enrolled 1,311 adult patients (781 women and 530 men) ranging from 18 to 89 years of age and with a mean age of 54.27±3.03 years. This study was approved by the Institutional Review Board of Tianjin Medical University General Hospital (Ethical No. IRB2020-WZ-141). All procedures performed in this study involving human participants were in accordance with the Declaration of Helsinki (as revised in 2013). Individual consent for this retrospective analysis was waived.

The vital signs, temperature, breathe, pulse and blood pressure should be recorded for every patients. And a physical examination focused on the patient’s general condition and was to assess signs of any complications (21). Before the foreign-body extraction procedure, plain chest radiography, or abdominal radiography if there was a suspicion of a gastric or duodenal foreign body. Upper GI endoscopy was performed in each patient under topical pharyngeal anesthesia using lidocaine, or general anesthesia using propofol or ketamine. Flexible endoscopes (mainly GIF-Q260 and GIF-Q290; Olympus Optical Co, Ltd, Tokyo, Japan) were adopted. Devices used included foreign body forceps, snare, rat-tooth forceps, basket, biopsy forceps, and alligator jaws forceps. A snare was used to extract irregular objects such as dental prostheses or metallic FBs and a latex protector hood or a transparent cap was utilized to avoid damage to the GI tract during endoscopic procedures.

Demographic data including age, gender, clinical data containg history of other diseases, time from ingestion to presentation to the emergency department, and endoscopic data recording types, location of FBs, duration of FBs ingestion, endoscopic devices, the methods of anesthesia, and complications were collected for analysis.

T tests were used to compare the mean and standard deviation, Chi-square tests were to contrast proportions, and logistic regression analyses were to assess the risk factors of FBs presence and complications. All tests were two-tailed and P<0.05 was defined as statistically significant. SPSS statistical software (ver. 13.0; SPSS Inc., Chicago, IL, USA) was applied to complete the statistical analyses.

Characteristics and risk factors of patients with foreign body ingestion

Significant variables that estimated the presence of FBs based on Pearson’s Chi-square tests included gender, age, and duration of FB ingestion (P<0.05). The risk factor of FBs presence was the duration less than 24 h (OR 3.67; 95% CI: 2.05–6.64) via the logistic regression analysis (Table 1).

The type and location of FB 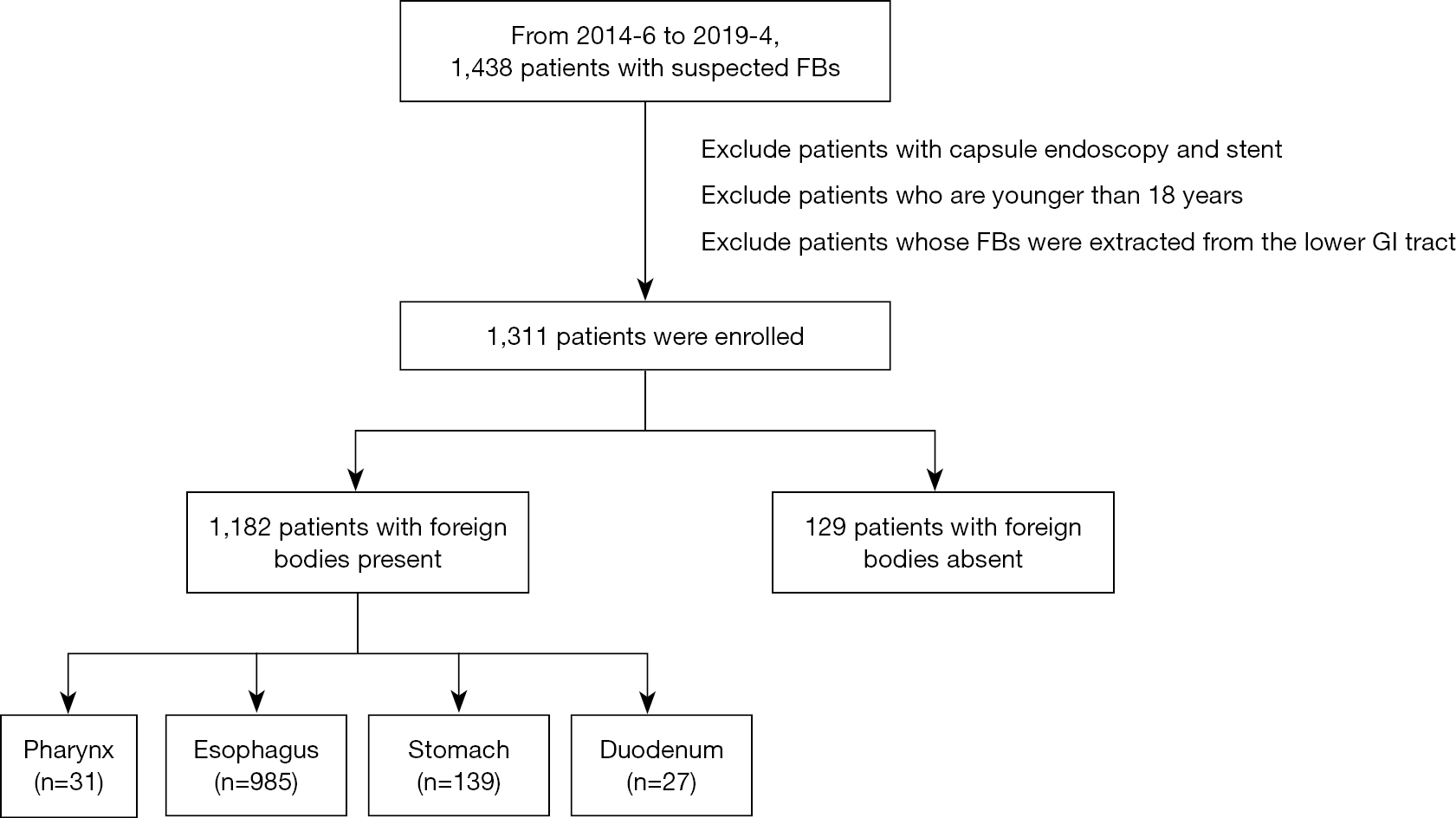 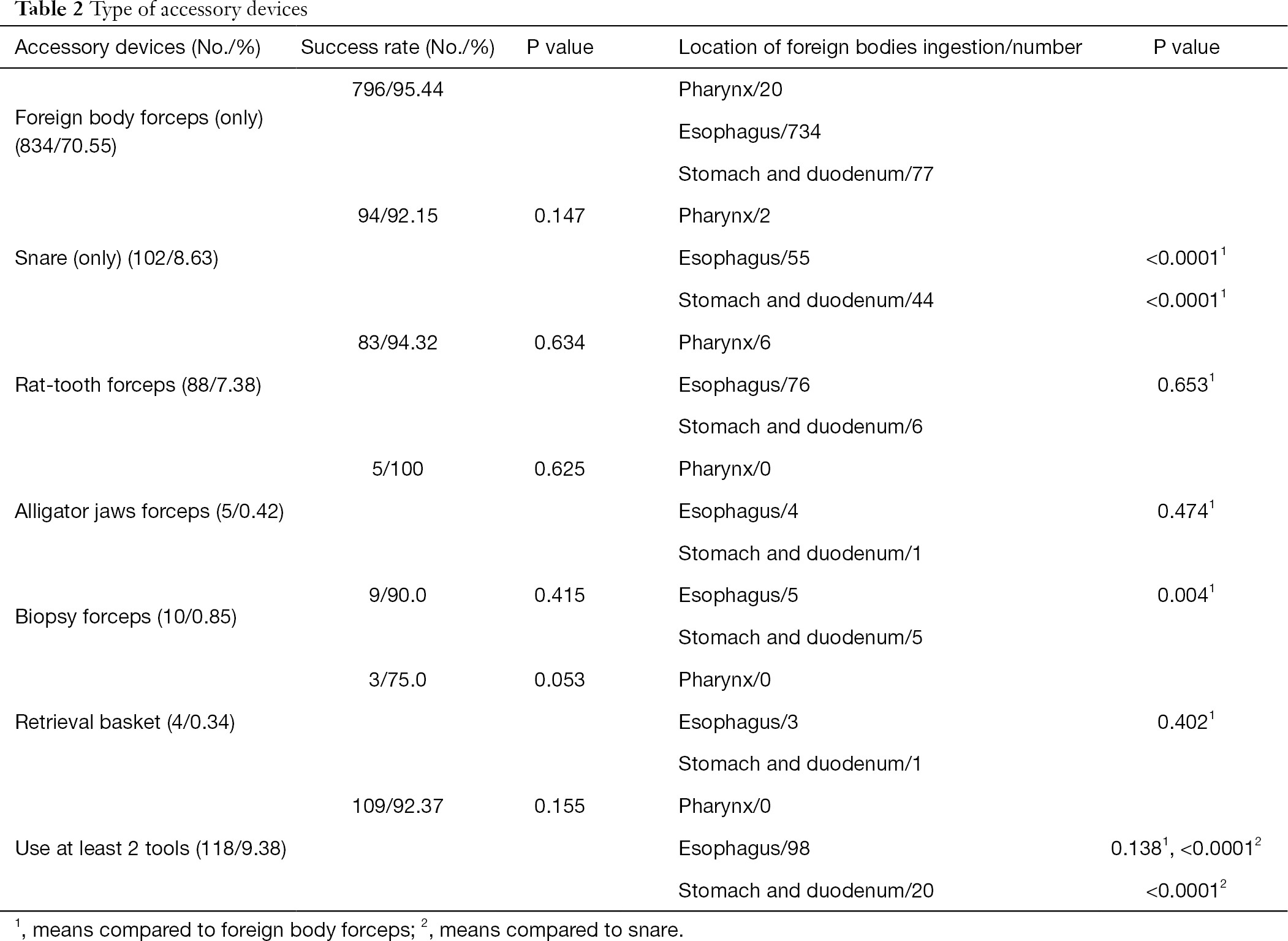 While there were no deaths, 239 patients (20.22%) developed complications when endoscopy was used. The most frequent of these were hemorrhage (n=162, 67.78%) and perforation (n=65, 27.20%) as shown in Table S2. However other serious complications such as neck subcutaneous emphysema or mediastinum emphysema, esophagitis and cervical space infection or mediastinitis, rupture of large blood vessels, or esophagotracheal fistula observed in previous studies (23), were not seen in ours. 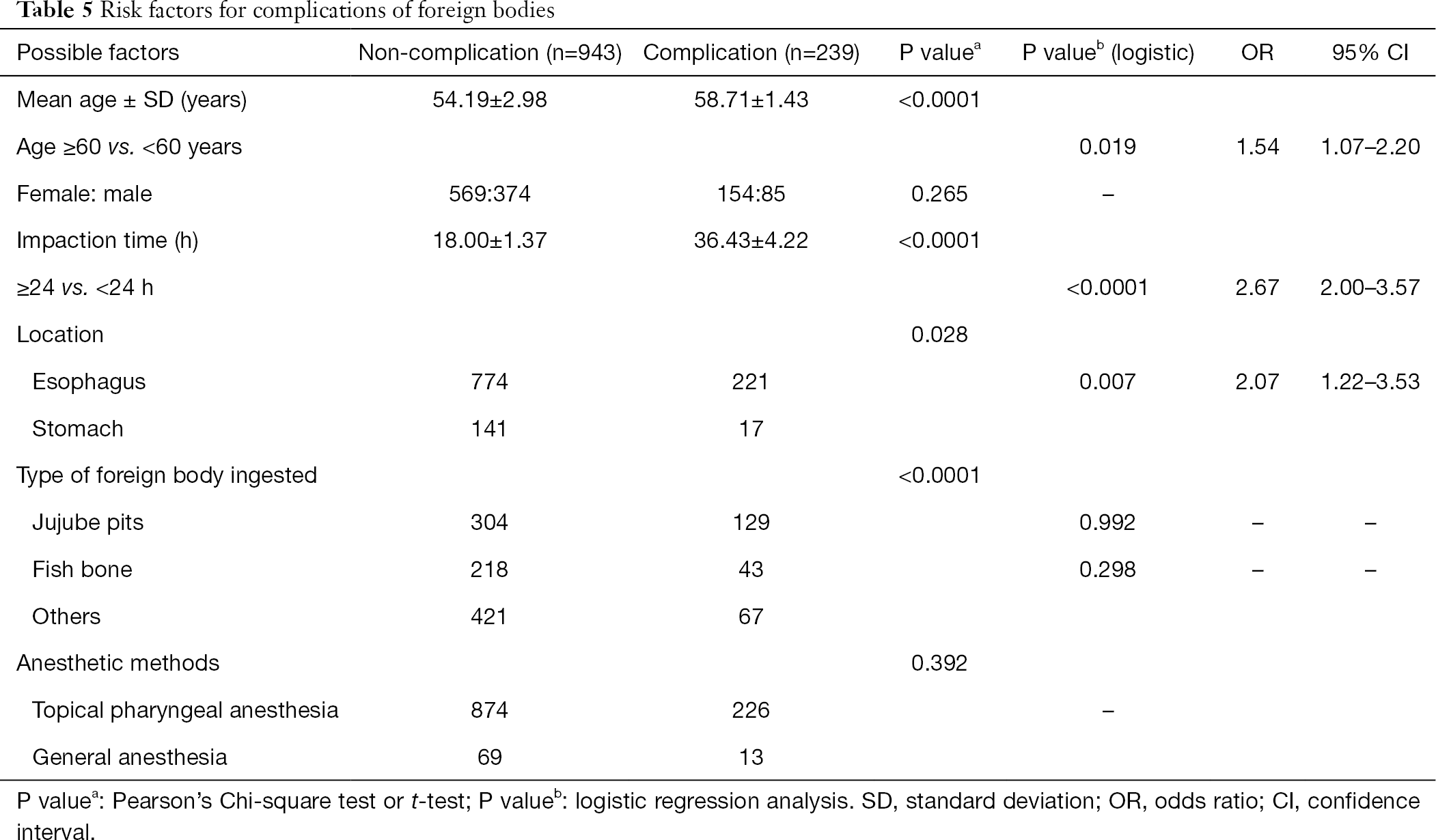 FB ingestion is a universal clinical problem. Of the 1,131 patients involved in this study FBs were found in 90.16% patients via endoscopic procedures. Complications were observed in 239 cases (20.22%), of which hemorrhage (162/239, 67.78%) was the most frequent. Risk factors of complications included age ≥60, duration of FB ingestion ≥24 h and esophageal FBs.

In our study, nearly 59% of FBs were fish bones and jujube pits, which is similar to previous findings indicating that most FB ingestions were accidental food and bone impactions (24-26). Moreover, a great majority of FBs were esophageal as also previously published (1,17). Foreign bodies forceps successfully removed generous esophageal FBs including jujube pits, while snare was the best choice to remove FBs ingested in the stomach, such as dental prostheses. While our findings were largely consistent with those of Geng [2017] (17) who found no distinct differences in the success rates between general and topical pharyngeal anesthesia, our data conveyed a trend towards a lower complication rate (15.85% vs. 20.55%) and higher removal rate (96.34% vs. 92.73%) under general anesthesia. More research is required to determine whether these benefits of general anesthesia are more broadly apparent.

The complication rate after removal of FB ingestion was around 20% in our patients, although this has ranged from fewer than 5% to nearly 50% in other studies (20,27,28). A possible reason for the high complication rate seen in some studies may be that mucosal injury and hematoma are classified as mild complications, appearing in up to 29.5% in one study (17). Additionally, fever (≤38 °C), abrasions, small erosions, abscesses, ulcers, and mucosal laceration have also been listed as complications (27). Agreement on the criteria by which complications are classified and their reporting would greatly improve the validity and accuracy of findings.

Risk factors for FBs ingestion leading to complications have been previously observed in relation to the types and size of FBs, duration of FBs impaction and delay in endoscopic management (1,13,15,20). In our paper we also identified age ≥60 and esophageal FBs as additional risk factors. A longer duration of FB ingestion is associated with a greater risk of harm. The danger of complications in cases with a duration of over 24 h was 2.67-fold higher than those with a duration of less than 24 h. Furthermore, the frequency of complications increases with age. This might be due to several factors: firstly, the swallowing function and sensation are less sensitive in the elderly than in younger adults; secondly, most patients wearing dentures are elderly; thirdly, the overall physical condition of elderly patients is weaker and less able to tolerate trauma than those younger. Esophageal FBs carried a higher risk of complications in comparison to the stomach because of the narrower lumen and thinner muscular layer.

FBs ingestion can be treated successfully and safely in more than 92% of cases in this study, which was similar to most researches (16). The factors related to a successful procedure include the compliance of patients, appropriate extraction devices, experienced endoscopists, the radiological evaluation, the degree of cooperation between endoscopists and nurses, and so on.

The chief limitations to this study are its retrospective nature and the uneven number of patients in the general anesthesia and endoscopy groups. Although retrospective research might increase the deviations of research results, we collected the associated data of patients with foreign bodies ingested from June 2014 and April 2019 to expand the sample size and avoid the condition. The latter result in the distribution of adverse outcomes towards the general anesthesia group. Further investigation into the benefits of general anesthesia in removing FBs is strongly recommended.

In conclusion, the duration of ingestion before removal was the common factor affecting the presence of FBs and its complications, while age ≥60 and esophageal FBs were other risk factors contributing to complications. Taking these possible risk factors into consideration, appropriate endoscopic interventions could be executed to treat patients with FB ingestion.

We appreciate the efforts all of our colleagues have made towards in this study.

Funding: This study was supported by a grant from the National Natural Science Foundation of China (No. 81570489).

Reporting Checklist: The authors have completed the STROBE reporting checklist. Available at http://dx.doi.org/10.21037/atm-21-829

Conflicts of Interest: All authors have completed the ICMJE uniform disclosure form (available at http://dx.doi.org/10.21037/atm-21-829). The authors have no conflicts of interest to declare.

Ethical Statement: The authors are accountable for all aspects of the work in ensuring that questions related to the accuracy or integrity of any part of the work are appropriately investigated and resolved. This study was approved by the Institutional Review Board of Tianjin Medical University General Hospital (Ethical No. IRB2020-WZ-141). All procedures performed in this study involving human participants were in accordance with the Declaration of Helsinki (as revised in 2013). Individual consent for this retrospective analysis was waived.