Improvement of pathological staging system for neuroendocrine tumors of the lung

The International Association for the Study of Lung Cancer launched a worldwide tumor, node, and metastasis (TNM) staging project (4,5), and the TNM staging system is used for NETL. However, a recent study pointed out that staging systems for NETL should include histotype (6). Further, the use of tumor size for staging the T-category in lung carcinoids has been questioned (7). Therefore, staging of these tumors needs to be optimized. This study aimed to develop a new pathological staging system that could refine prognostic stratification and guide subsequent treatment in NETL. We present the following article in accordance with the STROBE reporting checklist (available at http://dx.doi.org/10.21037/jgo-20-5910).

The study was conducted in accordance with the Declaration of Helsinki (as revised in 2013).

Patient data were obtained from the Surveillance, Epidemiologic, and End Results (SEER) database. Inclusion criteria were: site recode “ICD-O-3/WHO 2008” (International Classification of Diseases for Oncology, Third Edition) restricted to “Lung and Bronchus”; histotype pathologically confirmed as typical pulmonary carcinoids {ICD-O-3 [8240/3]}, atypical pulmonary carcinoids {ICD-O-3 [8249/3]} or large cell neuroendocrine carcinomas {ICD-O-3 [8013/3]} between 2004 and 2015; known patient age, TNM stage, and survival data; surgical treatment. Considering its strong invasion ability and unique pathological characteristics, SCLC was not included in this study (6). Besides, patients whose tumors could not be confirmed for diaphragm invasion status were excluded. TNM staging was converted to the 8th edition of the TNM staging system (5). Low-grade (typical pulmonary carcinoids), intermediate-grade (atypical pulmonary carcinoids) and high-grade (large-cell neuroendocrine carcinomas) neuroendocrine histotypes were designated as G1, G2 and G3, respectively. Overall survival was used as an endpoint of survival. Patients not diagnosed with NETL for the first time were excluded. Finally, 6,408 patients were included.

In the Shanghai cohort, Shanghai resident patients administered lung resection and pathologically confirmed with G1, G2 and G3 histotypes, respectively, at Shanghai Pulmonary Hospital between January 2009 and September 2018 were included. The pathologic diagnosis was confirmed after bronchoscopic examination, percutaneous lung puncture and/or surgical resection according to the 2015 World Health Organization (WHO) classification (1). Patients with no TNM stage assessment or survival data were excluded (Figure S1). According to the National Comprehensive Cancer Network (NCCN) guidelines (8), surgical resection was administered in TNM stage-I to II and select stage-III patients. Adjuvant treatment was routinely recommended for TNM stage-IIB to IIIB patients and individuals with stage IB-IIA large-cell neuroendocrine carcinoma, and comprised 4–6 cycles of a platinum-based doublet therapy.

In the SEER cohort, patients were randomly assigned at a 1:1 ratio to the training (n=3,204) and validation (n=3,204) sets. In the SEER training set, significant variables were selected to generate a survival tree by hazards ratio (HR) for survival. A new staging system was proposed by incorporating groups with similar HRs and validated in the SEER validation set. Moreover, the new and TNM staging systems were compared in the SEER and Shanghai cohorts. Furthermore, for patients in whom adjuvant chemotherapy is recommended based on the NCCN guidelines (TNM stages IIB to IIIB; IB and IIA large-cell neuroendocrine carcinomas), the value of adjuvant chemotherapy based on the TNM and new staging systems was assessed.

Continuous variables with normal distribution were presented as mean ± standard deviation (SD), and categorical data as number (percentage, %). Two-tailed t-test and the chi-square test were performed to examine the differences in clinical variables between the two sets. Overall survival curves were generated by the Kaplan-Meier method, and differences were examined by the log-rank test. Variables with P<0.1 in univariate analysis and treatment relevant parameters were included in multivariate Cox regression analysis and the random forest (RF) model, respectively. The proportional hazard assumption in the Cox model was tested based on the Schoenfeld residuals, and 1,000 bootstrapping replications were performed. C-index, net reclassification improvement (NRI) and integrated discrimination improvement (IDI) were further used to assess the survival prediction abilities of different staging systems. NRI was calculated from the survival probabilities of the ordered staging systems among those moving up and down the stage classifications (9), and IDI was calculated as the difference in the proportion of explained variation at time t between staging systems (10). A P value of less than 0.05 was considered statistically significant. Interaction assessments were performed by the likelihood ratio test. Kaplan-Meier curve generation and the log-rank test were performed with GraphPad Prism version 7.00 for Windows (GraphPad Software, Inc., www.graphpad.com). Statistical analysis was performed with the R version 3.5.3 software (http://www.r-project.org/).

Establishment of a new staging system in the SEER cohort 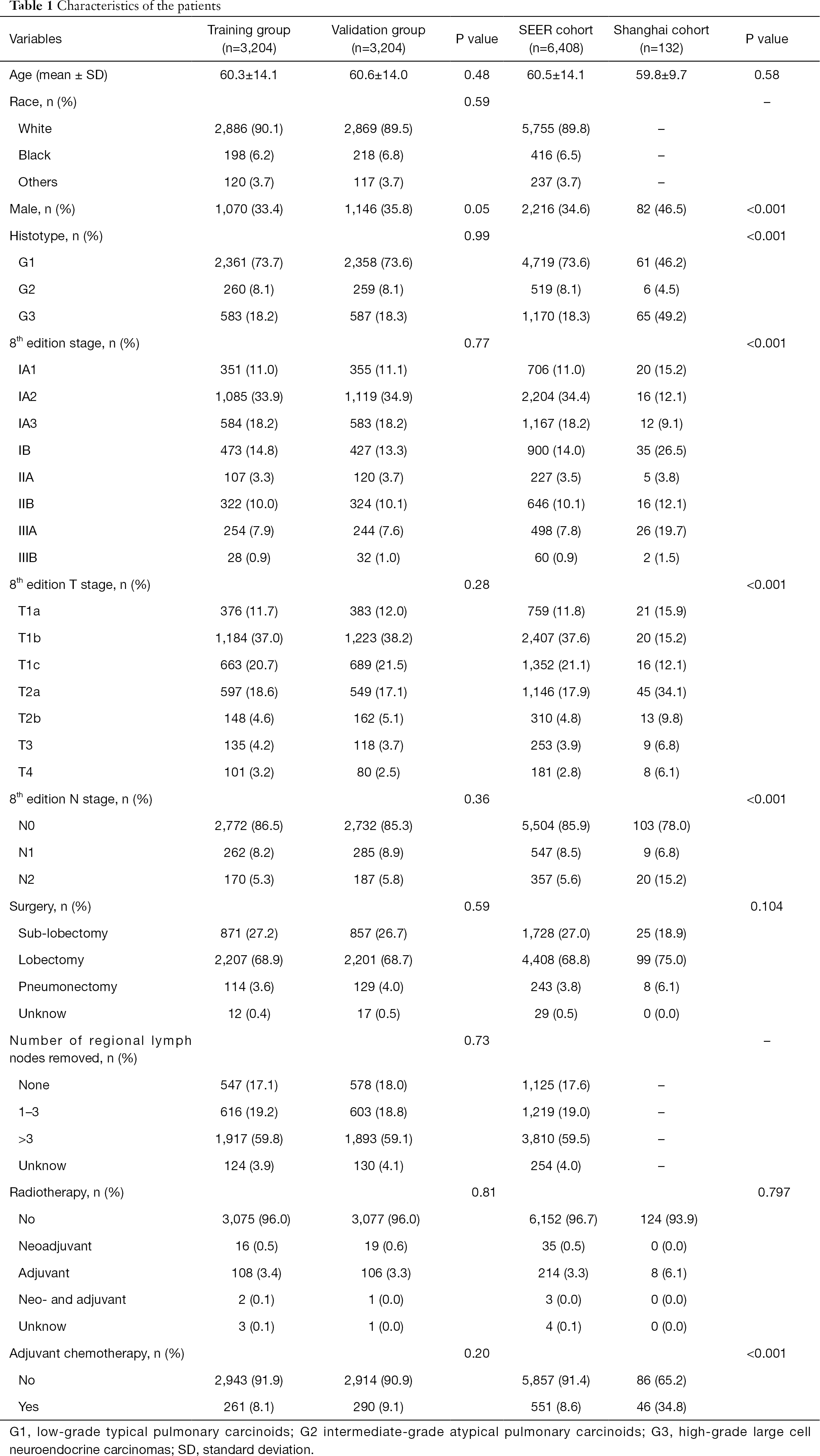 Univariate Cox regression analysis showed that age, race, gender, histology, adjuvant chemotherapy, and TNM stage were all significant variables; however, hazards ratios for survival in TNM stages IA2 to IIA were similar, ranging from 0.96 to 1.33 (IA1 as reference, Table 2). Multivariate Cox analysis revealed that N stage was independently associated with survival, while T stage was not. The histotypes G2 (HR =2.42, 95% CI: 1.81–3.23) and G3 (HR =5.89, 95% CI: 4.83–7.19) were significantly associated with reduced survival compared with G1. Consistently, histotype and N-stage were significantly associated with survival in the RF model (importance: 0.102, 0.005, Table 2). In subgroup analysis, tumor histotype could better discriminate patient survival in each subgroup of the N stage compared with the T stage (Table 3). Subgroup analysis based on histotype showed that the TNM stage was not suitable for discriminating patient survival in different histotypes (Table S1). 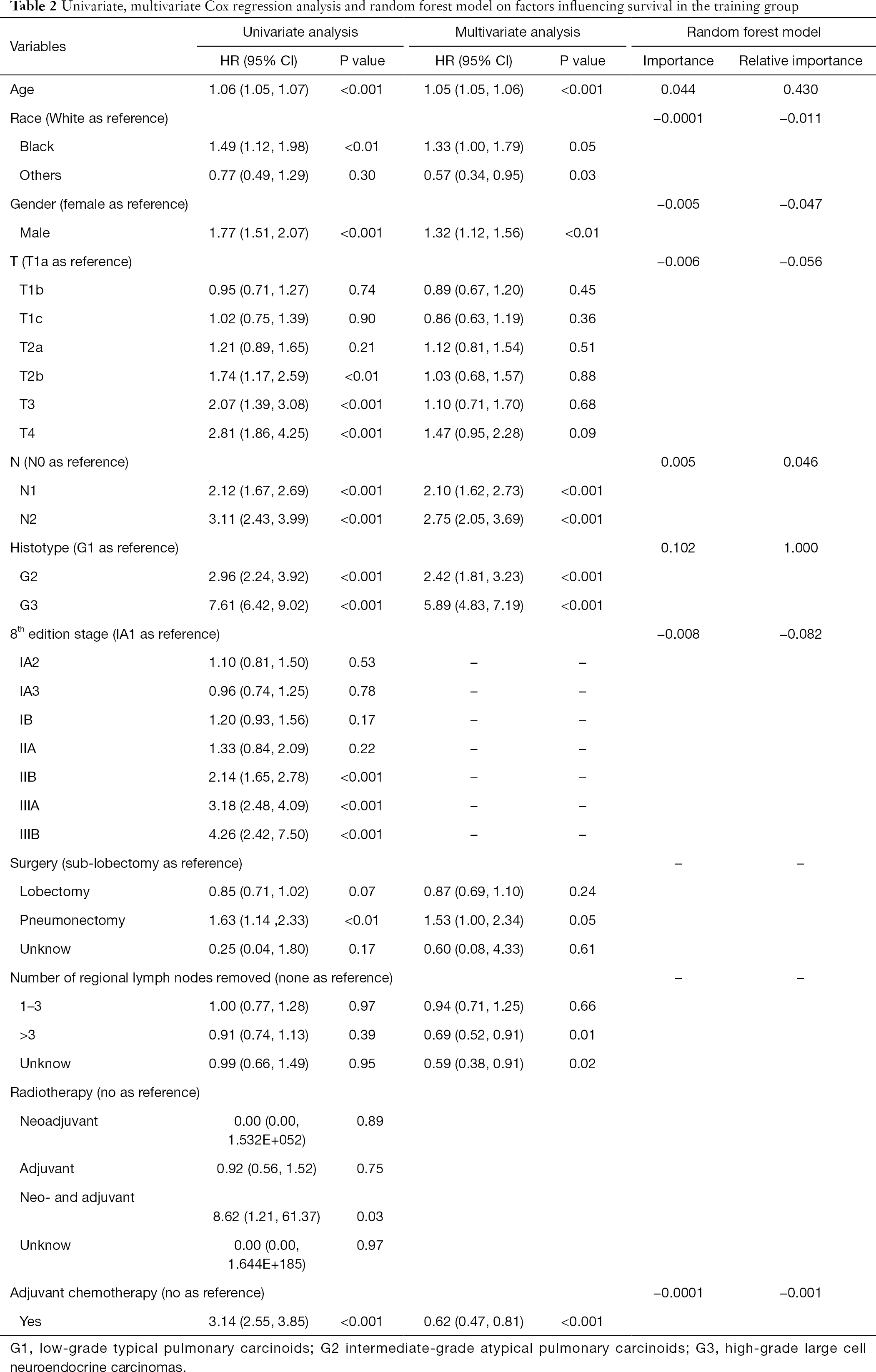 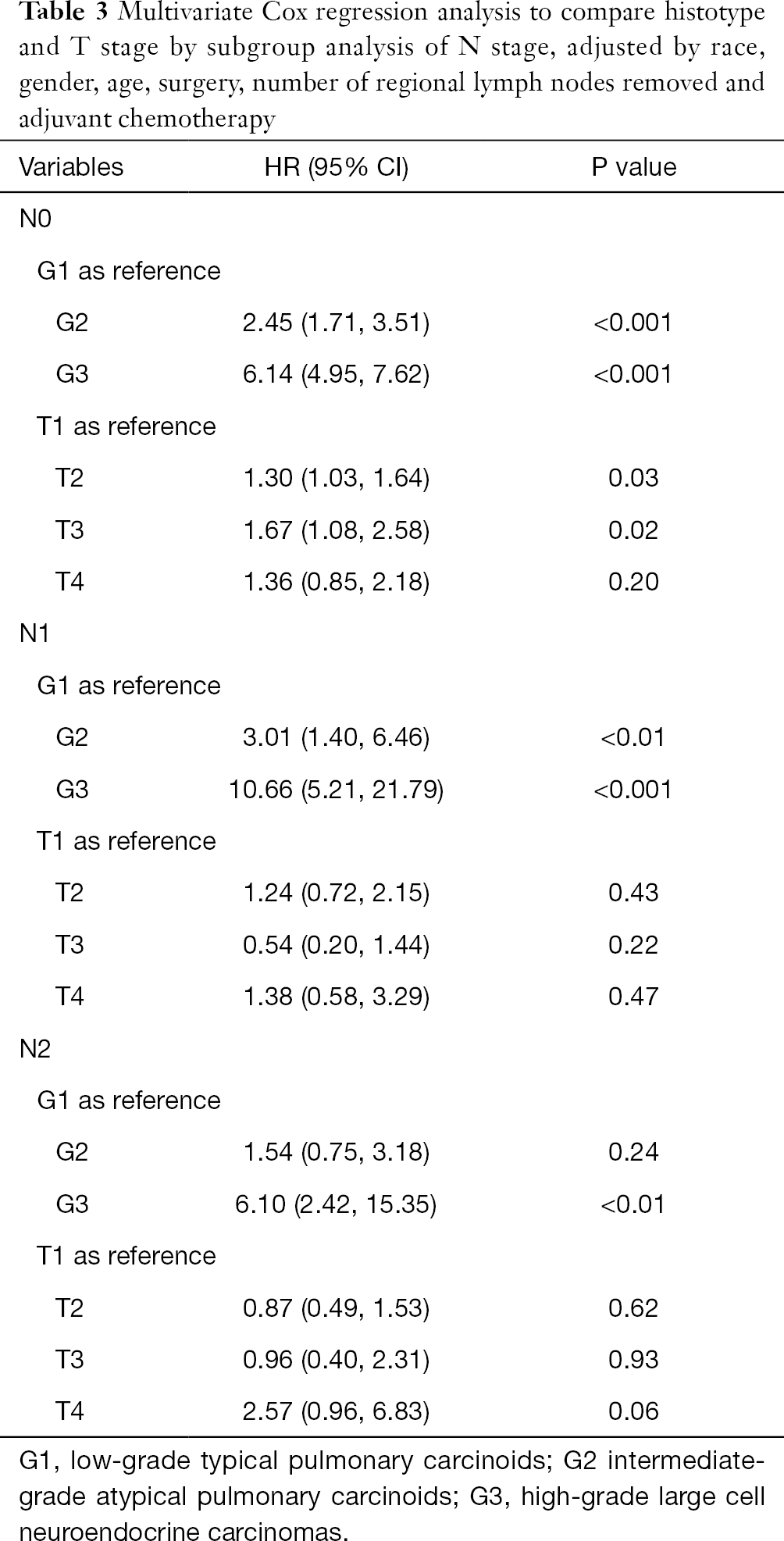 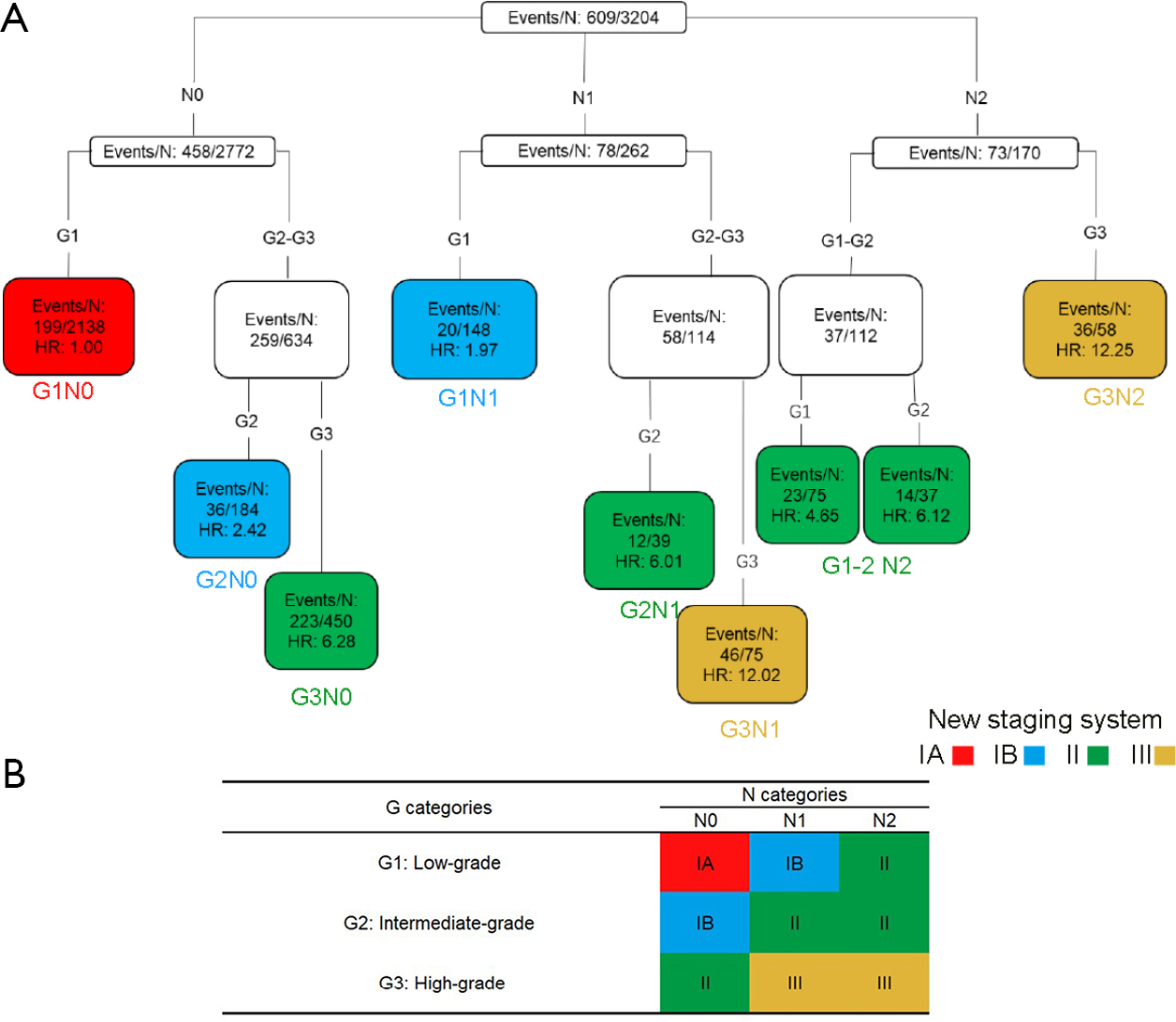 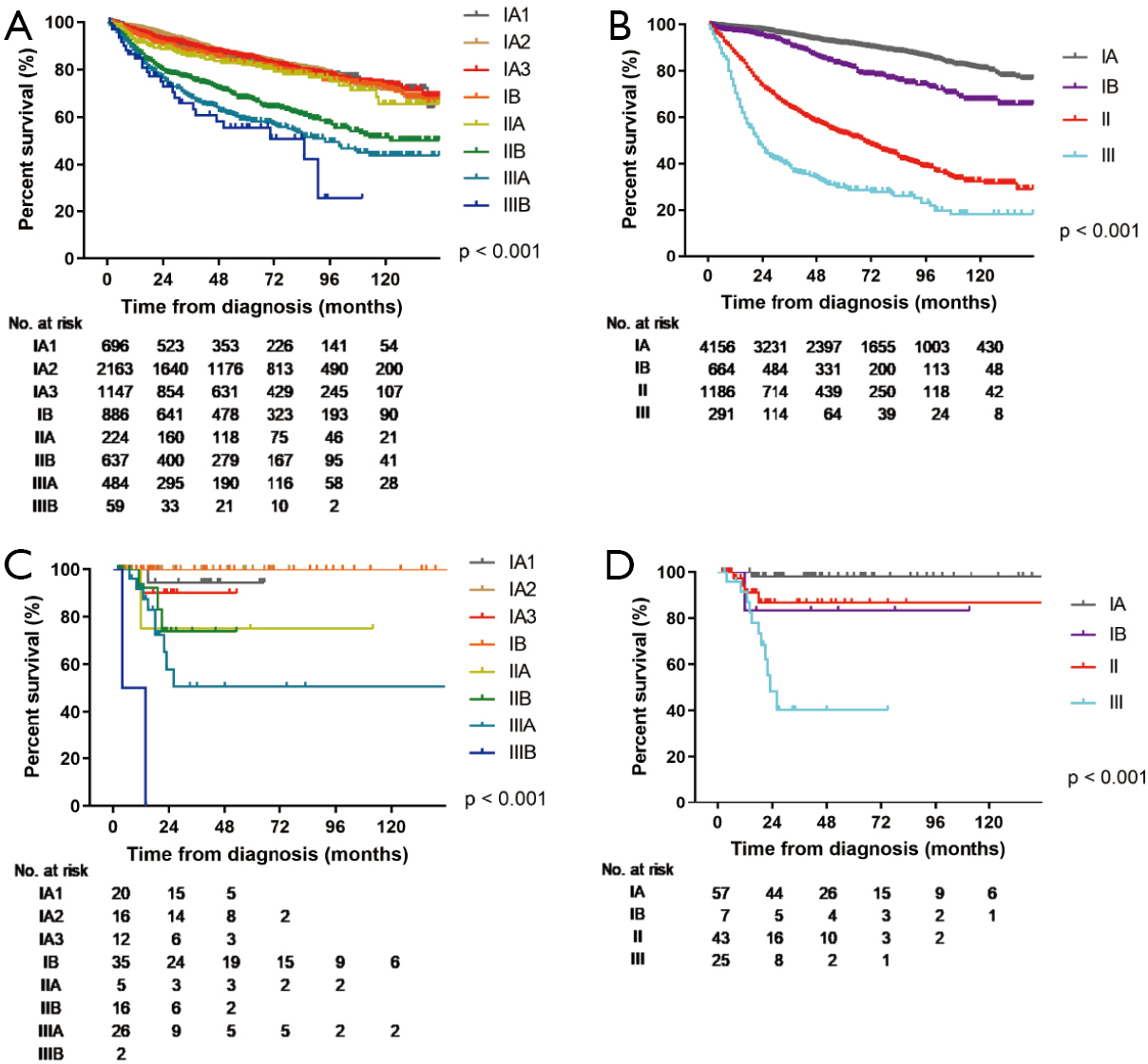 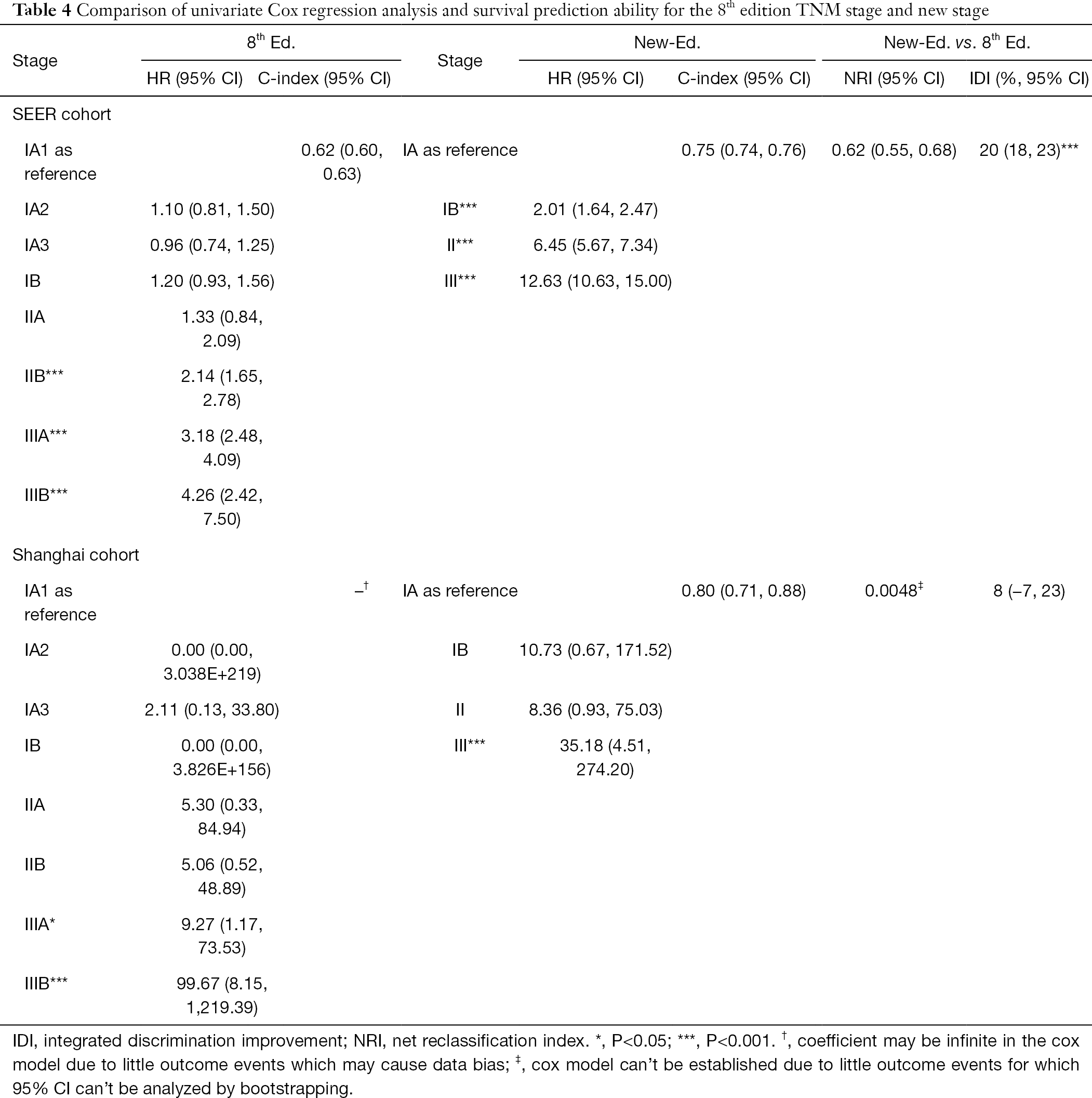 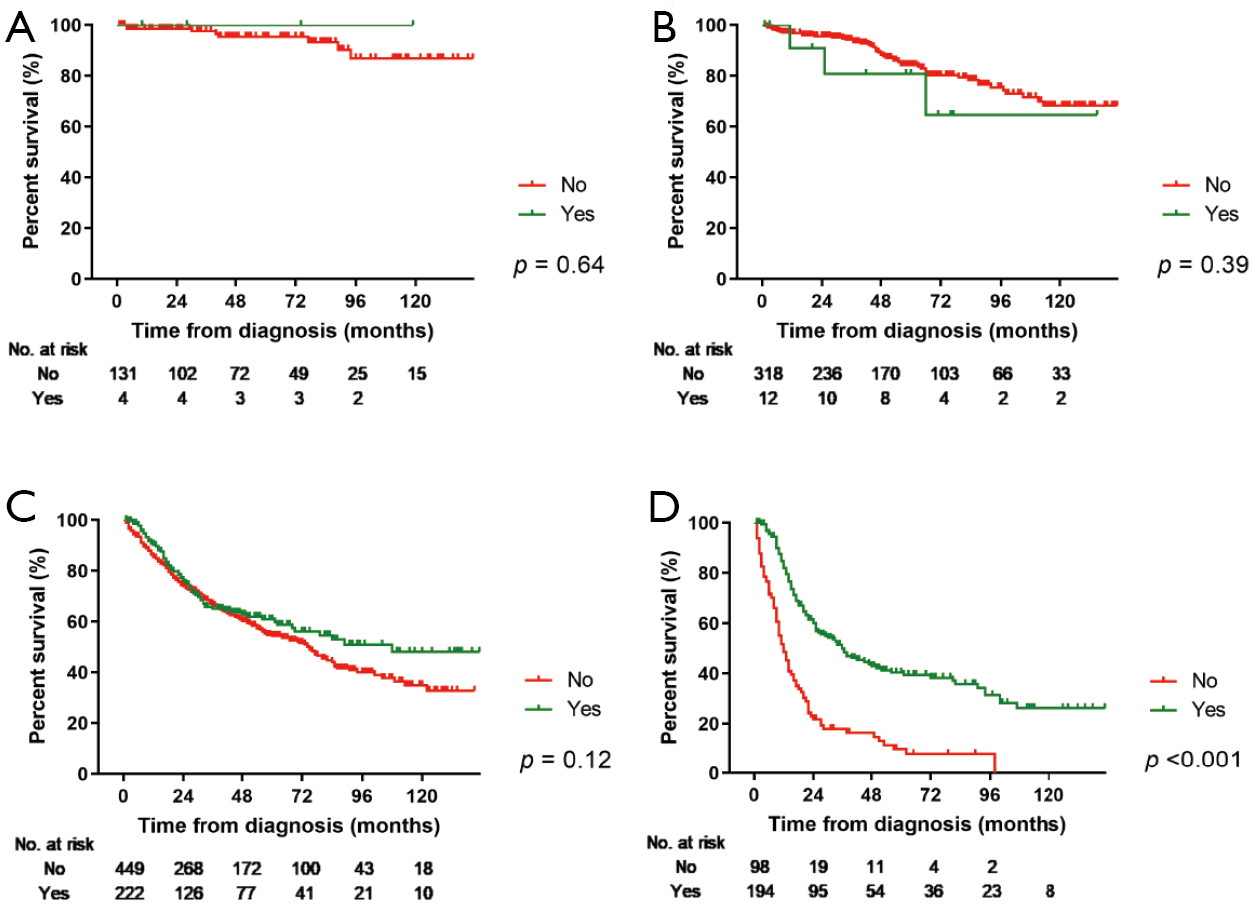 Figure 3 Overall survival by adjuvant chemotherapy according to the new staging system. (A) Stage IA, (B) stage IB, (C) stage II, and (D) stage III in the SEER cohort. 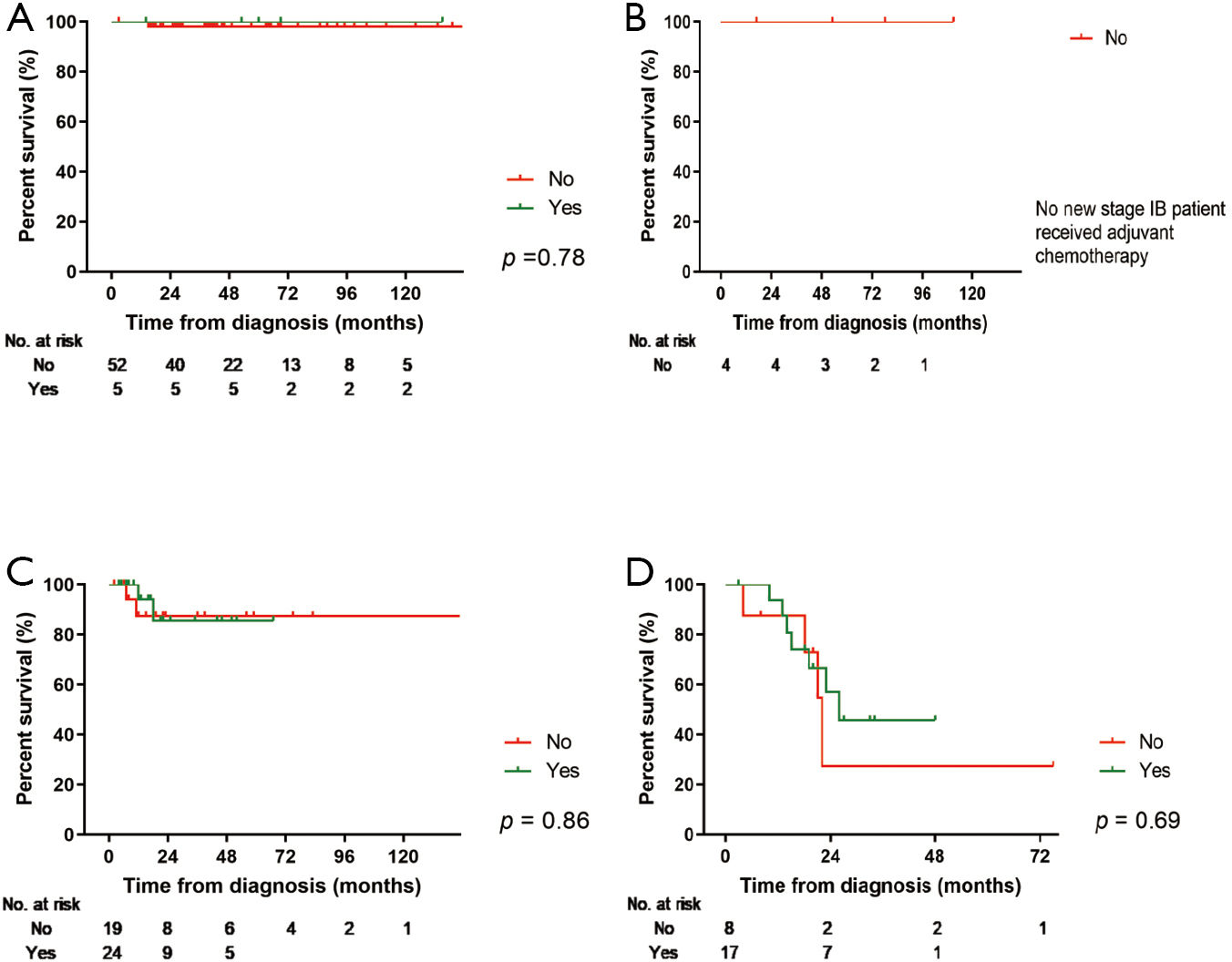 Figure 4 Overall survival by adjuvant chemotherapy according to the new staging system. (A) Stage IA, (B) stage IB, (C) stage II, and (D) stage III in the Shanghai cohort. 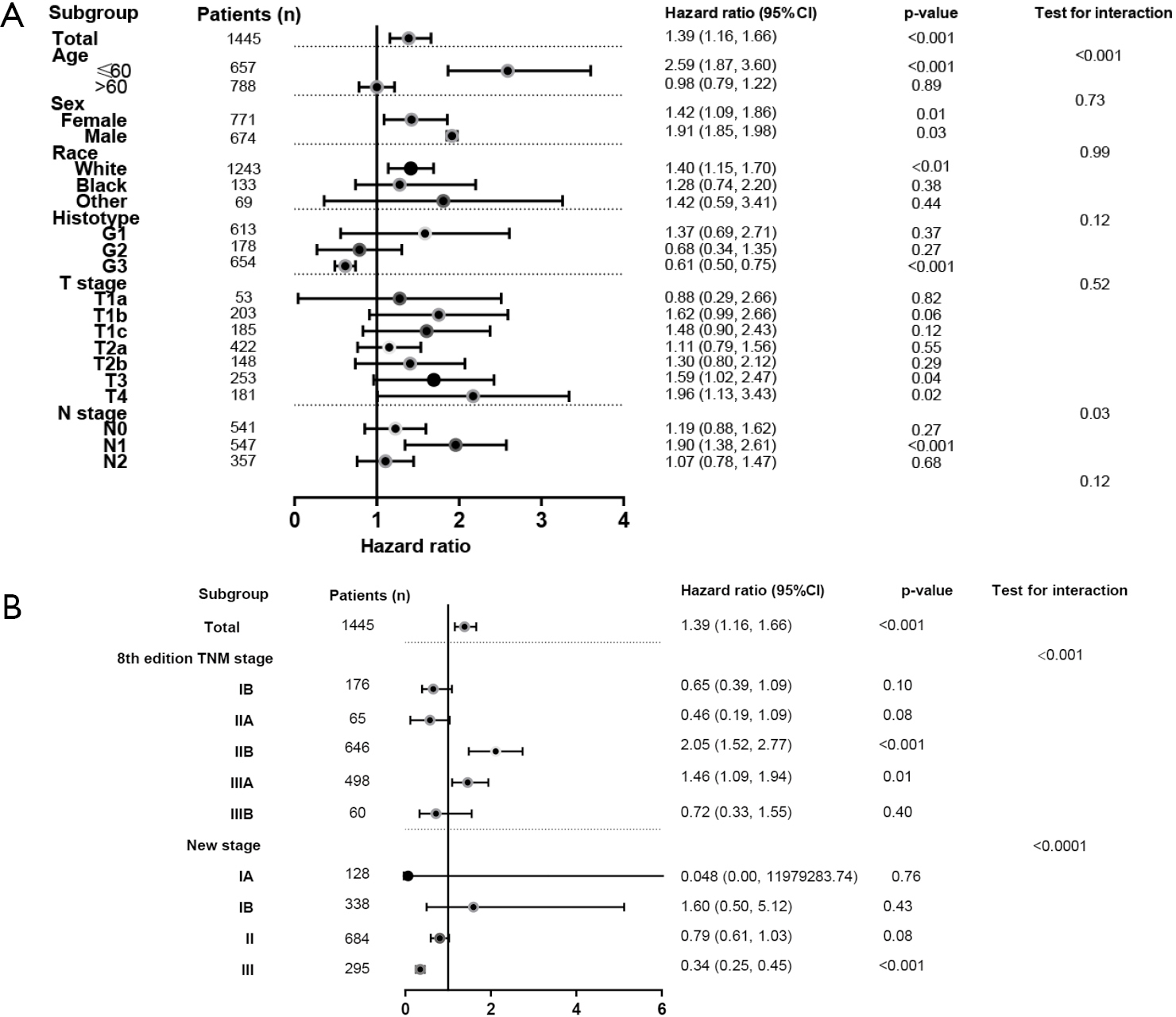 In this large-sample retrospective study of NETL, we explored factors associated with prognosis in patients with NETL. NETL histotype had a better survival predictive ability than the T stage. Therefore, we developed a new pathological staging system based on histotype and nodal status for NETL, which showed a better discriminative ability in the SEER and Shanghai cohorts. In addition, the new system had the potential to identify patients suitable for adjuvant chemotherapy, while the benefit conferred by adjuvant chemotherapy was not associated with the TNM stage.

The importance of specific staging systems for NETL has been realized recently. Several reports have shown an overlapping survival of patients with NETL in stages I and II (11,12). Tumor histotype and differentiation are crucial determinants of the clinical behavior of NETL. Corroborating a study by Skuladottir et al. (13), we found that NETL histotype was a significant prognostic factor of NETL. As for the N stage, many studies have pointed out that nodal invasion obviously influences NETL prognosis and is related to poor outcome (12,14,15). In line with these previous findings, the present study showed that nodal stage still had the potential to predict prognosis and constituted an independent factor for patient survival.

Although Jackson et al. (6) explored a staging system for NETL including histotype, N- and T-stage, there was no significant improvement in its ability of prognostic discrimination compared to the new staging system developed in this work (NRI =0.03, 95% CI: <−0.01 to 0.38; IDI =−0.6%, 95% CI: −1.7% to 0.7%; Table S2). This supported our results that the T stage had no good prognostic discrimination in NETL. Moreover, histotype showed a good survival discrimination in non-surgical patients, while T-stage did not (Figure S5). Given the practicality of the staging system, it is reasonable to replace the T stage with NETL histotype.

The pathological stage is important not only for predicting prognosis but also for advising postoperative treatment. However, there is no consensus regarding adjuvant therapy in NETL. For large-cell neuroendocrine carcinomas, adjuvant chemotherapy after surgery appears promising for the improvement of prognosis (18). In this study, adjuvant chemotherapy showed no survival benefit in various TNM stages, but the new system could select appropriate patients (new stage III) who might achieve survival benefit after adjuvant chemotherapy. Moreover, by subgroup analysis, we observed no association of chemotherapy effect with T stage; however, survival advantage was noted in G3 patients administered adjuvant chemotherapy. Taken together, replacing the T stage with histotype may help redefine prognostication and would have great potential for advising postoperative treatment in patients with these tumors.

The limitations of the current study include its retrospective nature, with the inherent trend of selection bias. Secondly, detailed data about diaphragm invasion, positive margins, mitotic rate and Ki-67 were not recorded in the SEER database, all of which are reportedly associated with survival. Furthermore, this study only included M0 postoperative patients. Therefore, the proposed staging system needs to be explored for stage N3 or M1 patients with NETL. Finally, even though the new staging system has been verified in the Shanghai cohort, the lack of data (especially for G2 patients, adjuvant chemotherapy and hormonal or targeted therapy) and the effect of different eras (2004–2015 and 2009–2018 for the SEER and Shanghai cohorts, respectively), which has implications on the variation of diagnostic and therapeutic options available, could cause bias. Therefore, the new staging system for NETL still needs more external validation and detailed data in an independent cohort before its clinical application.

Reporting Checklist: The authors have completed the STROBE reporting checklist. Available at http://dx.doi.org/10.21037/atm-20-5910

Conflicts of Interest: All authors have completed the ICMJE uniform disclosure form (available at: http://dx.doi.org/10.21037/atm-20-5910). The authors have no conflicts of interest to declare.