Ovarian cancer has the highest mortality rate of all female reproductive system cancers (1-4). Due to its insidious onset, most patients are diagnosed at an advanced stage. Patients with advanced ovarian cancer often have extensive intraperitoneal metastasis that cannot be treated by surgery, resulting in tumor recurrence and death (5-8). Therefore, the aim of the present study was to elucidate the mechanism of ovarian cancer in order to determine the most effective therapy for its treatment.

Death-associated protein apoptotic kinase 2 (DRAK2); also known as serine/threonine kinase 17B (STK17B) is a threonine/serine kinase, a member of the family of death-related protein kinases, and a positive regulator of apoptosis (9). The MYB (v-myb avian myeloblastosis viral) oncogene represses DRAK2 expression to suppress apoptosis in acute myeloid leukemia cells (10). The downregulation of STK17B in TRAIL-R1 mAb-sensitive cells upregulates Bcl-2 expression and restrains TRAIL-R1 mAb-induced apoptosis (11). DRAK2 is located a 2q32.3 deletion that was discovered by Sanjo et al. in 1998 (12). In recent years, STK17B has been found to be significantly upregulated in a variety of malignant tumors. For example, STK17B promotes carcinogenesis and metastasis in hepatocellular carcinoma (13). The aberrant expression of DRAK2 promotes tumorigenic potential by downregulating transforming growth factor-β1 activity (14). STK17B could be a potential prognostic marker and therapeutic target in multiple myeloma patients (15).

Studies have found that epithelial mesenchymal transition (EMT) is involved in the development of tumors and promotes the migration of cancer cells (16-18).

In ovarian cancer, STK17B expression is significantly increased. Western bolt showed that STK17B increased the invasion and migration of ovarian cancer cell by promoting the EMT process. We present the following article in accordance with the ARRIVE reporting checklist (available at http://dx.doi.org/10.21037/atm-21-601).

A total of 35 pairs of ovarian cancer samples were obtained from patients who had undergone ovariectomy. The study was approved by the Ethical Committee of The Affiliated Wuxi Maternity and Child Health Care Hospital of Nanjing Medical University (No. 2014-06-0120-06). All patients provided signed informed consent. The study was conducted in accordance with the Declaration of Helsinki (as revised in 2013).

SKOV3 and OV8 were obtained from the Institute of Cell Biology, Chinese Academy of Sciences in Shanghai. They were incubated in RPMI-1640 with 100 μg/mL streptomycin, 100 U/mL penicillin (Hyclone, Logan, UT, USA) and 10% fetal bovine serum (FBS). All cells were maintained at 37 °C in 5% CO2 in an incubator.

Ovarian cancer cell proliferation was assessed by Cell Counting Kit-8 (CCK-8) (Beyotime, Shanghai, China) and 5-ethynyl-20-deoxyuridine (EdU; Beyotime, China). Cells were inoculated in 96-well plates after transfection. At 0, 24, 48, and 72 h, 10 μL CCK-8 solution was added to each well. Cells were then cultured for a further 1–2 h. The optical density of the cells at a 450-nm wavelength was measured. The EdU trial was played out according to the introduction.

Ovarian cancer cell migration was evaluated by the wound healing assay. Cells were cultivated in 6-well plates after 48 h of transfection with STK17B siRNA. 90% confluence was obtained before transfection. A clean line in the middle of 6-well plates by 200-μL sterilization pet tips, then washed the floating cells with PBS. Finally, the travel distances were taken pictures at 0 and 24 h in order to estimate the ability of cell wound healing.

Cell invasion was detected by transwell chambers and Matrigel (Corning, USA). 100 μL (5×104) Serum-free medium contained cells were added into the upper chamber coated with Matrigel, and 500 μL Dulbecco’s modified Eagle’s medium containing 20% FBS was added to the bottom chamber. After 48 h, cells in the upper chamber were removed, and cells in the lower membrane were stained with 0.1% crystal violet. Invaded cells were counted under a microscope.

RIPA Lysis Buffer (Beyotime, China) with protease inhibitors was used to lyse cells for total protein extraction. After denaturation, the protein samples were separated with 10% sodium dodecylsulfate-polyacrylamide gel electrophoresis and transferred to a polyvinylidene difluoride membrane (Millipore, USA). After being blocked with 5% skim milk, the membrane, together with the primary antibodies, including STK17B, E-Cadherin, N-Cadherin, Vimentin, Twist, Slug, Snail., were incubated at 4 °C for 14–16 h. Above primary antibodies were then rinsed 3 times with TBST and incubated with anti-mouse or anti-rabbit horseradish peroxidase-coupled secondary antibodies for 1 h at room temperature. They were then rinsed 3 times with TBST. An electrochemical luminescence kit (Beyotime, China) was used to visualize the protein bands.

In the present study, we used 5–6-week-old, weight 18–22 g, female BALB/c nude mice to research xenograft in vivo. OV8-LV-shNC and OV8-LV-shSTK17B cells (5×106) were injected into each mouse. Tumor growth was detected every 5 days. Subcutaneous tumor weights were detected after the mice were killed. Experiments were performed under a project license (GB/T 35,892-2018) granted by the Ethics Committee of Soochow University, in compliance with “Laboratory animal—Guideline for ethical review of animal welfare” for the care and use of animals.

Every assay was executed in triplicate. T-test or χ2-test was used to analyze every experimental assay. P<0.05 was considered to be statistically significant. SPSS version 20.0 (IBM, Armonk, NY, USA) software was used for the statistical analyses.

STK17B expression was increased 2.429-folds in the carcinoma specimens (P<0.05) (Figure 1A,B). Our findings indicated that STK17B could act as the oncogene in ovarian cancer. 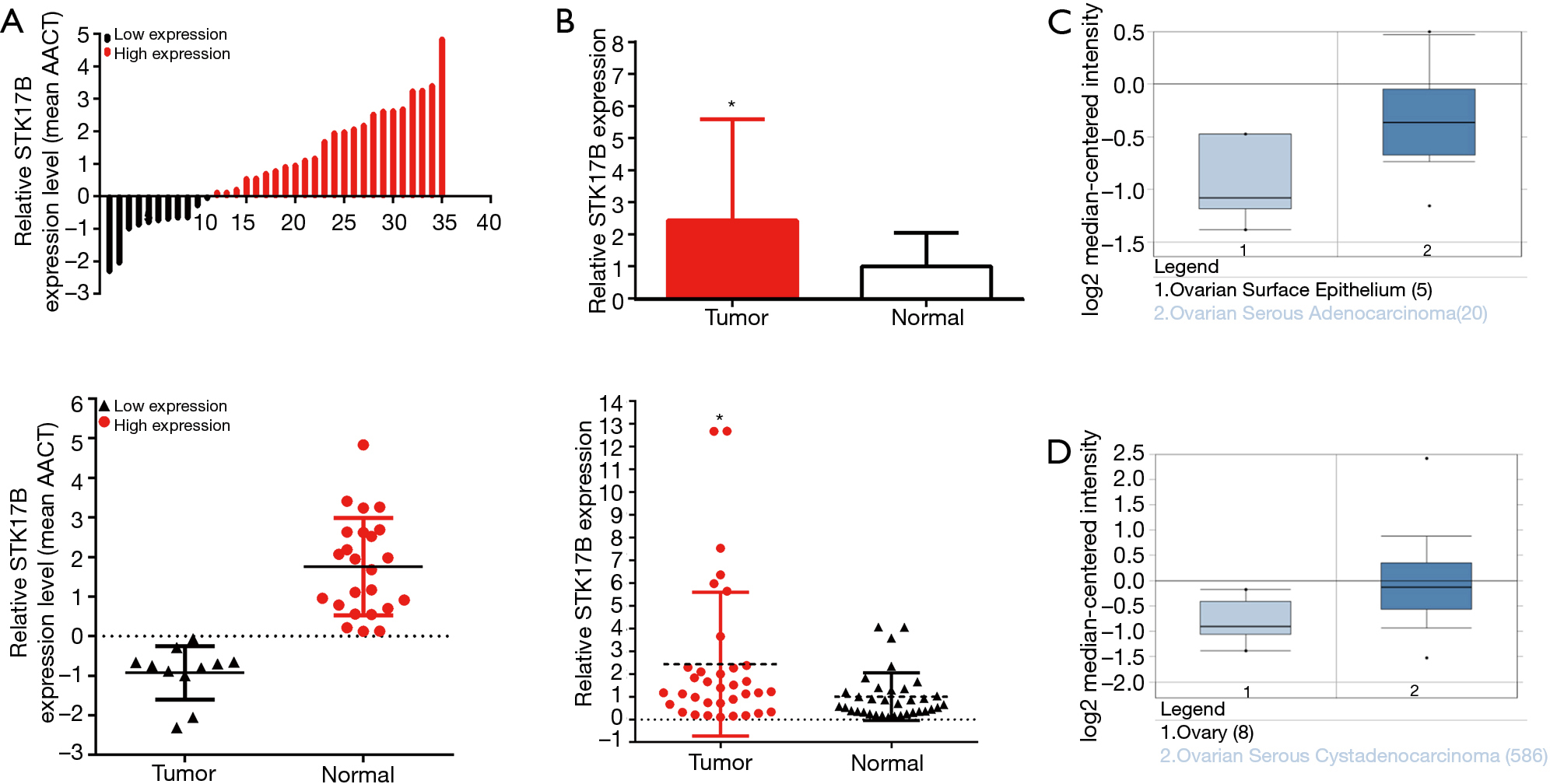 STK17B acts as the oncogene in ovarian cancer, and knockdown of STK17B restrains cell progression

Figure 2 Knockdown of STK17B suppresses ovarian cancer cells progression. STK17B expression level was downregulated by si-STK17B (A). Cell Counting Kit-8 (B) and 5-ethynyl-20-deoxyuridine (×20) (C) assays were detected by si-STK17B. Migration was detected after transfection si-STK17B (×4) (D). Placed the transwell chamber in methanol for fixation for 10 minutes, taken out the transwell chamber, soaked in 0.5% crystal violet (dissolved in methanol), and stained for 15 minutes, transwell assay was detected for migration and invasion after transfection of si-STK17B (×10) (E,F). *P<0.05, **P<0.01.

The relative invasion ratio in the pcDNA3.1-STK17B group was increased 2.425-fold in SKOV3 (P<0.001) and upregulated 2.374-fold in OV8 (P<0.001) by transwell assay (Figure 3F), demonstrating that the overexpression of STK17B promoted ovarian cancer migration.

Downregulation of STK17B suppressed ovarian cancer tumorigenicity in vivo (Figure 4A,B,C,D,E). Tumors collected from mice were shown in Figure 4A. Knockdown of STK17B was downregulated in vivo (Figure 4B). Tumor growth of the LV-NC treatment group was quicker than that of the LV-STK17B group (Figure 4C). Tumor weight was less in the LV-STK17B group (Figure 4D). STK17B downregulation decreased Ki-67 and STK17B expression (Figure 4E). These findings demonstrated that STK17B promotes ovarian cancer cell tumorigenicity in vivo. 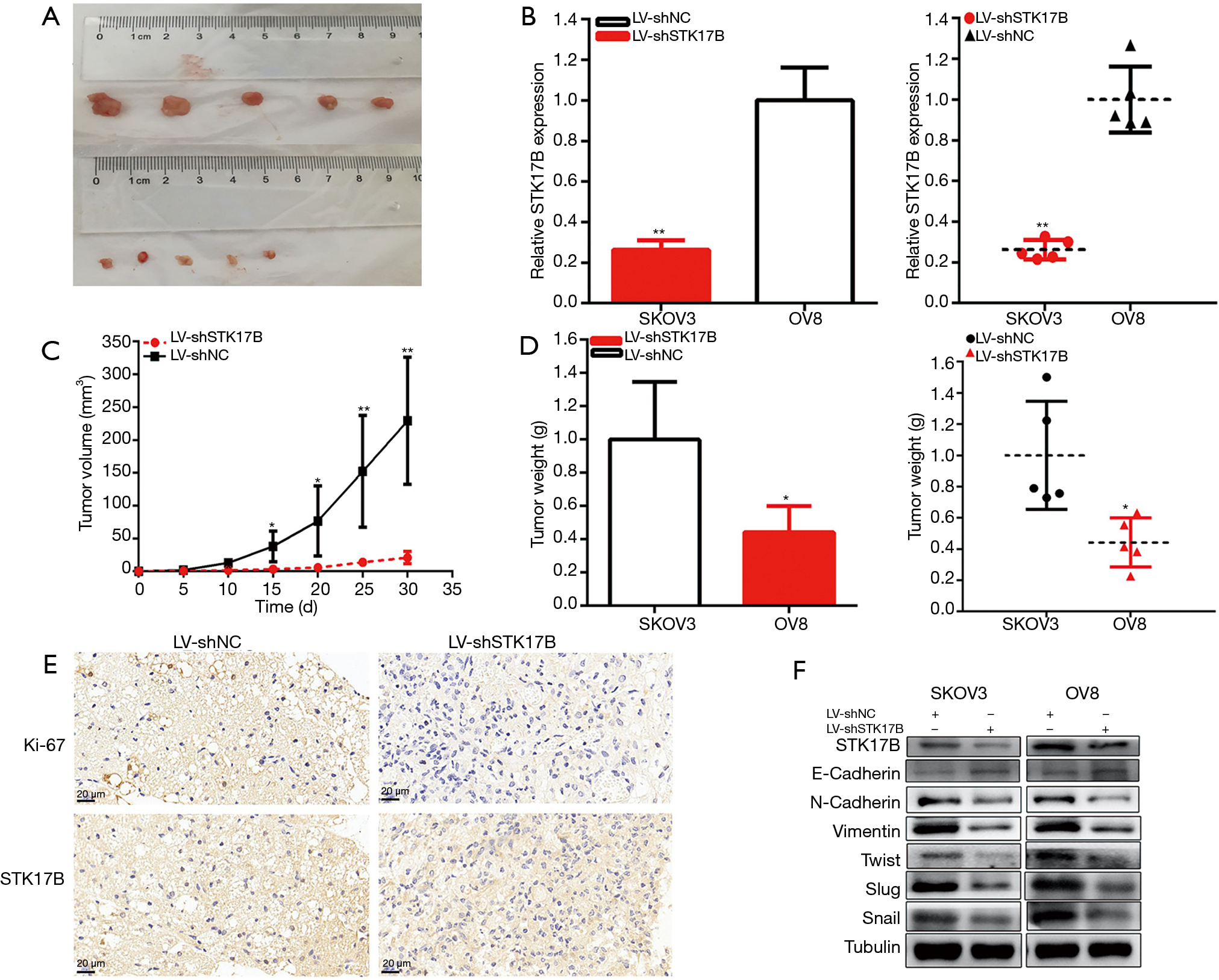 STK17B is involved in the EMT of ovarian cancer

The STK17B gene, also known as DRAK2, belongs to the DAPK (death-associated protein kinase) family (19,20). STK17B is increased in basal-like and HER2-enriched breast cancer, while in a xenograft model, the absence of STK17B was found to inhibit tumor development and tumor growth (13). STK17B was highly expressed in cutaneous T-cell lymphoma (21), and was overexpressed in hepatocellular carcinoma (HCC) tissues (22). STK17B may promote tumor progression. However, the role of STK17B in various tumors is controversial. Some studies have found that STK17B could act as a tumor suppressor in leukemia and colorectal cancer (10,22), and STK17B has been found to play a dual function in tumor progression (9,23). The role of STK17B is disease or cell dependent; previously published studies have indicated that STK17B is upregulated in most HCC tissues and can stimulate HCC cell proliferation and metastasis in vivo and in vitro (12,21). STK17B could also inhibit the expression of epithelial cells by regulating the AKT/GSK-3β/Snail signaling pathway, increase the expression of interstitial cells (N-cadherin and vimentin), and promote EMT and tumorigenesis (12). It has been found that upregulation of STK17B is related to clinicopathological characteristics such as tumor size, TNM stage, and venous invasion (12). In the present study, we studied the role of STK17B and its underlying mechanism in ovarian cancer. STK17B expression was found to be upregulated in ovarian cancer tissues compared with normal ovarian tissue, which indicates that STK17B may be involved in cancer procession Our study in functional experiments have shown that STK17B silencing suppresses ovarian cancer cell proliferation, migration, and invasion, and the overexpression of STK17B promotes proliferation, migration, and invasion. We observed that STK17B was significantly tumorigenic compared with the control group in vivo. Therefore, we believe that STK17B acts as a significant tumor regulator and potential therapeutic target in ovarian cancer. Our results are consistent with the differential expression of ovarian cancer in the TCGA.

EMT is critical in the progression of metastasis in multiple cancers (24,25); therefore, in the present study, we tried to verify whether STK17B participates in the EMT of ovarian cancer. In the Western blot results, we found that when STK17B was silenced, key proteins in EMT that modulates E-cadherin was upregulated and N-cadherin was downregulated. The Twist, Slug, and Snail transcription factors decreased in EMT. Therefore, we believe that STK17B may be involved in the progression of ovarian cancer by promoting EMT. However, we need to verify EMT signaling pathway in future studies.

The authors are grateful to the donors who participated in this program.

Reporting Checklist: The authors have completed the ARRIVE reporting checklist. Available at http://dx.doi.org/10.21037/atm-21-601

Conflicts of Interest: All authors have completed the ICMJE uniform disclosure form (available at http://dx.doi.org/10.21037/atm-21-601). The authors have no conflicts of interest to declare.

Ethical Statement: The authors are accountable for all aspects of the work in ensuring that questions related to the accuracy or integrity of any part of the work are appropriately investigated and resolved. The study was approved by the Ethical Committee of The Affiliated Wuxi Maternity and Child Health Care Hospital of Nanjing Medical University (No. 2014-06-0120-06). All patients provided signed informed consent. The study was conducted in accordance with the Declaration of Helsinki (as revised in 2013). Experiments were performed under a project license (GB/T 35,892-2018) granted by the Ethics Committee of Soochow University, in compliance with “Laboratory animal—Guideline for ethical review of animal welfare” for the care and use of animals.