Hospitalization records of patients receiving maintenance dialysis who were discharged from hospital during 2015 were identified within the China Health Insurance Research Association (CHIRA) database using International Classification of Disease revision 10 (ICD-10) codes (i.e., N18.000, N18.001, and N18.900) and items of medical service claim, including hemodialyzer and PD fluid (15). The CHIRA database is a repository of claims from individuals covered by UBHI. It uses a two-stage sampling design to create a national sample of claims. It contains inpatient and outpatient whole-year medical records, and includes data on patient demographics, medical events, operation procedures, prescription drugs, and detailed medical expenditure. The CHIRA database has been described in detail previously (10).

All eligible patients included in the study were aged >18 years and were discharged after index hospitalization between January 1st, 2015 and December 31st, 2015. Patients with maintenance HD and maintenance PD were defined as having maintenance dialysis. All patients who did not receive dialysis were excluded. We also excluded patients with acute kidney failure and those with a history of kidney transplantation. Patients hospitalized without a recorded admission or discharge date, those with a length of stay >1 but <3 days, or >180 days were also excluded (14). The flow chart of patient selection is shown in Figure 1. The study was conducted in accordance with the Declaration of Helsinki (as revised in 2013). The study was approved by the Ethics Committee of Peking University First Hospital (approval number: 2018-25), and informed consent from patients was not required due to the secondary use of deidentified patient data and identifiable personal information not being used. The procedure was performed in accordance with all relevant guidelines and regulations. 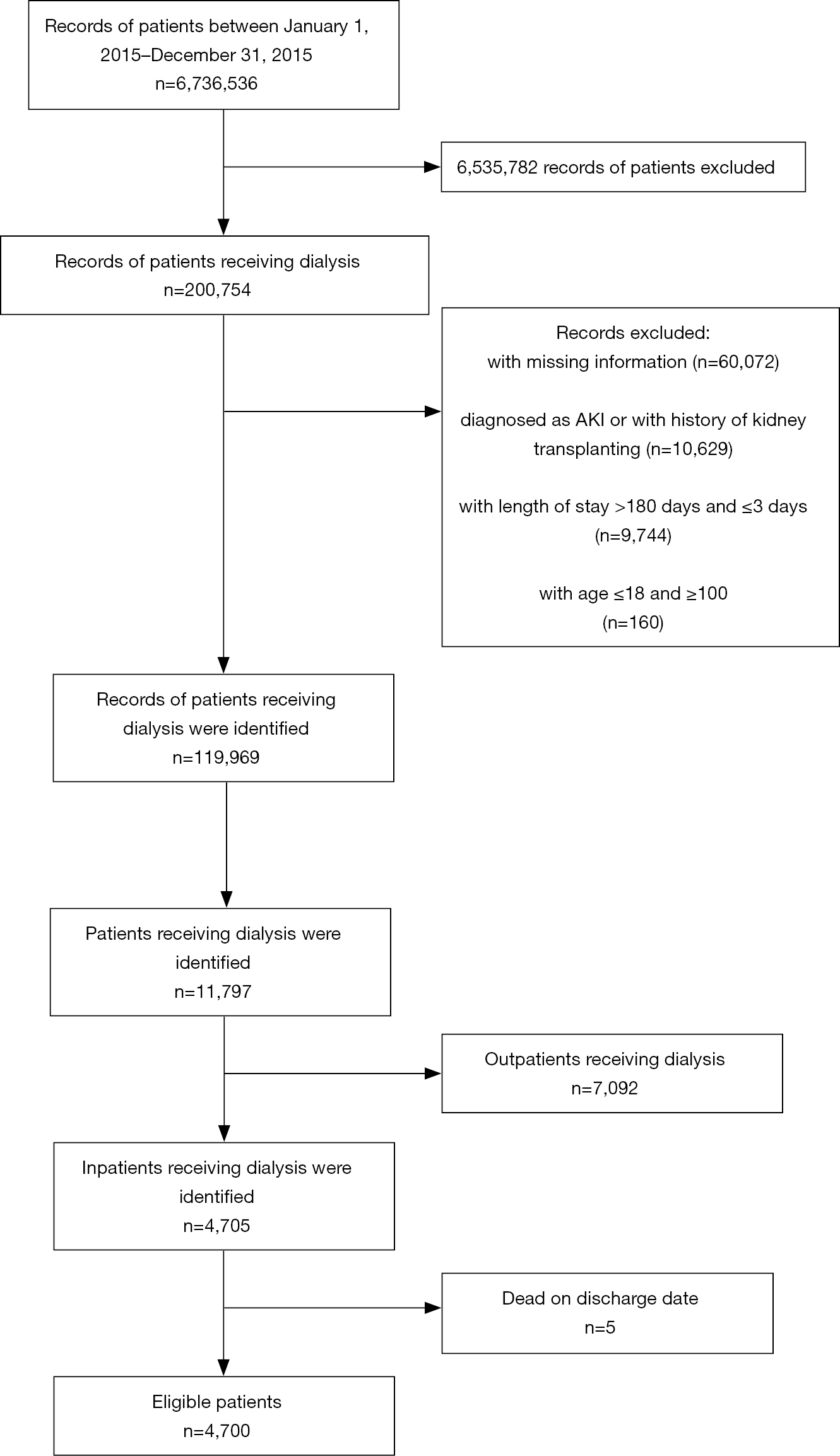 We employed covariate adjustment using propensity scores (PS). PS are the estimated probability of having CVD based on all relevant confounding variables using a logistic regression model (17). To balance the effect of comorbidities and reduce the degrees of freedom, we reduced each of the comorbidities associated with CVD to a PS to adjust for the effect of related covariates (18). For each patient, we calculated the PS for comorbidities with a logistic regression model using the variables listed in Table 1. Variables were selected using previous studies of plausible associations between comorbidities and outcome. PS were used to adjust for potential confounders in the multivariable models that assessed the association between CVDs and 30-day hospital readmission. 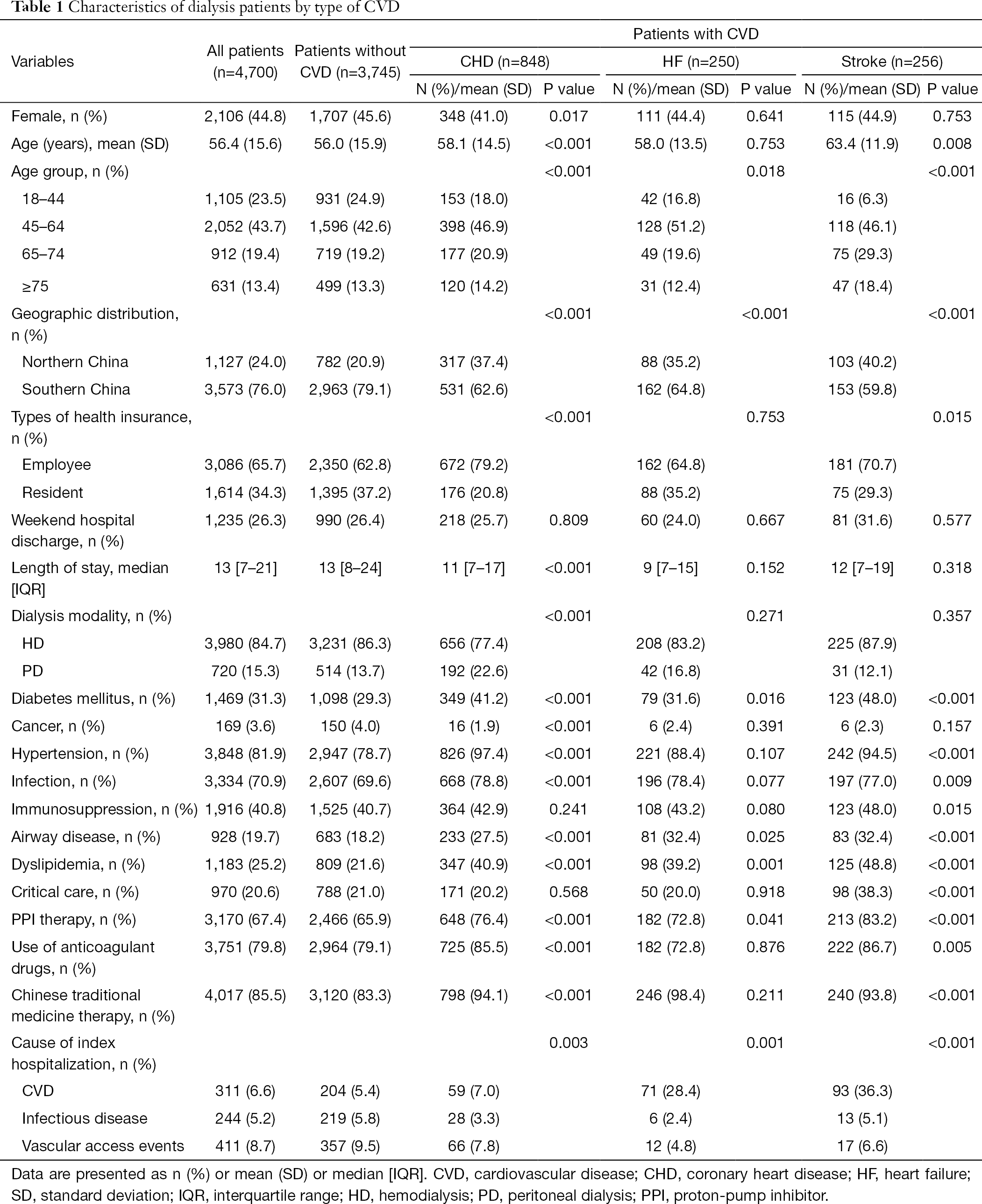 Characteristics of dialysis patients were exemplified using descriptive statistics. Continuous variables were expressed as means (± standard deviations) or medians (25th and 75th percentiles), and categorical variables as proportions (%). To compare the distribution of groups, the t-test, analysis of variance, or the Wilcoxon rank-sum test was used for continuous variables, and the χ2-test was used for categorical variables.

Comparison among patients with different types of CVDs 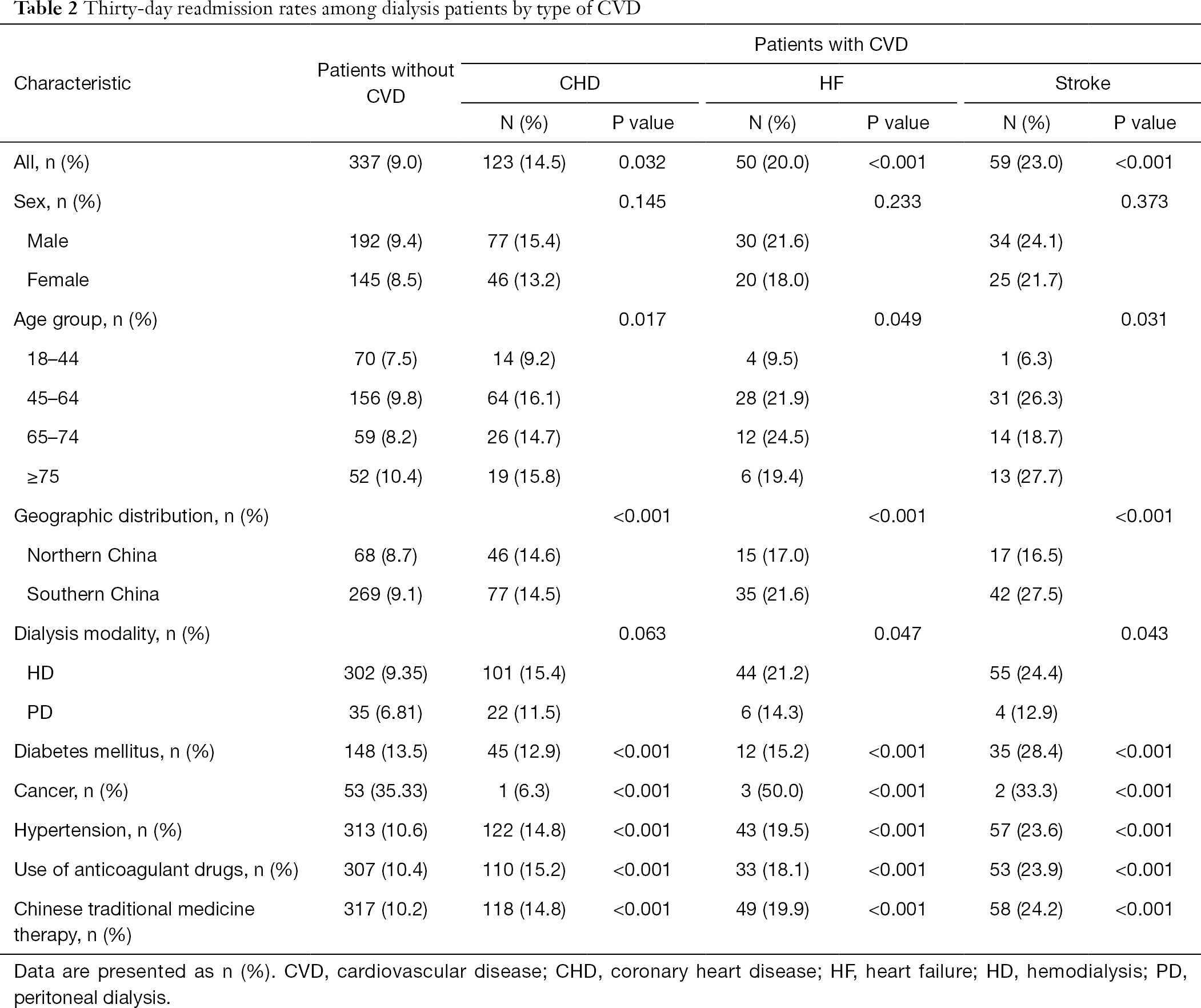 CVD and the risk of 30-day hospital readmission

Several potential mechanisms may underlie the correlation observed between CVD and increased risk of 30-day hospital readmission. First, CVD is associated with an increased likelihood of other chronic diseases, such as diabetes, pulmonary circulatory disease, and chronic obstructive pulmonary disease (19), and each disease serves as a potential cause of hospitalization (20). Second, sterile inflammation that occurs after stroke can result in atherosclerosis (21-24), which, as the main factor underlying most CVDs, can result in a new CVD (25). Third, with the progression of HF, anemia can arise due to iron deficiency (26), the use of angiotensin-converting enzyme (ACE) inhibitors (27), and increased hepcidin levels (28). Low hemoglobin levels serve as an independent factor of increased risk of hospital admission among dialysis patients (29). The potential biological mechanism underlying this phenomenon requires further study.

The main strength of the present study is that it evaluated 30-day hospital readmission risk among dialysis patients with control for various potential confounding variables. However, our study also has limitations. First, similar to other studies using administrative databases, claims data may contain potential errors due to the misclassification of patients. Despite this, claims data, being real-world data, are widely-used due to their authenticity. In addition to diagnosis, we used operation procedures, prescription drugs, and detailed medical expenditure to confirm patients’ conditions. Second, most patients were HD patients. Third, we did not include laboratory results, dialysis age, vascular access procedures in HD patients, outpatient dialysis unit, PD subtype, severity of comorbidity, or other unmeasured confounders. Fourth, we did not include information about out-of-hospital deaths, which is a competing risk for hospital readmission. Fifth, we did not validate our conclusion in patients with different CHD types, and differences in the type of CHD may result in variation in prognostic outcomes. Finally, the patients in our study were beneficiaries covered by UBHI. Despite the wide coverage of UBHI in China, this raises the question of how representative our study population is.

CVDs, especially stroke and HF, are independent predictors of 30-day hospital readmission in Chinese patients receiving dialysis. Our findings indicate an association between CVD and 30-day hospital readmission, which may prove to be important in guiding interventions to improve quality of care. By improving medical care for CVD, the healthcare system can potentially improve outcomes and significantly reduce healthcare costs. Further intervention studies seeking to improve CVD care quality are required.

Reporting Checklist: The authors have completed the STROBE reporting checklist. Available at http://dx.doi.org/10.21037/atm-20-2367

Conflicts of Interest: All authors have completed the ICMJE uniform disclosure form (available at http://dx.doi.org/10.21037/atm-20-2367). RC, CY, HC, JW, BG, LL, YJ, YL, JW, GK, FW, LZ, and M Zhao report grants from the National Natural Science Foundation of China, Peking University, the Ministry of Science and Technology of the People’s Republic of China, the University of Michigan Health System-Peking University Health Science Center Joint Institute for Translational and Clinical Research, and Peking University First Hospital. The other author has no conflicts of interest to declare.

Ethical Statement: The authors are accountable for all aspects of the work in ensuring that questions related to the accuracy or integrity of any part of the work are appropriately investigated and resolved. The study was conducted in accordance with the Declaration of Helsinki (as revised in 2013). The study was approved by The Ethics Committee of Peking University First Hospital (No. 2018-25). Informed consent from patients was not required due to the secondary use of deidentified patient data and identifiable personal information not being used. The procedure was performed in accordance with all relevant guidelines and regulations.