Apelin receptor (APJ) is a member of the G protein-coupled receptor gene family (8). Although APJ is similar to angiotensin II type 1 receptor (AT1R) in structure, but it displays no affinity for angiotensin II (9). Apelin, a peptide with 77 amino, is identified as an endogenous ligand for the APJ (8). Apelin is processed to produce bioactive peptides consisting of 12, 13, 17 and 36 amino acids, which is called apelin-12, apelin-13, apelin-17 and apelin-36, respectively (10,11). Apelin-13 shows the highest biological activity among those forms (12). Apelin/APJ system plays important roles in the cardiovascular system under both normal and pathophysiological conditions (13-15). It is known that apelin promotes VSMC proliferation in normal or atherosclerotic animals (15-18). Apelin-13 and APJ in the paraventricular nucleus are involved in vasopressin release and sympathetic activation in spontaneously hypertensive rat (SHR) (19). However, the roles of peripheral vascular apelin/APJ system in VSMC proliferation in hypertension remain unknown.

Autophagy is a dynamic process that participates in cellular homeostasis by regulating cell survival and death (20). Intracellular organelles or proteins are delivered to lysosomes, which regulate cell survival through lysosome-mediated degradation (21). Hypertension and several vascular diseases are closely linked to autophagy dysfunction (22,23). Autophagy at a low level maintains homeostasis and provides energy and nutrients for cells through degradation of damaged organelles, while excessive autophagy damages cells and even causes cell death (24). Vascular autophagy is involved in physiological processes and some diseases relate to vascular structure and function (25). It has been found that AMPK activation prevents pulmonary arterial hypertension induced by monocrotaline via inhibiting NF-κB-mediated autophagy (26). TP53-induced glycolysis and apoptosis regulator attenuates VSMC autophagy of pulmonary artery to prevent pulmonary hypertension (27). However, the role of autophagy in VSMC proliferation and its relation to apelin/APJ system in hypertension are still not elucidated. The present study aims at determining the roles of apelin/APJ in autophagy and proliferation of VSMCs in Wistar-Kyoto rat (WKY) and SHR.

We present the following article in accordance with the ARRIVE reporting checklist (available at http://dx.doi.org/10.21037/atm-20-6891).

Experiments were designed according to the standards of the Guide for the Care and Use of Laboratory Animals published by the US National Institutes of Health (NIH, 8th edition, 2011). The surgical procedures and experimental protocol were approved by the Experimental Animal Care and Use Committee of Nanjing Medical University (No.: IACUC-1811017). SHR is widely used as a model of hypertension, and WKY, derived from the same ancestral Wistar rat as the SHR, is normotensive and used as the closest genetic control for the SHR. Male WKY (n=12) and SHR (n=12) aged at 9 weeks weighing 200250 g were purchased from Vital River Laboratory Animal Technology Co., Ltd. (Beijing, China). Systolic blood pressure (SBP) for SHR was higher than 150 mm Hg in the present study. Rats were exposed to a temperature-controlled room for a 12 h light/12 h dark cycle. The rats were randomly fed with a standard chow and tap water. Rat was euthanized at the end of experiments with intravenous injection of pentobarbital sodium (200 mg/kg).

VSMCs were isolated from thoracic aorta of WKY and SHR and cultured as we reported previously (5). Simply, the cells were cultured in DMEM containing 10% fetal bovine serum (FBS), 100 IU·mL−1 penicillin and 100 mg·mL−1 streptomycin in humidified containing 5% CO2 at 37 °C. VSMCs were identified with negative PECAM-1 (marker of endothelial cells) and vimentin (marker of fibroblasts), and positive α-SMA (marker of VSMCs). VSMCs from the 3rd to the 5th passages were used in the present study. The VSMCs were incubated 24 h after PBS or apelin-13 (1 µM, MedChem Express, Monmouth Junction, NJ, USA) treatments.

Immunohistochemistry was used to detect APJ and apelin expressions in aorta of WKY and SHR. The aorta was fixed in 4% paraformaldehyde, embedded in paraffin, and then cut into 10 µm sections. The deparaffinized and rehydrated sections were incubated with primary anti-APJ antibody (1:100) or anti-apelin antibody (1:100) overnight at 4 °C, and then incubated with horseradish peroxidase-conjugated goat anti-rabbit antibody.

VSMCs were grown on glass coverslips in 6-well plates and fixed with 4% paraformaldehyde for 20 min. The cells were rinsed with 1×PBS for three times and permeabilized with 0.1% Triton X-100 for 5 min. After blocking in 1% BSA at room temperature for 1 h, cells were incubated with microtube-associated protein-1 light chain-3B (LC3B) antibody (1:100) and α-SMA antibody (1:100) overnight. The cells were rinsed with 1×PBS and incubated with the secondary fluorescein anti-rabbit IgG (1:1,000) and anti-mouse IgG (1:1,000) for 1 h. The nuclei were stained with DAPI (Southern Biotech, Birmingham, AL, USA), a blue-fluorescent DNA stain.

Total protein was extracted from VSMCs and thoracic aorta respectively. Then, 30 μg total proteins were separated with SDS-PAGE and transferred to PVDF membrane. The membranes were blocked with 5% defatted milk in TBST, and then incubated with primary antibody overnight at 4 °C. The Enhanced Chemiluminescence Detection Kit (Thermo Fisher Scientific, USA) was used to visualize protein bands. All the antibodies used for immunofluorescent and Western blot analysis are listed in a table (Table S2).

Data are expressed as mean ± SE. Student’s unpaired t-test was used to compare the difference between two groups. One-way or two-way ANOVA followed by post hoc Bonferroni test was employed for multiple comparisons. Statistical significance was considered as P<0.05.

APJ and apelin expressions in the aorta and VSMCs 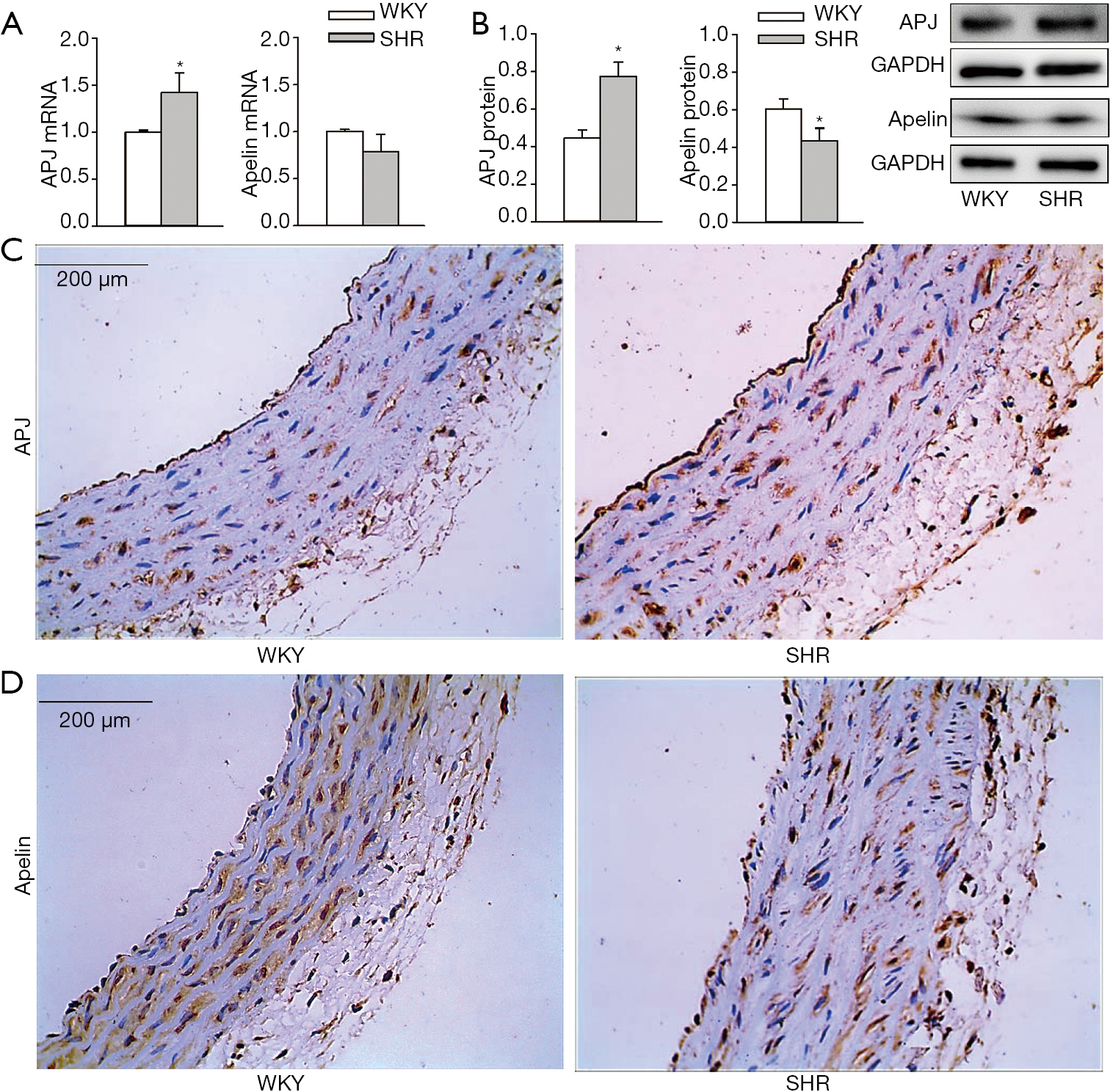 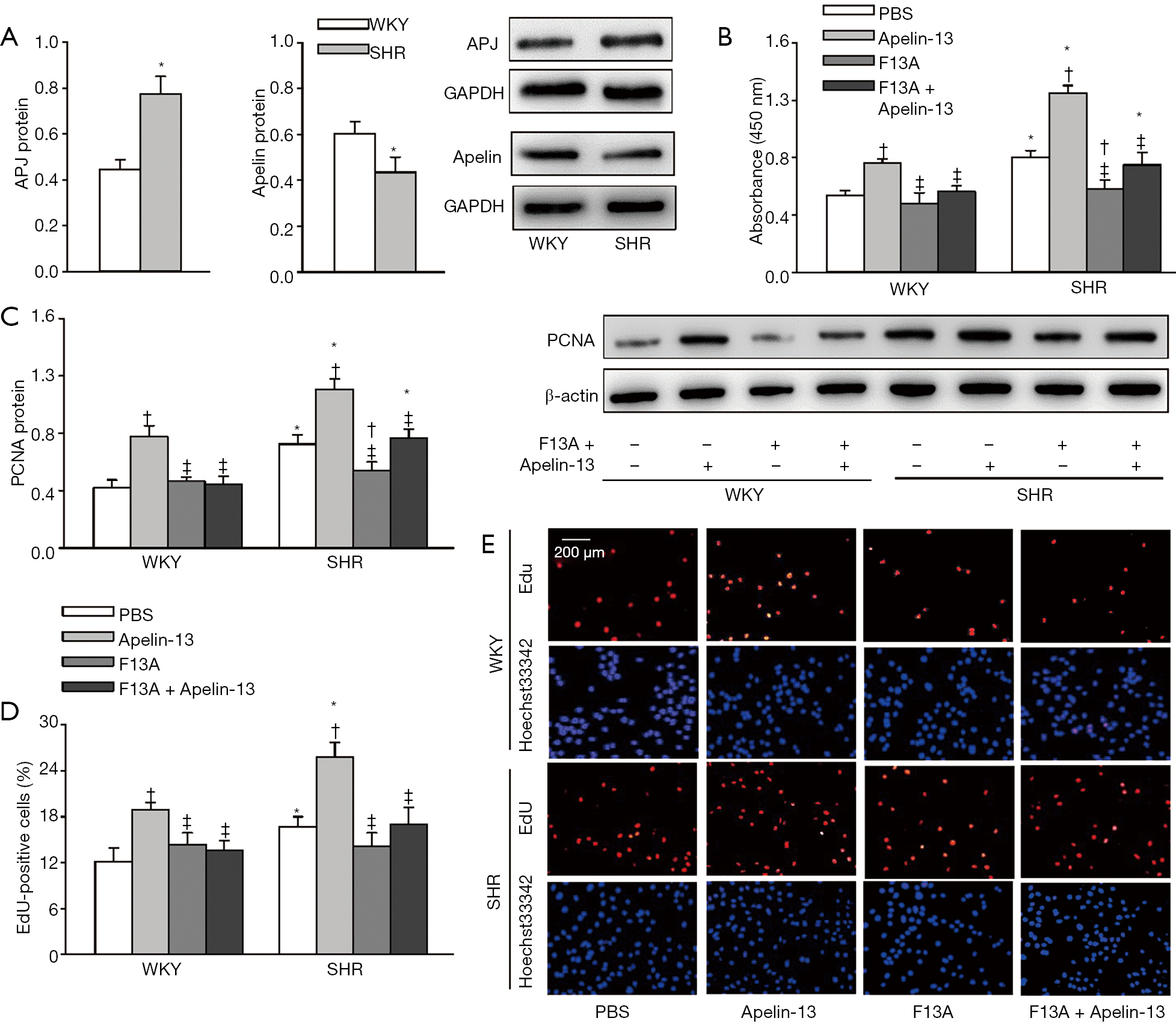 Effects of apelin-13 and F13A on VSMC proliferation

Effects of apelin-13 and F13A on autophagy of VSMCs 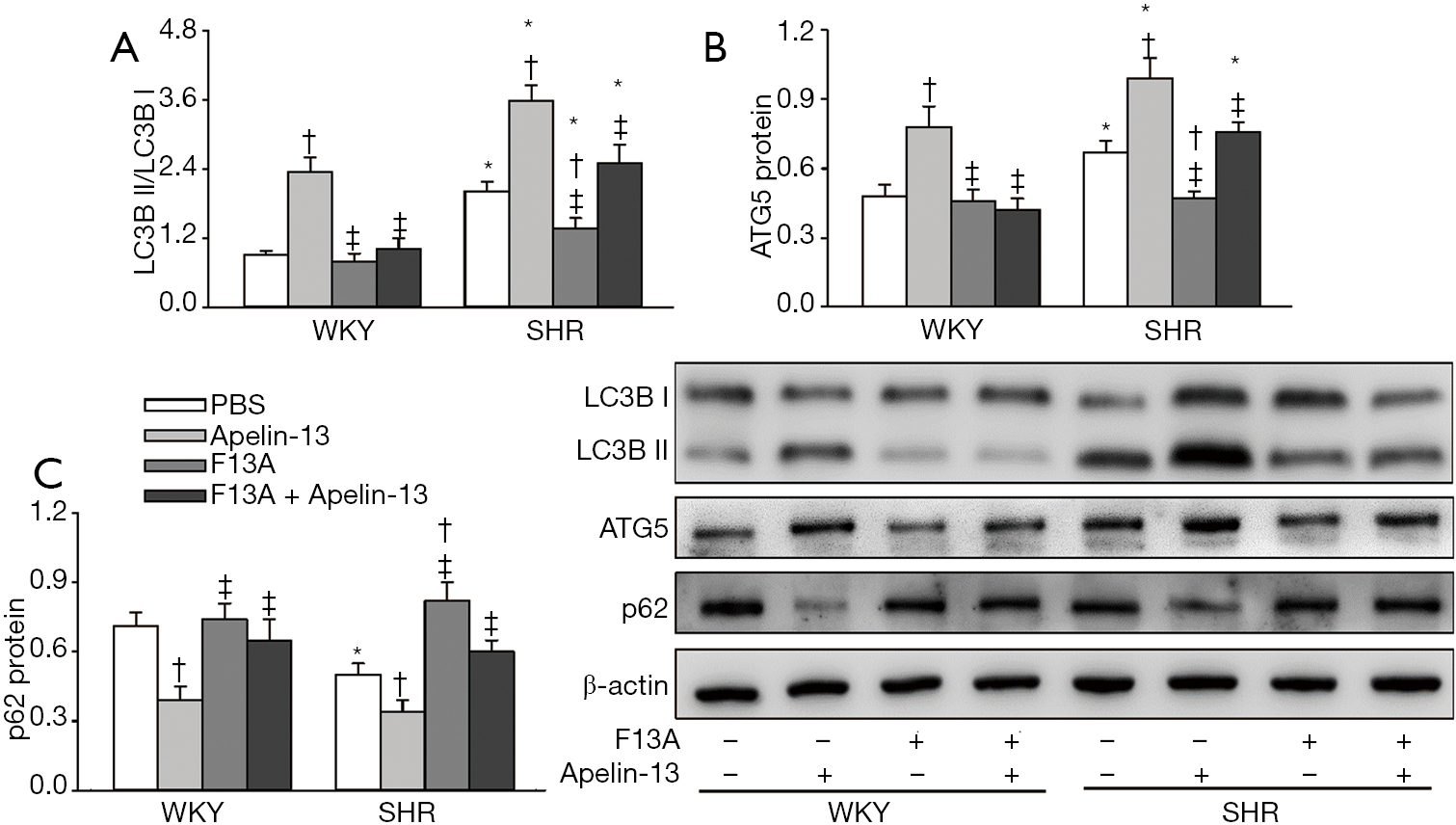 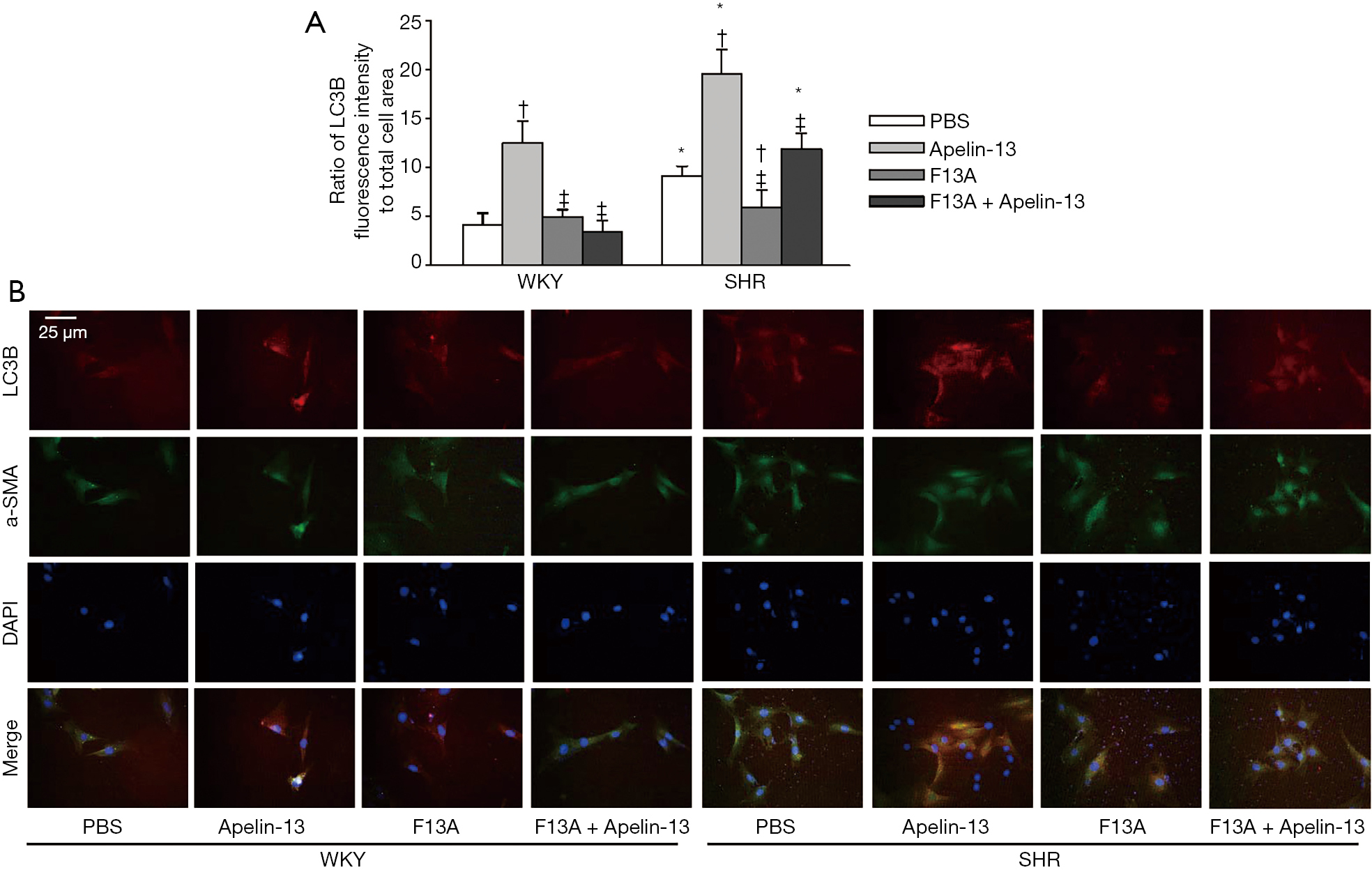 Time-effects of apelin-13 on VSMC autophagy and proliferation 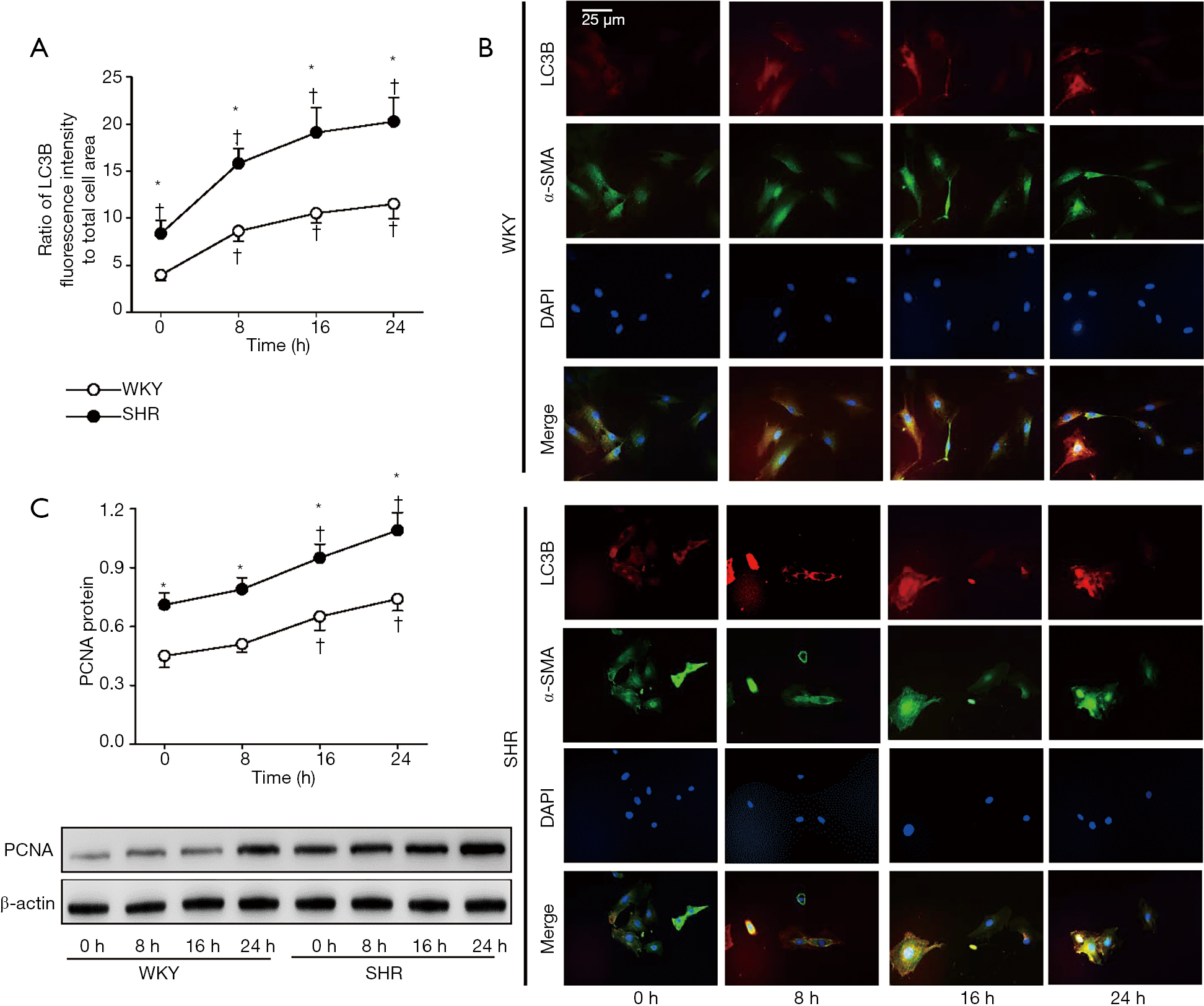 Figure 5 Time-effects of apelin-13 on LC3B and PCNA expressions in VSMCs of WKY and SHR. LC3B expression was determined with immunofluorescence staining. PCNA expression was examined with Western Blot. The measurements were respectively examined 0, 8, 16 and 24 h after apelin-13 (1 µM) treatment. (A) Relative fluorescence intensity of LC3B normalized with cell area. (B) Representative images of triple immunofluorescence staining for LC3B (red), α-SMA (green) and DAPI (blue). The α-SMA and DAPI staining were respectively used to show VSMC cells and nuclei. (C) VSMC proliferation evaluated with PCNA protein expression. Values are mean ± SE. *, P<0.05 vs. WKY; †, P<0.05 vs. 0 h. n=4.

Autophagy is crucial for lysosomal degradation and recycling process in cells, which is responsible for maintaining the homeostasis of cell survival and cell death as well as the cellular function. It is very important for waste removal and structural reconstruction in cells and is involved in the pathogenesis of hypertension (22). Generally, basal or mild autophagy level is beneficial for cellular homeostasis and cell survival, while moderate autophagy promotes cellular phenotype change, proliferation and migration, and excessive autophagy causes severe self-digestion and even cell death. Therefore, moderate or excessive autophagy is involved in vascular diseases including atherosclerosis and restenosis (41). We found that autophagy was enhanced in VSMCs of SHR, which was attenuated by blockade of APJ. The roles of apelin-13 in promoting VSMC autophagy of WKY and SHR were prevented by the blockade of APJ. More importantly, autophagy inhibitor attenuated VSMC proliferation of SHR, and prevents apelin-13-induced VSMC proliferation of both WKY and SHR. These findings provide solid evidences that apelin/APJ activation promotes VSMC proliferation by activating VSMC autophagy in SHR, which is supported by the fact that TP53-induced glycolysis and apoptosis regulator inhibits autophagy of pulmonary artery smooth muscle cells to prevent pulmonary arterial hypertension (27).

Reporting Checklist: The authors have completed the ARRIVE reporting checklist. Available at http://dx.doi.org/10.21037/atm-20-6891

Conflicts of Interest: All authors have completed the ICMJE uniform disclosure form (available at http://dx.doi.org/10.21037/atm-20-6891). The authors have no conflicts of interest to declare.

Ethical Statement: The authors are accountable for all aspects of the work in ensuring that questions related to the accuracy or integrity of any part of the work are appropriately investigated and resolved. Experiments were performed under a project license (No.: IACUC-1811017) granted by the Experimental Animal Care and Use Committee of Nanjing Medical University, in compliance with the Guide for the Care and Use of Laboratory Animals published by the US National Institutes of Health (NIH, 8th edition, 2011).