Fetal structural anomaly (FSA) and spontaneous abortion (SA) are two important types of adverse pregnancy outcomes (APOs). In the clinically recognized pregnancies, the incidence of FSA is approximately 3% (1,2), and the cumulative risk of SA is approximately 11–20% (3,4). Although various types of genetic variations can cause FSA and SA, human cytomegalovirus (HCMV) is one of the most important nonhereditary causes of APO (5-8). Nearly 30–40% of primary HCMV infected pregnant women have congenitally infected fetuses due to mother-child transmission (9,10). In the United States, 4% to 5% of live births have congenital HCMV infection (11), and approximately 10–15% have birth defects (12). To date, there is no evidence that pregnant women who are immune have a lower congenital HCMV infection risk (13). Furthermore, although HCMV-DNA positive pregnant women show a 3-fold greater chance of congenital infection, there is no positive correlation between HCMV DNA positivity and APO (14). Therefore, the identification of noninvasive predictors of APO for pregnant women with HCMV infection is an important gap in our knowledge.

MicroRNAs (miRNAs) are a type of noncoding RNA nucleotide ~22 nt in length that play a critical roles in various biological processes (15). Previous studies have revealed that a variety of miRNAs derived from the host itself and other species are highly stable in plasma and serum, and may serve as noninvasive biomarkers for various diseases (16-21). In addition, small noncoding RNAs can be transmitted through the mammalian placenta and directly regulate fetal gene expression (22).

HCMV encodes at least 26 mature miRNAs during its infectious life cycle (23). HCMV miRNAs can target both host and viral genes to regulate various aspects of cellular and viral biology, such as host immune responses (24-26), cell cycle regulation (27), viral replication (28), and viral latency (29-32). HCMV-encoded miRNAs have been confirmed to exist in plasma, and they are associated with hypertension, chronic hepatitis B and oral lichen planus (33-35). However, the plasma signature of HCMV-encoded miRNAs in pregnant women with APO and its clinical relevance have not been studied.

We postulated the existence of a unique plasma profile of HCMV-encoded miRNAs in pregnant women with APO, and used quantitative reverse-transcription polymerase chain reaction (RT-qPCR) assays to test this hypothesis. Furthermore, we evaluated the diagnostic potential of the significantly altered HCMV miRNAs in the plasma as a noninvasive predictor of APO for pregnant women with HCMV infection. We present the following article in accordance with the MDAR reporting checklist (available at http://dx.doi.org/10.21037/atm-20-7354).

The study was conducted in accordance with the Declaration of Helsinki (as revised in 2013). This study was approved by the Institutional Review Board of Qiqihar Medical University {[2017]19} and individual consent for this retrospective analysis was waived.

A total of 95 pregnant women were enrolled from the First, Second and Third Affiliated Hospitals of Qiqihar Medical University and Jianhua Hospital (Qiqihar, China), and obtained relevant permits. Normal or APO were determined based on clinical examinations and laboratory assessments. As shown in Table 1 and Table S1, 40 pregnant women with APO and 55 with normal pregnancy participated in this study. All blood samples were collected in EDTA tubes, and centrifuged at room temperature at 3,000 ×g for 10 min. The supernatant (plasma) and blood cells were stored separately at –80 °C until analysis. 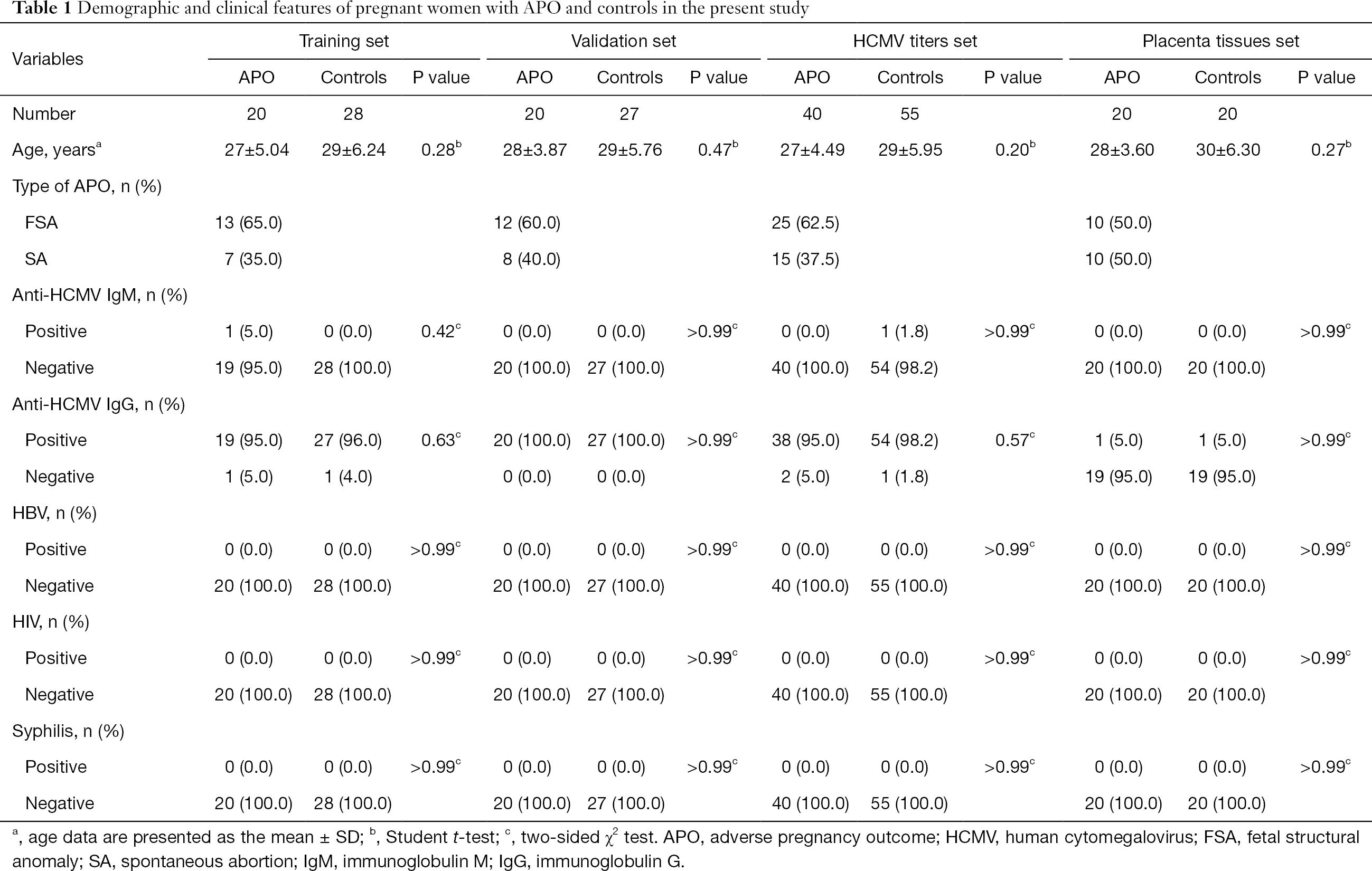 Total RNA was extracted from plasma using phenol/chloroform purification protocol. Briefly, 100 μL of plasma was diluted with 300 μL of ribonuclease-free water and 200 μL of acid phenol (Sigma, P4682), and then 20 μL of synthetic MIR2911 was added. After the mixture was vortex-mixed vigorously, 200 μL of chloroform was added. The sample was incubated at room temperature for 15 minutes and then centrifuged at 16,000 ×g for 20 minutes. The aqueous supernatant was transferred to a fresh 1.5 mL microcentrifuge tube and mixed with 2 volumes of isopropyl alcohol and 1/10-volume of 3 M sodium acetate (pH 5.3). Next, the mixture was stored at –20 °C for 2 h and then centrifuged at 16,000 ×g for 20 minutes. Subsequently, the RNA pellet was collected, washed with 75% ethanol and dried for 10 minutes at room temperature. Finally, the pellet was dissolved in 30 μL of ribonuclease-free water and stored at –80 °C until further analysis. Total RNA was extracted from placenta tissues using TRIzol reagent (Invitrogen, CA, USA).

We performed a TaqMan probe-based RT-qPCR assay (Table S2) to investigate the differential expression of HCMV-encoded miRNAs between normal and APO groups as described previously (33,34). The RT-qPCR assays were performed in triplicate using an ABI 7300 instrument (Applied Biosystems, Foster City, CA, USA). Expression levels of miRNAs were calculated using the CT values. We assessed the detection limits of the RT-qPCR assay by performing calibration curves developed with synthetic miR-16 oligonucleotides (Figure S1). All reactions were performed in triplicate.

To investigate the copy numbers of HCMV in peripheral blood leukocytes (PBLs) and placenta tissues, RT-qPCR was performed on samples from 40 pregnant women with APO and 55 with normal pregnancy. DNA was extracted from PBLs and placenta tissues using Blood Genomic DNA Midi Kit (CWBIO, CW0541) and TIANamp Genomic DNA Midi Kit (TIANGEN, DP304-03) according to the manufacturer’s protocols. We amplified HCMV DNA by TaqMan real-time PCR with the following HCMV specific primers: HCMV DNA forward: 5'-CACGGTCCCGGTTTAGCA-3', HCMV DNA reverse: 5'-CGTAACGTGGACCTGACGTTT-3'. A 10-fold diluted recombinant plasmid containing the HCMV target sequence was used as a template for standard curve preparation (Figure S2). The procedure consisted of 45 cycles of denaturation at 95 °C for 15 seconds, annealing at 60 °C for 30 seconds and extension at 72 °C for 30 seconds. Plasmid DNA containing the HCMV target sequence was used in separate reactions serving as a positive control. Results were expressed as copies per 1 mL blood and 10 mg placenta tissues.

Anti-HCMV immunoglobulin G (IgG) and immunoglobulin M (IgM) antibodies were detected with a commercially available ELISA kit (Dia.Pro Diagnostic Bioprobes s.r.l, CMVG.CE/S and CMVM.CE/S) according to the manufacturer’s instructions. For the IgG-ELISA, a value of <0.5 IU/mL was considered a negative result, and a value of >0.5 IU/mL was considered a positive result, indicating prior exposure to HCMV. For the IgM-ELISA, the test results were calculated using the optical density (OD) value at 450 nm, and the cut-off value for positivity was OD >1.2.

Expression profiles of HCMV-encoded miRNAs in plasma from pregnant women 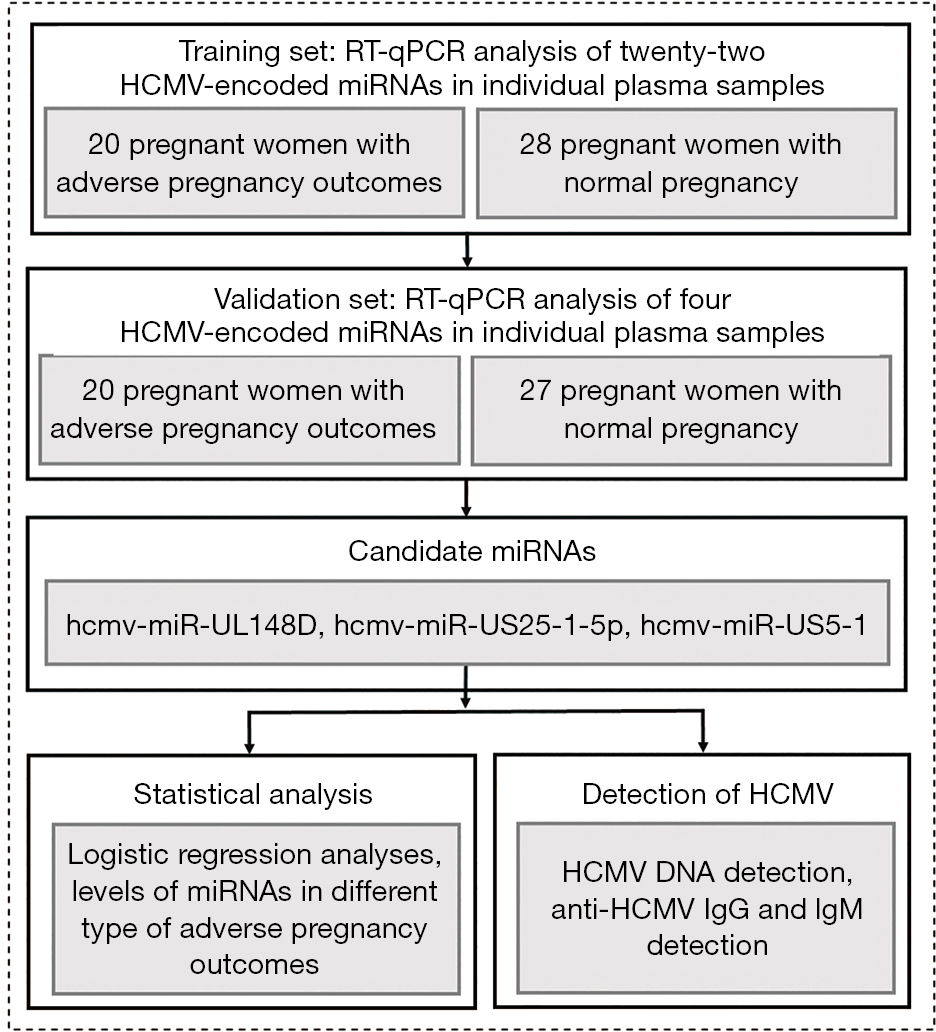 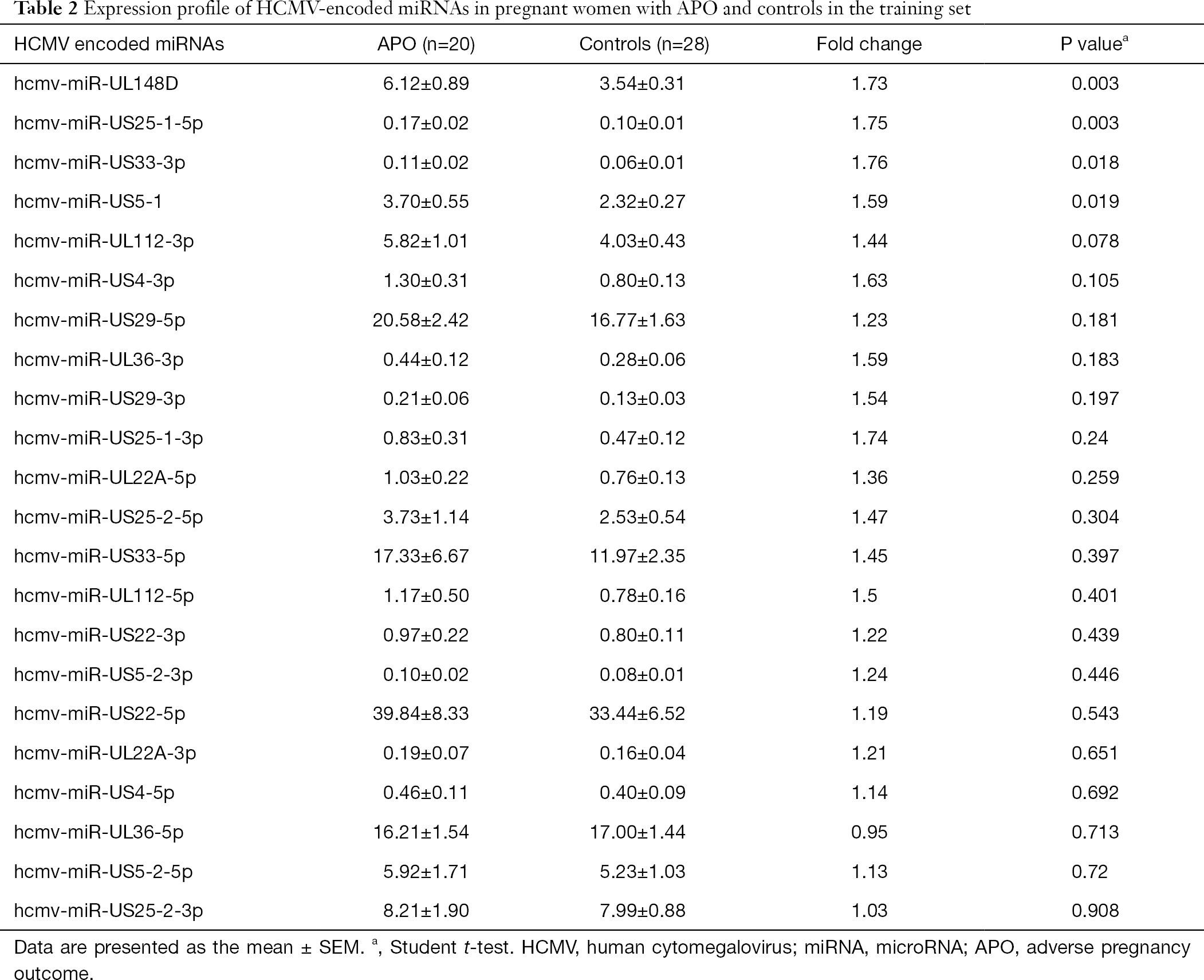 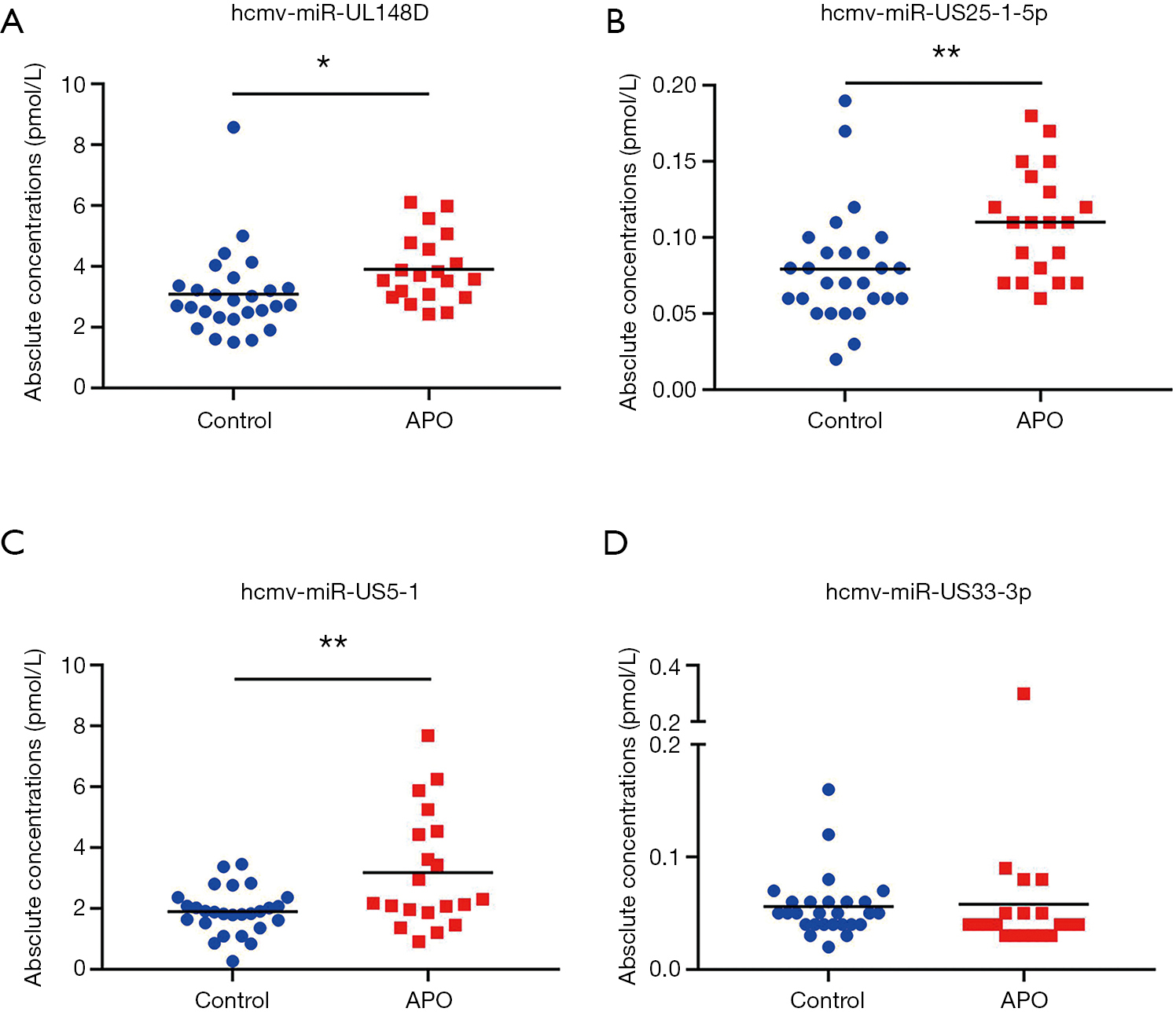 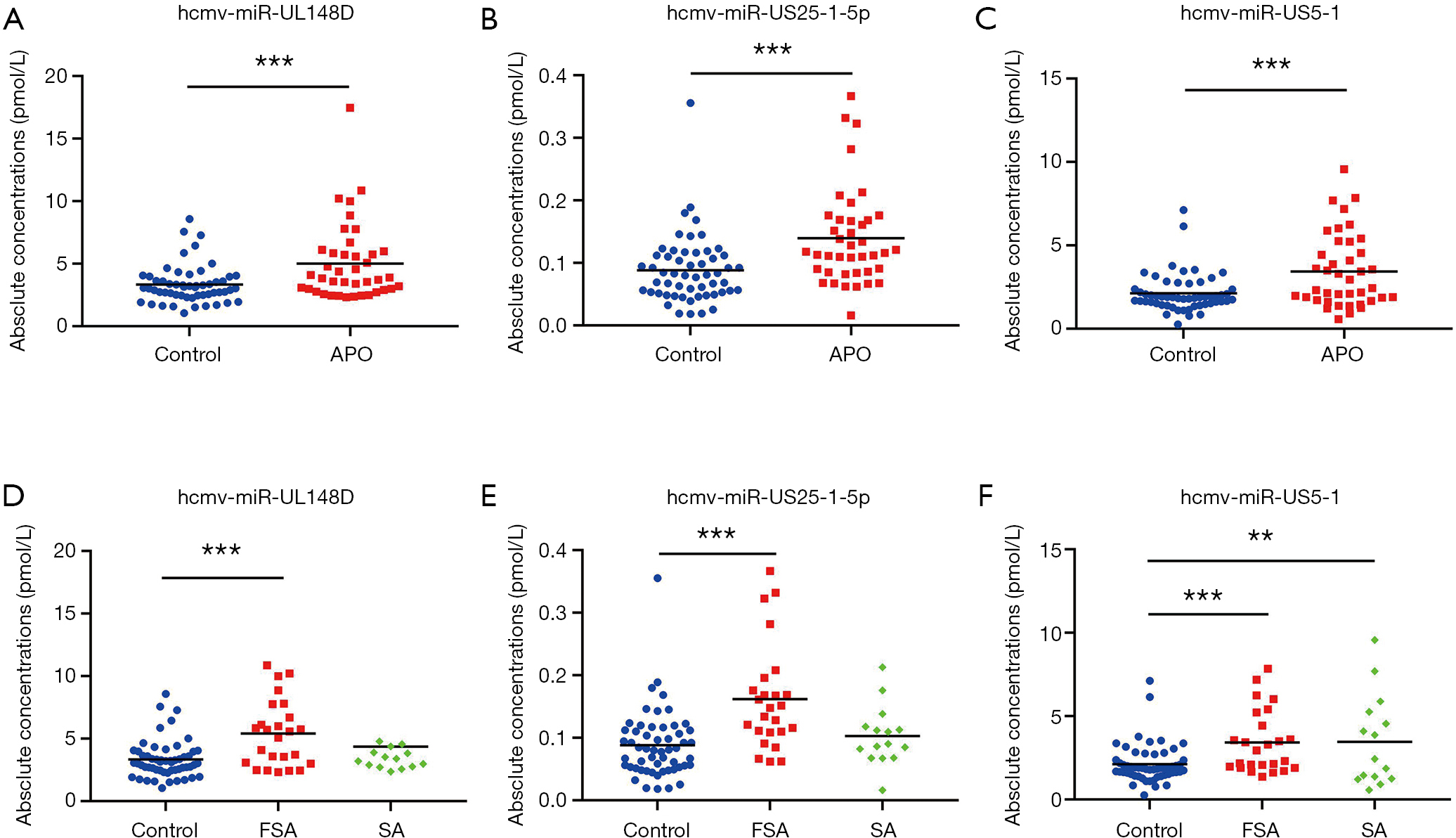 Detection of HCMV in pregnant women

Although various types of genetic variations can cause FSA and SA, congenital HCMV infection is one of the most important nongenetic causes of APO. However, there are no reliable qualitative or quantitative methods for the early prediction of APO due to HCMV infection in pregnant women. This study examined for the first time the relationship between HCMV-encoded miRNAs in maternal plasma and APO. Furthermore, our results indicated that plasma hcmv-miR-US25-1-5p may serve as a noninvasive biomarker of APO for pregnant women with HCMV infection.

In the present study, we assessed HCMV DNA in PBLs from our studied pregnant women and found no significant difference between pregnant women with APO and normal controls. HCMV DNA in maternal blood and/or serological investigation has become a key indicator for the diagnosis of primary infection (36). However, the correlation between HCMV DNA and congenital infection remains controversial (14,36-38). Additionally, HCMV DNA does not correlate with APO (14), consistent with our finding. Moreover, HCMV DNA in placenta tissues of pregnant women was negative in this study, while hcmv-miR-US25-1-5p was upregulated in placenta tissues of pregnant women with APO, indicating hcmv-miR-US25-1-5p is easier to pass through the placenta than HCMV. Our results showed that more than 90% of the pregnant women in both study cohorts were anti-HCMV IgG positive, with no significant difference in positivity rates for anti-HCMV IgG or IgM. There is also no strong evidence that antiviral antibody responses provide protection against maternal infection, intrauterine transmission, or APO (39). Currently, predictors of APO in pregnant women with HCMV infection are not well defined, and solving this problem has important clinical value. Our results show that HCMV-encoded miRNAs are able to distinguish pregnant women with APO from normal controls.

In general, prognosis can only be determined until at late pregnancy if the fetus has no ultrasound features or severe ultrasound abnormalities (40,41). Sometimes invasive operations are required to obtain fetal blood for some prognostic parameter measurements (42-44). Therefore, the use of plasma HCMV miRNAs as a noninvasive predictor of APO for pregnant women with HCMV infection has great clinical significance.

Our study identified three altered HCMV-encoded miRNAs in pregnant women. Based on the fact that exogenous/endogenous small noncoding RNAs in the maternal system can be transferred through the mammalian placenta and influence fetal development and health by directly regulating fetal gene expression (22), determining whether the three HCMV-encoded miRNAs can influence fetal development warrants future study.

The validated downstream target genes for hcmv-miR-UL148D include IER5, ACVR1B, RANTES, and IEX-1 (23,29,45,46), and those for hcmv-miR-US25-1-5p include CD147, cyclin E2, BRCC3, YWHAE, UBB, NPM1, and HSP90AA (27,47-49); those for hcmv-miR-US5-1 include GMNN, IKKα, IKKβ, and US7 (50-53). These validated target genes can be divided into four categories: viral latency (IER5, ACVR1B, and RANTES), viral replication (YWHAE, UBB, NPM1, HSP90AA, GMNN, and US7), immune evasion (ACVR1B, RANTES, IKKα, and IKKβ), and cell processes (IEX-1, CD147, cyclin E2, BRCC3). Downregulation of these genes by HCMV-encoded miRNAs may interfere with host immune responses and the cell cycle, leading to abnormalities in embryonic development. The above results indicate that the HCMV-encoded miRNAs identified in our study may contribute to the pathogenesis of HCMV infection-related diseases as well as APO, but further research is needed.

Overall, our study shows that HCMV-encoded miRNAs in plasma are safe, stable, and specific biomarker candidates for APO monitoring and prognosis. Moreover, the required testing costs are relatively low. As the factors leading to APO in pregnant women are complex, it is necessary to further exclude the known confounding factors that affect the results of the maternal cohort study. This study only compared the two major types of APO (FSA and SA) with normal pregnant women, and more detailed classification and larger sample sizes for prospective studies are needed. Although we clarified the relationship between plasma HCMV-encoded miRNAs and APO in pregnant women, the function of these identified HCMV miRNAs on intrauterine transmission and the pathogenic mechanism have not yet been elucidated. Therefore, further careful design and implementation of prospective studies are required.

Funding: This project was funded by the Heilongjiang Province Department of Education (UNPYSCT-2018035) and by the Research Foundation of Qiqihar Medical University (QY20147-01).

Reporting Checklist: The authors have completed the MDAR reporting checklist. Available at http://dx.doi.org/10.21037/atm-20-7354

Ethical Statement: The authors are accountable for all aspects of the work in ensuring that questions related to the accuracy or integrity of any part of the work are appropriately investigated and resolved. The study was conducted in accordance with the Declaration of Helsinki (as revised in 2013). This study was approved by the Institutional Review Board of Qiqihar Medical University {[2017]19} and individual consent for this retrospective analysis was waived.