Postoperative acute pain management is one of the essential elements of enhanced recovery after surgery (ERAS) (1). In some cases, it may result in harmful physiological and psychological consequences, which may delay recovery and the return to normal daily functioning. Most importantly, it has been recognized that inadequate postoperative pain treatment leads to chronic pain (2). Approximately 50–80% of patients suffer moderate to severe pain following oral surgery, which usually peaks within 3 to 6 hours after surgery (3,4). Non-steroidal anti-inflammatory drugs (NSAIDs) are widely recommended in postoperative pain therapy to relieve postoperative pain by adding/substituting opioid-containing analgesic combinations (5). However, conventional NSAIDs have been reported to be associated with impaired platelet function and gastrointestinal adverse events (AEs) (6,7). Imrecoxib, a novel cyclooxygenase-2 (COX-2) selective NSAID (8), has been approved in China for more than 9 years. It has been shown to relieve osteoarthritis pain as effectively as celecoxib, and also has excellent gastrointestinal tolerability (9). One randomized trial demonstrated that imrecoxib could also achieve a good postoperative analgesic effect compared to the placebo following spinal surgery by being used in a pre-emptive fashion (10). Therefore, imrecoxib might be a good selective NSAID option for the treatment of acute pain following oral surgery.

The aim of this prospective randomized, active-controlled, non-inferiority trial was to assess the efficacy and safety of imrecoxib for treating moderate or severe acute pain following oral surgery. We hypothesized that imrecoxib would reduce pain scores and exhibit non-inferior pain-relief compared with celecoxib for moderate or severe postoperative pain. We present the following article in accordance with the CONSORT reporting checklist (available at http://dx.doi.org/10.21037/atm-21-264).

This prospective randomized, active-controlled trial was performed in the wards of the Affiliated Stemmatological Hospital of Nanjing Medical University in China. Patients aged between 18 and 65 years old were eligible if they suffered moderate or severe pain as defined by a visual analogue scale (VAS) score ≥40 mm within 6 hours following oral surgery. Oral surgery included the extraction of an impacted mandibular molar or maxillary sinus cyst, which are two of the most common oral surgeries. Patients with an allergy to sulfa-based drugs, those with prior adverse reaction to NSAIDs, or those who were on chronic narcotics alternative pain management regimens prior to surgery were excluded.

After confirmation of eligibility, patients were randomized (1:1) to receive either imrecoxib or celecoxib using the simple randomization method. The allocation sequence was computer-generated (http://tools.medsci.cn/rand/getNewNum).

This trial was approved by the ethics committee of the Stemmatological Hospital of Nanjing Medical University in China (ethics committee reference number YJ2018-009-02). All procedures performed in this study involving human participants were in accordance with the Declaration of Helsinki (as revised in 2013). All participants provided written informed consent before enrollment.

The primary endpoint of the study was TOTPAR, and the secondary endpoints included PID, PR at each time point, SPID, overall assessment, rescue medicine, and AEs.

All oral surgeries were performed by the same surgeon (Dr. Huaiqi Li) and followed the same anesthetic protocol during the operation. Operations were scheduled before 12 am to ensure that the pain assessments would not be conducted during the middle of the night. Other anesthetic properties were forbidden during the study and drug combinations were recorded.

The sample size calculation for the two-tailed testing of the imrecoxib non-inferior hypothesis was based on the TOTPAR. The TOTPAR was estimated as 13±4.5 [mean ± standard deviation (SD)] in both groups. A non-inferiority margin of −3 was chosen as it represents approximately half of the observed TOTPAR of the placebo based on the placebo-control celecoxib trail (11). According to our power analysis (α=0.05, β=0.2), a sample size of 30 participants per group was required with 10% dropout rate.

Figure 1 Flow chart of this trial. 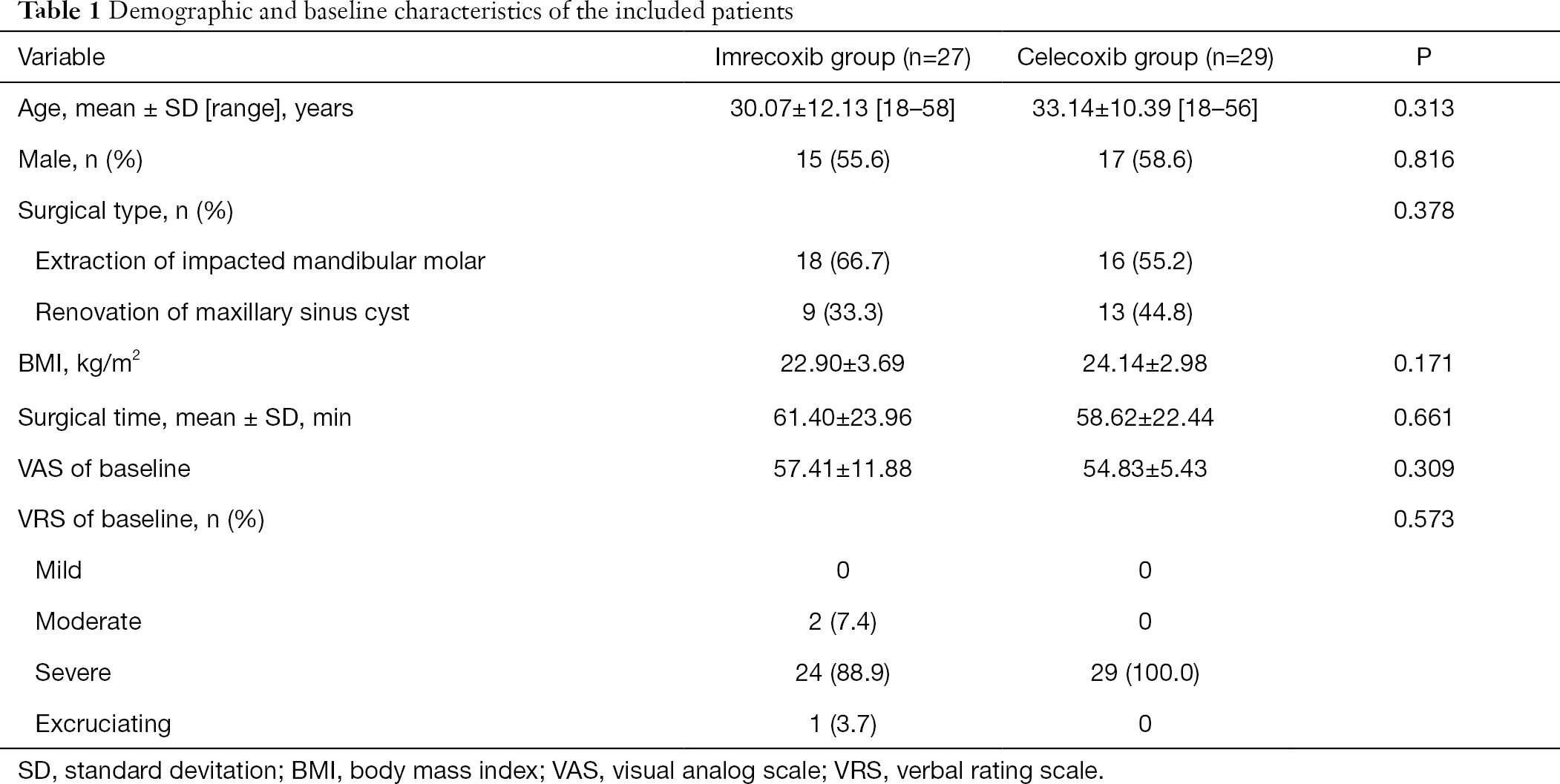 Figure 2 The total pain relief (TOTPAR) and pain relief (PR) results. (A) TOTPAR difference between the imrecoxib and celecoxib groups; and (B) mean RP over the 24-hour post-dosing period. The dotted line represents the -3 non-inferiority margin and the error bars represent 95% confidence interval (CI). The TOTPAR of the two groups are shown in Table 2.

In general, no significant difference was observed in PR, PID, and SPID between the two groups. Differences in the average PR at each time point over the 24-hour post-dosing period were negligible (all P>0.05). The PR peaked at 4 hours in both groups (Figure 2B). The mean PID scores of both groups increased notably over time, and the mean PID scores of the imrecoxib group were comparable to those of celecoxib group at each time point over the 24-hour post-dosing period (all P>0.05) (Figure 3A). The mean SPID scores were not significantly different between the two groups (208.27±63.20 in the imrecoxib group vs. 200.86±40.80 in the celecoxib group, P=0.612) (Table 2). Also, the proportions of four point scale according to the VRS with imrecoxib were similar to those of celecoxib at each time point (all P>0.05) (Figure 3B). All patients in both groups gave a good or excellent assessment and there was no considerable difference in the overall assessment between the two groups (P=0.186). None of the patients received rescue medicine during the study. There were no perioperative complications observed in either of the groups. Monitored complications included cardiovascular thrombotic events, myocardial infarction, stroke, and severe gastrointestinal upset. No perioperative complications were reported in both groups. 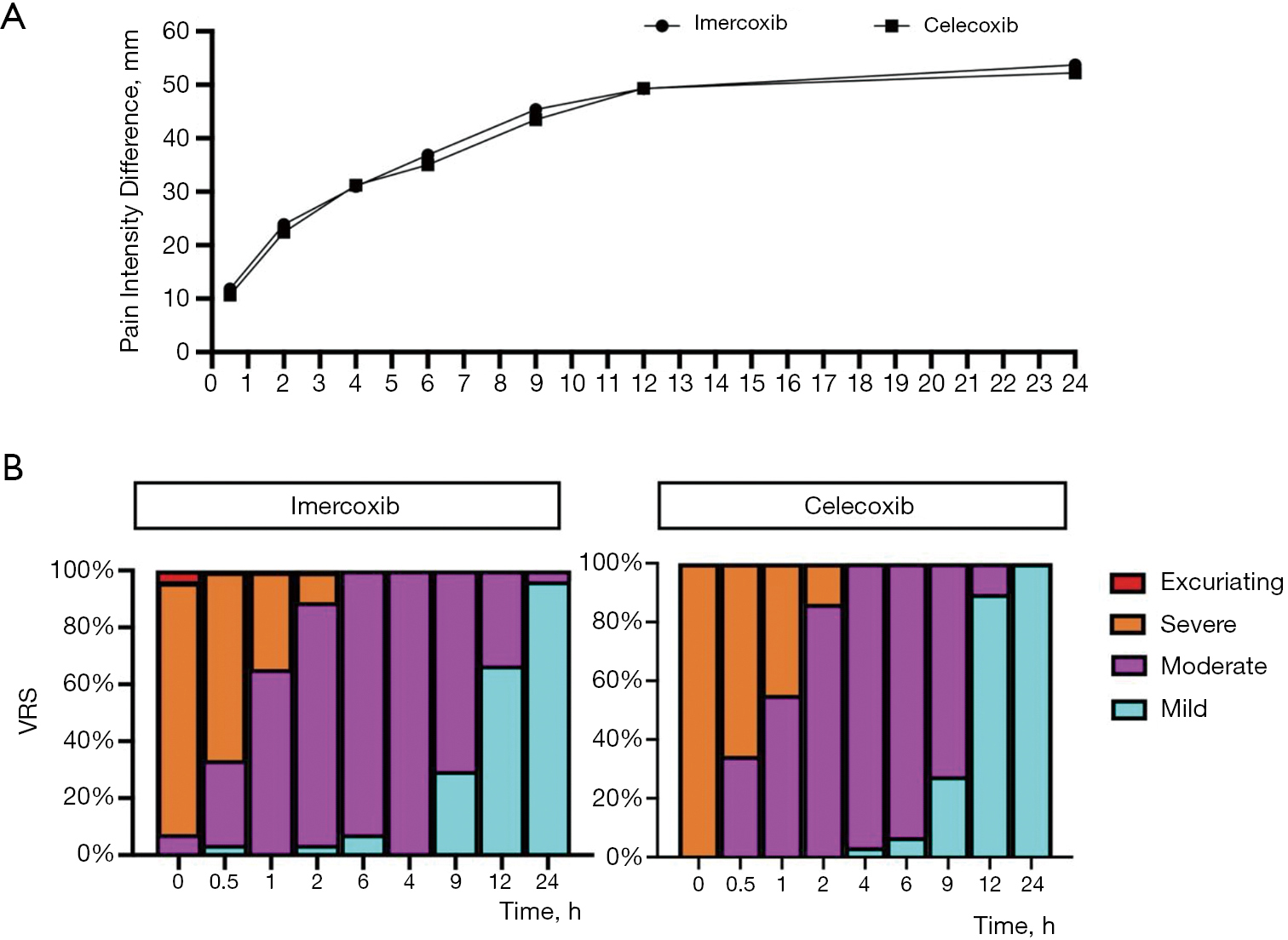 In this prospective, randomized, active-controlled, non-inferiority trial, imrecoxib showed a significant analgesic effect on moderate or severe acute pain therapy following oral surgery. No significant differences were found in TOTPAR, PID, PR at each time point, SPID, overall assessment, and rescue medicine between the imrecoxib and celecoxib groups (all P>0.005). No perioperative complications were reported in both groups.

Considering that imrecoxib is currently only sold in China, most of the analgesic research on imrecoxib have been published in Chinese journals. To our knowledge, this is the first published trial comparing imrecoxib and celecoxib in the postoperative treatment of pain following oral surgery. For the primary endpoint, the non-inferiority of TOTPAR for imrecoxib compared with celecoxib was achieved. The similar analgesic efficacy in the imrecoxib and celecoxib groups was unsurprising, especially considering the mechanism of action of imrecoxib as well as the results of previous studies. Firstly, COX is mainly divided into COX-1 and COX-2. As a novel and moderately selective COX-2 inhibitor (COXIB), imrecoxib produces anti-inflammatory and anti-pain effects by inhibiting the expression of COX-2 messenger ribonucleic acid (mRNA) (8). In vitro experiments have shown that imrecoxib has a selective inhibitory effect on COX-1 and COX-2, with the inhibitory effect on COX-2 stronger than COX-1. In various guidelines for ERAS (12,13), COXIBs and NSAIDs have been proposed as basic postoperative analgesic components, which can reduce the need for opioids. Selective COXIBs have been shown to be efficacious for dental pain management (14-16). Secondly, it has also been demonstrated that PR of ground walking at 12 weeks (the primary endpoint) was similar for those receiving imrecoxib and celecoxib in a phase 3 multi-center randomized blind-controlled trail study of imrecoxib in osteoarthritis (9). Another randomized controlled trial in axial spondylarthritis (axSpA) showed that patients experienced significant improvement in disease activity, functional parameters, and inflammatory markers when treated with imrecoxib for 12 weeks, and the efficacy of imrecoxib was not inferior to celecoxib (17). The present study provided support for the potential therapeutic effect of imrecoxib for acute postoperative pain, especially for acute pain following oral surgery.

No perioperative complications were reported in both groups during the 24-hour period after the first dose, which suggests a good tolerance of imrecoxib. In a phase 3 study, 351 osteoarthritis (OA) patients aged 56.44±7.08 years received imrecoxib 100 mg twice per day and 118 patients aged 56.14±7.63 years received celecoxib 200 mg once per day for 8 weeks; the results showed no significant differences in AEs between the two groups (7.85% in the imrecoxib group vs. 10.26% in the celecoxib group) (9). A multi-centered study involving 2,413 patients treated with imrecoxib for 8 weeks also showed a low AE profile for imrecoxib (18). Imrecoxib might have a better tolerance with a shorter treatment course in acute pain than that in OA.

The present study has several strengths. Firstly, the patient population was more representative for oral surgery, as patients undergoing extraction of an impacted mandibular molar or maxillary sinus cyst were both included, whereas other trials only included extractions of impacted mandibular molars. Secondly, we developed a good schedule plan to ensure the quality and feasibility of our assessments. Pain scores that are assessed frequently might disturb the patients’ sleep, thereby leading slightly inaccurate results. Therefore, operations in this study were scheduled before 12 am to ensure that the pain assessments would not be conducted during the middle of the night. Finally, all surgeries were performed by the same surgeon and followed the same anesthetic protocol, which helped to reduce the two confounding factors affecting postoperative pain.

However, this trial does have some limitations that should be noted. As this study was designed as a single-center trial, it might not have the generalizability that a multi-center trial typically retains. Also, this study only recorded the AEs that occurred during first 24 hours after the first dose, which might be too short for a sufficient safety assessment. The use of imrecoxib for the treatment of long-term postoperative pain and functional recovery could be assessed in future trials. Advanced studies of imrecoxib are still needed for exploring the efficacy and safety of postoperative pain management.

In conclusion, this trial demonstrated that imrecoxib could significantly relieve postoperative pain. It was shown to have a non-inferior analgesic efficacy to celecoxib with a good tolerance following oral surgery.

Funding: The study was supported by research grants from A Project Funded by the Priority Academic Program Development of Jiangsu Higher Education Institutions (PAPD, 2018-87).

Reporting Checklist: The authors have completed the CONSORT reporting checklist. Available at http://dx.doi.org/10.21037/atm-21-264

Conflicts of Interest: All authors have completed the ICMJE uniform disclosure form (available at http://dx.doi.org/10.21037/atm-21-264). The authors have no conflicts of interest to declare.

Ethical Statement: The authors are accountable for all aspects of the work in ensuring that questions related to the accuracy or integrity of any part of the work are appropriately investigated and resolved. This trial was approved by the ethics committee of the Stemmatological Hospital of Nanjing Medical University in China (ethics committee reference number YJ2018-009-02). All procedures performed in this study involving human participants were in accordance with the Declaration of Helsinki (as revised in 2013). All participants provided written informed consent before enrollment.