Development and validation of a novel prognostic nomogram including tumor deposits could better predict survival for colorectal cancer: a population-based study

Colorectal cancer (CRC) is the third most common malignant tumor in the United States and the fifth most common in China (1,2). The stage of CRC has a great impact on its treatment. CRC is treated with different postoperative strategies depending on the stage. Generally, stage III and high-risk stage II CRC patients receive postoperative adjuvant chemotherapy.

Tumor deposits (TDs) are discrete cancerous nodules located around the pericolic or perirectal fat or adjacent mesentery, with no obvious features of lymph node tissue or vascular structure. The differences between TDs and lymph node tissue are no recognizable lymph node structure in TDs. The latest version of the American Joint Committee on Cancer (AJCC) 8th edition of the TNM staging system has acknowledged the potential of the influence of TDs on CRC patients’ survival outcome. As a reference factor for a high recurrence rate and poor prognosis, TDs increase the clinical doctor’s awareness of the influence of adjuvant therapy selection. The AJCC 8th edition staging system states that TDs are a poor prognostic factor and continues to classify TDs as N1c while making it clear that TDs do not change the T stage of primary tumors. If there is no regional lymph node metastasis, TDs will change the N stage (N0→N1c), and if there is regional lymph node metastasis, the number of TDs does not need to be calculated with the number of positive lymph nodes.

TDs are an important factor in CRC prognosis (3-5). The description of TDs in the AJCC 5th edition staging system is as follows: size, >3.0 mm; TDs are classified as lymph node metastasis, and primary TDs (PTDs) ≤3.0 mm are classified as continuous stage Dukes B adenocarcinoma (6). The description of TDs in the AJCC 6th edition staging system is contour; if there are nodules in the connective tissue of the lymphatic drainage area of the original tumor, there is no evidence of residual histology (7). TDs with regular and smooth shapes are classified as pN (regional lymph node metastases), while those with irregular shapes are classified as pT or V1 (microvein invasion) or V2 (visible to the unaided eye) (considered venous invasion) (8). In the AJCC 7th edition staging system, TDs are classified as a new type of metastatic nodule, pN1c (9). These factors of morphological size are difficult to study with data records. The number of TDs is recorded in the Surveillance, Epidemiology, and End Results (SEER) database. Whether the number of TDs affects the prognosis of CRC patients needs further discussion. Previous studies performed nomogram analysis of CRC stage III combined with TD stage (10). However, there is no nomogram model to show the impact of the number of TDs on the overall score. Our study developing and validating prognostic nomogram of stage III CRC patients and stage III CRC patients with TDs showed the influence of TD number on prognosis.

We present the following article in accordance with the TRIPOD reporting checklist (available at http://dx.doi.org/10.21037/atm-20-4728).

The exclusion criteria were any of the following characteristics: missing or incomplete data on: (I) the number of TDs, (II) T, N, or M stage, (III) grade, (IV) tumor histology, (V) follow-up, (VI) no surgery, (VII) nonpathological confirmation of lymph node metastasis or neoadjuvant chemotherapy, and (VIII) more than one primary tumor. Complete-case analysis was used. Ultimately, 21,306 patients were identified. Patients 1:1 randomly divided into the training set or the testing set. The study was conducted in accordance with the Declaration of Helsinki (as revised in 2013).

The chi-square test was used to compare categorical variables of demographic and clinicopathological characteristics. The Kaplan-Meier method and log-rank test were used to compare differences in survival. Cancer-specific survival (CSS) was defined as the date of diagnosis to the date of death due to cancer.

The cutoff point for the number of TDs was analyzed using X-Tile software, version 3.6.1 (http://www.tissuearray.org). X-Tile identified the cutoff with the minimum P values from log-rank χ2 statistics and categorized TDs in terms of survival.

Concordance index (C-index) were used to evaluate the predictive value of nomogram. Using a 45-degree line as an optimal model, calibration plots were used for the comparison between nomogram-predicted CSS and actual CSS.

In total, 21,306 patients were included in this research, of which 10,653 were randomly assigned to the training set or the testing set (Figure 1). 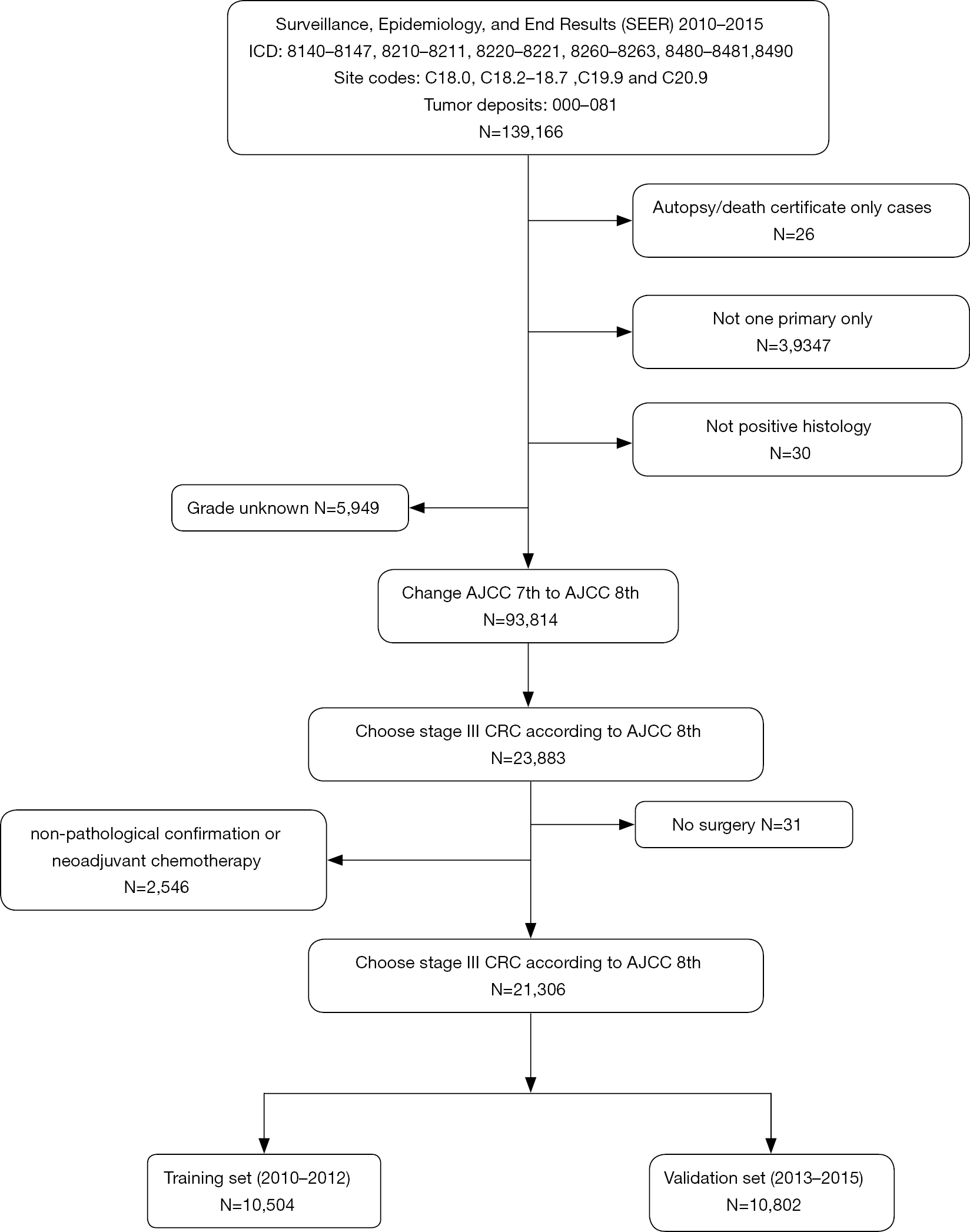 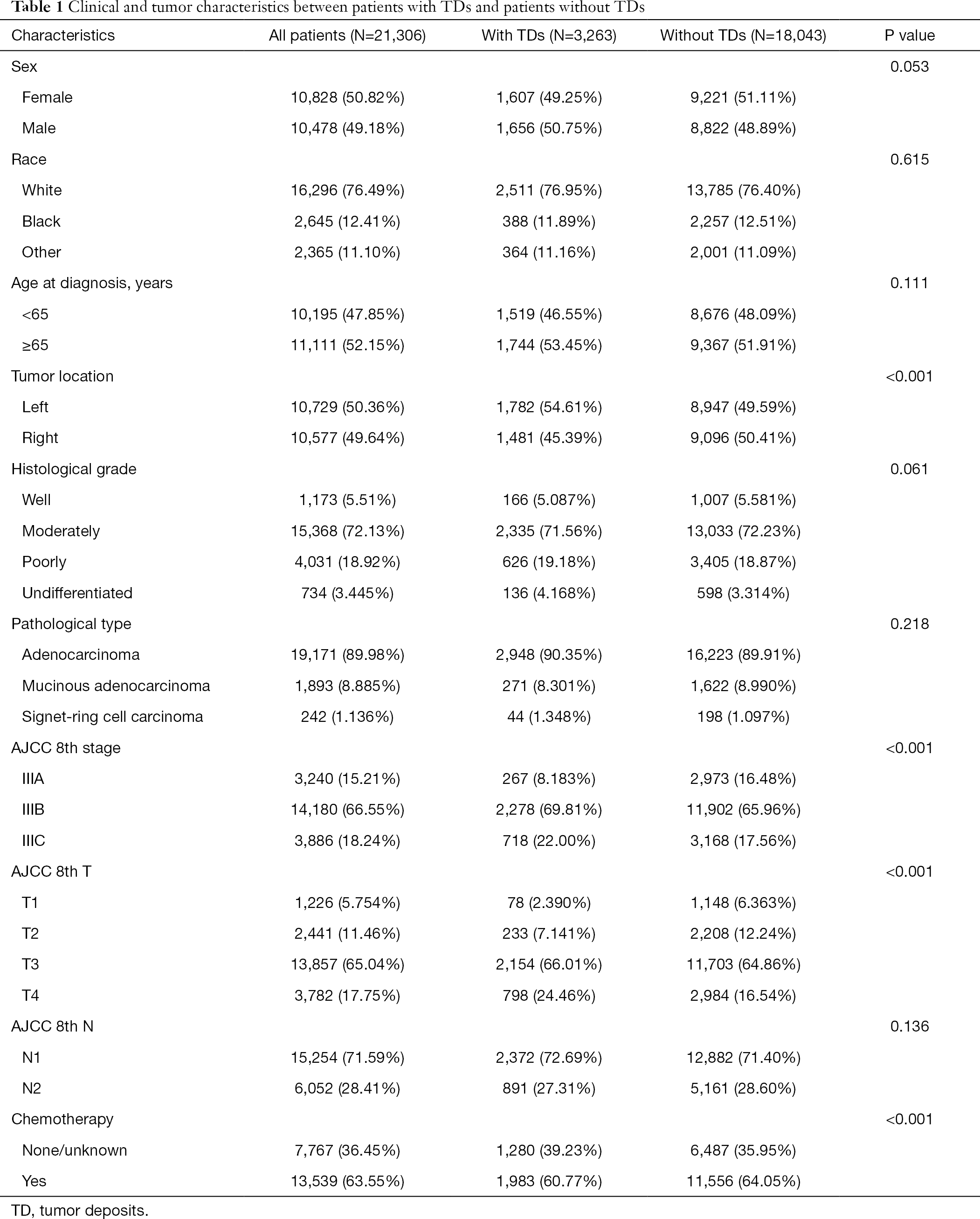 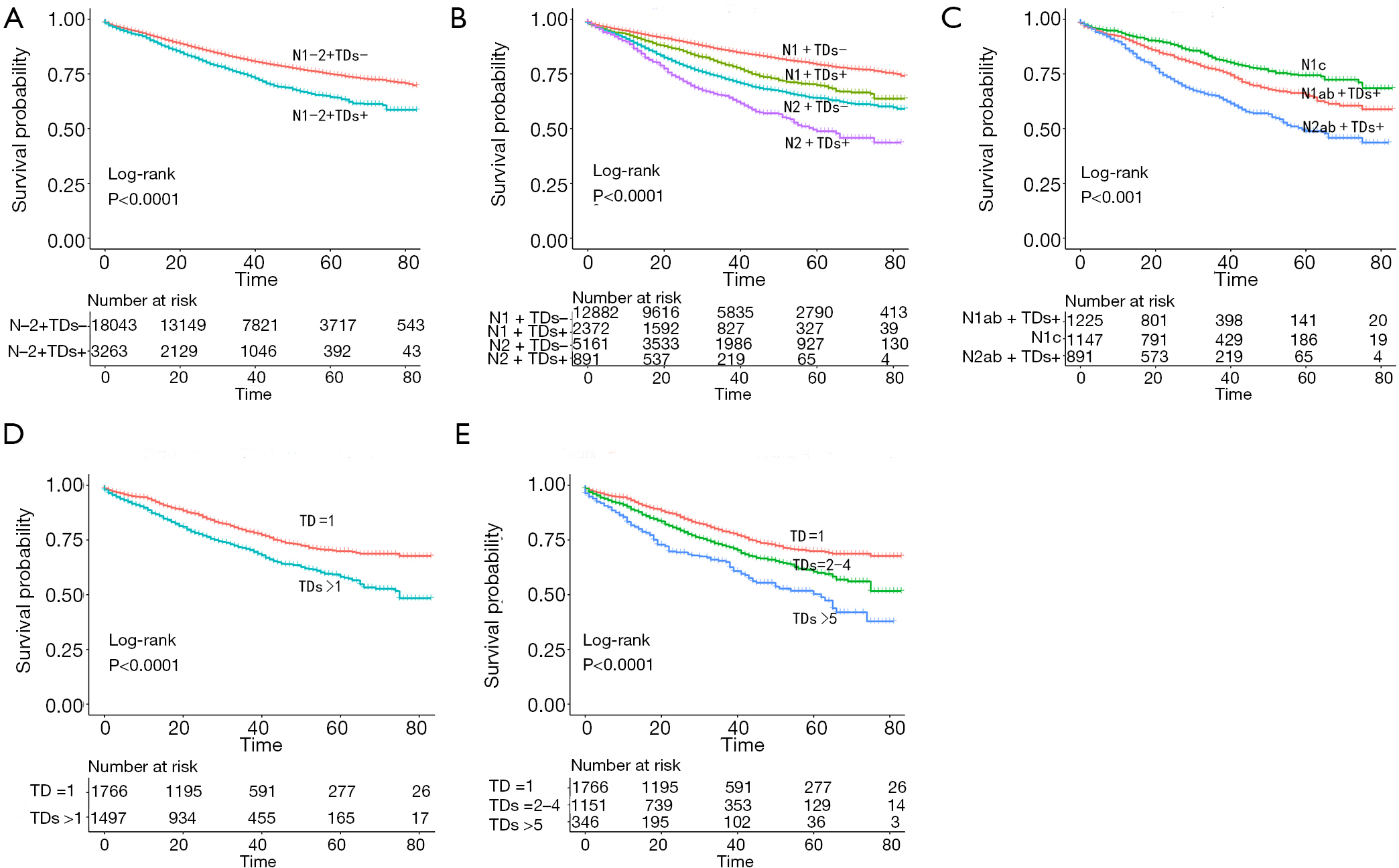 Clinical and tumor characteristics between training set and testing set 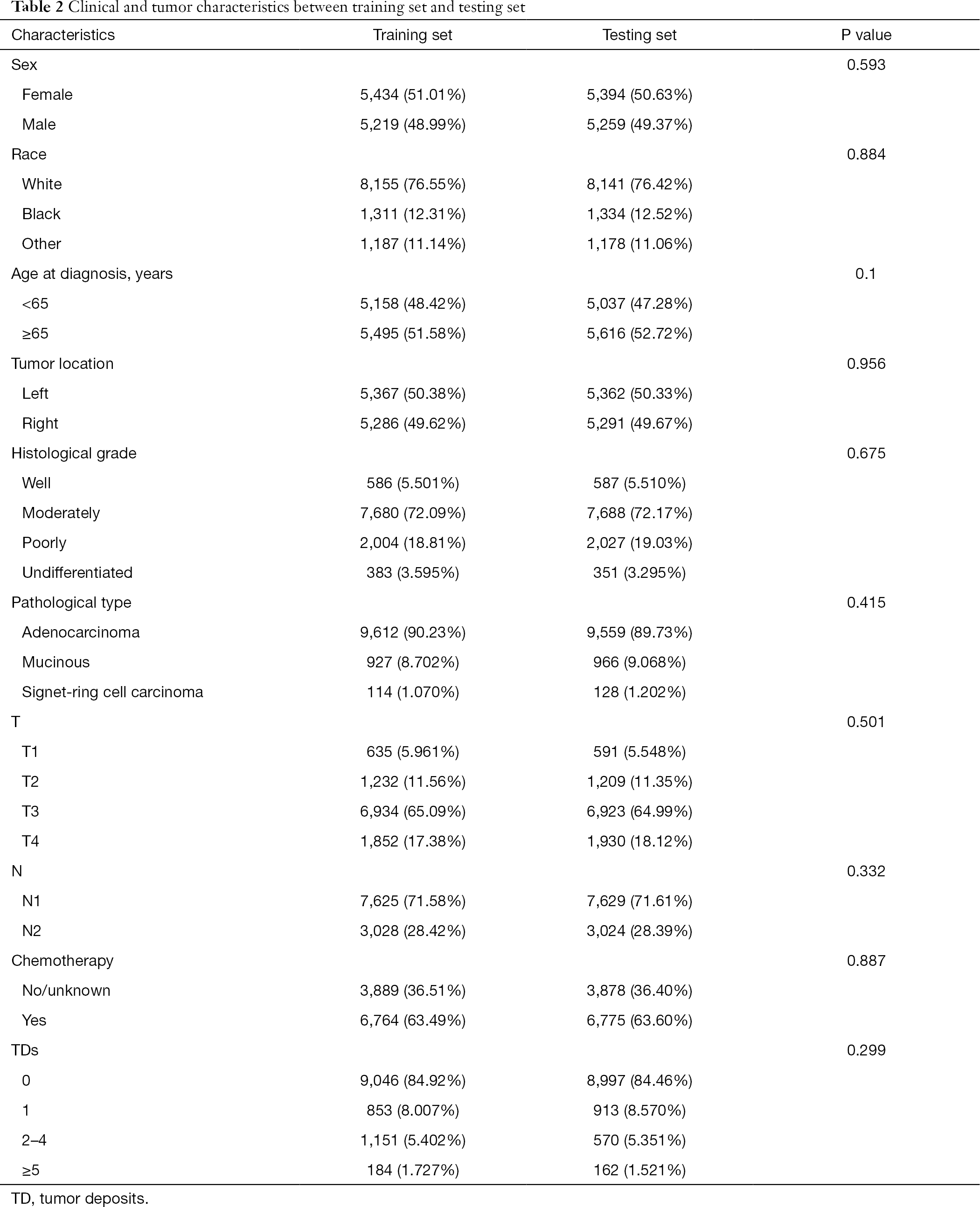 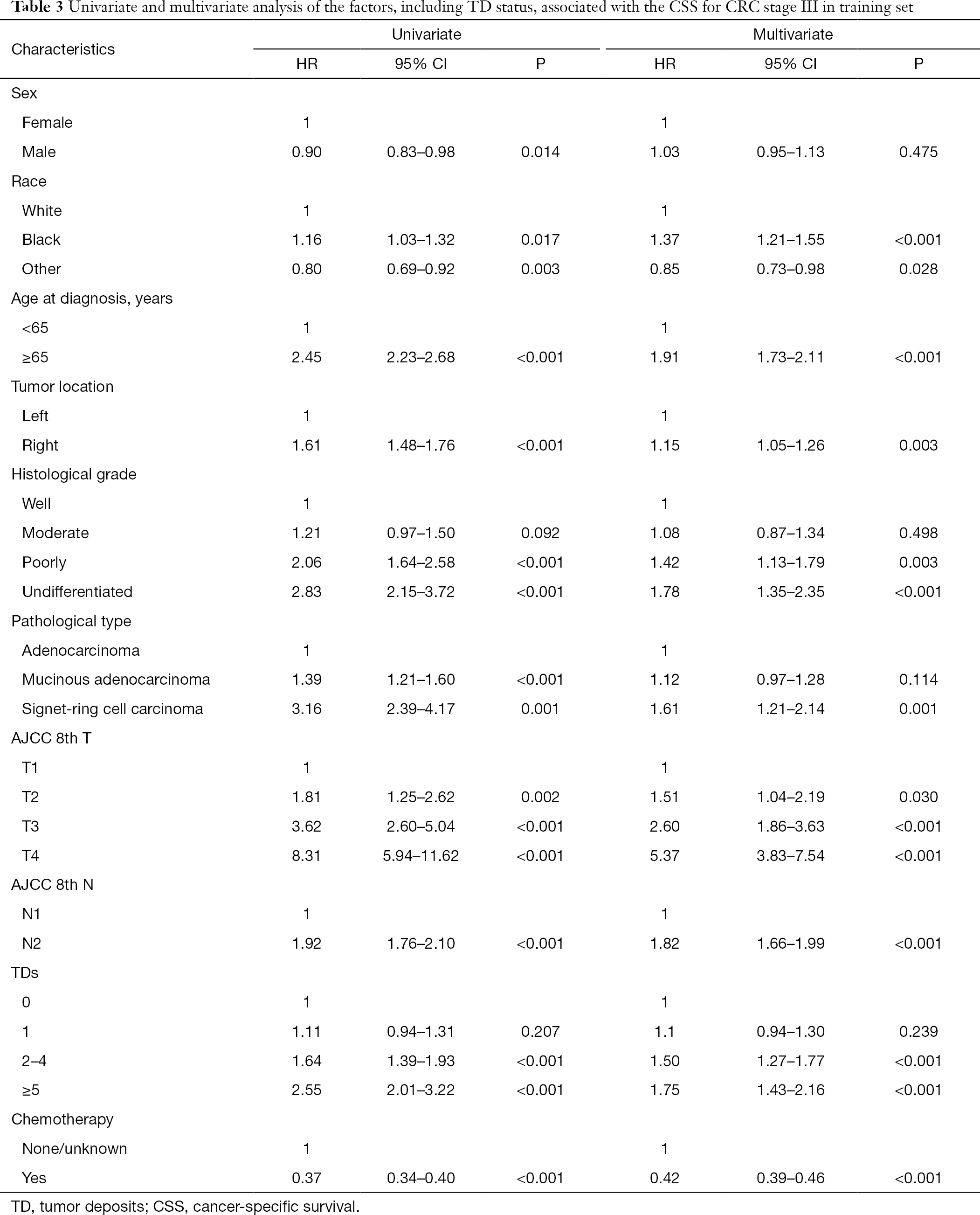 Table 3 Univariate and multivariate analysis of the factors, including TD status, associated with the CSS for CRC stage III in training set
Full table

Construction of nomogram and nomogram validation 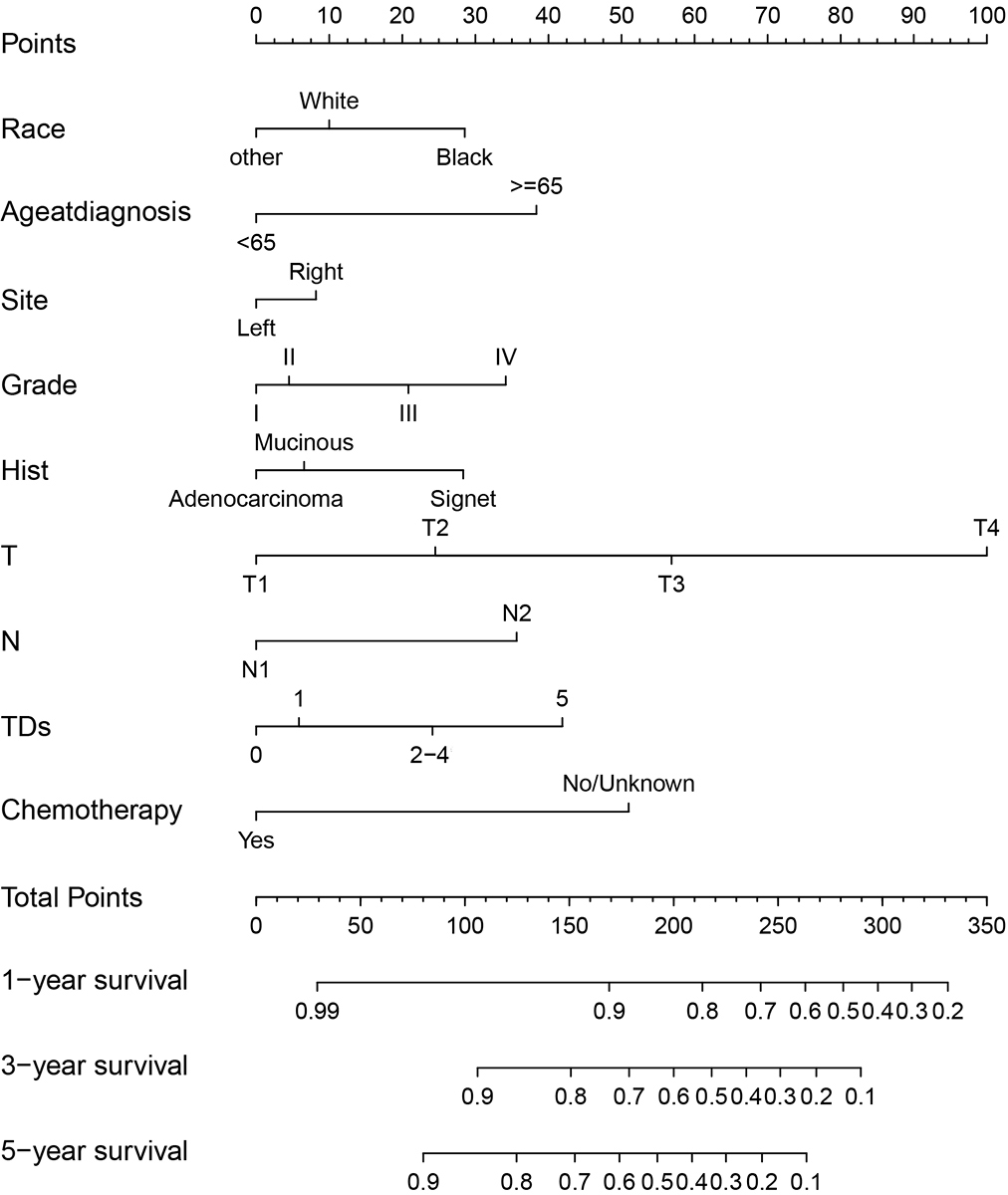 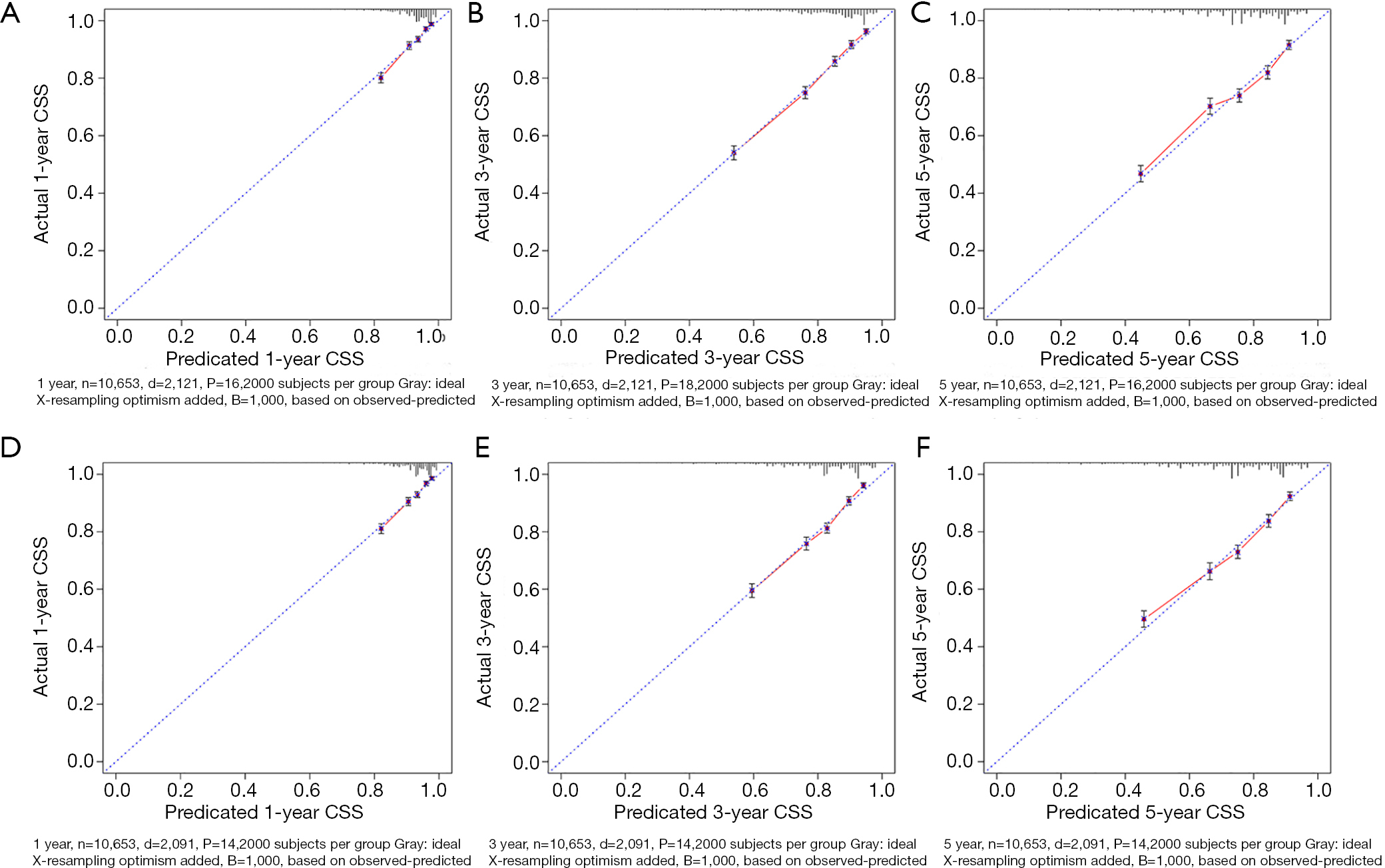 Clinical and tumor characteristics of patients with TDs 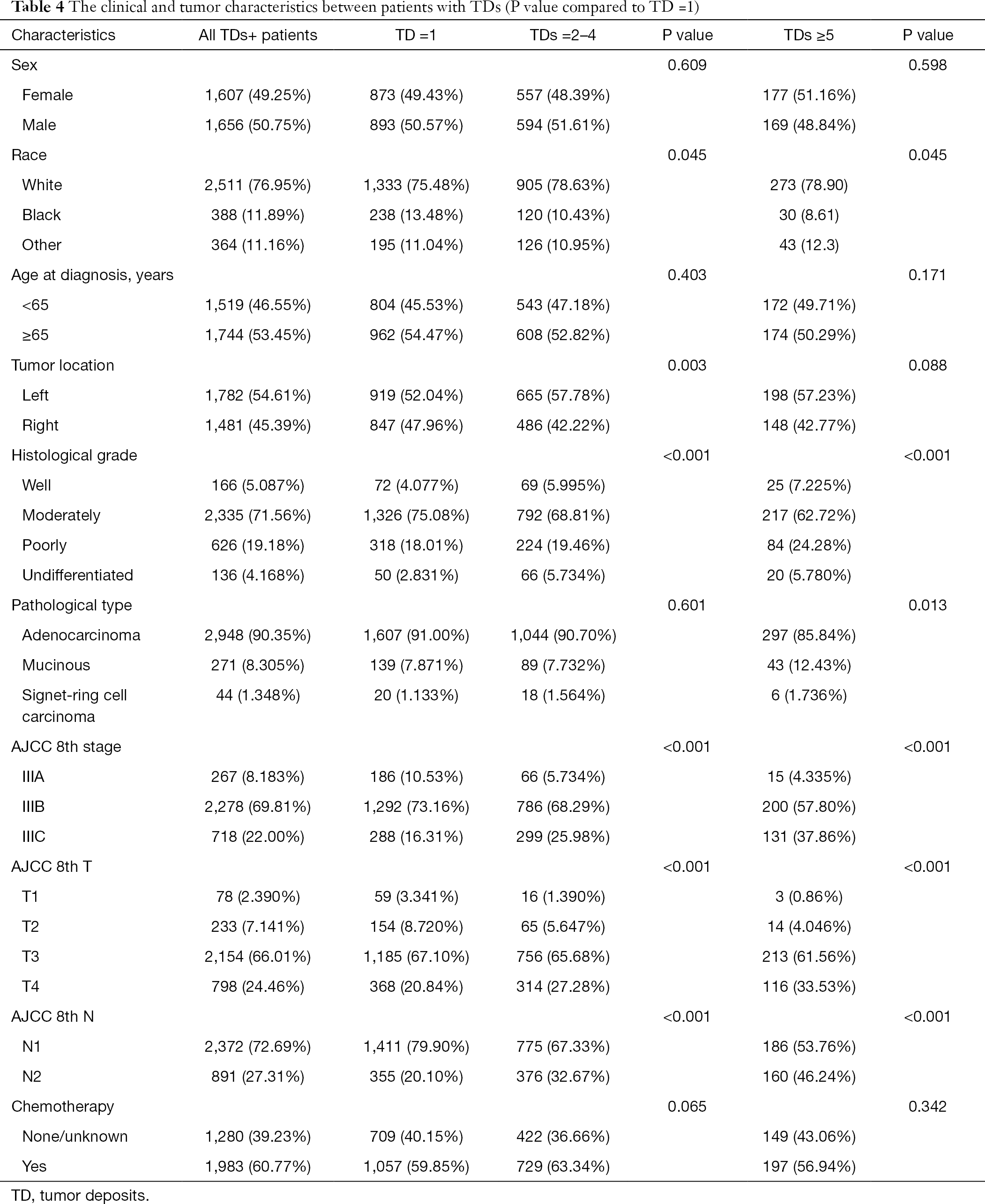 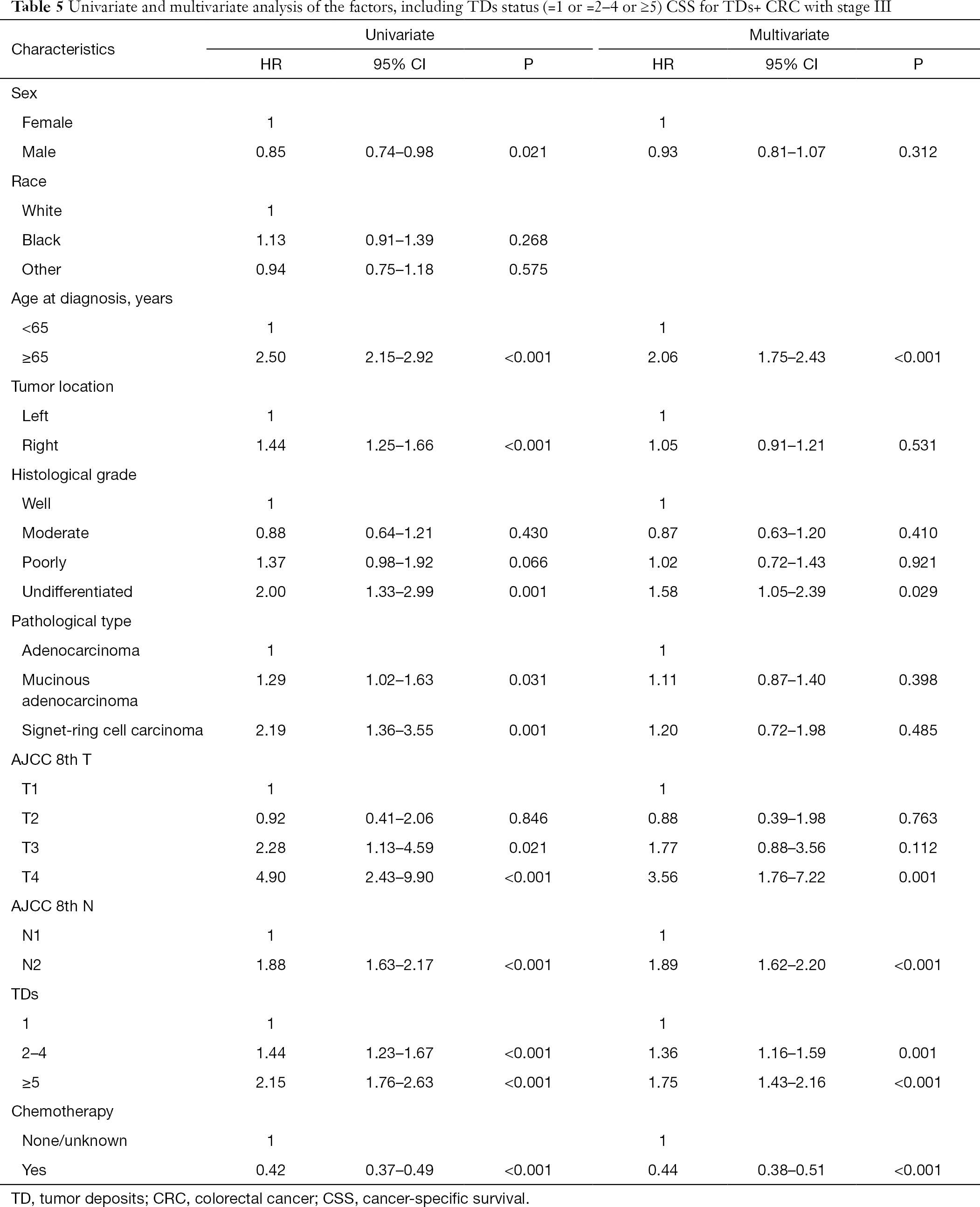 Table 5 Univariate and multivariate analysis of the factors, including TDs status (=1 or =2–4 or ≥5) CSS for TDs+ CRC with stage III
Full table

In the current study, we used the SEER database to investigate the role of TDs and the number of TDs in stage III CRC. The large sample size and good representativeness of the United States patient population further improve the statistical reliability of our study and the universality of the results. In our population of stage III CRC patients, the incidence of TDs was 15.31%. CRC patients with TDs had significantly poor CSS rates, consistent with previous studies (11,12). The presence of both TDs and lymph nodes were associated with a worse prognosis than the presence of either TDs or lymph nodes alone. Additionally, our multivariable models confirmed the independent prognostic value of the number of TDs (=1/2–4/≥5) in stage III CRC patients.

Based on the anatomy of the TNM staging system, the concept of prognosis and predictors was introduced into the AJCC 7th edition CRC staging system (9). It was proposed that positive circumcision margins, lymphatic vessel infiltration, peripheral nerve infiltration and TDs could be assessed (13). The AJCC 8th edition staging system promotes the “prognosis and prediction” of CRC. On the basis of further refinement of the anatomy of TNM stage, an improved measurement system was introduced: the “prognosis and prediction” of nonanatomic factors based on histopathology and gene detection. The system also includes TDs; the serum CEA level and tumor regression score; circumcision margins; vascular lymphatic vessel infiltration; peripheral nerve infiltration; a microsatellite unstable state; the KRAS, NRAS and BRAF gene states; and the recommended level of evidence.

In the AJCC 8th edition staging system, the T stage was not updated; regarding the N stage, the definition of TDs was restated with level II evidence. TDs indicate the presence of lymphatic drainage in primary tumors or isolated tumor nodes in the region (within the adipose tissue of the mesocolon and mesorectum). Most TDs originate from vascular lymphatic invasion.

Song (18) classified cancer nodules as a new stage (nPN) after lymph node metastasis was included in the statistics, and nPN was superior to the AJCC 7th edition staging system stage in assessing patient prognosis. Ueno et al. (19) examined extraintestinal cancer nodules in a total of 3,958 patients and showed that the classification of cancerous nodules (irrespective of shape) into N stages could simplify tumor staging criteria, enhance the objectivity of the prognostic assessment prognosis, and increase the accuracy of the prognostic assessment. Ueno et al. (20) demonstrated that a high number of ≥5 TDs was correlated with poor survival. The same study also suggested that TDs and node-positive disease showed similar survival rates. Therefore, the AJCC 8th edition staging system recommended evaluating the number of TDs, specifically 1–4 TDs or ≥5 TDs. In our study, we focused on stage III CRC patients with TDs, and 1 was the best cutoff for the number of TDs, which may be because we excluded factors such as neoadjuvant chemotherapy and targeted only patients with the pathological staging of the lymph nodes. Using X-Tile, we also found that, ≥5 TDs could be used to distinguish the prognosis of patients with TDs. Multiple metastatic pathways in tumors will result in wide tumor spread. TDs numbers had been identified as significant independent factors in univariate/multivariate. This is the first nomogram model to consider the prognostic implication of the number of tumor deposits. We can use this nomogram model to predict prognosis risk after surgery. Patients with high risk can receive more aggressive treatment.

The current research has some limitations. The research is only based on the data of SEER from 2010 to 2015. The ethnic type is mainly white, and it needs to be verified by a large sample of multi-centers.

The number of TDs has predictive value for the prognosis of stage III CRC patients. The presence of TDs and the number of TDs should be considered when making treatment decisions.

The authors would like to thank the Surveillance, Epidemiology, and End Results (SEER) Program tumor registries in the creation of the SEER database.

Funding: This work was supported by grants from the National Natural Science Foundation of China (No. 81872481), Zhejiang Basic Public Welfare Research Project (LGF18H160040 to RB) and the Key Disciplines of Chinese Medicine (Integrated Traditional Chinese and Western Medicine) in Zhejiang Province during the Thirteenth Five-year Plan (2017-XK-A40).

Reporting Checklist: The authors have completed the TRIPOD reporting checklist. Available at http://dx.doi.org/10.21037/atm-20-4728

Conflicts of Interest: All authors have completed the ICMJE uniform disclosure form (available at http://dx.doi.org/10.21037/atm-20-4728). The authors have no conflicts of interest to declare.

Ethical Statement: The authors are accountable for all aspects of the work in ensuring that questions related to the accuracy or integrity of any part of the work are appropriately investigated and resolved. The study was conducted in accordance with the Declaration of Helsinki (as revised in 2013). This study used previously collected deidentified data. The need for informed consent had been waived due to the retrospective nature of the study, and the study was deemed exempt from review by the Ethics Committee of the Second Affiliated Hospital of Zhejiang University School of Medicine.