Esophageal squamous cell carcinoma (ESCC) represents 90% of esophageal cancers in China and is a highly aggressive digestive tract tumor that is associated with a poor prognosis due to early lymph node (LN) and distant metastases (1-4). The incidence of esophageal cancer was estimated at 572,034 cases in 2018 globally, with 508,585 deaths (5). Although esophagectomy has a curative effect, it carries significant morbidity and mortality risks. Not surprisingly, LN dissection plays an important role in the staging and radical treatment of esophageal cancer owing to the prognostic relevance of LN metastasis (1,6). In esophageal cancer, LN metastasis, even at the early tumor invasion (T stages), indicates poor prognosis (1-4). In addition, regardless of the depth of T stage, postoperative regional LN metastasis is associated with a dismal 5-year survival rate of 7% (7).

Therefore, safe and thorough LN dissection in esophageal cancer can reduce local tumor recurrence, prolong patient survival, and achieve accurate pathological staging (8-10). As to the lymphadenectomy of esophageal cancer, the concept of total mesenteric excision (TME) has been proposed, and the core of TME is dissection of the left recurrent laryngeal nerve (RLN) LNs (11). Mediastinal LNs, especially left RLN LNs, are the most frequent sites of metastasis in esophageal cancer (12,13). Dissection of left RLN LNs by open esophagectomy has a high risk of injury that can lead to hoarseness, pneumonia, and even death (13). Although endoscopy-assisted surgery and Da Vinci robot-assisted minimally invasive esophagectomy (MIE) has significantly eased the dissection of left RLN LNs, it is still associated with considerable risks and complications (14). Therefore, the identification of risk factors for left RLN LN metastasis has important guiding significance for whether the left RLN LNs should be dissected.

Preoperative contrast-enhanced computed tomography (CT) is routinely used to assess LN metastasis, which not only determines clinical staging in esophageal cancer (15,16), but is also critical for optimal LN dissection (16,17). However, there is currently no diagnostic standard to assess whether a given left RLN LN is metastatic or not on CT images. Many surgeons believe that superior mediastinal LNs > 1 cm in diameter must be dissected (18), this criterion is empirical, and other factors might need to be considered.

Therefore, the aim of this study was to explore the predictive factors of left RLN LN metastasis in patients with ESCC and use CT examination to assess which LNs must be dissected during Da Vinci robot-assisted and thoracic laparoscopic video-assisted McKeown MIE (19).

We present the following article in accordance with the STARD reporting checklist (available at http://dx.doi.org/10.21037/atm-21-377).

This was a retrospective study of patients who underwent McKeown MIE at Tianjin Medical University Cancer Institute and Hospital from January 2016 to December 2019. All procedures performed in this study involving human participants were in accordance with the Declaration of Helsinki (as revised in 2013). The study was approved by the Ethics Committee of Tianjin Medical University Cancer Institute and Hospital (No. Bc2020176). The requirement for informed content was waived due to the retrospective nature of the study. 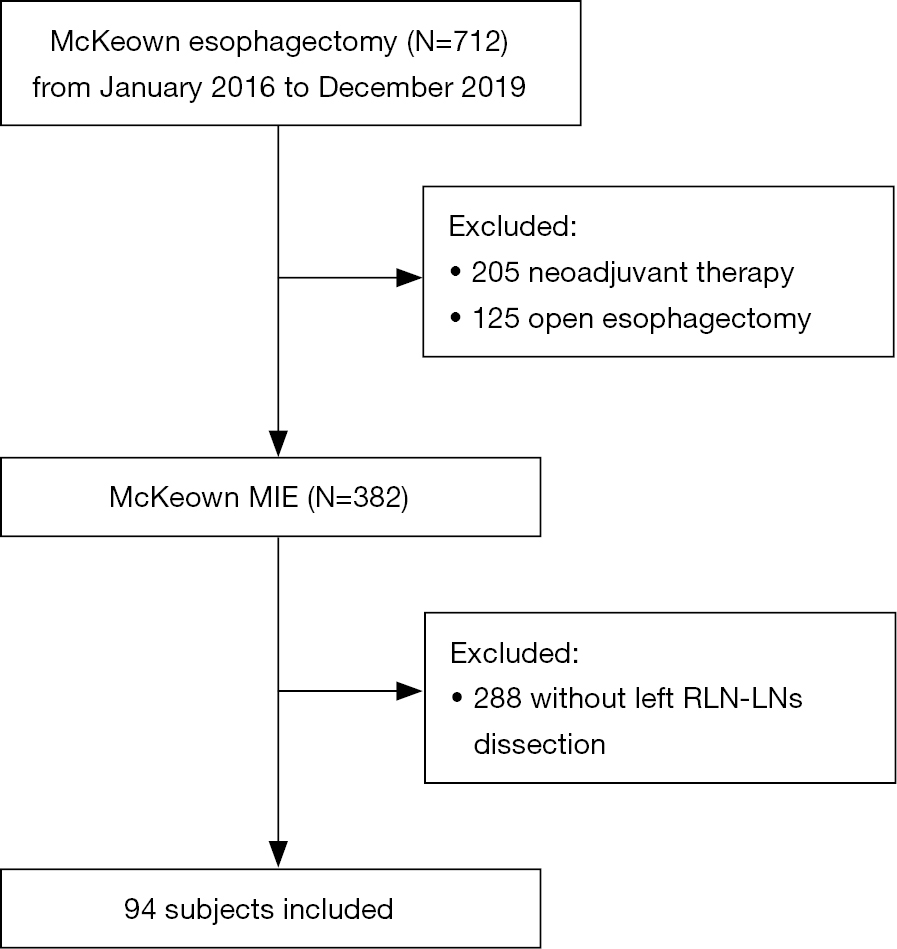 All participants underwent a CT scan (Brilliance 64 CT scanner; Philips Medical Systems, Best, Netherlands) of the chest and upper abdomen with intravenous contrast within 1 week before surgery. The scanning parameters were tube voltage of 120 kV, tube current of 80,150 mA, collimation of 64×0.625 mm, pitch of 1.375, slice thickness of 5 mm, reconstruction slice thickness of 1 mm, and slice spacing of 0.8 mm. For enhanced scanning, 60–100 mL of non-ionic contrast agent (Onipex (Omnipaque,GE Healthcare Ireland Limited, Ireland) 300 mgI/mL) was administered by the bolus injection method through the elbow vein, at a rate of 2.0–3.0 mL/s, and the scan was started following a 30 s pause after injection. The original data was reconstructed to a layer thickness of 1.25 mm and a layer interval of 1.00 mm to perform image processing and analysis. For the left RLN-LNs, the most typical (the largest and well-demarcated LN) was selected and measured by 2 experienced radiologists (>10 years of work experience).

The resected primary tumor and LN specimens were fixed and stained with hematoxylin and eosin and examined by 2 pathologists with >10 years of work experience. The participants with at least 1 LN pathologically diagnosed as squamous cell carcinoma metastasis among the resected left RLNLNs were grouped as the LN-positive group. The others were grouped as the LN-negative group. The lymph node metastasis rate (LNMR) was defined as the proportion of participants with positive LN metastasis. The lymph node positive rate (LNPR) was defined as the ratio of the number of metastasis-positive LNs to the total number of LNs removed.

The left RLN runs through a cylinder-like region including soft tissues and LNs surrounded by the esophagus, main trachea, left common carotid artery, left subclavian artery, and the thoracic duct (Figure S1A) (20). The esophagus-mobilized retraction method was used to dissect the left RLN LNs (13). The participants were anesthetized with a single lumen cannula to allow slight rotation of the trachea in order to visualize the left paratracheal groove. After mobilizing the esophagus, it was retracted to the right with a loop through the trocar port and fixed at the third intercostal space in the midaxillary line (Figure S1B). The trachea was rotated slightly to the right with a 5-lobed liver retractor to fully expose the left RLN region (Figure S1B). The soft tissues at the corner of the main trachea and the left main bronchus were first dissociated by electric hook, followed by the soft tissues along the main trachea up to the root of the neck at the lower thyroid or the lower thyroid artery. The pretracheal soft tissue was lifted in order to clearly expose the left RLN (Figure S1C). The beginning of the left RLN was visualized surrounding the aortic arch, and the soft tissues were hollowed out using forceps (Figure S1D). Finally, the soft tissues and LNs were dissected along the left RLN with an ultrasonic scalpel, scissors, or Maryland bipolar forceps to skeletonize the left RLN (Figure S1E,F). 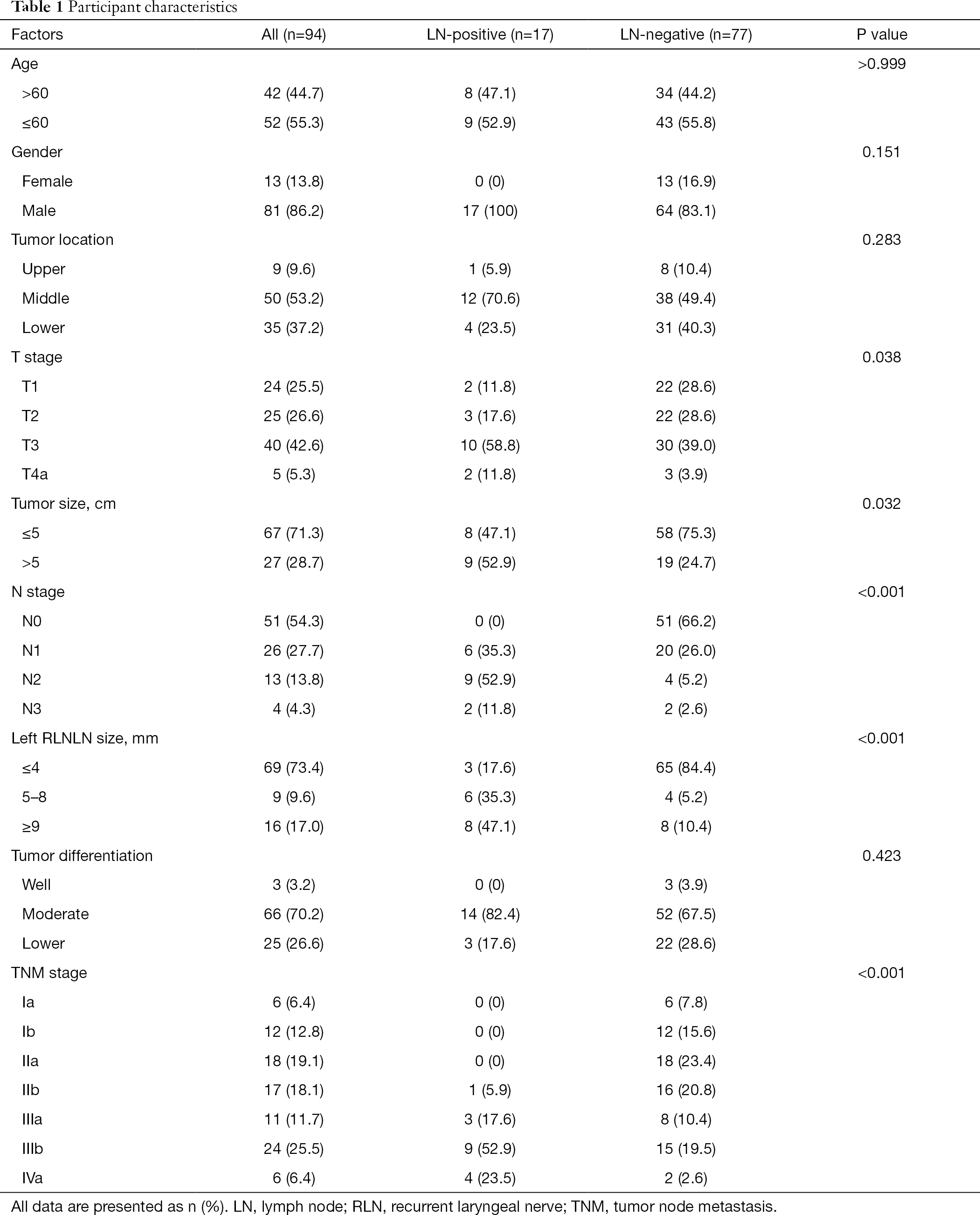 The LNMR among the thoracic ESCC patients was 45.7%, with 43 out of the 94 participants showing LN metastasis. A total of 2,505 LNs were removed, of which 129 were positive, indicating a 5.3% LNPR. Among them, 17 had LN metastasis of left RLN (LNMR 18.1%) (Table S1). In addition, 14 participants had LN metastasis of the right RLN (LNMR 14.9%), cardiac LNs were positive in 11 participants (LNMR 11.7%), and 13 had left gastric artery LN metastasis (LNMR 13.8%). Therefore, the LNMR of left RLN was the highest among all LNs (Table S1). In addition, 3 upper para-esophageal, 4 middle para-esophageal, 7 lower para-esophageal, 2 left main bronchus, and 1 splenic artery LN metastases were recorded among the 43 participants. No metastases were observed in the subcarinal, celiac artery, and hepatic artery LNs. Taken together, the metastatic LNs of esophageal cancer were mainly located next to the left and right RLN, peri-cardiac tissues, and left gastric artery (Table S1).

There were 6 cases with vocal cord paralysis (16.38%), 3 with anastomotic leakage (3.19%), and 10 with pulmonary infection (10.64%) after esophagectomy. No chylothorax and massive bleeding was reported. No deaths were recorded within 30 days of the operation. 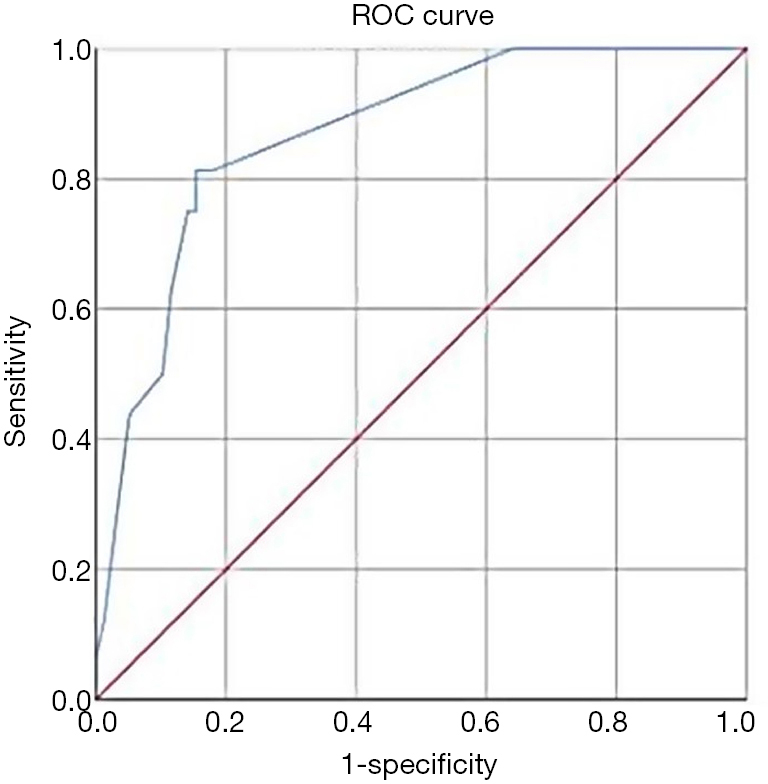 In this study, 2,505 LNs were removed from 94 ESCC participants during esophagectomy, which is similar to the mean of 24 RLN LNs per patient in a single-center study by van der Horst et al. (14) who shared a comparable level of surgery skill with us. This suggested that the lymphadenectomy method used at our hospital is comparable to that of other major institutions. Consistent with previous reports (17,23,24), the LNPR was 5.2%, and the LNMR was 45.7%, indicating fairly accurate LN dissection. Furthermore, the main sites of the LN metastases were the left and right RLN (18.1% and 14.9%, respectively), peri-cardiac tissues (11.7%), and left gastric artery (13.8%), with the highest LNMR in the left RLN. Therefore, dissection of the left RLN LNs is essential. Unfortunately, 288 patients had to be excluded because they did not undergo left RLN LN dissection, suggesting that many surgeons are conservative in the removal of LNs in this area.

As to the risk factors for left RLN LN metastasis, the univariable analyses showed that tumor size, LN size, T stage, N stage, and TNM stage were associated with positive RLN LNs, but that only the LN size was independently associated. Therefore, the size of the left RLN LNs probably plays an important role in predicting positive LNs. Using the ROC approach, the sensitivity and specificity of CT for diagnosing left RLN LN metastasis was optimal when the LNs were ≥5.5 mm in diameter. In the past, many surgeons believed that left RLN LNs>10 mm had to be dissected (18), and the data about positive LNs <10 mm are therefore mostly missing. Nevertheless, using the 10 mm cutoff point most likely leaves many positive RLN LNs in place, which would mean that many patients would undergo palliative resection rather than radical resection. According to the cutoff value of 5.5 mm, the diameter of the metastatic left RLN LNs in 5 patients were <5.5 mm (29.4%, 5/17); that of 7 patients were ≥10 mm (41.2%, 7/17), and that of 5 patients were 5.5–10 mm (29.4%, 5/17). Because more than 70% of the metastatic left RLN LNs were larger than 5.5 mm, it not nearly enough to only dissect left RLN LNs >10 mm. Nevertheless, positive LNs <5.5 mm are still observed, but considering the poor prognosis and short survival of ESCC, it is currently unknown whether leaving those small positive RLN LNs will affect patient survival, but it is possible that it will decrease the risk of complications. This requires examination in future studies.

Furthermore, no metastases were observed in the subcarinal, supradiaphragmatic, common hepatic artery, and celiac artery LNs in these 94 participants. Tang et al. also reported that subcarinal LN dissection was not beneficial and could be omitted in superficial ESCC (28). Therefore, surgical removal of LNs in these areas may be over-treatment. Studies are still necessary to demonstrate the benefits and harms of dissection of LNs in different compartments.

This study had some limitations. The number of participants was small, and they were from a single hospital. Because it was a retrospective study, a 1-to-1 comparison of each dissected LN to its initial CT image could not be performed. The results only suggest for now the possible predictive ability of the largest LN at CT to indicate the likelihood of finding at least one positive RLN LN. Finally, many patients were excluded because no RLN LNs were dissected. The results of this study will have to be confirmed through future multi-centered larger studies.

In conclusion, the size of the largest LN in left RLN area is an independent risk factor for metastasis in patients with ESCC. The results suggest that left RNL LNs > 5.5 mm on preoperative CT should be dissected.

Funding: This study was funded by the National Key Clinical Specialist Construction Programs of China (2013-544).

Reporting Checklist: The authors have completed the STARD reporting checklist. Available at http://dx.doi.org/10.21037/atm-21-377

Conflicts of Interest: All authors have completed the ICMJE uniform disclosure form (available at http://dx.doi.org/10.21037/atm-21-377). The authors have no conflicts of interest to declare.

Ethical Statement: The authors are accountable for all aspects of the work in ensuring that questions related to the accuracy or integrity of any part of the work are appropriately investigated and resolved. All procedures performed in this study involving human participants were in accordance with the Declaration of Helsinki (as revised in 2013). The study was approved by the Ethics Committee of Tianjin Medical University Cancer Institute and Hospital (No. Bc2020176). The requirement for informed content was waived due to the retrospective nature of the study.