Figure 1 is a picture including the authors of the article with other representatives of the ATSRG, a multidisciplinary team aimed at accomplishment and promotion of pioneering and comprehensive clinical investigations focused on awake and nonintubated thoracic surgery. 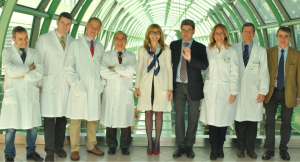 Adoption of video-assisted thoracoscopic surgery (VATS) for management of chest trauma and haemothorax is increasing (1) since it can obviate complications associated with thoracotomy and can be employed both for diagnostic or therapeutic purposes in patients with haemodynamic stability (2).

Recently, a number of VATS procedures are being increasingly performed by nonintubated or awake anesthesia in an attempt of minimizing at a further extent the overall surgical- and anesthesia-related traumas. However, so far the usefulness of awake VATS for urgent management of retained haemothorax has been scarcely investigated (3).

Having gained experience with elective awake VATS procedures performed in patients with poor respiratory function due to emphysema (4), interstitial lung disease (5) or pleural effusion (6), we have recently expanded its use to selected patients with retained haemothorax in whom simple chest drainage proved an unsuccessful treatment option leading to the development of acute respiratory failure.

A 33-year-old Caucasian male admitted due to acute abdominal pain with peritonitic signs underwent urgent laparotomy and duodenorraphy due to duodenal perforation of unknown origin. The postoperative course was complicated by complex abdominal infection requiring reopening of the skin incision and vacuum-assisted-closure (VAC) treatment; and bilateral pleural effusion. By a right-sided thoracentesis 500 cc of serous fluid were drained. Twelve hours later the patient complained of deteriorating dyspnea and anemia (Hb: 8.0 g/dL). A new chest X-ray showed the presence of massive pleural effusion on the right pleural cavity, which was treated by insertion of a chest tube resulting in evacuation of about 700 cc of blood.

Following an initial mild improvement the patient conditions deteriorated again within 24 h eventually resulting in respiratory failure with room air PaO2 of 38 mmHg. Repeated blood transfusions maintained Hb concentration to 8.8 g/dL. A chest computed tomography (CT) showed bilateral pleural effusion with a non-homogeneous pattern of density suggesting the presence abundant blood cloths in the right pleural cavity (Figure 2A,B). Due to rapidly deteriorating respiratory conditions and the concomitant sepsis, we decided to perform an urgent thoracoscopic exploration of the pleural cavity under sole local anesthesia. The patient was rapidly transferred from the radiology department to the operating room and was placed in a 30° semi-sitting position. Following injection of lidocaine 2% and bupivacaine 0.5% without sedation, a 5-mm 30°-angled camera was inserted through a single 3-cm long skin incision performed by slightly extending the pre-existent chest tube incision. A total of 1,500 mL of blood and cloths were progressively evacuated with the aid of repeated pleural irrigation. During the procedure the patient did not complain chest pain and was able to talk with the surgeons and breathe comfortably with an oxygen mask. No bleeding site could be identified intraoperatively. At the completion of the procedure which lasted 35 min, one chest tube was inserted in both pleural cavities and the right lung was re-expanded under camera vision, by keeping airtight the chest incision while inviting the patient to breathe more deeply and cough. The postoperative course was uneventful and during the follow-up, a chest CT scan performed at 1 month showed unremarkable findings (Figure 2C,D).

A 22-year-old patient was admitted at the emergency department following motor-cycle accident. He was conscious and tachipnoic at rest despite additional O2 delivery via a Venturi mask (FiO2: 50%). A chest CT scan showed multiple rib fractures and massive pleural effusion on the right haemothorax.

A chest drain was immediately inserted resulting in drainage of 600 mL of blood. Blood gases analysis demonstrated hypoxia (PaO2: 50 mmHg) and normocapnia. Twenty-four hours later the patient’s clinical conditions did not improve meaningfully and a new CT scan suggested the presence of blood cloths occupying 2/3 of the right pleural cavity. Room air blood gases showed a PaO2 of 45 mmHg and a PaCO2 of 40 mmHg and the patient complained of dyspnea at rest. It was decided to transfer him in the operating theatre and an awake VATS exploration was carried out. The clotted haemothorax was completely evacuated and once revised accurately the hemostasis no active bleeding site could be identified. After surgery the patient oxygenation improved immediately (Table 1) and he could be transferred to the ward. The postoperative course was uneventful and the patient was discharged 5 days after the operation. 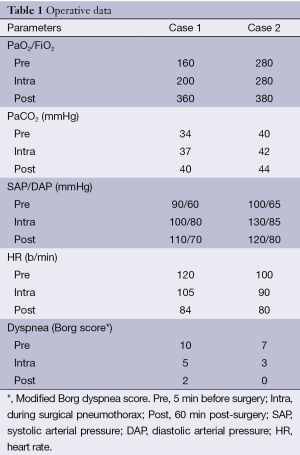 Haemothorax refers to a blood collection within the pleural cavity. The primary cause is sharp or blunt trauma to the chest whereas iatrogenic haemothorax due to thoracentesis occur rarely with a risk between 0.6% and 1% even in critically ill patients (7,8).

Awake VATS has been advocated as an optimal strategy to perform a number of thoracic surgery procedures. Optimal indications are still widely debated but patients with impaired respiratory function and associated co-morbidity are deemed amongst the ideal candidates (9).

To our knowledge this is the first report entailing urgent awake VATS management of clotted haemothorax. So far, Katlic and Facktor (3) only, reported on VATS performed in spontaneously ventilating patients with haemothorax although in this series unconscious sedation and standard 3-ports approach were employed. Moreover, in the Katlic’s series it is not mentioned whether these procedures were performed in an elective or urgent setting.

In our first patient, an iatrogenic haemothorax developing following a thoracentesis did not resolve by simple chest drainage probably due to progressive wedging of clots into the tube fenestrations that obstructed the tube and led to progressive tension haemothorax causing acute respiratory failure.

Overall, the short interval time between the onset of respiratory failure and surgical treatment in our two patients has been facilitated by the avoidance of general anesthesia with tracheal intubation underlining the usefulness of creation of fast track pathways that may accelerate lifesaving awake VATS procedures in selected instances.

In addition, we considered the awake anesthesia management as an optimal choice to avoid the need of intensive care unit (ICU) stay and risks of mechanical ventilation that may add meaningfully to the overall surgical risk, particularly in patients with multiple co-morbidity including respiratory failure and concomitant sepsis.

Alternative non-surgical treatment options include intrapleural instillation of urokinase, which has shown to resolve retained haemothorax in up to 92% of patients (10) but was deemed unsuitable to be employed in our two patients since urokinase treatment requires some days to be successful and we needed urgent treatment including exploration of the pleural cavity in search of an active bleeding.

Finally, use of single trocar VATS is currently under active scrutiny as an additional strategy aimed at further minimizing the overall invasiveness of awake VATS (11) and proved optimally suited for treatment of retained haemothorax under local anesthesia as shown by the complete lung re-expansion with no residual cloths observed in our patients 1 month after surgery. Single trocar access permitted us to use the pre-existing incision employed to insert the chest tube thus contributing to reduce potential postoperative chest pain triggering points.

In conclusion, awake VATS was quickly, safely and successfully accomplished according to a fast track path in two patients with retained haemothorax complicated by acute respiratory failure. Further detailed investigation is warranted to support our preliminary findings.

We thank Miss Aurora Pompeo for accomplishment of the ATSRG picture.