Concurrent chemoradiation (CRT) with high-dose cisplatin (HDC) (three cycles of 100 mg/m2 given once every 3 weeks) produces better locoregional control (LRC) and overall survival (OS) compared to radiotherapy (RT) alone in several randomized trials of head and neck cancer (HNC) (1-7). Compared to RT alone, however, CRT with HDC reports roughly 20–40% greater rate of high-grade toxicity that significantly deters up to 40% of patients from completing the aggressive treatment (3-8).

Multiple non-cisplatin based regimens have been tested but have not supplanted HDC (19-24). Induction chemotherapy (ICT), despite its efficacy compared to RT alone in larynx preservation (25,26) and reduction of distant metastases (1,4,25,26), does not improve survival compared to CRT alone (27,28).

In this study, we aimed to compare HNC patients treated with (I) ICT and CRT vs. CRT alone, (II) HDC- vs. LDC-based CRT, (III) HDC- vs. other chemotherapy-based CRT to determine whether there is a significant difference in OS and CSS.

We present the following article in accordance with the STROBE reporting checklist (available at http://dx.doi.org/10.21037/atm-20-5032).

An institutional database of HNC patients treated with definitive or post-operative CRT between 2003 and 2017 at Roswell Park Comprehensive Cancer Center was retrospectively reviewed. Patients who received CRT were included regardless of dosing schedule and chemotherapy agent; those who received RT alone or treatment with non-curative intent were excluded. Patients who received ICT followed by CRT were included; those who received ICT alone or ICT with RT were excluded. Length of follow-up, for those still alive, was defined as length of time between date of diagnosis to last date of follow-up visit.

The study was conducted in accordance with the Declaration of Helsinki (as revised in 2013). The study was approved by the institutional review board of Roswell Park Comprehensive Cancer Center (EDR-103707) and individual consent for this retrospective analysis was waived.

Standard regimen of three-weekly HDC was concomitantly used to treat 283 patients (45%); weekly LDC (30–50 mg/m2 once weekly) was given to 189 patients (30%); 151 patients (24%) received other chemotherapy regimen which included weekly cetuximab, weekly carboplatin, platinum regimen not otherwise specified, and crossover to carboplatin or cetuximab. Total or mean cumulative dose in each cohort is unknown due to incomplete information in the database. Prior to matching, median OS for HDC cohort was 40.3 months (IQR, 26.2–63.5), LDC was 42.4 months (IQR, 19.8–78.4), and other chemotherapy was 37.9 months (IQR, 13.8–69.2). Taxane-based ICT was given to 70 patients (11%). Median OS before matching for this cohort was 34.6 months (IQR, 16.5–65.3). The baseline patient and treatment characteristics before matching are summarized in Table 1.

Chemoradiation with and without ICT 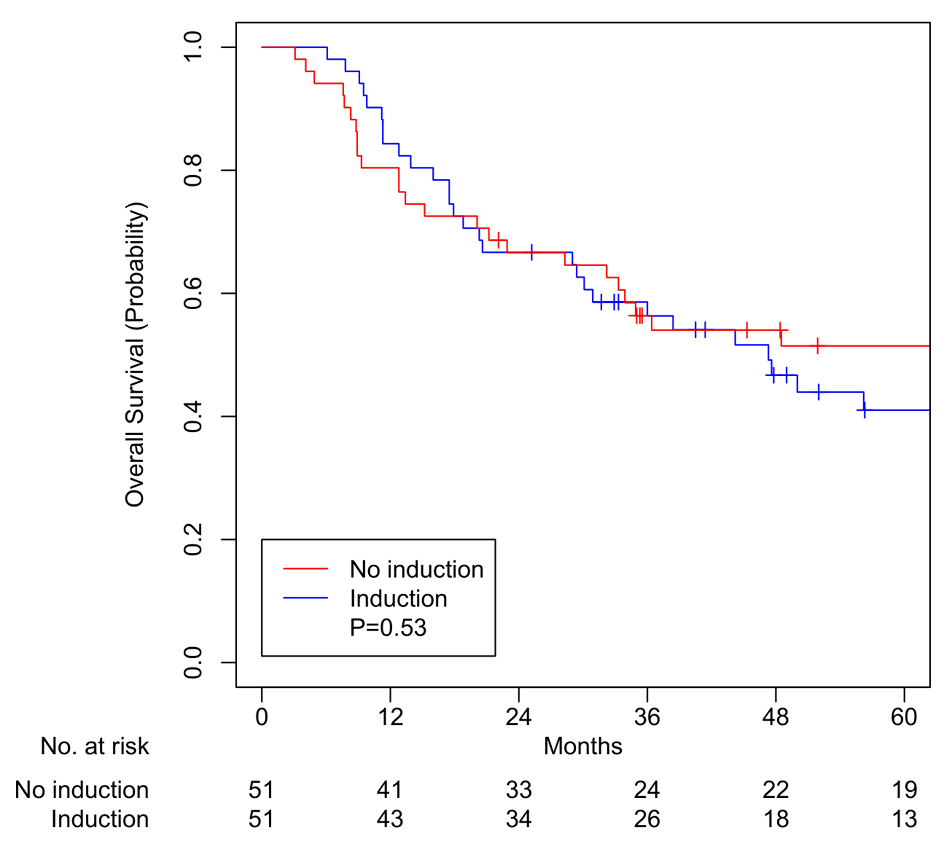 Figure 1 Overall survival for chemoradiation with vs. without induction after matching. 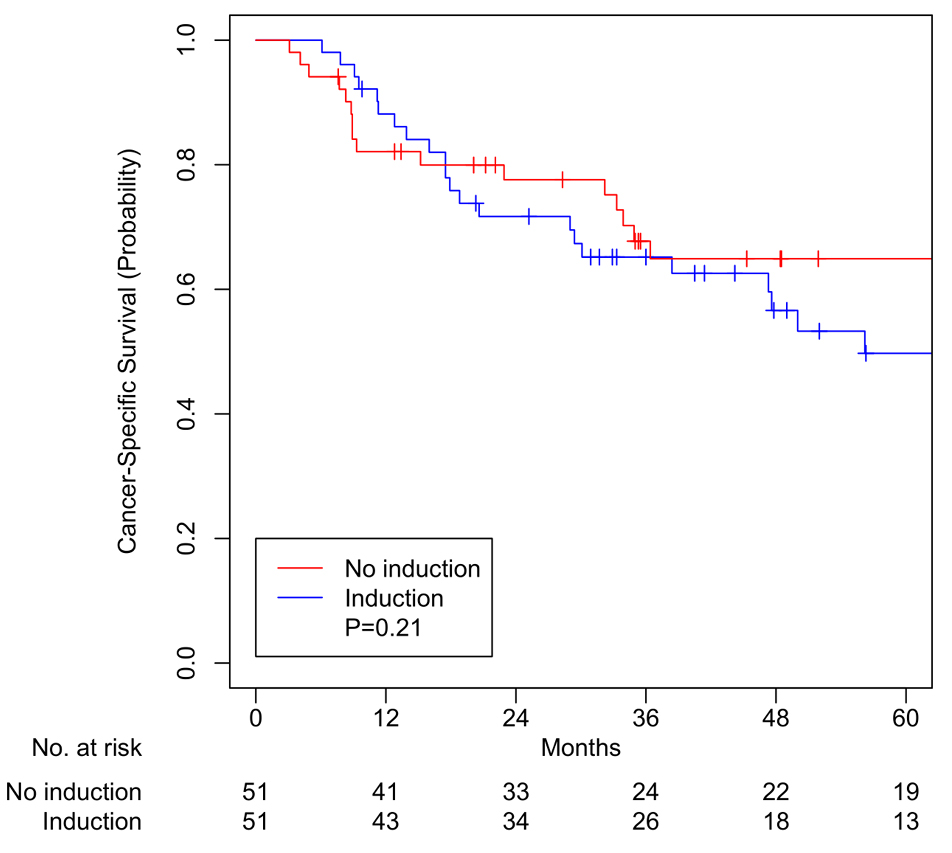 Figure 2 Cancer-specific survival for chemoradiation with vs. without induction after matching. 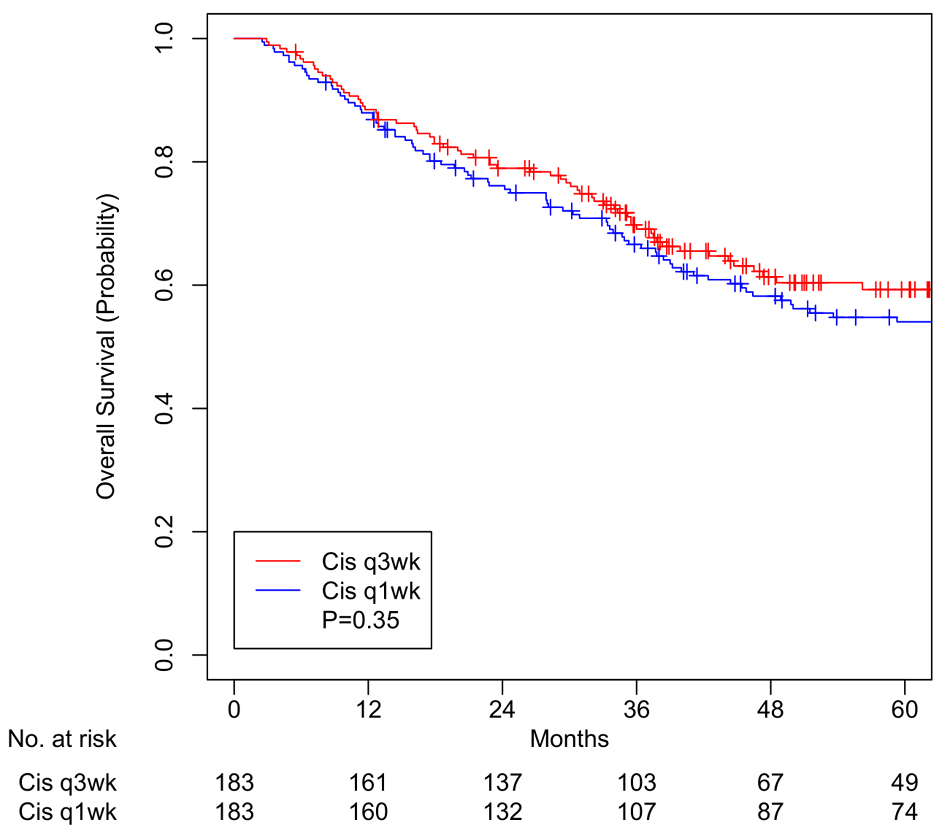 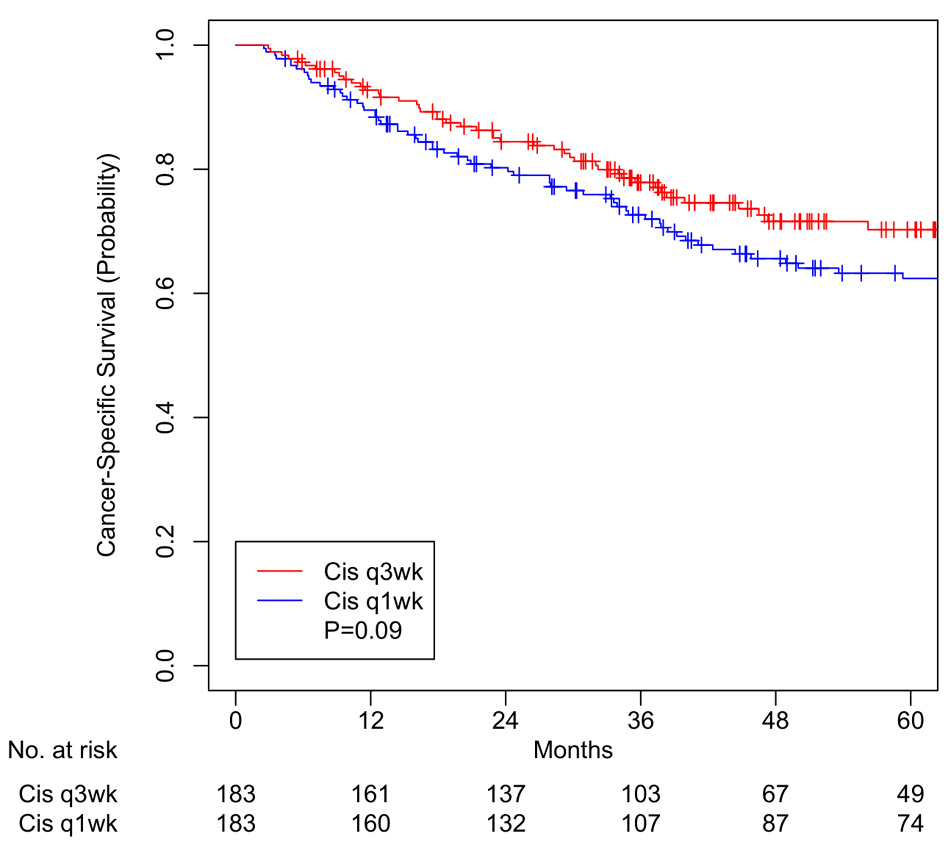 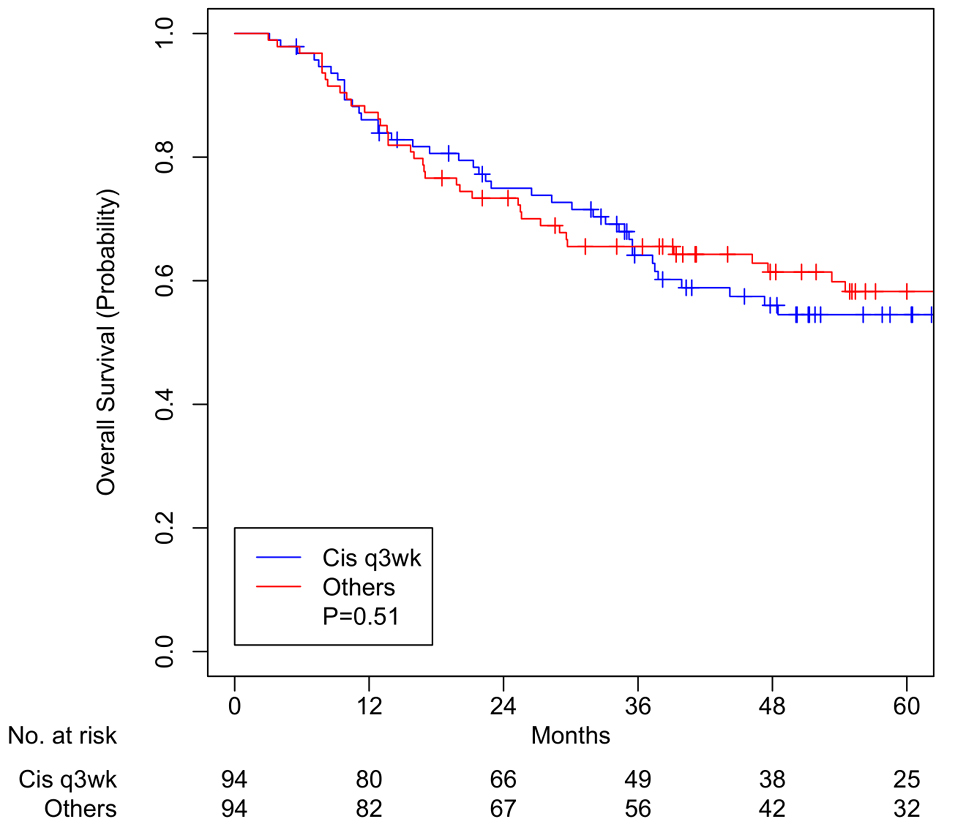 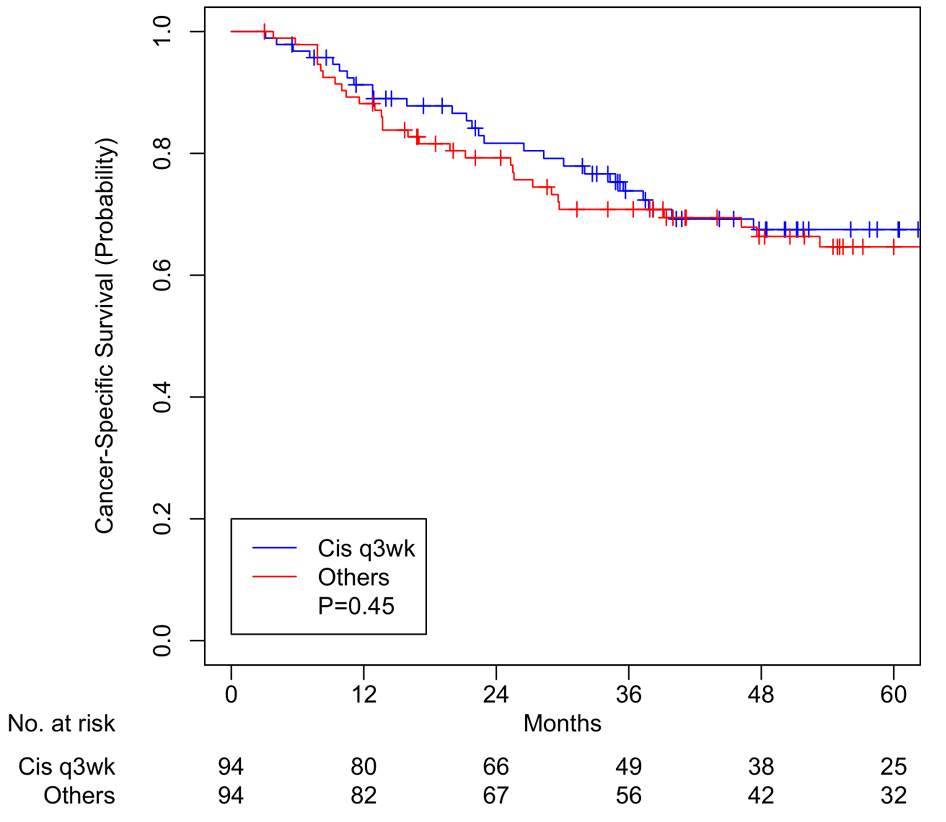 Analysis of well-balanced matched pairs of CRT regimens found: (I) ICT does not show to increase survival benefit of CRT alone, (II) HDC may not be the optimal dose as LDC shows insignificant difference in survival, and (III) non-cisplatin regimens fail to improve survival compared to HDC but may be an effective alternative for patients who are unfit to tolerate cisplatin. These findings are consistent with the literature.

Despite its potential to reduce tumor burden and assist in the administration of and patient selection for adjuvant therapy, ICT in treatment of HNC remains debatable with unproven advantage over standard-of-care with CRT alone (Tables 4-6). 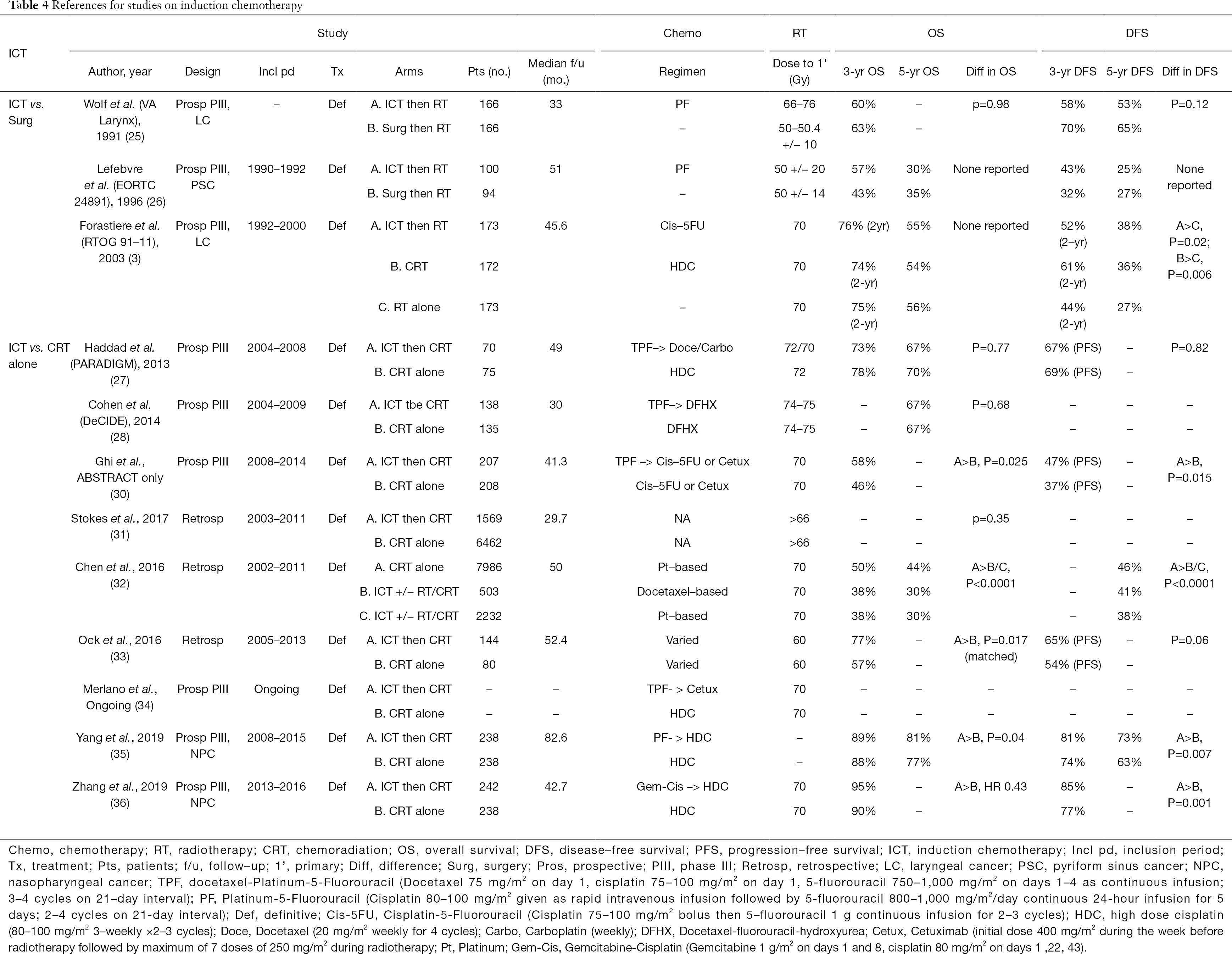 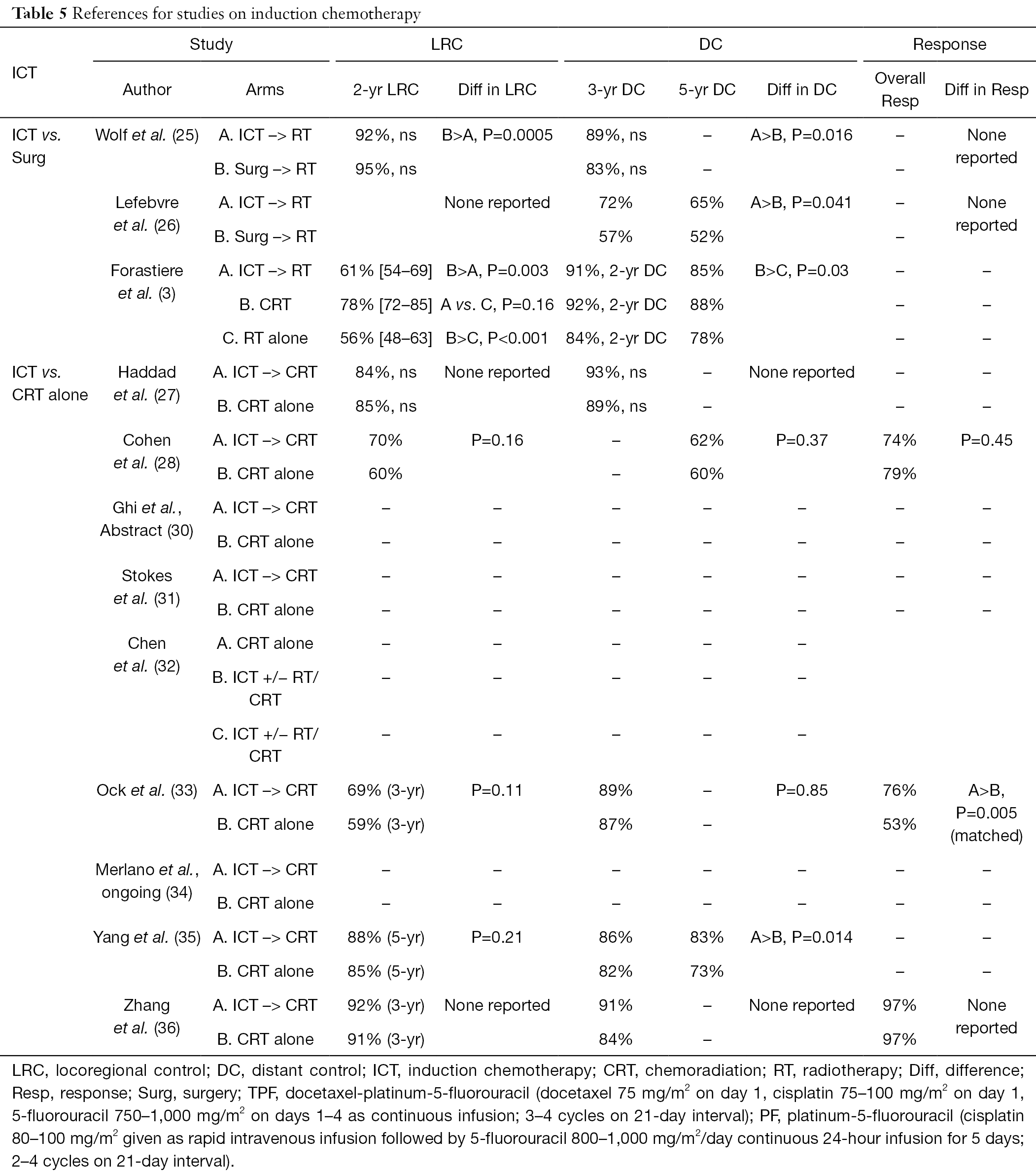 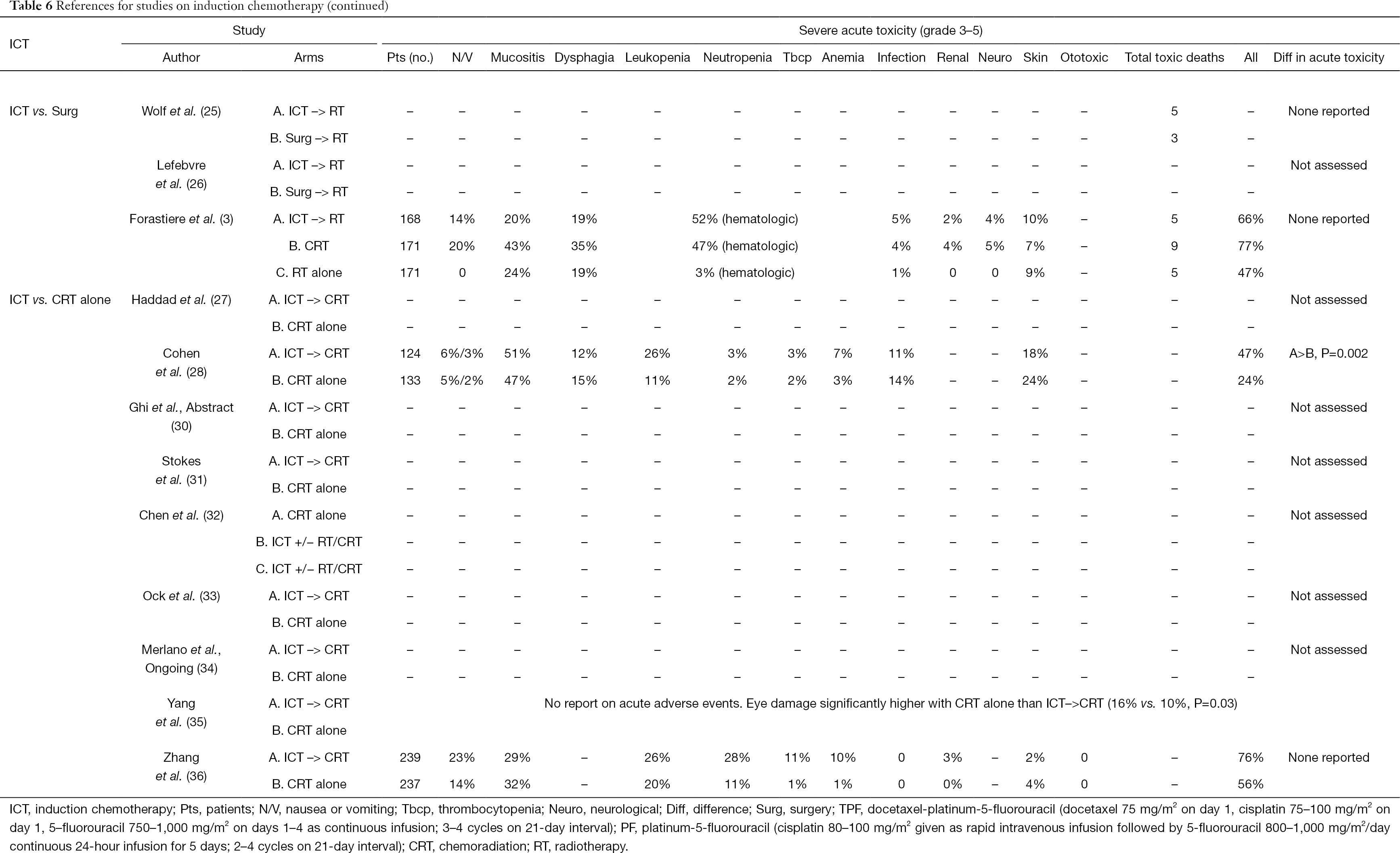 Three recent phase III randomized trials compared docetaxel, cisplatin, and 5-flurouracil (TPF) ICT followed by CRT against CRT alone in patients with locally advanced HNC (28,29,34). Two of these trials fell short of their target accrual (145 of targeted 330 patients in PARADIGM, 285 of targeted 400 patients in DeCIDE trial) and failed to show significant difference in OS between the two arms (HR 1.09, 95% CI, 0.59–2.03, P=0.77 in PARADIGM; HR 0.91, 95% CI 0.59–1.41, P=0.70 in DeCIDE), and both showed 3-year OS rates over 20% higher than the expected 50–55% in the two arms (28,29). Although we reviewed a heterogeneous patient population including those with advanced as well as earlier stage disease and used taxane-based of ICT, analysis of our matched pairs supports the lack of improvement in survival with taxane-based induction before CRT. Similarly, a retrospective analysis of over 8,000 patients in the National Cancer Data Base (NCDB) by Stokes et al. reports that ICT does not offer significant survival advantage when compared to CRT alone (HR 0.96, 95% CI, 0.88–1.05, P=0.35) while making it more likely for patients to receive lower (<66 Gy) RT doses (P<0.01); subgroup analysis on advanced disease also did not show difference in survival with ICT (31). Chen et al. retrospectively analyzed over 10,000 HNC patients in Taiwan who were treated with either CRT alone or ICT (docetaxel- or platinum-based) preceding locoregional treatment and also showed superior survival rate (P<0.0001) with CRT alone (32).

With the possible exception of LA-NPC, routine use of ICT may not be advised given increased toxicity and no clear survival benefit. In our patients, we no longer routinely use ICT except: (I) on a clinical trial or (II) if required to achieve 30 days of smoking cessation in current smokers. Current smokers are known to have significantly reduced survivals that can be effectively ameliorated by 30 days of smoking cessation (37). This OS benefit justifies use of ICT; moreover, ICT allows initiation of treatment without significant delay from the time of diagnosis which can also reduce survival (38). 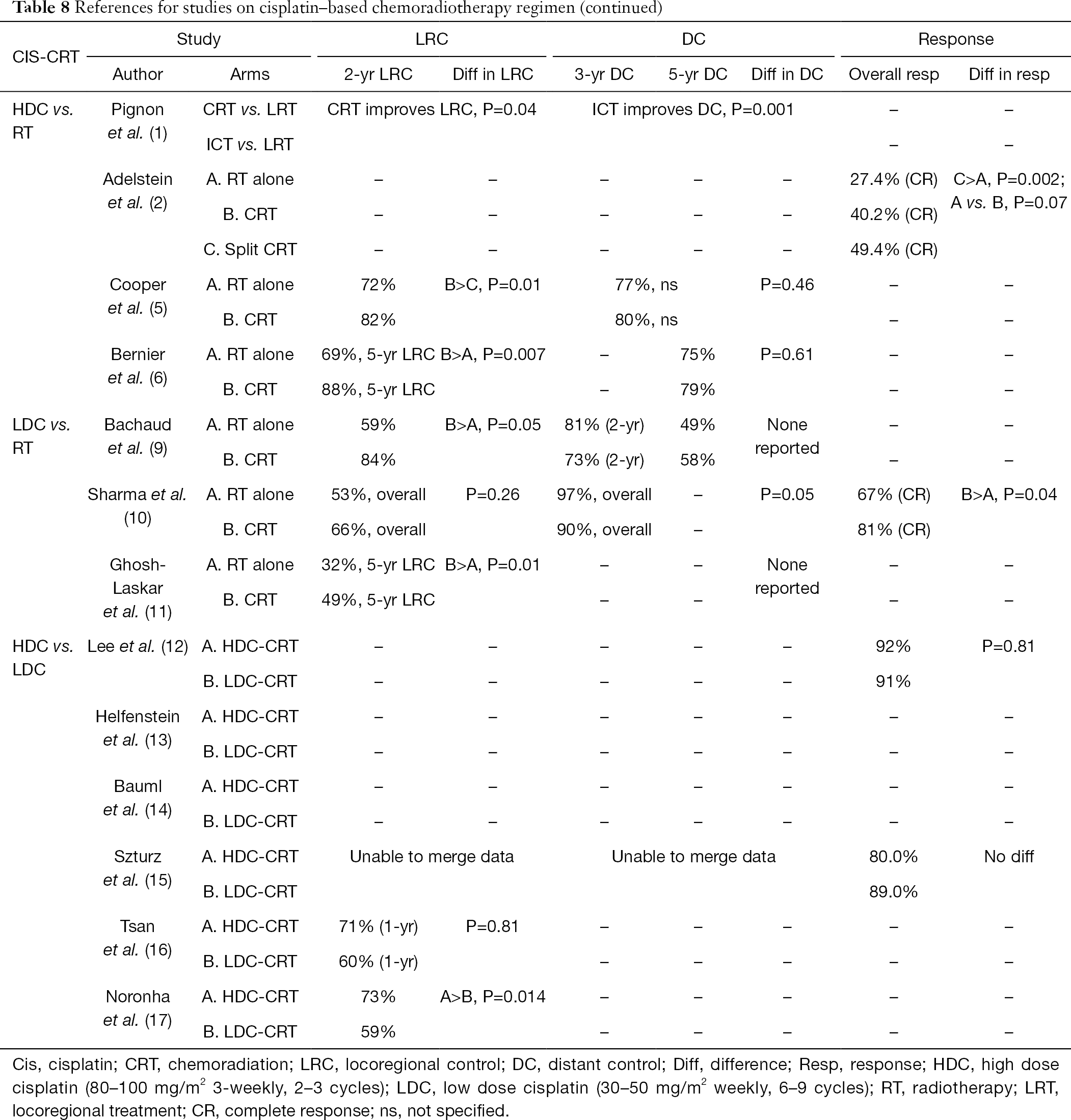 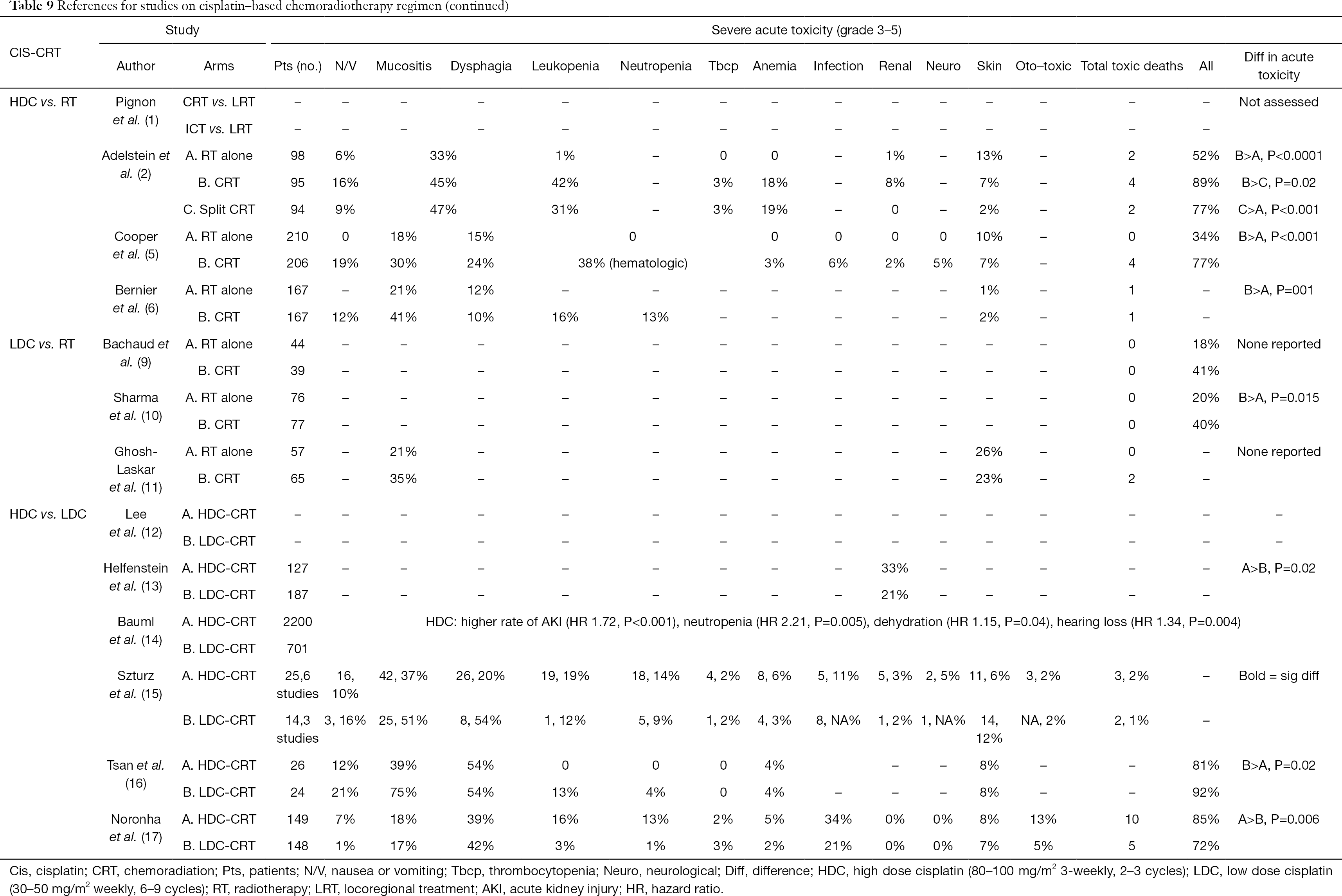 Szturz et al. in a meta-analysis of 59 prospective studies with over 5,200 locally advanced HNC patients found no significant difference in OS was observed between HDC- and LDC-CRT. In the definitive setting, LDC had greater compliance (88% vs. 71%, P=0.0017) and less toxicity such as myelosuppression (leukopenia P=0.0083, neutropenia P=0.0024), severe nephrotoxicity (P=0.01) and severe nausea and/or vomiting (P<0.0001) compared to HDC (15).

Our findings are consistent with those of Szturz et al.; LDC appears to be equivalent to HDC in terms of OS. Although in our study we controlled for adverse events such as hospitalizations and risk factors such as comorbidities to create matched pairs, we are aware that in the early years of this analysis many patients were given LDC specifically because they were felt to be unable to tolerate HDC. Thus, we suspect that there remained a bias that favored HDC despite our attempts to correct with match pairing. This may explain the non-significant decrease in CSS with LDC.

As shown in Tables 7-9, the majority of publications appear to reveal greater cisplatin-related toxicity with HDC than LDC. This warrants future study.

Non-platinum agents such as cetuximab (IgG1 monoclonal antibody against epidermal growth factor receptor) and other platinum agents such as carboplatin (second generation platinum drug) have been investigated (Tables 10-12). Two randomized phase III trials by Gillison et al. (RTOG 1016) and Mehanna et al. (De-ESCALATE) examined the outcome of cetuximab (400 mg/m2 loading dose then seven weekly 250 mg/m2 doses) versus HDC given concomitantly with RT (70 Gy in standard fractions over six weeks) used to treat patients with HPV-positive oropharyngeal cancer; both trials failed to demonstrate non-inferiority of cetuximab over cisplatin (19,20). RTOG 1016 showed that cetuximab neither met the non-inferiority criteria for OS (P=0.51) nor improved acute (P=0.16) or late (P=0.19) severe toxicity profile of cisplatin while exhibiting inferior 5-year progression-free survival (67.3% vs. 78.4%, P=0.0002). De-ESCALATE study also showed that cetuximab did not reduce overall severe toxicity (P=0.98) while showing worse 2-year OS (89.4% vs. 97.5%, P=0.001) and 2-year recurrence (16.1% vs. 6.0%, P=0.001) compared to cisplatin. Our non-cisplatin cohort included patients who received weekly cetuximab and those who received modified regimen of crossover to cetuximab, but we did not directly compare cisplatin- with cetuximab-based CRT in our retrospective review of a heterogeneous patient population. Although we showed that patients who received non-cisplatin regimen had no difference in OS with those who received cisplatin, this may be the result of including other platinum-based regimen in our non-cisplatin cohort. It appears safe to assume that cetuximab is neither less toxic nor equally as effective as cisplatin, which thus cannot be replaced in treating HPV-positive oropharyngeal cancer. 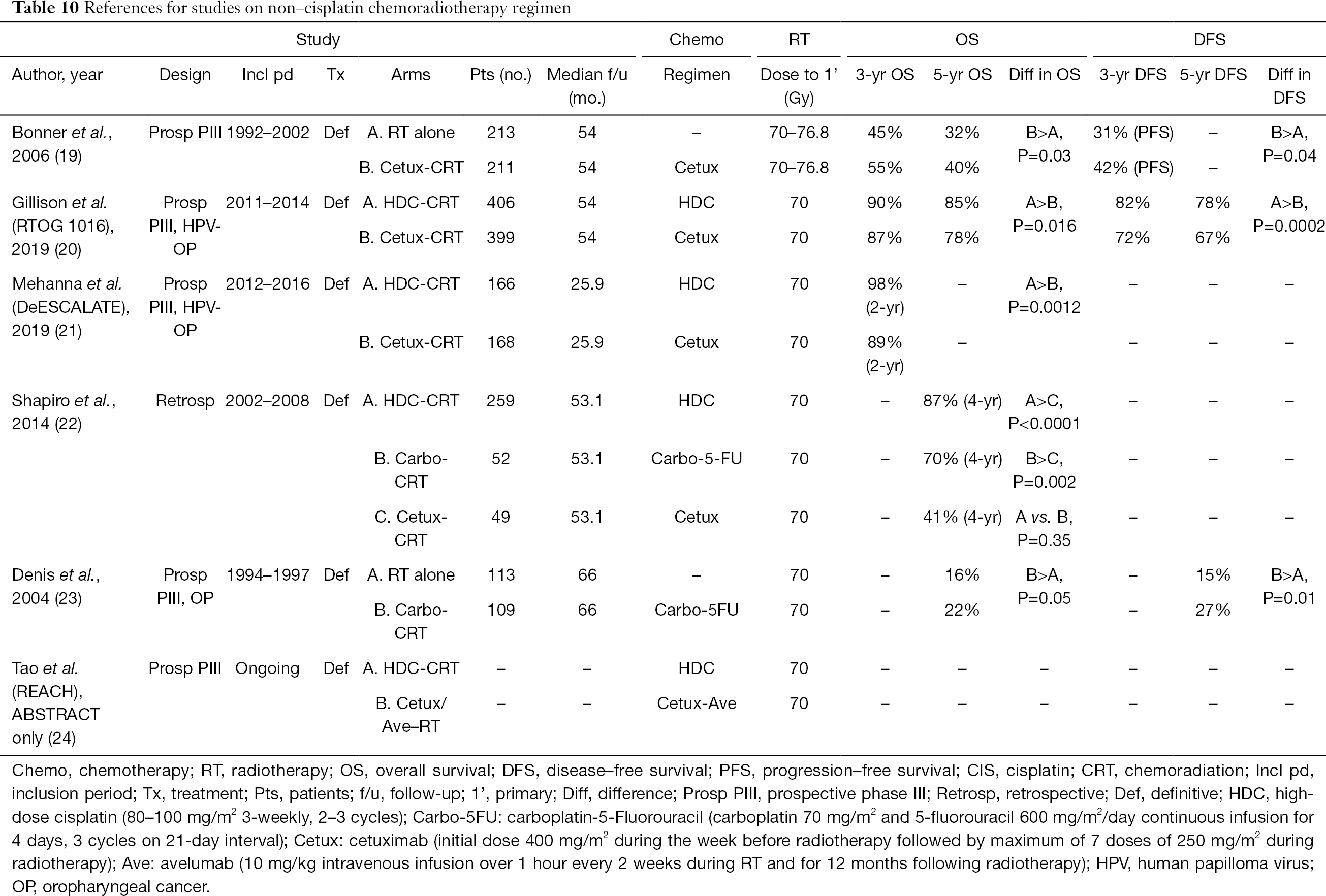 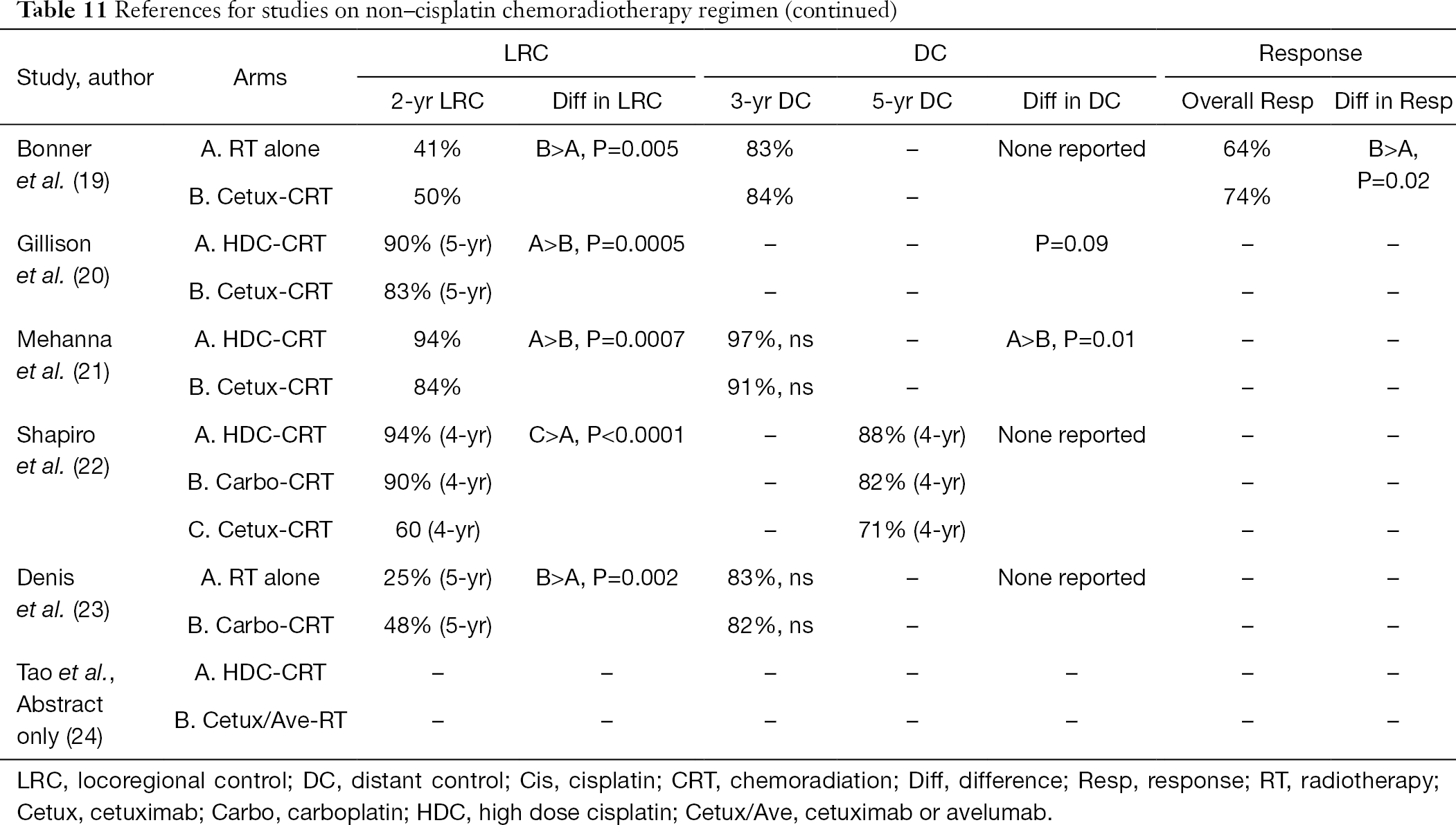 There is an unmet need for an alternative CRT regimen for patients who cannot tolerate or risk the sequelae of severe toxicity with cisplatin. Prospective studies on alternative chemotherapy schedules and agents as well as immune checkpoint inhibitors (23) are warranted.

Survivals in our cohort were similar regardless of use of ICT, LDC, or non-cisplatin regimens. In the absence of a clear survival benefit, we only use ICT on clinical trial or as a temporizing maneuver for a patient trying to quit smoking. Patients unable to tolerate HDC should know that their survival may not be significantly impacted.

The authors thank Adam Oberkircher PA and Kelsey Smith PA for their tireless efforts to provide excellent care of these patients.

Provenance and Peer Review: This article was commissioned by the Guest Editor (Dr. Mukund Seshadri) for the series “Head and Neck Cancers – Disease Biology, Diagnostics, Prevention and Management” published in Annals of Translational Medicine. The article has undergone external peer review.

Reporting Checklist: The authors have completed the STROBE reporting checklist. Available at http://dx.doi.org/10.21037/atm-20-5032

Conflicts of Interest: All authors have completed the ICMJE uniform disclosure form. (available at http://dx.doi.org/10.21037/atm-20-5032). The series “Head and Neck Cancers – Disease Biology, Diagnostics, Prevention and Management” was commissioned by the editorial office without any funding or sponsorship. The authors have no other conflicts of interest to declare.

Ethical Statement: The authors are accountable for all aspects of the work in ensuring that questions related to the accuracy or integrity of any part of the work are appropriately investigated and resolved. The study was conducted in accordance with the Declaration of Helsinki (as revised in 2013). The study was approved by the institutional review board of Roswell Park Comprehensive Cancer Center (EDR-103707) and individual consent for this retrospective analysis was waived.