Choledochojejunostomy (CJS) is one of the most commonly used basic procedures in biliary surgery and is also a method of biliary reconstruction after resection of pancreatic head carcinoma, ampullary carcinoma, duodenal papillary carcinoma, and other tumors (1-3). In recent years, with increases in the incidence of tumors worldwide (4), the use of CJS in the clinical setting has also increased. Choledoenterostomy has evolved into cholecystojejunostomy, choledochoduodenostomy, and CJS (5). Until recently, Roux-en-Y CJS has been the most commonly used CJS in the clinical setting. However, with the promotion and popularization of this technique, the follow-up problems associated with this procedure are becoming more apparent. Because t valve function in the sphincter of Oddi is inevitably depreciated in CJS, the bile duct is directly connected to the intestinal tract, which leads to the inevitable occurrence of bile reflux after surgery. Once the intestinal contents flow into the biliary tract, there is a risk of cholangitis; repeated cholangitis stimulation can cause scar tissue hyperplasia and eventually lead to CJS stricture and even cancer (6,7). According to the previously published studies, the anastomosis’s stenosis rate is as high as 13–58% 1 year after CJS (8-11). Once the anastomotic scar is formed, the effect of drug treatment will be limited, and reoperation or interventional stenting is the only effective treatment option (12). However, there is still a risk of anastomotic restenosis after retreatment. Patients with repeated biliary tract operations due to anastomotic stricture are often encountered in clinical practice. Therefore, the study of scar formation characteristics in CJS is of significance for preventing and treating CJS strictures. Nevertheless, there is still a lack of animal models of CJS suitable for basic research. In the present study, the rat Roux-en-Y CJS model was established for the first time further to analyze the characteristics of the scar formation of choledochojejunal anastomosis.

The study was performed under a project license (No. 2019-D.-304) granted by the Ethics Committee of Beijing Chaoyang Hospital and complied with the institutional guidelines for the care and use of animals.

Specific Pathogen Free (SPF)-grade male Sprague-Dawley (SD) rats aged 6–8 weeks and weighing about 250 g were selected for the present study. The experimental animals were purchased from Beijing Weitong Lihua Animal Experimental (Beijing, China), and were housed at the Medical Research Center of Beijing Chaoyang Hospital (Beijing, China) at normal room temperature with standard chow. The circadian rhythm of the rats was monitored for 12 h.

The rats fasted (including no access to water) for 6 h before surgery. Surgical anesthesia was performed by an intraperitoneal injection of chloral hydrate (0.5 mL/100 g). After completing the operation, the rats were put into a 37° rewarming table to recover from anesthesia. The rats were not given water for another 12 h after the operation, and normal feeding was resumed after 12 h. All the rats were killed by inferior vena cava bloodletting after the tissue was obtained by laparotomy. All operations were in line with the ethical principles of laboratory animal welfare and approved by the Ethical member Association of Beijing Chaoyang Hospital affiliated to Capital Medical University. 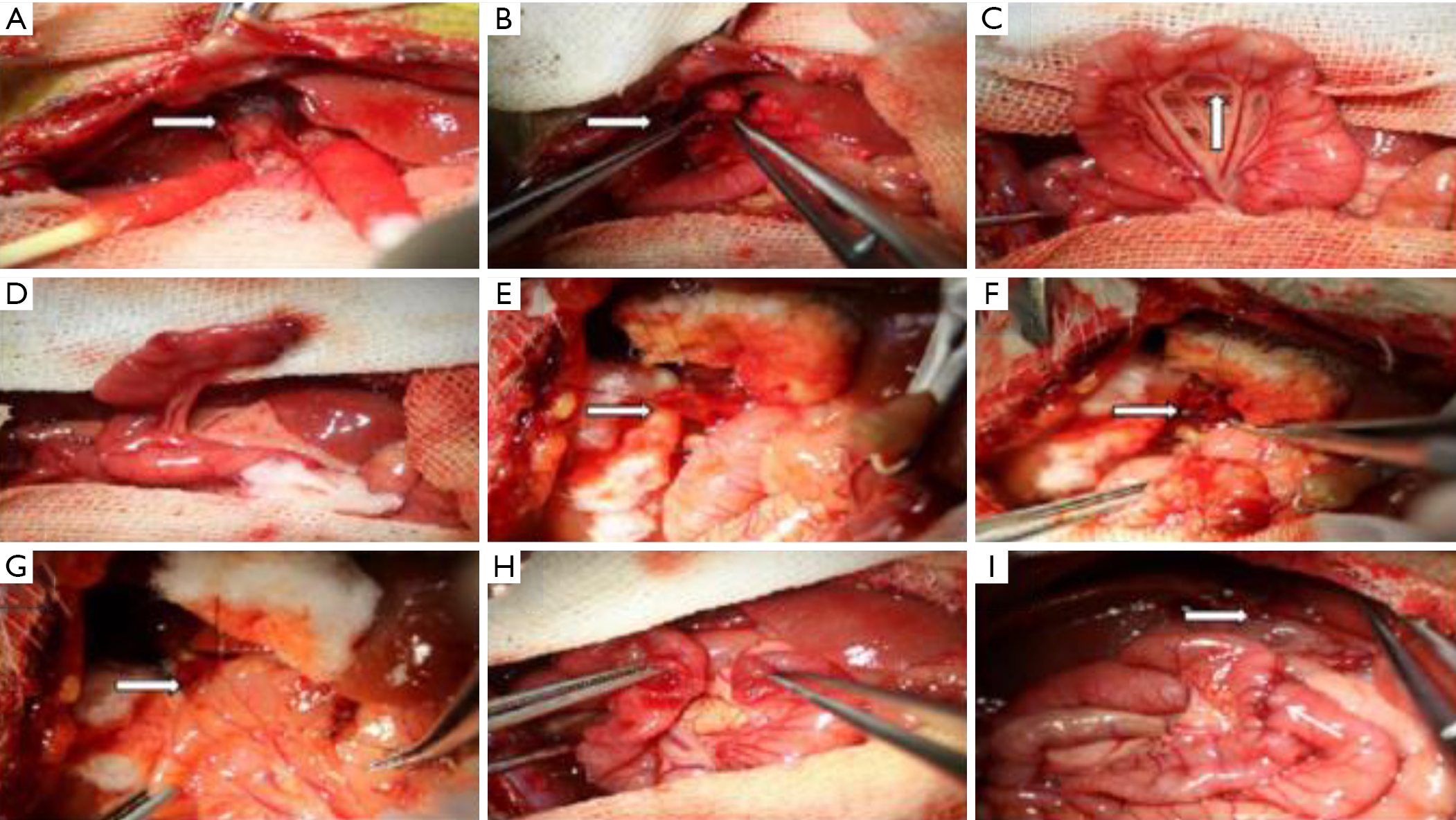 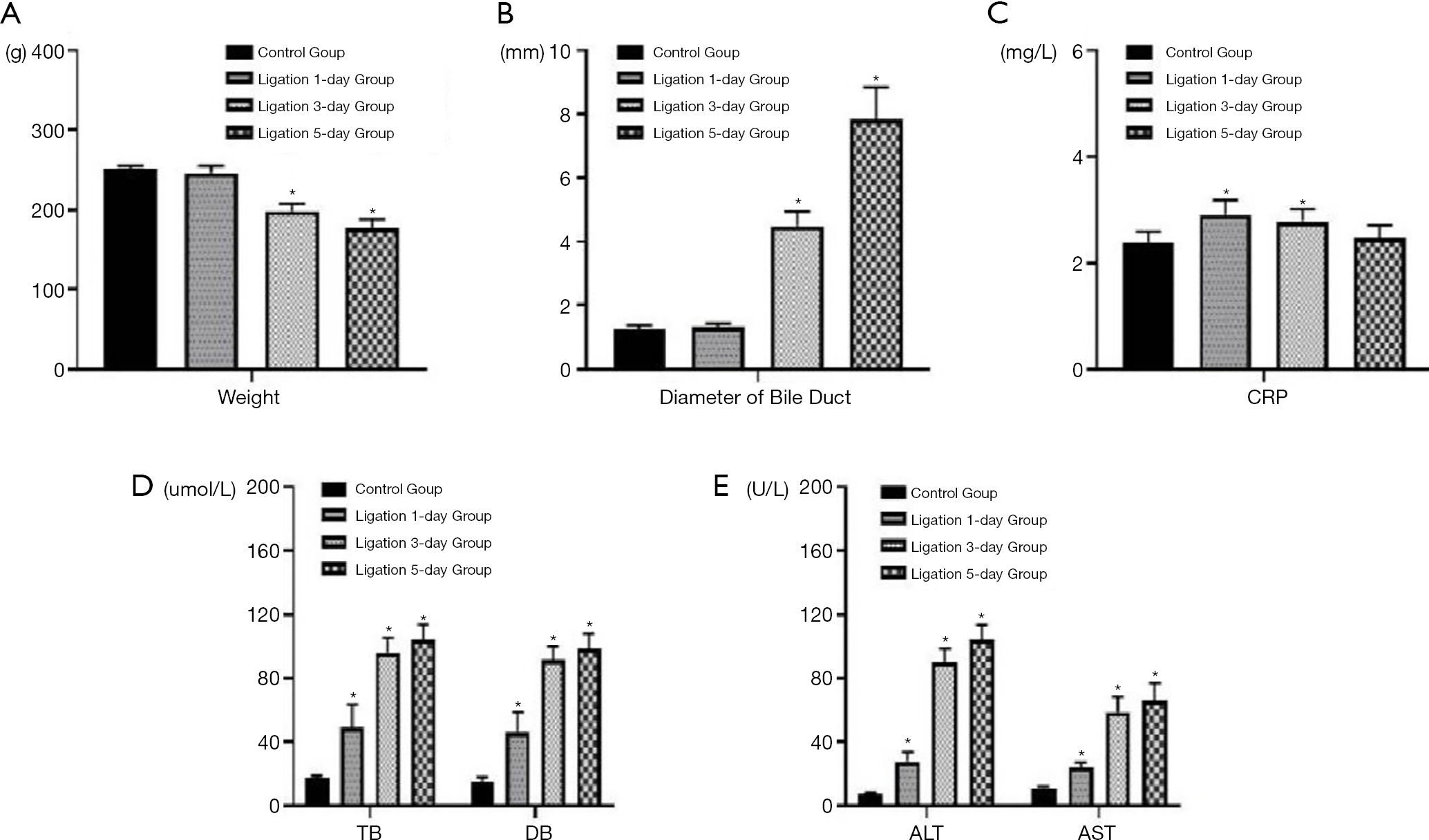 Indexes of rats after Roux-en-Y CJS

Figure 6 Changes of weight, common bile duct diameter and laboratory indexes in rats at different time points after Roux-en-Y choledochojejunostomy (* refers to the comparison with the control group, P<0.05). 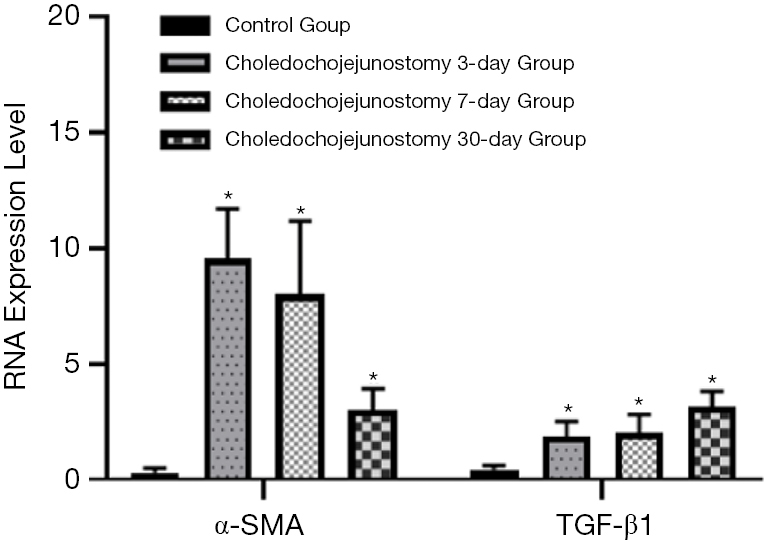 Figure 9 Changes of α-SMA & TGF-β1 expression in the anastomotic stoma at different time points after Roux-en-Y choledochojejunostomy (* refers to the comparison with the control group, P<0.05).

The reconstruction of the bile outflow tract is a basic technique in biliary surgery (13,14). In 1887, Monastyski first reported cholecystojejunostomy, and the following year, Riedl pioneered choledochoduodenostomy. In 1893, César Roux designed a Roux-en-Y jejunal loop for gastrojejunostomy, later used in CJS to prevent intestinal fluid reflux (15). At present, Roux-en-Y CJS is the most commonly used method for bile duct reconstruction in the clinical setting (16,17). However, regardless of the type of CJS, because of the deprecation of the sphincter of Oddi, the problem of intestinal fluid reflux cannot be solved completely, and repeated cholangitis stimulation will cause scar tissue hyperplasia and eventually lead to anastomotic stricture, and even cancer (18-20). Therefore, determining the characteristics of scar formation in CJS is of significance for the prevention and treatment of CJS strictures.

Previous literature has indicated that most animal models used in CJS include large animals, such as rabbits, dogs, and pigs (21-24). Experiments with large animals are expensive, and there are problems associated with feeding and managing large animals. de Aro Braz et al. and Corbi et al. previously established a rat model of CJS to study the effect of related indexes of biliary cirrhosis after removal of biliary obstruction. However, the specific method of CJS was common bile duct duodenal anastomosis (25,26). However, at present, the anastomosis used in clinical work is Roux-en-Y CJS. To make the rat model more in line with the clinical characteristics, we improved based on the previous model and adopted the Roux-en-Y CJS. The Roux-en-Y CJS model in rats designed in the present study has the following advantages. First, it is a method of 2-stage operation; bile duct dilatation is caused by the model of primary obstruction, which is more in line with the characteristics of clinical patients. Second, Roux-en-Y CJS is adopted, which is more in line with the characteristics of clinical surgery. Third, rats’ feeding and management is relatively simple and does not require professional animal anesthesiologists and keepers’ cooperation. Fourth, the diameter of the bile duct in normal rats is about 1–2 mm, and can dilate to about 5 mm after 3 days of ligation, which can fully meet the needs of CJS. Fifth, CJS follows the clinical method of the continuous posterior wall and the intermittent anterior wall (27), and with practice, we can skillfully master the technique of CJS in rats. Finally, rats’ metabolism is fast, the feeding cycle is short, and the scar formation of CJS can be observed 1 month after the operation.

In the present study, we studied the physiological changes of the common bile duct in rats after ligation. We found that after ligation of the common bile duct, rats showed typical symptoms of obstructive jaundice, yellowing of hair and urine, weight loss, and dilatation of the common bile duct, with the prolongation of ligation time. Laboratory tests indicated that ALT, AST, TB, and DB indexes were significantly increased. We also found that on the third day after common bile duct ligation, the common bile duct diameter was dilated to 3–5 times, body weight was reduced by 20%, and the bilirubin increased by 5–8 times. Compared with other time points, the third day after common bile duct ligation is the best time point for Roux-en-Y CJS. We further investigated the physiological changes after CJS in rats and observe that, after CJS, biliary obstruction improved rapidly, body weight returned to normal levels 1 week after surgery. The ALT, AST, TB, and DB indexes returned to normal levels 1 month after the operation. However, the diameter of the anastomotic stoma in rats gradually developed cicatricial coarctation with time.

Pathophysiological change of scar formation is an extremely complex process and involves multi-tissue, multi-cell, multi-factor, and multi-component participation. It can be roughly divided into the inflammatory phase, cell proliferation phase, and tissue remodeling phase, and inflammatory reaction is the initial link of scar formation (28). After CJS, the anastomotic stoma was found to have repeated inflammatory reactions due to intestinal reflux. α-SMA was the most prominent marker for the development of myofibroblasts into hypertrophic scars and was mainly found in myofibroblasts (29,30). There were no myofibroblasts in the normal bile duct wall and only a few smooth muscle cells in the small vessels around it. Myofibroblasts are cells with characteristics of both fibroblasts and smooth muscle cells, mainly transformed from fibroblasts due to local stimulation. Zhang et al. found that, in the early stage of the healing process, α-SMA-positive cells appeared in all layers of the bile duct wall after end-to-end anastomosis of the common bile duct in guinea pigs, mainly concentrated in the muscular and intimal layers, and myofibroblasts proliferated obviously at the same time; however, at 6 months after the operation, the number of α-SMA-positive cells decreased (31). We also found that in the early stage after CJS, α-SMA cells were highly expressed, which reflected that the anastomotic stoma was stimulated by inflammation; fibroblasts proliferated actively and gradually transformed into myofibroblasts. With scar hyperplasia’s stability, the expression of α-SMA decreased gradually, and the pathological staining of the common bile duct wall showed that α-SMA staining gradually deepened with time.

TGF-β1 is known to be the most closely related cytokine to scar formation in the body. A variety of cells can secrete it, especially activated inflammatory cells (32). TGF-β1 can act on fibroblasts through paracrine, autocrine, and other biologic pathways to participate in the process of wound repair (33,34). It can directly stimulate fibroblasts, promote their proliferation, and then convert them into myofibroblasts to form scars; however, it can also activate fibroblasts originally in the quiescent stage and promote the formation of the collagen matrix. It plays an important role in inhibiting the collagen matrix decomposition, resulting in scars’ continuous accumulation. TGF-β1 also plays an important role in linking inflammation, injury, and scar of tissues and organs (35,36), providing the necessary signals for the whole healing process of tissues and organs. Once the expression of these signals is abnormal, it will lead to poor healing and scar formation. Siqueira et al. showed that the proportion of collagen and TGF-β1 in the common bile duct wall of pigs after end-to-end anastomosis was significantly higher than those in the control group (37). In our research, we also found that TGF-β1 was highly expressed in the early stage after CJS, and the expression increased gradually with time. Pathological staining of the common bile duct wall showed that the yellow staining granules of TGF-β1 staining gradually increased with time.

During the process of tissue healing, once fibroblasts begin to proliferate widely and even reach the stage of tissue remodeling, it is difficult to regulate and block the formation of scar tissue (38). Through Masson staining, we found a large number of collagen fibers and smooth muscle fibers in the anastomotic stoma 1 month after the operation, and the fibers were disorderly and broken. The characteristics of scar formation in CJS are as follows (39-41): inflammatory cell infiltration and fibroblast activation appeared in the early stage of anastomotic stoma healing; with time, infiltration of inflammatory cells in the anastomotic stoma was gradually aggravated, fibroblasts and myofibroblasts proliferated, and collagen fibers and smooth muscle fibers increased significantly, and eventually led to the proliferation of granulation tissue and scar formation. If an early intervention can reduce the anastomosis’s inflammatory reaction and the activation of fibroblasts, it could prevent CJS scars’ formation. Therefore, the rat Roux-en-Y CJS model established in the present study provides a good basis for follow-up research.

The rat Roux-en-Y CJS model is in line with the clinical condition and has a good application for the study of CJS scar formation. Scar formation following CJS in rats is characterized by the activation of fibroblasts caused by early inflammatory stimulation, which leads to the proliferation of collagen and smooth muscle fibers, finally forming a scar.

Funding: The present study was supported by the Beijing Natural Science Foundation (Grant No. 7194274).

Conflicts of Interest: All authors have completed the ICMJE uniform disclosure form (available at: http://dx.doi.org/10.21037/atm-20-5135). The authors have no conflicts of interest to declare.

Ethical Statement: The authors are accountable for all aspects of the work in ensuring that questions related to the accuracy or integrity of any part of the work are appropriately investigated and resolved. The study was performed under a project license (No. 2019-D.-304) granted by the Ethics Committee of Beijing Chaoyang Hospital and complied with institutional guidelines for animals’ care and use.